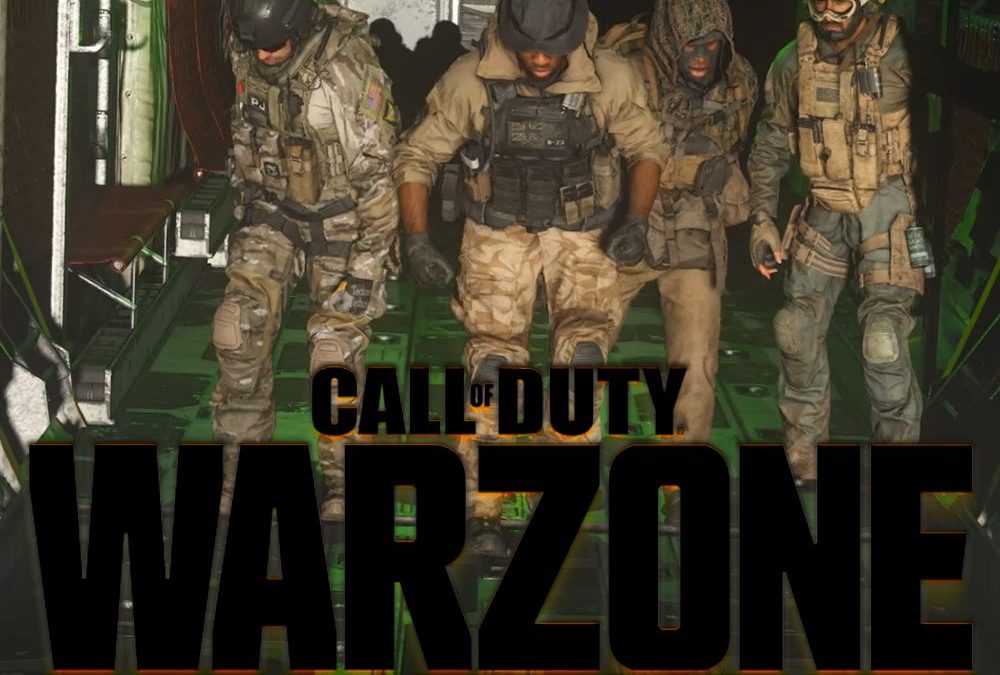 From Battlefield to COD

Call of Duty: WARZONE where does one start. Well I will start with this is my first time stretching out my fingers for a game article so bear with me here! Really though how does a long term hardcore Battlefield player start writing about a game like WARZONE? Really though I own hard copies of BF2 and BFBC2 and almost every digital release (1942, 2142, BF3, BFHardline, and BF4). We do not need an EA history lesson to remember how BF4 launched and what followed after, I just stopped buying the titles at a certain point, but up until then I deeply enjoyed the large maps and 64 players in them more than any other games pretty much ever until Battlefield 1 released. I had mixed feelings about the direction of BF1 and BF5 sealed the deal for the time being and I found myself in need of something new, something fresh, something I have not tried on PC pretty much ever.

So here sat Activision and the COD franchise and for years the goofy antics that many loved about its games are exactly what kept me away, things like the gadgets, killstreaks, and tiny maps with places to pop out pretty much anywhere very fast. There was just so much I did not enjoy about Call of Duty titles after MW3 and even at that I have not until Black Ops 4 bought a single Call of Duty title (this was my first dip into COD on PC and I needed it), rather opting to just enjoy them with friends on the rare occasion in their living room on a console. This was fun among a group of friends but that was about the extent of my COD gaming adventures for many years.

Fast forwards to today and Warzone hits the scene, I don’t think anyone was ready for what was being done here. An (FTP) or Free To Play title released alongside Call of Duty: Modern Warfare 2019. Last I saw 60 million gamers are grinding it out in Warzone and that is rather amazing. Including myself, though admittedly I am not there for the Battle Royal but rather Blood Money. The Blood Money mode has been the most fun I have had in a First Person Shooter in a long time. No gulag to deal with, no tiny map, freedom to move about and play the game how you think is best to achieve a victory. So let us break this mode down some and take a look at why I find this to be the best FPS experience in my opinion at the time.

All of the images in this article can be left-clicked on to make larger and or right-click and open in a new tab for full size. 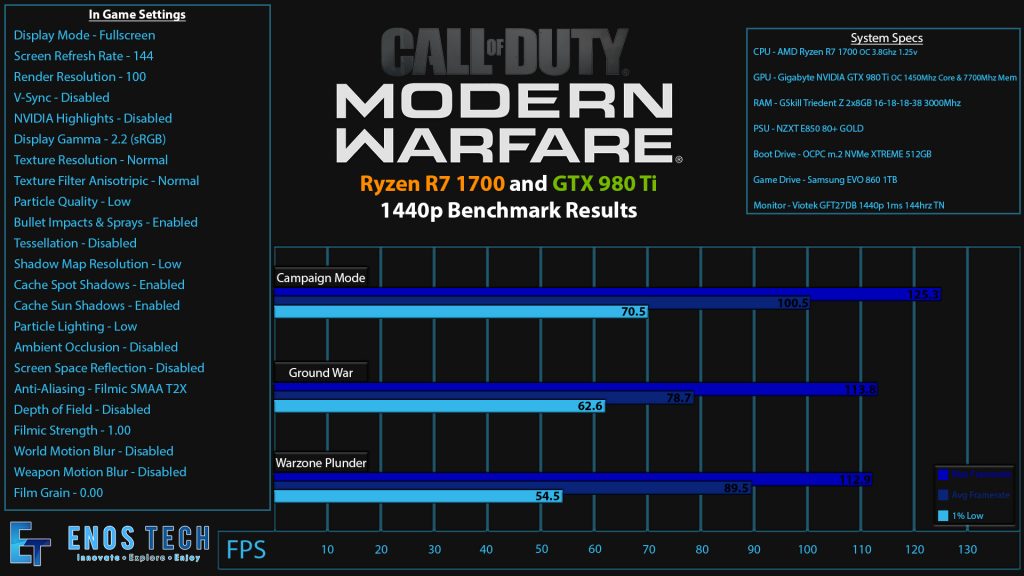 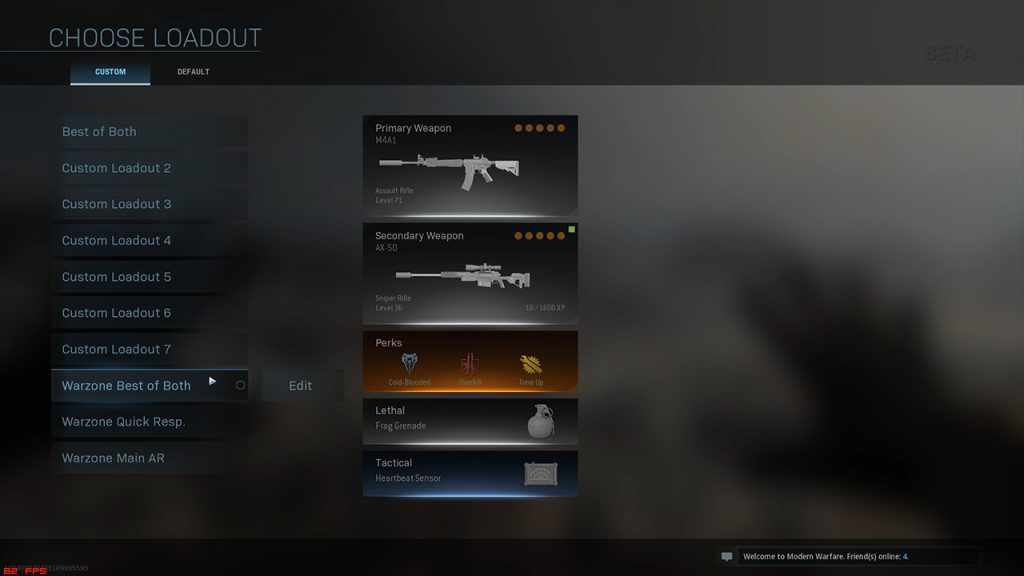 Selecting a load out.

Warm-up time, get XP for kills here while practicing. 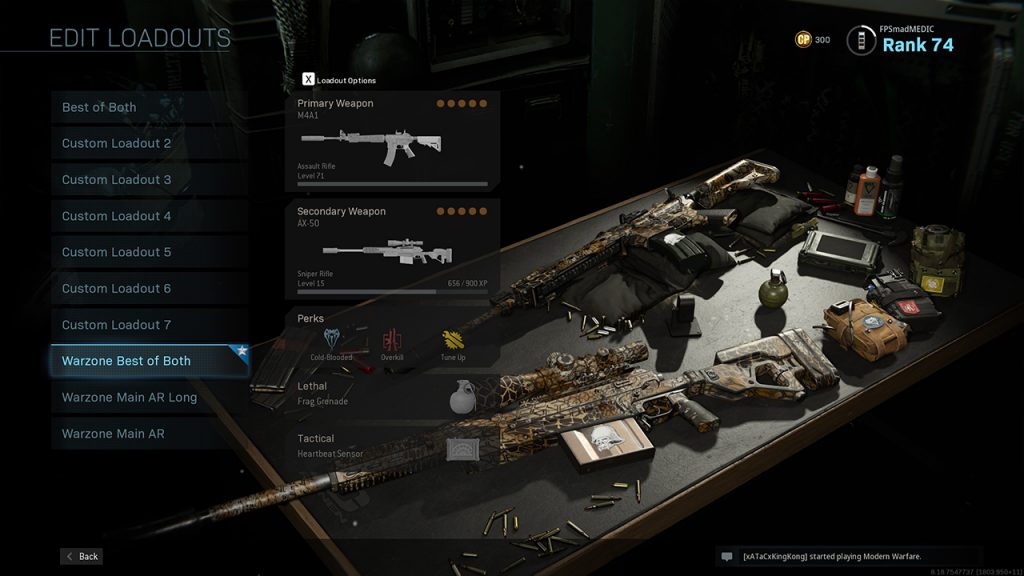 My Load Out of Choice. 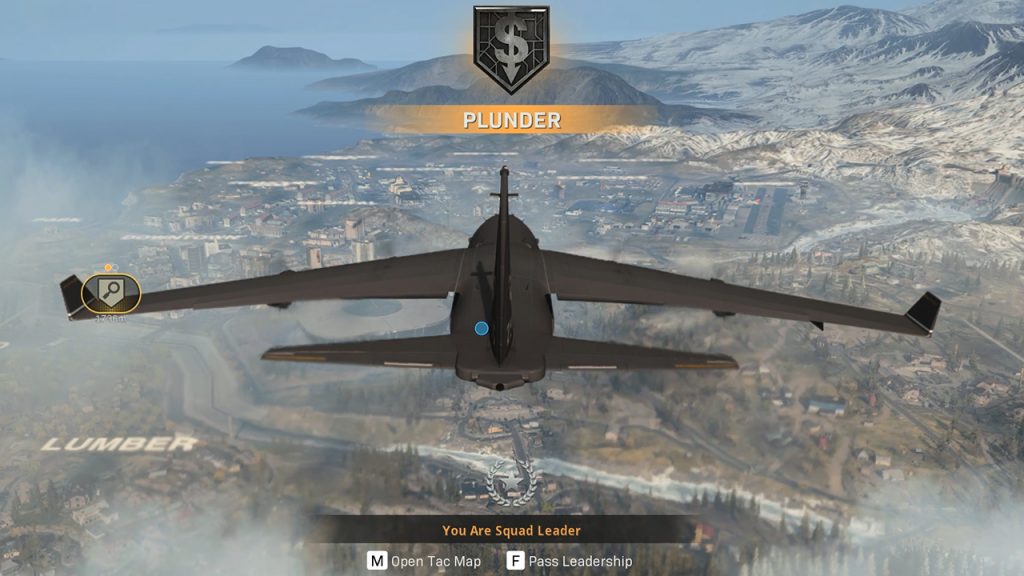 Time to drop in! 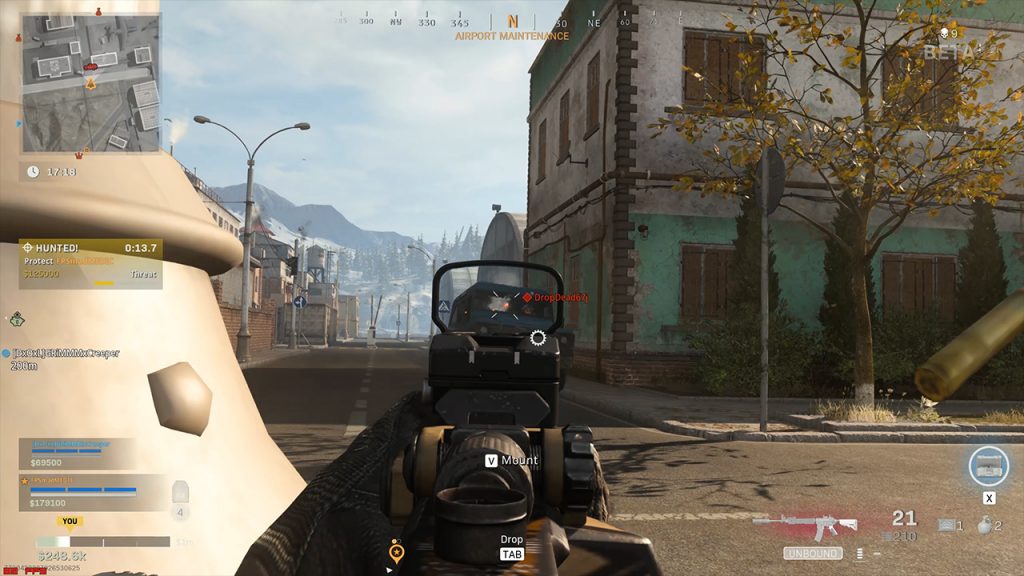 Watch out for drivers they are annoying.

So let’s start with how does the game run, my system specifications, and game performance. I took the time to get the best measurements in the Campaign, Ground War and Warzone Plunder, or what is now Warzone Blood Money that I could, consistent benchmarks are hard to get in massive multiplayer game modes. The two main bars here we want to pay attention to are the 1% Low and Avg Framerate being that shows the framerate you are going to see more often than not. As you can see Plunder (Blood Money) takes the largest hit here but that might be just down to a larger map than Ground War and more players coming into contact in those areas. All in all the entire Warzone experience is surprisingly well optimized considering I am running it on solid visuals at 1440p on a GTX 980 Ti.

Getting to choose your loadout is very nice and something you want to work on building up because at the start of every match you get to pick and start with your chosen loadout. Ultimately how you decide to set your kits up all comes down to your playstyle and needs you want to fill in a given mode, so just experiment and find what suits you best. My preferred kit aptly named “Warzone Best of Both” I find that with an M4A1 I can handle close to medium range all day and even manage a few long-range downs as well. And then I use the AX-50 with the 5x/12x variable scope allowing me to reach out there for those extra long shots and cleanups.

After a 60 second warm-up mode that you get to drop in and use your kit as well as gain XP for any kills for the weapon used. You are flown in on a plane with your team and drop in. There are lots of places to choose from and you can be shot down or shoot other players down while still dropping in from the air! So be careful and get to the ground quickly.

Some Tips and Things To Look Out For 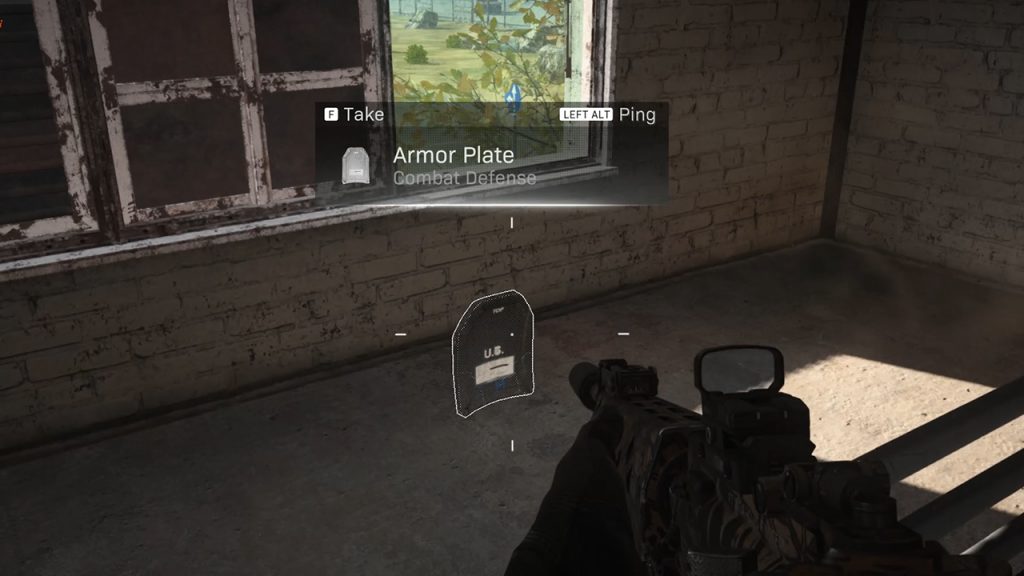 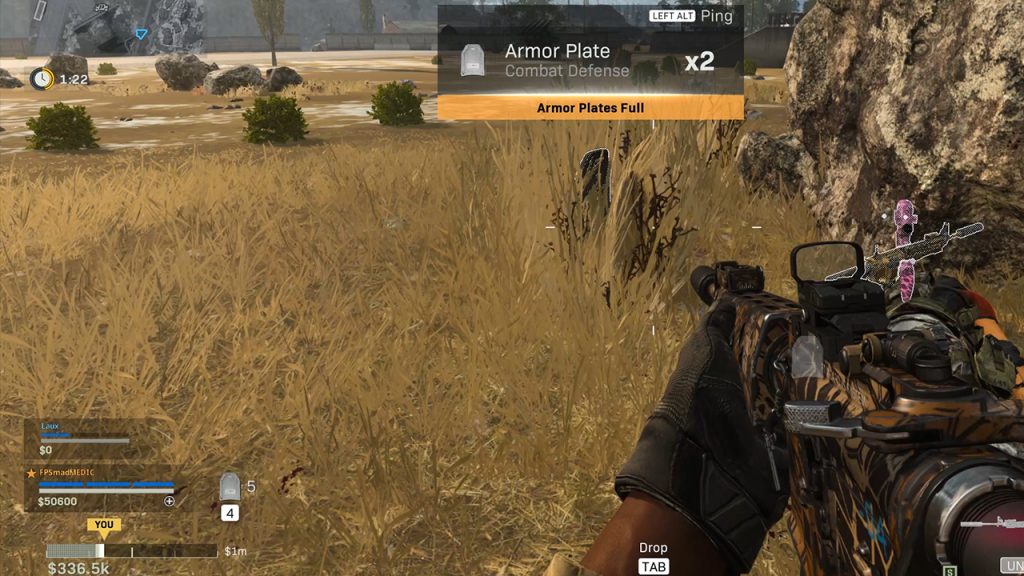 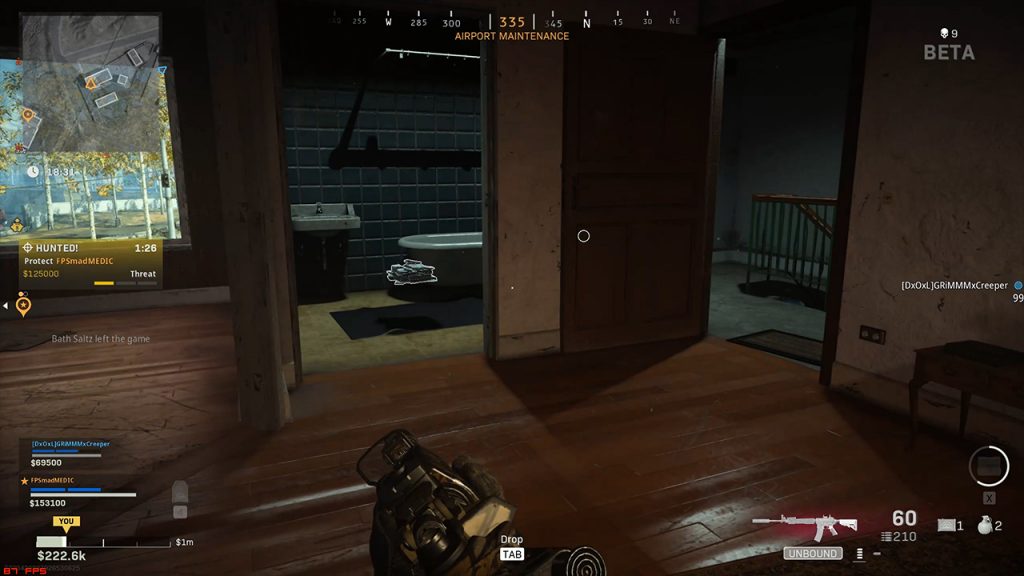 Get as much money as you can, it is hidden everywhere. 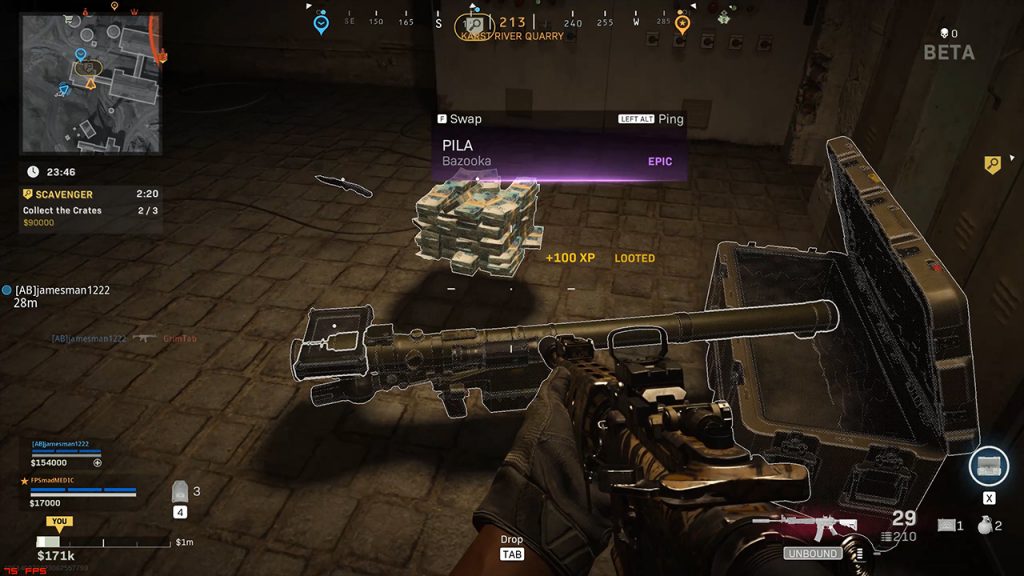 Hit as many Supply Boxes as you can for extra cash. 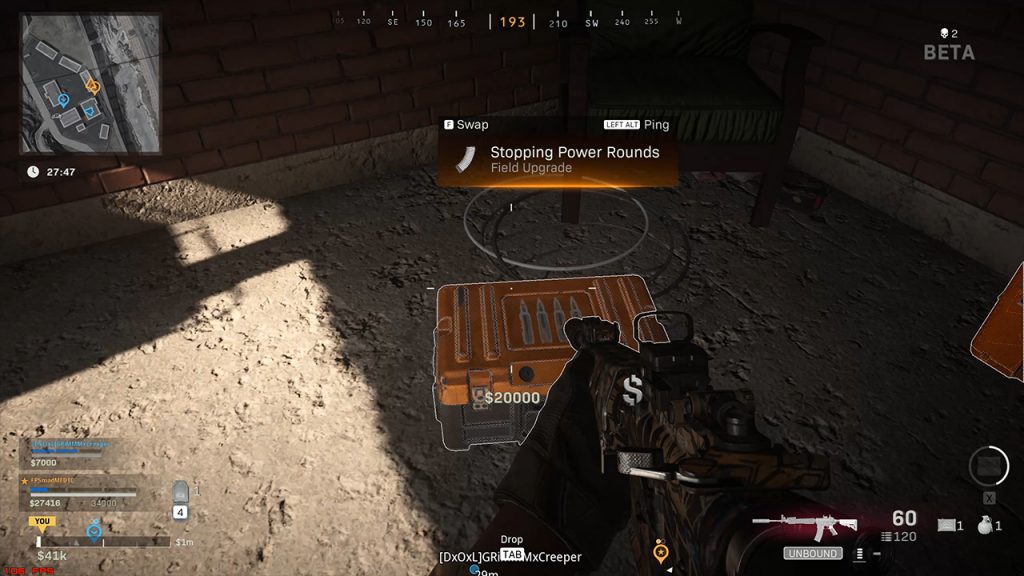 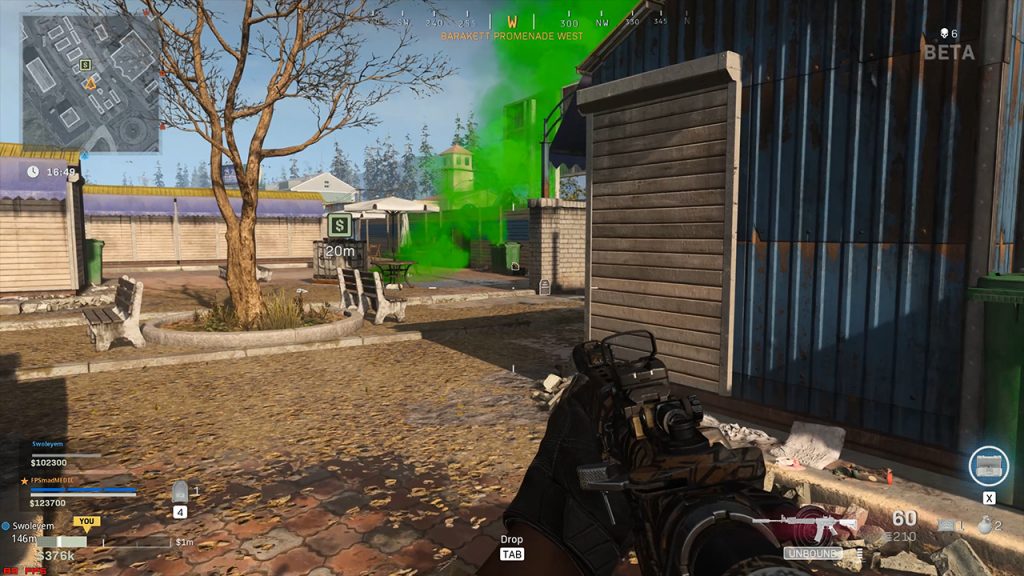 Cash Drops are high risk, high reward, and totally worth it. 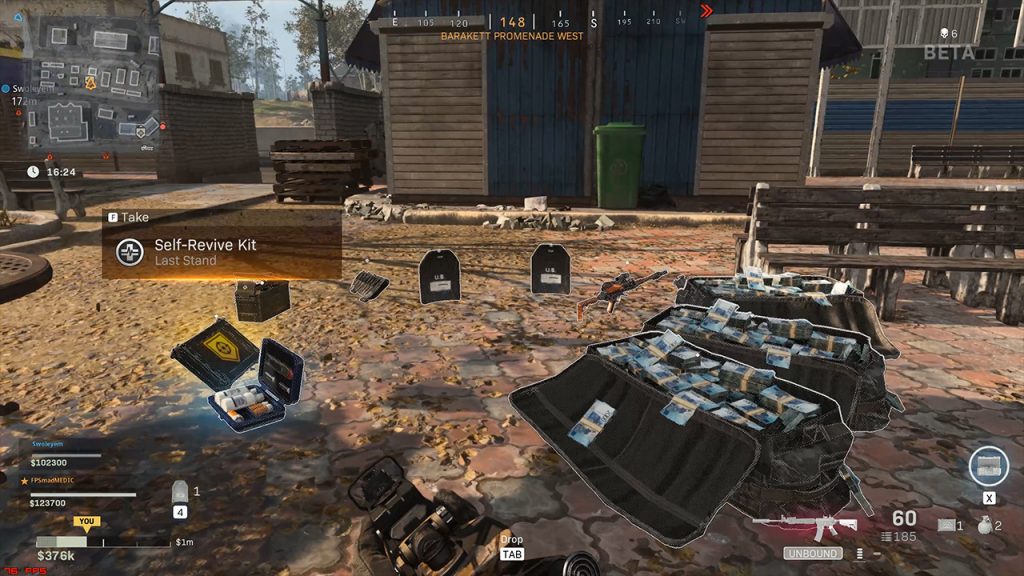 Look at all that Cash Drop Loot! 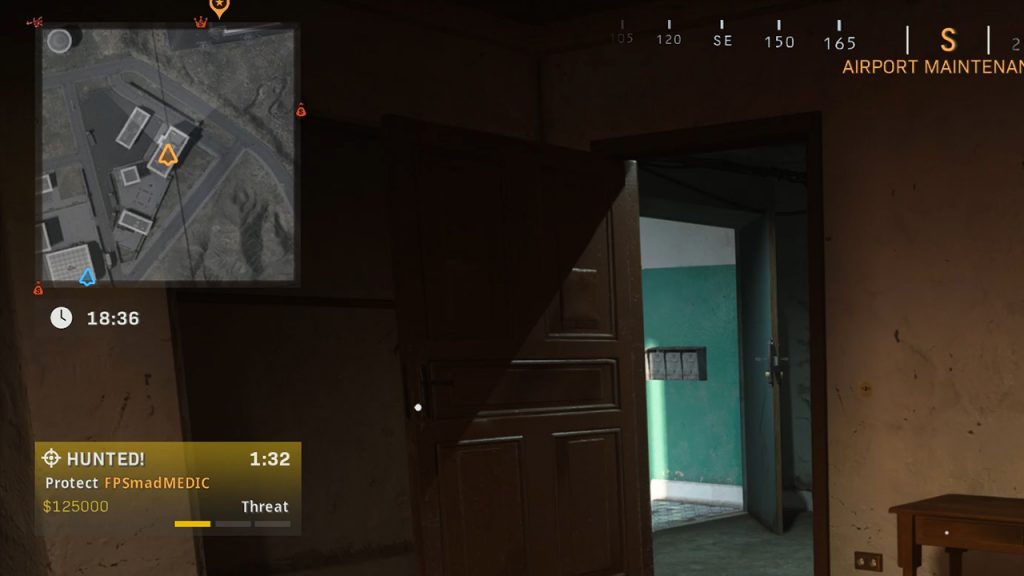 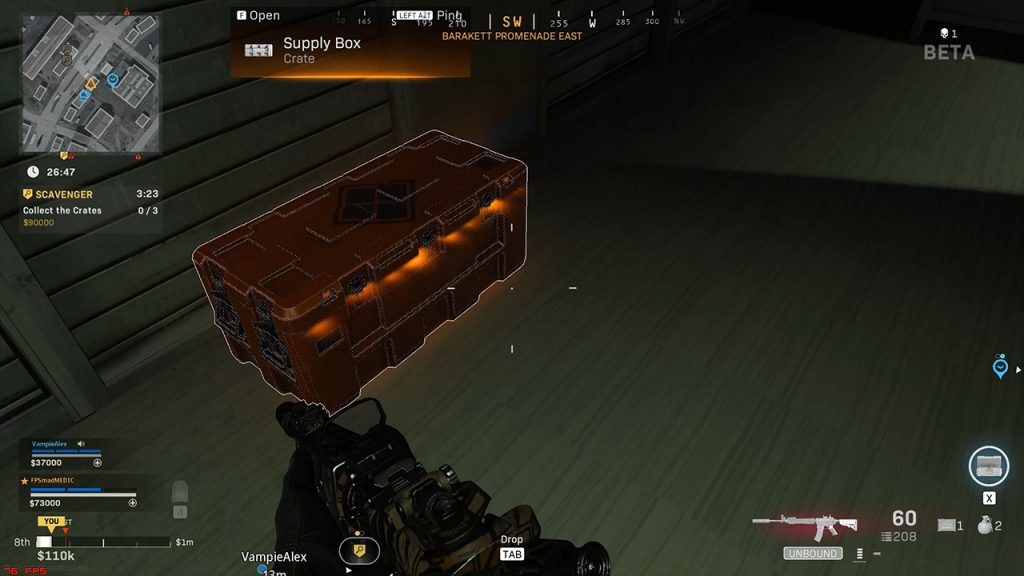 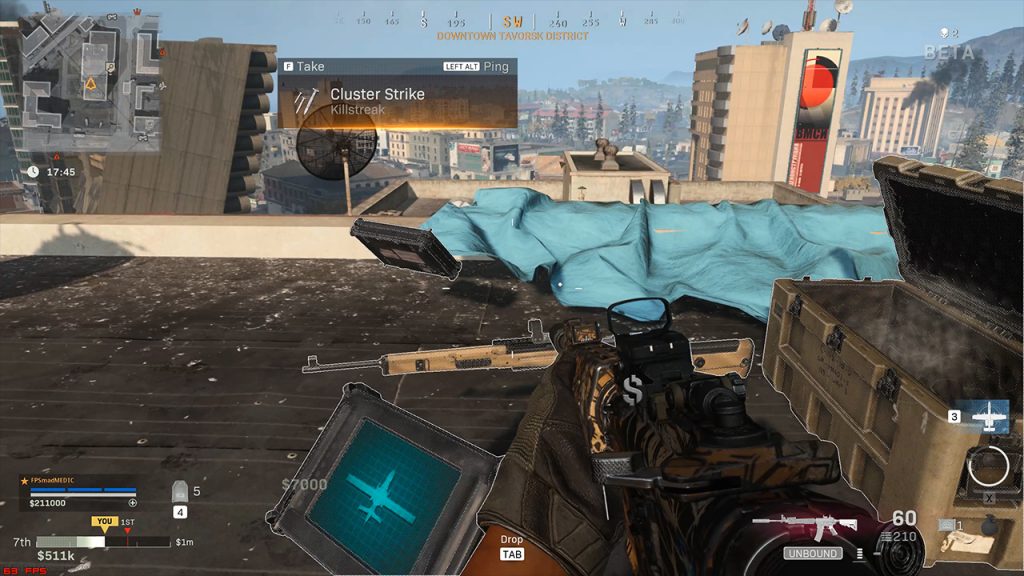 Kill Streaks can be found in Loot Crates as well. 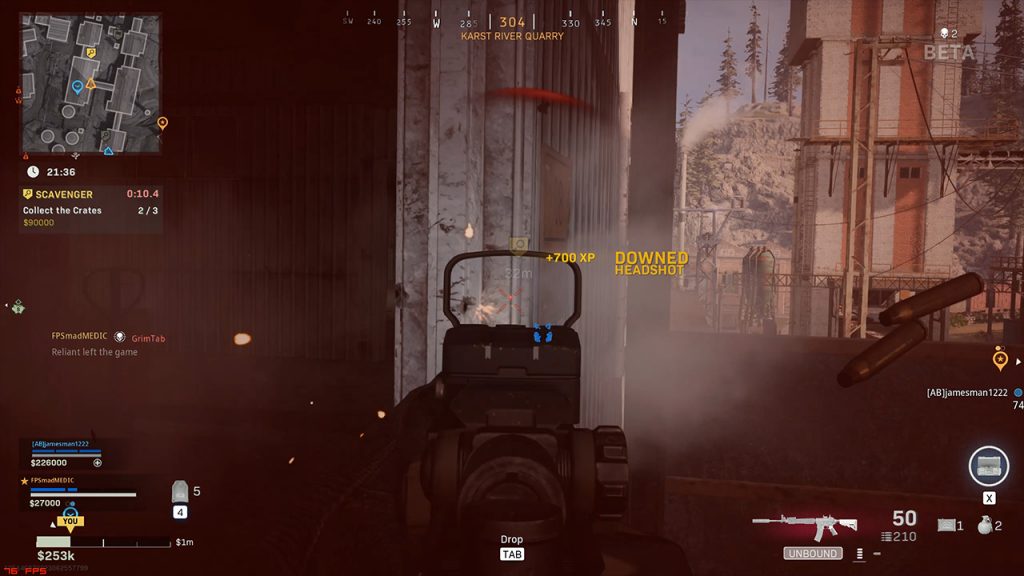 Wallbang, the term for shooting enemies through the wall in Call of Duty. 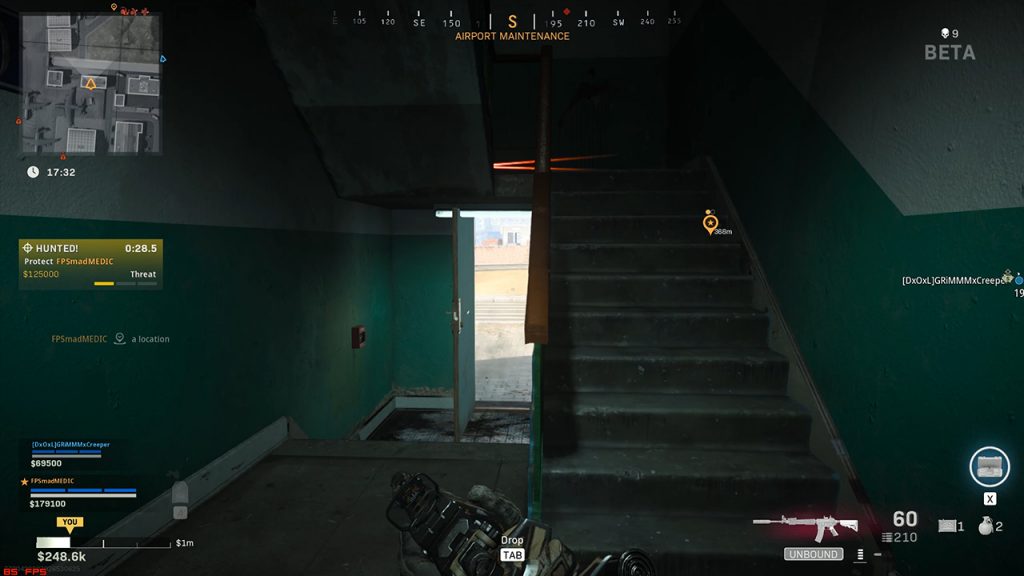 Sneaky stair traps are the worst. 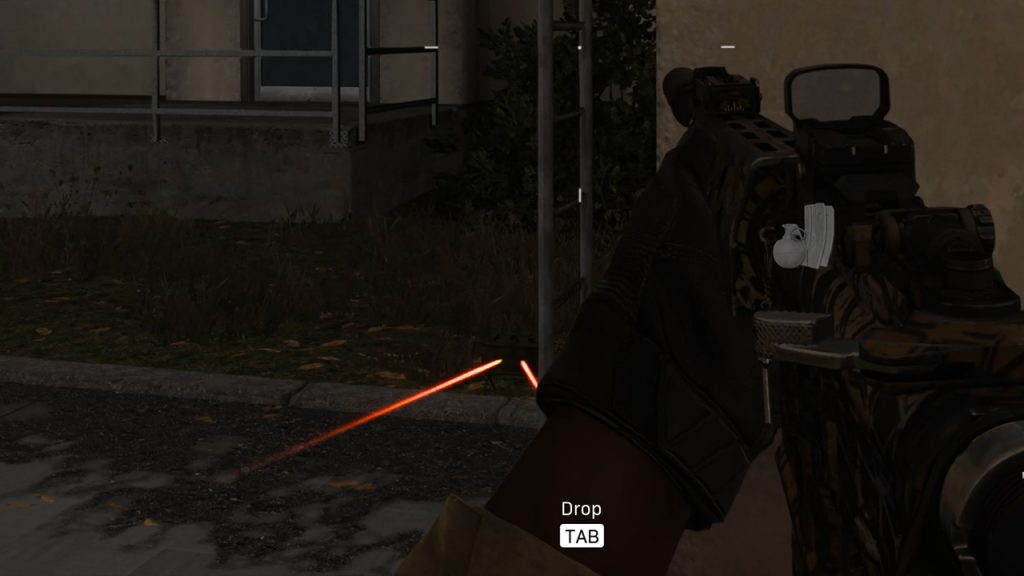 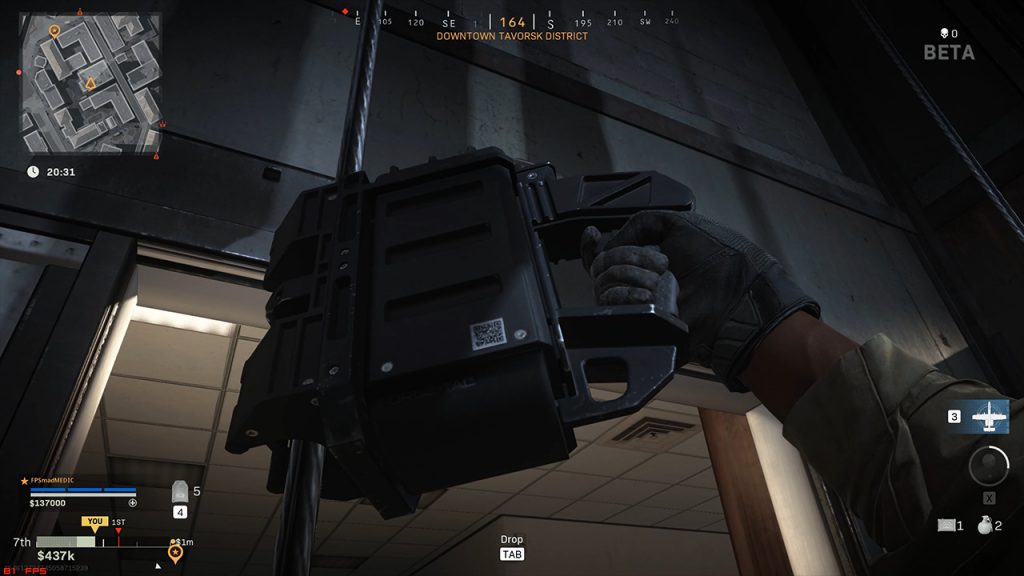 Elevators have lines you can quickly zip to the top on. 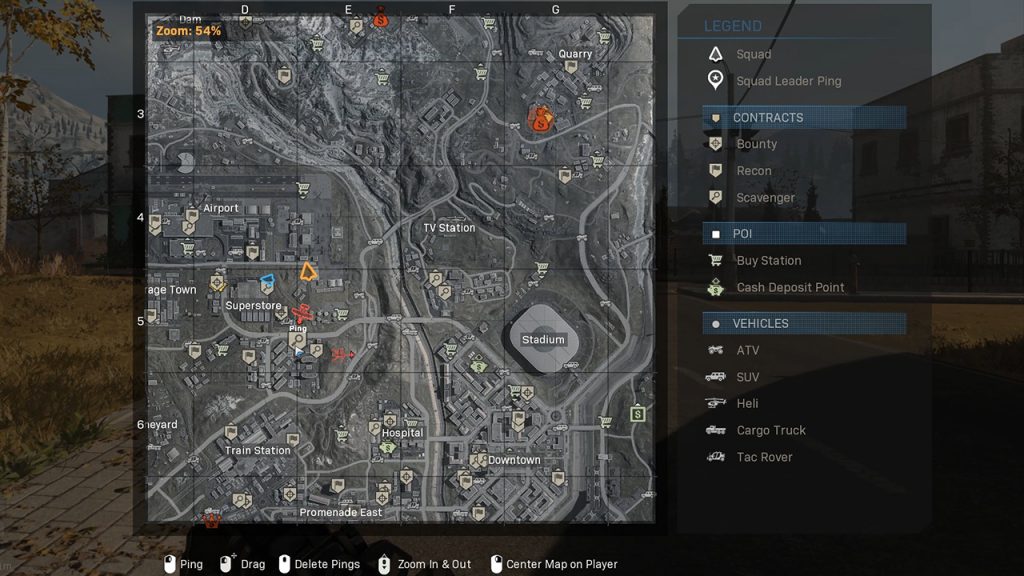 Blood Money takes place on the same Verdansk map as the main event Battle Royal mode, but there is no circle, Gulag and infinite respawns after about 30 seconds after each death. The main goal is to gain a boatload of money which can be done in several ways. Loot Crates and random cash pickups, and Contracts are the way to start and then the main events are Enemy Attack Choppers which drop Cash Drops and random Cash Drops as well as dominating your enemy and taking their cash.

Loot Crates, Cash Drops, and more, I have found that if you want to drive for a win it takes a team working together. I have found the most success in hitting as many Loot Crates as possible while trying to complete a contract or two early-game and then moving into pure fight mode mid-game on is one recipe for success. You can do everything from shooting down Attack Choppers which then drop a Cash Drop with a large amount of money to raiding enemies as they try to offload their cash the options are pretty wide and open for you to decide on.

A few pointers to take into your Warzone gameplay.

Below is a good example of how having plates and a good position in a fight can win. 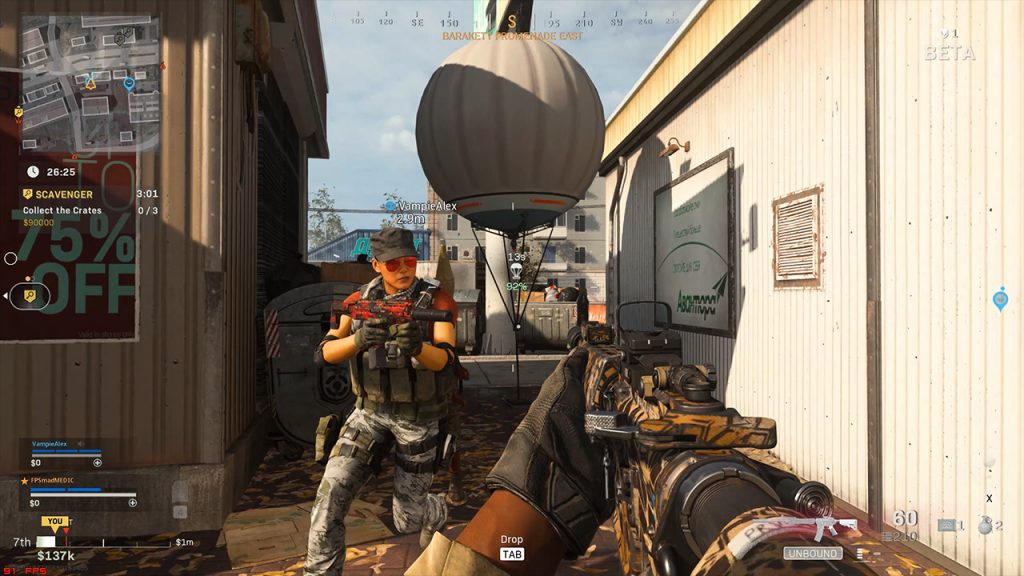 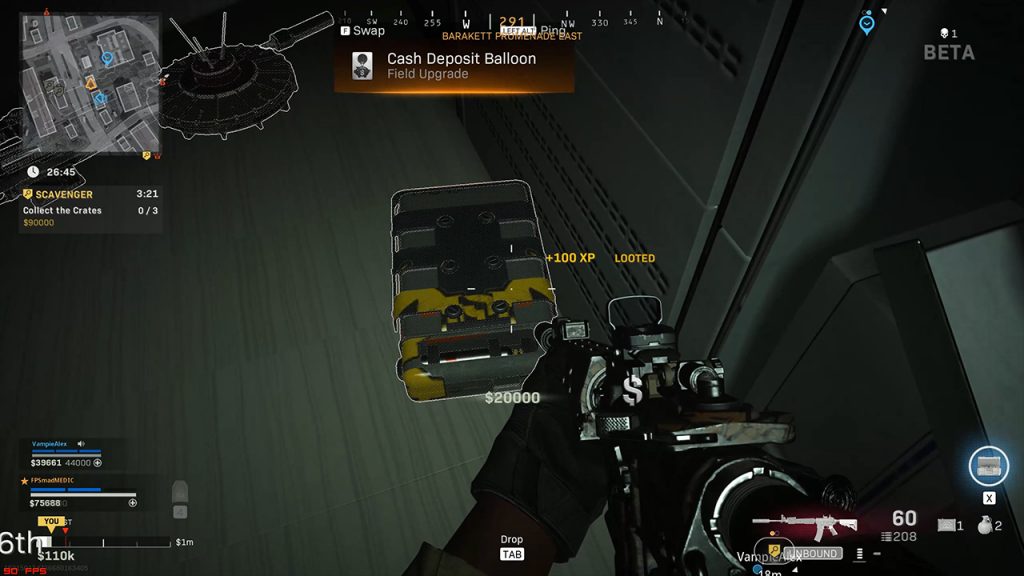 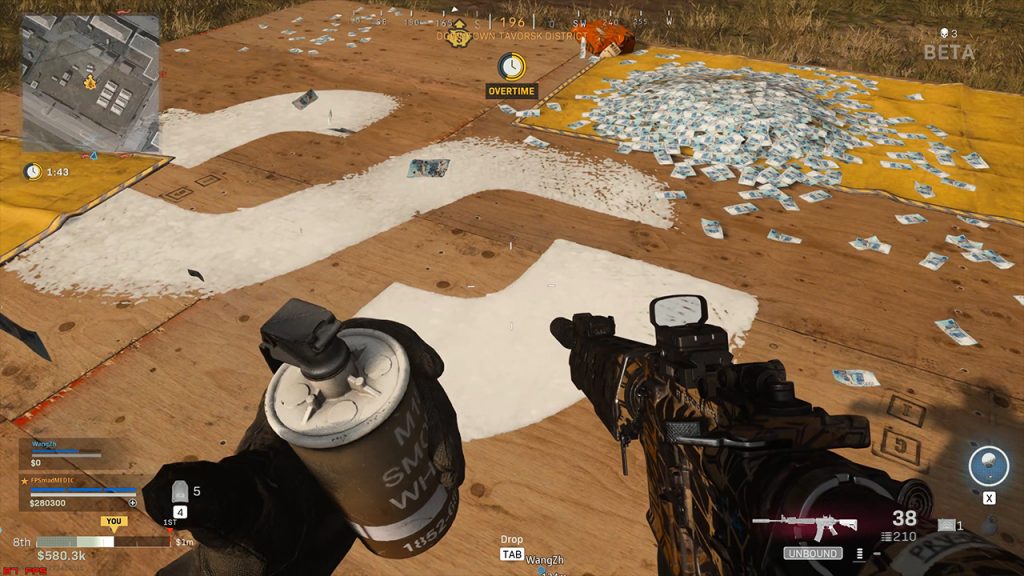 Calling in a Cash Deposit. 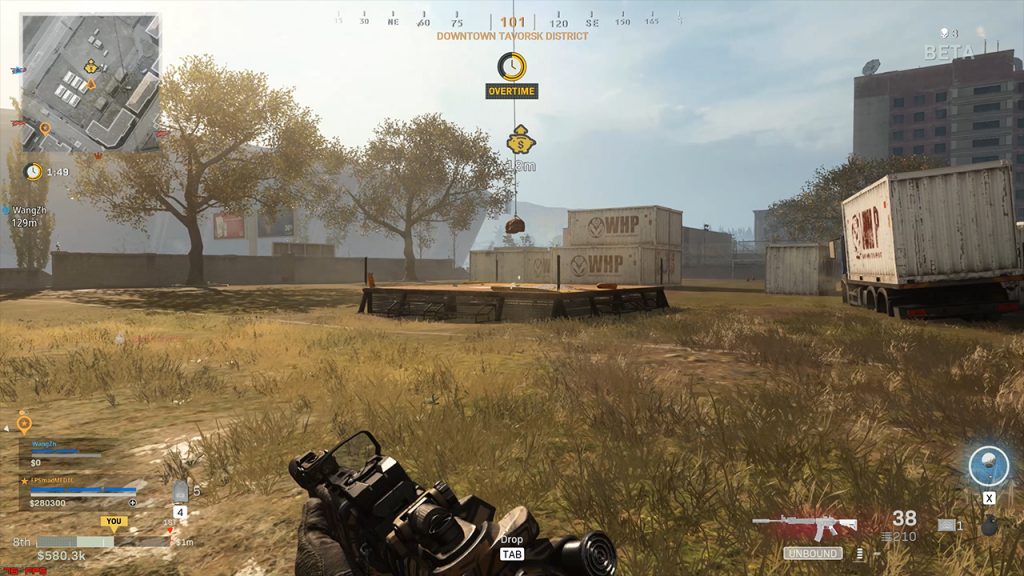 Drop every dime you have in a Cash Deposit.

Depositing money is just as important as getting it, depositing keeps it safe from loss when you die. The more money you carry the more risk your death carries for your team because every time you die you drop a percentage of your cash and feed the enemy. There are two ways to get cash safely deposited, the first is a Cash Balloon and it can be either randomly found in a Loot Crate and or bought for 30k at a Buy Station. Careful if you buy one though because they do recharge and are reuseable but once you die you drop the Cash Balloon for whoever picks it up to use. The other way to deposit your hard-earned cash is by calling in a Cash Deposit. This has all kinds of fun cause and effect tied to it when you do this everyone knows. Its most likely going to turn into one big fight for the money and whoever wins will get to deposit loads of hard-earned cash. 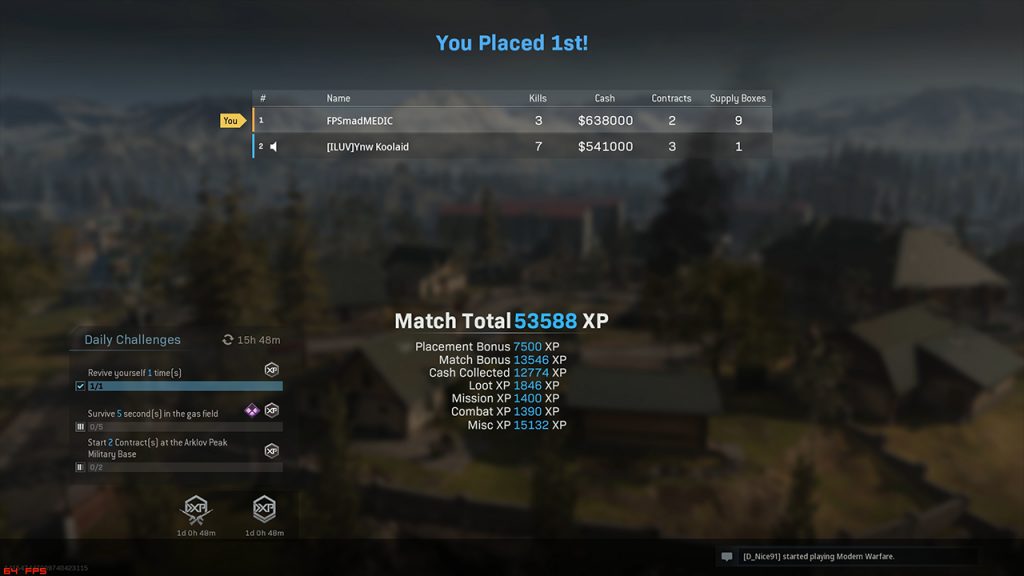 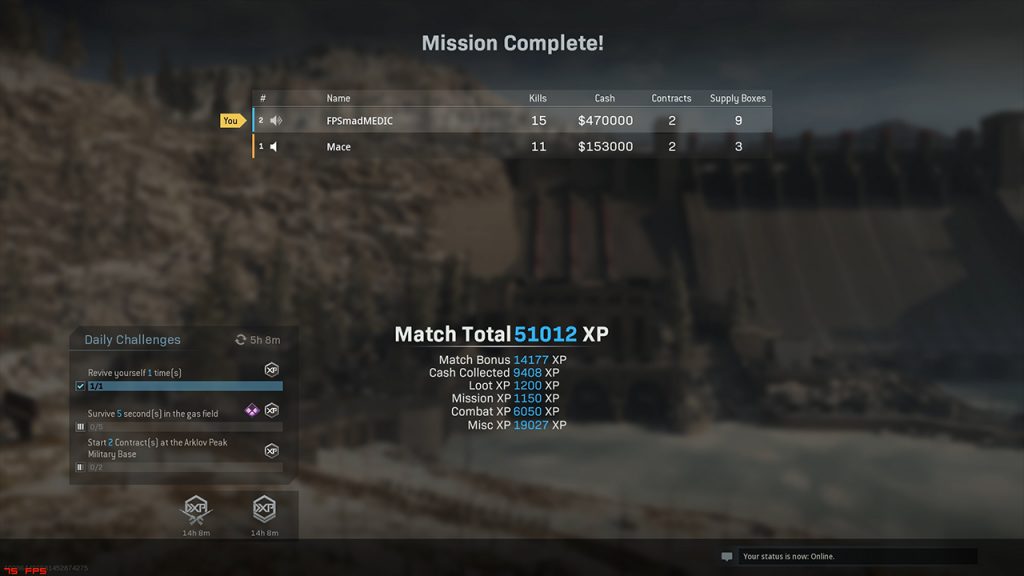 And the biggest pointer of all is do not let yourself get frustrated if you don’t get wins or place. More than anything I feel the Warzone Blood Money mode is just a good way to go have fun, grind XP for weapons and gear as well as practice gunplay. As you can see above one match my teammate and I went just outright kill hunting and I had 15x Kills, 2x Contracts and 9x Supply Boxes looted totalling $470,000 at the end of the match and didn’t even finish in the top 10. But on the flip side of things in another match, we went Top Earner and Contract hunting with my teammate and myself totalling only 10x Kills with 5x Contracts and 10x Supply Boxes looted and landed 1st because the teams we found at the end had all the cash.

In the end, like I said Warzone Plunder/Blood Money is just pure fun and a real blast to play especially when you get a strong squad. And in a time when EA is doing who knows what with their titles I needed something to play. Warzone fed me such a good experience that I went out and bought the full Call of Duty: Modern Warfare 2019 edition so I could see what Ground War was all about as well as enjoy what I have always thought was the best part of a COD title. . . The Story and it is good, no spoilers here though and I am still playing through it when I can.

If you have not yet gone and given the free offering from the COD franchise then I think you should, because it is a real treat for FPS gamers veteran or new to the scene and I am sure Warzone won’t disappoint. If you have tried Warzone comment below what you like and or dislike about the game, if not then tell us why not.