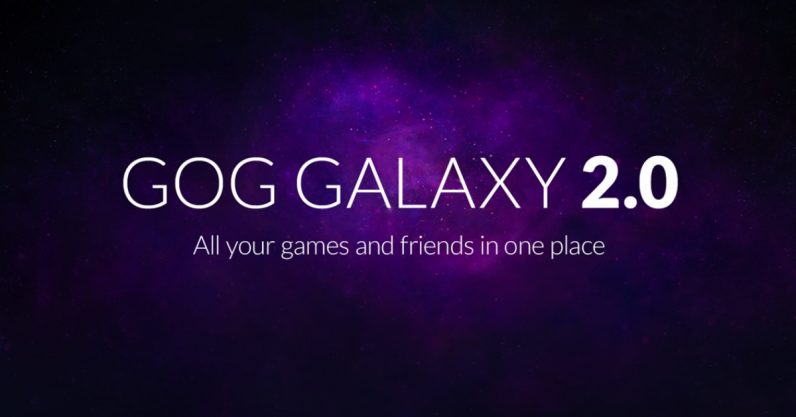 As a PC gamer, I have known about GOG for quite some time. So when I heard about GOG GALAXY 2.0 the new project of CD Projekt the creators of a very well known game called The Witcher III Wild Hunt I got rather excited. Being an old school gamer I like my DRM free games and remember a time when you didn’t need more than a legal copy of a game and maybe a server browser to maximize the available servers you could play a game on, (yes there are way more servers than games like the Battlefield series advertise in their server searches 😉 ). You did not need more than that, now I need Steam and uPlay to play Far Cry, Assassins Creed and even the Tom Clancy series just to name a few. Now I know GOG isn’t there as of yet but by what I understand they are working on setting up GOG GALAXY 2.0 as a single launcher for all of your connected accounts and their launchers as a long term goal. . . Let us let that sink in for a moment. No more needing to open more than GOG once your games are installed and set up. Considering the number of launchers being put out there with their “live service” games attached it is getting rather annoying keeping track of and installing everything you might need.

I have spent a few weeks getting to know the new GOG GALAXY 2.0 launcher and it has honestly been fun to explore and play around with just the launcher. I used to just put my “The Witcher III Wild Hunt” game folder where ever I wanted and just launched the game with a shortcut from the executable. Now I want GOG GALAXY 2.0 just to see what is changing and to use, support and report bugs on a launcher I am truly excited to see reach development goals.

Here on the Recent tab, you are introduced to a few things, Recently Played By Me and Recently Played By Others. This is a nice feature, helping you keep track of friends and clan members to catch each other for some game time. Below that there are a few stats that get tracked in a Monthly Summary, those being games added, achievements and hours played. 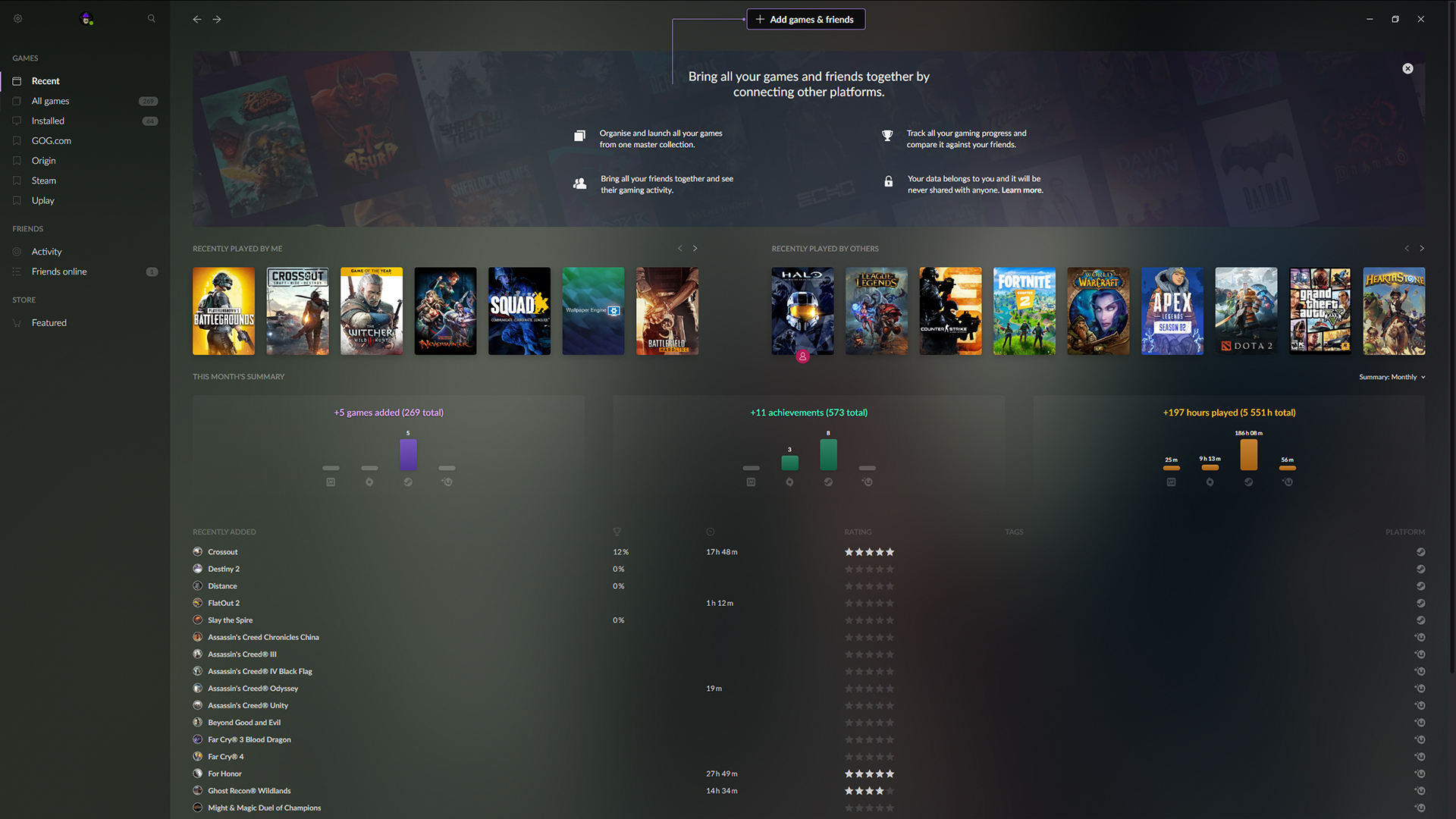 There really was almost no missed game, outside GTA V which I had to manually add. Here are fingers crossed for Rock Star launcher and others making it onto the GALAXY 2.0 platform. 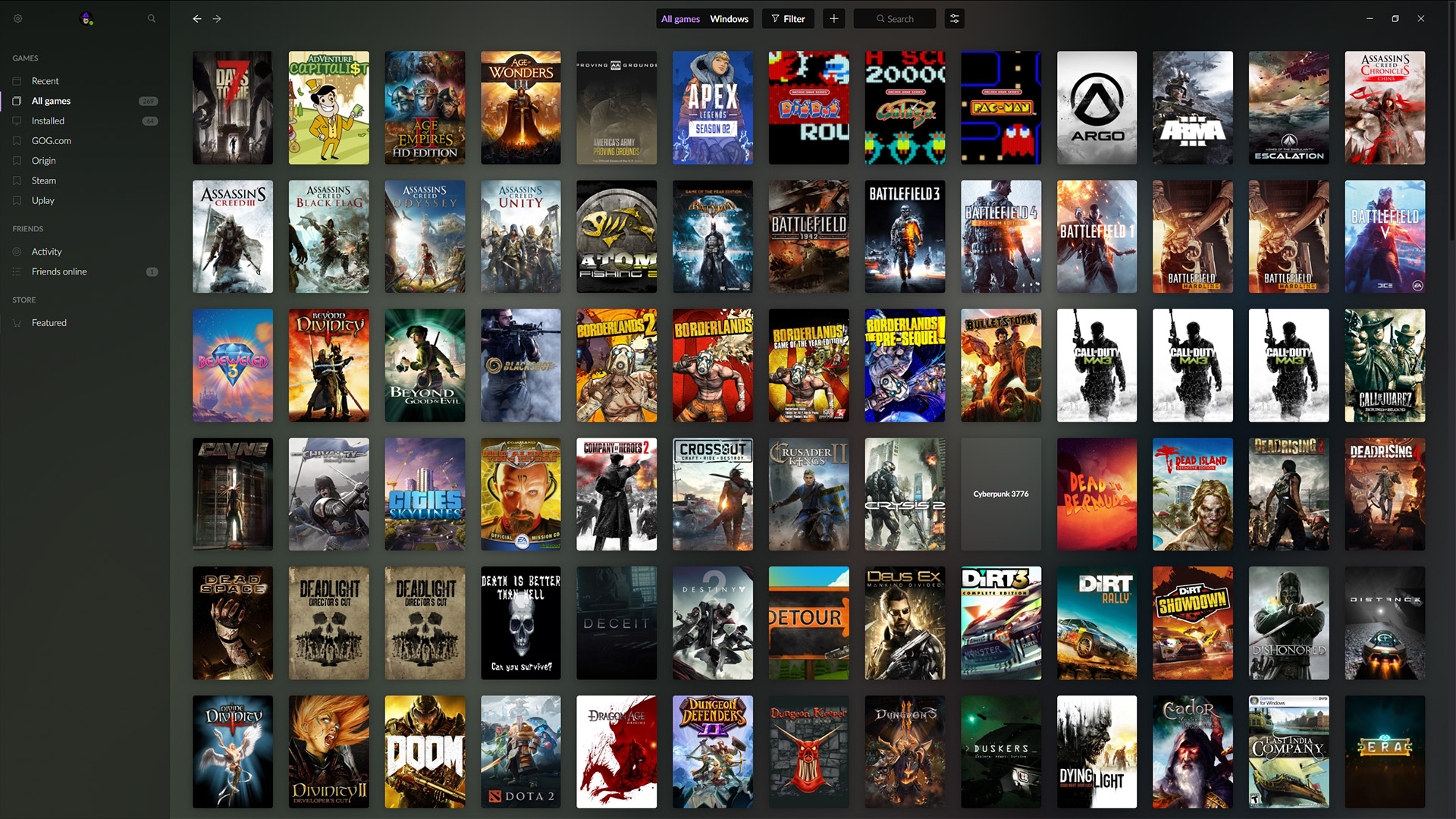 GOG’s store can still be found down at the bottom of the list here on the left of the program. GOG is very well known for DRM free games, you buy them you own them plain and simple, and as an old school PC gamer myself this is just Creme De La Creme of gaming right here. Well, known DRM software like Denuvo destroys performance on a major level and it is really nice having a game that is not being slowed down like trying to swim in a pool of molasses. We all are also very aware of just how ineffective DRM really is. Its software and if someone wants to write code to get around stuff they will find a way, lol where there is a will there IS ALWAYS A WAY. Many games of the past have had some really creative ways of dealing with piracy which we are not diving into here that’s a whole new subject article in itself. Point is DRM free, leaving your system free to process and render your game to its max capabilities unhindered by a list of checks. 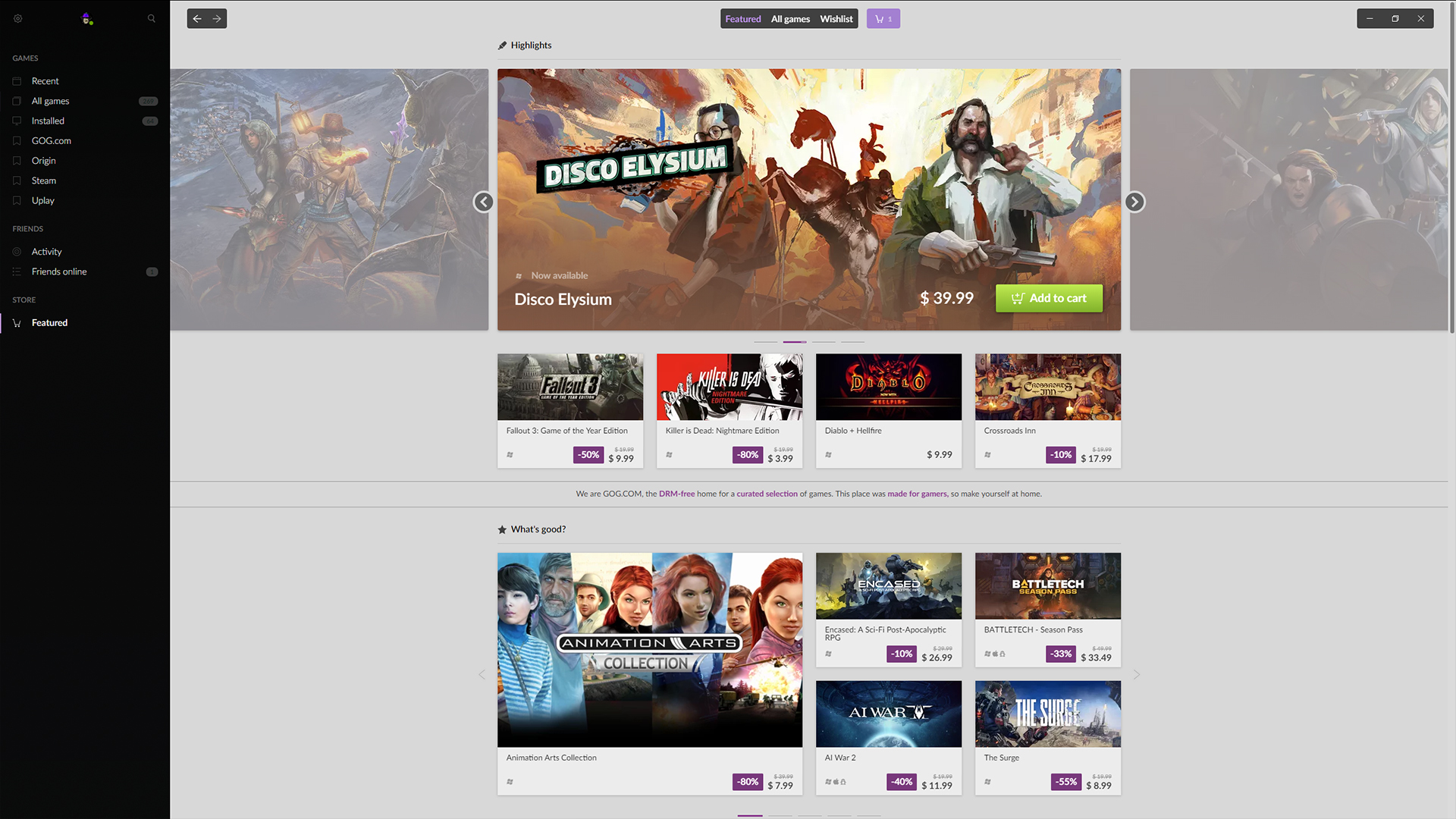 GOG GALAXY 2.0 enables you to list view your games, and much more, you can sort by Title, % Completed, Time Played, Your Star Rating, Personal Tags and even Platform! 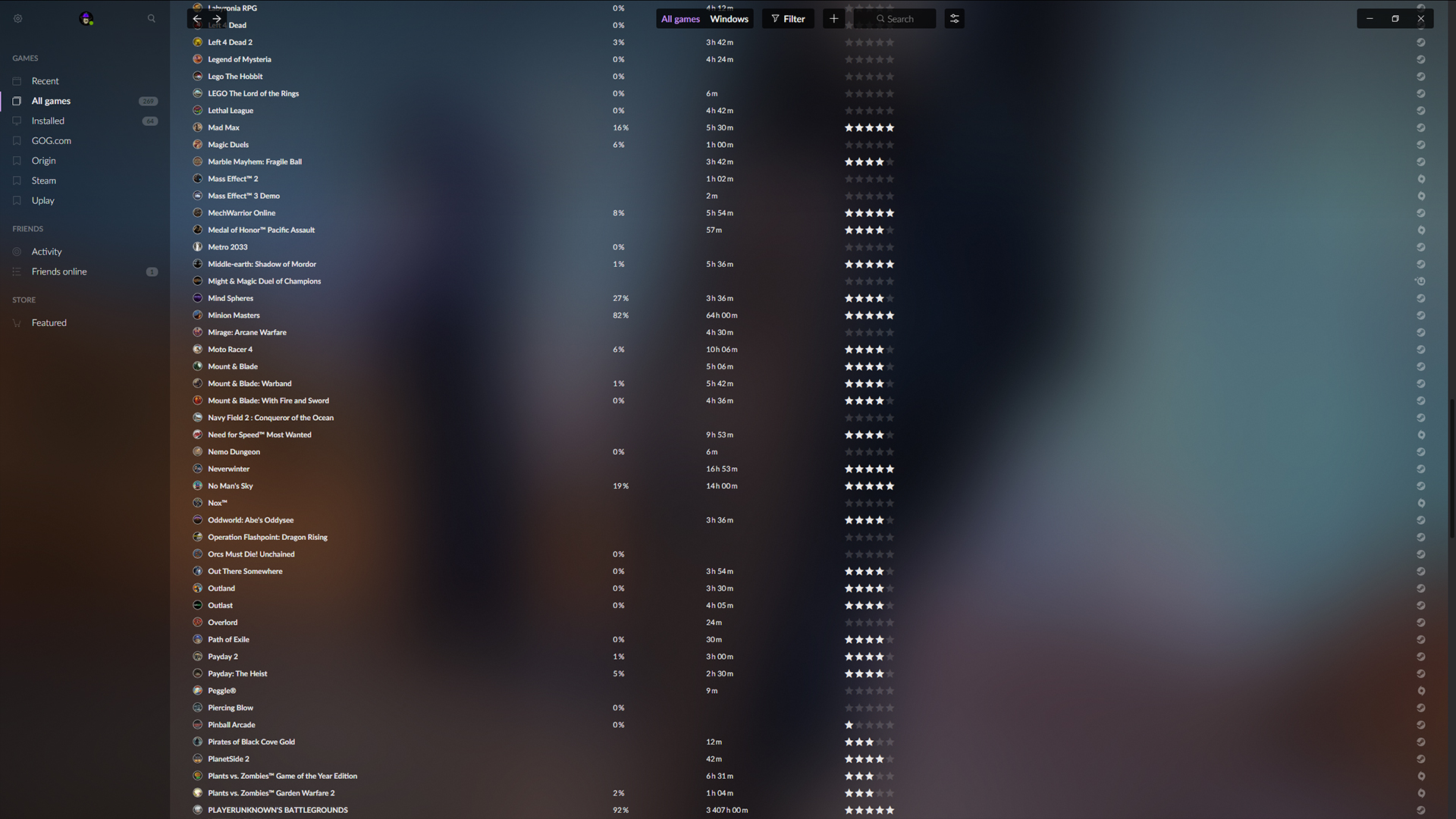 Sorted by rating for example, with a TAG added in. 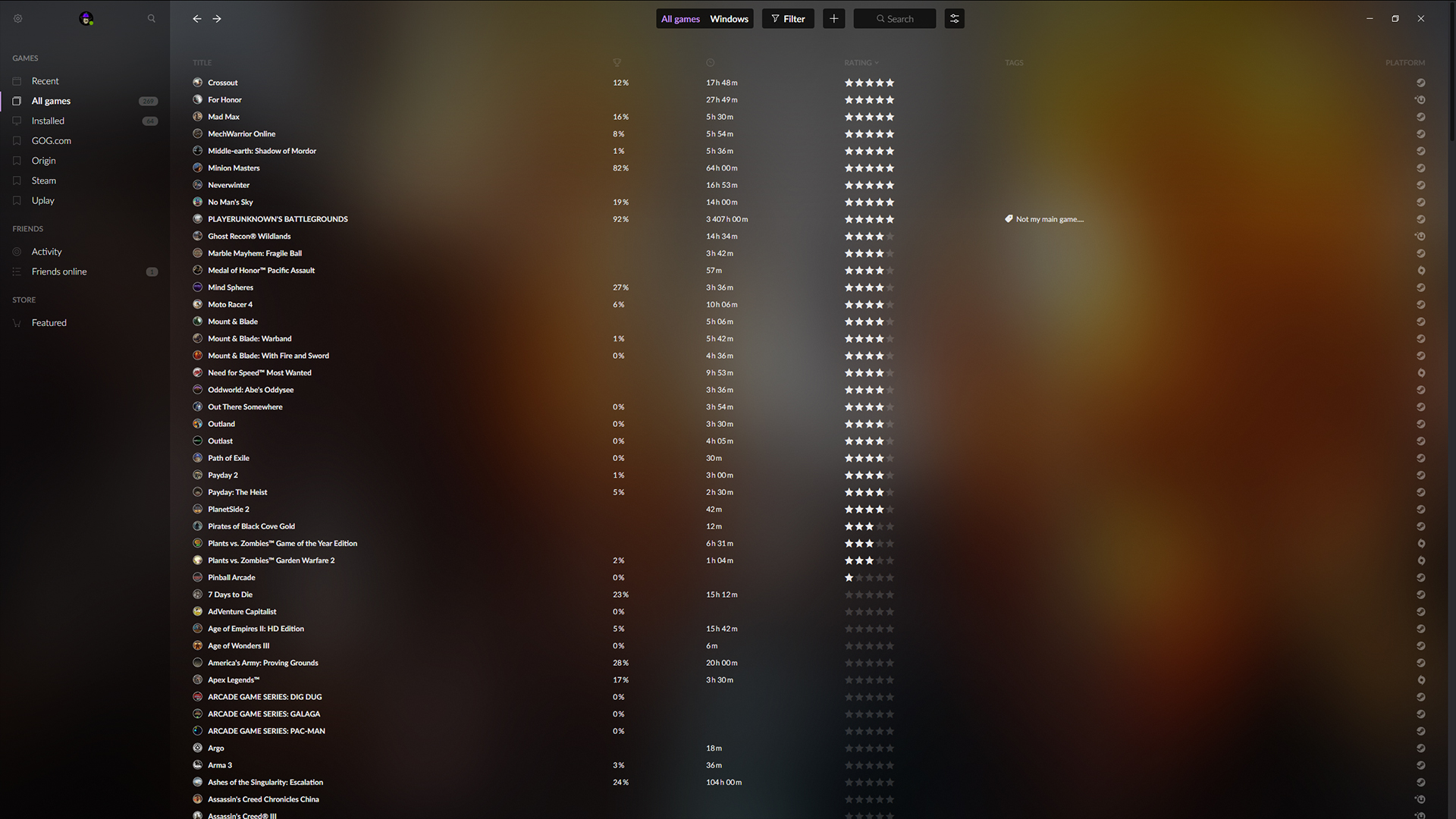 Hopping into the settings you will need to go here to Integrate your platforms into GOG GALAXY 2.0. So far GOG has added in support for the obvious GOG plus Xbox Live, Epic Games Store, PlayStation Network, Steam, Uplay and Community/Manual Integrations. 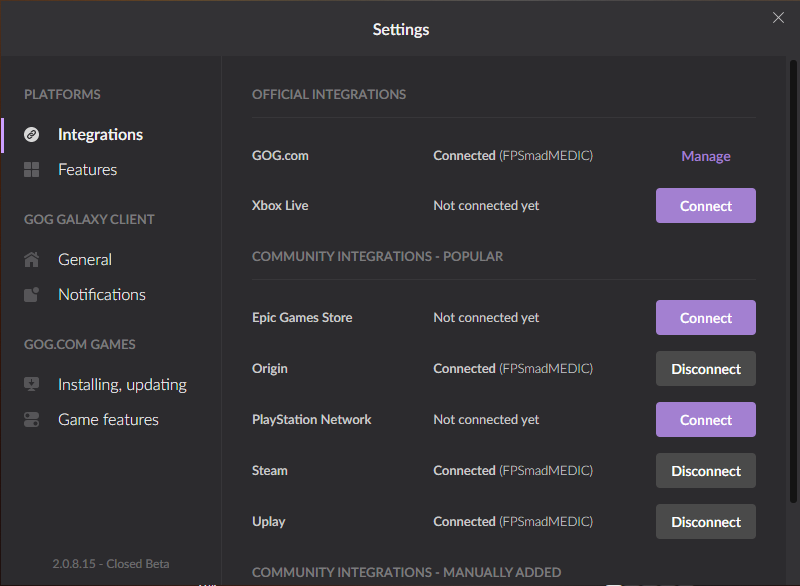 A few features added so far are Epic, Origin, Steam, and Uplay “Quit when closing” and “Launch with GOG Galaxy”. You can choose to have any one of or a number of your launchers open with GOG Galaxy so that anything you may want is ready to launch right from GOG Galaxy. 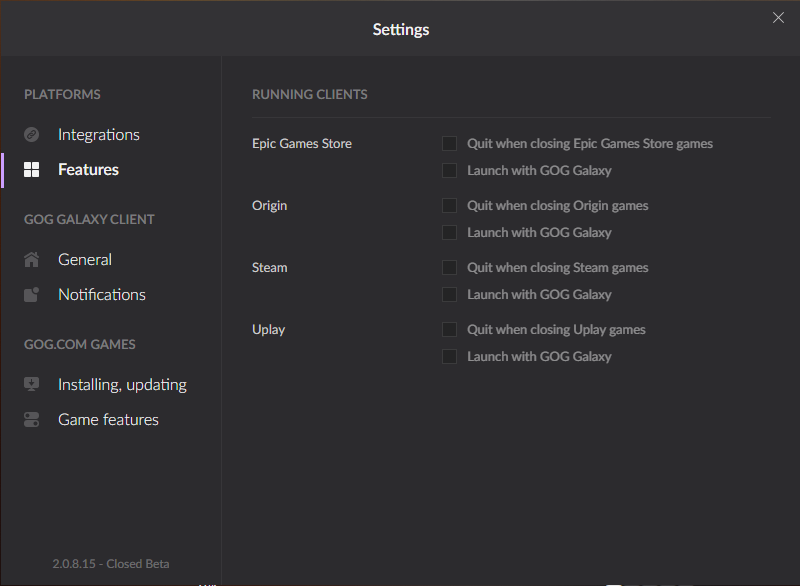 A few more nice features found in the Settings are Auto-update’s for games, Cloud Saves and Overlay. This is a very eye-opening look at what an experienced and not greedy game company can do with a launcher and this just puts Epic to shame when you compare the level of development and depth of wallets. . . Epic has troves of Fortnight money and no development scope it would seem outside making what has turned out to be a game-changing game. Whereas not leading with greed, and looking to innovate and develop to their furthest extent with a notably shorter supply of cash to work with is not only mind-blowing but humbling, yet again reminding us all why GOG is just plain GOOD OLD GAMES. A company that cares about the development of its software to the peak of their abilities taking in their customer’s concerns and cares to turn them into ideas that gamers worldwide can do nothing but love. This is, of course, my personal opinion but come on you have to agree GOG has earned their title over and over in the PC gaming community, where a growing laundry list of publishers work their “live service” “microtransaction” riddled games into a private ecosystem they control where they can maximize on their profits and get away with as much as possible. I truly applaud GOG for their development and scope here and hope they achieve everything they are setting out for with GOG Galaxy 2.0 because this is refreshing, to say the least for a launcher and just idea in general for PC gaming. 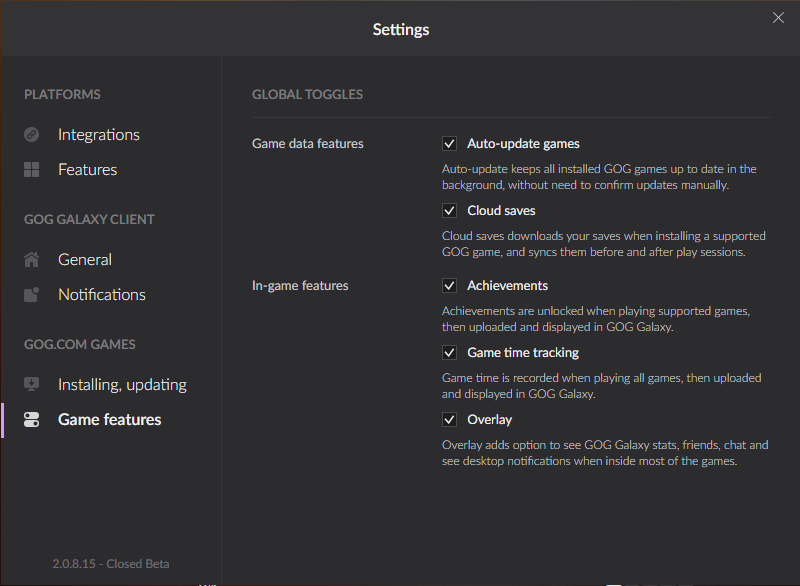 Few new things that came with the Atlas Update on Sep. I am looking at a way I can report on the development of GOG GALAXY 2.0, so once I get a feel for their update/development cycle I will plan more articles and report on any developments like launching games from GOG directly with no need for the original launcher, now wouldn’t that be fancy! For now, though here are the Atlas Update notes.

Find games, friends, or metadata with the new search button (or Ctrl+F / CMD+F). Quick actions like launching games or starting a chat are also available from Global Search.

Games found with Global Search can be marked as owned, and then linked to an executable for launching and game time tracking.

Manage your active, queued, and completed downloads from a new section that appears in the sidebar automatically (for GOG.com games only).

New columns are available in the library list view. Reorder and toggle columns in the list view, customize additional info shown in the grid view or sort and group with new options.