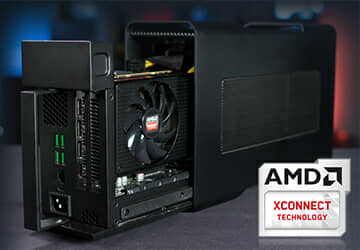 AMD > Who We Are > Newsroom > Press Releases

Traditionally, PC gamers have been faced with the problem of choosing between gaming notebooks, sacrificing portability for gaming performance, or ultrathin notebooks, sacrificing gaming performance for portability. A lightweight notebook or 2-in-1 with Thunderbolt 3 that is compatible with AMD XConnect™ technology brings the best of both worlds to life – conveniently lightweight on its own, but as needed, can easily tap into serious framerates and image quality of a gaming notebook with a powerful external GPU. The connection between the external GPU enclosure configured with Radeon™ R9 300 Series graphics is made possible over Intel’s Thunderbolt™ 3, and can be connected or disconnected at any time, a first for external GPUs.

“AMD XConnect™ technology is representative of the Radeon Technologies Group’s on-going commitment to gamers. With the introduction of our user-friendly plug-and-play external GPU solution, gamers no longer need to sacrifice portability for powerful performance in notebook gaming,” said Raja Koduri, Senior Vice President and Chief Architect, Radeon Technologies Group, AMD. “As innovators paving the way with an ingenious external GPU solution for notebooks, we look forward to creating a thriving ecosystem of notebooks enabled with AMD XConnect™ technology in collaboration with leading manufacturers.”

AMD is also pleased to reveal that there is a notebook available today that can unlock the potential of AMD XConnect™ technology, brought to you in a collaboration with Intel’s Thunderbolt™ group and Razer: The Razer Blade Stealth, a brand new ultrathin notebook compatible with AMD XConnect™ technology, and the Razer Core, an external GPU enclosure that connects to the Razer Blade Stealth notebook via Thunderbolt™ 3. When the Razer Core is equipped with a Radeon™ R9 300 Series GPU, gamers can experience desktop-like gaming performance in a convenient plug-and-play solution on a Stealth running an AMD XConnect compatible driver. Configuring the Razer Core with a Radeon™ R9 300 Series GPUs even allows gamers to play on the Blade Stealth’s high-resolution IGZO screen, or connect to an external AMD FreeSync™-enabled monitor for a breathtakingly smooth gaming experience.

“The Razer Blade Stealth was developed as the ultimate Ultrabook™ for work on-the-go, additionally capable of transforming into a desktop gaming environment when connected to Razer Core, thanks in part to remarkable contributions from AMD and Intel,” says Min-Liang Tan, Razer CEO and cofounder. “The collaboration and development between Razer and AMD for users with Radeon R9 300 Series graphics in the Razer Core helped us realize the world’s first Thunderbolt 3 plug-and-play external graphics solution. A single Thunderbolt 3 connection now provides power and data between the Blade Stealth and Core, and other peripherals can connect to the Razer Core’s USB ports to provide a desktop-class gaming experience.”

“Thunderbolt™ 3 brings Thunderbolt to USB-C at speeds up to 40Gb/s, creating one compact port that does it all,” said Jason Ziller, Director of Thunderbolt Marketing, Intel. “Thanks to technical collaboration with the Radeon Technologies group at AMD, desktop Radeon™ graphics cards are now validated for use with Thunderbolt™ 3. AMD’s new XConnect™ technology brings effortless plug-and-play support and a convenient management interface to notebooks and 2-in-1s with the Thunderbolt™ 3 external graphics solution configured with a powerful Radeon™ R9 300 Series GPU.”

For more than 45 years, AMD has driven innovation in high-performance computing, graphics, and visualization technologies ― the building blocks for gaming, immersive platforms, and the datacenter. Hundreds of millions of consumers, leading Fortune 500 businesses, and cutting-edge scientific research facilities around the world rely on AMD technology daily to improve how they live, work, and play. AMD employees around the world are focused on building great products that push the boundaries of what is possible. For more information about how AMD is enabling today and inspiring tomorrow, visit the AMD (NASDAQ: AMD) website, blog, Facebook and Twitter pages. 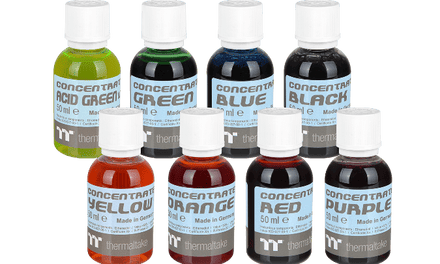 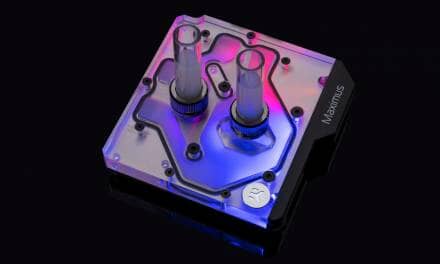