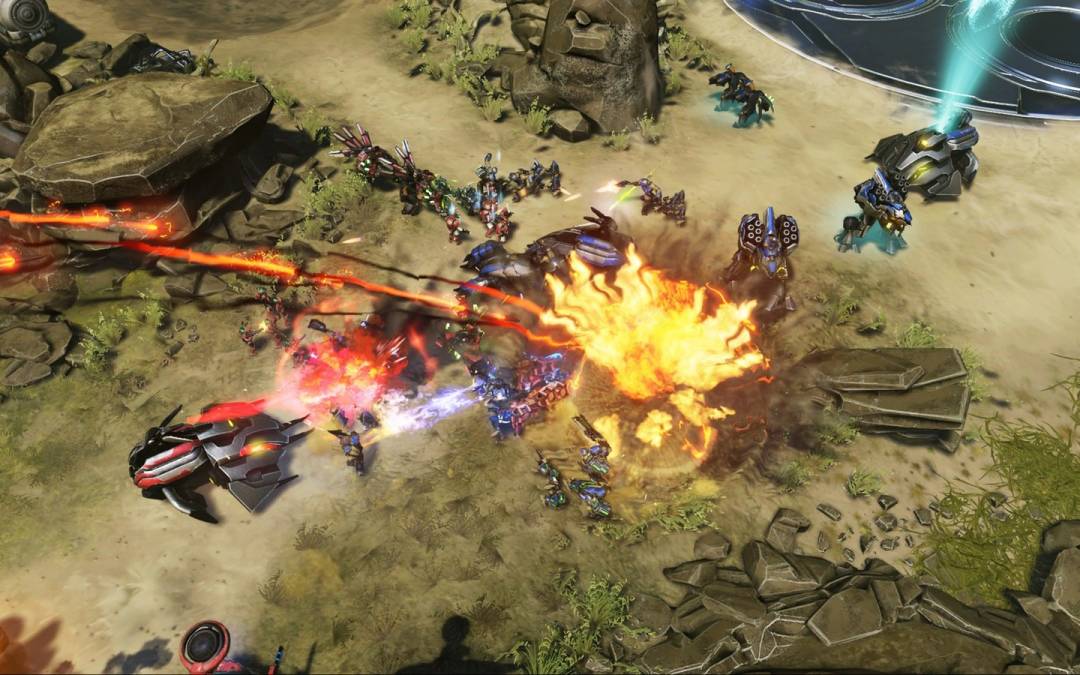 The release date of Halo Wars 2 is very close now, just a few days away. It might be a good time to take a look at it, since it’s a kind of a weirdo. The first game tried very hard (and had a good measure of success) to be a competent RTS developed for consoles. Ensemble Studios, the first game’s developer sadly disbanded soon after the launch and any possible future for the series was dubious at best.
That is: until the general public saw an announcement in 2015 that Halo Wars 2 is being made by the capable hands of the Creative Assembly. The Total War masterminds by that time had been working on the game for months, and the results are really interesting.
Let’s take a look.

Let’s get this discussed right off the bat. Blitz is one of the most creatively assembled game modes in recent memory. Short version: Blitz merges real-time strategy and a card game. It takes the map and tactical gameplay from the RTS genre, but building your army and deploying it on the field falls squarely in the CCG category. But first things first.

Do you want to build a deck, man?

You have a deck full of cards, yeah? It includes units you can deploy, as well as abilities (auras, boosts, orbital bombardments…), each with a certain energy cost you have to pay before using it on the battlefield. During the battle itself you have four cards on hand at any given time, drawn randomly. You can shuffle a card or two back to the deck and draw new ones, but that costs you precious energy you probably want to spend on instagibbing your enemies with an orbital strike.

Using cards is as easy as dragging them onto the map where you want their effect to take… well, effect. Units pop into existence, abilities erupt in a flare of sudden glory. It’s all very fun and doesn’t make much sense. Thankfully, it doesn’t have to, it’s multiplayer, not a story mode, so anything goes as long as game mechanics are entertaining.

Getting the right cards

There will be two ways to get more cards for your decks. One will be straightforward: complete daily or weekly challenges, play through the campaign and the card packs will start raining. Alternatively, there will be microtransactions, for those without the time or patience to get the card by playing.
It remains to be seen, what effect it will have on game balance after the launch.

‘I am the Brute Squad’

Halo Wars 2 brings a sort-of-new enemy to the forefront. Atriox is an ex-Covenant Brute who rudely refused to die when his superiors decided he had outlived his usefulness. What followed were years of conflict, because other once-Covenant folk rallied to his banner en masse. Thanks to Atriox’s resilience, battle prowess, and tactical genius the emergent army, calling themselves â€˜the Banished’, gave the Covenant a lot of trouble during the Human-Covenant war.

What does it mean for the players? Halo veterans get to fight against the Covenant once more, though in new vestments. Newcomers on the other hand can enter the Halo universe without feeling immediately lost. It’s a perfect balance, though a lot depends on how Creative Assembly and 343 Industries handle the plot.

The Spirit of Fire crew is back from cryosleep. Last seen good twenty years before the event shown in Halo: Combat Evolved, they return several months after the end of Halo 5: Guardians. The world has changed a ton in their absence, and they have a lot of catching up to do, but it must wait. Atriox’s forces have their sights set on Forerunner Installation 00, which does not bode well for pretty much anyone in the galaxy.
Can an understrength army defeat a foe who stood tall against the might of the Covenant? Neither us nor they know, but it doesn’t mean they aren’t going to try.

One of the main reasons real-time strategies don’t do very well on consoles is that they usually require complex controls, including the speed and precision of computer mouse. Ensemble Studios did a good job, and Creative Assembly gladly built on these foundations, with only slight tweaks to the general scheme.
Their biggest contribution are control groups tied to the D-pad. The original Halo Wars suffered from a distinct lack of them, so their arrival in the sequel is a definite improvement. It may allow less agile players to employ strategies more complex than rolling around the map in one big murderhorde.

Console and PC in accord

The bad news is, it doesn’t mean cross-platform multiplayer, because PC players would have the high ground when it comes to controls. But the good news is you will be able to share your saves and profile between your Xbox and Windows 10 PC. It also means that you’ll only have to buy the game once to enjoy it on either platform. You rarely go wrong by deciding to save your players’ money.

Halo Wars 2 is definitely going to be an interesting game. If the campaign is strong in terms of plot and missions, and the players accept Blitz as their new lord and savior, HW 2 may turn out to be a game to last years. Creative Assembly clearly avoids making a Total War clone, instead improving (where needed) on what the playerbase is already familiar with.
Halo Wars 2 launches on February 21st, giving you still a little bit of time to research further and pre-order it, if you decide it is indeed worth checking out.
Which side are you on? UNSC or the Banished?