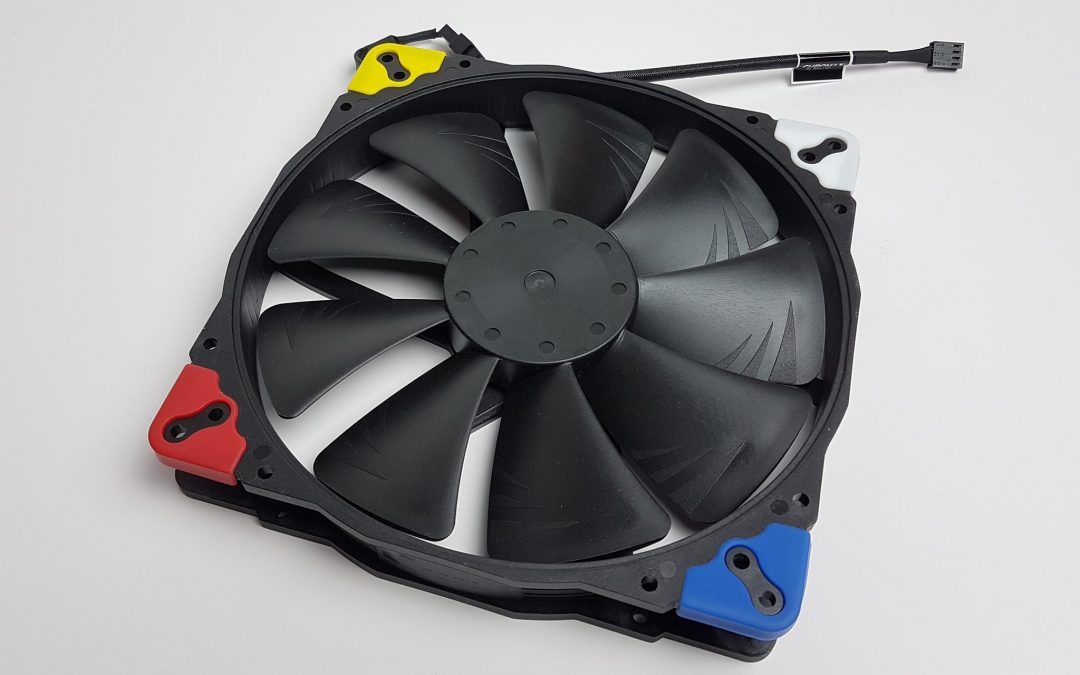 Noctua originates from a collaboration between the Austrian Rascom Computer distribution Ges.m.b.H. and the Taiwanese cooling specialist Kolink International Corporation, pooling more than thirty years of experience in the development, manufacturing, and marketing of high-end cooling components. Established in 2005, Noctua took international silent enthusiasts’ hearts by storm and quickly developed into one of the most acclaimed suppliers of premium quality quiet cooling products. Today, Noctua is present in more than 30 countries across the globe and working with several hundred sales partners. Chosen by noise-conscious PC users, system integrators and industry clients alike, Noctua has become synonymous with impeccable quality, excellent customer service, and class-leading quiet cooling performance.

Noctua has expanded the chromax line of their accessories and the fans in addition to the coolers. This time around they have released the chromax.black version of their NF-A20, NF-A12x15, NF-A9x14, NF-A9x25, NF-A8 fans along with the supported chromax.SAVP5/6 anti-vibration pads. These fans retain the design and all the features of the regular versions yet coming in the black color instead of the beige and brown color scheme that would allow the user to better color coordinate their builds. The outlook is more towards the stealth look. The NF-A20 PWM chromax.black.swap is a 200mm fan based on the regular NF-A20 PWM fan. The fan comes with the NA-SAVP6 chromax anti-vibration pads in 6 colors which are red, green, blue, white, black, and yellow.

*Prices are the MSRP 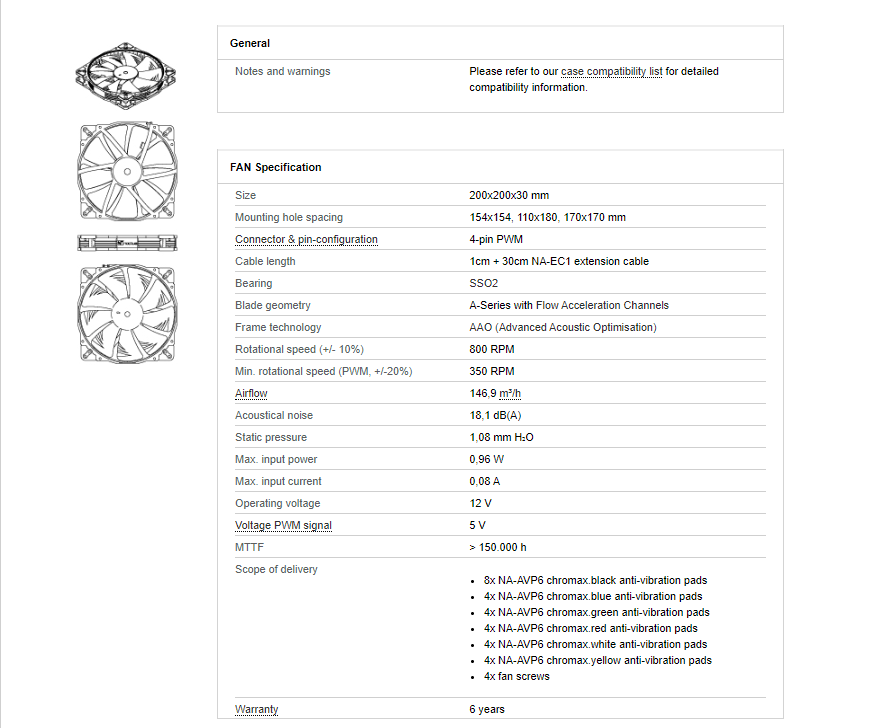 The fan is shipped inside the cardboard box in chromax theme. 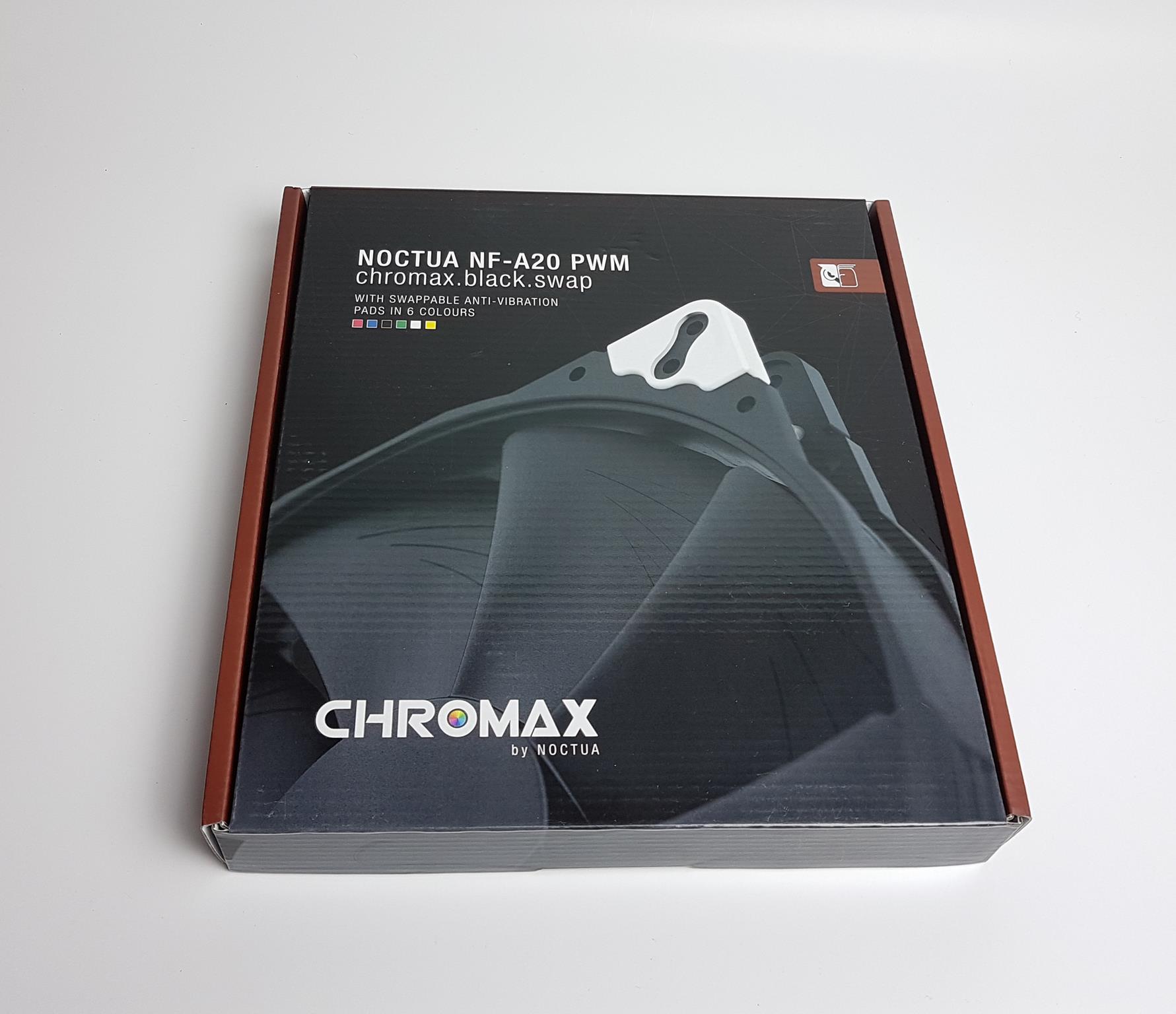 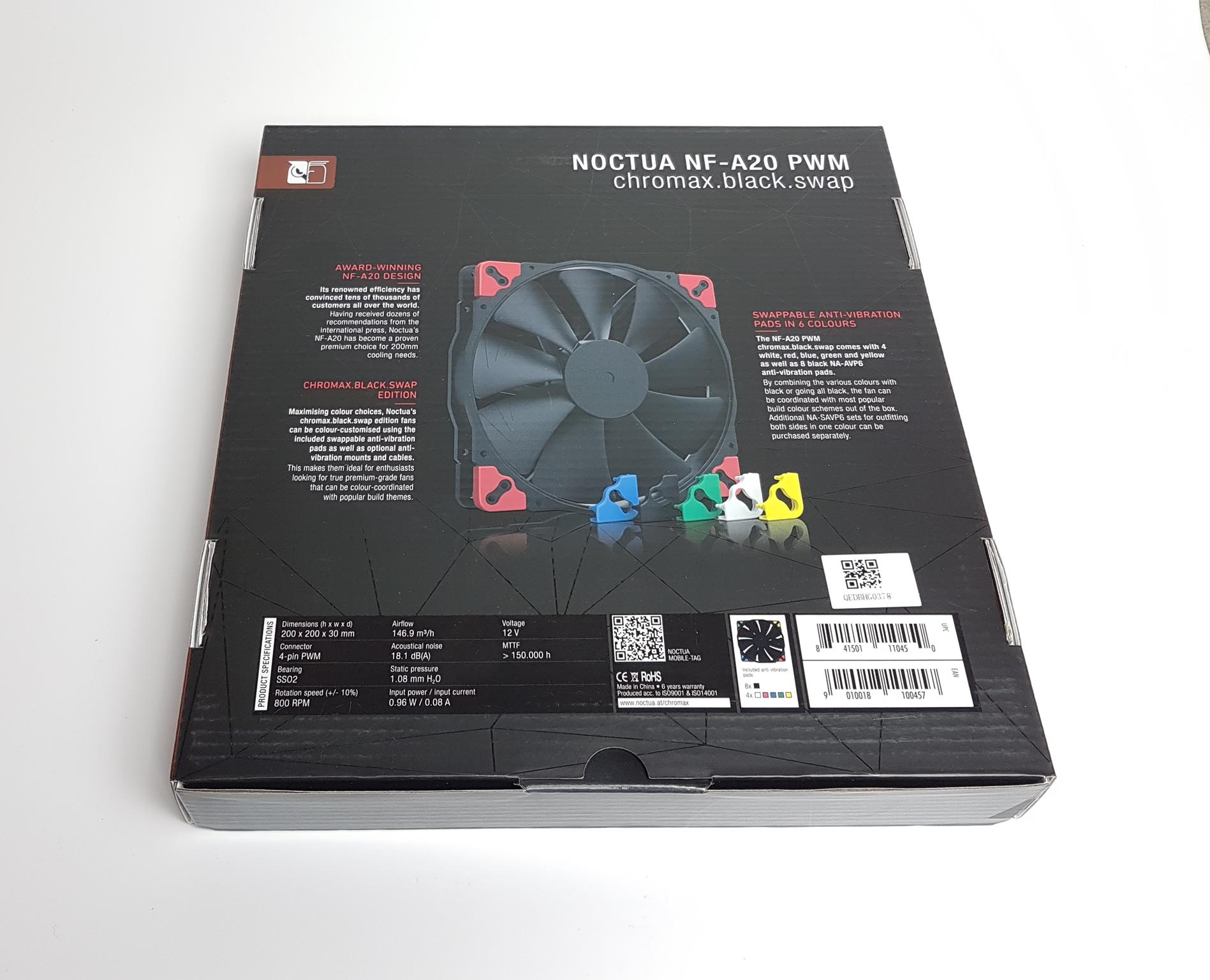 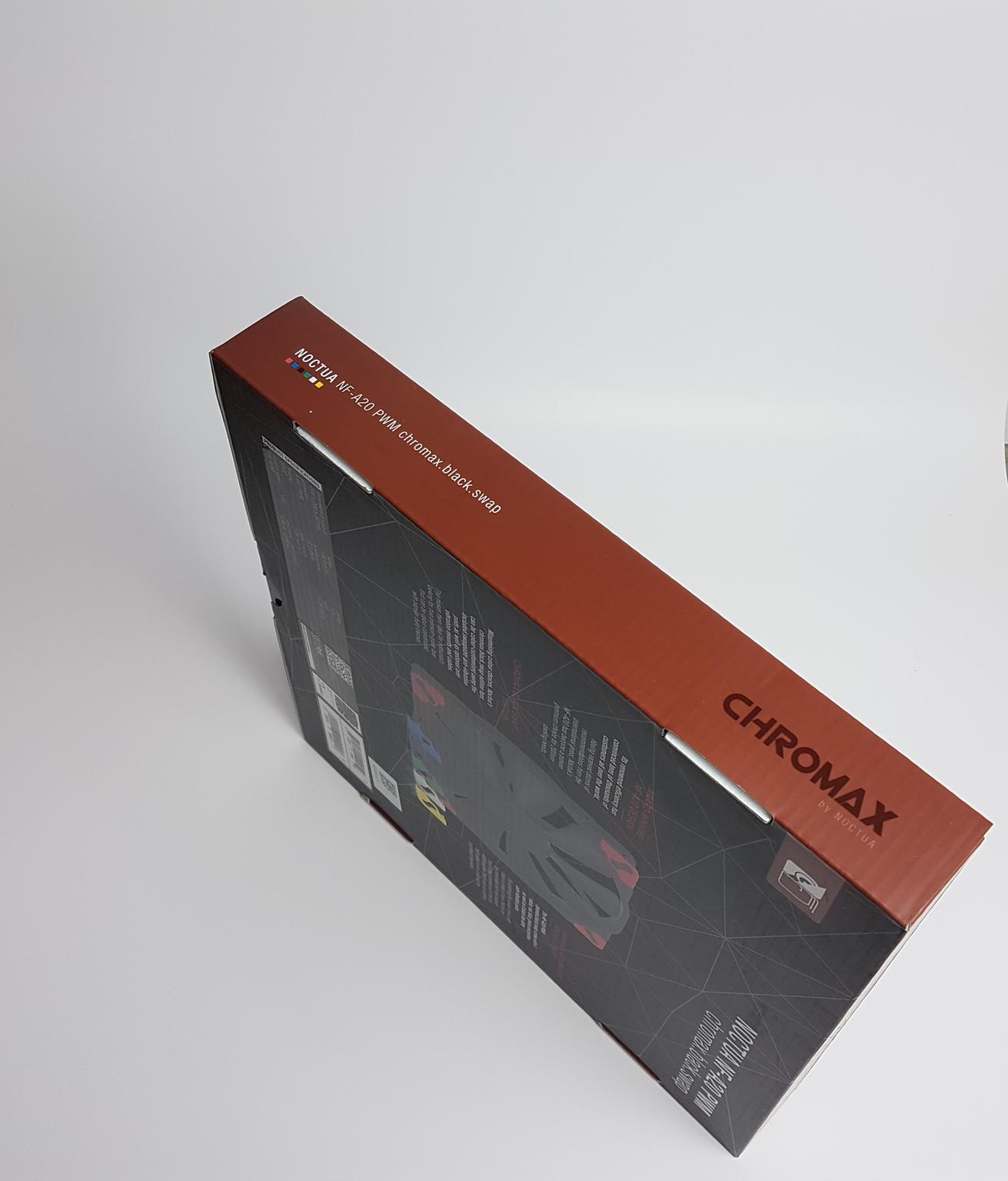 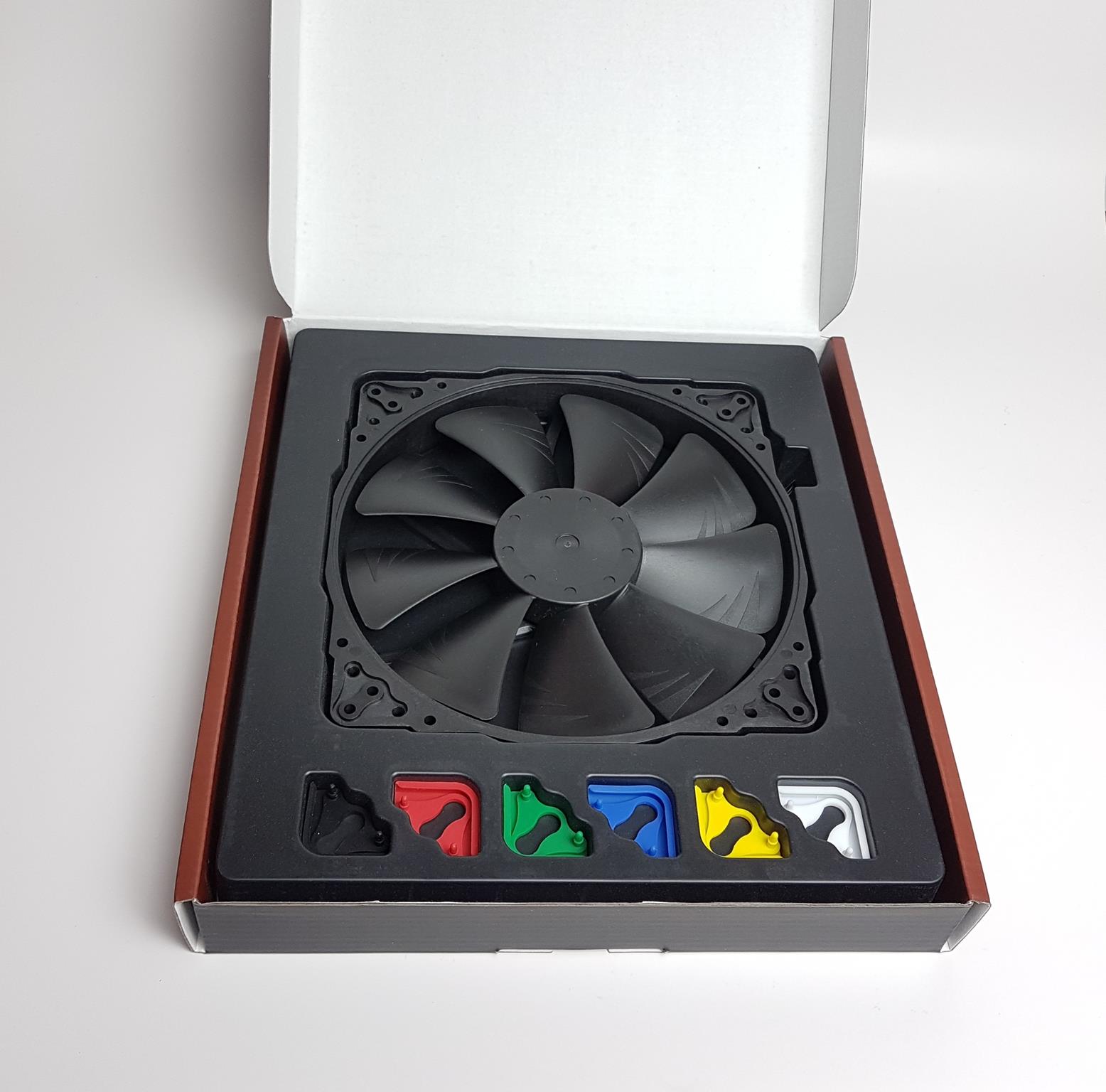 Opening the box will show the fan placed inside a black color plastic made container. The anti-vibration pads are placed right next to the fan in each color. 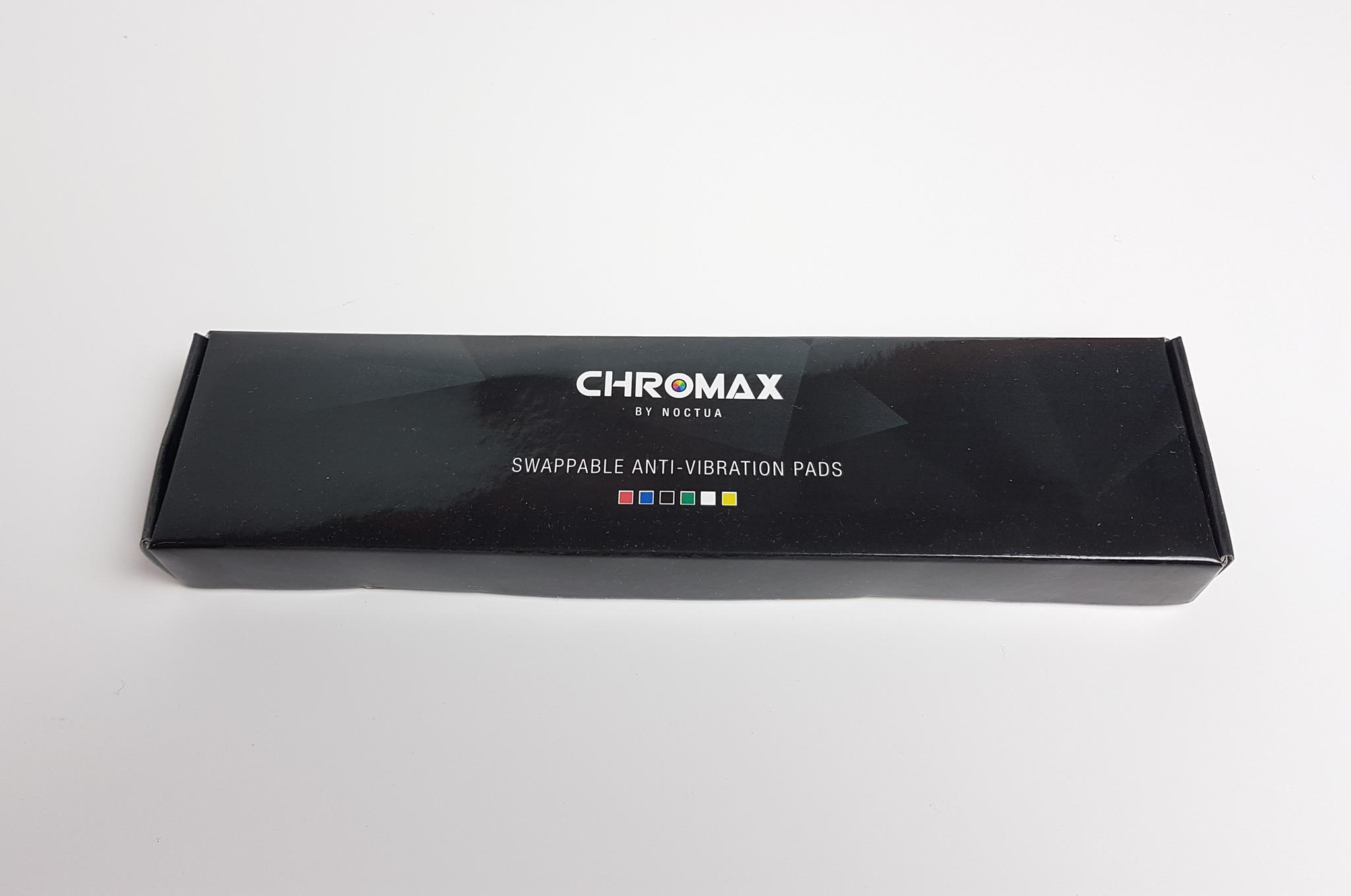 A paperboard box is included as well. 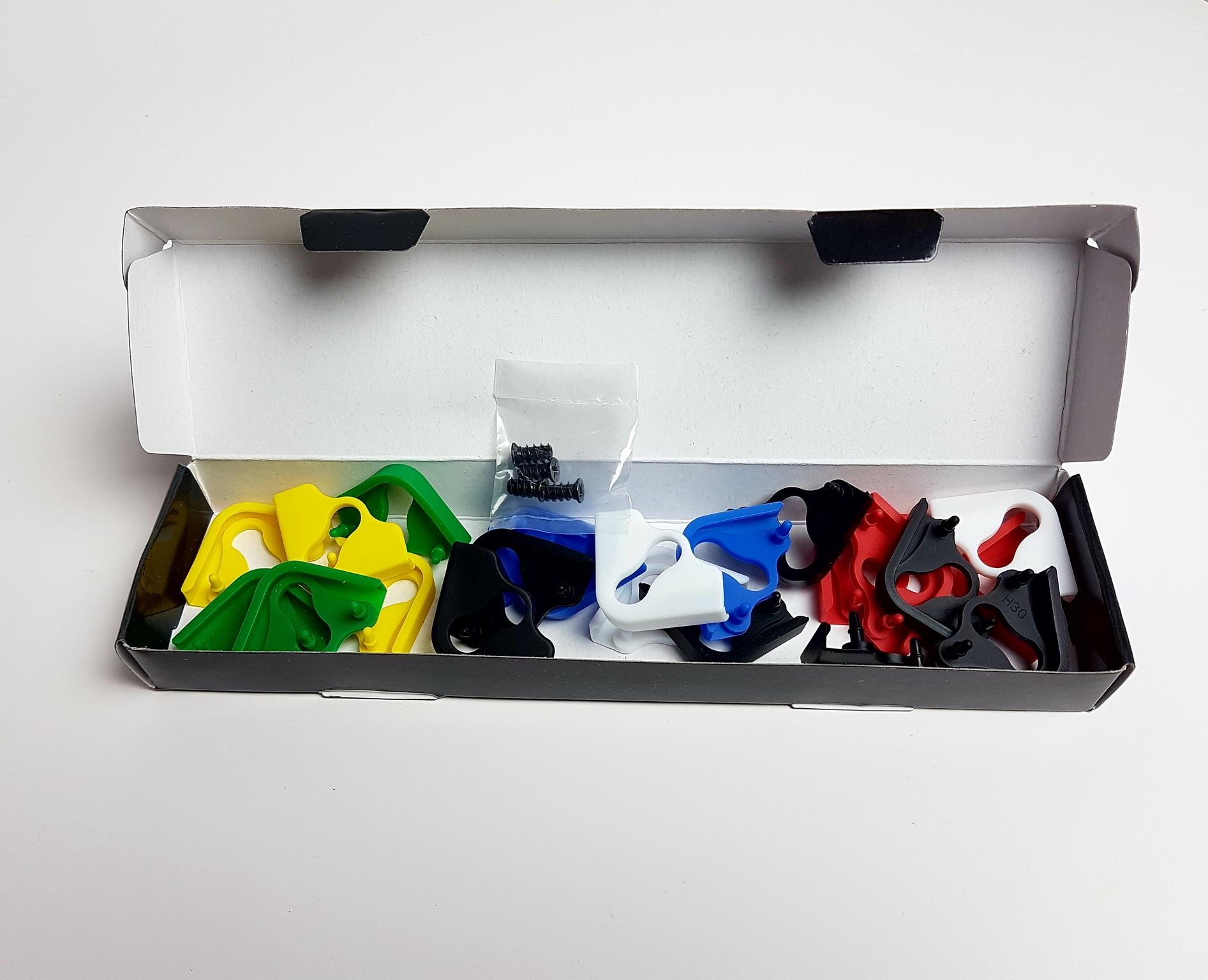 That box has the rest of the anti-vibration pads and 4x black color tap screws.

*Prices are the MSRP

The pads are shipped inside chromax themed cardboard box. 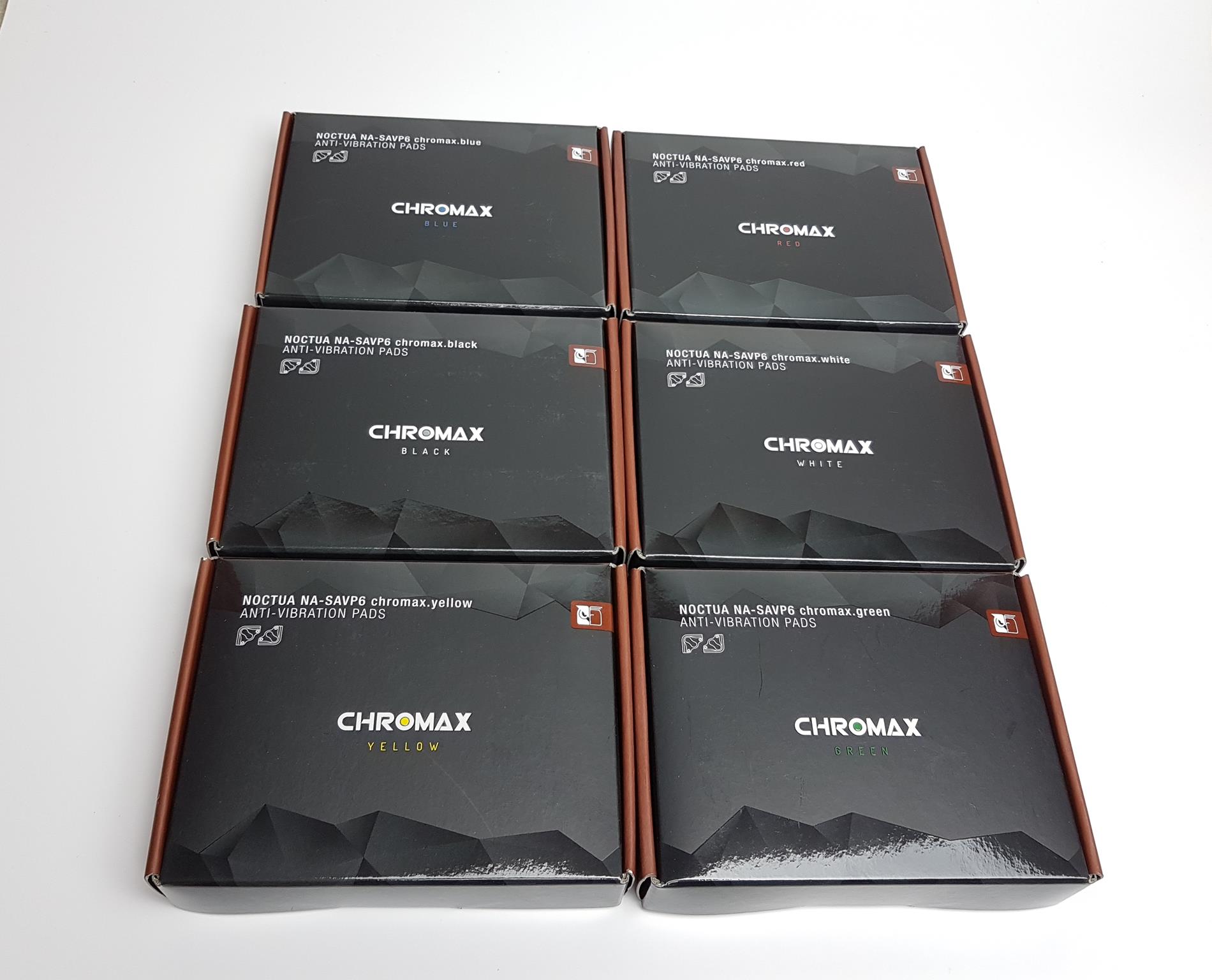 The model of the product is printed on the top left. There is a Noctua brand logo on the top right. CHROMAX.color name is printed in the middle indicating the color of the pads. 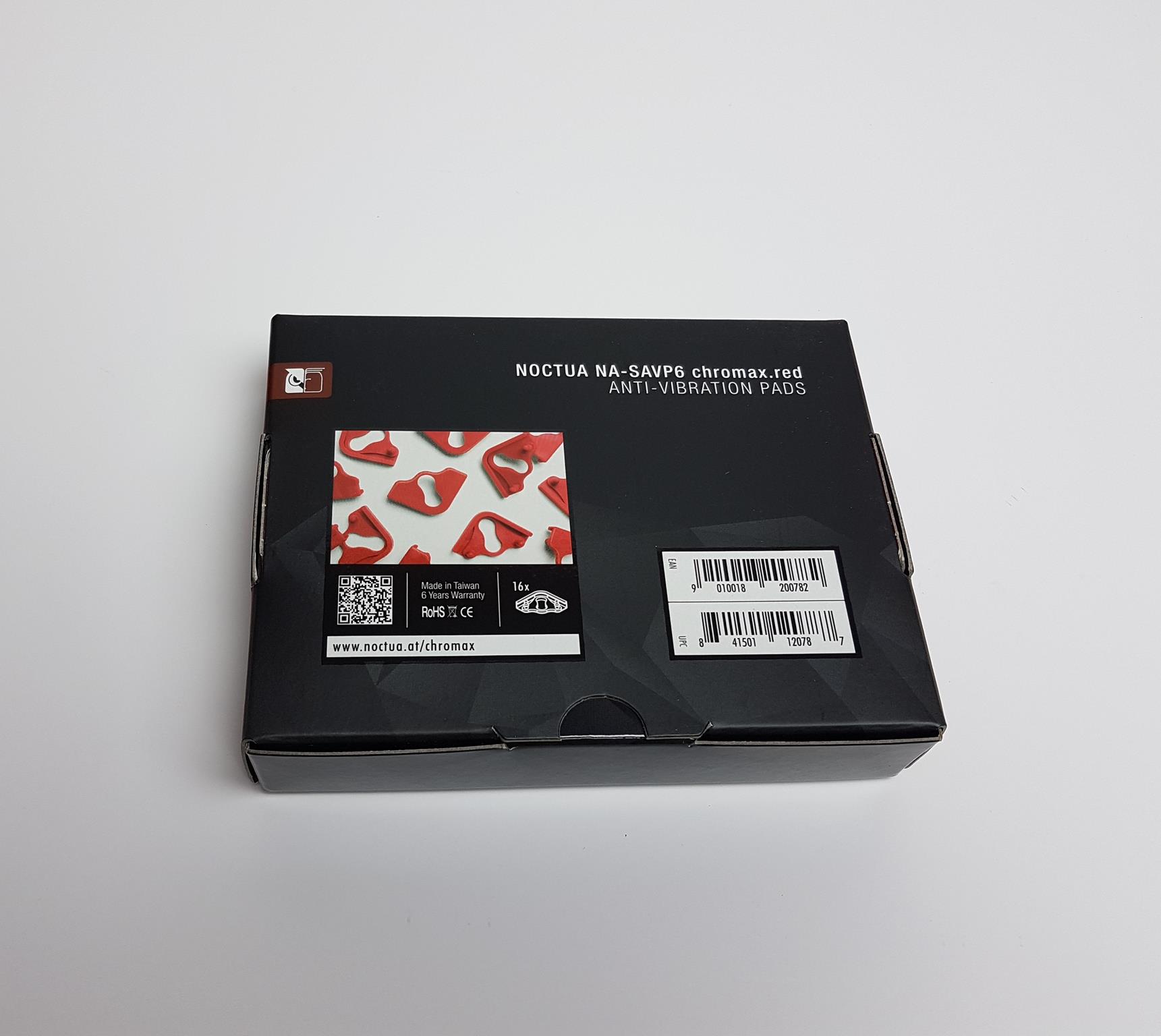 There is a Noctua brand logo up top. 16x pads are included in the box which will cover two fans. The pads are made in Taiwan. The EAN and UPC info labels are printed on the bottom. 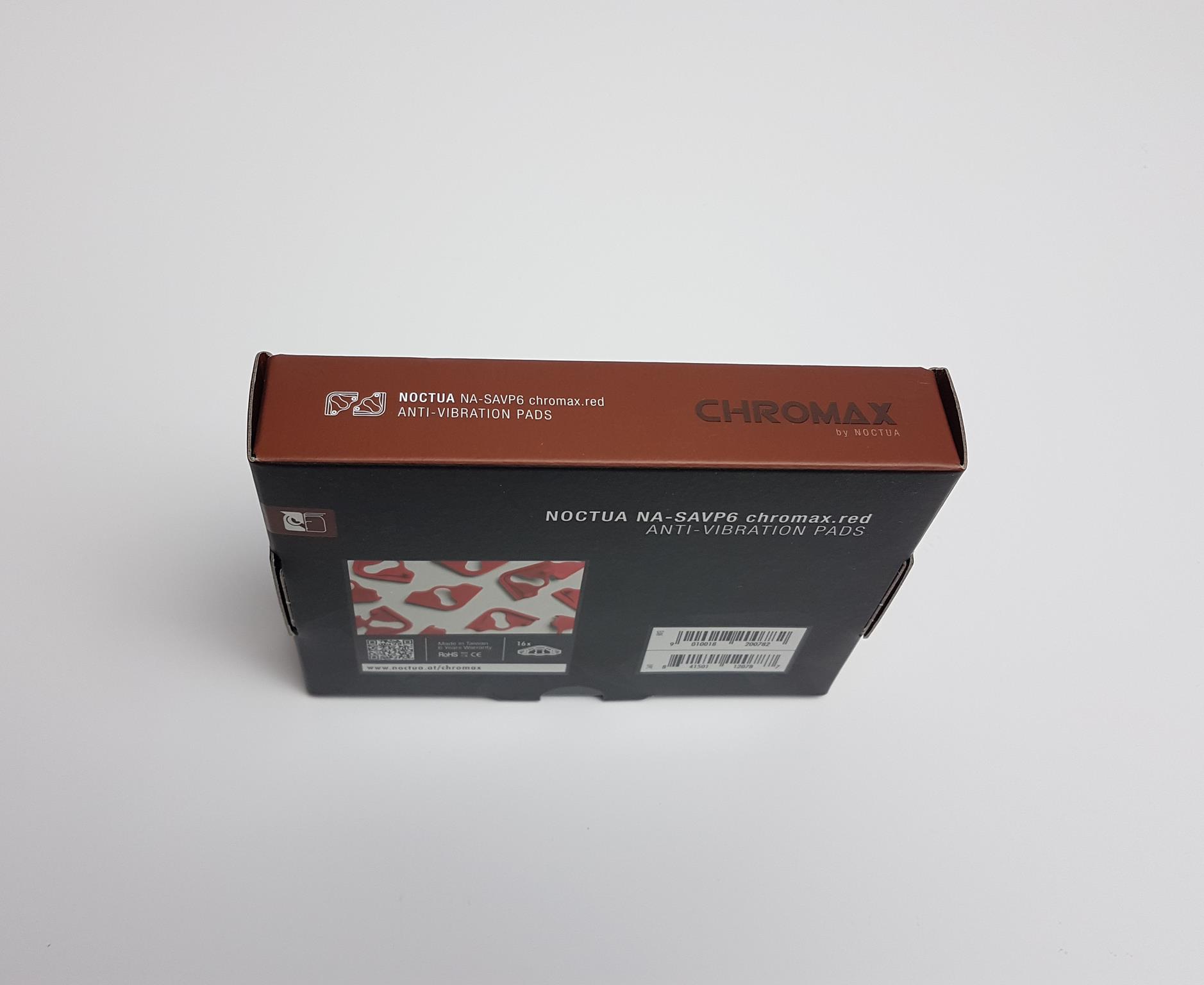 There is a diagram of the pads on the left followed by the model information. CHROMAX is printed on the right side. 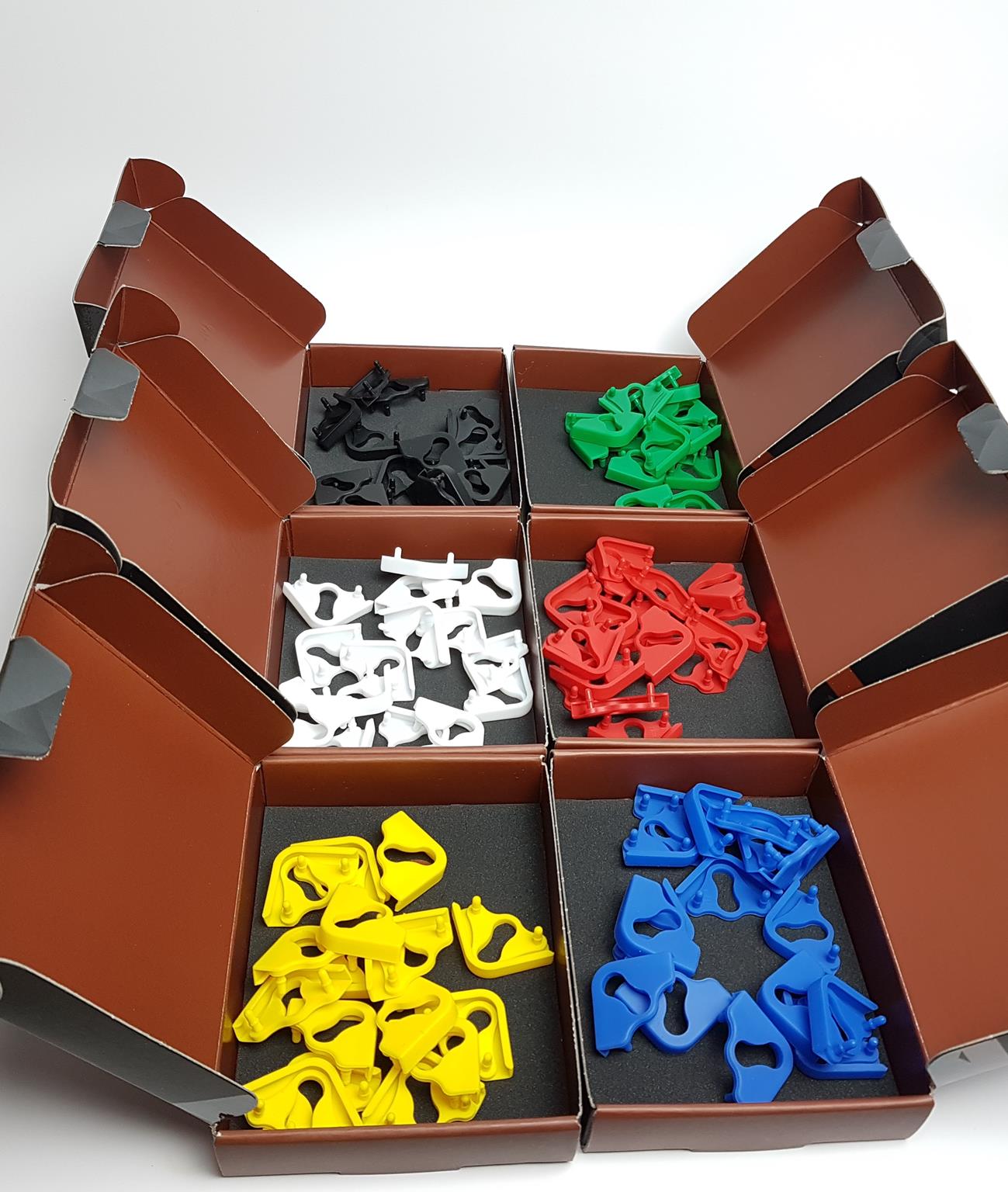 It is time to take a closer look at the fan and the pads. Here is what Noctua is saying about their new NF-A20 PWM chromax.black.swap fans, “Having received dozens of awards and recommendations from international hardware websites and magazines, the NF-A20 has established itself as a default choice when it comes to premium-quality 200mm fans. The chromax.black.swap edition combines the NF-A20’s signature quiet cooling performance with an attractive all-black design and a bundle of swappable red, white, blue, green, yellow and black anti-vibration pads that allow the color-customization of the fan to match individual build color schemes. For further customization, a wide range of accessories such as colored cables and anti-vibration mounts are available separately. Topped off with Noctua’s trusted premium-grade SSO2 bearing, more than 150,000 hours MTTF and 6-year manufacturer’s warranty, the NF-A20 PWM chromax.black.swap is the perfect choice for all users who value individual, focused build aesthetics just as much as class-leading quality and performance.” 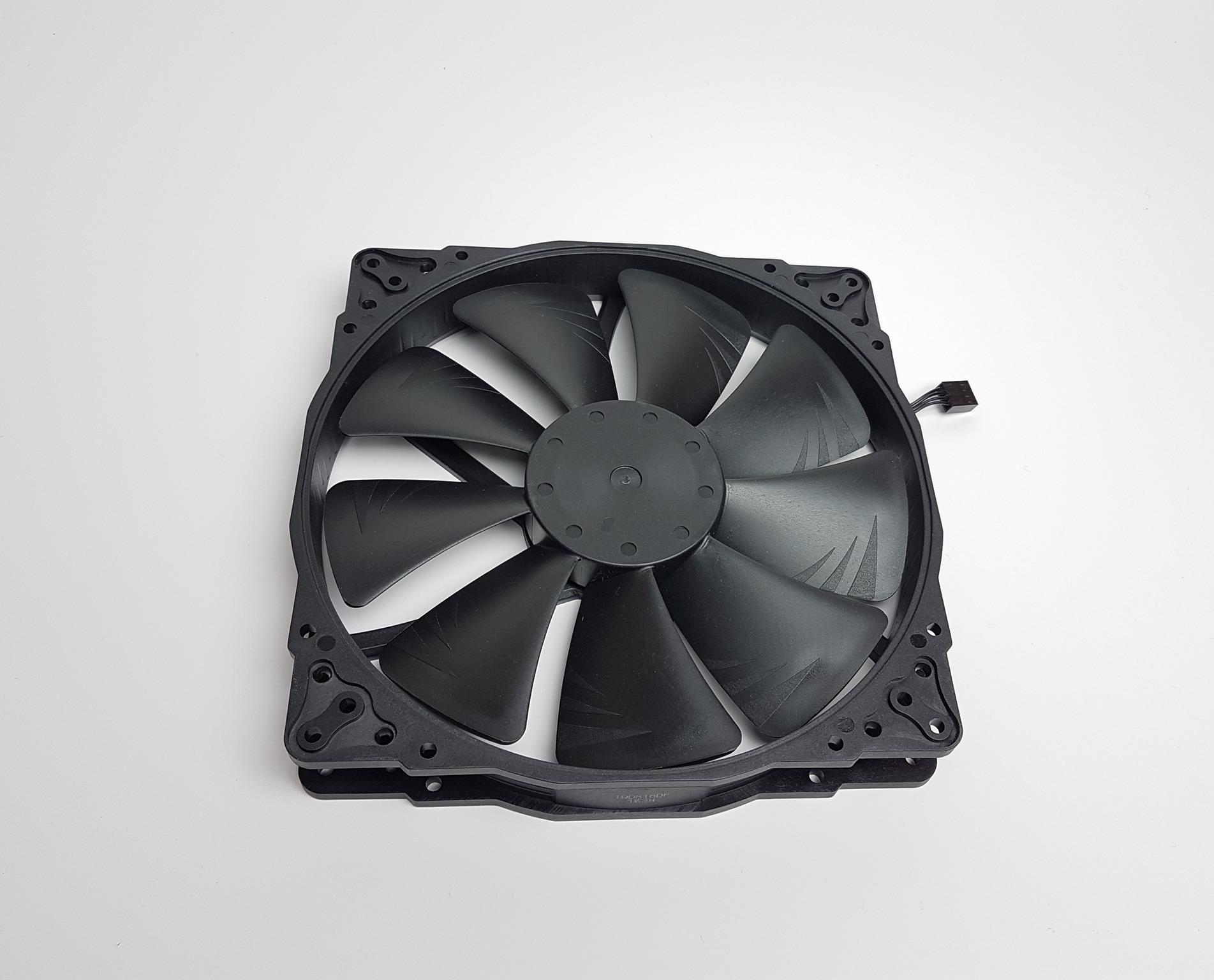 The fan is in total black color including the blades and frame. The dimension of the fan is 200x200x30mm. The thickness of the fan is 30mm which is more than the more common 20mm thickness in this sizing. Noctua is not leaving any corner uncovered. There are 9 blades on the fan. The center of the fan has a diameter of 62mm. There is no branding sticker pasted here as it is a solid cover.

The frame from the top is following the Noctua’s stepped inlet design which when combined with other frame’s features adds turbulence to the influx in order to facilitate the transition from laminar flow to turbulent flow, which reduces tonal intake noise, improves flow attachment and increases suction capacity, especially in space-restricted environments. There are inner surface microstructures on the inner side of the frame which suppresses the flow separation from the suction side of the blades. This results in reduced blade passing noise while maintaining airflow and pressure. 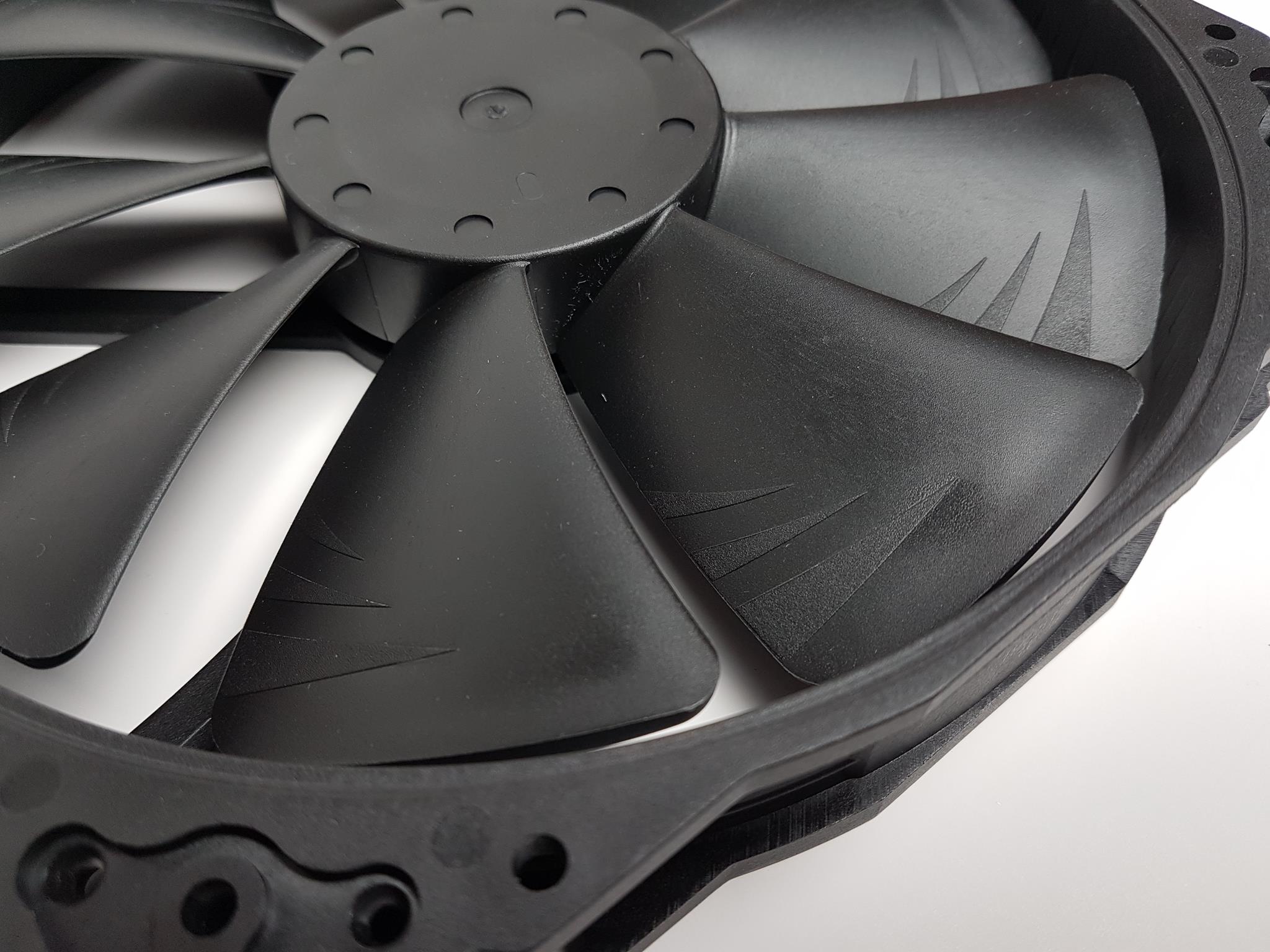 The NF-A20 PWM chromax.black.swap impellers feature suction side Flow Acceleration Channels. By speeding up the airflow at the crucial outer blade regions, this measure reduces suction side flow separation and thus leads to better efficiency and lower vortex noise. 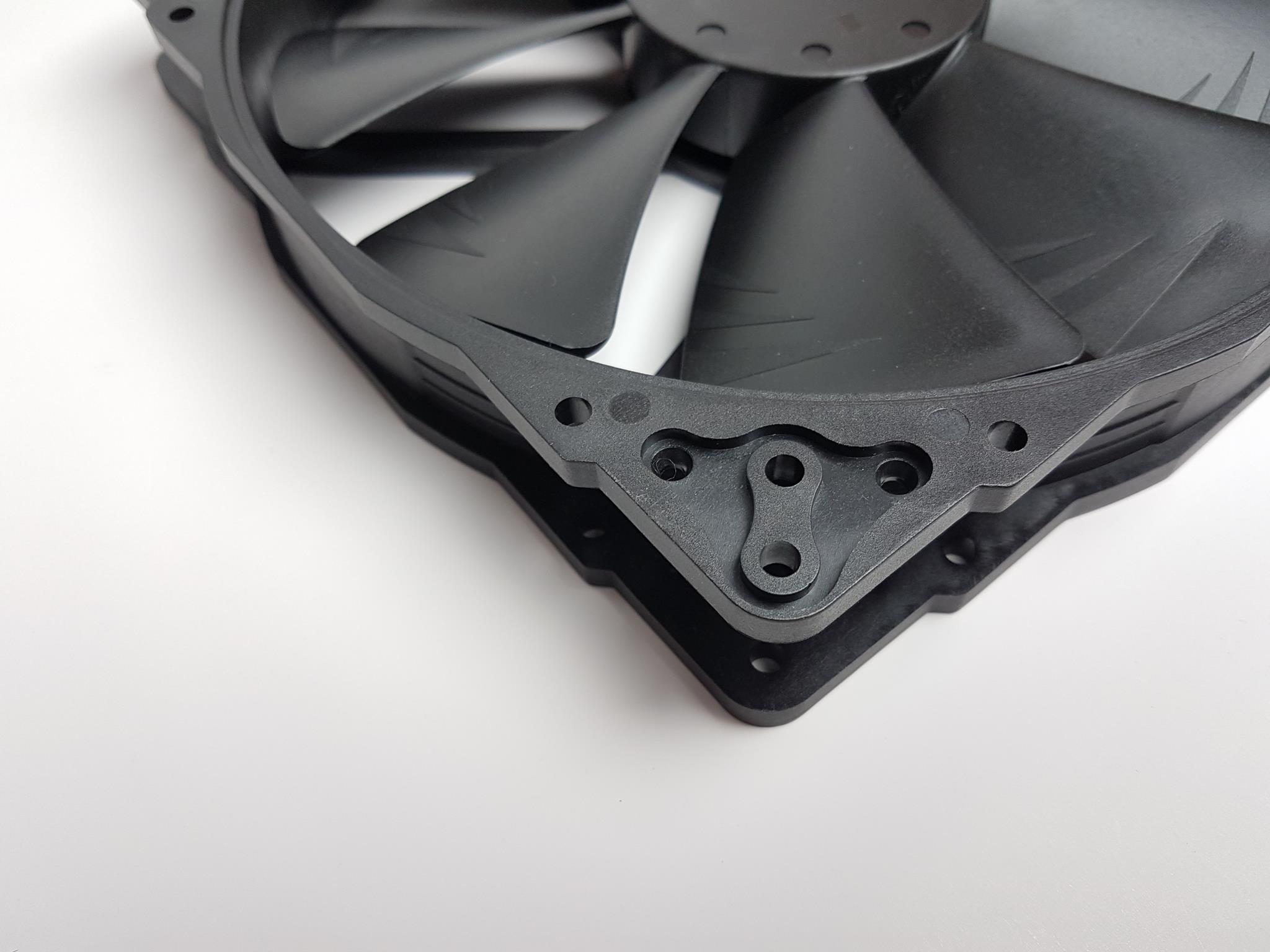 There are 3 sets of mounting provisions on the Noctua NF-A20 PWM chromax.black.swap. These are:

While the 154x154mm and 110x180mm spacing allow replacing most 200mm fans, the 170x170mm spacing is used by many 230 and 250mm fans. A few words of caution here, before buying these fans, make sure your chassis has these mounting provisions otherwise fans would not fit on the chassis. 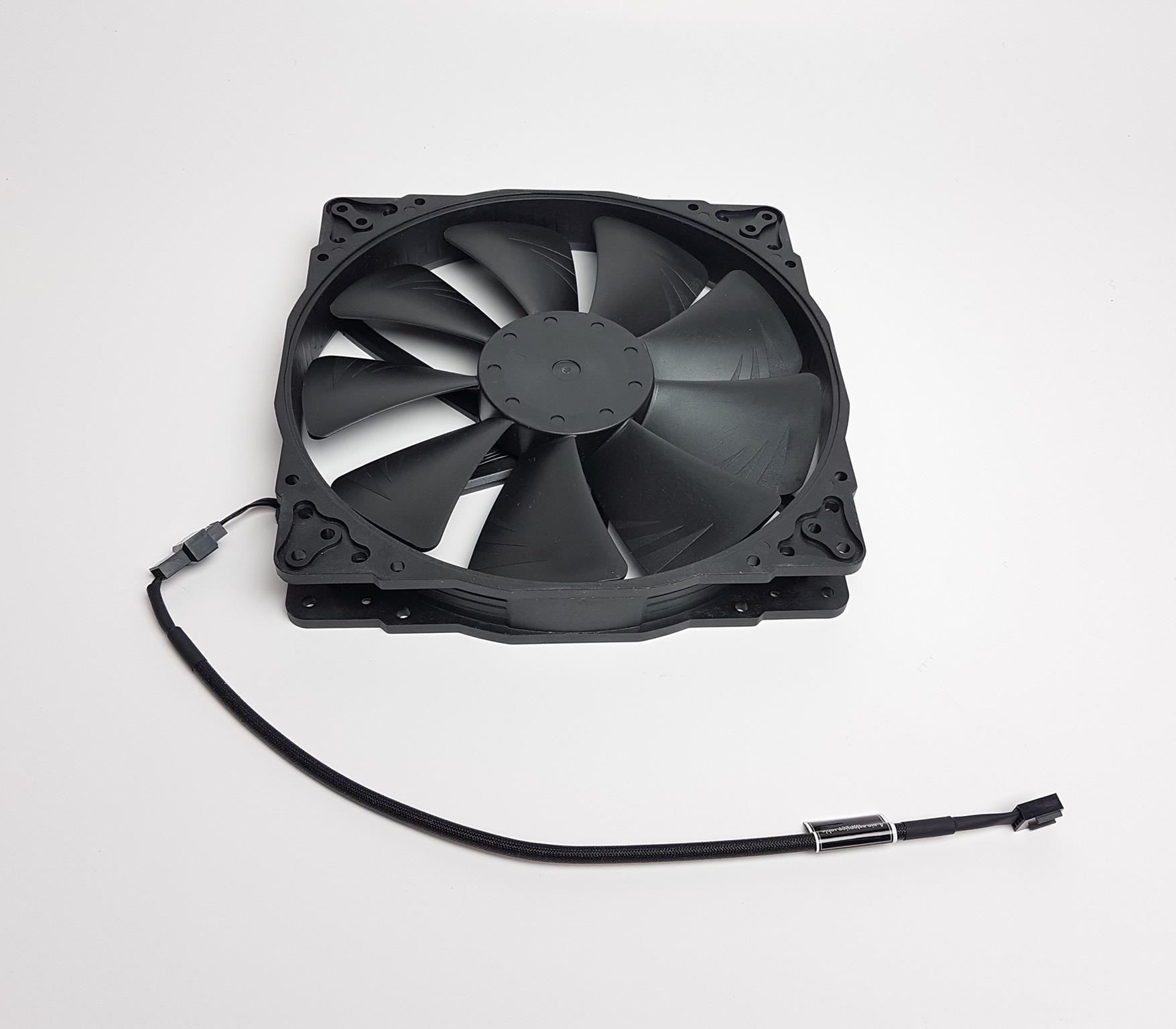 The chromax series of fans are featuring the modular cable approach and the NF-A20 PWM chromax.black.swap is no exception there. Noctua has included NA-EC1 chromax.black power cable extension in the box. It has a length of 300mm. This design allows the user to provide the NA-EC1 cables in 6 colors which allow the user to further color coordinate and customize their builds. 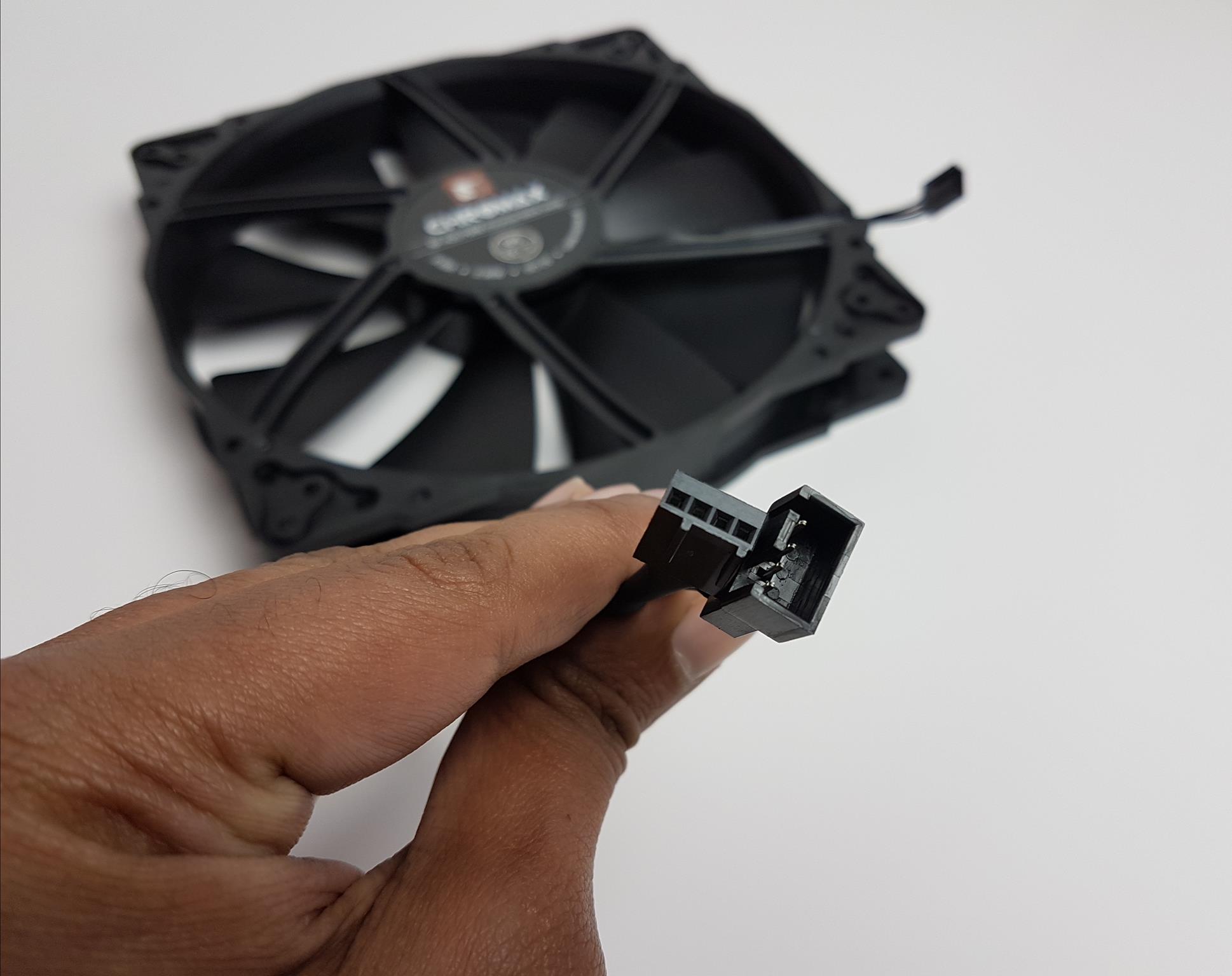 The NA-EC1 has a 4-pin PWM connector. 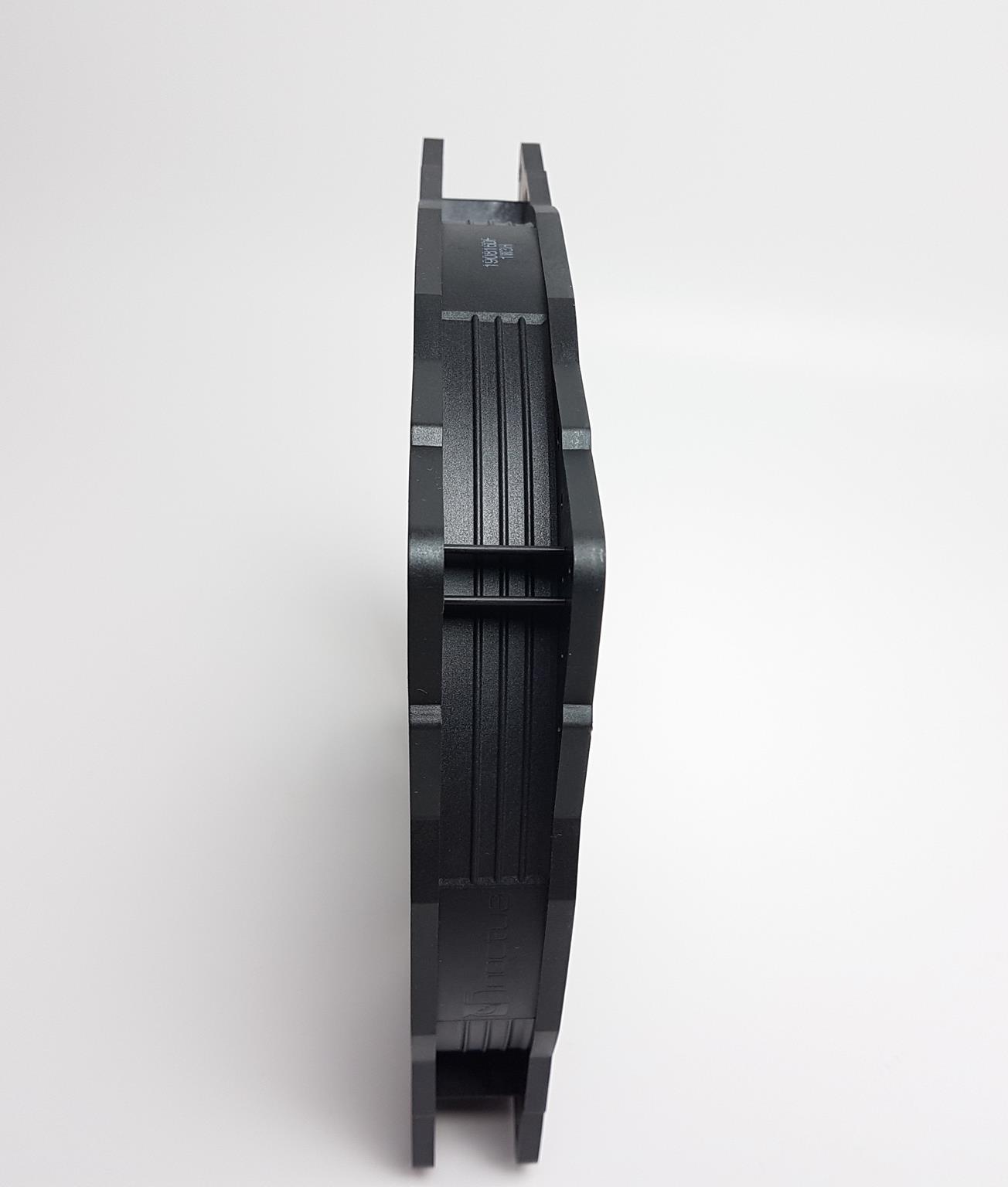 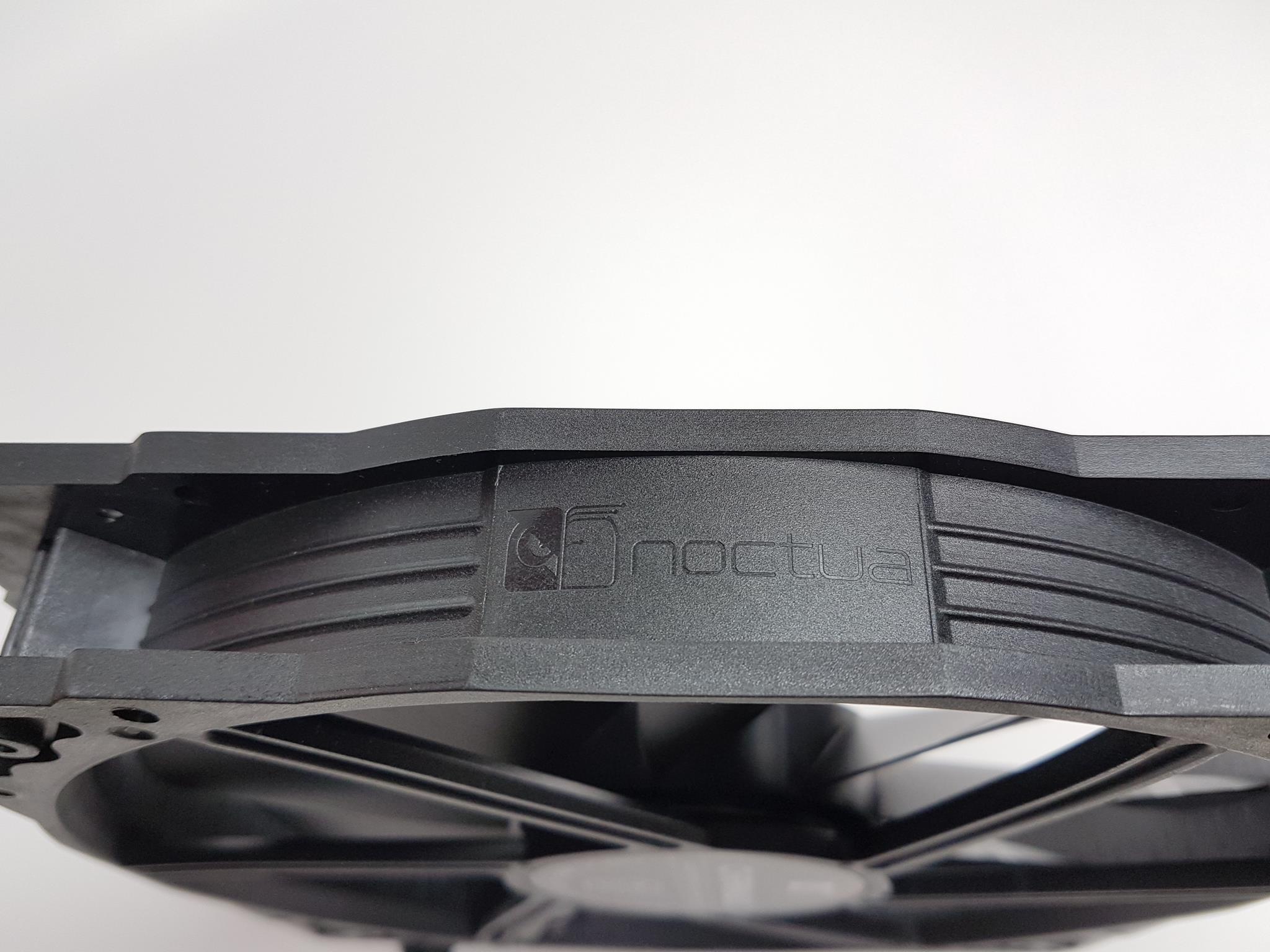 There is a Noctua brand name and logo embossed on one side of the frame. The side from where the power cable is coming out has two arrow symbols. These symbols help the users identifying the direction of the airflow and blades’ spin direction. 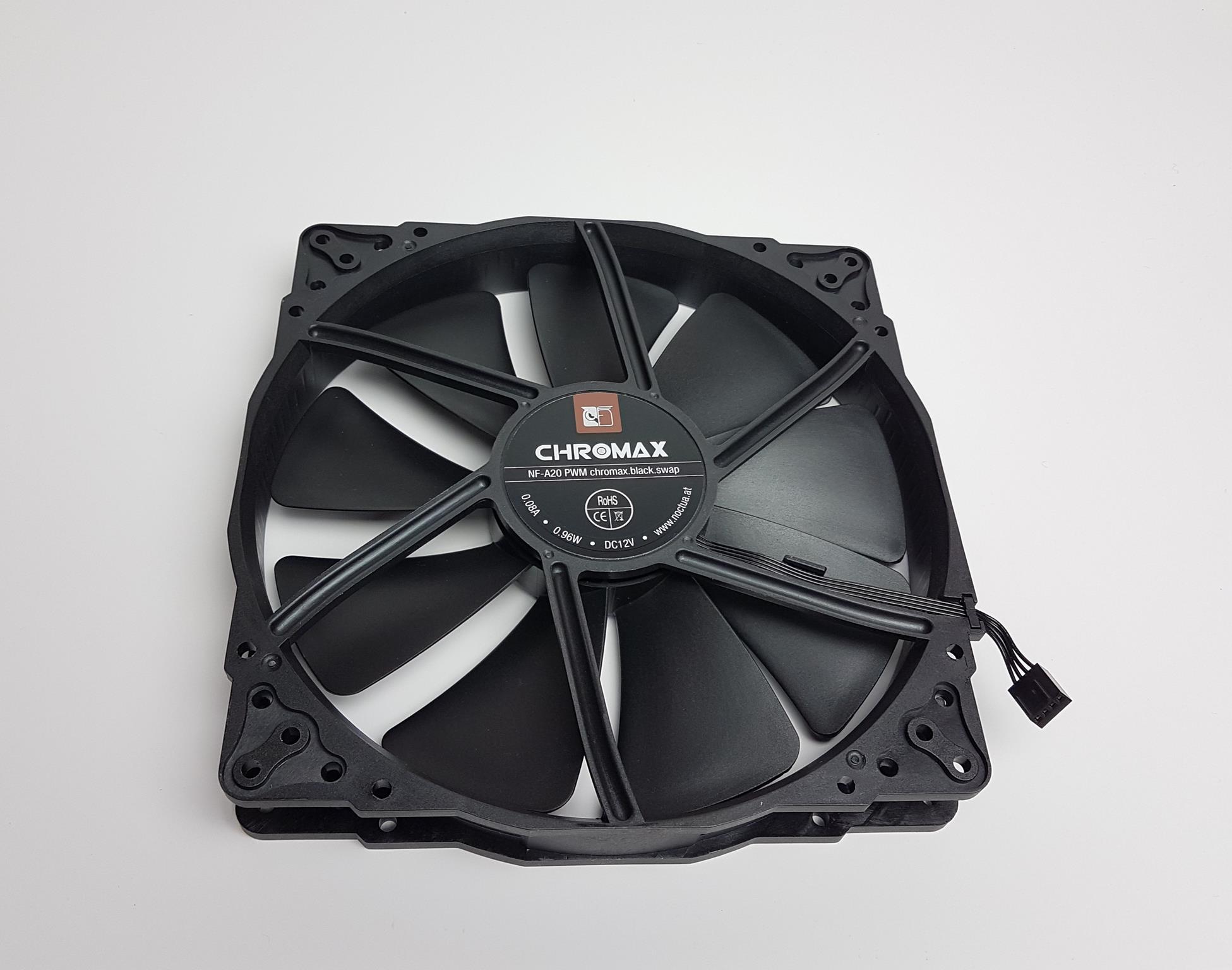 There is a 6-arms assembly on the backside of the frame holding the motor and blades. One of the arms has a latch on the sideway which is holding the wires of the cable. The NF-A20 features the SSOs bearing. With SSO2, the rear magnet is placed closer to the axis to provide even better stabilization, precision, and durability. The fan uses Noctua’s custom-designed NE-FD1 PWM IC that integrates Smooth Commutation Drive (SCD) technology. By providing smoother torque impulses, SCD suppresses PWM switching noises and thus makes the fan quieter at low speeds. The chromax edition fans sport a CNC milled bearing shell made entirely from brass.

Now, let’s take a look at the specifications of the fan: 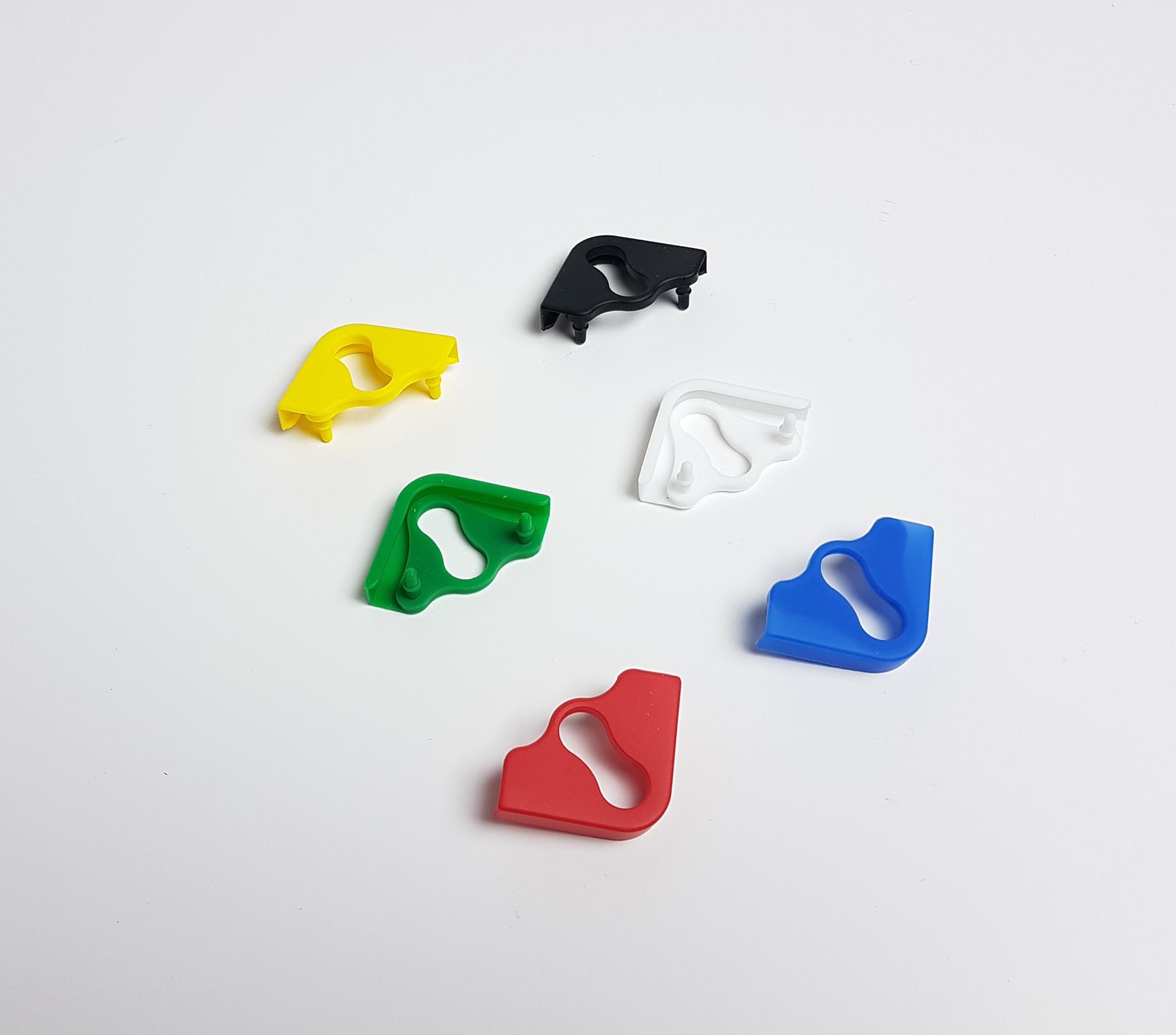 Noctua has included 6 NA-SAVP6 chromax.color anti-vibration pads in the box. There are 4 pads in each color. This would mean, the user has to buy a dedicated NA-SAVP6 chromax box in the desired color to complete the 8 pads per fan configuration. Obviously they have done it to reduce the already premium price tag on these fans.

Now, it is time to take a look at the NA-SAVP6 chromax.color anti-vibration pads. 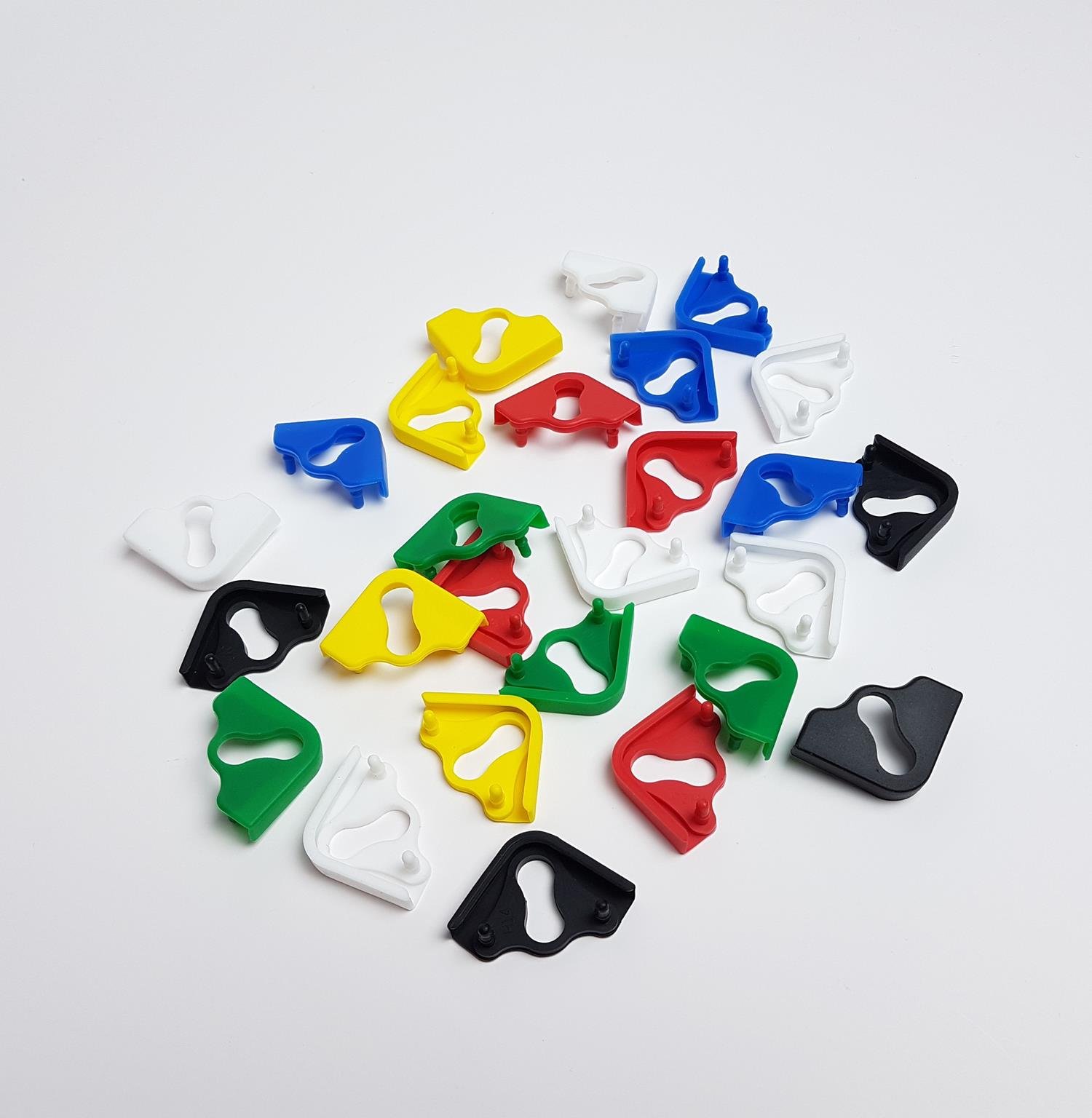 These pads are available in 6 colors:

The pads are made of extra-soft silicone and are tear-proof. Their task is to reduce the noise from the vibration while ensuring the compatibility with the standard fan mounts.

These pads are compatible with:

Other than the above-listed fans, these pads are not compatible with any other Noctua or third party fans.

Here are a few pictures of the Noctua NF-A20 PWM chromax.black.swap: 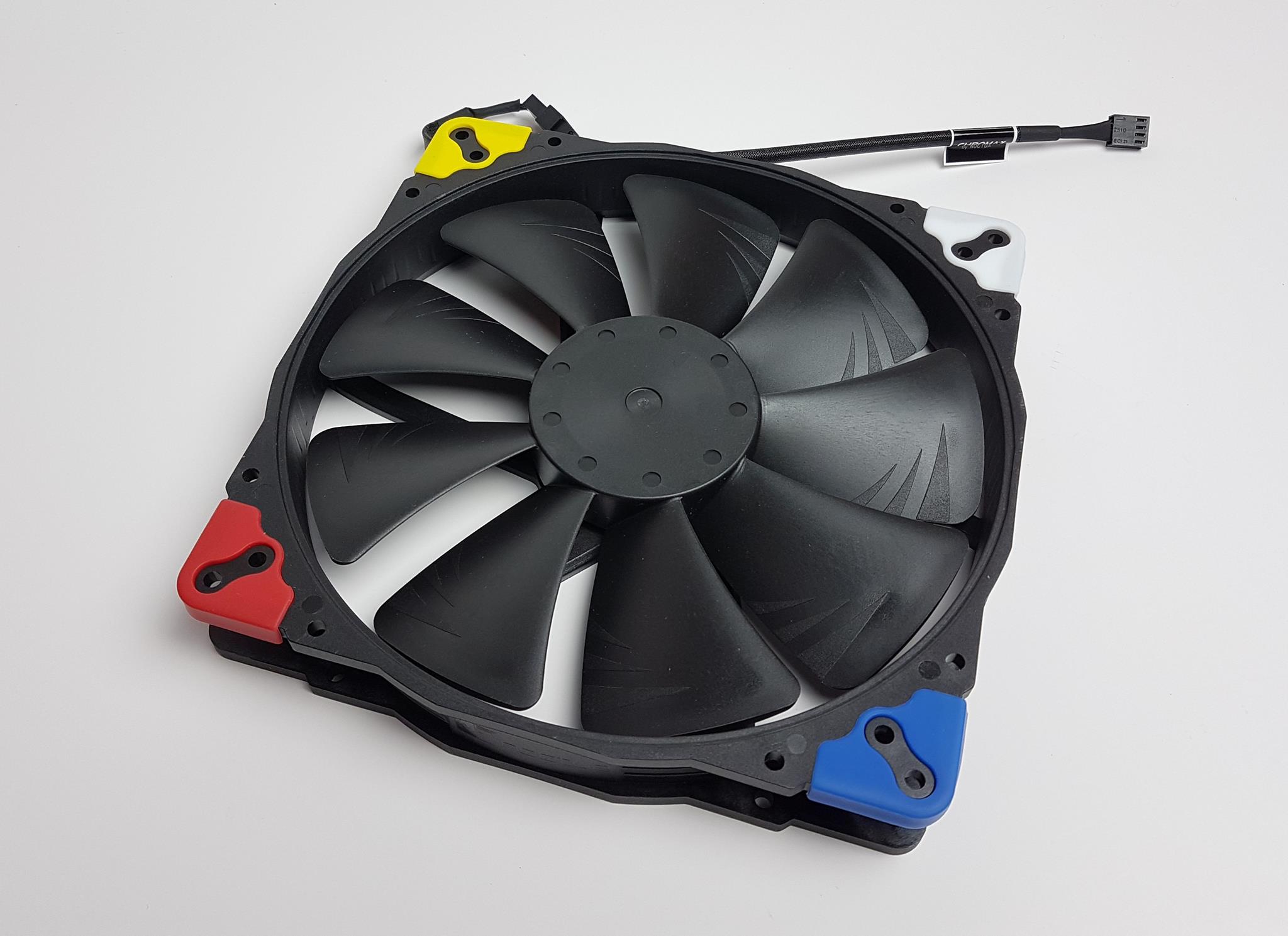 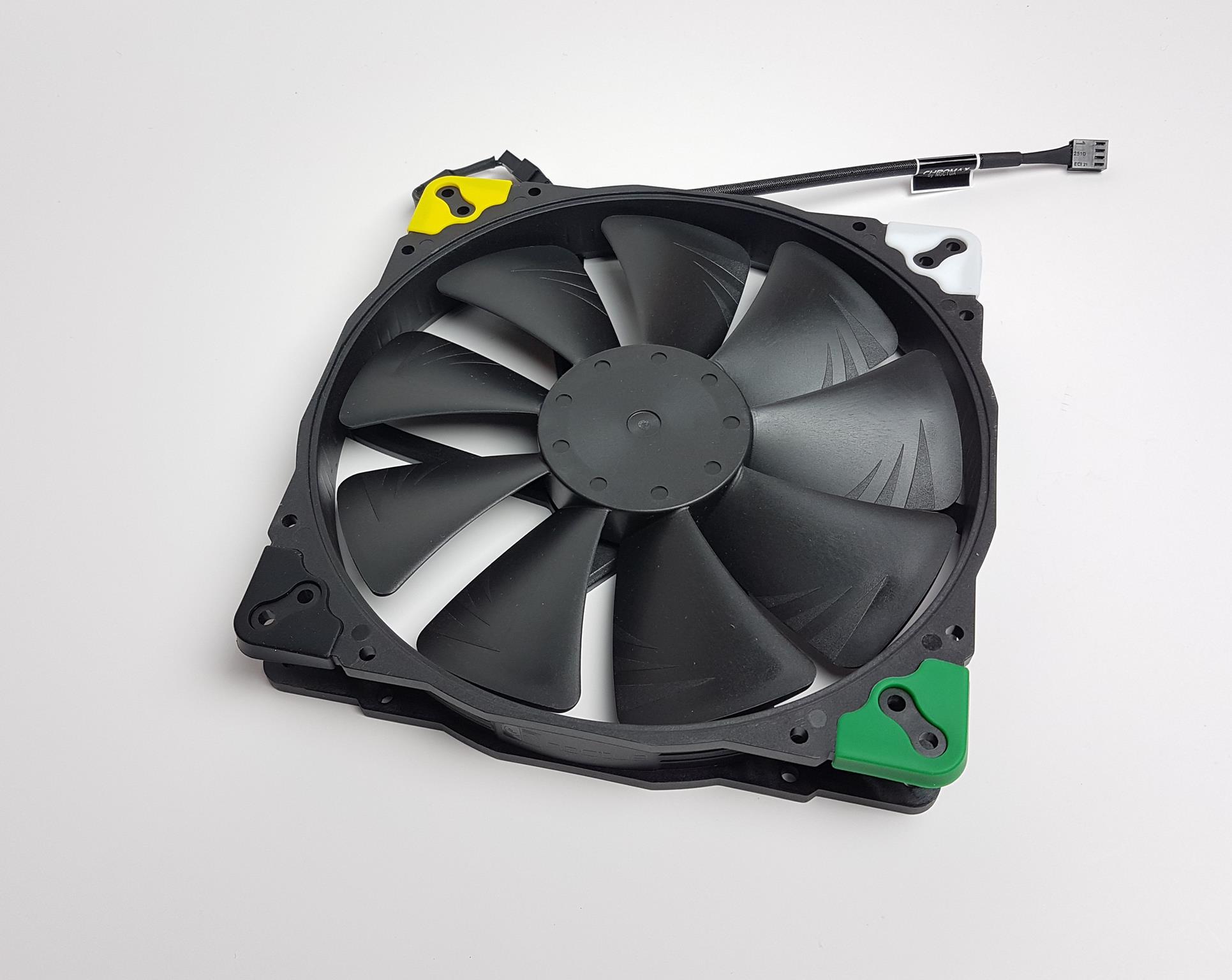 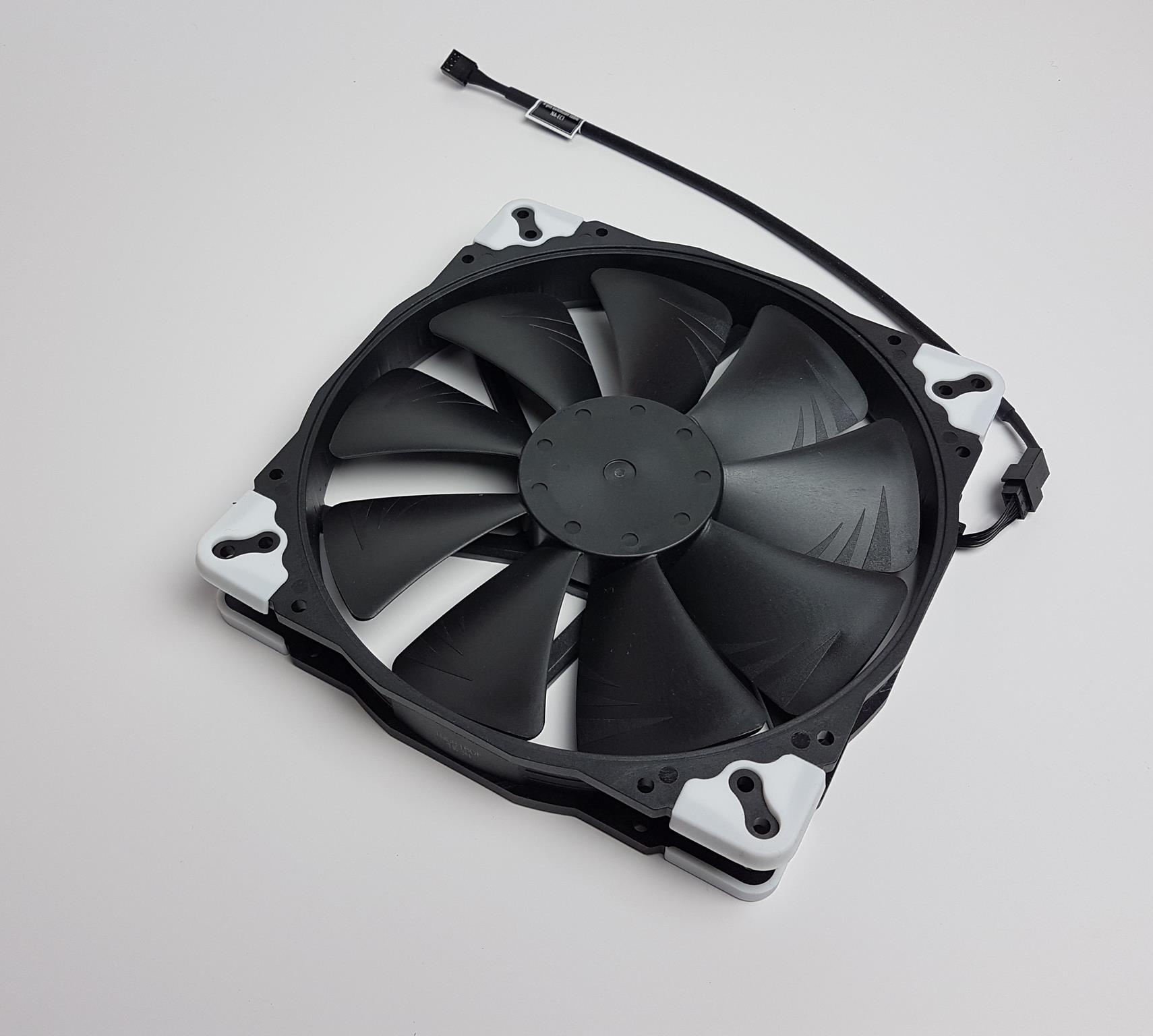 Here is a graph showing the speed of the Noctua NF-A20 PWM chromax.black.swap at various PWM duty cycles. These cycles are mentioned as %age in the graph on the X-Axis. 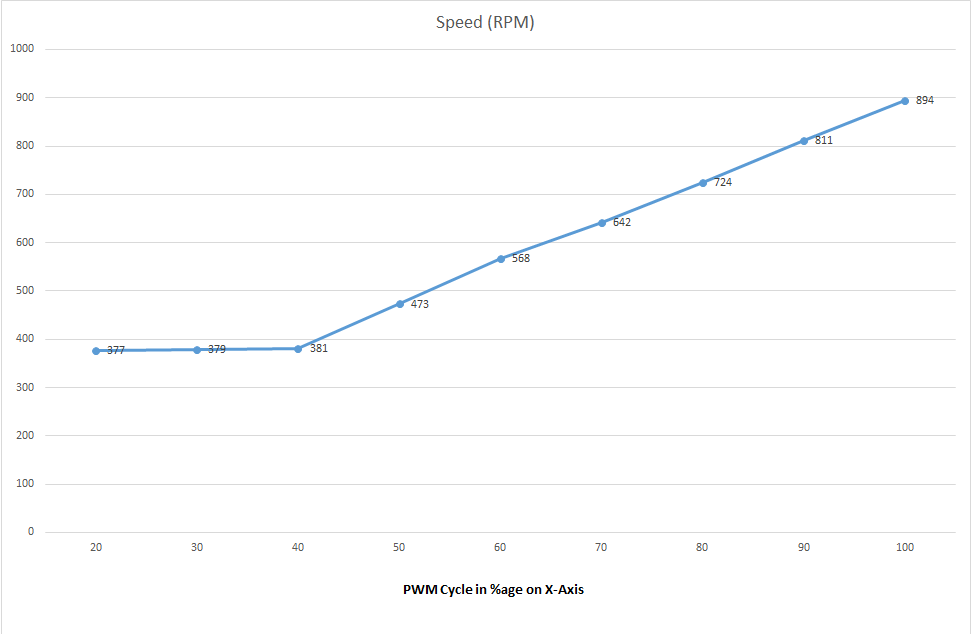 Damn! These fans are silent! Literally in the figure of speech! Our sound meter was showing them to be at 42 dB(A) with 34 dB(A) ambient sound level.

Noctua has released black versions of their fans in the chromax series along with more supported accessories. We have taken a look at their NF-A20 PWM chormax.black.swap fan and NA-SAVP6 chromax accessory. The NF-A20 PWM chromax.black.swap is a black version of the regular and award-winning NF-A20 which is in Noctua’s typical beige and brown color scheme. The black edition has retained all the design features of the regular version giving this fan a very edge over the competition as users now create truly stealth builds thanks to all black color and further the user can customize the colors by using the colored chromax accessories to color coordinate the build.

The fan is in total black color including the blades and frame. The dimension of the fan is 200x200x30mm. The thickness of the fan is 30mm which is more than the more common 20mm thickness in this sizing. Noctua is not leaving any corner uncovered. From the design perspective, the Noctua NF-A20 PWM chromax.black.swap has flow acceleration channels on the blades to speed up the airflow at the outer edges of the blades. The frame is based on AAO (Advanced Acoustics Optimization) concept which is by using the anti-vibration pads, stepped inlet design on the frame’s edges and inner surface microstructures all factors help increase the fan’s efficiency and reducing the noise. The fan is using Noctua’s SSO2 bearing which is an advanced version of their legendary SSO bearing. In SSo2 bearing, the rear magnet is placed closer to the axis to provide even better stabilization, precision, and durability. The fan is using the custom-designed PWM IC which is using the SCD suppression for PWM switching noises.

Noctua has included 24x NA-SAVP6 chromax anti-vibration pads in a total of 6 colors (4 pads in each color). The 4 pads will cover one side of the fan. In order to cover both sides of the fan, the user would need to buy NA-SAVP6 in the desired color. This approach is helping Noctua reducing the already premium price tag on these fans. The fan comes with a 1x 30cm NA-EC1 extension cable. The modular approach helps the user in customizing the color of the power cable as well. The NA-EC1 is also available in 6 colors. These fans can also use NA-YC1 y cables which are also available in 6 colors. Y cables are not bundled. The single box of NA-SAVP6 packs 16x pads in the mentioned color. A single box is enough for two fans. These pads are compatible with the Noctua NF-A20 series of the fans as mentioned in the closer look section above. No other fan from Noctua or a third party is compatible with these.

The Noctua NF-A20 PWM chromax.black.swap is listed at USD/Euro 34.90 at the time of the review. A single box of NA-SAVP6 chromax.color is listed at USD/Euro 6.90. The price on the fan seems steep but given the black color coating, bundled NA-SAVP6 pads, and NA-EC1 makes up for it and the fan has 6 years warranty. The Noctua NF-A20 PWM chromax.black.swap packs the same performance punch as is on the regular NF-A20 versions. The fan is 30mm thick which is 10mm more than what we see on the other fans available in the market. At such low noise levels, this level of performance coupled with colorful pads for color-customization makes these fans ideal for chassis airflow solutions and come recommended by us.

We are thankful to Noctua for giving us the opportunity to review their NF-A20 PWM chromax.black.swap and NA-SAVP6 chromax.color.