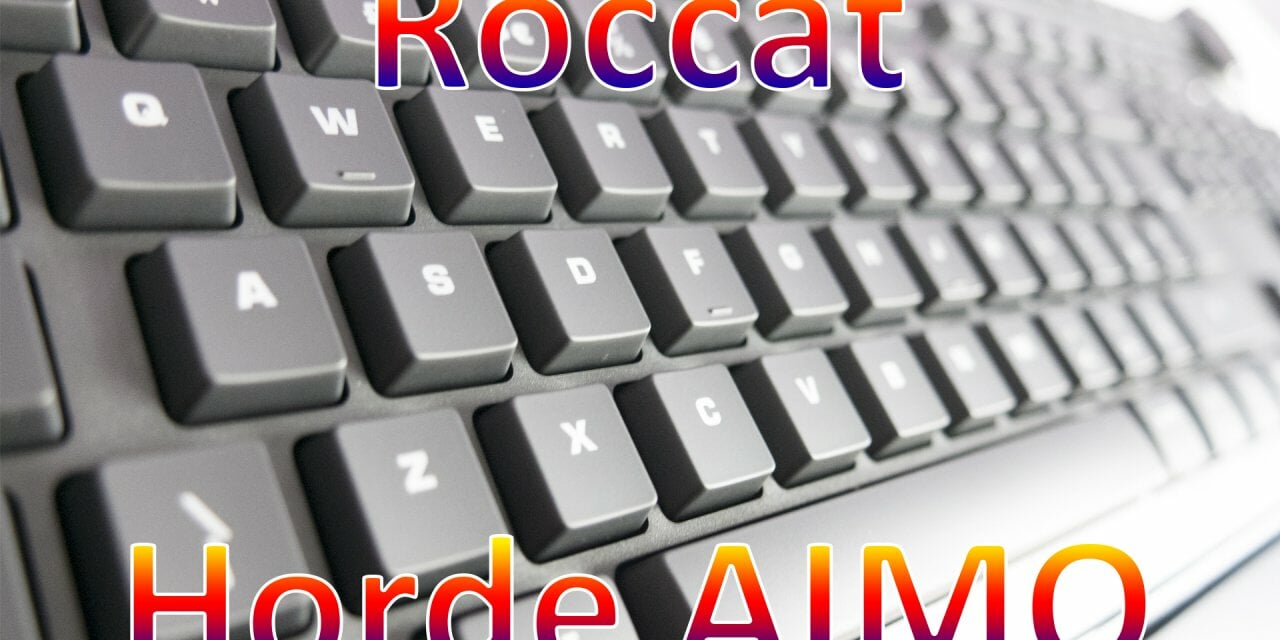 Following on from our review on the Kone AIMO, today, we take a look at the Horde AIMO. ROCCAT’s AIMO technology allows users to easily link their peripherals together to further customize them and get the most out of them. There are some pretty cool lighting effects you can get going when everything is all linked up. Roccat is known for innovation within the peripheral industry and the Horde AIMO is no exception. Featuring what they call Membranical switches, the Horde AIMO is a Membrane keyboard that offers a similar approach to key input as a mechanical keyboard would, while remaining membrane at its core. The Horde AImo is also chalk full of useful and amazing features and functions that any user will be able to use to make their lives easier. Whether you’re a Gamer, enthusiast or just a standard PC user, you’ll be able to make use of what the Horde AIMO has to offer. RGB lighting aside, it features 5 low-profile macro keys a tuning wheel, media keys and a number of function keys. Users’ looking to make the most of this keyboard will want to download Roccat’s SWARM Software which will allow them to link it with their other AIMO compatible products and customize it until their heart is content.

Roccat has gone with a nice big image of the Horde AIMO on the front of the box and while there is minimal info here, they have highlighted some of the more important features. From the detachable palm rest to the tuning wheel and AIMO compatibility, this keyboard surely has a lot going for it. 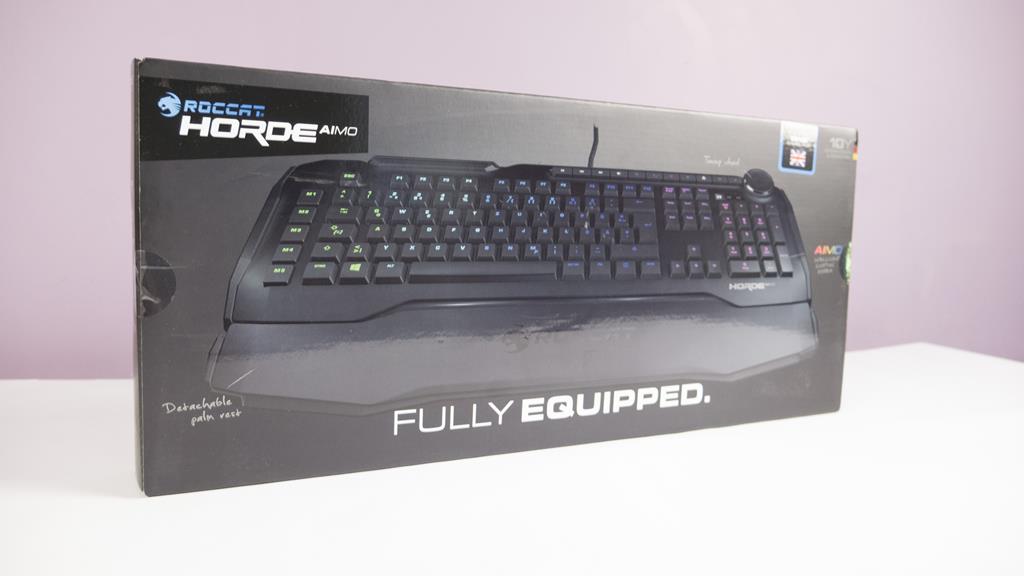 Flipping over to the back side of the box and there is loads more information here. Roccat even going into a bit more detail on some of the many features. They let you know just what the Tuning Wheel and Membranical keys have to offers. There is also a quick Tech Specs listed as well as the Package Contents so there are no questions about what is in the box. 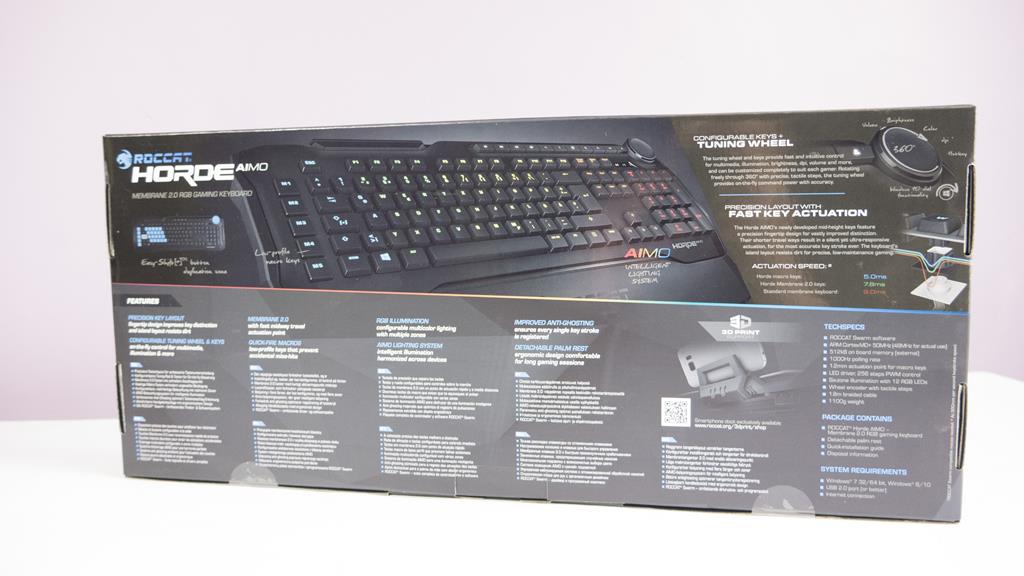 Getting everything out of the box and the palm rest and keyboard come wrapped separately. We also have a few stickers alongside a couple of guides. This keyboard looks absolutely amazing and has some pretty great features. Let’s just hope it performs as well as it looks like it should. 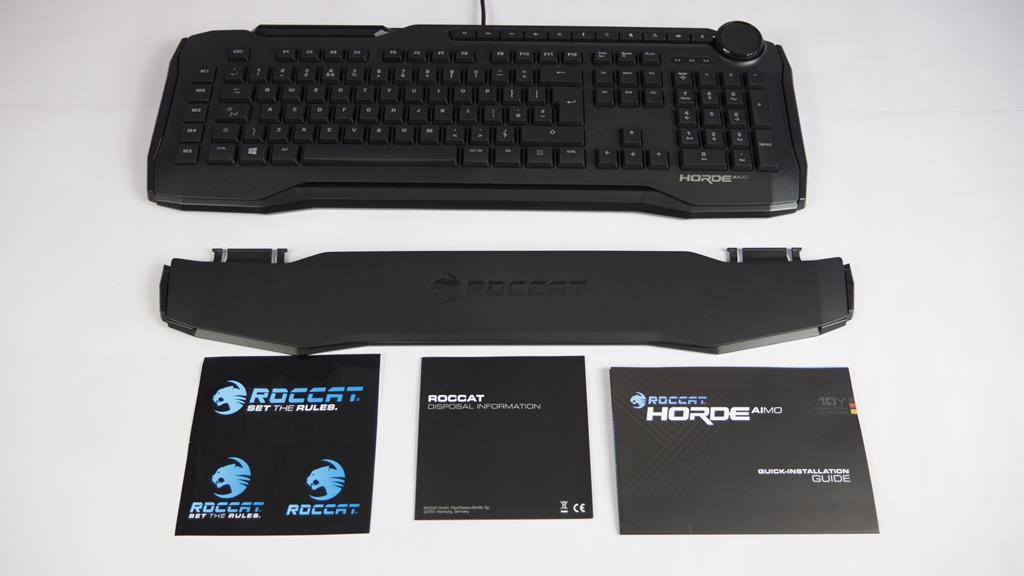 When considering all the extra keys the Horde AIMO has, it isn’t overly large. This keyboard should still fit in most anywhere a standard sized keyboard with numpad would fit.  Looking at the below image and I am personally in love with the tuning wheel and anyone who knows me will know this. The Horde AIMO also comes in both black and grey models which is always nice to see. 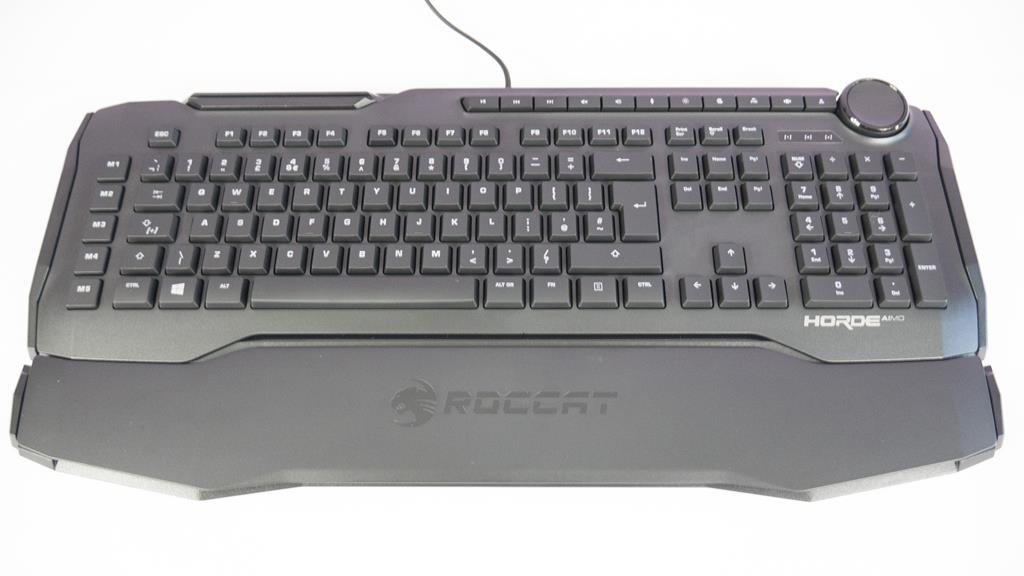 The Macro keys are low-profile and this will hopefully make sure they are not hit on accident but are still easily used when needed. Not having them the same height as the other keys is a good decision and should save users from quite a bit of frustration as they should be able to tell the difference between them and the other keys without having to look. This can be the difference in hitting shift to run or hitting M3 to forge an item! 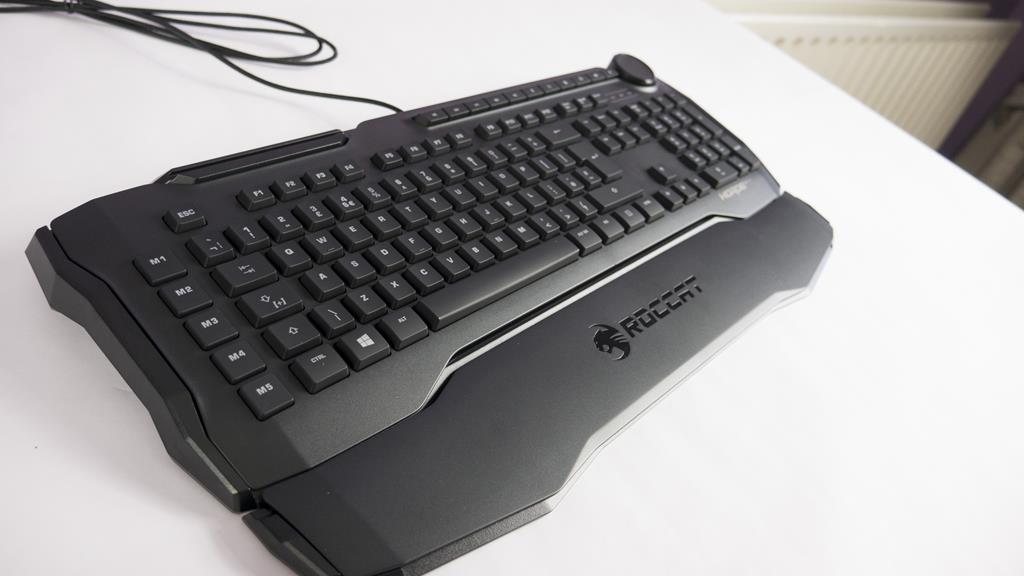 While there is only 5 of them, we all know ROCCAT loves to allow users to use the SHIFT + technology which lets you easily set a second set of binds to each key. All of this can be configured in the SWARM software which is downloaded directly from the Roccat website. 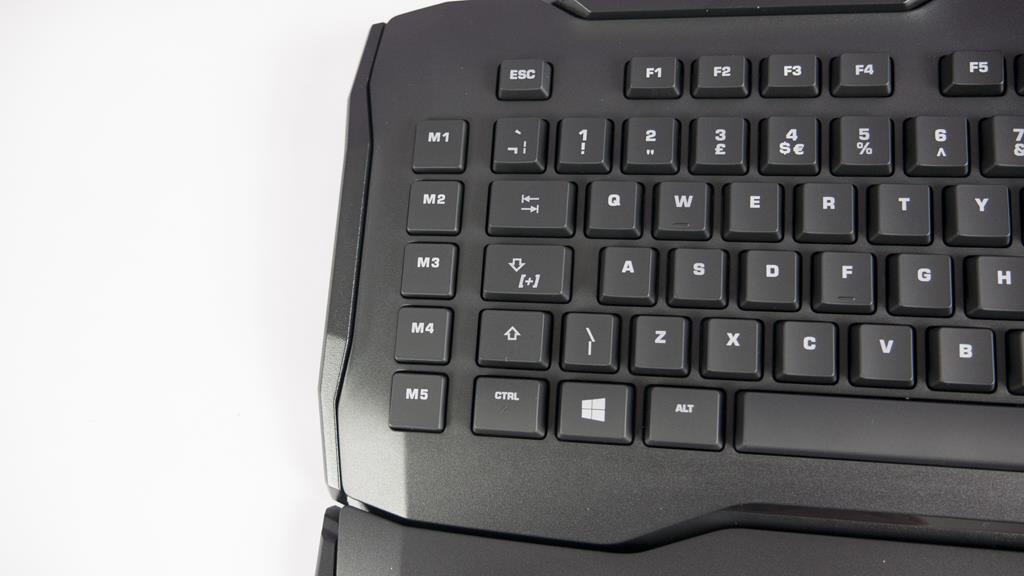 Not only does the Horde AIMO feature a tuning wheel, it has a whole host of extra buttons to the side of it! My favorite, of course, being the extra media keys for easy navigation through playlists and the likes while working late into the night! Roccat really says it best on their website “The Tuning Wheel and keys provide fast and intuitive control for multimedia, illumination, brightness, dpi, volume and more, and can be customized completely to suit each gamer”. The Tuning Wheel is also fully compatible with the Windows 10 dial functionality which opens up the door for even more customization. 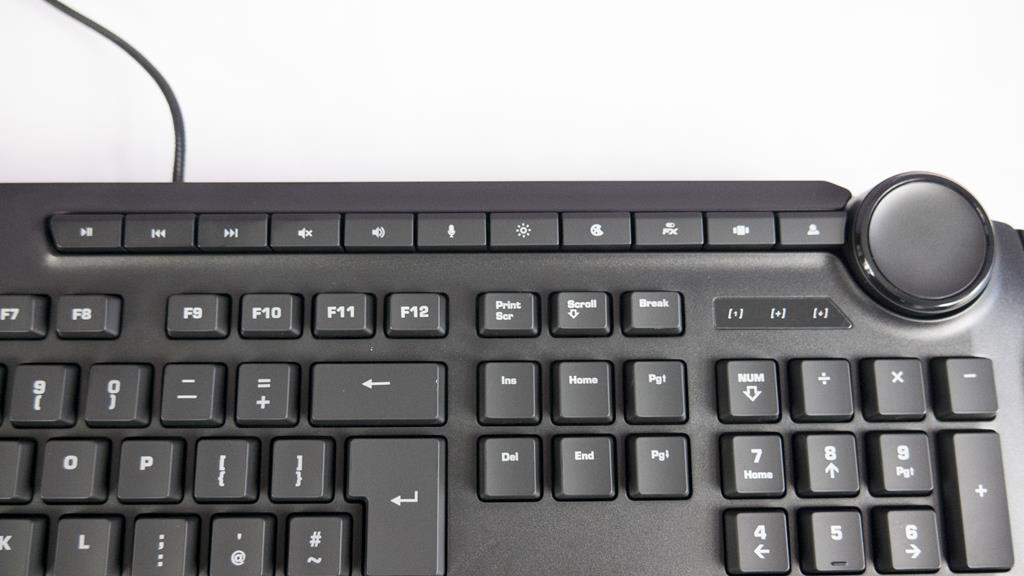 What would a palm rest be with a Roccat logo in the middle of it? This is placed so it shouldn’t be an issue but even if you do rest your palms on it, it shouldn’t cause any discomfort. 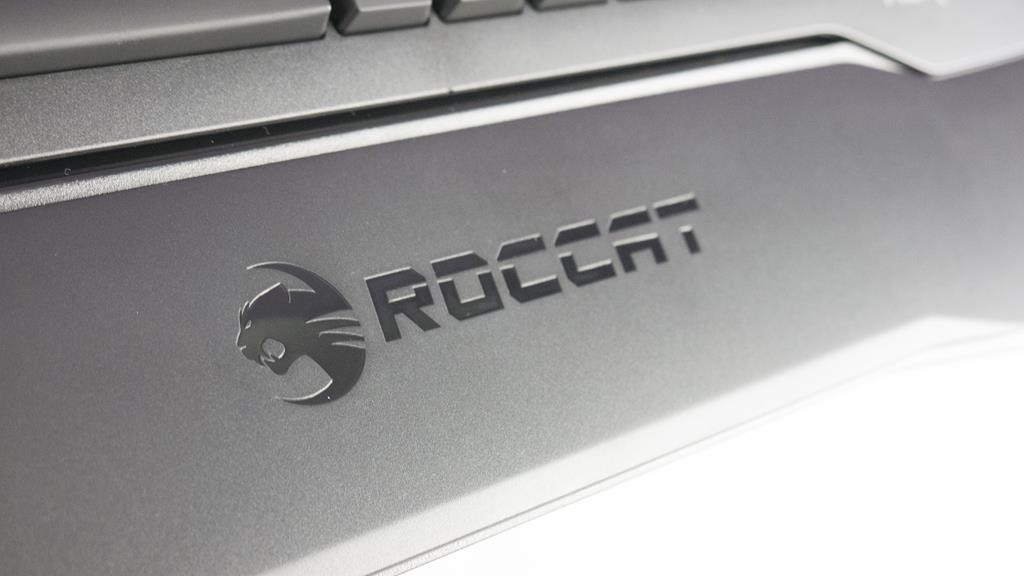 Flipping the Horde AIMO over before we get into the LEDs and we can see where the palm rest attaches to the keyboard towards the bottoms so you don’t have to worry about the palm rest moving around when using it. Also,m there are two feet towards the top that will allow for a more ergonomic feel when typing. 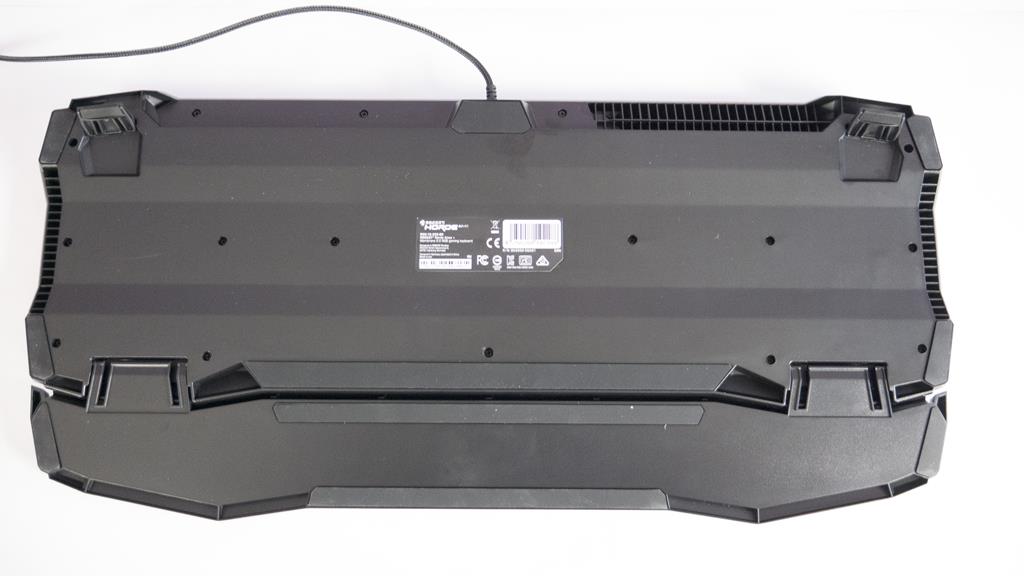 The backlighting on the keys is very subtle and this was done on purpose due to the types of key caps Roccat wanted to use for their Horde Aimo. For a better look at the lighting, please also make sure to check out the video below. 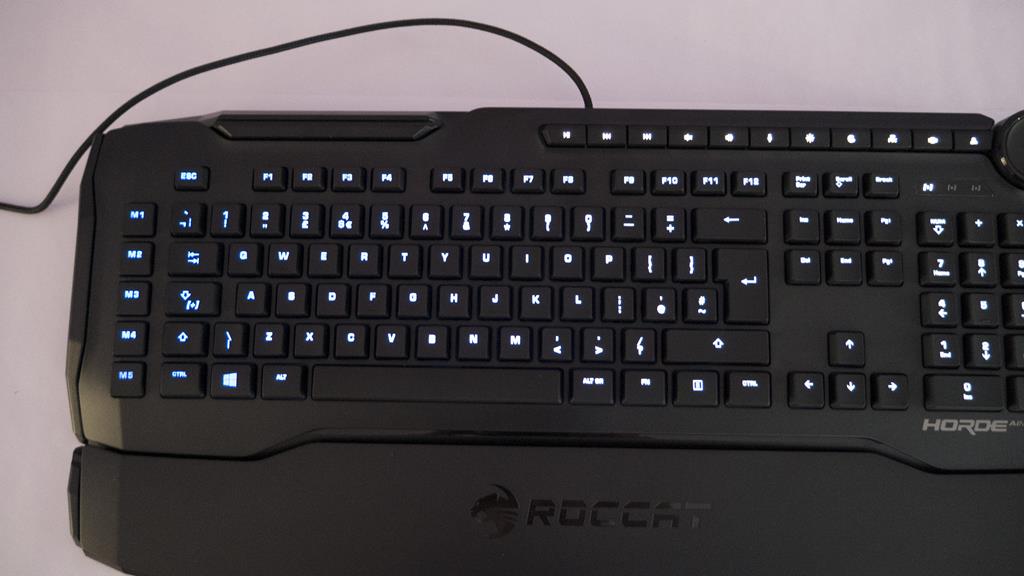 Jumping straight into things and the Horde AIMO offers solid performance for a membrane style keyboard. With it’s improved Anti-ghosting, low-profile media keys and tuning wheel, this board really offers a lot. When you then also throw in RGB backlighting and the AIMO infrastructure, it just keeps getting better. Using this for gaming and day to day use I must say, it wasn’t quite as bad as I was expecting it to be. I have been using my current mechanical board for near on 3-years so after the initial break-in period of the Horde AIMO, I was pleasantly surprised by what it had to offer. The keys actuation was very smooth and thanks to the upgraded anti-ghosting feature, there was no issue with hitting too many keys or hitting them too quickly. During all my testing I didn’t run into any issues with a key press not registering which is all you can ask for. For those looking for the extra features this has to offer, you will be very happy with how it performs.

It’s safe to say Roccat hit the design aspect out of the park on this one. The overall size of the keyboard isn’t much bigger than your standard board even when including all the extra buttons and tuning wheel. Making the macros keys low-profile when compared to all the others was a great decision. This allows the user to determine between a macro key or the shift/ctrl key with ease and without having to look, meaning they hit the right one every time. The tuning wheen is a big hit for me along with the buttons next to it as they offer some much functionality for users and allow you to control things on the fly without the need for software once all set up. I also personally liked the more subtle approach to the backlighting due to the keycaps being used. A lot of people want things to be massively bright but if you ever need to actually look at your keyboard in the dark a subtle light will be much easier for your eyes to adjust to quicker. All in all, Roccat have done a great with the design as mentioned. 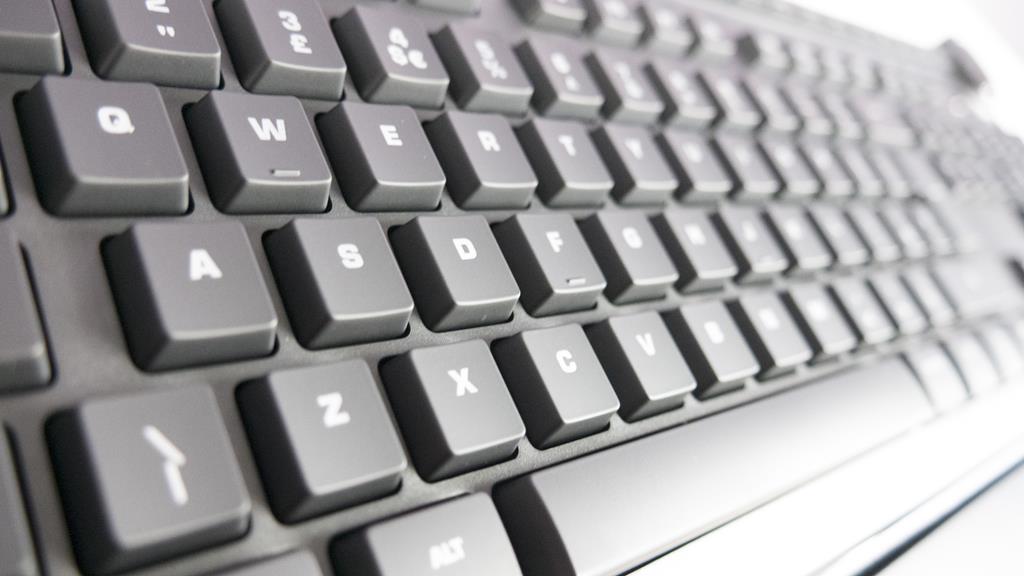 Coming in at around £90 here in the UK at the time of review, the Horde AIMO surely has a lot to offer. For the money, you are getting a keyboard that has a plethora and customization options available for it. Furthermore, it offers great performance for a membrane keyboard in a good looking package. If you’re not dead set on having a mechanical keyboard and would rather something with a ton of features, well then, this may very well be the keyboard for you!

Many thanks to Roccat for sending in their Horde AIMO for this review. 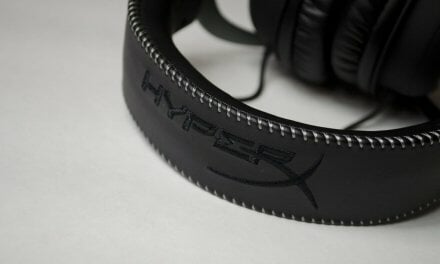 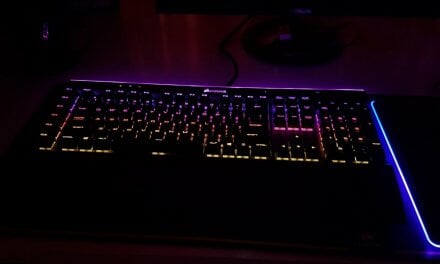 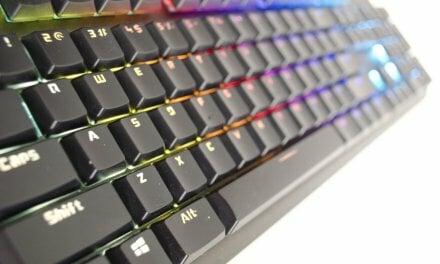 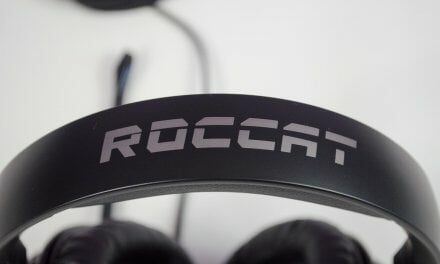