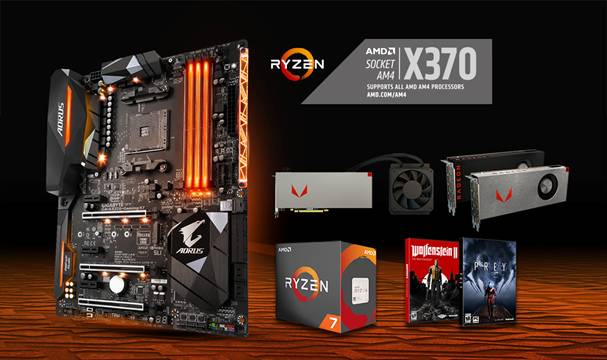 Taipei, Taiwan, September 8th, 2017 – GIGABYTE TECHNOLOGY Co. Ltd, a leading manufacturer of motherboards and graphics cards, has partnered with AMD to present its GIGABYTE GA-AX370-Gaming K7 motherboard for the Radeon™ RX Vega64 Bundle. The bundle is a value loaded package that offers consumers the opportunity to experience the power of the GA-AX370-Gaming K7 motherboard equipped with the AMD Ryzen™ 7 CPU and Radeon™ RX Vega64 GPU. The bundle offers plenty of firepower at exceptional value for those who want to build powerful gaming rigs. The bundle will be sold by 33 different E-tailers as listed in the chart below and will be available until the end of September 2017.

The award-winning 8-core GIGABYTE GA-AX370-Gaming K7 is a high-end motherboard packed with many impressive features. Such features include RGB Fusion with LED Customization which allows the user to customize multiple zones to match the user’s style, Smart Fan 5 which helps keep the PC cool while maintaining high performance, dual ALC 1220 codecs to provide high audio quality, Sound Blaster X-Fi MB5 to boost audio quality, and USB DAC-UP 2 to provide low noise power and compensate against voltage drops. With these and many other features, the GA-AX370-Gaming K7 is a great fit for the Radeon™ RX Vega64 Bundle. The bundle offers incredible value for those who are interested in building high-end PCs with one of the best motherboards on the market.

Enthusiasts will be hard pressed to find another package deal that provides as much value as this bundle does. It’s available for a limited time only so for those interested in the bundle, please check with your local E-tailers.

To learn more about AORUS: http://gb.AORUS.com/

To learn more about GIGABYTE: http://uk.gigabyte.com/