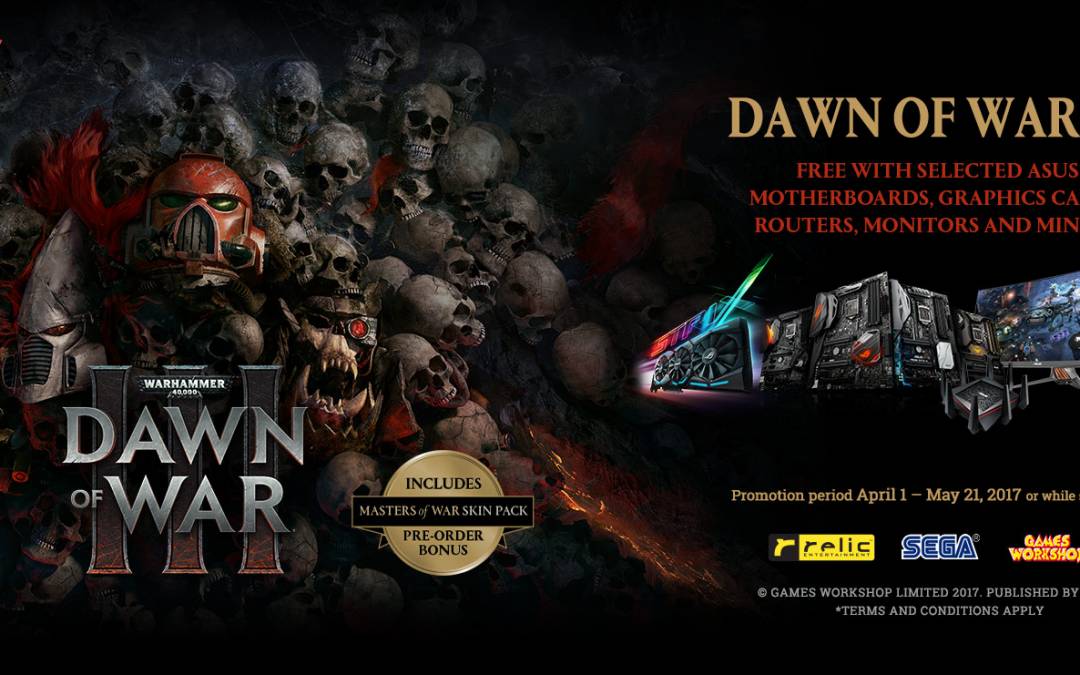 * Promotion is valid on purchases made from 1st April to 21st May, 2017 or while supplies last

* Game download key can be redeemed from 13th April to 4th June, 2017 or while supplies last on the event microsite (www.asus.com/event/2017/rog/DOW3)

Taipei, Taiwan (1st April, 2017) — ASUS today announced that all purchases from 1st April to 21st May, 2017 of select ASUS gaming motherboards, graphics cards, monitors, networking products and mini PCs will be eligible to receive a free Dawn of War® III game download key and Dawn of War III Masters of War skin pack. Purchasers can receive their free game download key by registering on the event microsite (www.asus.com/event/2017/rog/DOW3) from 13th April to 4th June, 2017 or while supplies last. The game can be redeemed online at Steam® starting 27th April, 20171. The promotional offer is valid for purchases at participating e-tailers or resellers in Europe, the Middle East and Africa2.

Dawn of War III is an upcoming real-time strategy game, currently being produced by Relic Entertainment and Sega in partnership with Games Workshop, the creators of the Warhammer 40,000 universe. It is the third stand-alone title in the Dawn of War series and the first new release in the series since Dawn of War II: Retribution in 2011. It is set to be released for Microsoft Windows on 27th April, 2017.

ASUS is the world’s No.1 motherboard brand and has held this distinction for over 10 consecutive years. With over 500 million motherboards sold since 1989, ASUS motherboards are renowned for their reliability and ease of use. ASUS is also the world’s No. 1 gaming graphics card brand. All ASUS graphics cards feature industry-exclusive Auto-Extreme technology, a 100 percent automated production process that ensures premium quality and the best reliability.

Select ASUS motherboards and graphics cards offer ASUS Aura Sync3, an exclusive technology that sets a new standard for RGB lighting performance and ease of use. Aura Sync lets users combine and control the LEDs of all ASUS Aura-enabled products from a single application to achieve perfectly synchronized system lighting. From motherboards and RGB strips to graphics cards and beyond, Aura Sync enables a veritable symphony of light for ultimate personalization.