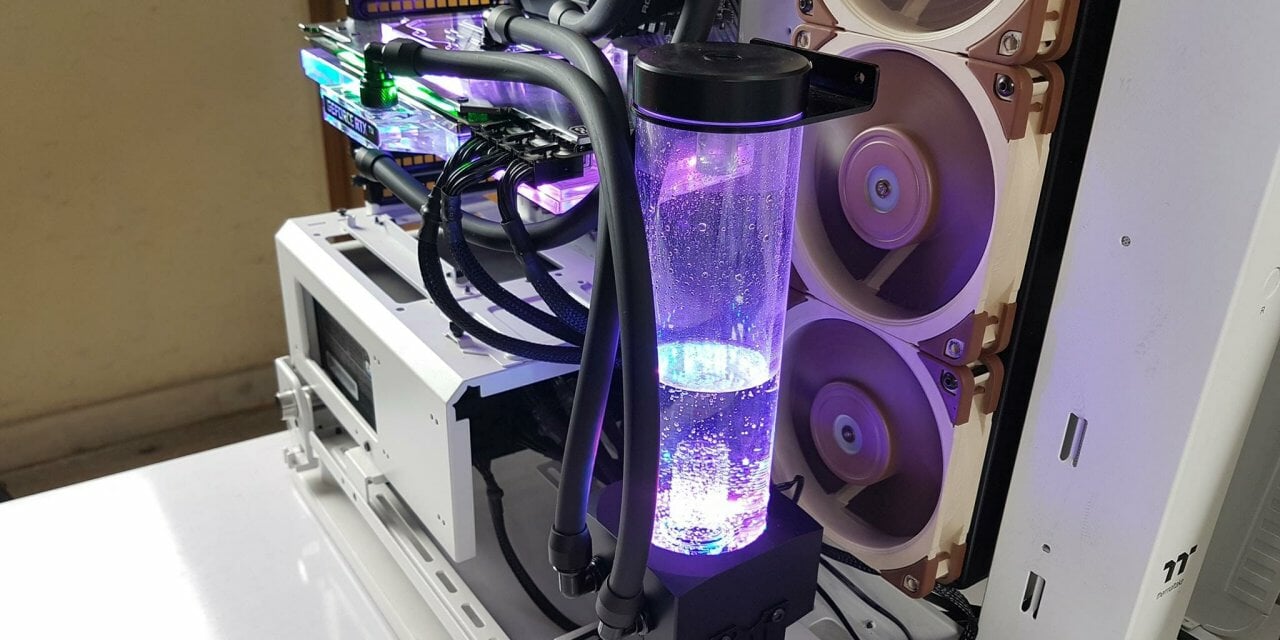 Alphacool is releasing a new series of reservoirs named Core. Two variants will be launched which are Core 200 and Core 100 AURORA D5/VPP. Previously, we took a look at the Eisbecher D5 AURORA Acetal/Glass 250ml and Eisbecher D5 250ml pump/reservoir units. This time we are taking a look at the new Core 200. We have a similar outlook on the Core series as is on the Eisbecher D5.

The new Core 200 AURORA has an Acetal tube whereas the pump top and the top cover are made of Acetal. One key difference is the placement of a metallic plate on the bottom of the unit. This clamp will provide additional support to the pump socket and also has mounting holes which the user can utilize for the installation of the unit in the PC Case. Another keynote is the elimination of a vented Plexi plate on the base of the socket housing. The reservoir tube is now going inside the socket frame which is not the case with the Eisbecher D5. Similarly, The tube of the reservoir has external threads. The benefit of this design change is the stability when handling the tube between the top cover and the pump top.

The Core 200 AURORA does not have an integrated pump. The user can use Alphacool VPP series pumps or D5 pumps with these units. Next, we have a filter port at the base of the unit, above the pump socket and we have integrated digital RGB 12 LEDs for some vivid illumination. Alphacool has retained the Light tower waterfall effect using the riser tubes. 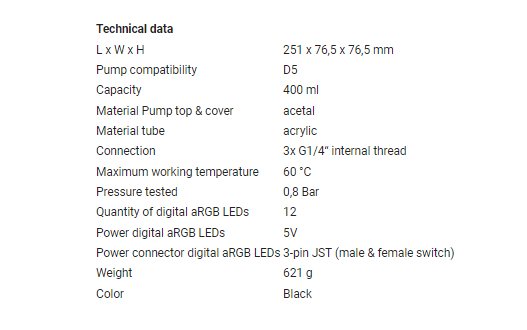 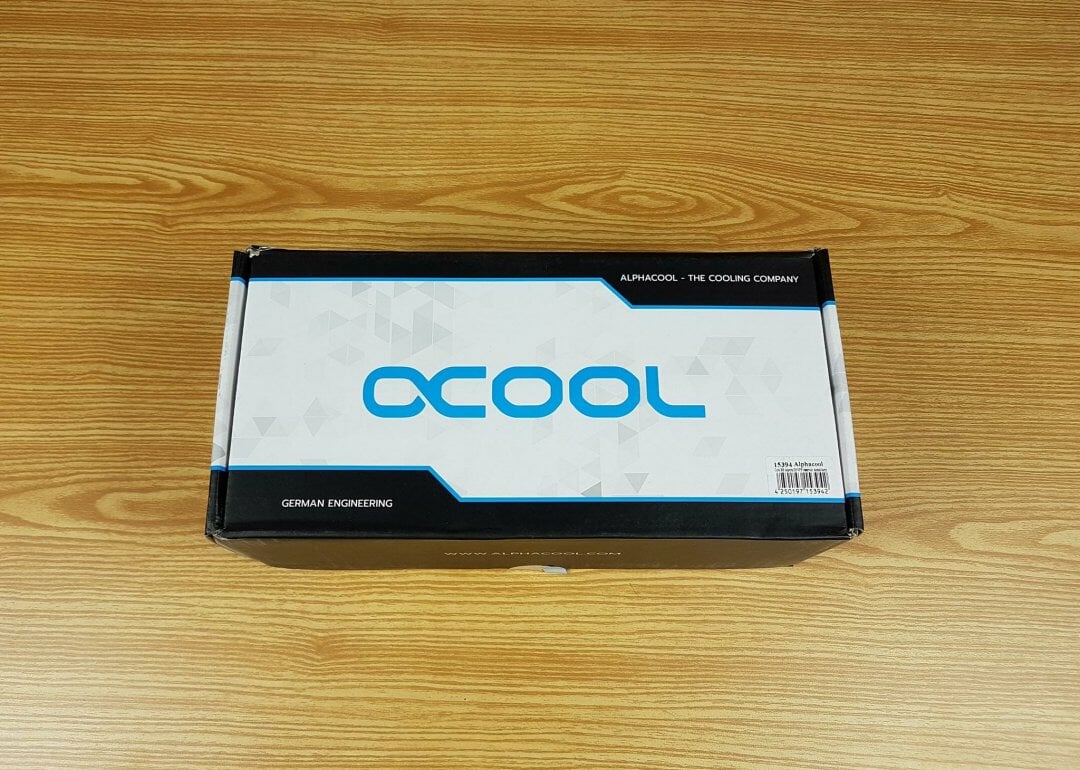 The unit is shipped inside a cardboard box in Alphacool theme. 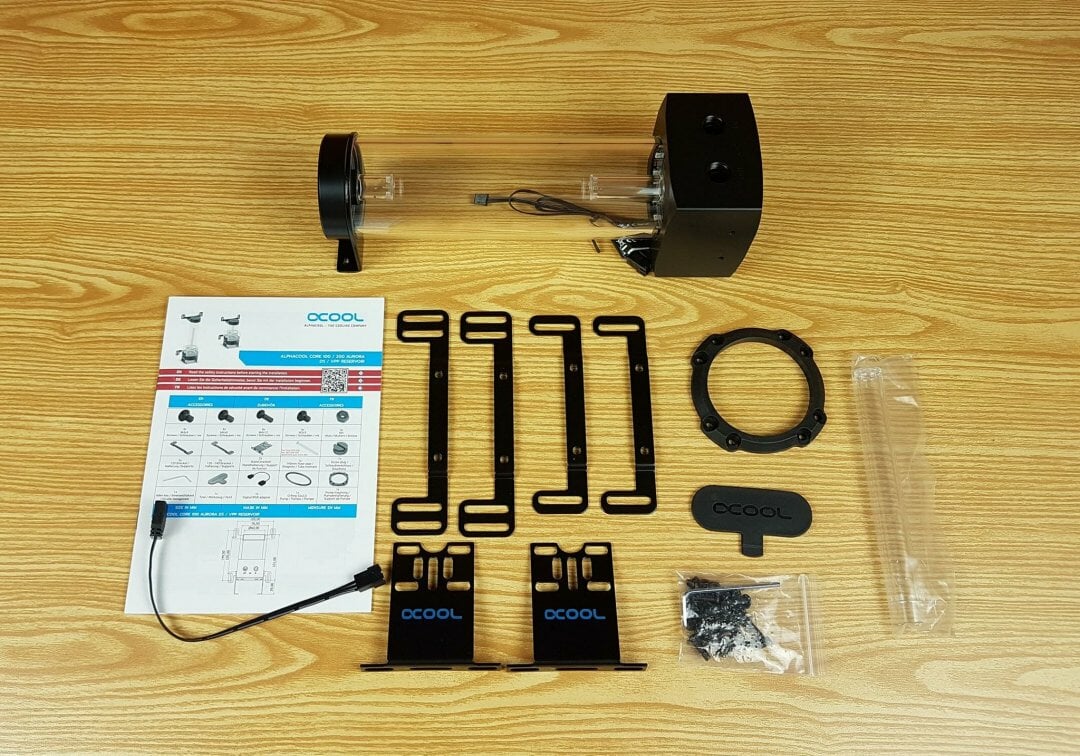 The above picture shows the contents of the box. 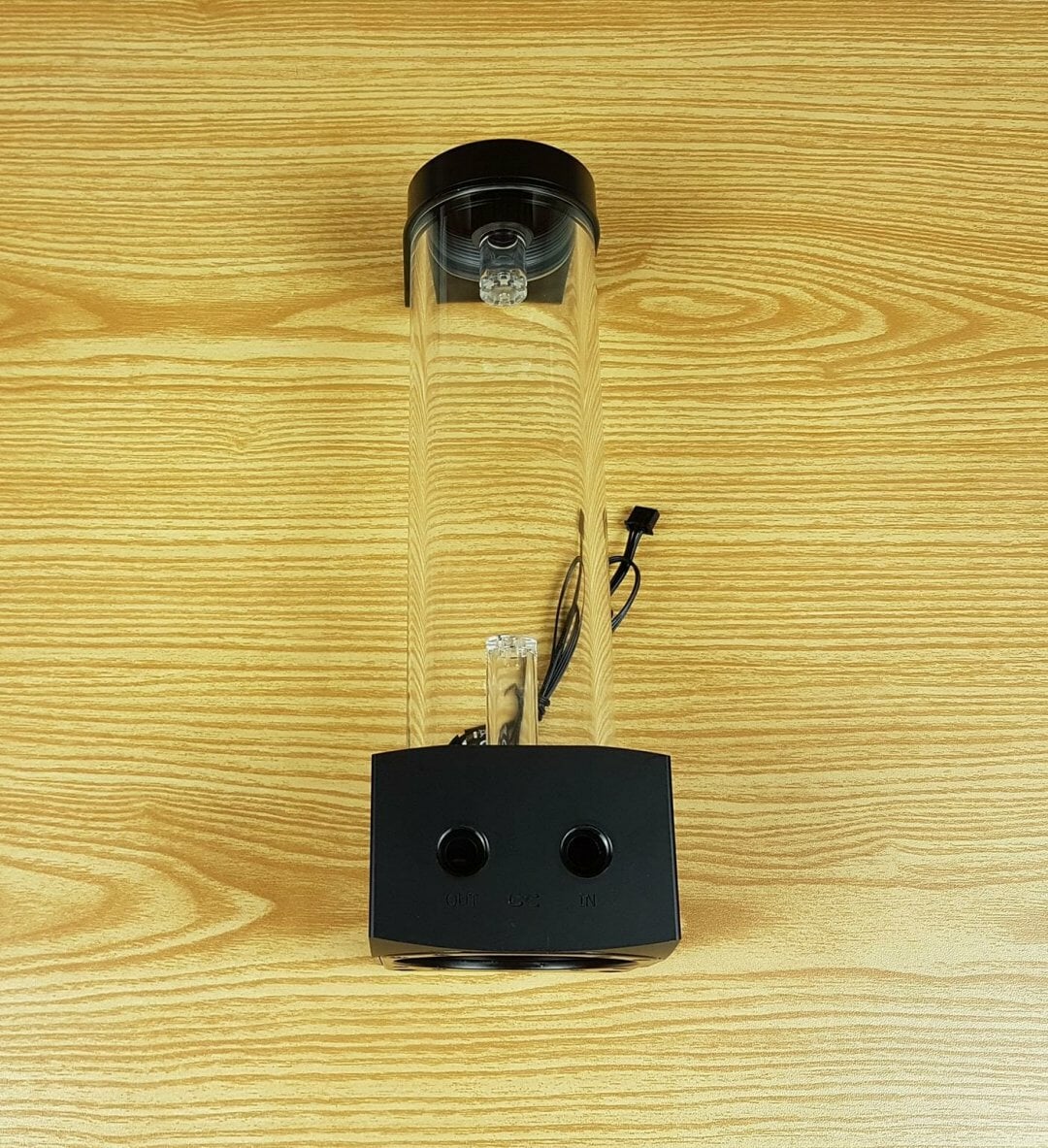 The Alphacool Core 200 has a larger reservoir made of acrylic and acetal materials. The tube is 60mm in diameter and has a capacity of 400ml of coolant. The dimension of the unit without brackets without the stand is 251×76.5×76.5mm. The dimension with the stand but without the bracket is 290×76.5×76.5mm. The unit comes with a ring-style bracket pre-installed on the top. This bracket is free and can be rotated in any direction. The 120 or 140mm mounting bracket can be installed on this ring bracket. 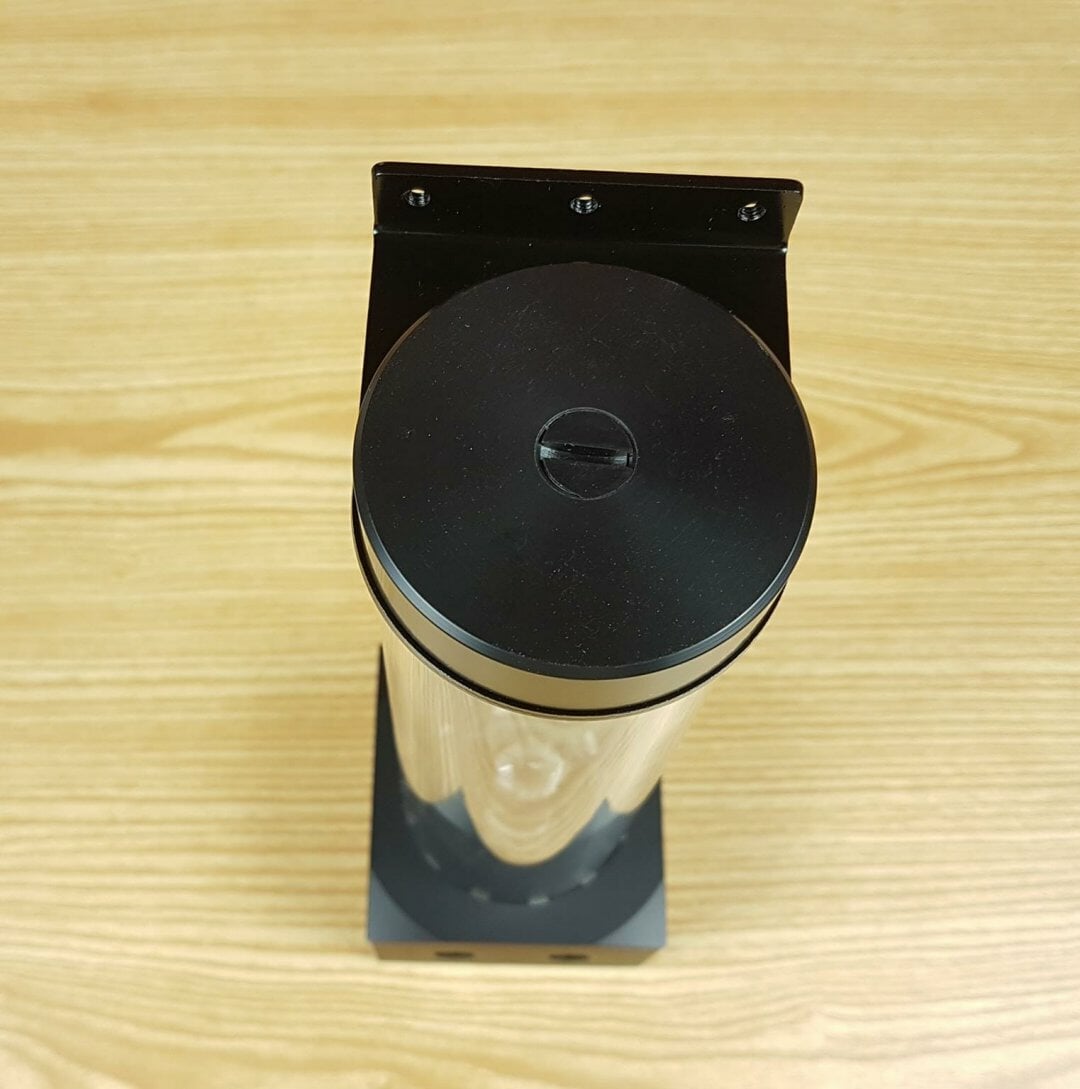 The top lid of the tube has a single G1/4” threaded port. The lid is made of Acetal material and is finished in black color. Alphacool has mentioned that this port can be used as a refill. The plug on the port is flushed which is a good design. The top lid can be removed as well. The top riser tube has less length as compared to the one on the base. Take a note that the external threads of the tube are now concealed inside the top cover which gives a clean and good look to the unit. 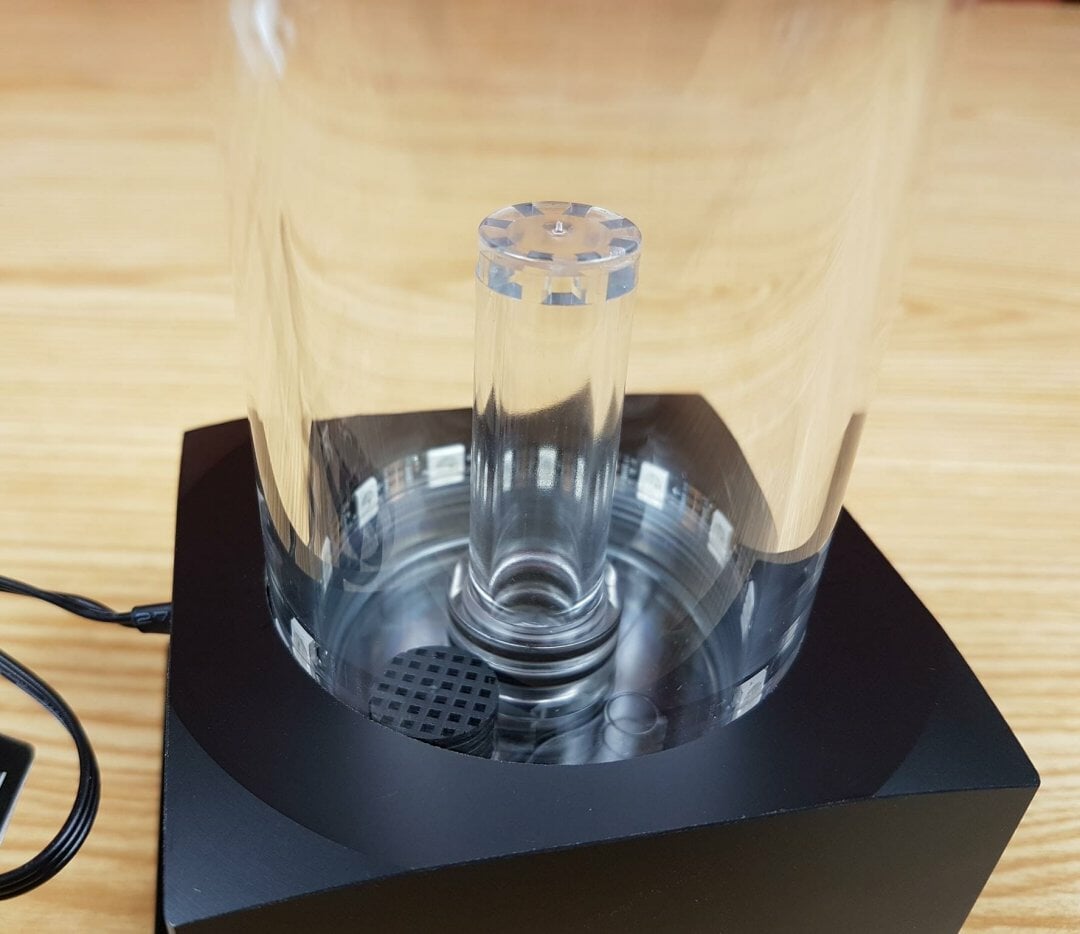 A key difference between the Core 200 and Eisbecher D5/Aurora is that the base of the pump top has a vented Plexi plate to stop bubbles. This is not implemented in the Core series reservoirs. This reservoir features a riser tube to give a light tower waterfall effect. This is done by using the cutouts on the top of the riser tube to give a sprinkle effect of the coolant coming out from the top nozzle. Keep in mind that at the pump’s full speed, the top inlet tube could make the coolant splash quickly.

Another key difference is that the tube now sits inside the pump socket case which would mean it is no longer protruded out of the base as is on the Eisbecher D5. This is to the fact that the tube has external threads. We have a filter port located on the left side of the tube. Make sure it aligns on the left side. We can also spot a strip of digital RGB LEDs integrated at the base which has 12 LEDs. 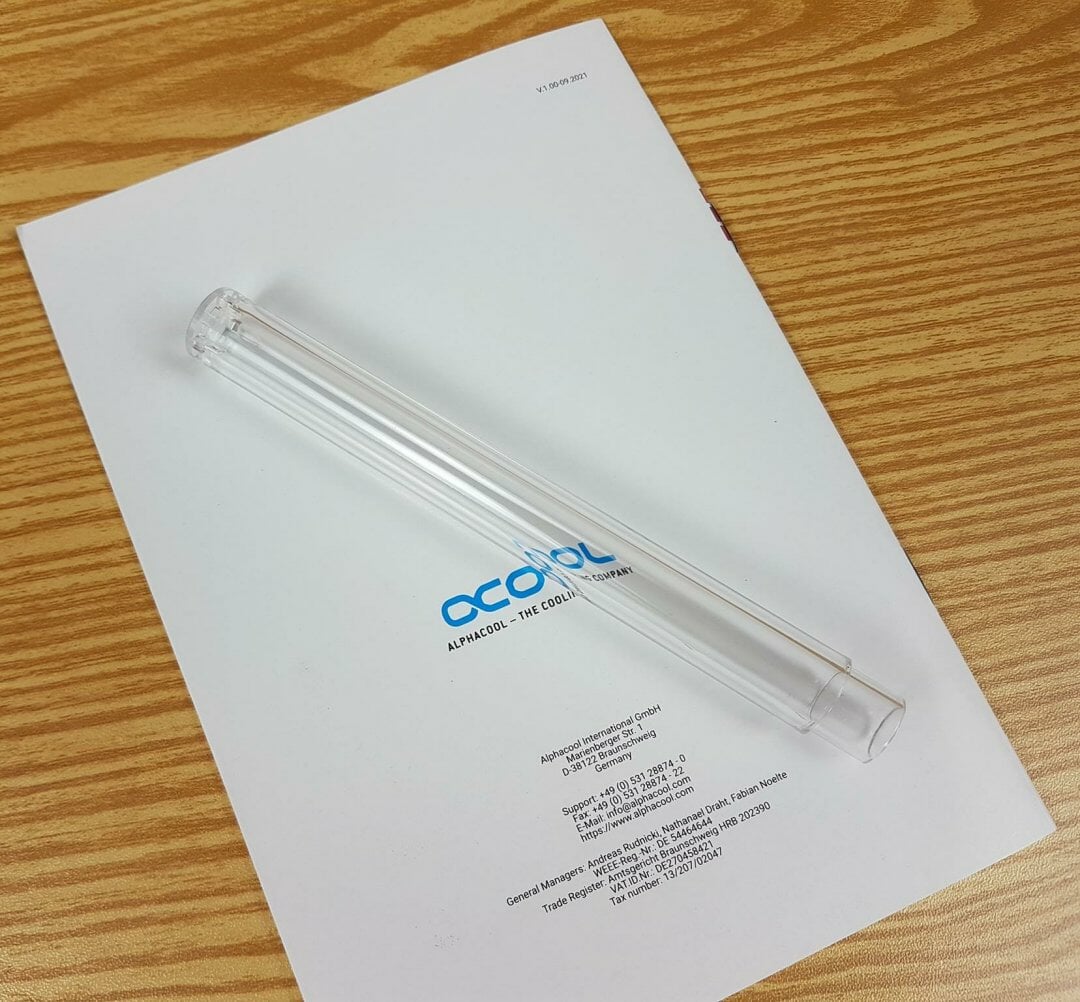 Alphacool has provided a 140mm riser tube which will only come with Core 200 series units. To install this riser tube, one has to open the reservoir from the top or at the base and replace the existing riser tube with the 140mm one. 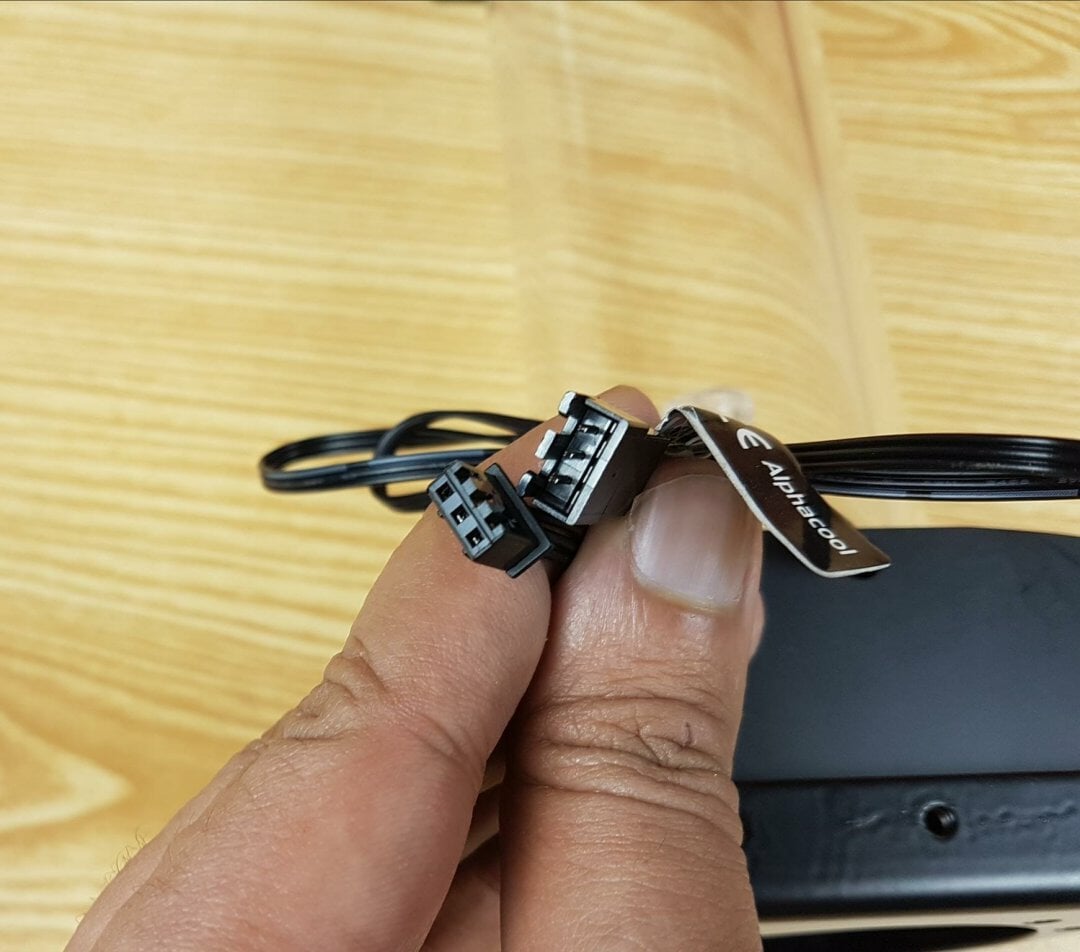 Alphacool has provided 3-pin connector and socket connectors for the lighting. These are proprietary connectors and you would need an adapter cable to connect with the motherboard or use Alphacool digital RGB controller, sold separately. 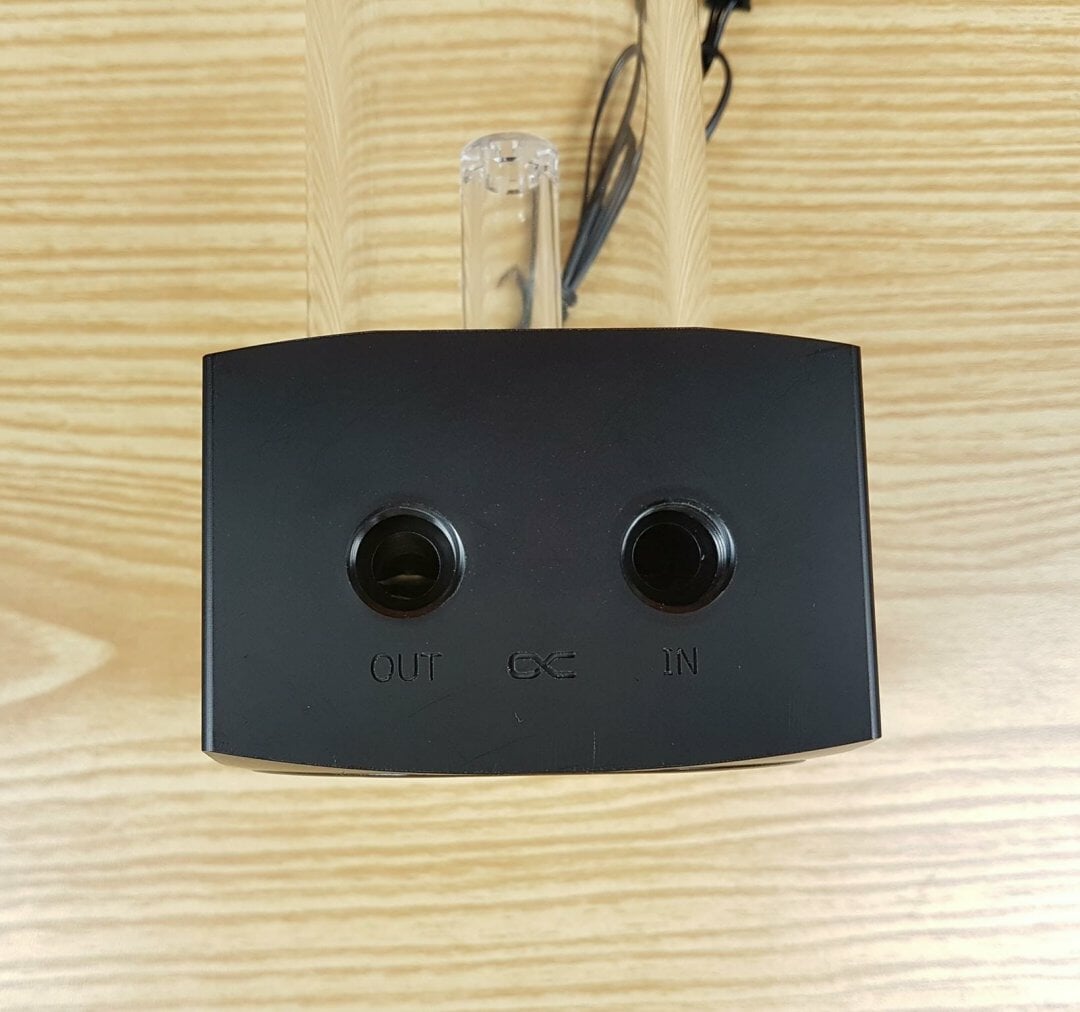 The base of the reservoir has dedicated IN and OUT ports which are also G1/4” threaded. The user should pay attention during the loop configuration to use the proper port for its dedicated function. There is an Alphacool branding in between these ports. 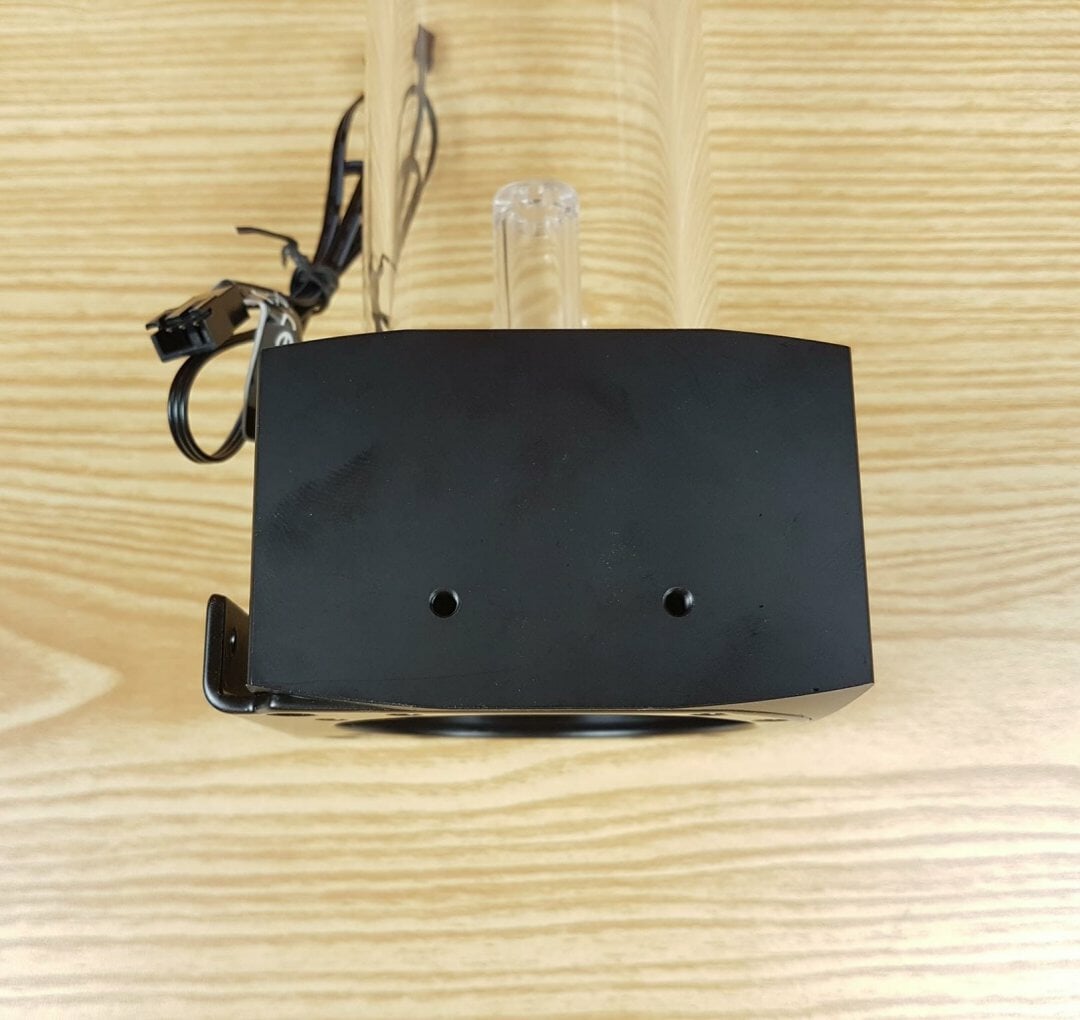 There are 2x mounting on this side and its opposite side. This is where the mounting brackets are to be installed. 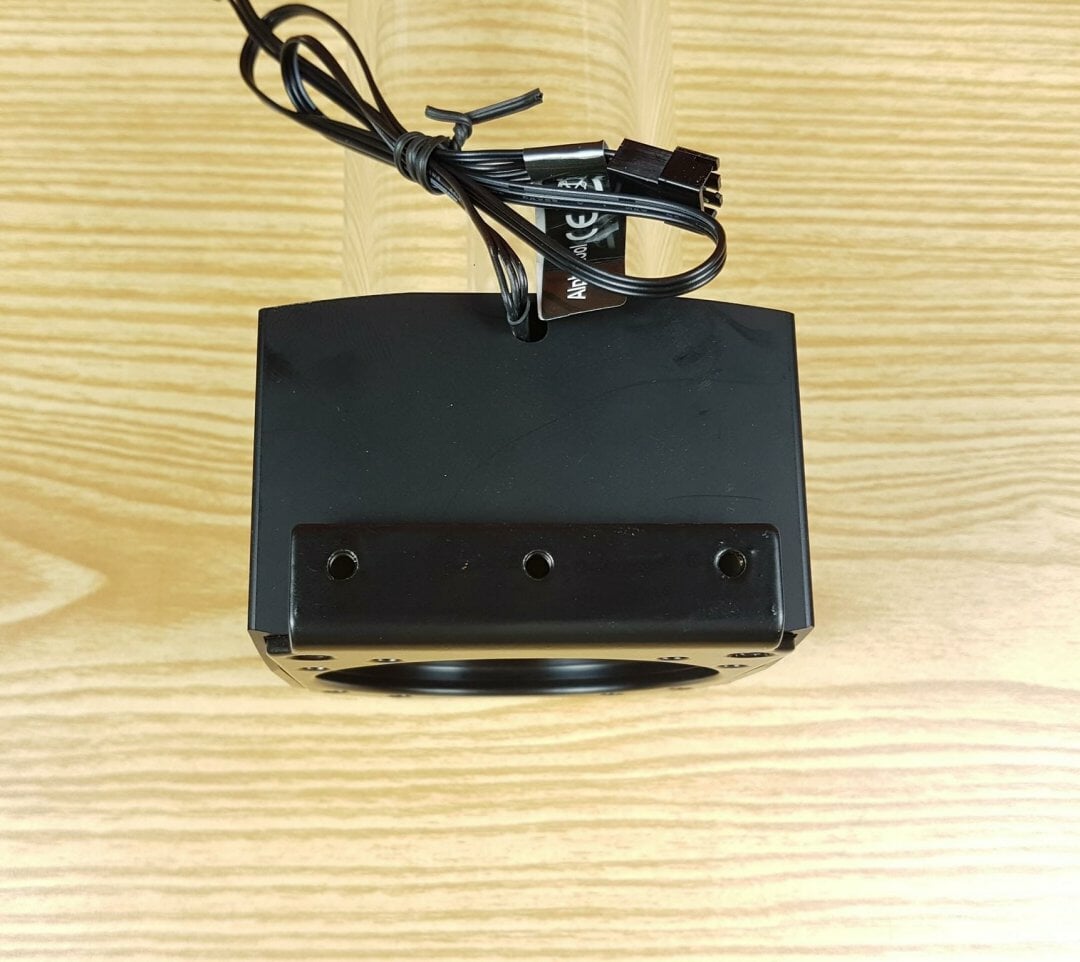 We have mentioned that Alphacool has implemented a support bracket at the base of the pump socket or pump top. Its outer side has 3x mounting holes which can be used to install the provided 120/140mm support bracket. 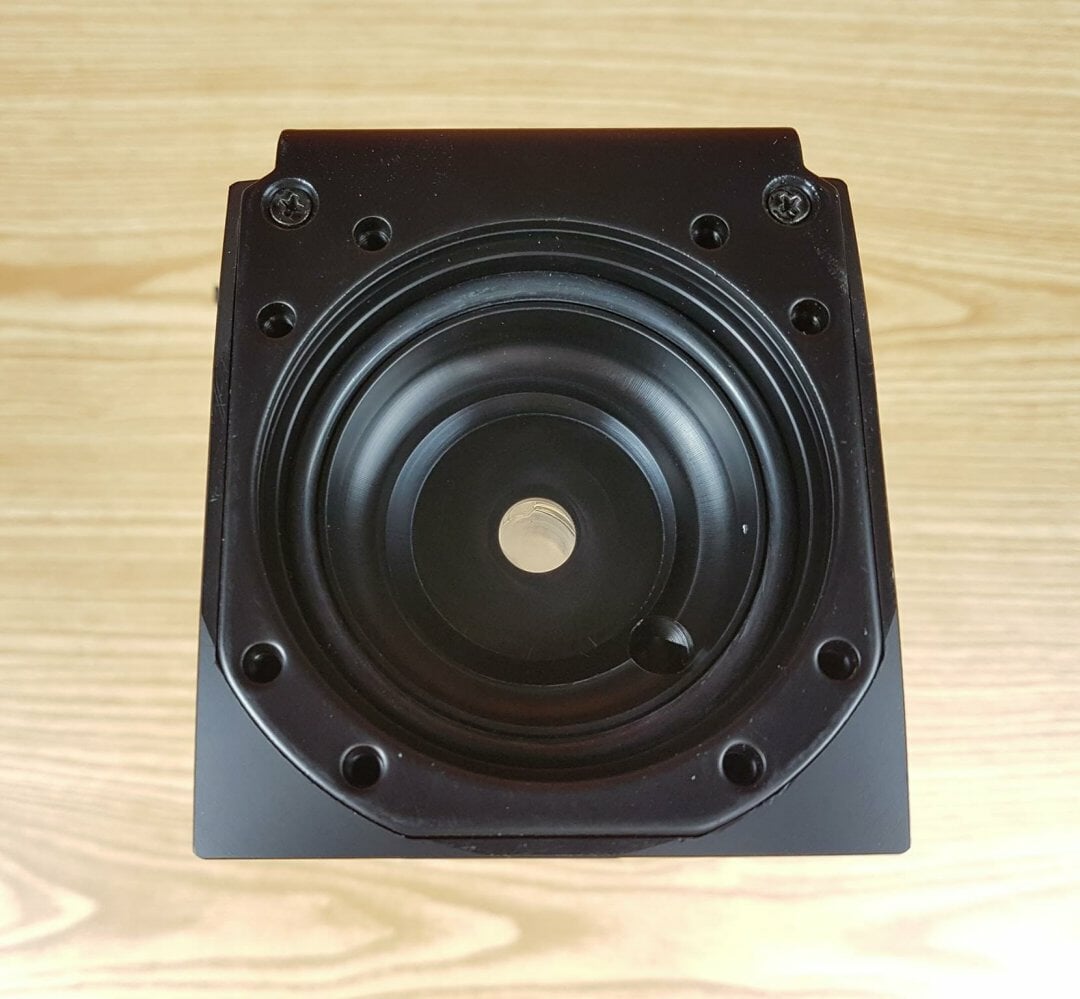 We have mentioned above that Core series reservoirs don’t have integrated pumps. One would need to buy a pump separately for these units. The above picture is showing the underside of the pump top. One key difference is the metallic support bracket which is pre-installed at the base. We have an almost identical layout as is on the Eisbecher D5. The other hole on the boundary wall is the outlet port. A thick O-Ring is visible on the inner edges. 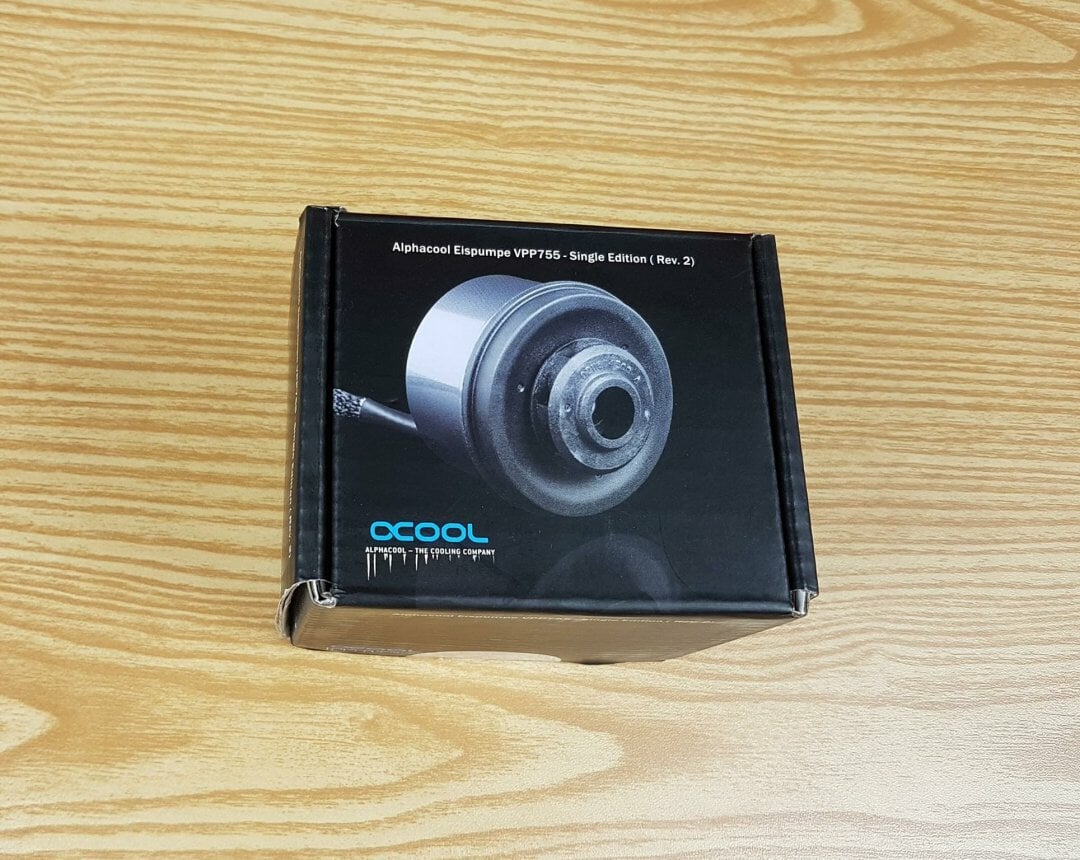 Alphacool has sent us a 1x VPP755 Rev 2 pump so that we can test the reservoir. The Eisbecher D5 series units come with version 3 of these pumps. The above picture shows the top view of the pump itself. This is a 2nd revision pump from the Alphacool named VPP755. 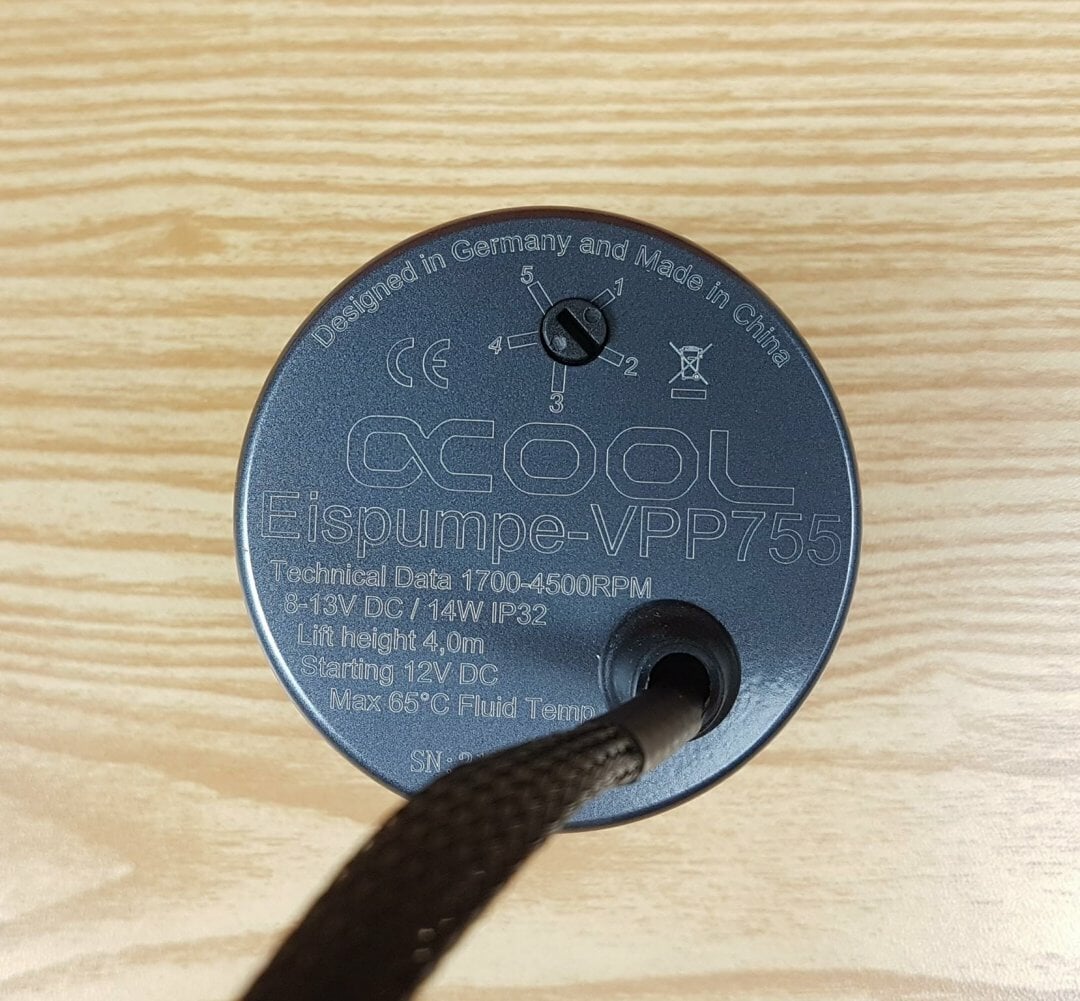 There is a manual speed adjuster with pre-defined 5 levels or stages of speeds numbered from 1 to 5. By default, it is on the number 5 which is the highest speed of the pump. Here is the related speed range against each stage: 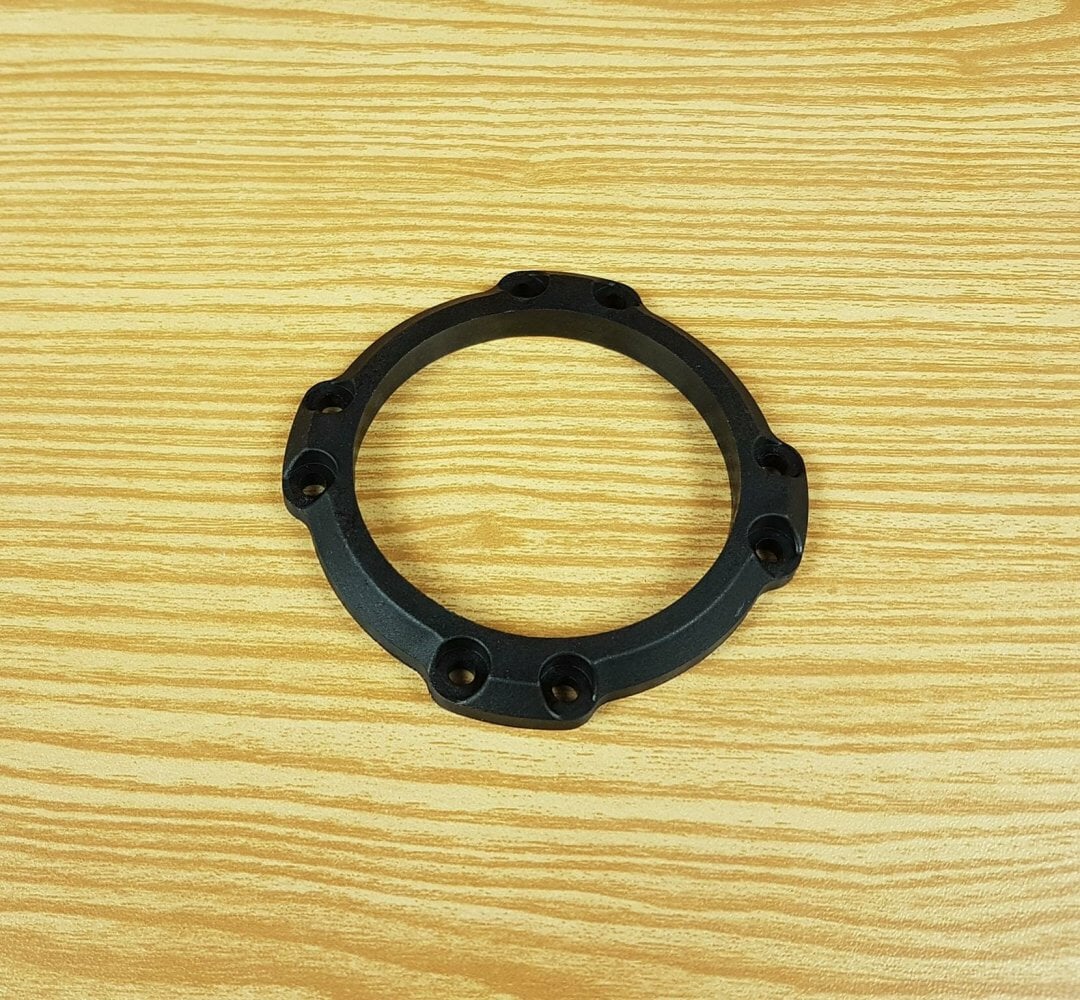 Alphacool has provided a pump mounting bracket (pump retaining ring) with the accessories. The pump is passed through this bracket and the assembly is placed on the pump socket of the Core 200 reservoir. The above picture shows the Alphacool VPP755 pump installed on the reservoir. The user is required to use the 8x M4x12 screws provided in the accessories for this installation. Please make sure that the pump fits in completely to ensure a tight seal. 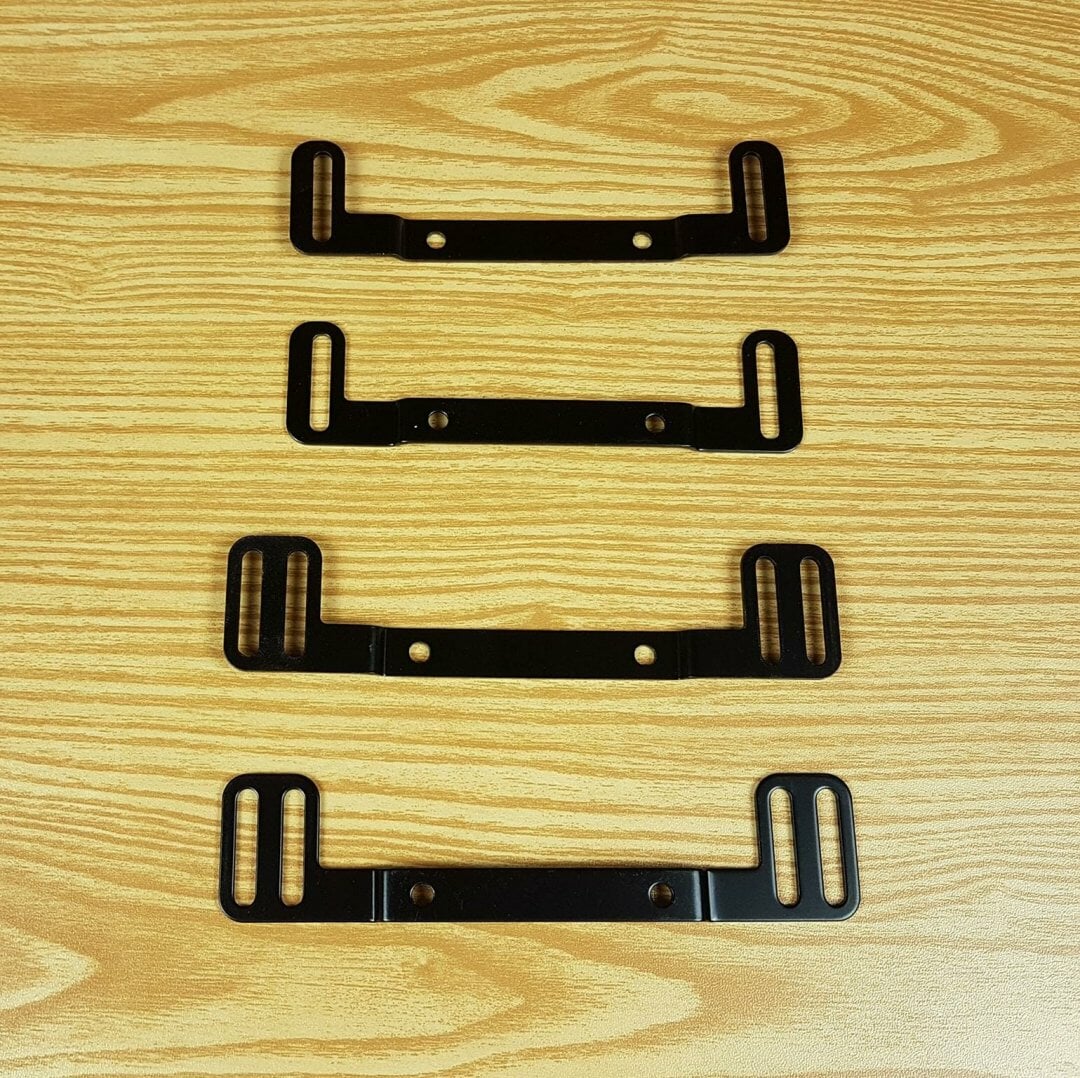 We are no longer seeing the ring-mounted brackets with the Core 200 series reservoir. Instead, Alphacool has provided a pair of two brackets. One is for the 120mm mounting and the other is for the 140mm mounting. 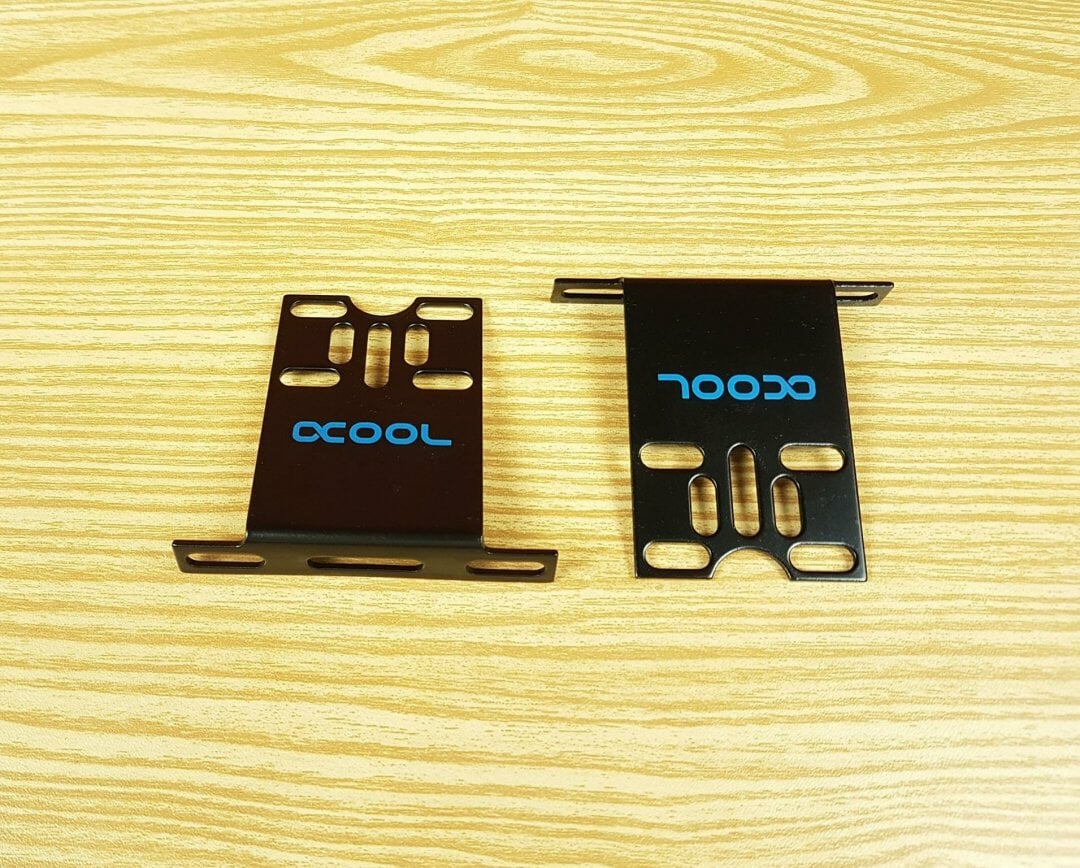 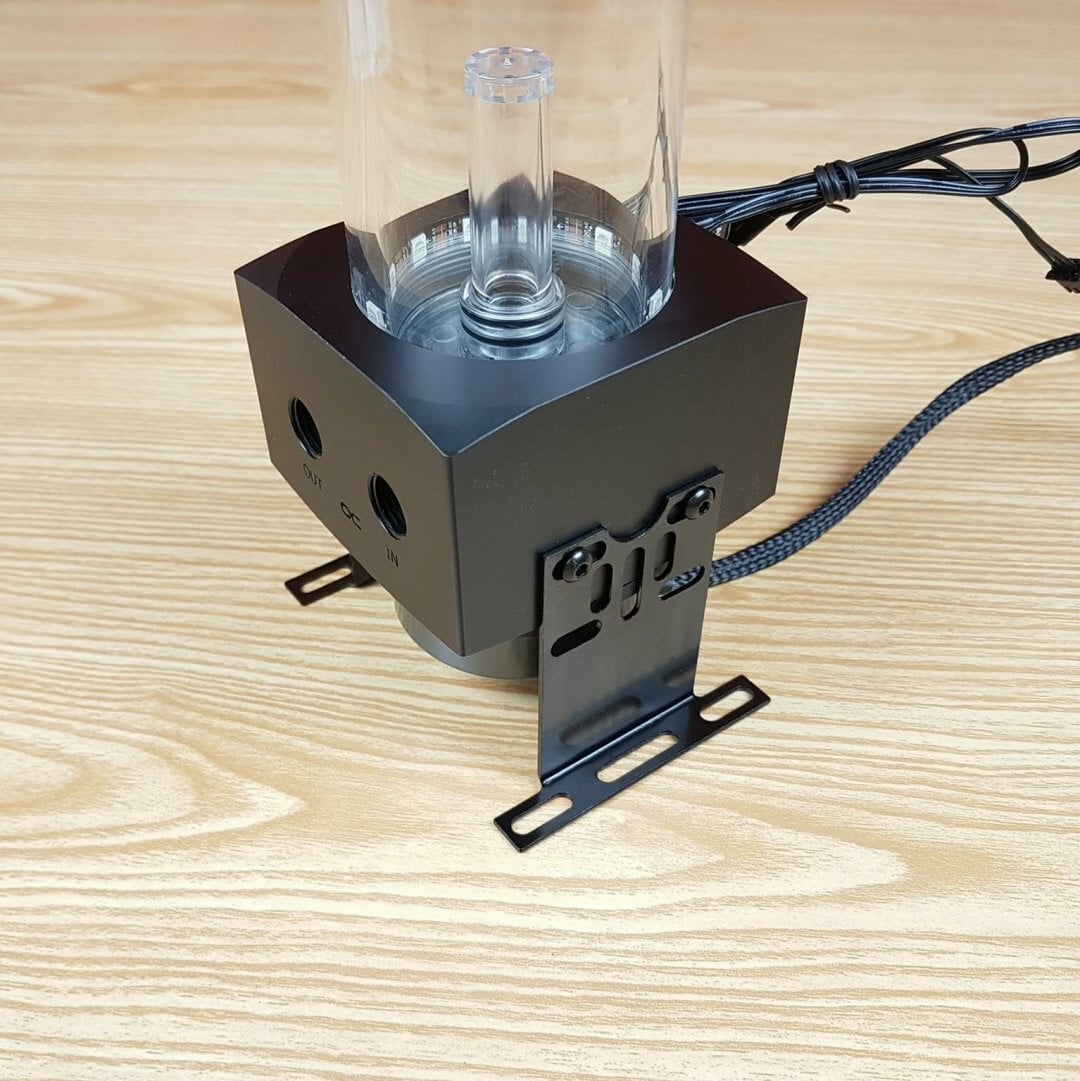 The above picture shows the stand brackets installed on the unit. I have inverted them which is my requirement. As per Alphacool’s recommendation, the base of the stand bracket faces inward. 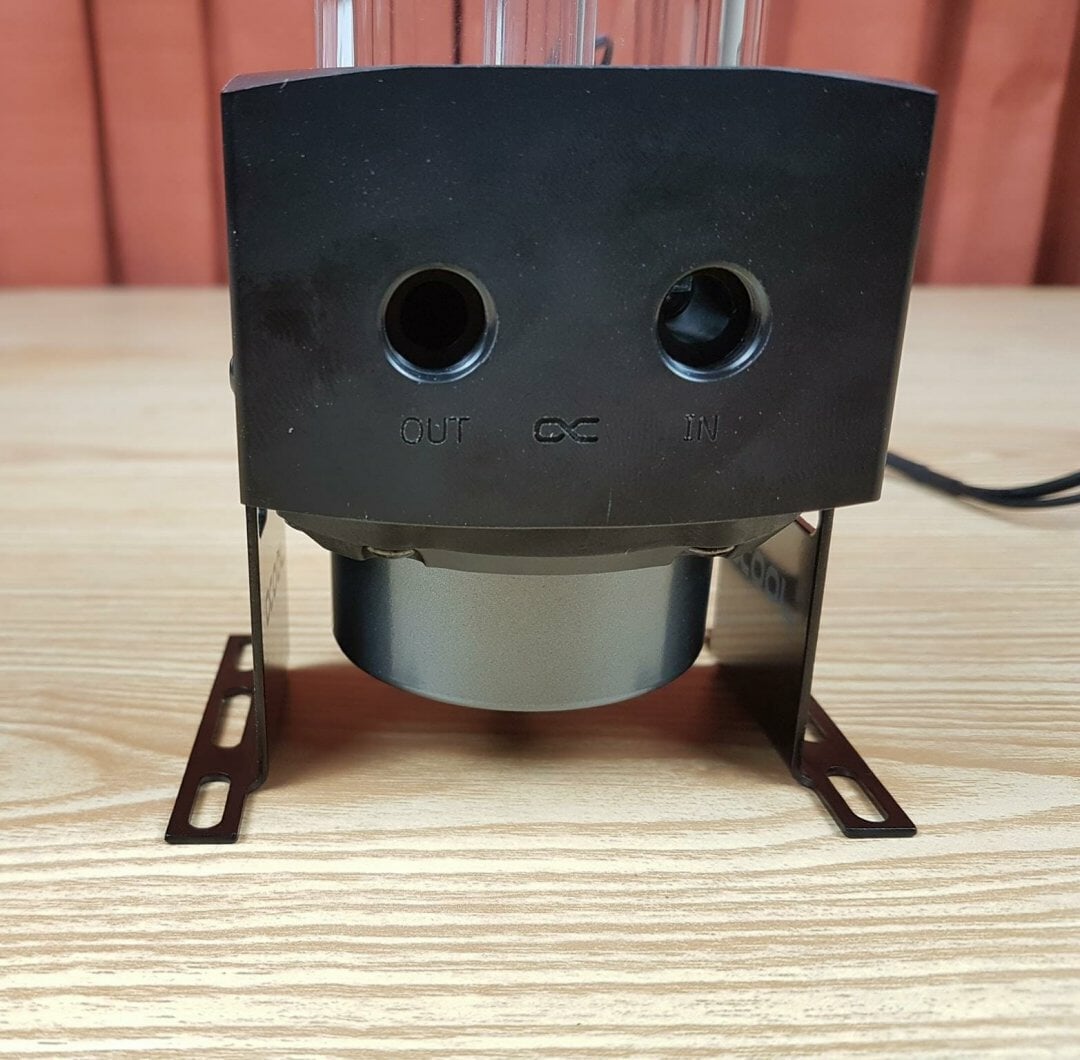 Here we can see that the stand brackets have given a good enough lift from the ground to the reservoir. 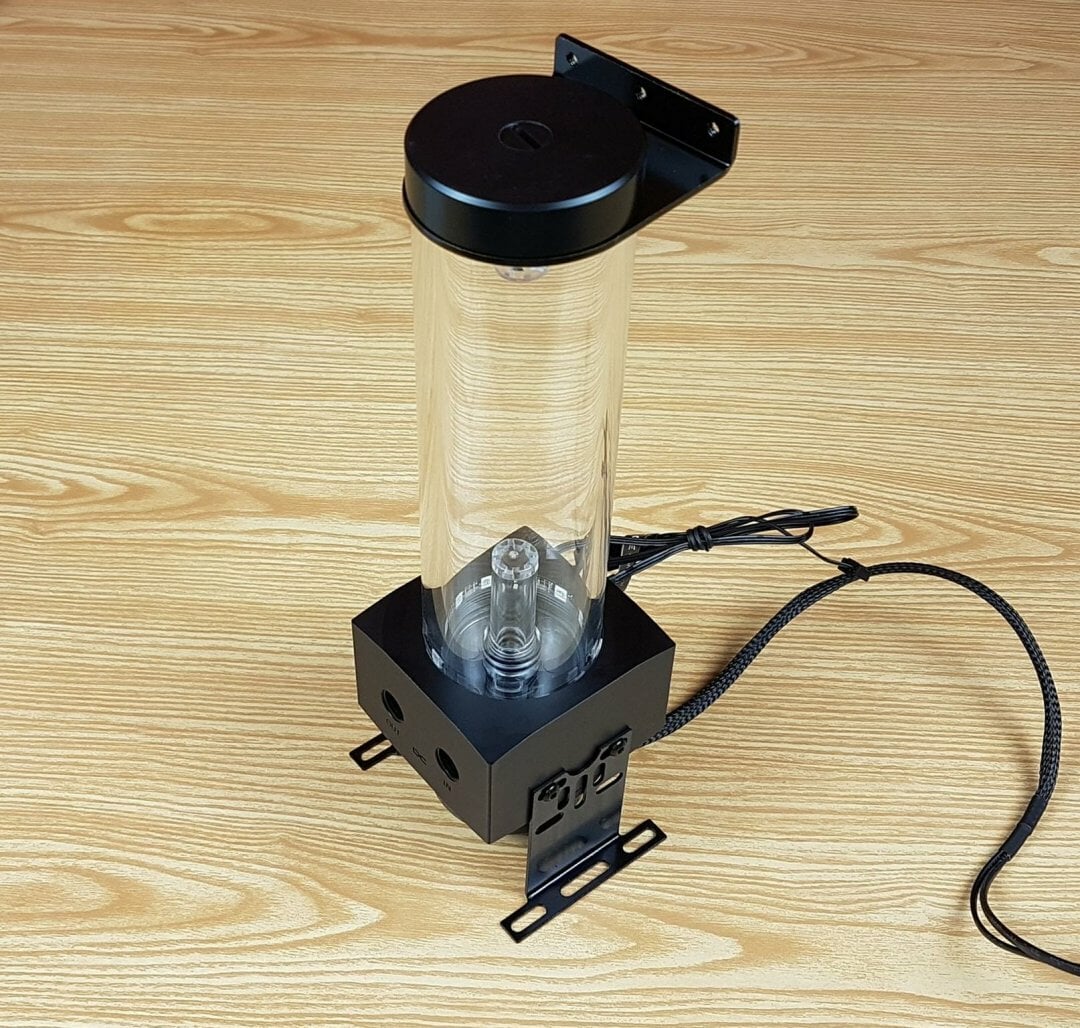 Here, we are showing the complete unit with the stand brackets and pump installed.

Here are a few pictures of the unit.

The Core 200 AURORA packs digital RGB lighting. We have tested them using the MSI Mystic Sync App on the MSI MAG Z490 TOMAHAWK motherboard and found them responding to the change in the light mode or color, flawless. Here are a few pictures:

We have used the Core 200 AURORA in a test loop for the testing of the Alphacool Eisblock GPX-N 3080/3090 Active Backplate. The unit was working flawlessly and the pump was not loud even at full speed.

Core 100/200 AURORA D5/VPP is the name of the new reservoirs being launched by Alphacool. There are more new products coming along as well. The Core series of the reservoirs have tube made of Acrylic and the pump top with the top cover made of Acetal. This gives a neat and clean outlook to the unit.  The main outlook resembles the Eisbecher D5 series reservoirs but there are key differences along with the design element on the new Core series reservoirs.

The Core series has the Acrylic tube as we have seen on the Eisbecher D5. The tube is 60mm in diameter and has a capacity of 400ml of coolant. The dimension of the unit without brackets without the stand is 251×76.5×76.5mm. The dimension with the stand but without the bracket is 290×76.5×76.5mm. The unit is tested for 0.8 Bar pressure. The maximum operating temperature is 60°C. The weight of the unit is 651gm.

We have a total of 3x G1/4” threaded internal ports. There is a single port are on the top of the reservoir body whereas 2x ports are on the pump socket housing. These 2x ports have a dedicated Inlet and Outlet function and they are clearly labeled for that. The top port on the top can be used for refilling.  This port faces a riser tube inside the Acrylic tube for the light tower waterfall effect. We have another riser tube at the base of the unit. Optionally, the user can install the 140mm riser tube in the main tube. This option is for Core 200 only.

Some key notes and differences compared to Eisbecher D5 are:

Alphacool sent us the Alphacool Eispumpe VPP755 V2 so that we can test the unit. It is a PWM pump that can also be powered using the Molex connector providing a hybrid control. The pump also has a manual adjuster which is a button that can set the speed of the pump up to 5 levels with 5 being the maximum speed level. The pump is rated for up to 4 m pressure level at 12V.

The digital RGB LEDs are powered using proprietary connectors which makes sense in the Alphacool Ecosystem though I would love to see the standard 3-pin 5V connectors. There is an adapter cable provided in the box which allows the users to connect with the motherboard directly. Else, the user is required to buy the Alphacool’s RGB controller separately.

Alphacool has provided the necessary mounting hardware for the convenient installation of the unit. They have also provided stand brackets so that the unit can be placed at the base of the PC case. There are 120mm and 140mm mount fan brackets as well.

We have a good experience with the unit. The digital RGB lighting was responding to the change in the dynamic modes and change in colors using the MSI Mystic Sync app on the MSI MAG Z490 TOMAHAWK motherboard. The pump was silent even at full rated speed and the unit allowed us to complete the testing of the Alphacool Eisblock GPX-N AURORA Active Backplate 3080/3090.

The MSRP of the Alphacool Core AURORA 200 D5/VPP is € 79.99. The unit has a solid build quality with key features and refinements as mentioned above and serves the purpose that well. It comes recommended by us.

We are thankful to Alphacool for giving us the opportunity to review the Core 200 AURORA D5/VPP. 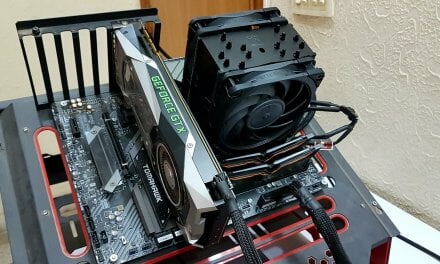 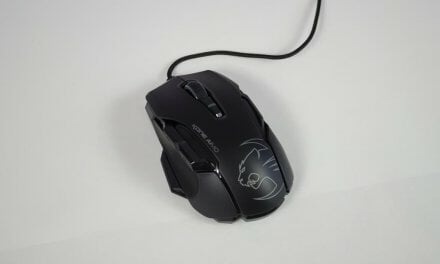 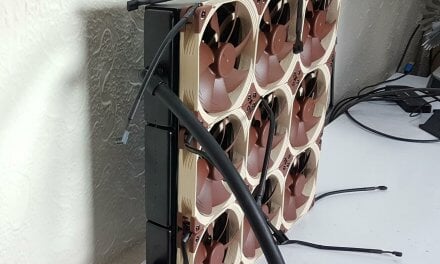 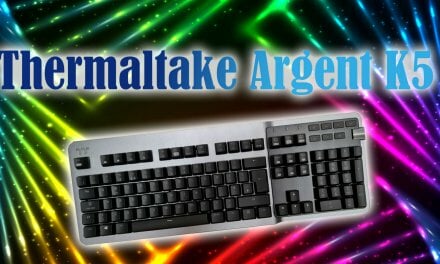