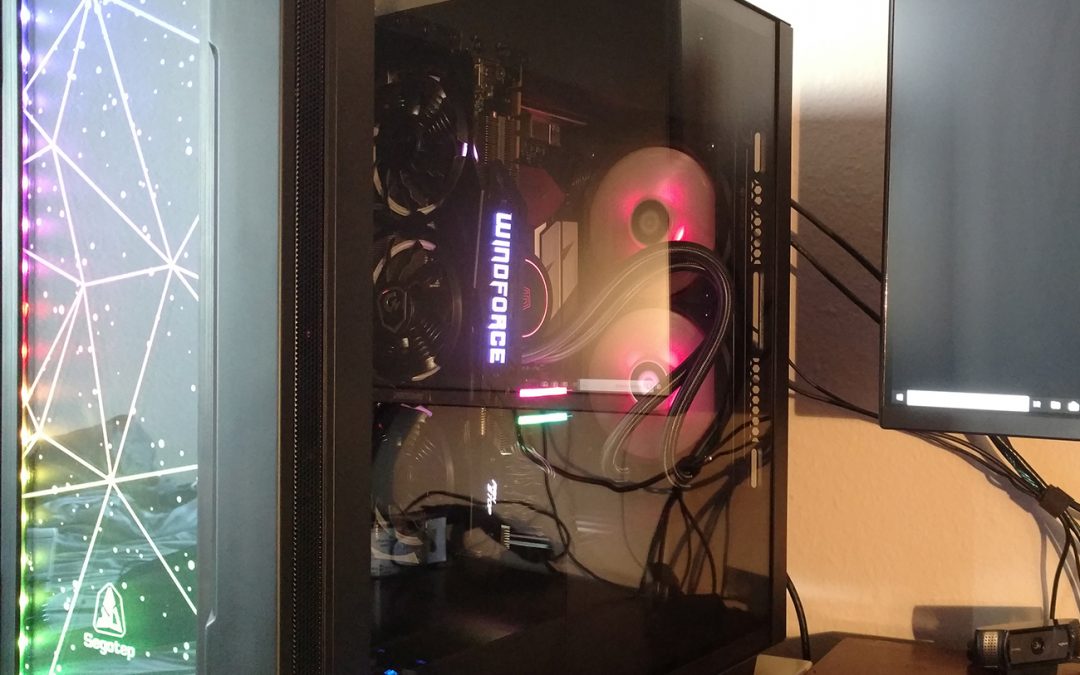 Today I am taking a look at a case turned upside down and around! The Segotep Phoenix a Mid-Tower ATX case with some interesting features. Segotep is a top brand of computer cases and power supplies in China, with a focus on DIY products. With nearly 15 years of experience, Segotep has built up a good R&D team and testing systems, to provide top quality. I do not know much about this company but they do make one interesting case here with the Phoenix.

Right away getting the Phoenix unboxed you can see things are a bit different than with your normal ATX Mid-Tower. Yes, it is designed to sit on the left of your desk and the IO is rotated from the rear to the top of the case. 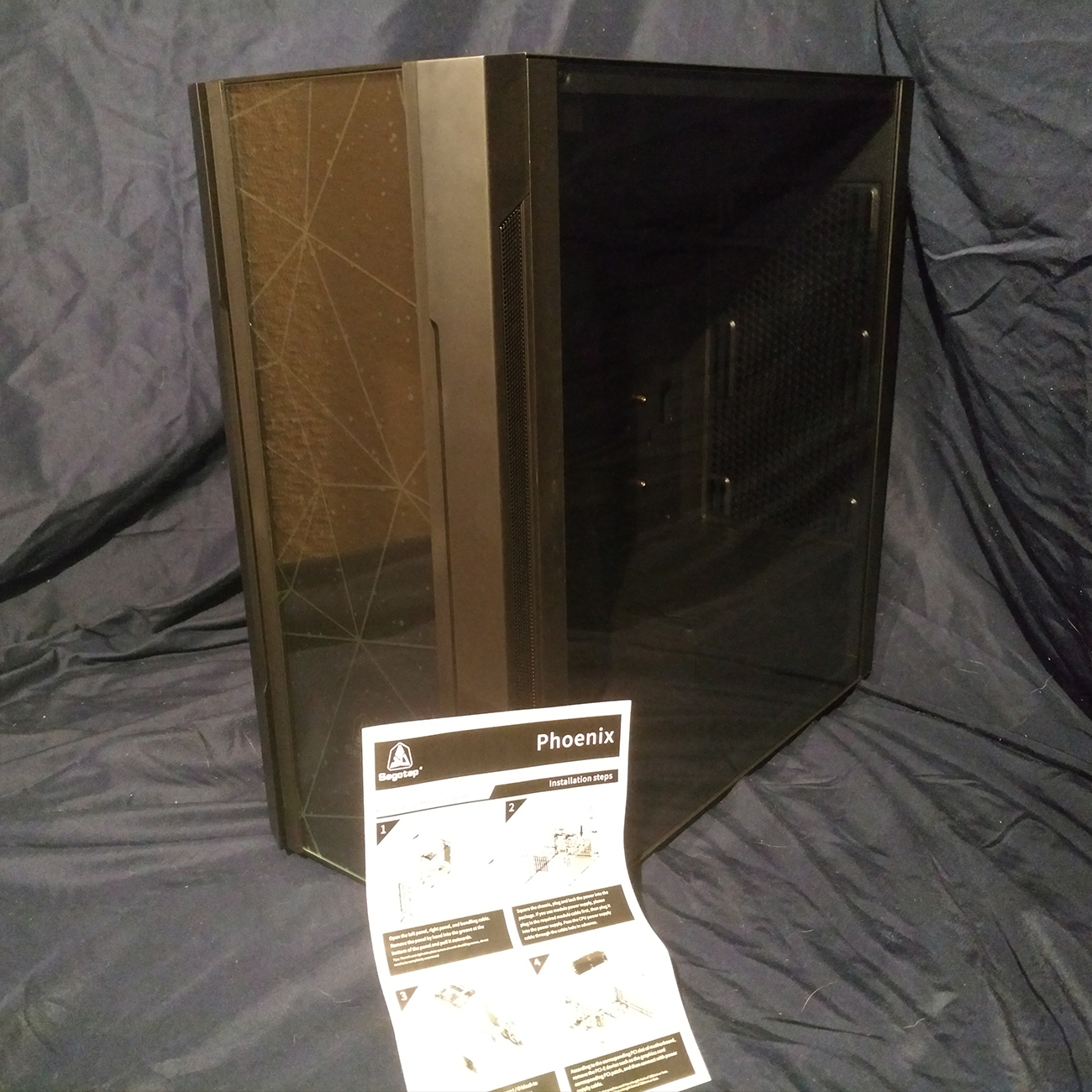 Here on the front is the RGB that is included with the case, that is controlled via a 5v 3pin header on your motherboard. (5v 3 Pin addressable LED headers and VDG headers ONLY). The RGB strip is located on the left of the front panel running down the side along the edge of the glass. This allows the effect of the full glass panel on the front taking light in the etched areas. 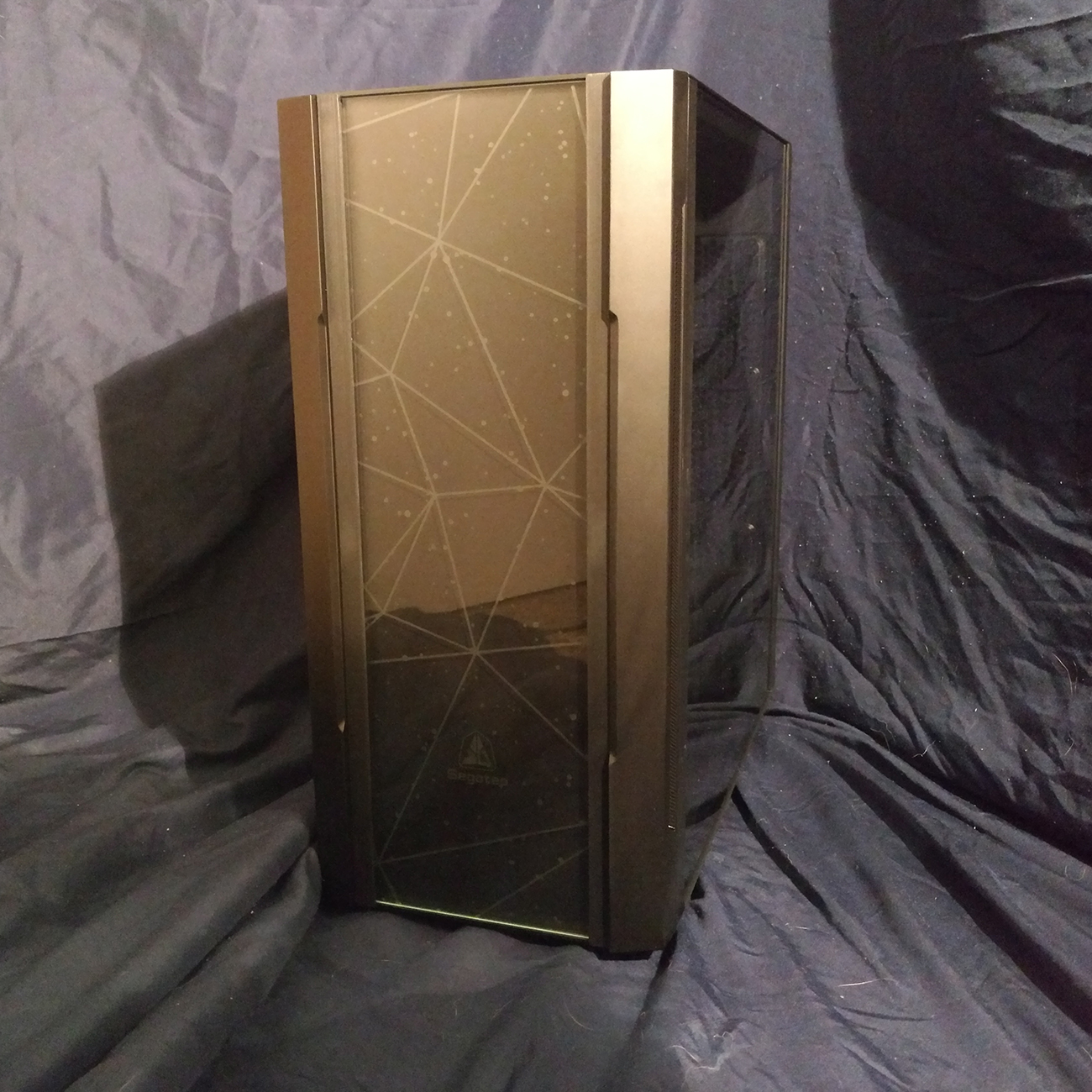 Popping the tempered glass panel off is as simple as loosening two thumb screws located in the rear and lifting the door away. This reveals a much clearer view of the layout of the Segotep Phoenix. As you can see there is plenty of cable routing options. 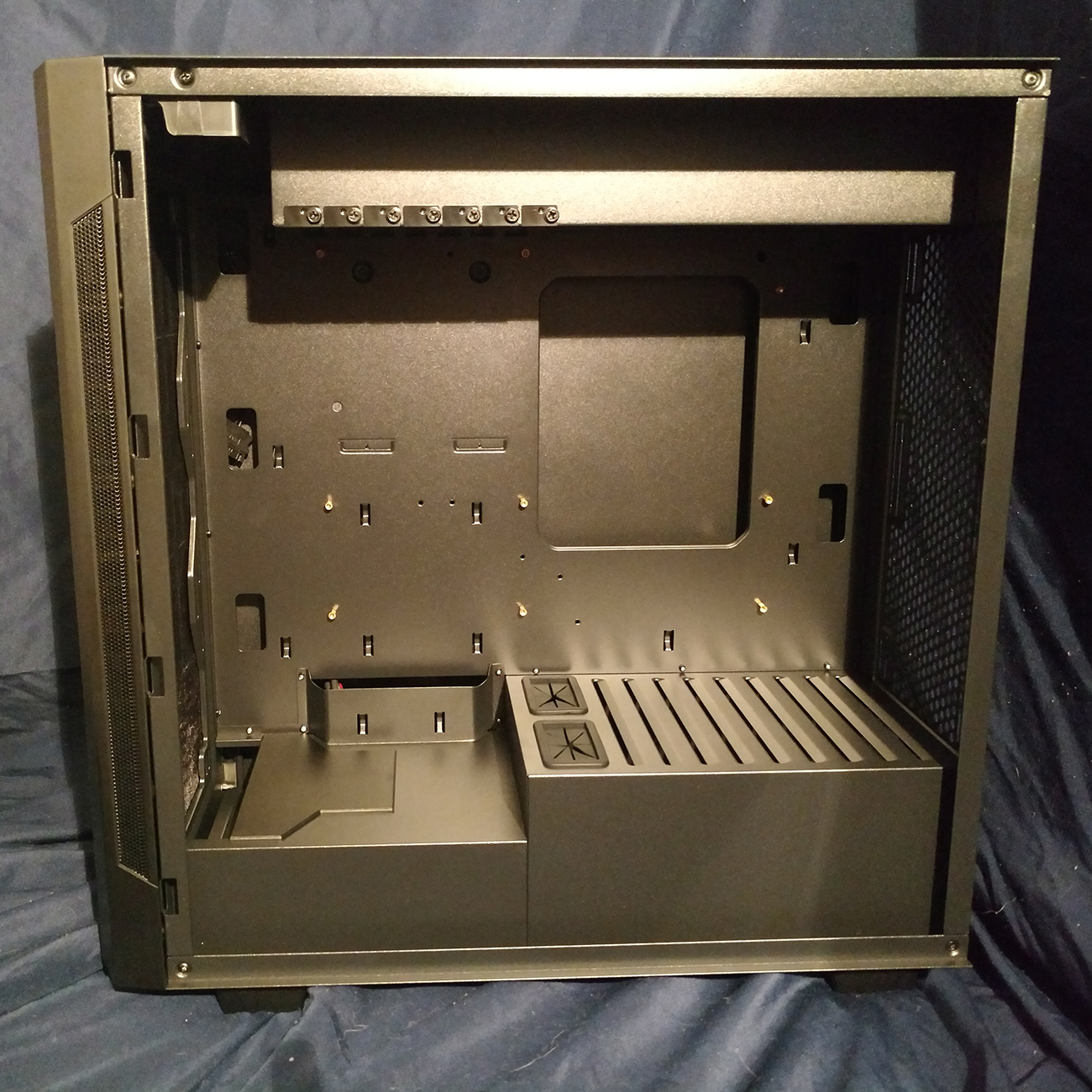 Here is a good view of the cable routing for the GPU power and SATA cables. Also, note the room for the bottom fan here there is no place for a 360mm radiator in this case for water cooling 240/280mm only. You can put up to 3x120mm or 2x140mm fans in the front there is just no room for both a radiator and fan in the lowermost fan port. 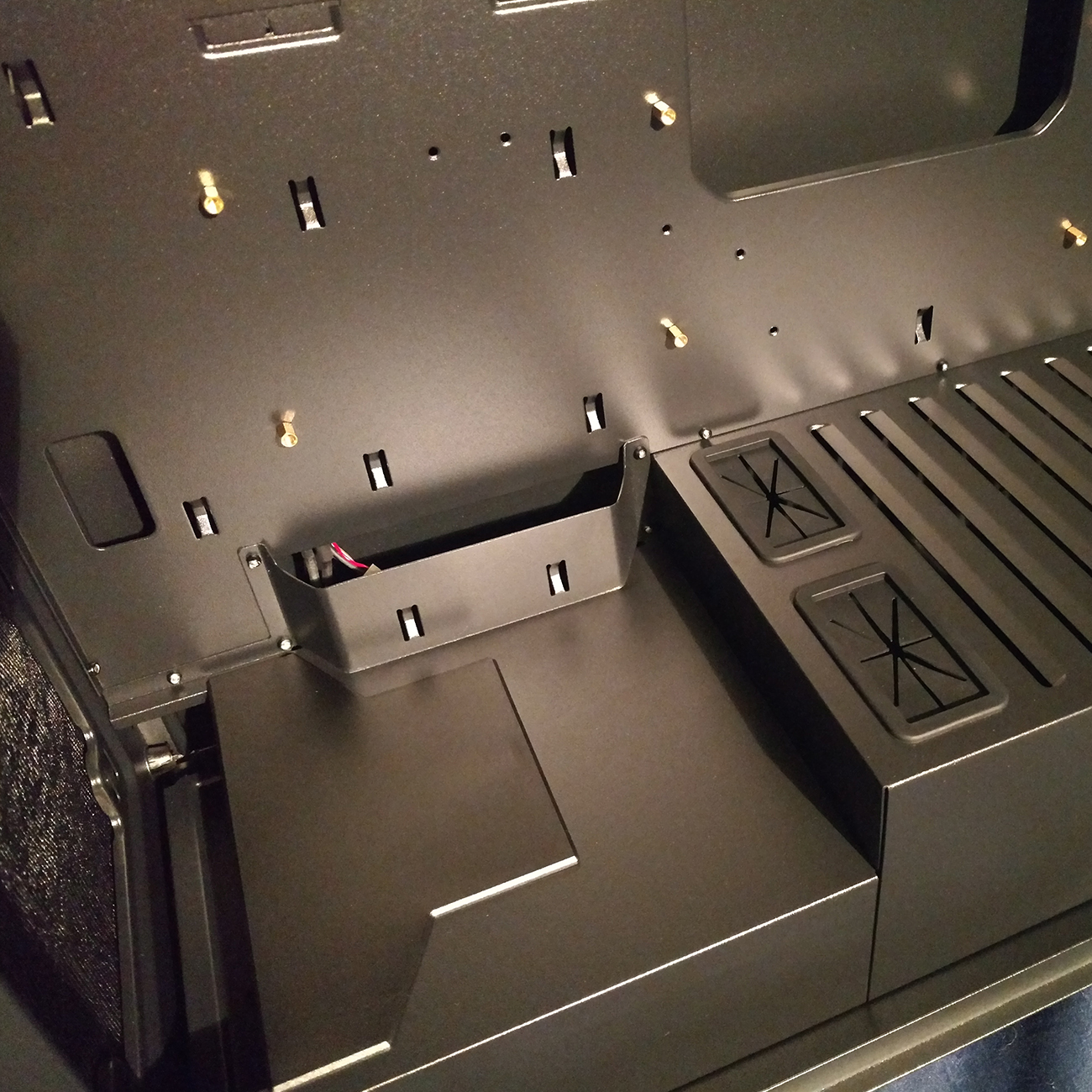 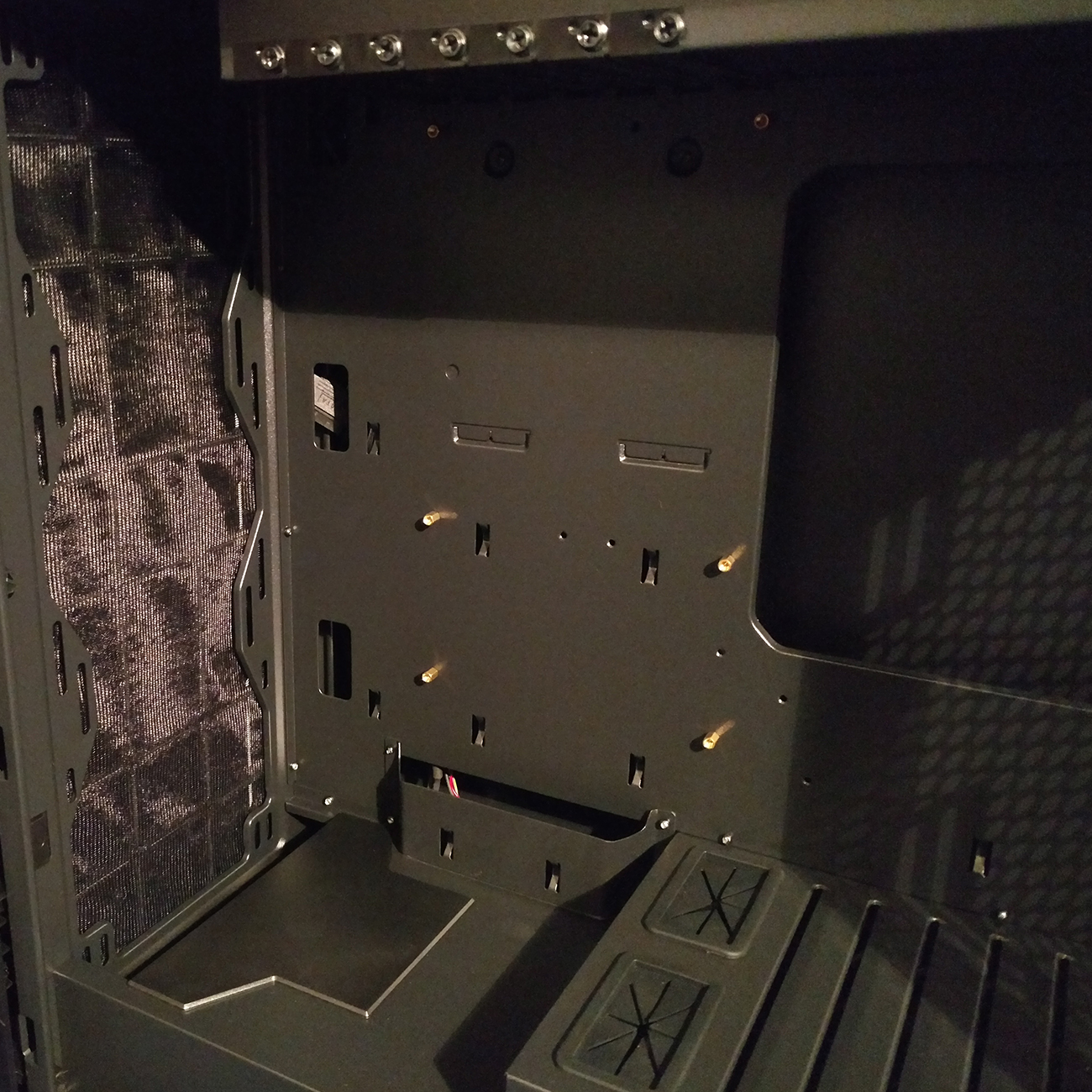 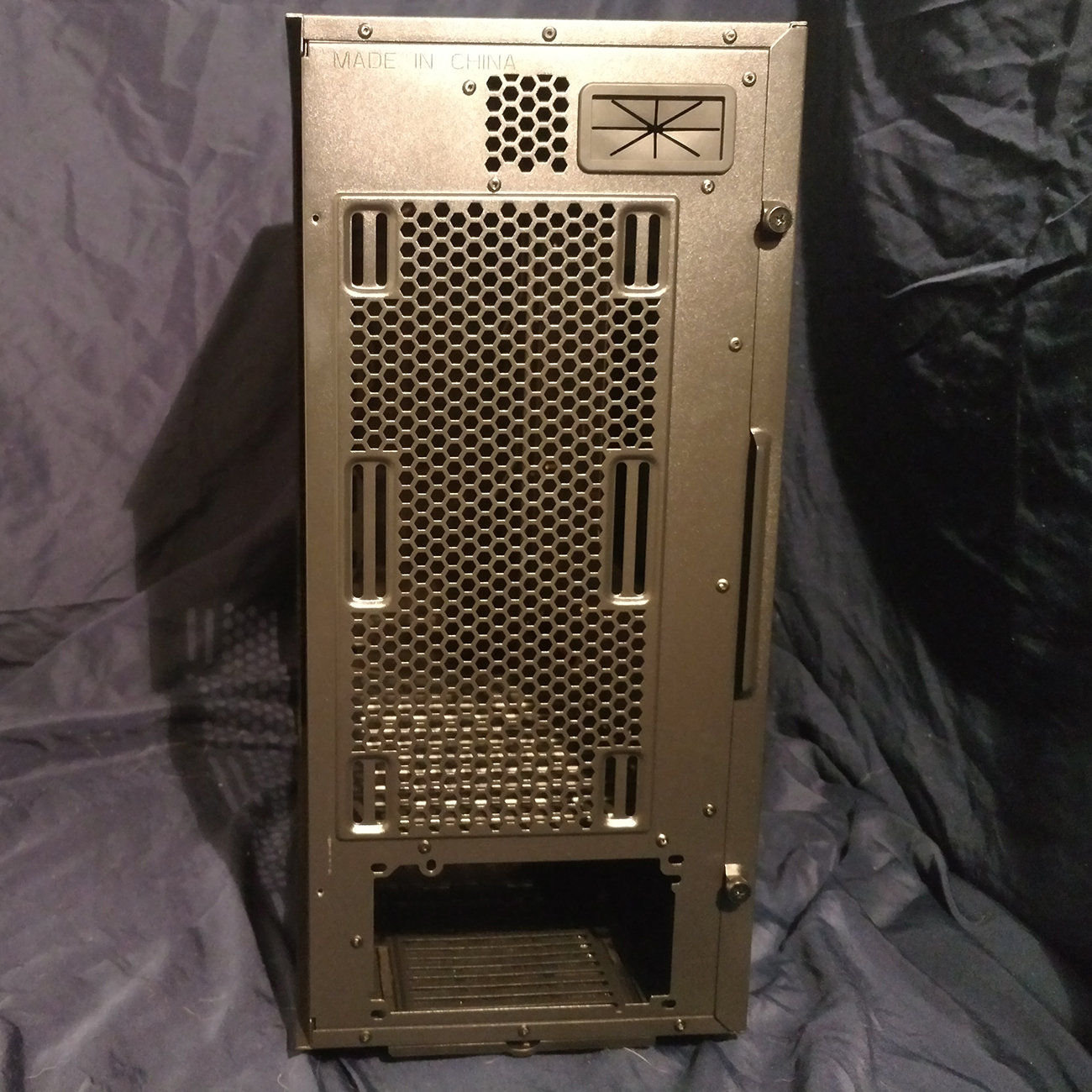 Here is your front panel I/O from left to right there is your Power button which will light up white and flash red when your system is powered. Next to that is the front panel RGB control if you do not have the strip plugged into a motherboard header, it is indicated by a little lightbulb. Pressing this will cycle through a few multi-color and solid color effects, and holding the button down for about 5 seconds shuts the front panel lights off completely. After that are the USB 3.0 (blue) and USB 2.0 (black) ports for plugging various USB peripherals like external hard drives and controllers into. Lastly, there are both a 3.5mm headphone and a 3.5mm microphone jack for easy front audio connection. 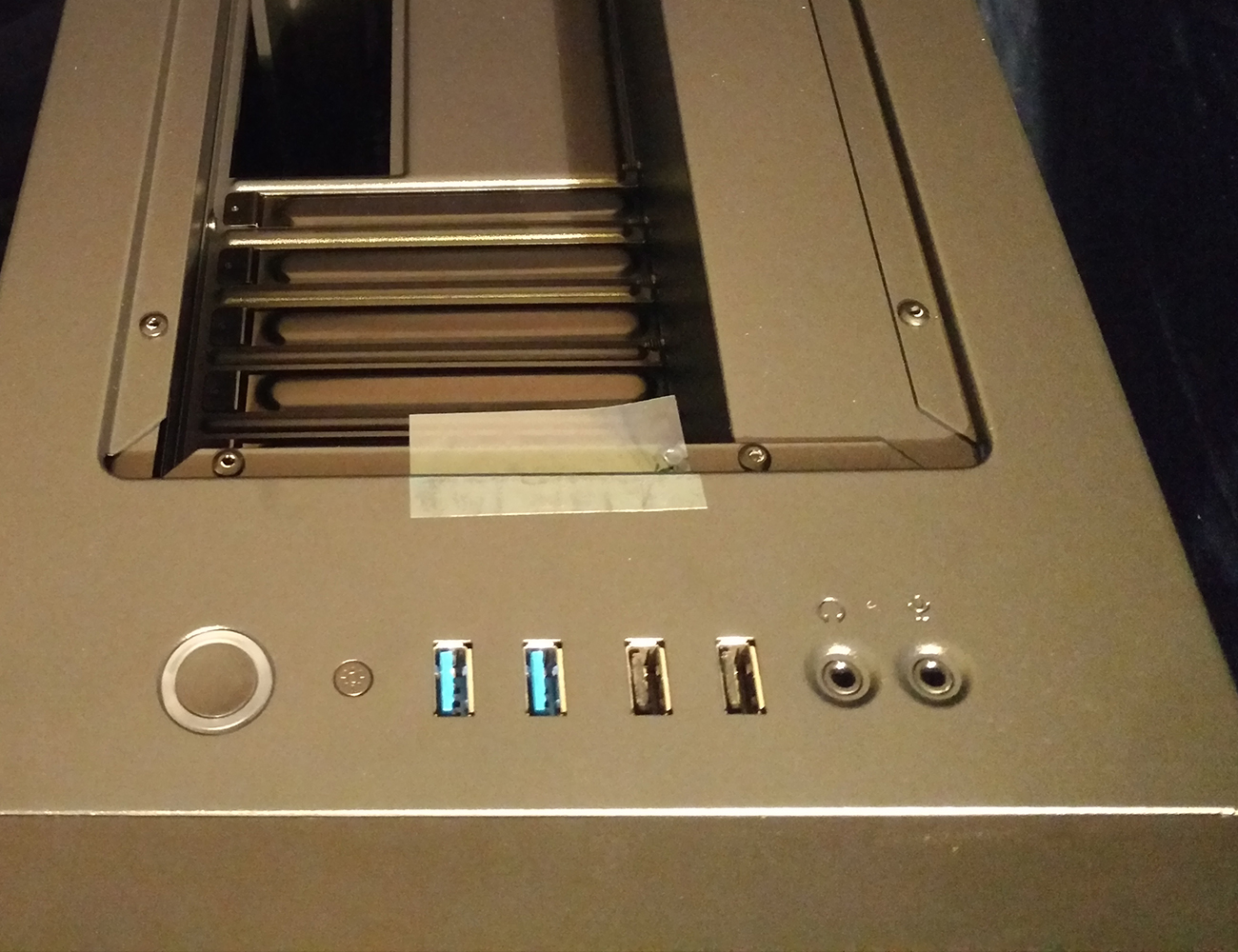 Be careful when pulling your front panel off, it is attached to the RGB strips. You can either just pull enough wire through to move the panel aside or unplug them to fully remove the front panel. 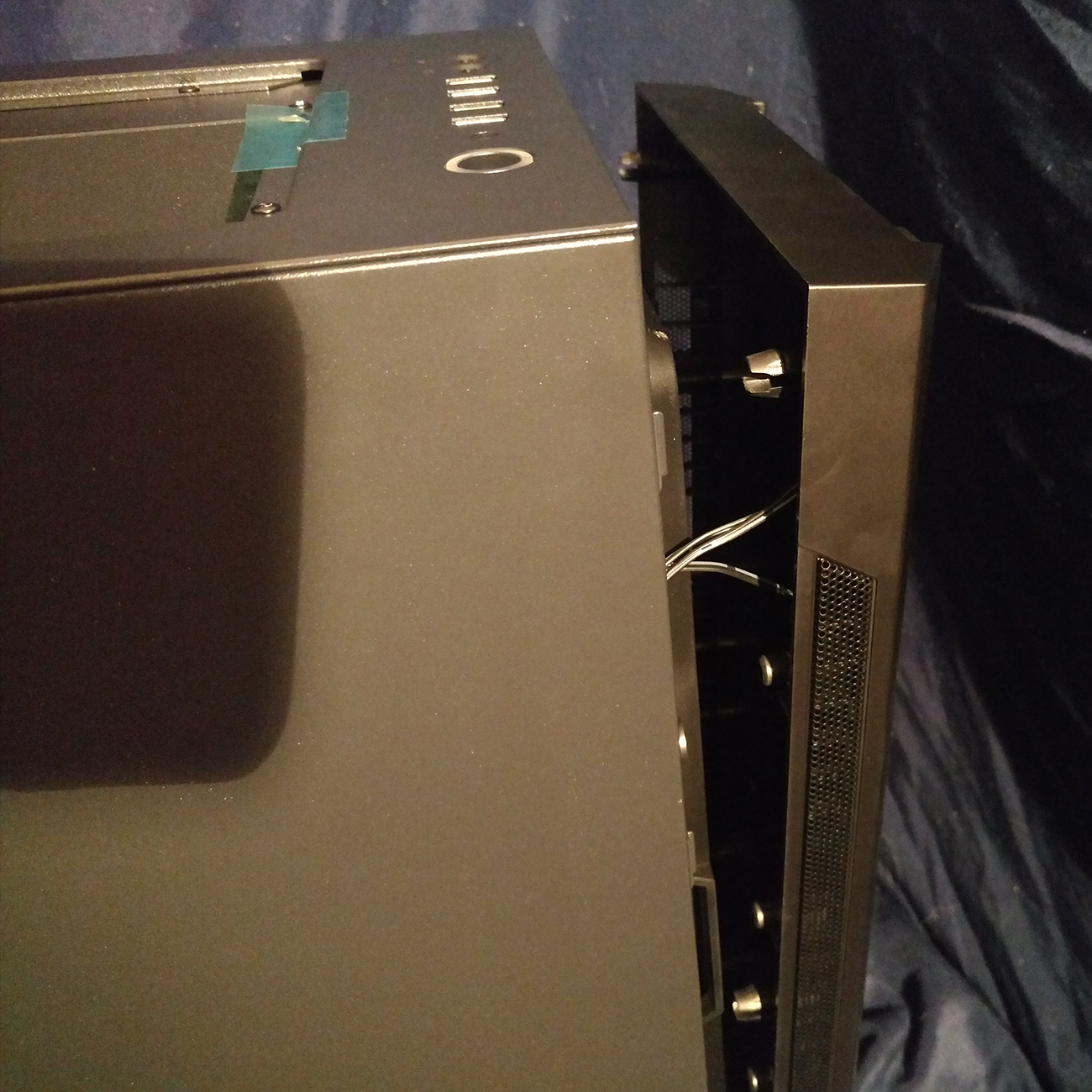 Here is the front panel pulled aside for a good view of the front intake and air filter included. The filter is held in by two tabs on the right side and two magnets on the left. 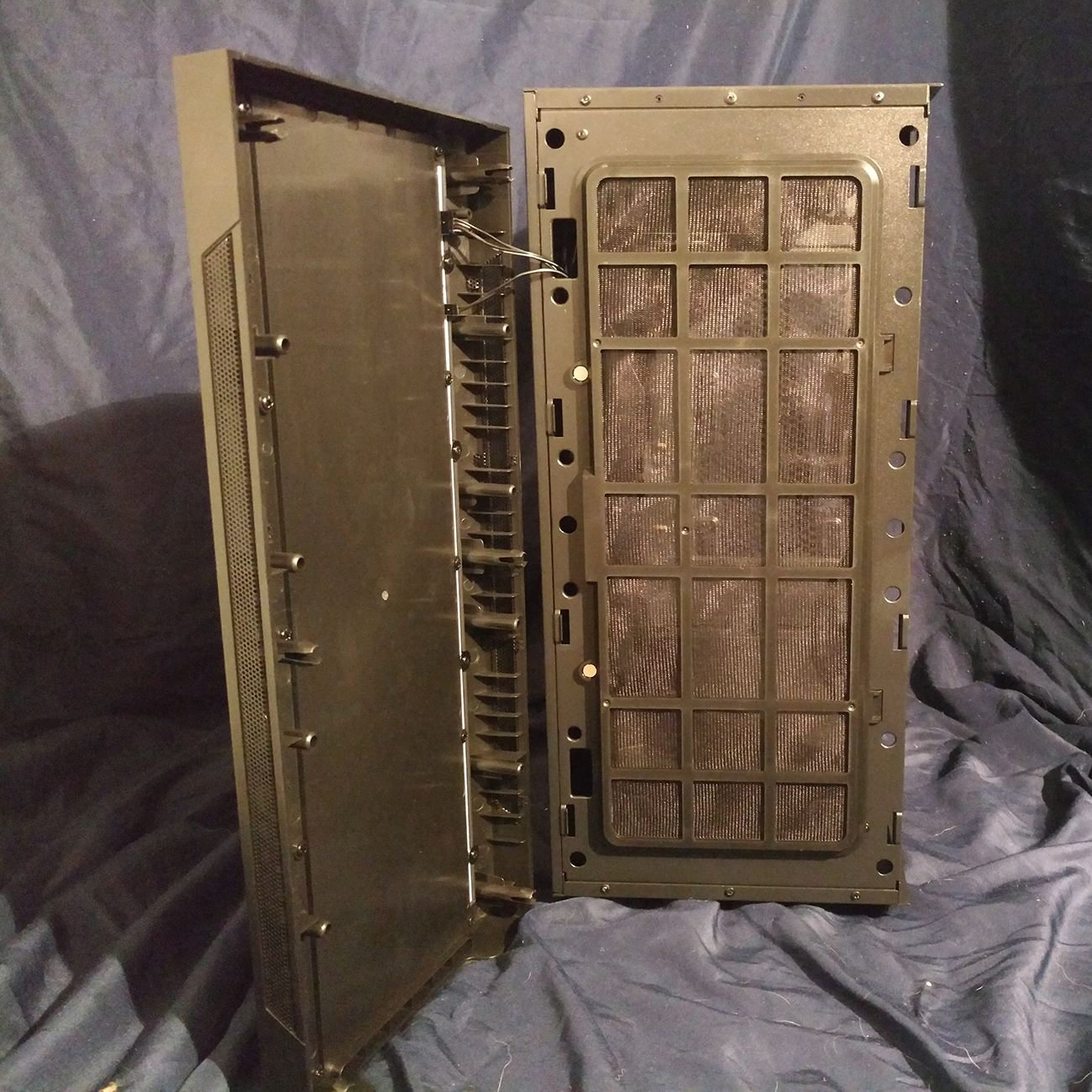 The filter can swing aside or just be removed completely for fan installation. 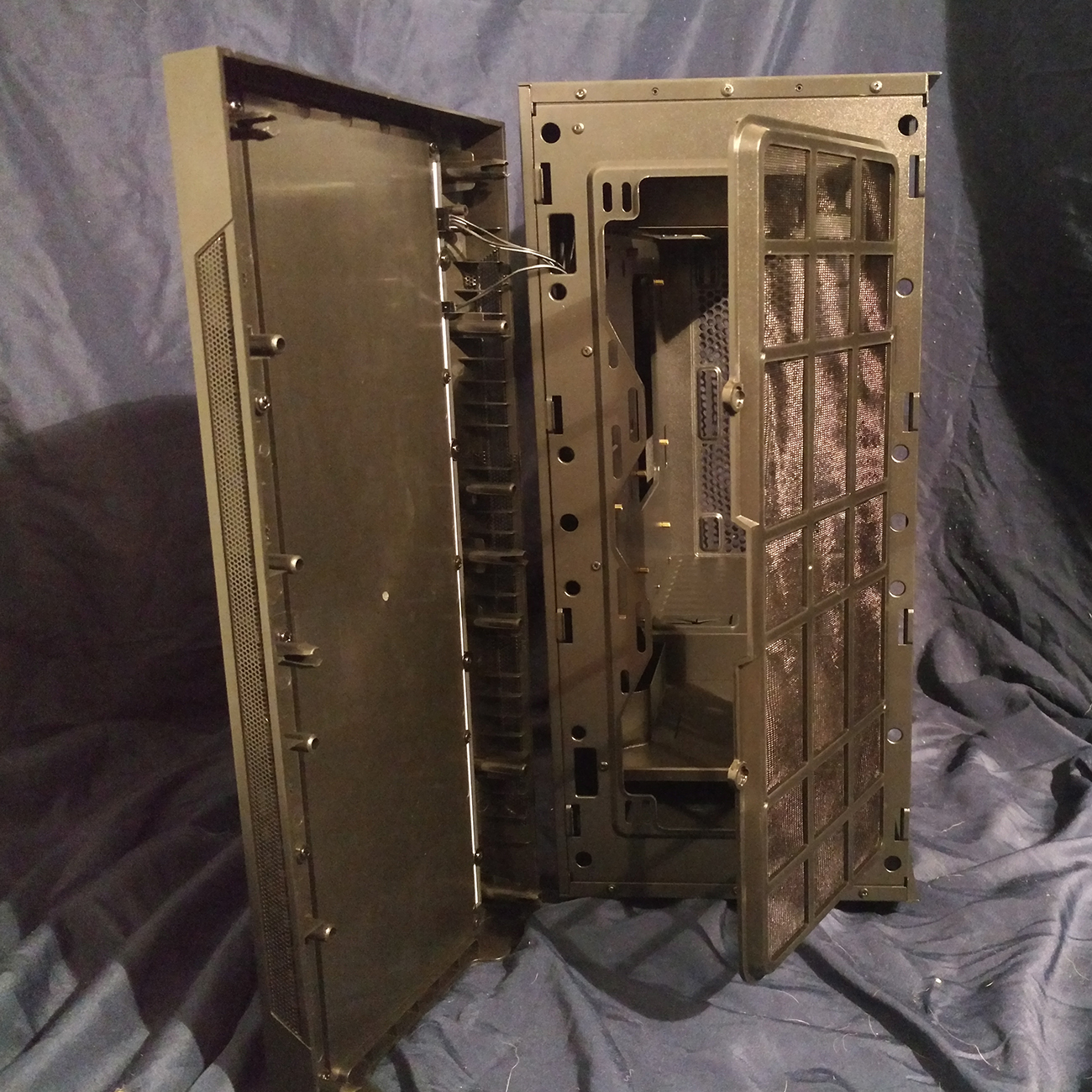 This is your IO access panel, lifting it up from the front of the case will reveal the IO of the motherboard as well as the GPU. 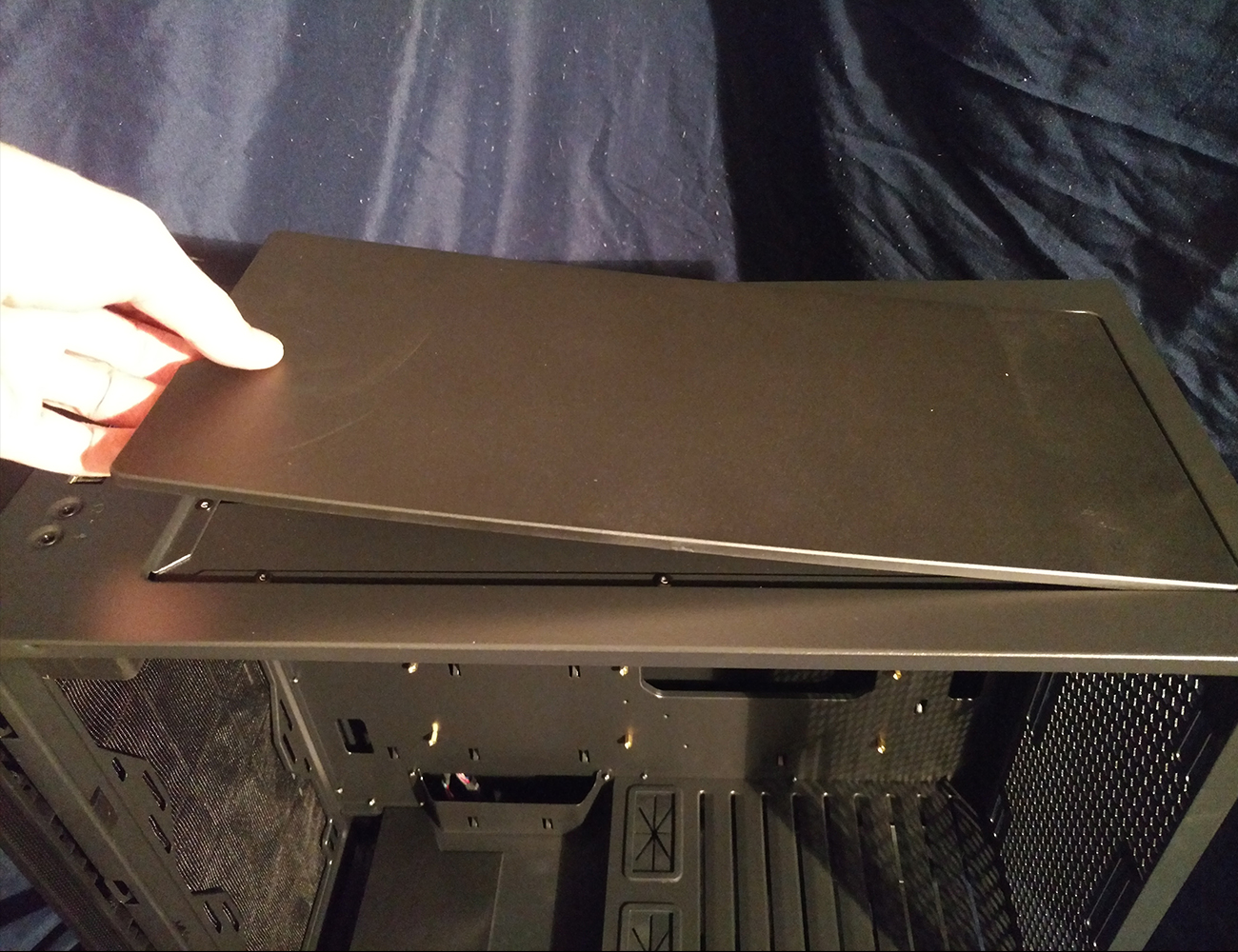 Here is where you will see the 7 expansion slots as well as the IO Shield cutout. 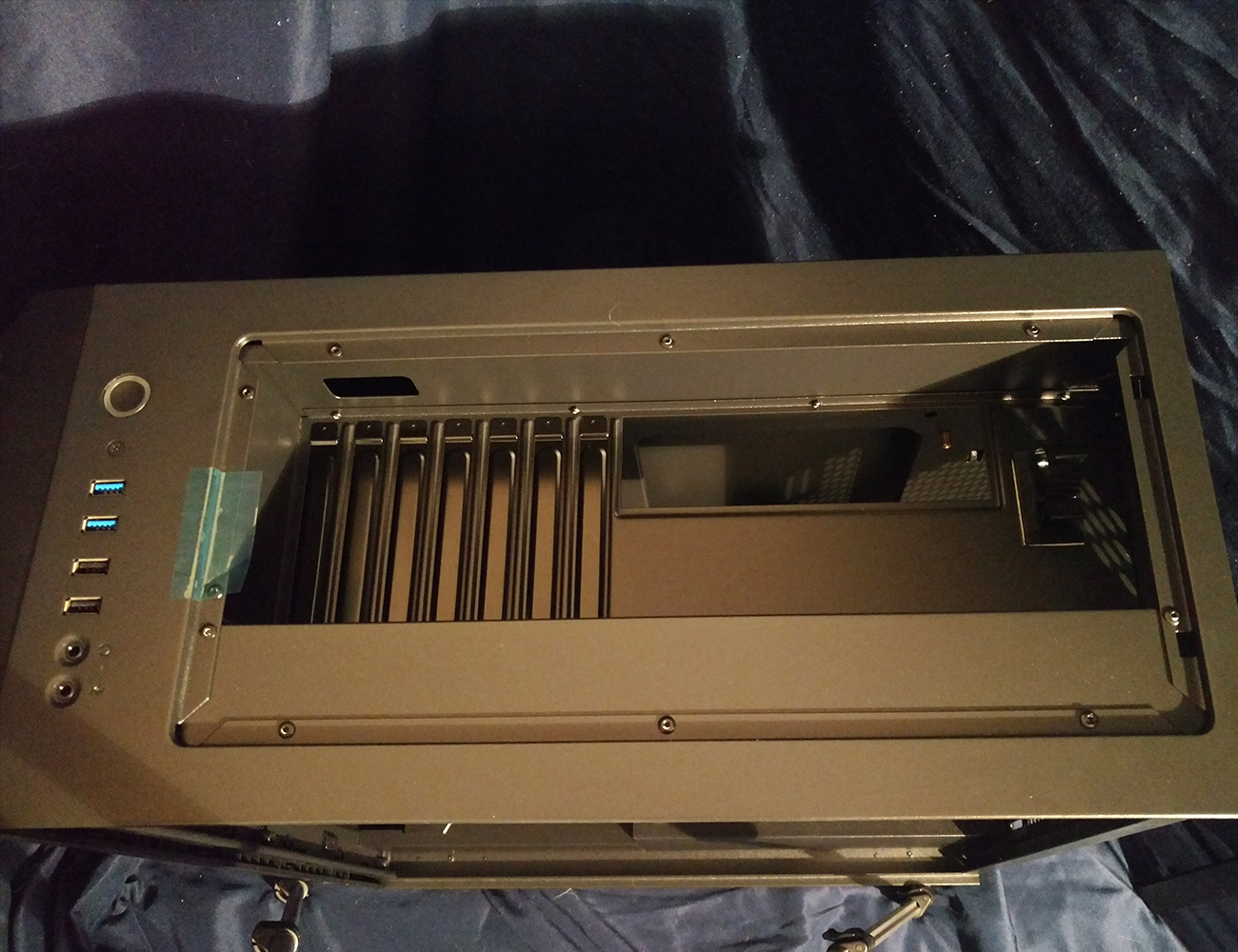 Once your system is set up it will look something like this under the top access panel, with the wires feeding out the back to be connected to your hardware, power or other accessories. 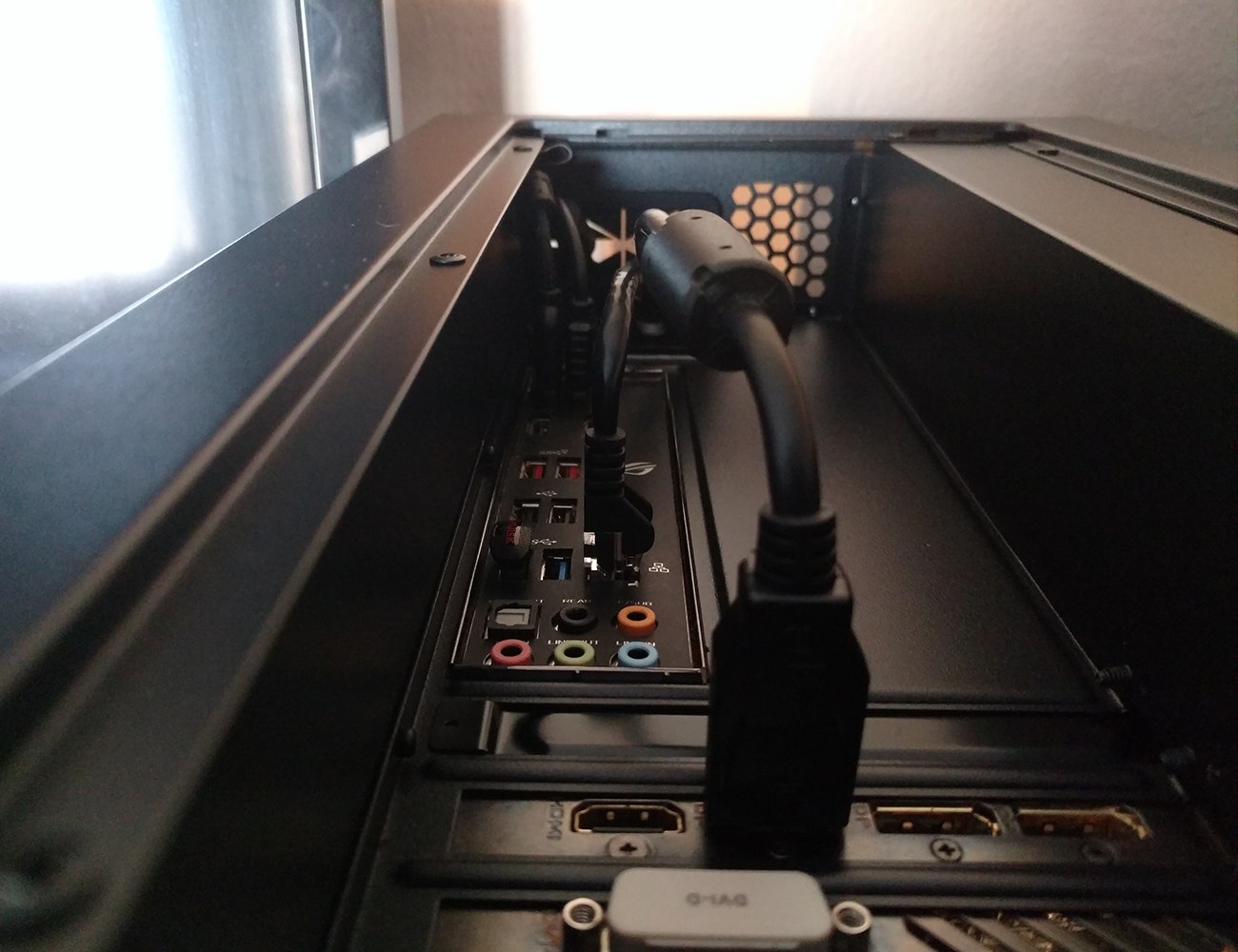 Here on the bottom is the other air filter included with the SegoTep Phoenix, situated under the Power Supply zone to allow clean fresh air through your power supply’s own ecosystem. 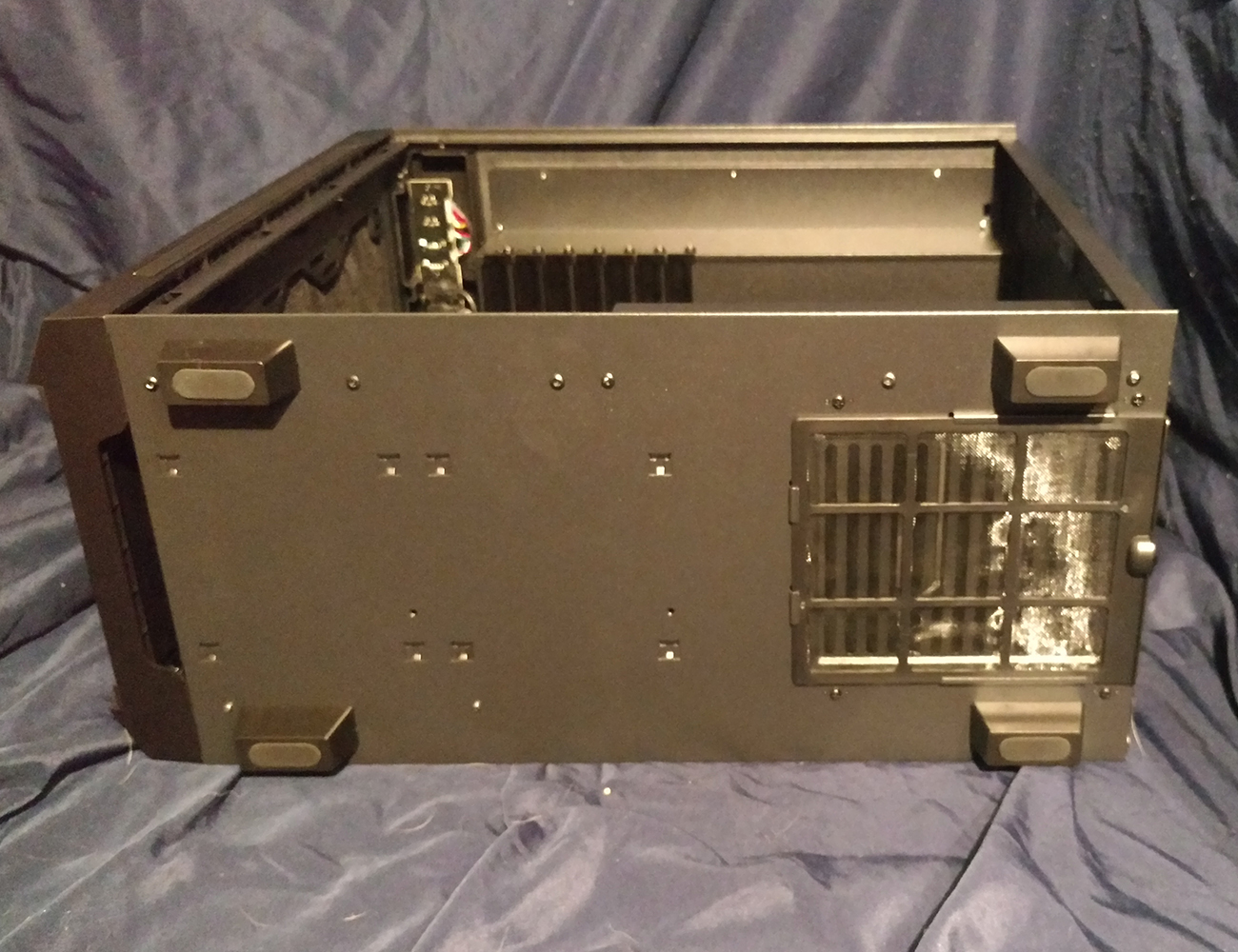 Here is another view of the top of the case from the inside, here you can see the expansion slots again as well as the PCB for the power button and RGB on the front of the case. 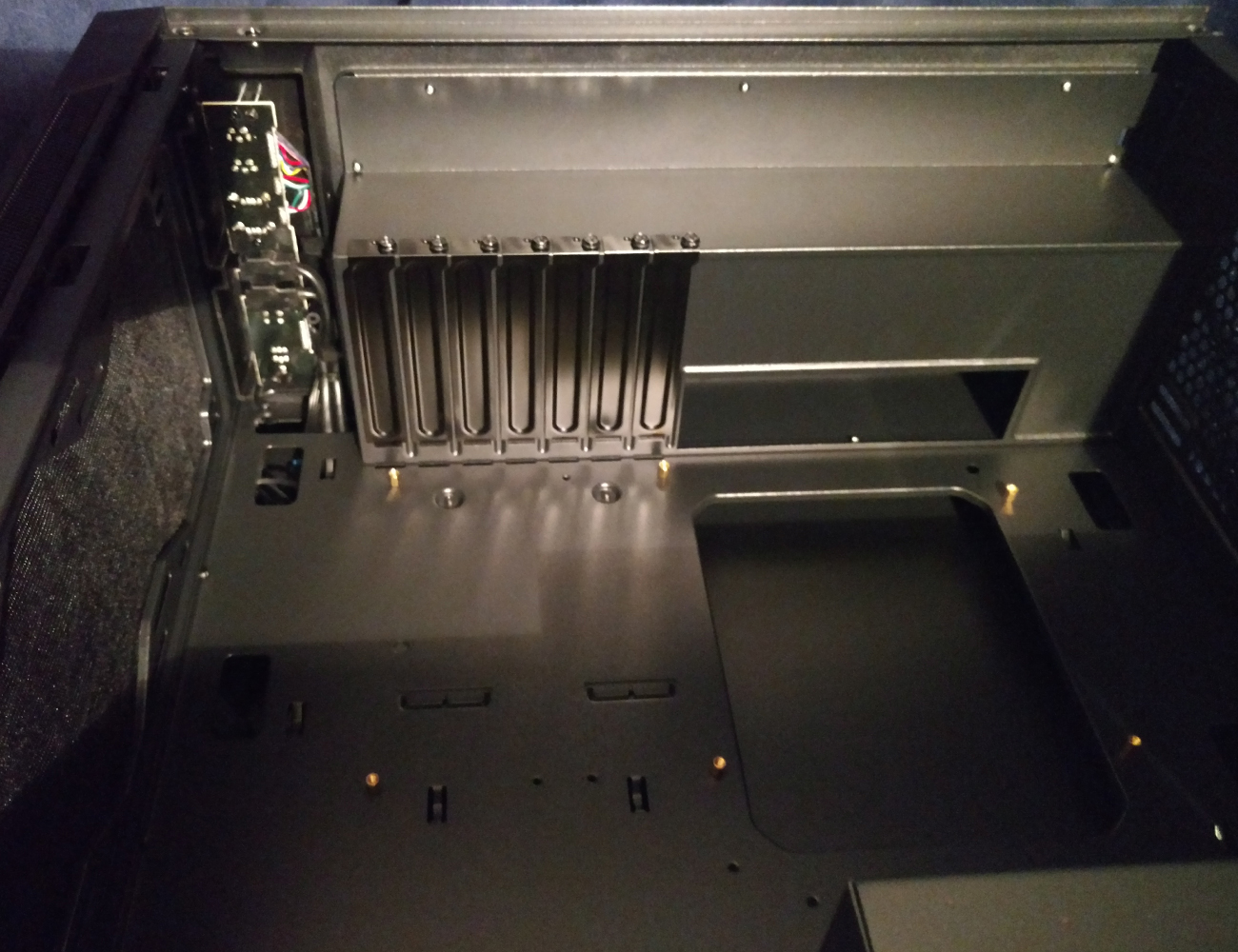 The back panel is held on similarly to that of the front glass panel. By loosening the two captive screws and lifting the door away it then reveals your hard drive storage locations and potential cable management possibilities. 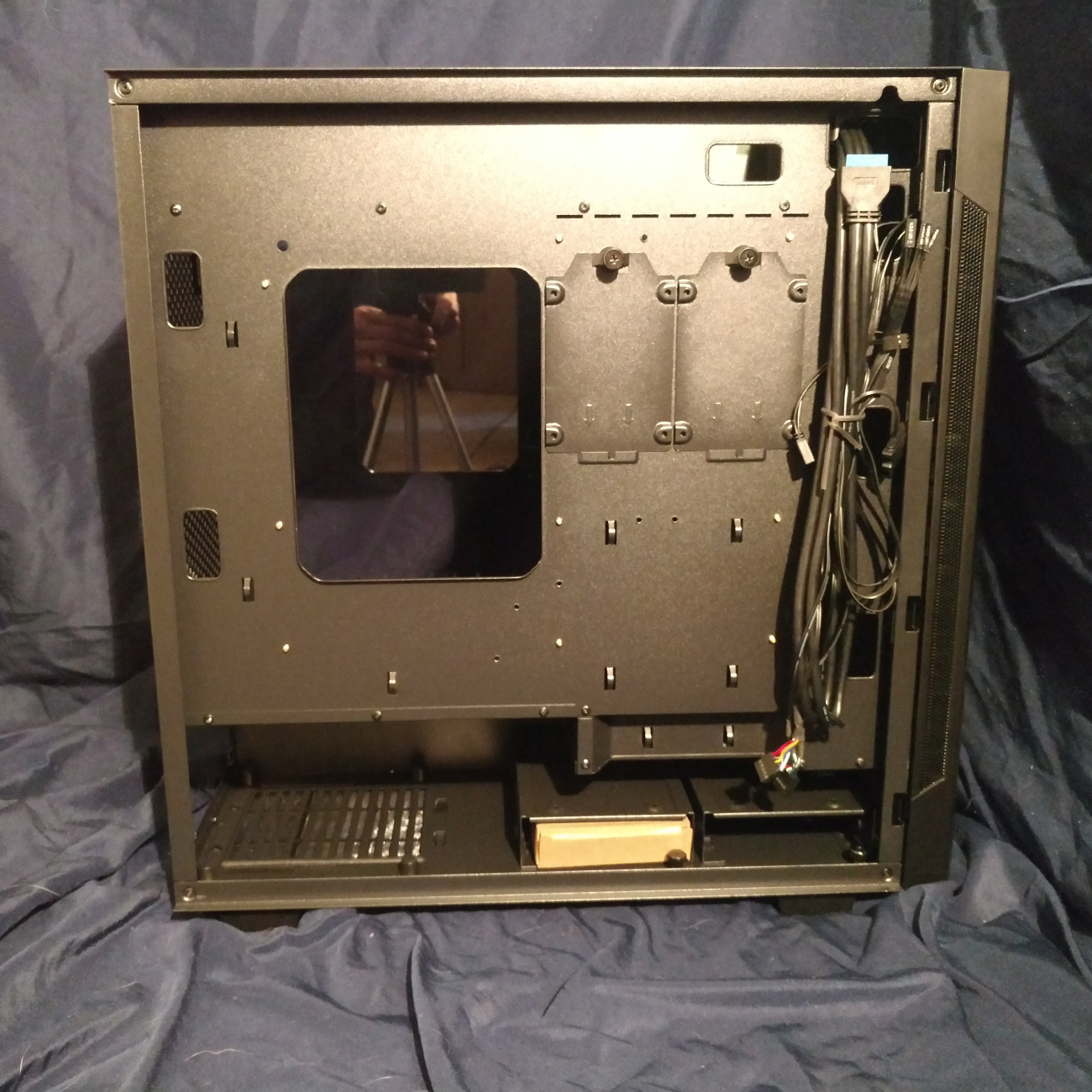 Here are all of your hard drive sleds, there are two dedicated 2.5″ bays and then below there are two more 3.5″ bays with an additional 2.5″ mounting spot each. This means you can mount a 3.5″ HDD and a 2.5″ SSD in the same bottom bay at the same time for a total of 6 storage drive bays. 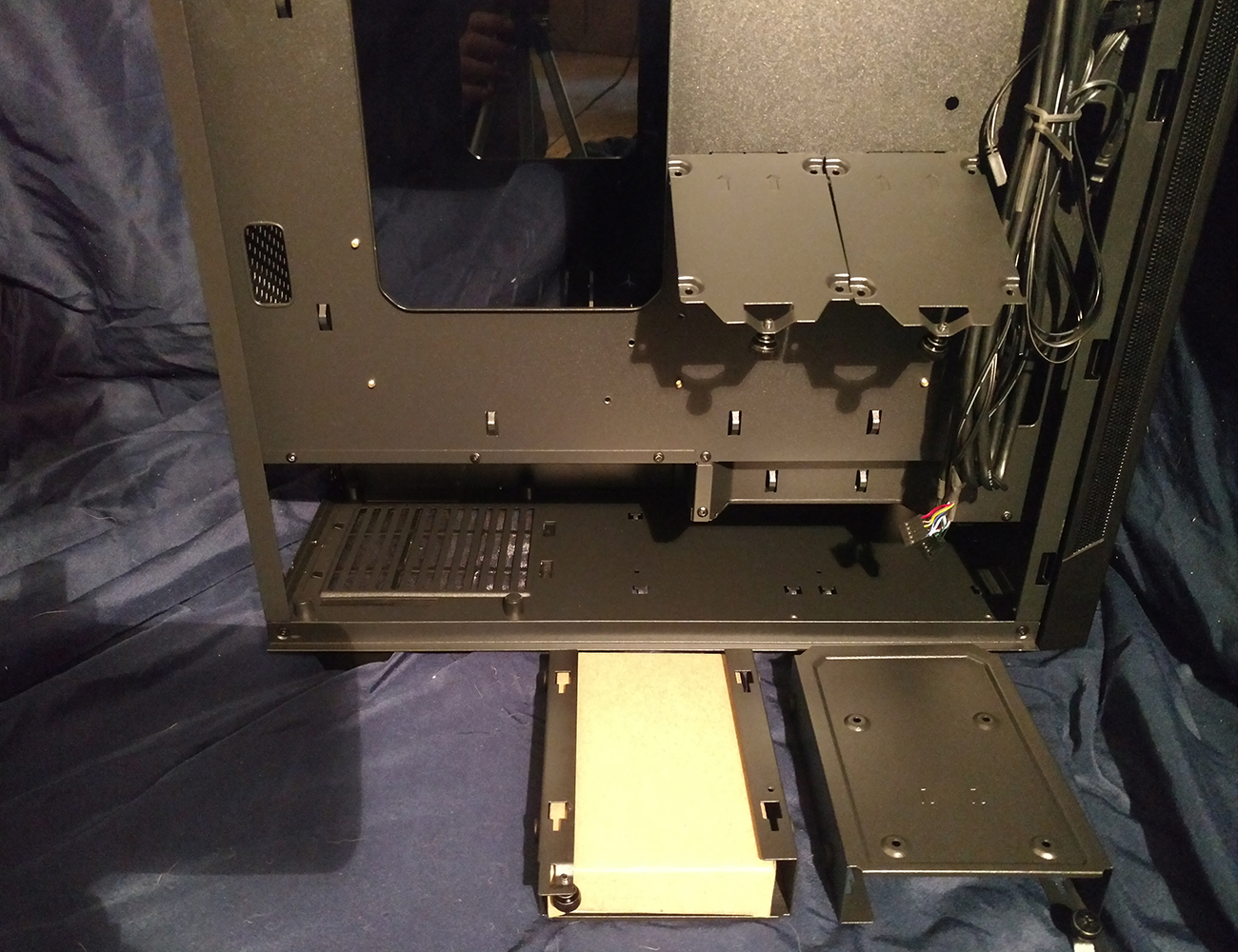 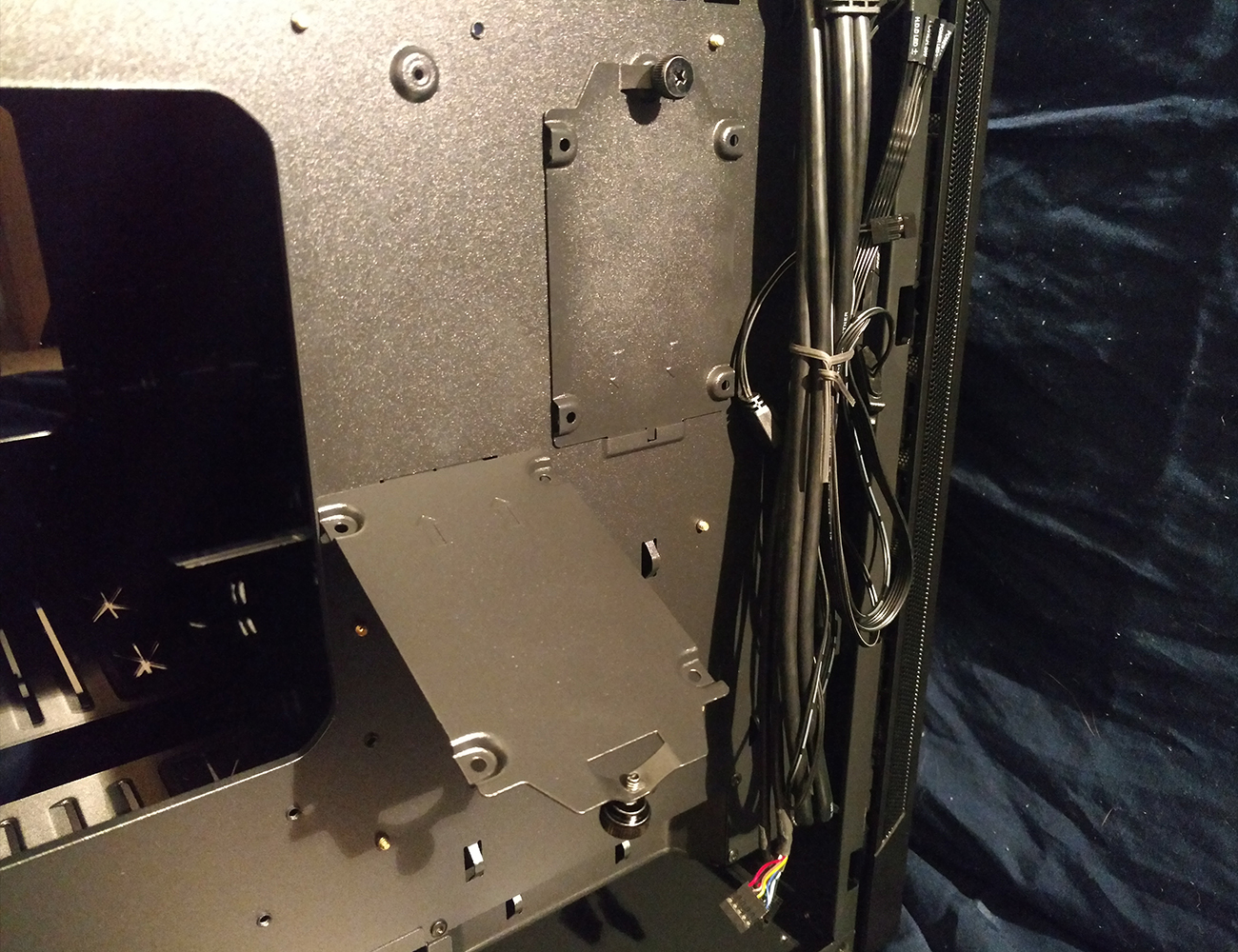 Here is a good view of the GPU clearance, as you can see with the rather large 3-fan GIGABYTE GTX 980 Ti XTREME there is still plenty of room left for more if needed. You can also see some of the SATA and GPU supplemental power cables routing, it is really easy to hide about 90% of the front cables with Segotep’s design here in the Phoenix. 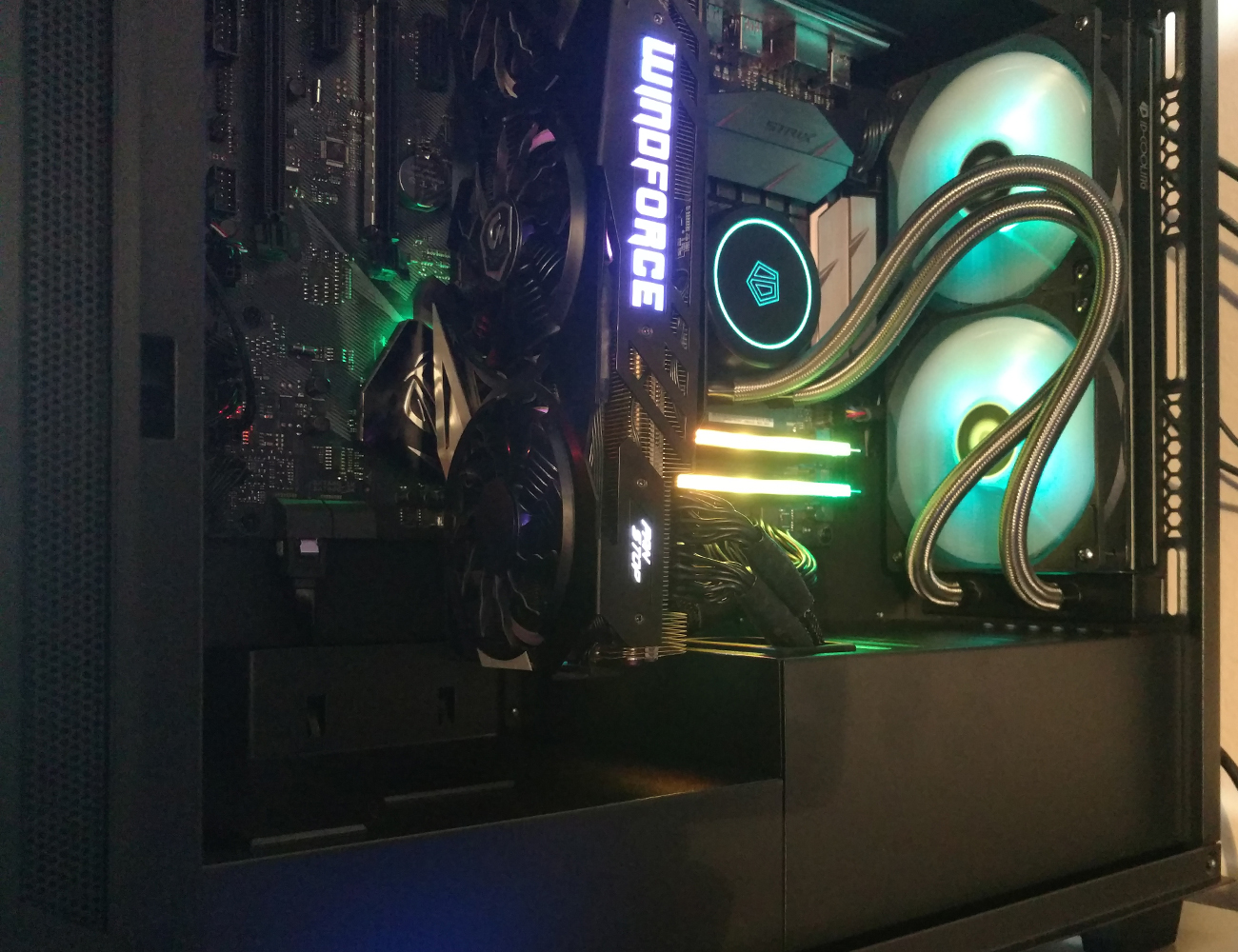 Here are all of the included accessories, Segotep has thought about it all with a list of screws for all of your needs and some zip ties to top it off with for clean cable management. All of this can be found in the little brown box pictured, tucked away in one of the rear 3.5″ hard drive caddies. 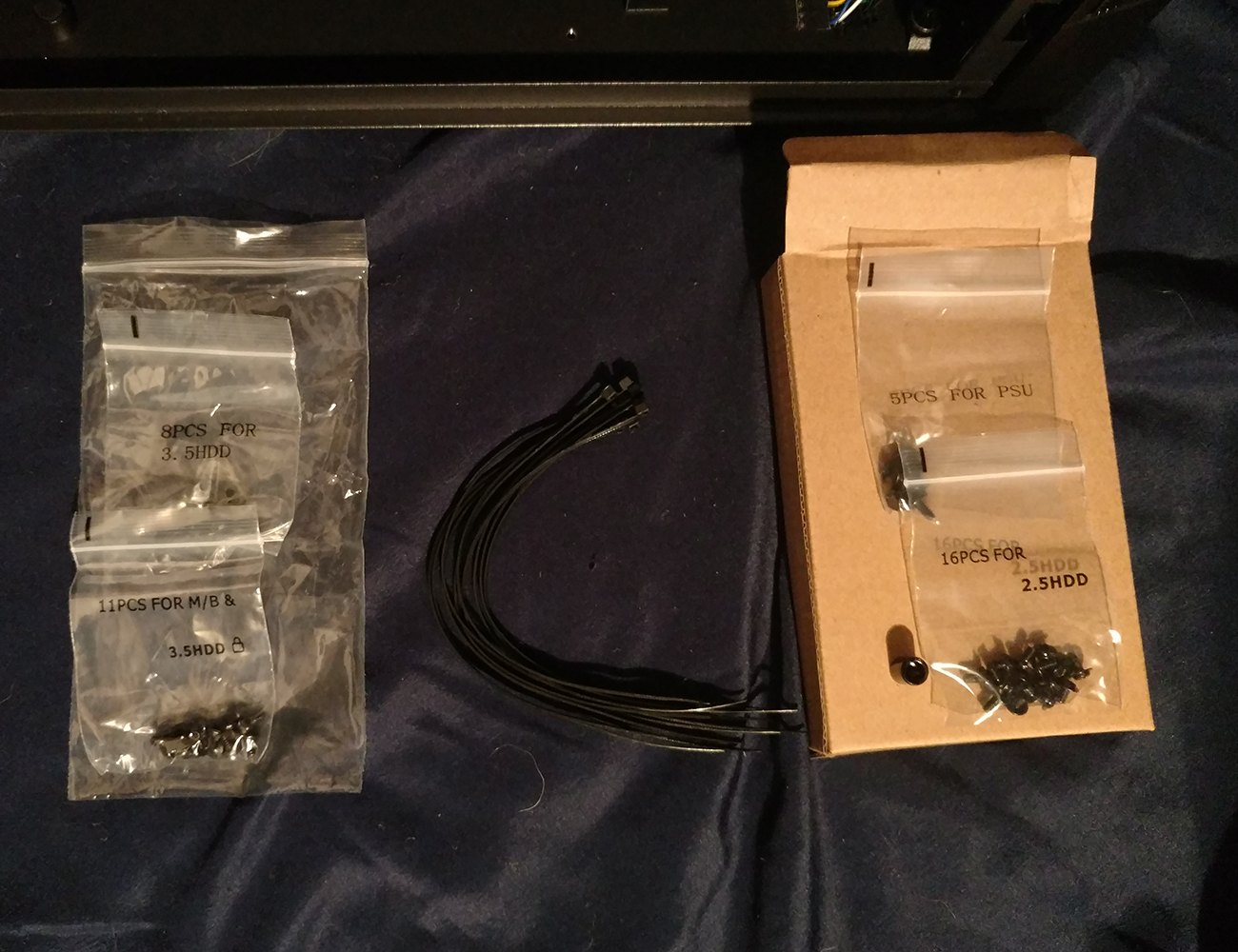 Other than the front RGB zone there are no extra included strips or fans. You can power the front RGB zone via a SATA power connector and simply change the effect with the little button to the right of the power button on the top of the case. There is no need for software with this method. If you opt to plug the RGB up to your motherboard that will change depending on the software needed for your specific motherboards RGB implementation. 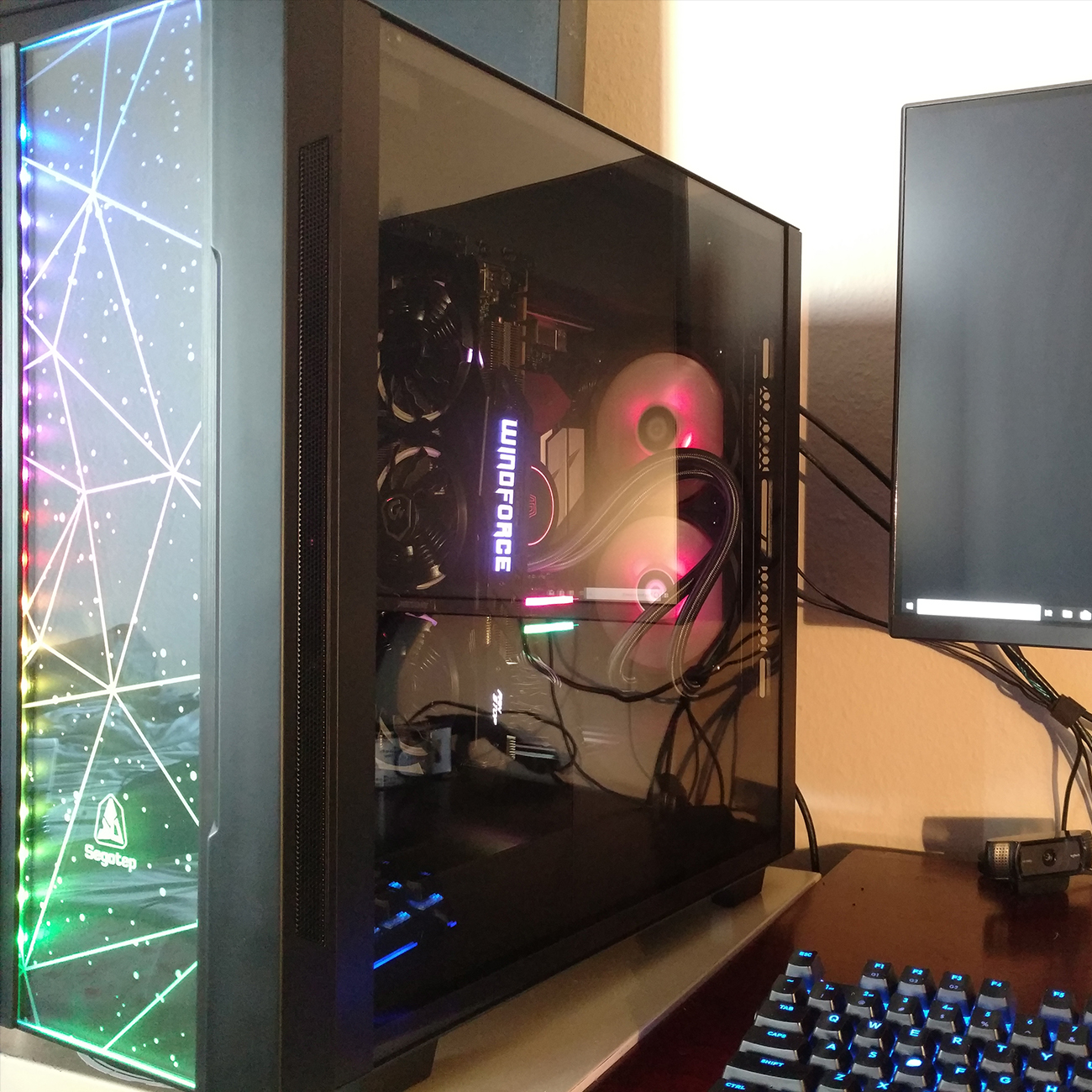 Building in the Segotep Phoenix was a very interesting time indeed. With everything turned upside down and around the Phoenix goes out of its way to make sure you know it is of a special design. As you would expect with an AIO in the rear and the GPU upfront thermals were great. My GTX 980 Ti actually ran cool enough I had to readjust my overclocks because the card was trying to boost beyond what the card could maintain. This was resulting in soft driver crashes where the card would revert to bare bone stock 980 Ti clocks. Lol was actually funny to experience, generally with air-cooled GPU’s you are thermally limited even before you run out of voltage. 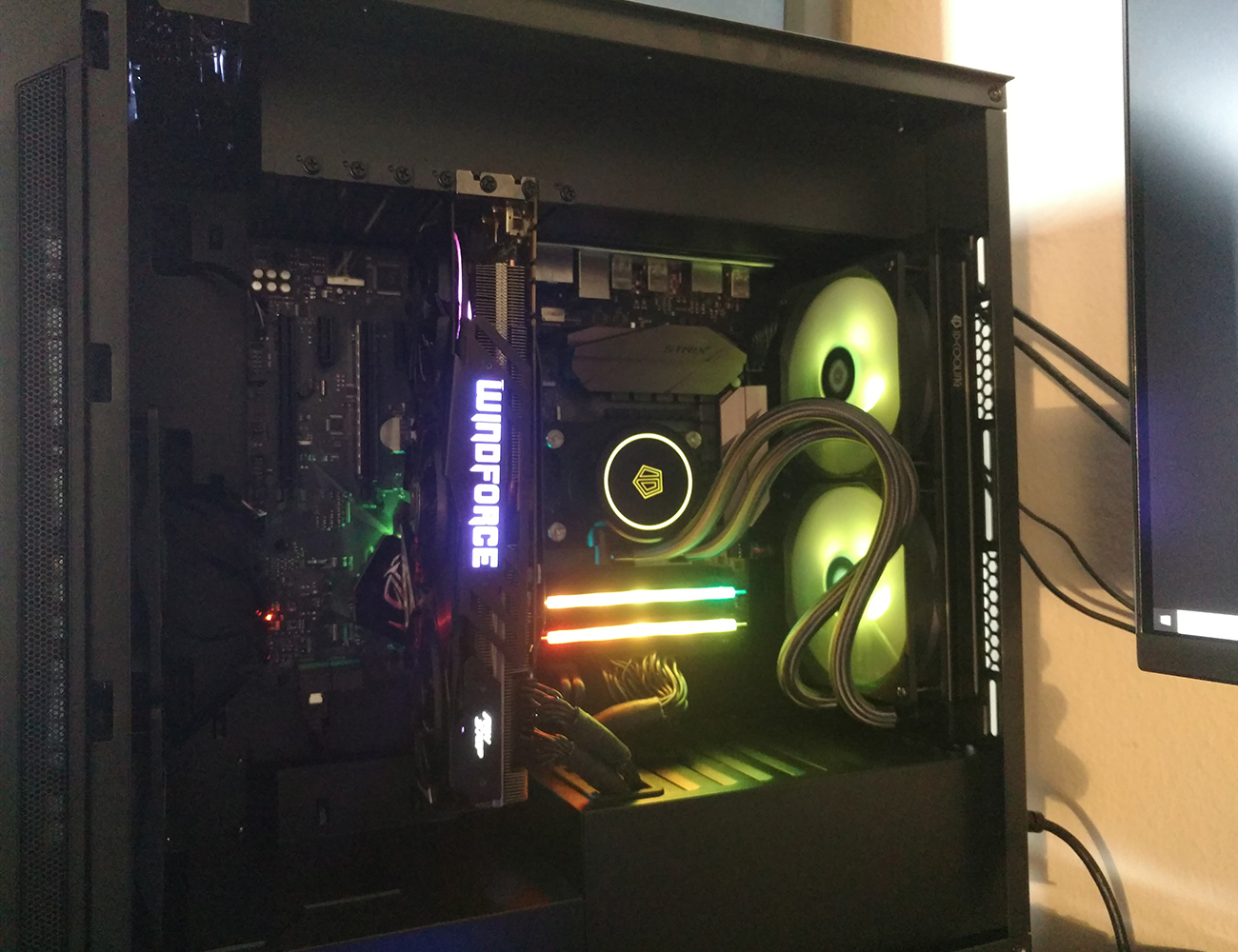 The Segotep Phoenix performed really well once I added some fans into the build, I will dive into this more in the Value section below. My GPU maintained sub 60c thermals generally hitting 50-58c in the titles and software I play and test. My R7 1700 clocked at 3.8Ghz with 1.25v stayed nice and cool never crossing the 60c threshold as well unless I was to render a project. Generally, during gaming, the CPU stayed in the mid-40s. The front panel vents could do with a small redesign with maybe larger open vent holes cut out of the plastic or just remove the mesh. This does hinder airflow quite a bit when coupled with the front intake air filter. Not enough to ruin thermals but enough to question whether I have managed positive airflow as I set it up for or if the case intake is managing to be beaten out by the rear exhaust. All in all the Phoenix performed really well and was designed to do so with your Graphics Card thermals in mind first.

This is the most interesting case design I have built-in so far. The upside-down and left of your desk build style will really turn heads and make people look twice. Which is exactly what some look for in their showcase build. With Graphic Card thermals first in the designs cooling your Graphics Card will purr at really low temps and low noise fans speeds. The overall weight of the case is rather light, and the glass panels on both the front and side are not the thickest you can get on the market by no means, but the way they are implemented is very well done. In no way does the thinner glass or lighter nature of the design lead you to feel like you got a cheap product. Everything has been well designed and fitted together here.

Now here I have to hit on some harder points because at even the $50-70 price point of the case market you are generally getting at least two fans included. There were no fans included in this $130 case, granted most of the time when you are designing a showpiece build you will replace the fans but not including them is a bit of a hard pill to swallow after years of being used to getting a few in much cheaper cases. This is not the end-all decider for my self and should not be for anyone else, it is just something to consider if maybe you are wanting to start with stock and build up the show build slowly. Next is the RGB it has a really nice effect from the front until you sit down to the side of the build and then the light shifts from lighting the front panel to the sides of the LEDs showing more clearly the further to the side of the case you get. I do not know if this can be stopped but it can be somewhat distracting at night, you just have to hold down the top RGB button for a few seconds and it will shut off if this is a bother to you.

All in all, this is a very special design, that took some thought and a lot of work to get fleshed out. I have only seen one case like this in person so far and I will say it is a head-turner once completed. Cases like the Segotep Phoenix are gambles, they a bit harder to design with success and either a hit or a miss with builders. The Phoenix is a hit here on my desk I give it a 7 out of 10 for value. If some fans were added and or the price dropped maybe $30 this would be a solid 10/10 for value in my book, you are getting a lot out of a special design that does a great job with thermals. If you are looking for something not only special but very different from the traditional PC case then I think you should give the Segotep Phoenix a look. 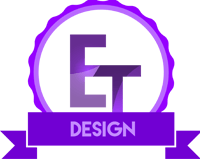 I want to thank Segotep for sending over the Phoenix sample for review.