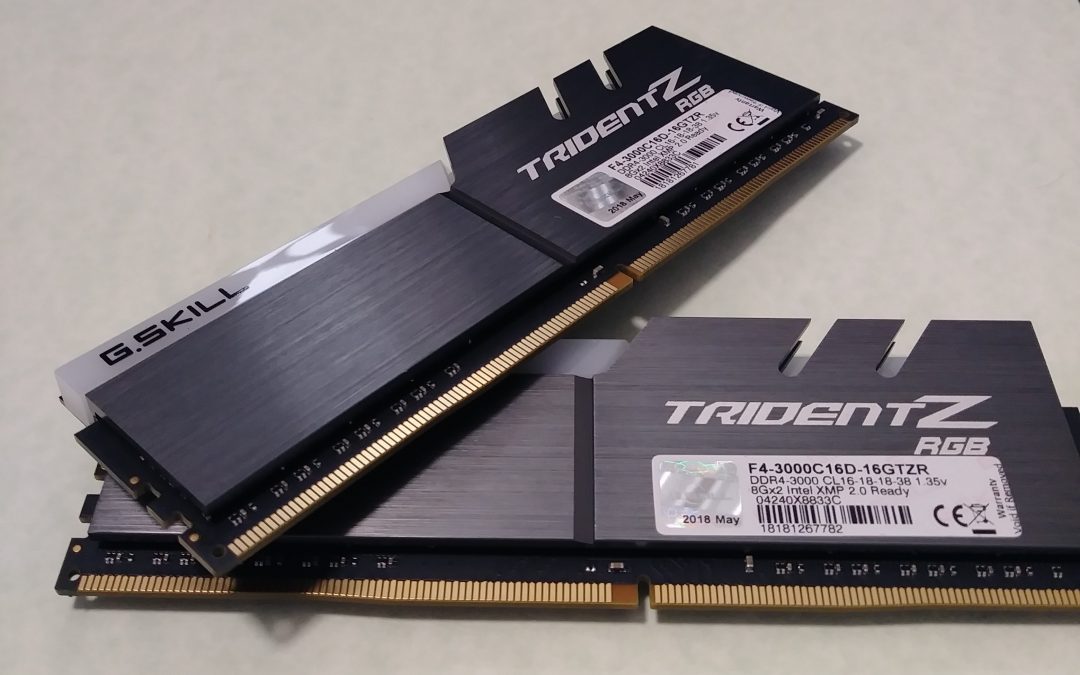 Today we are taking a look at the G.Skill Trident Z RGB CL16 3000 2x8GB kit of desktop memory. The G.Skill line up is a well known and broad one for sure, (including Aegis, Sniper, Ripjaw, Ripjaw X, Ripjaw Z, Trident, TridentX, Trident Z and Trident Z RBG) to name a few. All of the mentioned kits come in both DDR3 and DDR4 variants which G.Skill conveniently lays all of them out in a nice drop-down listing (including Series, Type, Capacity, Channel, Speed, Latency, and Voltage) with explanations of what each kit is and a basic one for what each kit use case might be. G.Skill has been around for many years and in my past experience has one of the best RMA and Quality control processes I have seen. It is fair to say they are my main goto for memory, though I have tested and used many varieties from other companies. 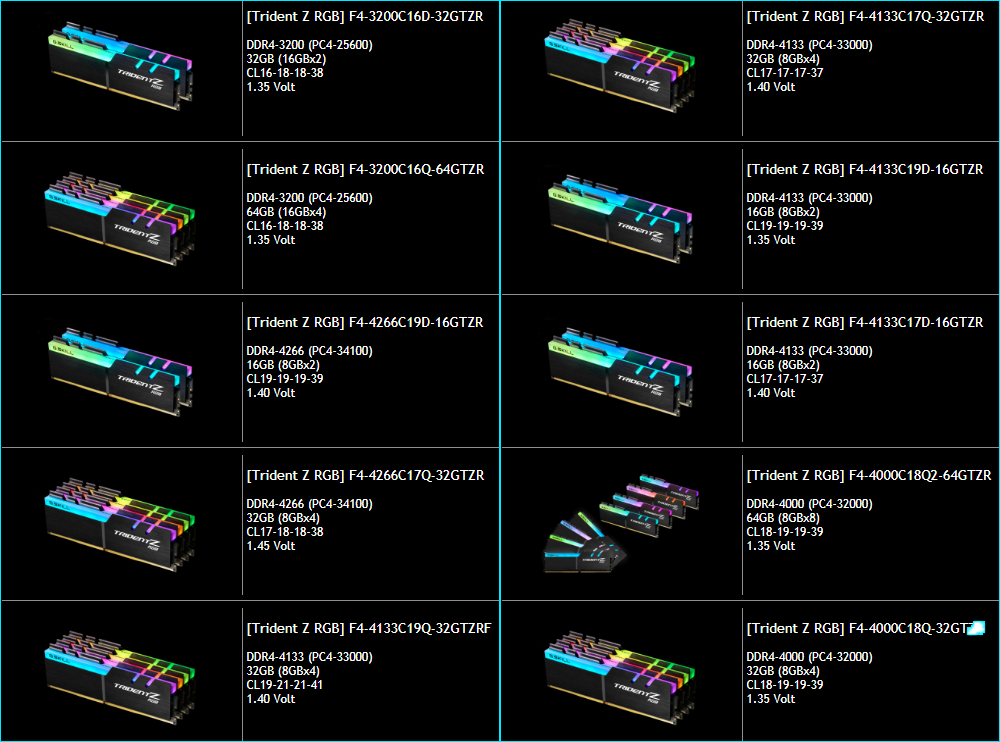 The Trident Z RGB kit we are looking at today is the CL16-18-18-38 3000Mhz 1.35v kit (the sticks run at 2133mhz @ 1.2v by default). The DDR4 Trident Z RGB line comes in a range of speeds and kit sizes ranging from 2x8GB = 16GB kits all the way up to a monster 8x16GB = 128GB of production goodness. I have personally never found a need for more than 32GB of memory in my day to day use in the video production department. All the kits bear the same sleek and commanding design featuring beautiful hair-line brushed aluminum heat spreaders topped with what is, in my opinion, the best and cleanest light diffusing RGB option on top of a stick of ram today. 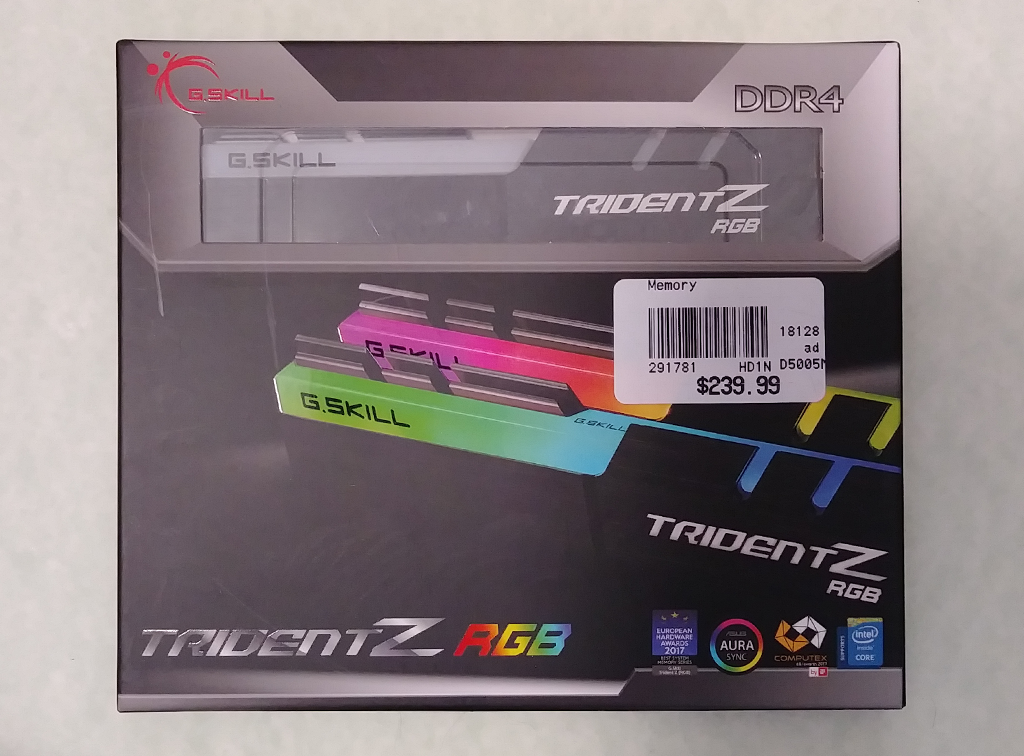 The packaging of the kit is up-scaled from the standard blister pack to a more protective and flashy one featuring a nice box with all kinds of details wrapped around the blister pack. The front of the box displays the type of memory with a little cutout to show the spreader through the front of the box with a photo of the kit on there as well as plenty of info pointing to their RGB capabilities, compatibility and awards. The back of the box sports more of the Trident Z RGB aggressive branding and a quote “Truly Brilliant, Extreme Performance” followed by a short write up on the memory, follow that up with some minor warranty, business and kit info on the bottom half. 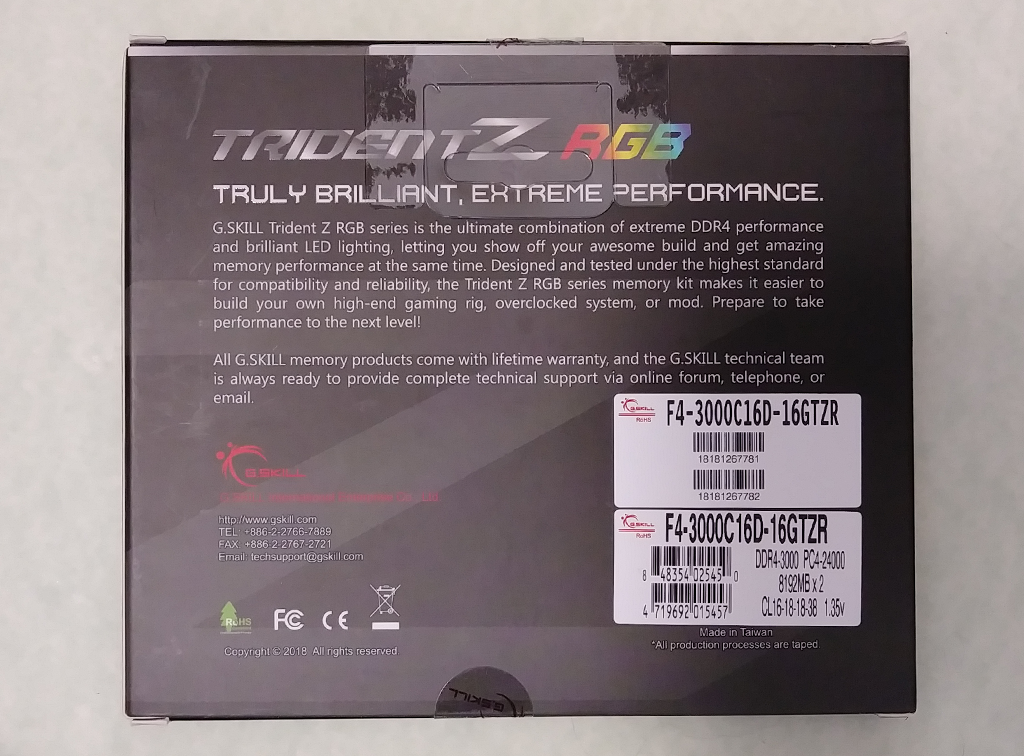 The DDR4 Trident Z RGB sport a beautiful hair-line brushed aluminum heat-spreader one side a darker grey than the other. I actually found myself appreciating the dual color in this instance feeling like the non-visible (from the front/side on open cases) areas of the ram having the lighter grey which allows them to react to the RGB more than the darker reverse sides you can see sitting at your desk allowing a nice wash of color between the sticks and helping the TRIDENT Z logo on the darker side take and hold the current color as well. I would also like to note the attention to one of the most annoying details about memory today (THEY PUT THE INFO STICKERS ON THE PROPER SIDE) yes you will not have to deal with a bright white sticker ruining the composition of your build with these modules. Now I know we all know at this point that the debate over there needing to be any real heat dissipation on memory is a well beat and long-dead horse of a conversation, but that doesn’t mean that they do not look very good when implemented properly. And they are just that. . . Memory Bling, well G Skill really knows how to build Memory Bling err I mean heat spreaders right! The thermal solution or not these are some not only very good looking heat-spreaders but are super high quality feeling as well. 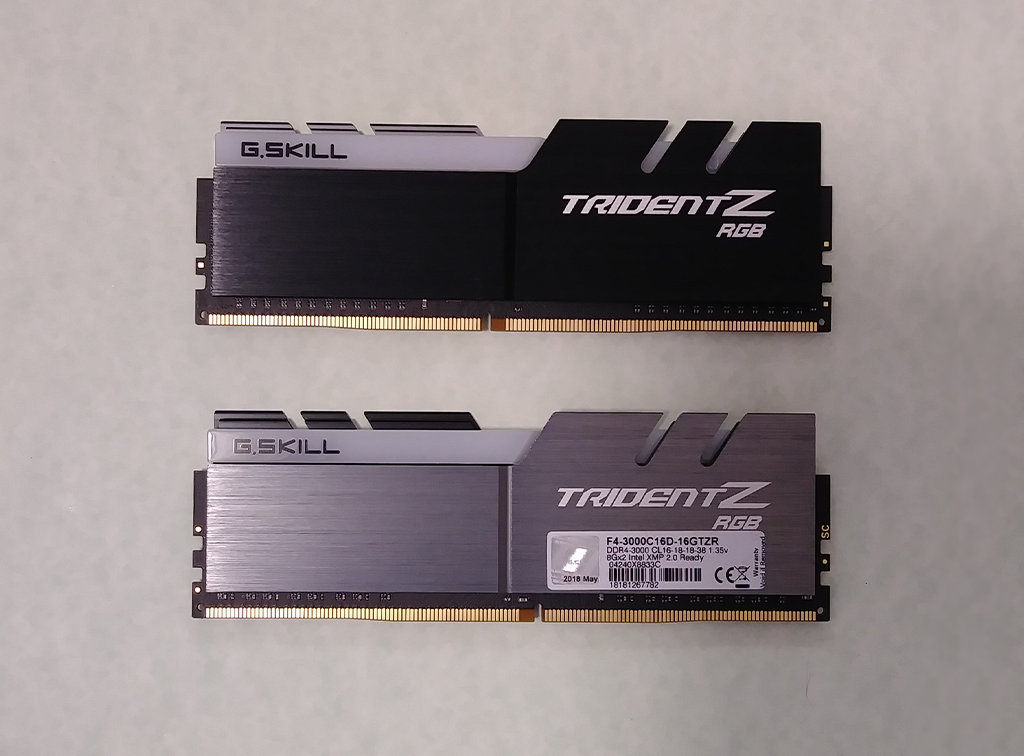 The G.Skill Trident Z RGB is a truly beautiful set of memory to look at all the way down to its black PCB, which is something nice to see instead the horrid green we lived with for many generations. You can really see the hair-line details on the aluminum and the aggressive cut to the top of the spreaders encasing the light dissipation bar which helps the array of LEDs spread their light in a smooth and flowing manner. 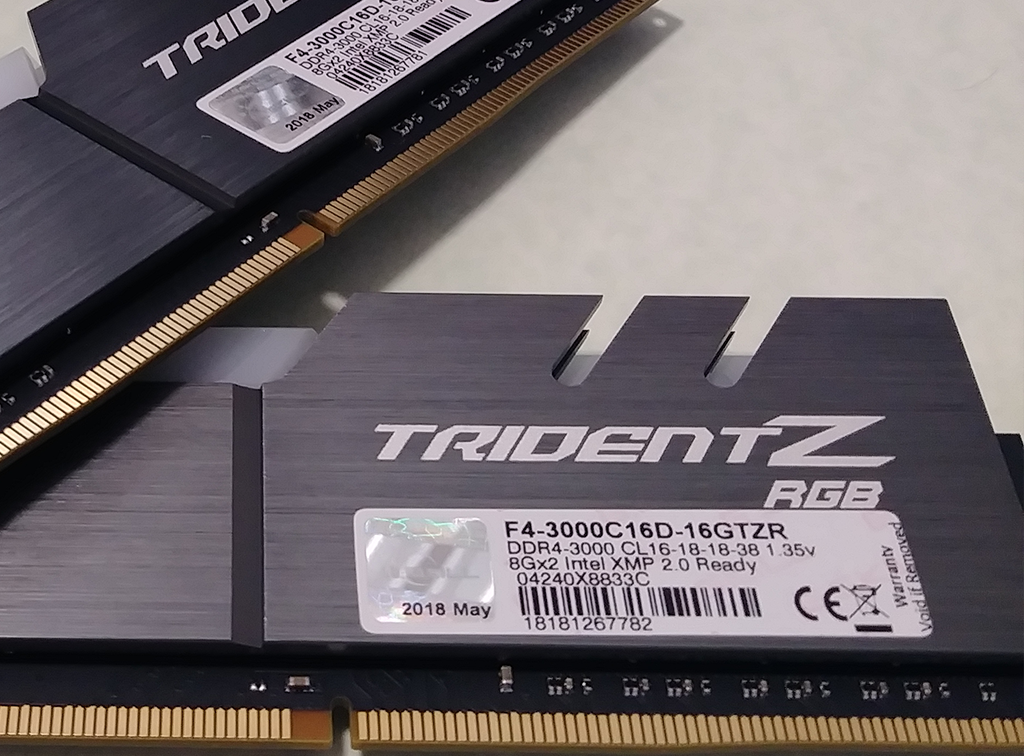 The Trident Z RGB is a prime candidate for a case with a Tempered Glass panel for sure, I love the look of them in my Phanteks P400TG with the slightly tinted glass that helps to smooth the light out some so that the RAM added to the 3 RGB strips and Wraith Spire cooler already in the case didn’t become overbearing. I will note not that it matters for test purposes, but I tested with both the Wraith Spire and Masterliquid Lite 120/240 coolers and I had to keep the Wraith Spire in the end for the extra RGB off the middle of the build. If RGB everywhere for some reason becomes important to you like it did me then you will want to invest in an RGB thermal solution if you do not have one. The white light on the Masterliquid pump header did the RGB of the rest of the build no favors throwing it off in the middle. 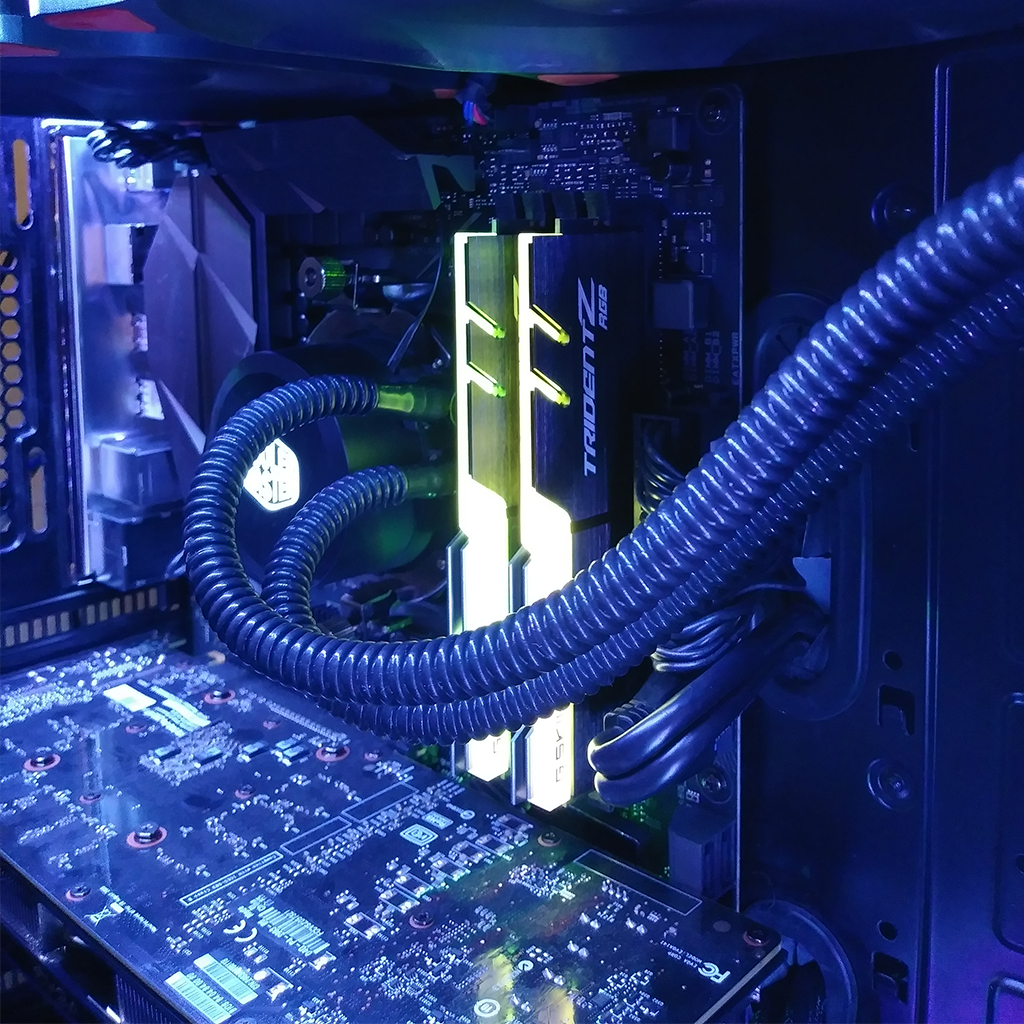 RGB Software and Compatibility – I ended up using my AURA Sync and it works like a charm. A wide variety of effects and colors to work with to liven the inside of your build right on up. G.Skill also offers their own flavor of RGB Software control as well, I have an ASUS ROG Strix B350-F which comes with ASUS Aura Sync RGB Headers. Disabling the memory on the Aura Sync Software does nothing and with the ASUS Aura Software installed the G.Skill software will default to the ASUS Aura Software. The Trident Z RGB memory is compatible with Aura Sync, RGB Fusion Ready and Mystic Light Sync on top of having their own control software.

The “Smart” lighting mode now here I want to talk a bit, the effect is supposed to change color with CPU and or GPU load. The catch is if you use any kind of monitoring software like CPUZ, or HWINFO and so on that while using this effect and other software to monitor your temps will cause a hard lock that will only shut down via the power switch on the back of the power supply. Yes, the operating system and power switch on the case becomes completely locked. So my advice is if you use other software to monitor your temps is to stay away from this for now.

To test my very first kit of GSkill DDR4 goodness, I ran a few benchmarks (AIDA 64 and SiSoftware Sandra). As the graphs will show, the G.Skill Trident Z RGB CL16 3000 kit is more than enough for most standard and even higher end gaming builds using DDR4. 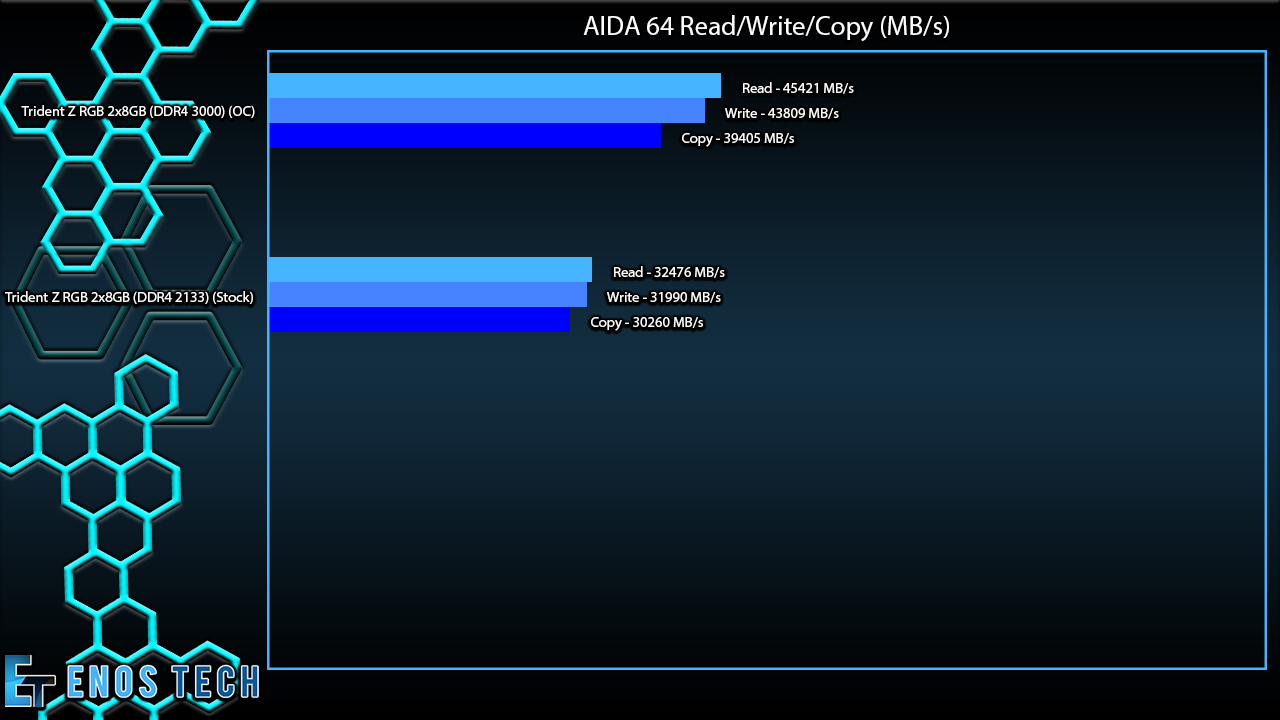 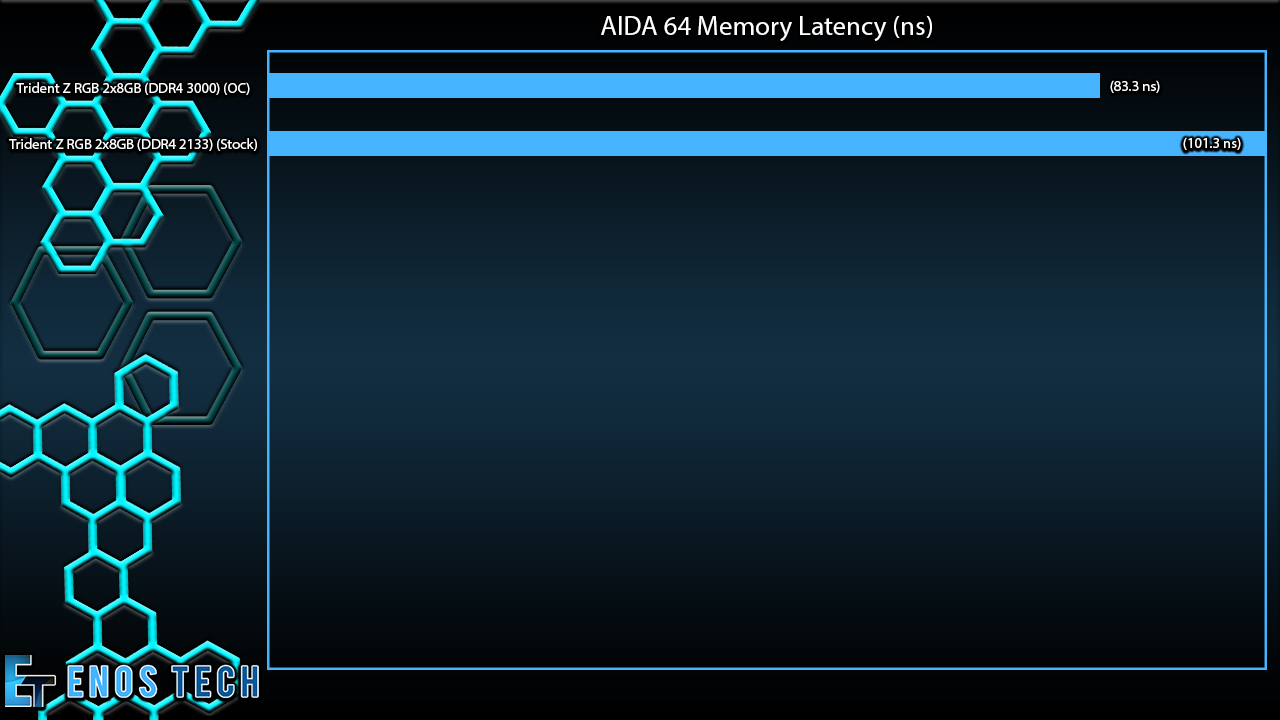 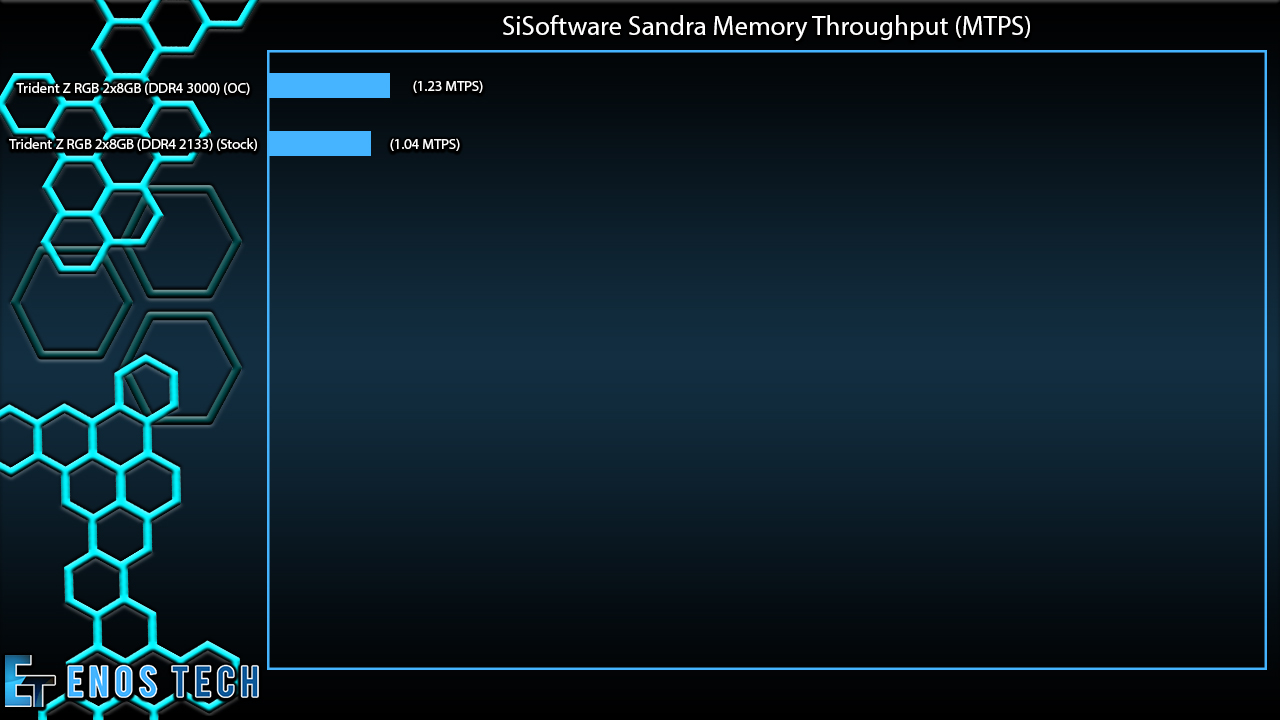 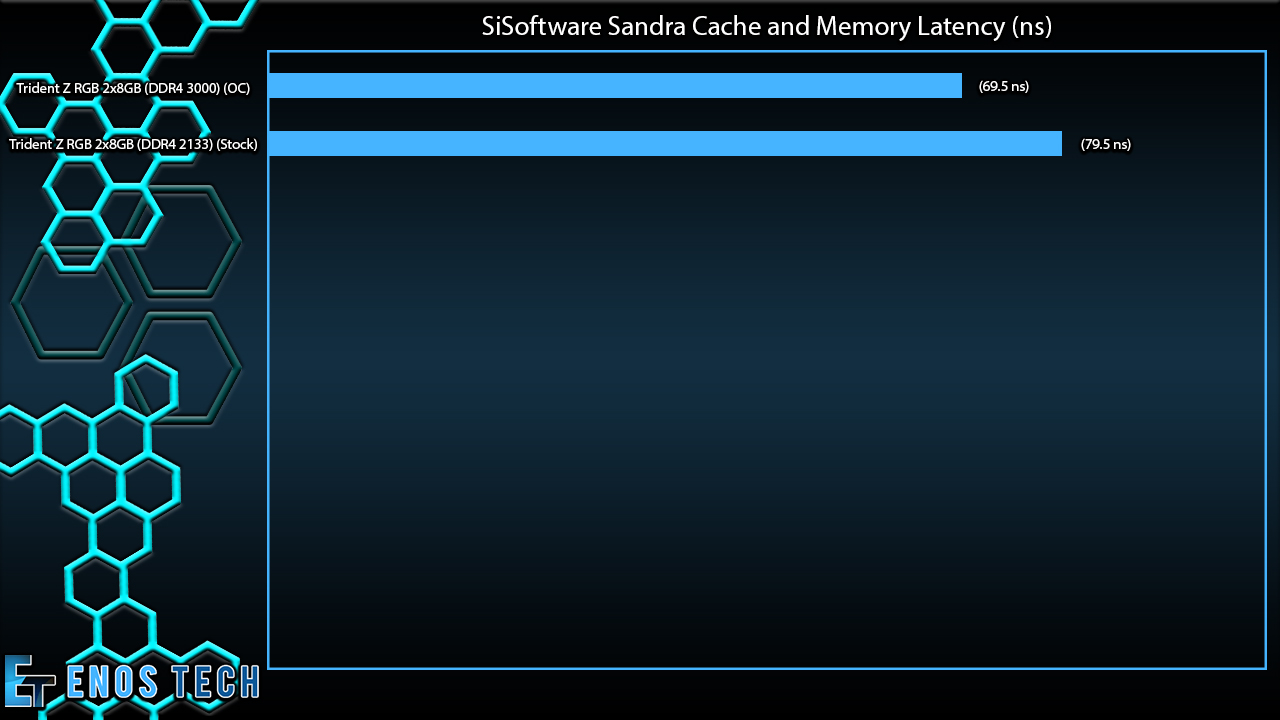 The overclocking ability of the kit wasn’t anything to brag about on my test bench. Running them at the stock 2133Mhz on a Ryzen build makes no sense, considering we all know that down that path the faster the memory the better the Infinity Fabric operates. I was able to get the kit to 3200MHz at the standard CL16 timings with a bump from 1.35v to 1.38v which isn’t much of anything in the voltage department of these DDR4 modules. Getting the modules to 3200mhz didn’t show a lot of anything different and that is probably due to my lack of memory overclocking skills more than anything else. I was not able to even tighten the memory to even a 15-15-15-32 @ 3000mhz and this is due to either my lack of memory overclocking skills or the Ryzen platform’s issues with non-Samsung B-Die modules. I am sure in the right hands these could be used to speed up the memory speed hungry Ryzen platform even more!  This specific kit has 8GB Hynix A-Die memory modules, so I do know these would not have worked out of the box at the CL16 3000MHz OC settings like this when the AM4 platform first launched. Out of the package on my updated BIOS (version 4011), they plugged in and took the timings and voltage for CL16 3000MHz no problem booted and benched right on through as well as running at the stock 2133MHz @ 1.2v. A huge improvement on the Ryzen end of things since these are Intel timing sticks and originally would of probably of caused a large headache when the AM4 platform first launched. Included below is the B-Die and JEDEC info for the kit of memory as well. 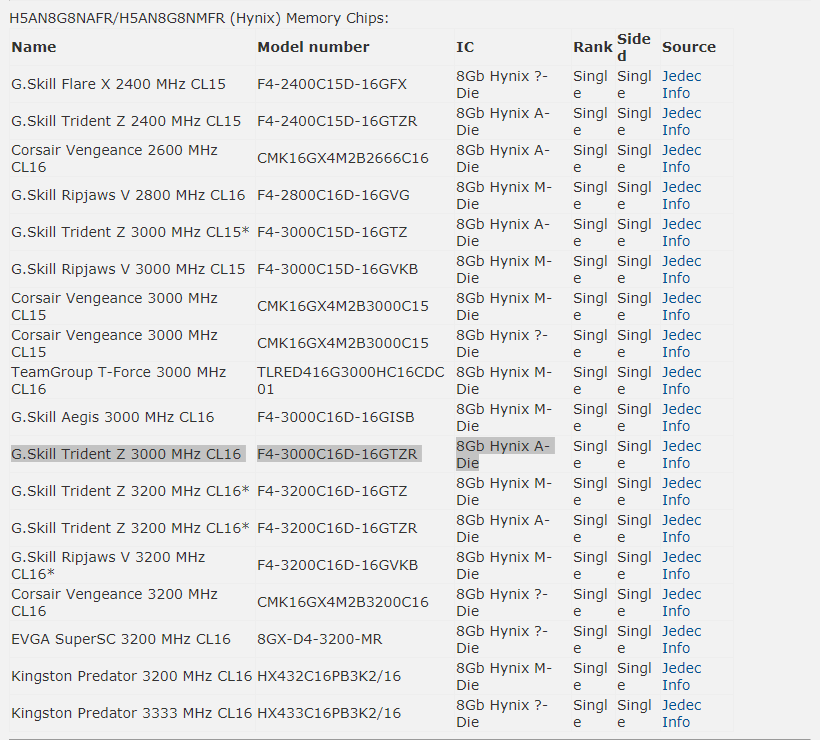 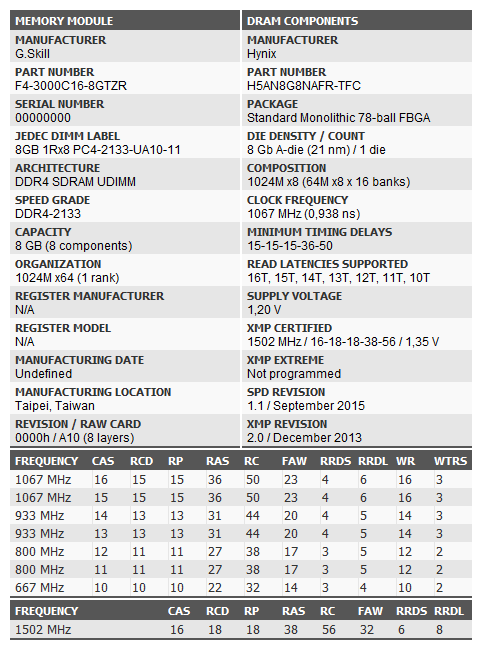 Performance – Even though I was able to get that extra 200MHz to hit the Ryzen 3200MHz sweet spot I didn’t see any real re-portable difference with all of my tests. With them falling in to close to the margin of error to count. My kit of G.Skill Trident Z RGB performed exactly as expected and unless you are a seasoned memory overclock-er there are probably not a lot of gains in pushing the kit much further for gaming. The G.Skill Trident Z RGB lineup starts out at 2400MHz all the way up to 4266MHz!!! Speeds are surely getting crazy these days. The 3000MHz kit is a nice little bump over the 2400 speed and a really nice entry point for high-end gaming and enthusiast who want a build where the look of the ram is as prime as the performance of the memory themselves.

Value – With today’s minefield of a Memory Market which has sent prices sky high worldwide, due to a list of reasons which are still being sorted, the G.Skill Trident Z RGB CL16 3000 2x8GB kit is reasonably priced. Prices are changing on a whim every day and if you keep your eye out this kit can be snagged on a sale like I landed them for. Looking around Amazon and Micro Center shows a similar trend with all the other major Memory brands on the shelf at the moment, with all of them ranging from $40-50 cheaper to $40-50 more for the same speed and CAS timing kit depending on brand and extra elements (RGB) and (CAS) speeds mainly. The prices are still a little steep but all things considered with the market they land right where I think they should be and offer a really nice choice for those who just have to have those extra MHz behind their RAM! (the $239.99 non-sale price tag says plenty)

Final Thoughts – The G.Skill Trident Z RGB is a great set of memory for plug and play, and you can just pop them in and go, or choose to tweak the OC settings manually to the rated speeds and or beyond if you are skilled enough in such PC tweaks. You can even run with one of the many XMP Profiles for Intel and D.O.C.P. Profiles for AMD CPUs, no matter what your choices or reasons may be memory options are wide and far these days with many offering overclocking room for more with the right settings.

From the commanding design to the rock-solid performance the G.Skill Trident Z RGB get our MUST HAVE Award!