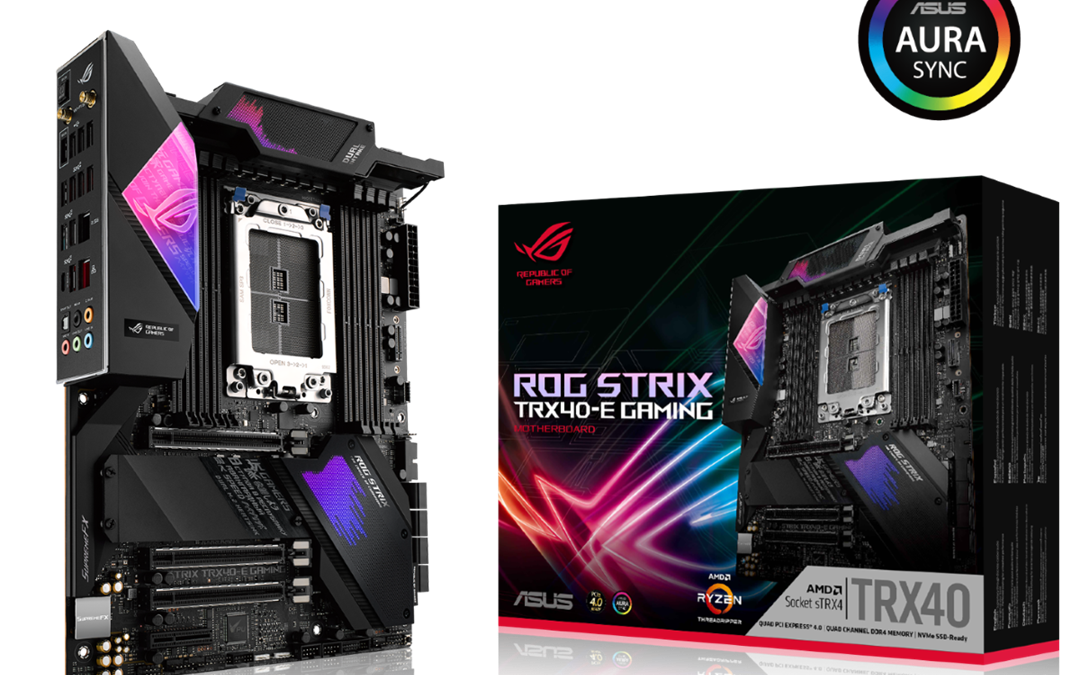 Teamed up with the TRX40 chipset, 3rd Gen Threadripper CPUs bring PCI Express® 4.0 to the high-end desktop for the first time, doubling bandwidth across a total of 64 PCIe 4.0 lanes to allow for even faster SSDs, graphics cards and AV gear. Every PCIe® slot and M.2 slot in the ASUS TRX40 lineup is wired with PCIe 4.0 connectivity for maximum bandwidth, meaning any expansion cards slotted into an ASUS TRX40 board will run as fast as they possibly can.

For high-end desktop users, the TRX40 series offers four memory channels for up to 256 GB of RAM across eight slots. The new 3rd Gen Threadripper CPUs maintain their predecessors’ support for ECC memory, too. This empowers PC builders to take their rigs to new heights with bumped-up 3200MHz stock RAM speeds and push the limits even further with an extra boost from exclusive OptiMem III technology in the Republic of Gamers (ROG) Zenith II Extreme.

There’s a ROG or ASUS TRX40 motherboard for everyone, from professionals who want the most of everything and hardcore gamers obsessed with performance to first-time builders seeking the ultimate PC experience. For further details about our ROG lineup please visit ASUS ROG. Our guide with complete specifications and images for the entire lineup of TRX40 motherboards is located at ASUS Edge Up.

ROG Zenith II Extreme is perfect for professional users and gaming enthusiasts looking to explore the limits of 3rd Gen Threadripper CPUs’ core and memory clock speeds. It’s filled to the brim with top-notch hardware to satisfy the most demanding users.

The board’s styling strikes a balance between industrial power and gamer-friendly flash. With the lights off, Zenith II Extreme epitomises stealth and subtlety, but once the multi-zone Aura RGB LED lighting is fired up, the board becomes a high-end showpiece. The decorative panel atop the I/O shield has a holographic Infinity Lighting motif, while a full-color LiveDash OLED display can display POST codes, critical system information or custom graphics. Aluminum ROG Armor covers most of the front of the board, and a metal backplate fortifies the board against the weight of massive heatsinks and expansion cards.

Zenith II Extreme employs an enhanced 16-power-stage VRM design, suitable for the most extreme overclocking efforts. Many components in a high-end build can get a little toasty once workloads ramp up and the bits start flowing, so Zenith II Extreme’s main VRM heatsink uses two semi-passive fans that turn

on only when the underlying component temperatures reach 60oC. To further enhance heat dissipation, a heat pipe joins the main VRM heatsink with an auxiliary heatsink under the I/O shroud. Another fan underneath the chipset heatsink draws heat away from the main M.2 slots and the TRX40 silicon itself, and its airflow also helps keep the SoC VRM cool during memory overclocking. Every one of those fans is smart enough to turn on only when they’re needed and are controlled by the Fan Xpert 4 utility.

Extensive storage capabilities are enabled by Zenith II Extreme’s five M.2 slots each using up to four lanes of PCIe 4.0, with three slots directly onboard and two coming from the exclusive DIMM.2 module. Hard drives are still the kings of sheer capacity, and Zenith II Extreme provides eight SATA ports to meet even serious mass-storage needs.

Networking is a key aspect for workstation and high-end desktop machines, because workloads on these systems often involve shuffling large chunks of data from one machine to another. Zenith II Extreme features a trio of network interfaces. An Intel® I211-AT Gigabit Ethernet controller gets the party started, but the Aquantia AQC-107 10GbE controller really fires things up, as it makes short work of multi-terabyte transfers. If wires aren’t the order of the day, then Zenith II Extreme’s future-proof connectivity with Intel AX200 Wi-Fi 6 and Bluetooth 5 support should satisfy.

Every recent improvement in USB speed has made its way into Zenith II Extreme, so the board is more than ready for the latest peripherals. The back panel contains a total of seven USB 3.2 Gen 2 ports with 10 Gbps of throughput, but the real highlight is the super-fast USB 3.2 Gen 2×2 Type-C connector with 20 Gbps of bandwidth. It also includes a pair of front-panel USB 3.2 Gen 2 connectors, four USB 3.2 Gen 1 ports and three USB 2.0 headers. 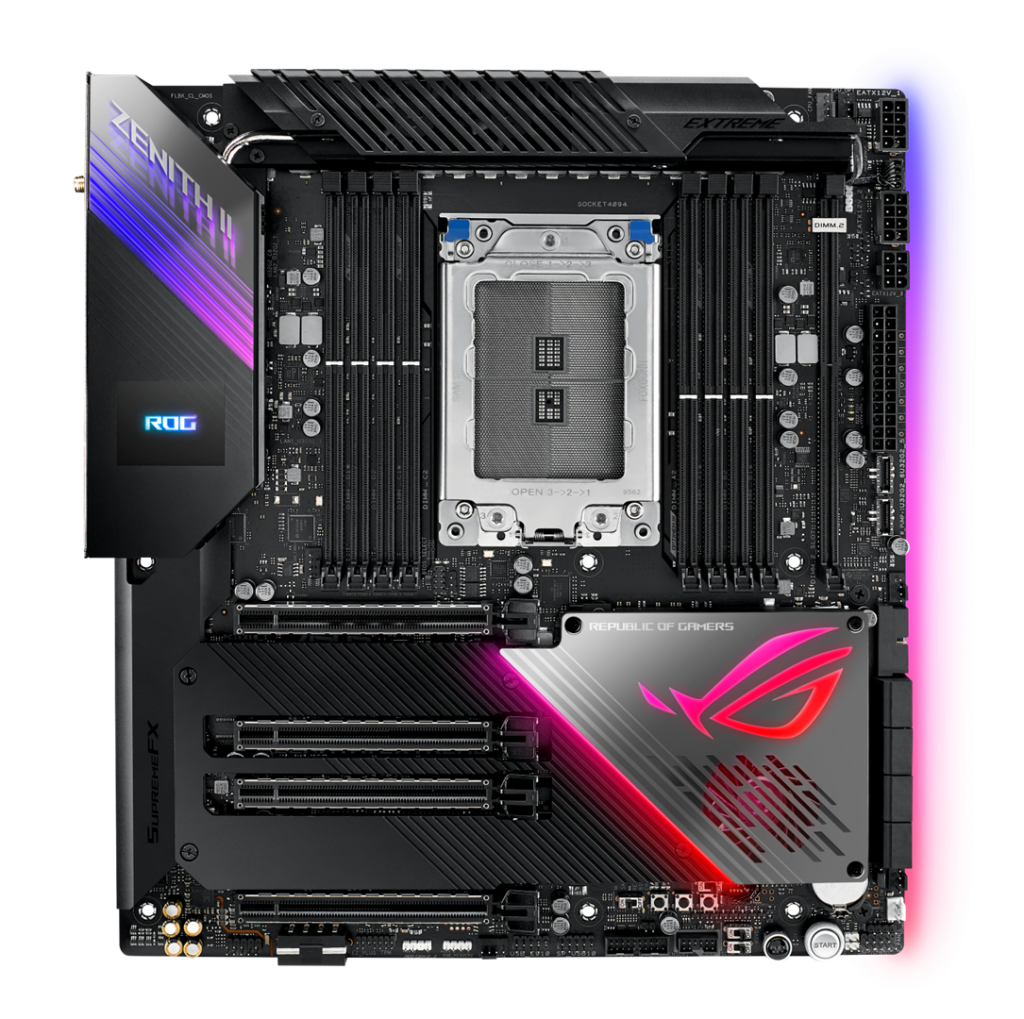 ROG Strix TRX40-E Gaming is the motherboard with all the high-end desktop credentials expected from such a standout component, and it fits all of that power into a standard ATX form factor with great customisation options, sleek cybertext aesthetics and a 1.3 inch LiveDash OLED display. Its striking angular design extends to the M.2 heatsink and audio circuitry covers, and most of the board is blacked out so that it can look its best under any shade of RGB LED lighting.

This new Strix board feeds its CPU with a 16-stage VRM with two semi-passive fans above the heatsink to keep things cool, even with demanding overlocks. ProCool II power plugs and their solid pins help ensure stable power delivery to Threadripper’s many cores and keep the connectors themselves cool under load.

The board also provides plenty of options for storage devices and peripherals. There are three M.2 sockets, each linked to four lanes of PCIe 4.0, as well as eight SATA ports that adorn the edge of the board. Around the back are eight USB 3.2 Gen 2 ports with 10 Gbps of bandwidth, including one Type- 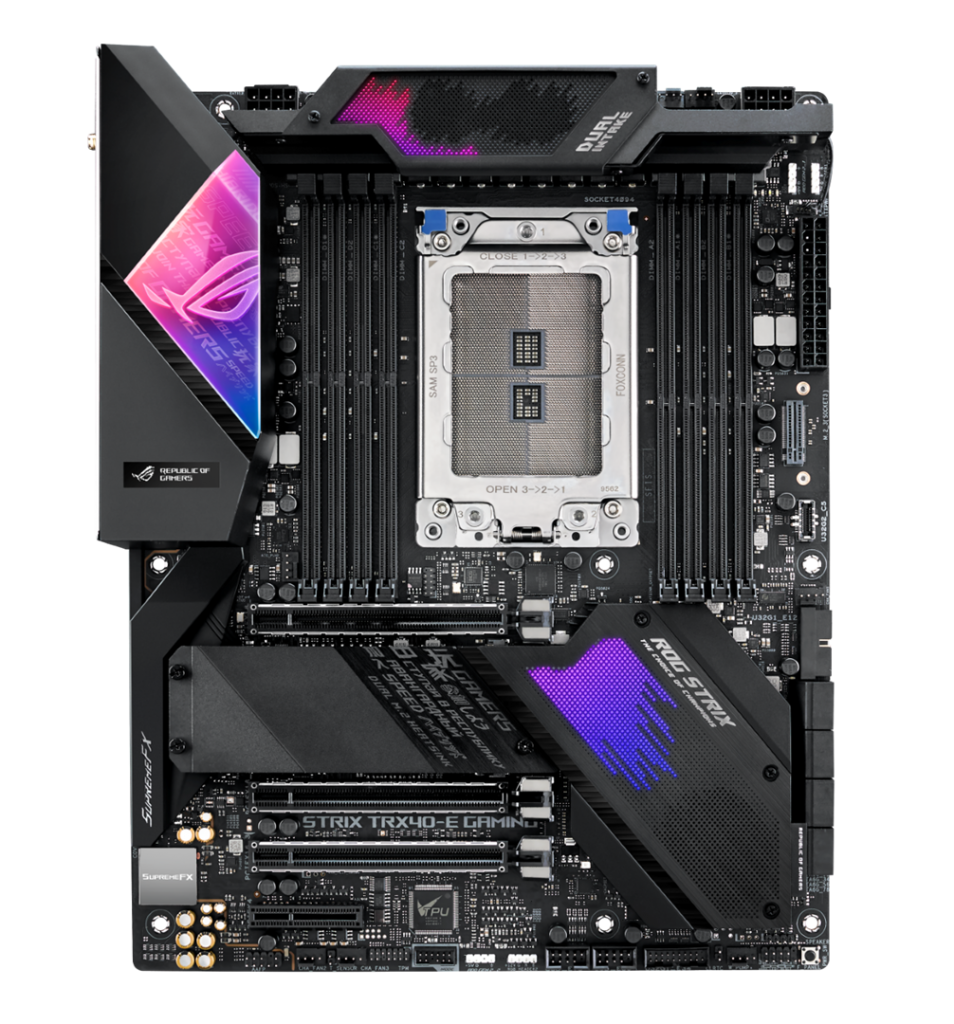 Prime TRX40-Pro is a reliable foundation for any enthusiast or professional with creative workloads like video editing and 3D rendering that benefit from the power of many-core CPUs. In addition to contributing to the board’s clean and futuristic design, its brushed-aluminum VRM heatsink draws heat away from a 16-stage power-delivery subsystem comprising Infineon TDA21462 integrated power stages paired with premium chokes and components. Every single expansion slot comes loaded with the performance of PCIe 4.0, too: three PCIe x16 ASUS SafeSlots grace the main portion of the board, and they’re poised to run all-out in an x16/x16/x16 configuration.

The USB port selection on the back panel includes three USB 3.2 Gen 2 Type-A connectors and a reversible USB 3.2 Gen 2 Type-C port to provide up to 10 Gbps for connecting fast external storage, audio interfaces, dedicated video editing controllers and more. Prime TRX40-Pro also has a full set of fan and liquid-cooling headers controllable with our Fan Xpert 4 utility. The board also includes an E-key M.2 2230 socket for those who wish to add a Wi-Fi module. Wired connectivity comes from a Gigabit Ethernet port backed by an Intel I211-AT chip. 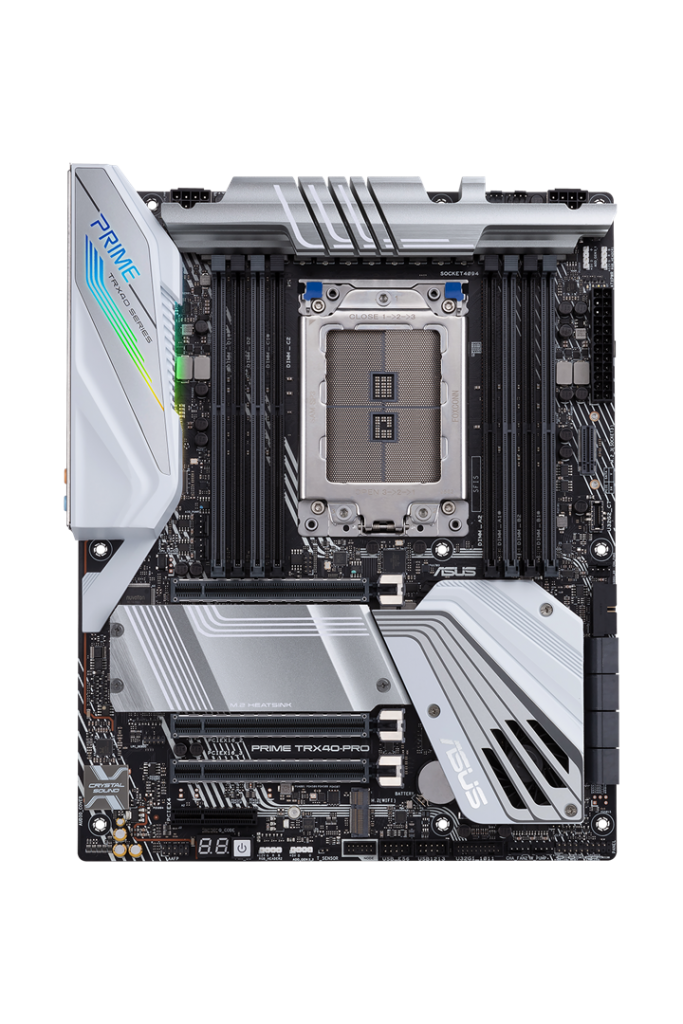 ASUS and ASUS ROG TRX40 motherboards will be available from November in the UK.