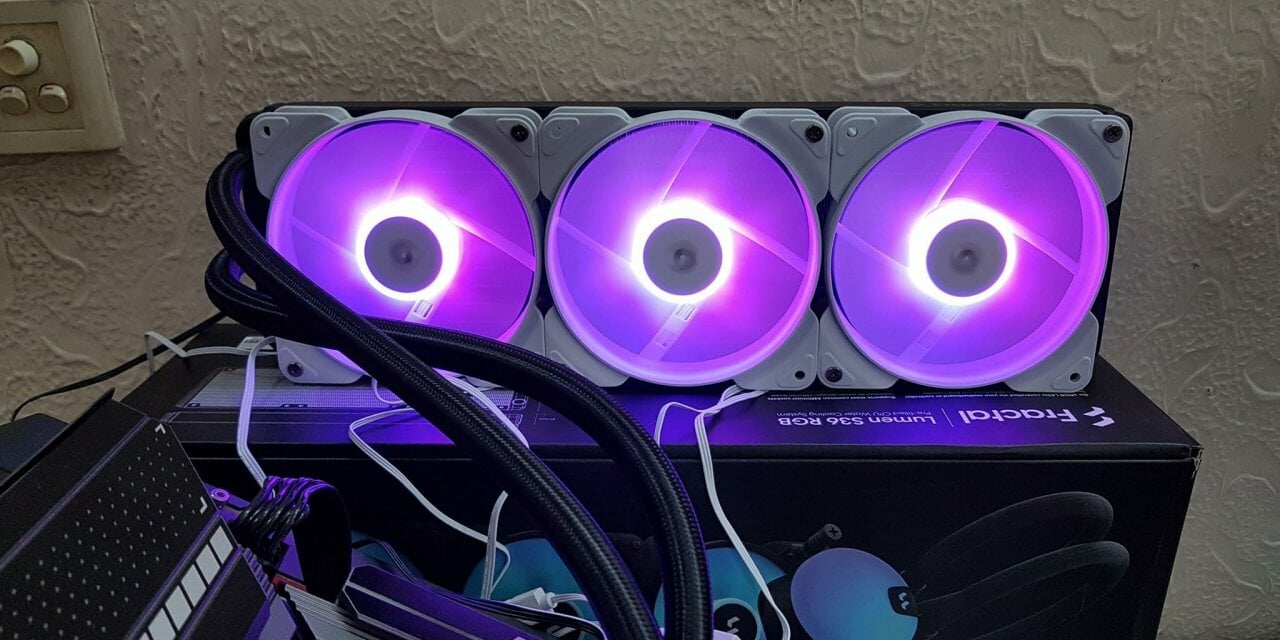 Fractal Design has released their new series of fans named Aspect. Aspect series fans bring a new design element and some key changes like aerodynamic stator struts, trip wire technology, and rifle bearings. These fans utilize the industry’s standard ARGB connectors which can be daisy-chained for neat and simple cable management. These fans are available in 120mm and 140mm variants which are further categorized in black and RGB fans as well as white and black colors. We will be taking a look at Aspect 12 White RGB fans in this content. 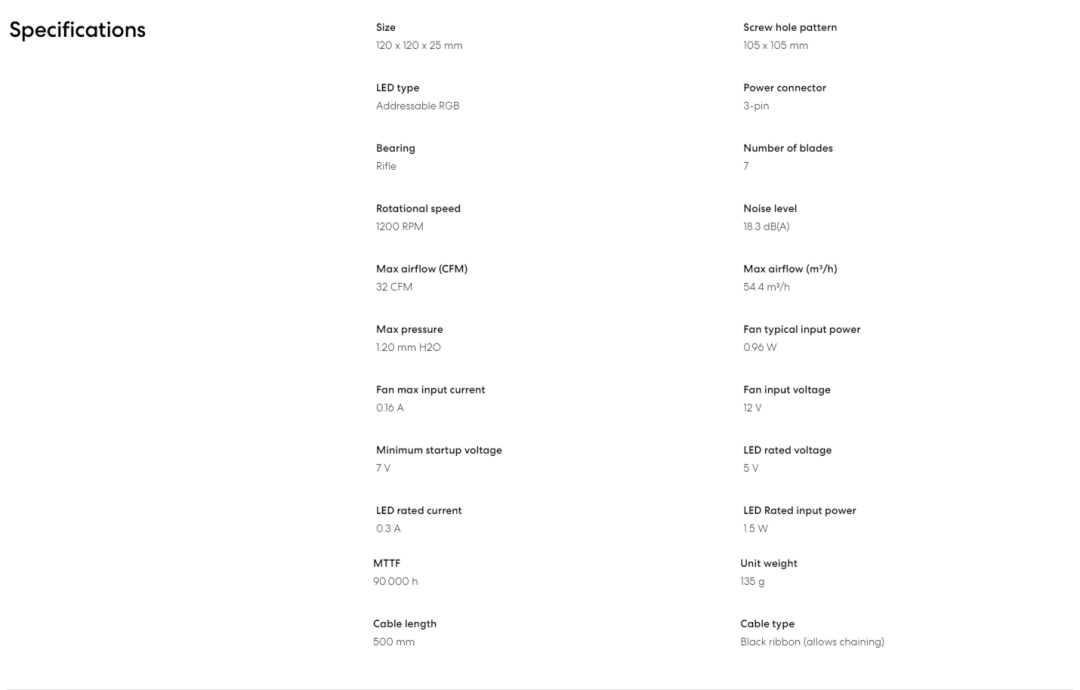 A single fan is shipped inside a black and white color paperboard packing box. 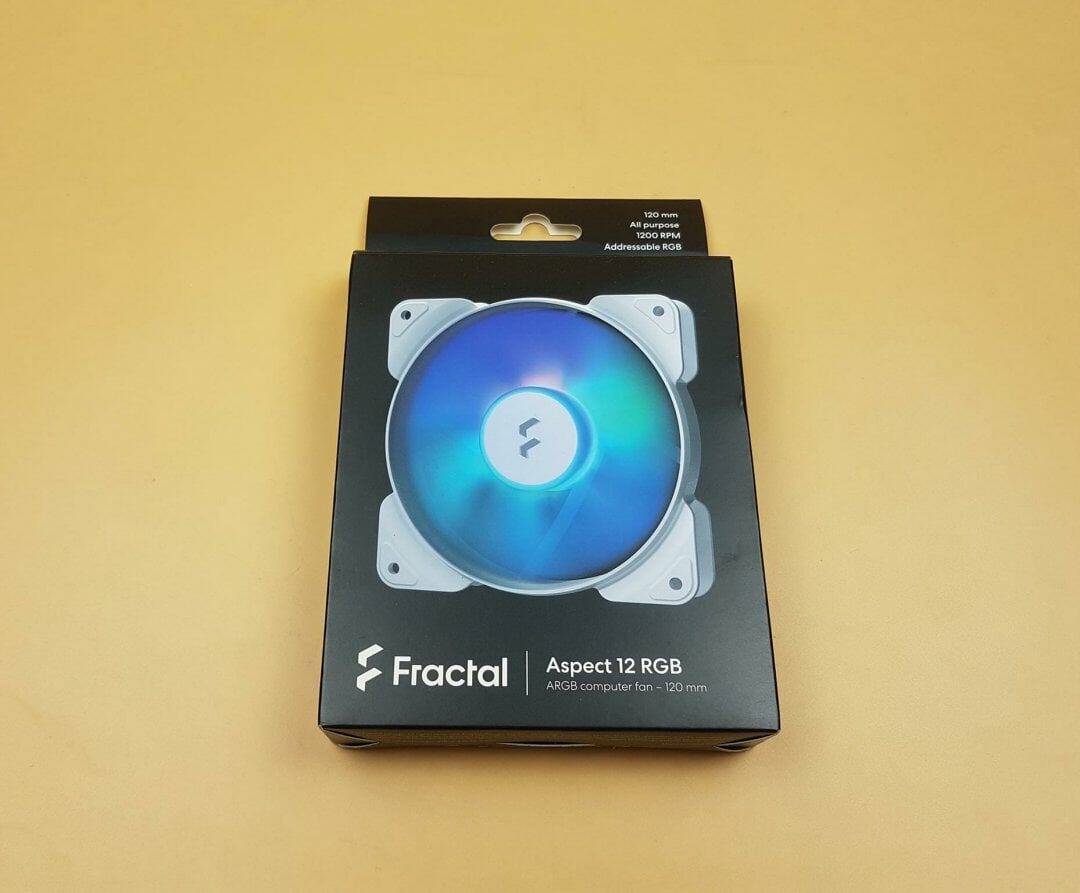 This is an ARGB computer fan in 120mm size. 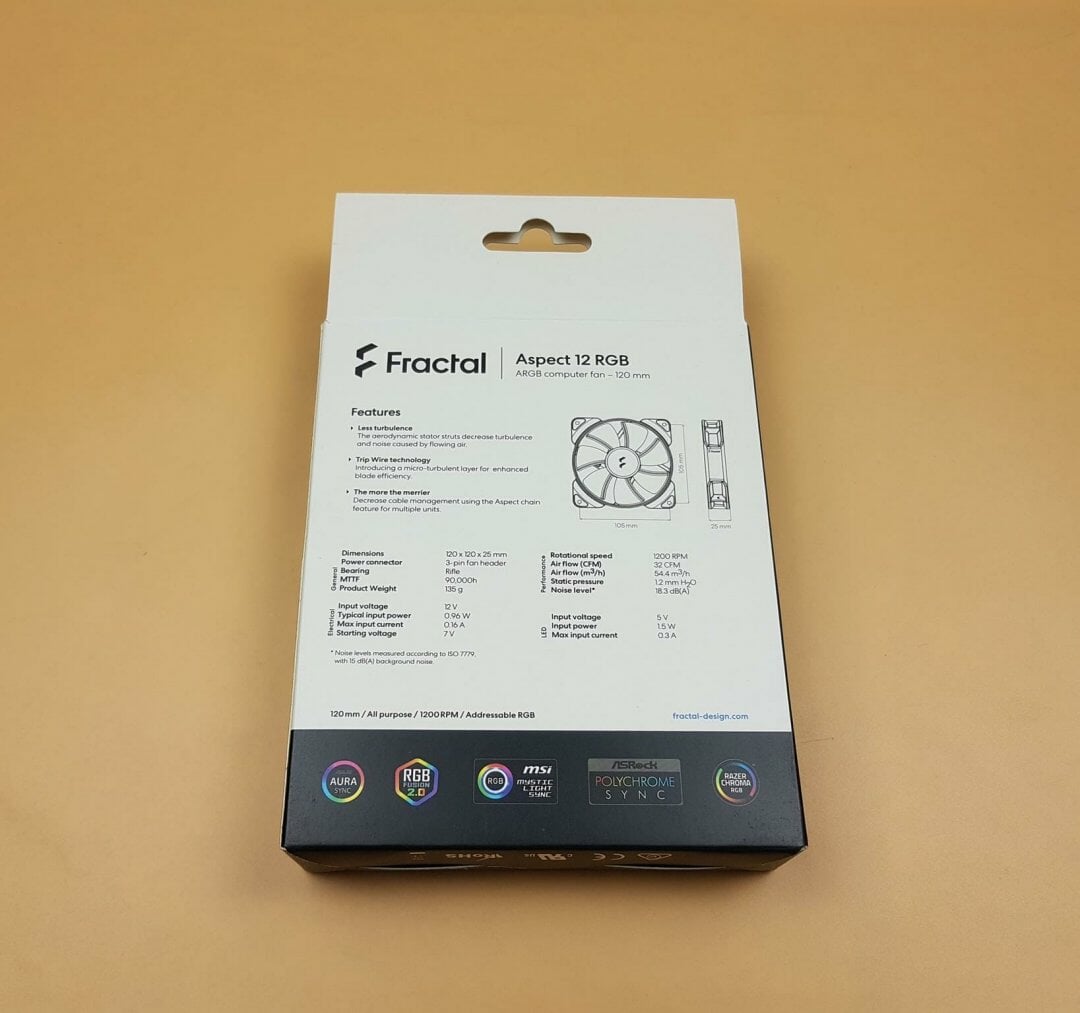 Features of the fan include:

The specifications of the fan are printed as well. 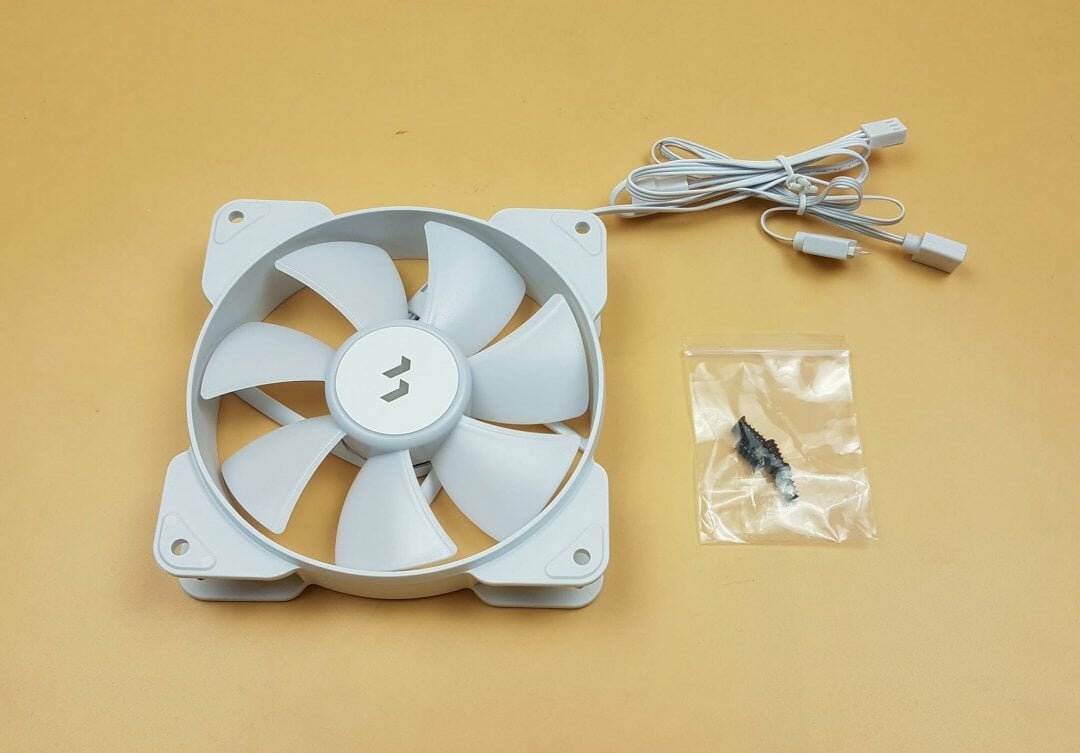 Fractal has provided an Aspect fan and 4x self-tapping screws. 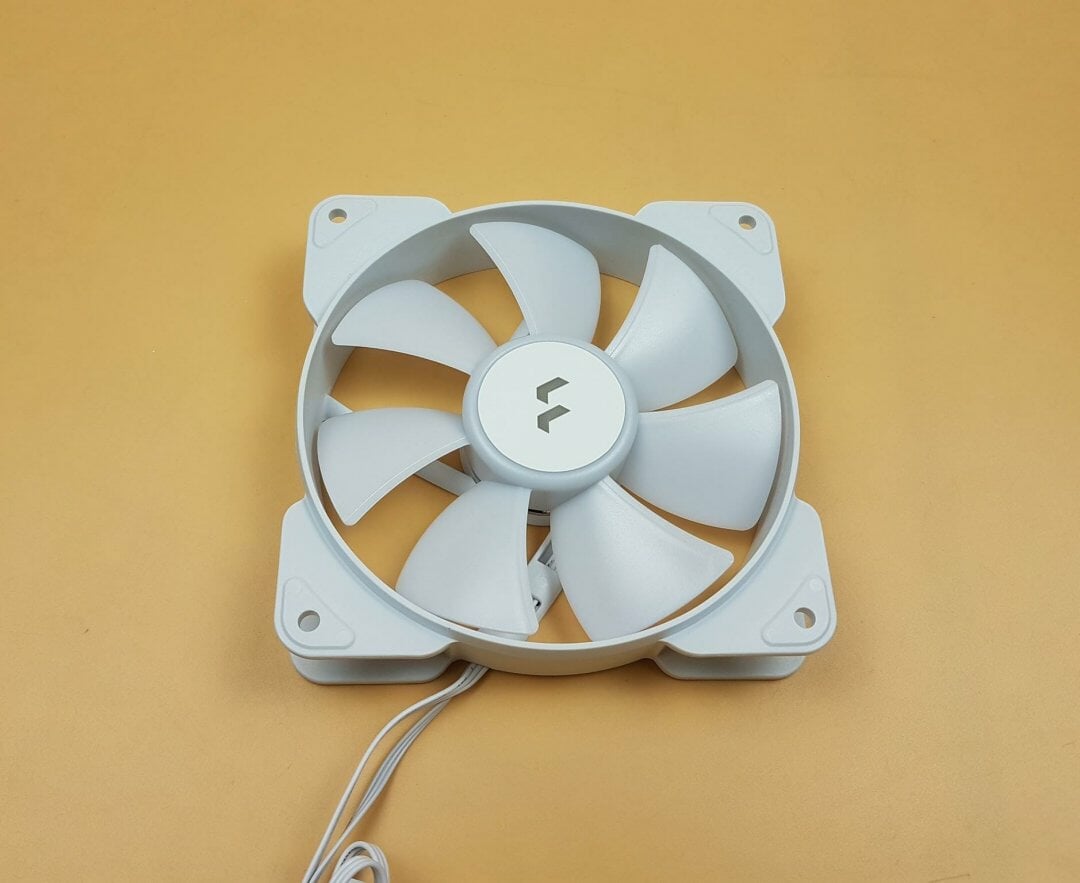 The fan has a dimension of 120x120x25mm. We have a screw hole pattern of 105x105mm. The Aspect 12 RGB White fan has a white color ring design frame. There are 7 blades. The diameter of the center is relatively larger than the standard 120mm fans which is obvious as it houses 6x ARGB LEDs. The blades are opaque white to transfuse some vivid RGB lighting. The center has a Fractal Design branding. 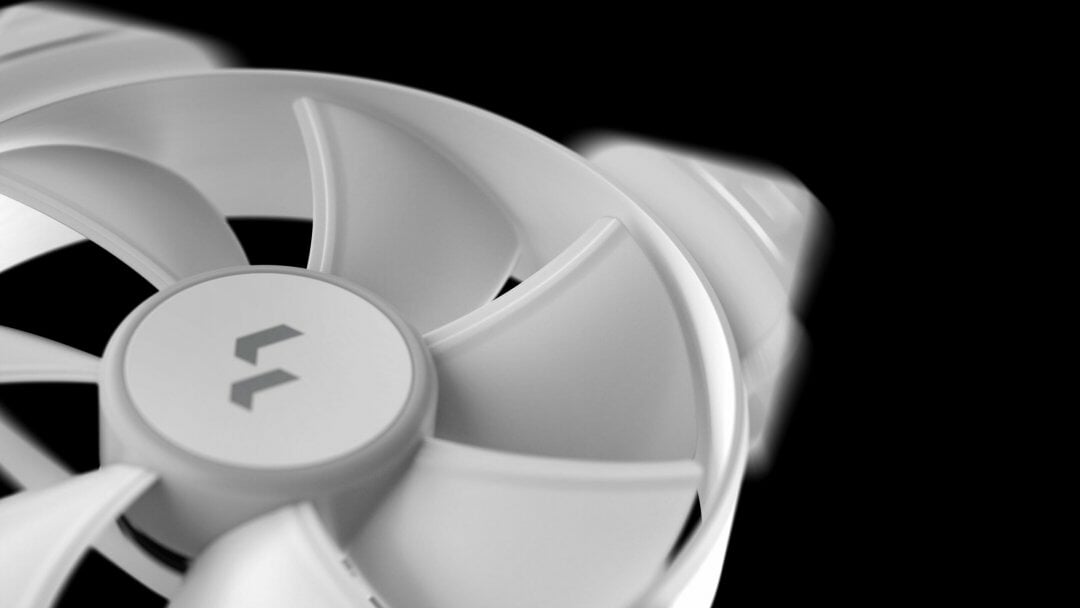 The Aspect series fans have Trip Wire Technology design. Fractal has introduced a micro-turbulent layer on the blades which enhances the efficiency of the blades. 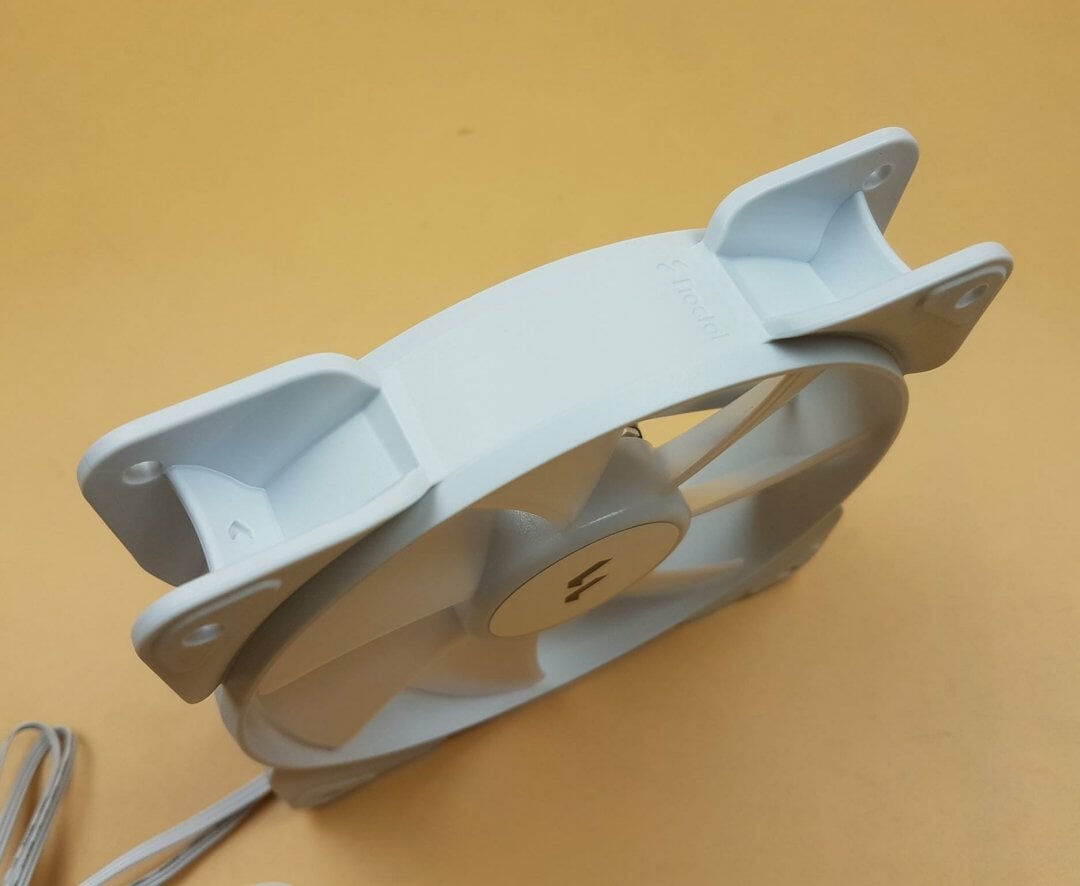 There is a Fractal branding on the side of the frame of the fan. Looking closely you will also spot an arrow mark inside the mounting corner showing the direction of airflow. 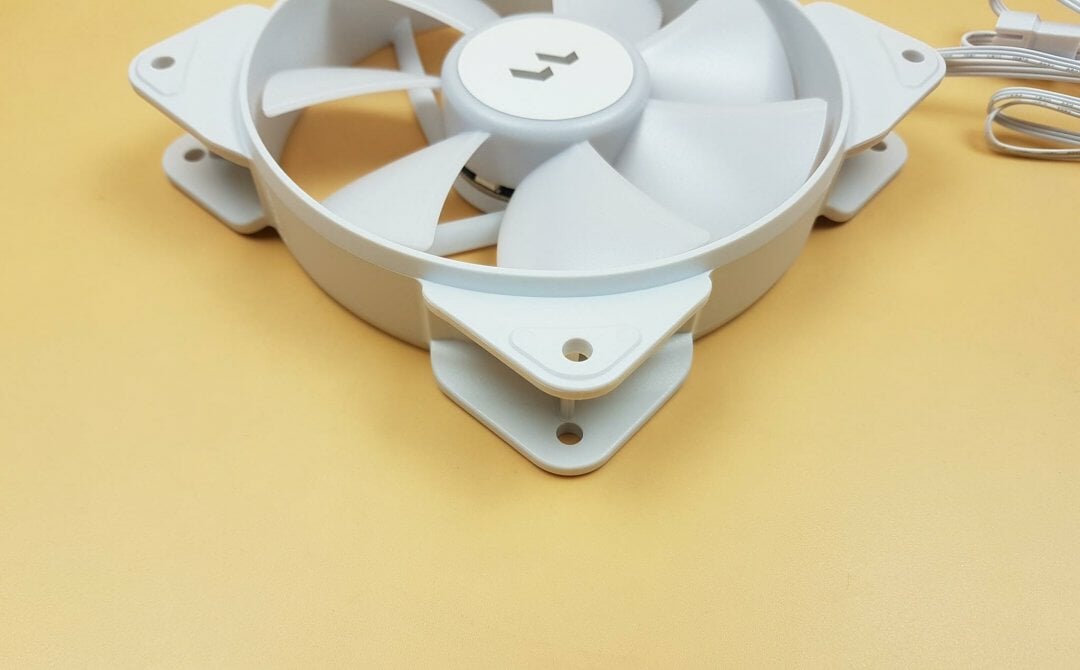 Each mounting corner has a cut-to-design anti-vibration pad which happens to be in the white color. Everything about these fans is white in color. 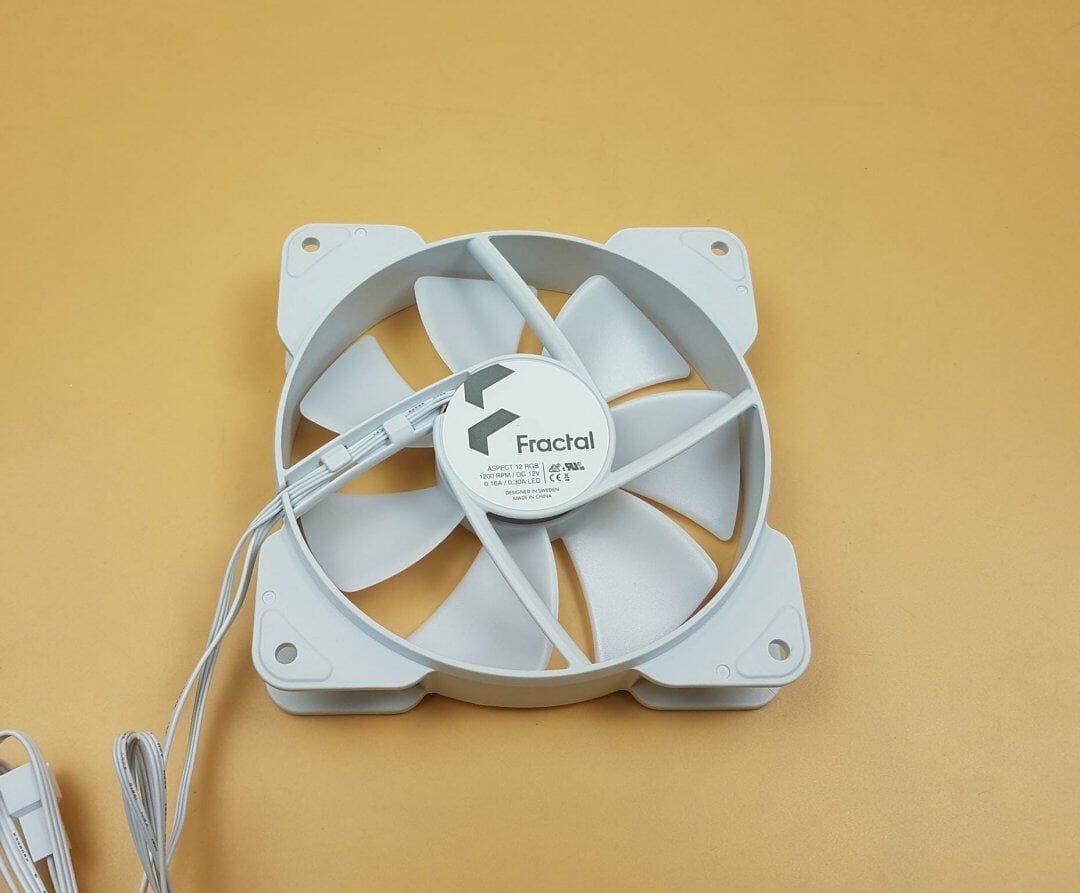 There is a 4-arms assembly on the backside holding the fan motor and blades to the frame. One of the arms has an inset and is wider. The wires are routed through this widened inset area. Two catchers in opposite direction stop the wires from falling. There is a Fractal branded sticker in the center. The fan is designed in Sweden and made in China. These fans are using Rifle Bearings. These are more efficient than standard sleeve bearings and have an MTTF of 90,000 hours. 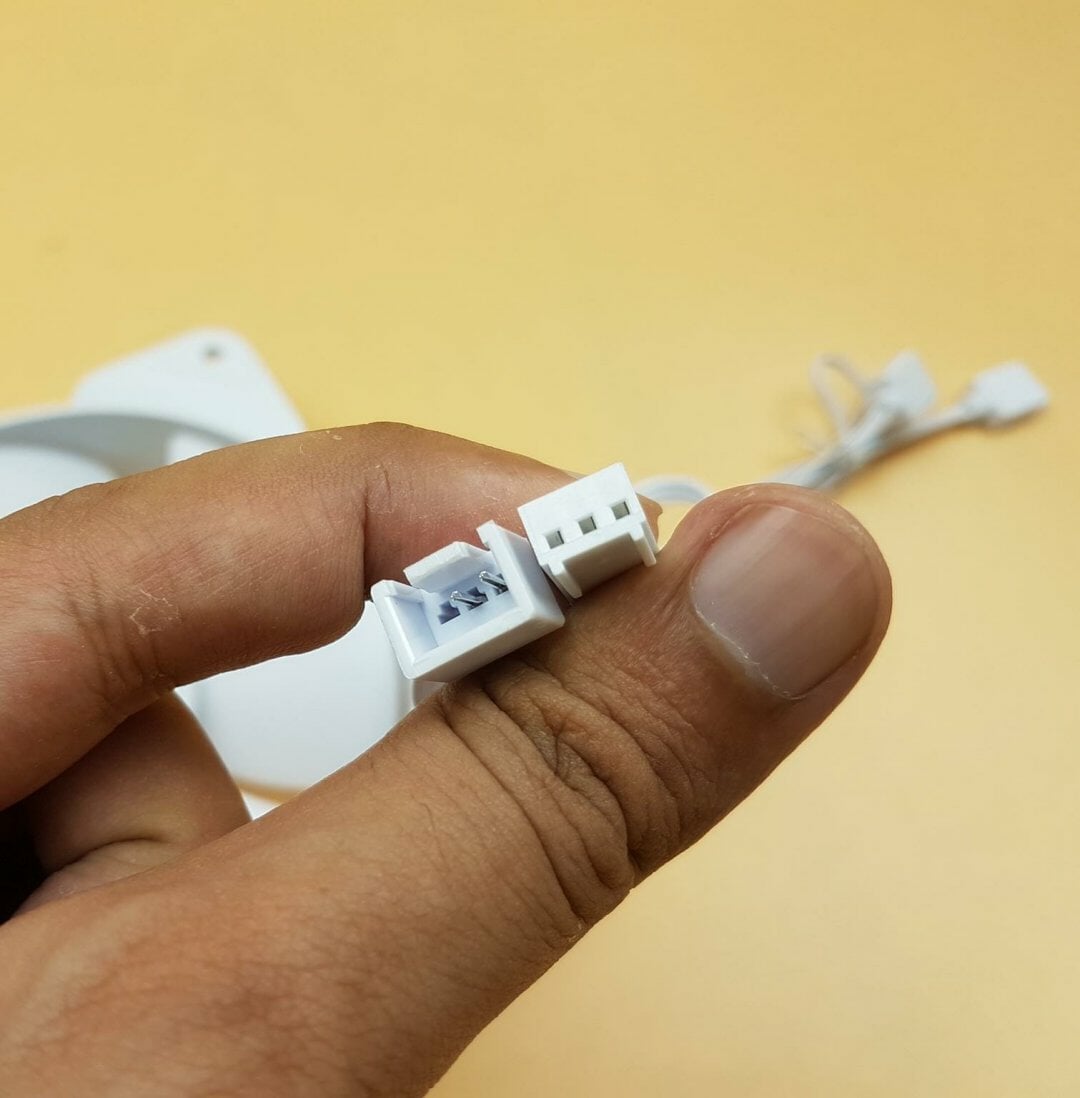 The fan is not PWM powered. It has a 3-pin power connector in white color. There is also a 2-pin socket in the white color. The provision of a socket would allow the user to daisy chain the fans. 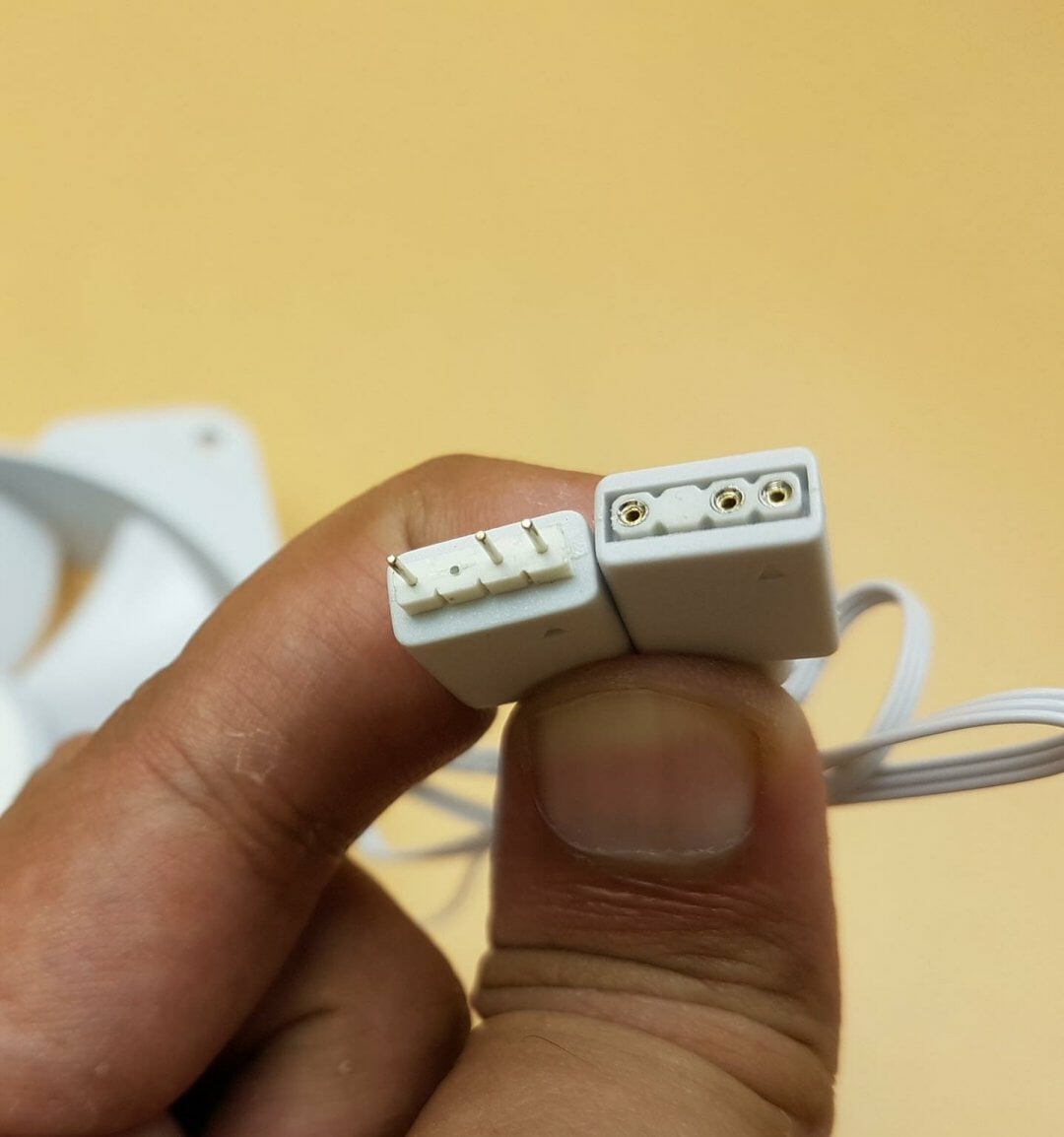 The second cable coming out of the fan is a 3-pin 5V ARGB cable with a 3-pin connector as well as a header. Again, this design would allow the user to daisy chain the fans for neat cable management. This would also remove the requirement of a dedicated RGB controller hub. The use of standard connectors would make these fans compatible with any control source using a 3-pin, 5V ARGB interface.

The RGB lighting on these give one good AURA and I am digging the lighting. 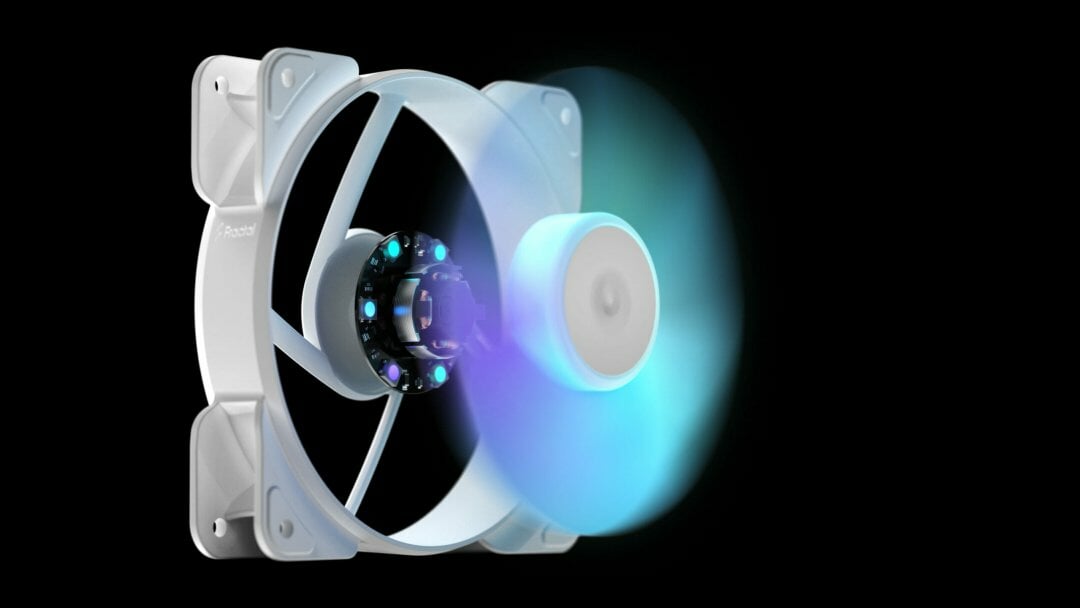 The hub has 6x ARGB LEDs to create some vivid visuals. Here are a few pictures of these fans in action:

For comparison, we have tested the stock Aspect 12 RGB PWM fans on the Lumen S36 RGB cooler and compared the performance against the Aspect 12 RGB (Non-PWM) white fan. 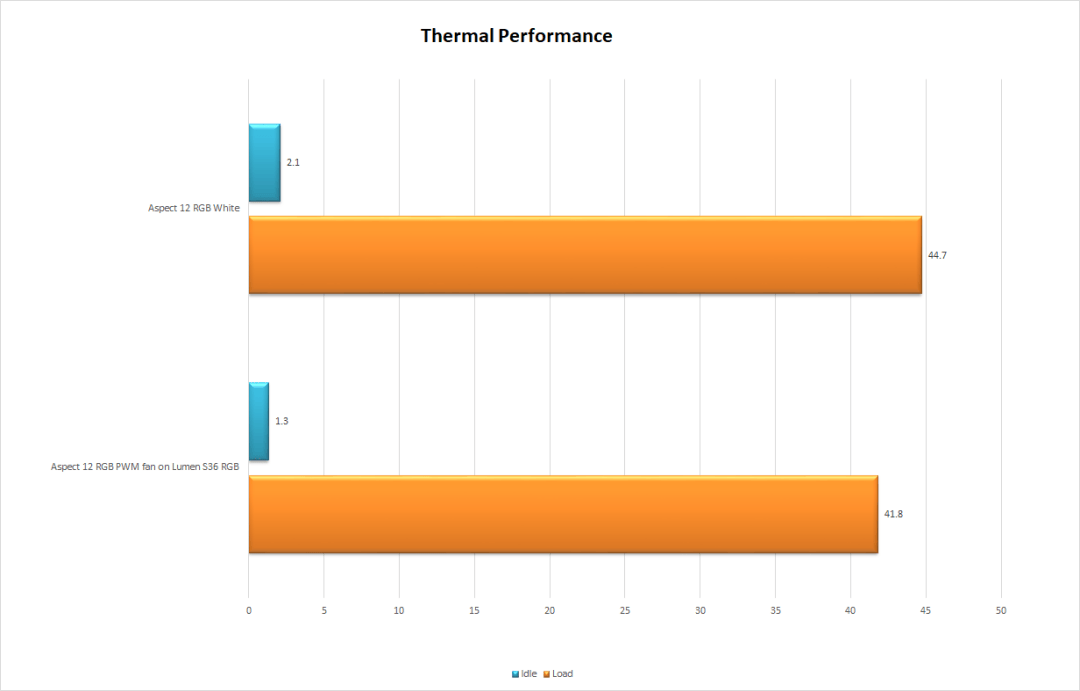 There is roughly a difference of 2.9°C between the Aspect 12 RGB White fans and Aspect 12 RGB PWM fans which come with Lumen S36 RGB cooler. This is a nice performance given the low airflow and static pressure ratings. 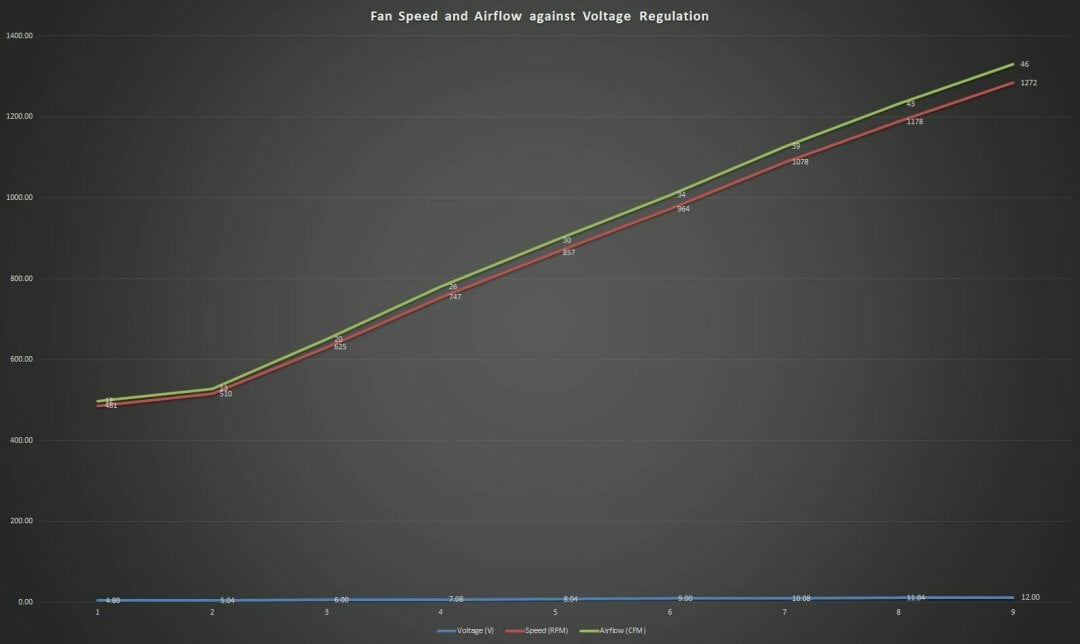 The above plotting is showing the graph of three metrics (Voltage Regulation, Speed, and Airflow) of the values shown in the table above.

The fans at 100% of their speed were doing approximately 45 dB(A) at an ambient of 33 dBA. This is too good an acoustic performance from these fans.

Aspect is a new series of fans from the Fractal Design complementing the Dynamic and Prisma series fans. These fans feature aerodynamic stator struts decreasing the air turbulence, tripwire technology to enhance the blades’ efficiency, and rifle bearings giving MTTF of 90,000 hours. These fans are available in 120mm and 140mm versions. Each size is available in PWM and non-PWM variants as well as in RGB and non-RGB variants. The white edition is only available in the non-PWM option. Hoping to see the PWM version of the white color fans as well!

We have taken a spin on beautiful Aspect 12 RGB white color fans. This fan has a 3-pin connector to power the motor of the fan. One key design is the provision of a connector along with the socket allowing the user to daisy chain the fans easily reducing the need for a splitter cable or hub. The same goes for the ARGB cables which have a standard 3-pin connector as well header allowing the user to daisy chain these cables as well reducing the need for the dedicated RGB control box.

The Aspect 12 RGB white has a dimension of 120x120x25mm. The rotational speed is 1200 RPM with 32 CFM being the maximum airflow at 12VDC. The noise level is rated at 18.3 dB(A). The static pressure rating is 1.2mmH₂O. Each fan has 7 opaque white color blades for a better transfusion of the RGB lighting. The hub packs six ARGB LEDs. The trailing edges of the blades have micro-turbulence stators to reduce air turbulence and enhance efficiency.

The frame has a ring design and mounting corners have cut-to-size anti-vibration pads which are also in the white color. The fan’s RGB lighting is compatible with ASUS AURA SYNC, GIGABYTE RGB FUSION 2.0, MSI MYSTIC LIGHT SYNC, ASRock POLYCHROME SYNC, and RAZER CHROMA RGB. The use of standard connectors makes these fans compatible with the majority of the motherboards and external controllers. We have tested the lighting on the MSI MAG Z490 TOMAHAWK motherboard using Mystic Light Sync App and the fans were working perfectly fine with the app and were responding to the change in the color and mode. I appreciate the good lighting effect on these fans.

The Fractal Design Aspect 12 RGB White fans are listed at £10.99 on SCAN UK at the time of the review. The fan packs a mediocre rating when it comes to airflow and static pressure. As such they are better suited for case ventilation. We put them to thermal testing on the Fractal Design Lumen S36 RGB cooler which comes with powerful Aspect 12 RGB PWM high-performance fans to tame the temperatures on Intel i7 10700k with all cores set to 4.7GHz at 1.250V under synthetic load of AIDA64 stress run. There was a difference of 2.9°C between the Aspect 12 RGB white fans and Lumen S36 RGB’s stock fans. This is not a shabby performance by any means given the fact that the Aspect 12 RGB white fans have much lower airflow and static pressure ratings.

The Fractal Design Aspect 12 RGB White fans offer a nice blend of aesthetics, decent performance, and better acoustic in this price range making them a better candidate for your PC case ventilation particularly if the PC case is in white color and these fans come recommended by us.

Thanks to the Fractal Design for sending the Aspect 12 RGB White fans for testing. 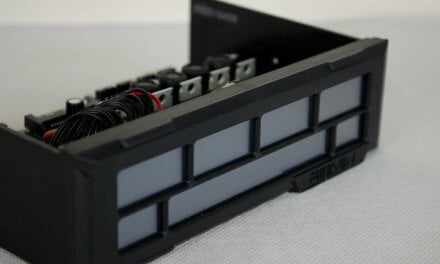 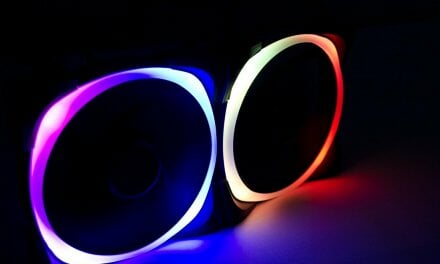 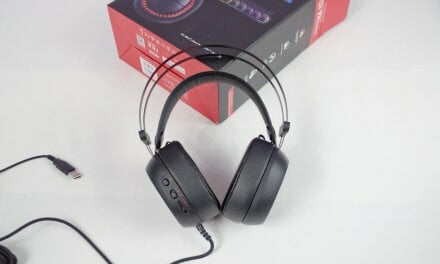 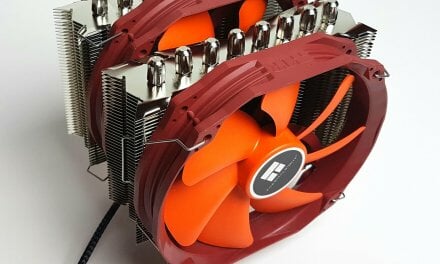