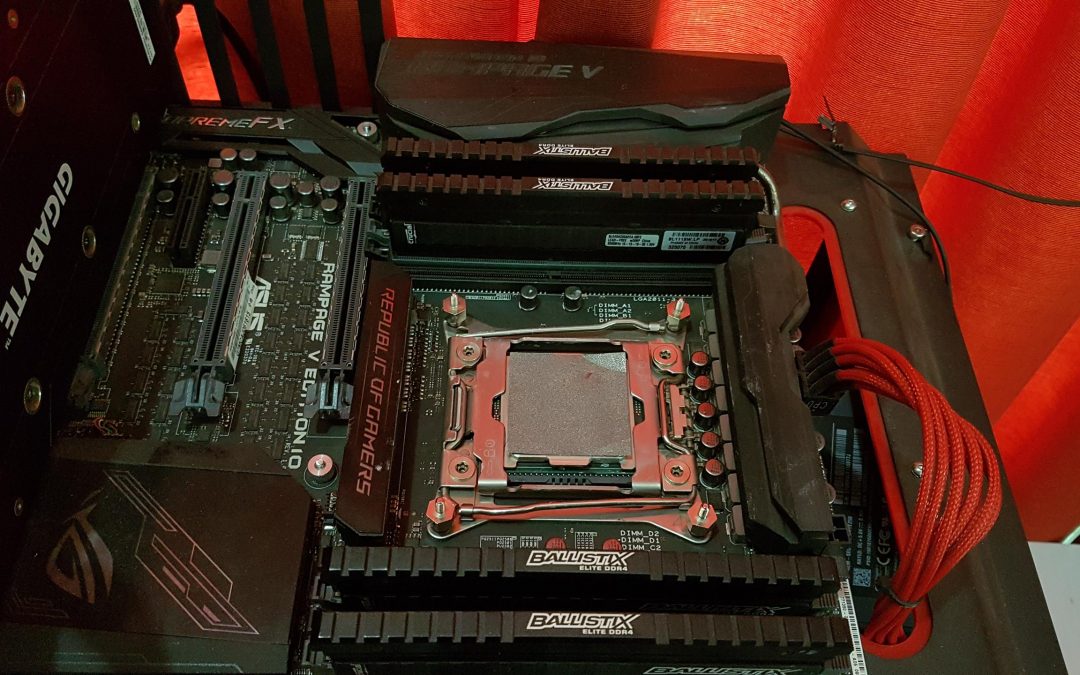 Recently, Innovation Cooling has introduced their new thermal pads titled IC Graphite Thermal pads and are available in two sizes; 30x30mm and 40x40mm. We decided to buy one and use on our test bench for the review hence ended up buying 40x40mm IC Graphite Thermal Pad from Amazon. The IC Graphite Thermal Pad is an alternative thermal interface solution for the CPUs, GPUs, and Playstations. The company is claiming that it is not only high performing solution but also a reusable one. We were interested to find out how good this solution is as compared to the traditional thermal pastes and that if it can sustain multiple uses. It is time to find out.

The thermal pad comes inside a plastic container in white color. The front side of the box has a raised portion at the bottom inside which the thermal pad is placed inside a plastic sheet. There is a blue color leaflet placed inside the main box with the company’s name printed on the top followed by the name of the item. Salient features of the item are printed in the bullet format. Company’s website address is printed on the bottom. The backside of the box has a serial no sticker pasted on it which is also acting as a seal to hold and secure the front cover. The back side of the leaflet has the salient features of the pad printed in the bullet format along with the application method. There is nothing else than a thermal pad itself in the box which is understandable given the type and size of the item. 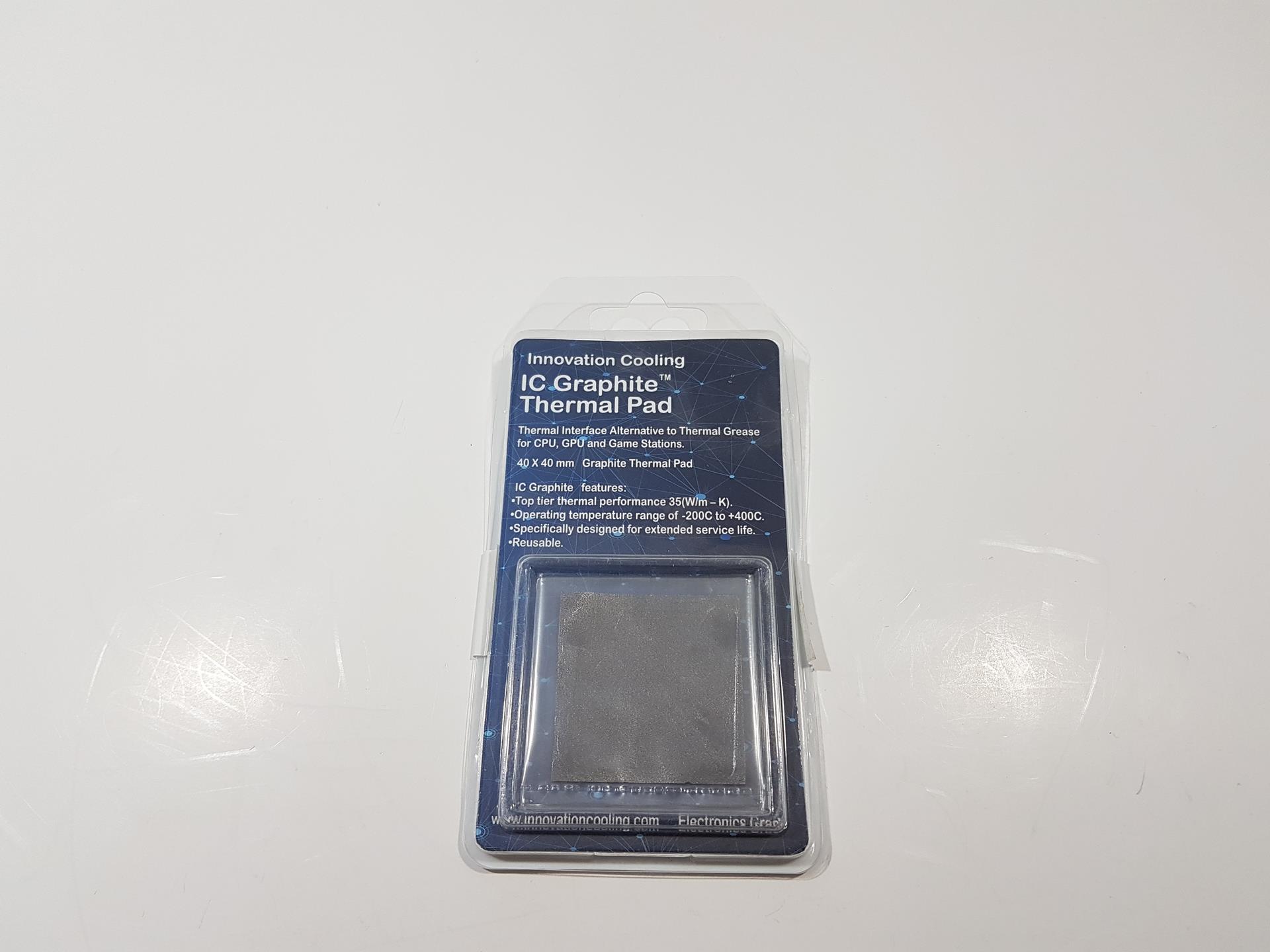 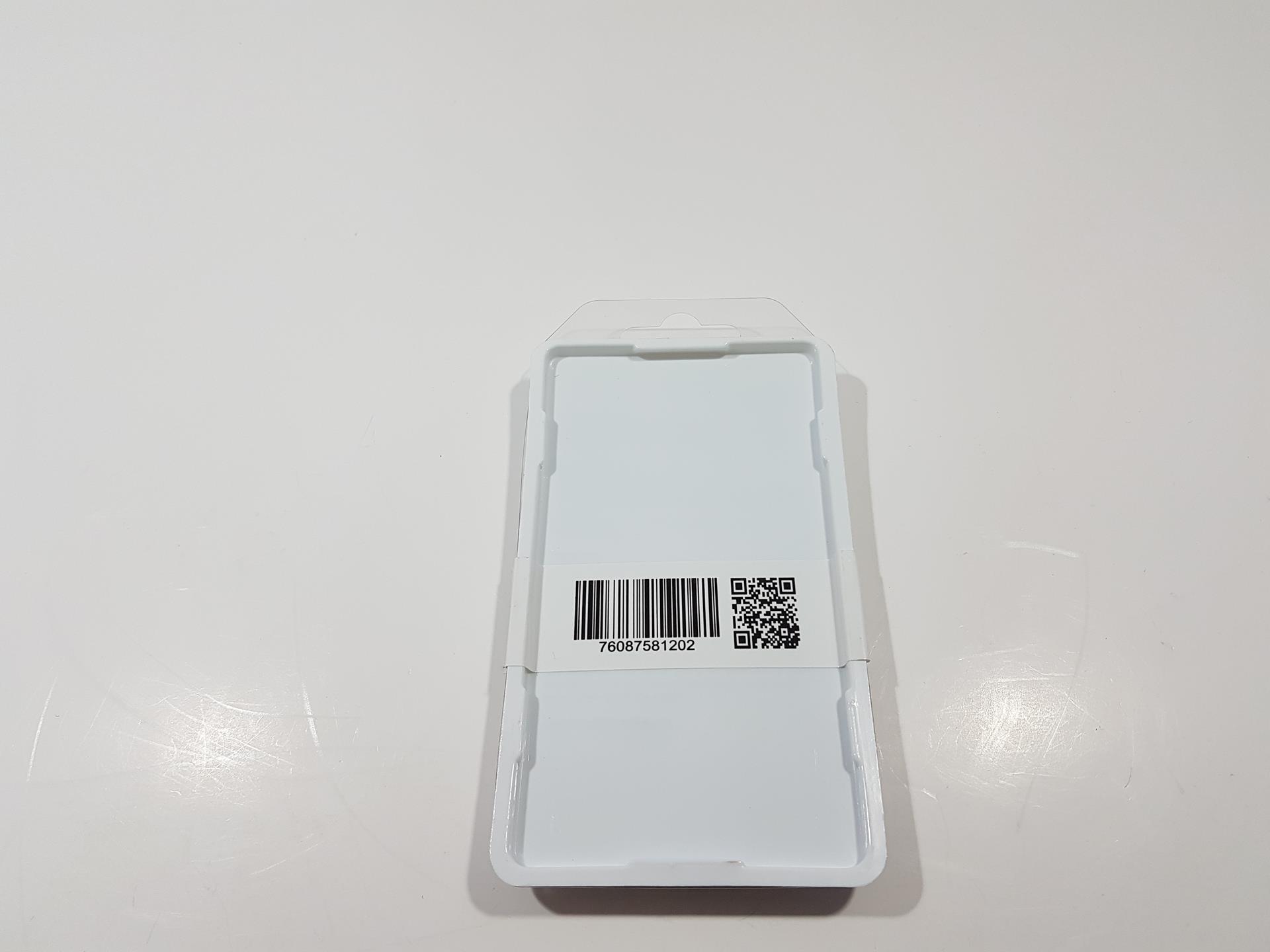 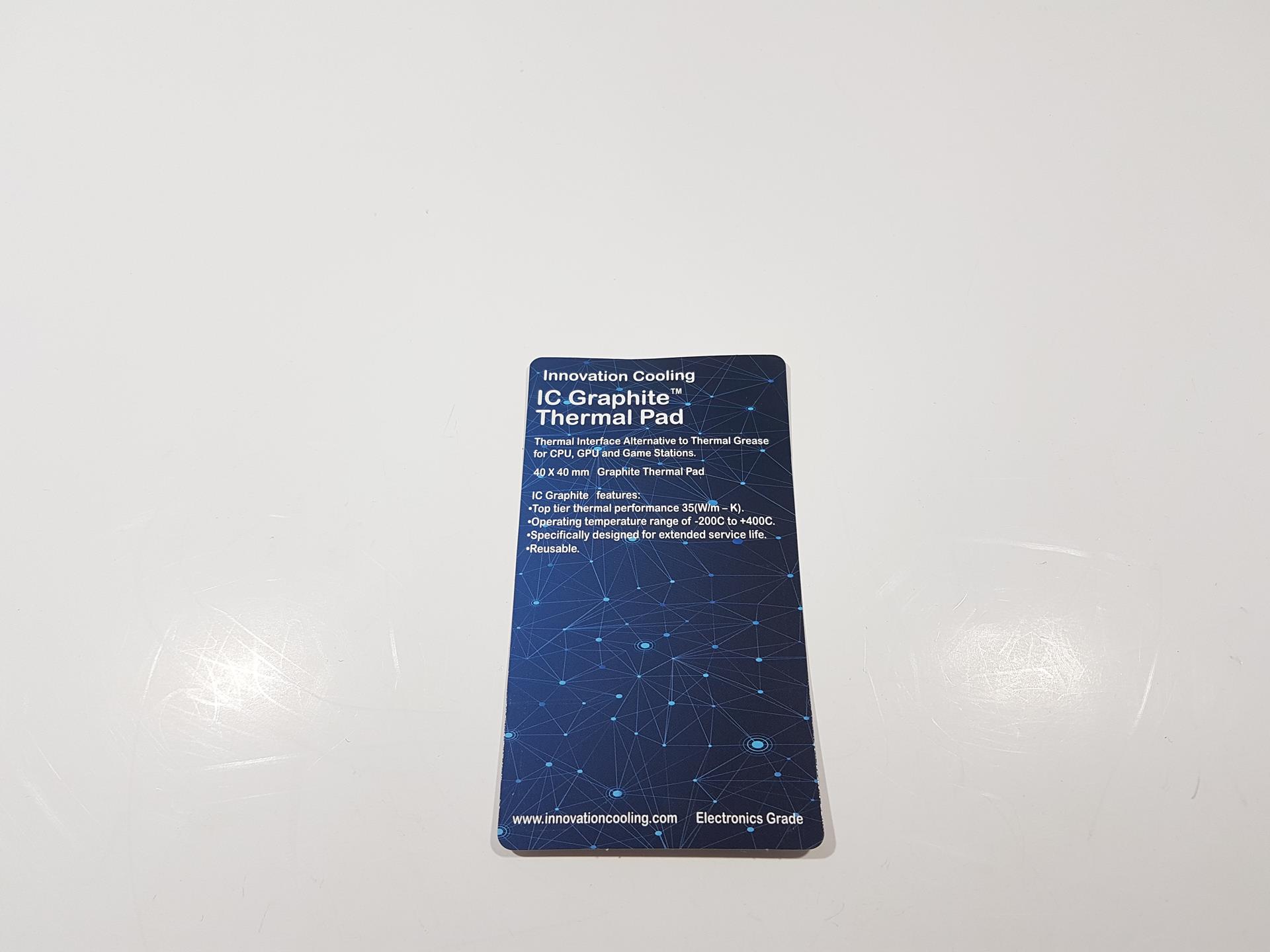 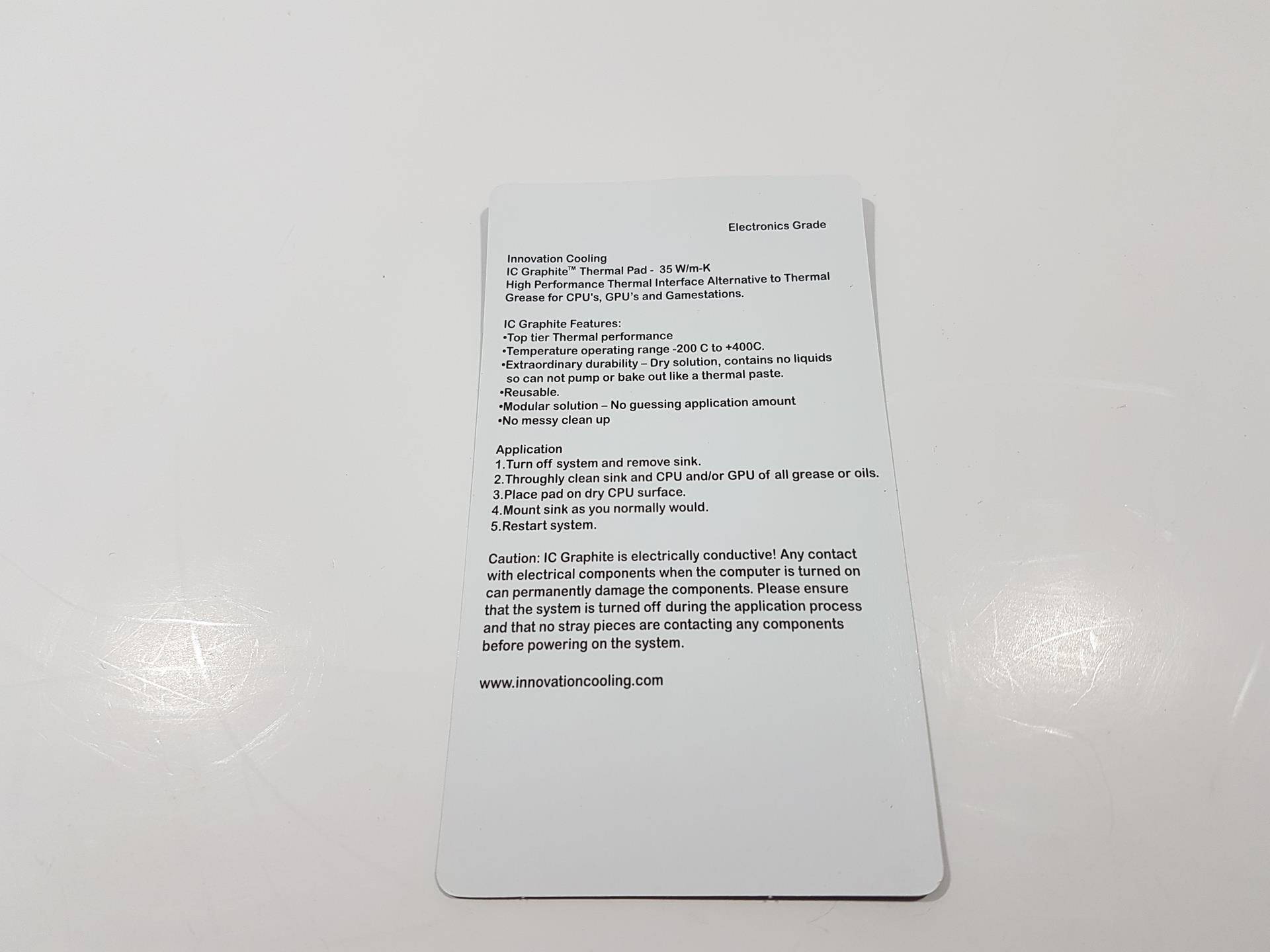 Thermal interface solution helps in thermal conductivity from the heat source to the cooling solution. The surface of the CPU IHS is not that flat and many times the same is the case with the base of the cooler. Ideally, one would simply place the cooler on the CPU and call it a day but like I said it is an ideal solution that is far from reality. In reality, there are micro gaps between two surfaces that would hamper the thermal conductivity. One can leave that gap without filling it properly with the thermal interface material in which case it is likely that air will fill those gaps but the air has the poor thermal conductivity which is 0.0209 W/m.K at 20°C. [Source] hence it is not a good solution. To remedy this effect, manufacturers provide thermal pastes, greases, and pads. The idea is to apply enough paste so that it fills the micro gaps between the contacting surfaces (CPU IHS and cooler’s base) to smoothen the thermal conductivity. There are multiple solutions available in the market as described above but most of the commonly used and popular solution is the thermal paste, for example, Noctua NT-H1, Arctic Silver %, MX-4, IC Diamond, Maker Nano Ultra from Cooler Master, Thermal Grizzly, Gelid Solutions GC Extreme to name only a few among the humongous list of available solutions. Each of this paste uses a different material having different thermal conductivity. The IC Graphite Thermal Pad is rated at 35 W/m.k. Thermal conductivity is expressed in k value where W/m.k is read as Watts per meter-kelvin. It specifies the rate of heat transfer in any homogeneous material. If a material has a k value of 1, it means a 1m cube of material will transfer heat at a rate of 1 watt for every degree of temperature difference between opposite faces. The k value is expressed as 1 W/m.K. The lower this value is, the less heat the material will transfer. [Source] For thermal conductive requirements we need higher k value and for thermal resistivity requirements we need lower k values

The Graphite is a natural crystalline allotropic form of the Carbon deriving its name from the Greek word “graphein”, to write. The material is generally greyish black, opaque and has a lustrous black sheen. It is unique in that it has properties of both a metal and a nonmetal. It is flexible but not elastic, has a high thermal and electrical conductivity. [Source] The Graphite has thermal conductivity range of 25-470 W/m.k. Given the 35 W/m.k rating of the IC Graphite Thermal Pad, we are thrilled to test it out and compare with the Noctua NT-H1. Unfortunately, the thermal conductivity or k value of the NT-H1 is not available with us though we have written to the Noctua if they could provide us with the information.

It is highly imperative that you make sure to get rid of any residue on the CPU and the cooler for effective thermal conductivity.

Is there any downside to it? Yes, there are some Cons about it. 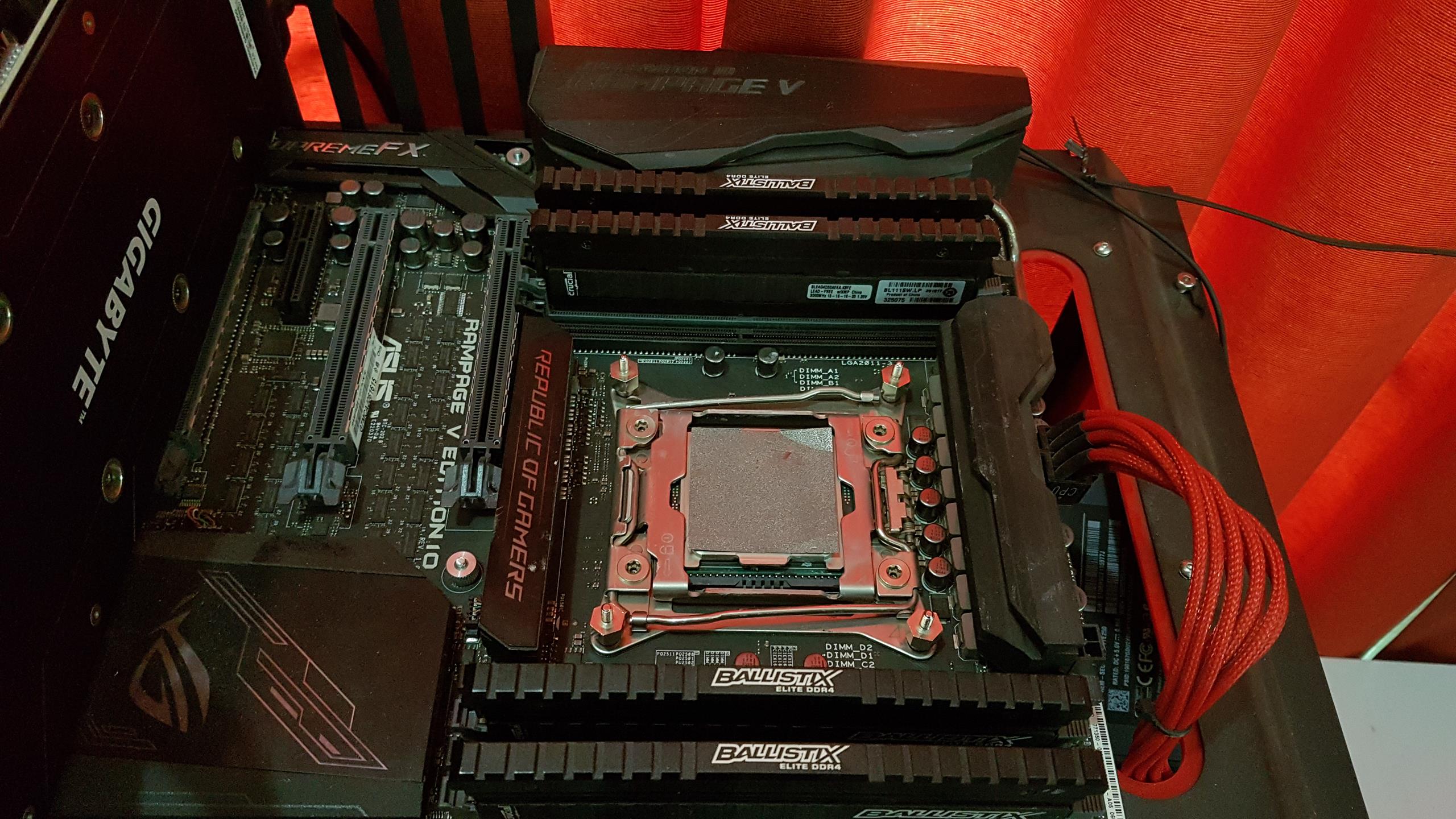 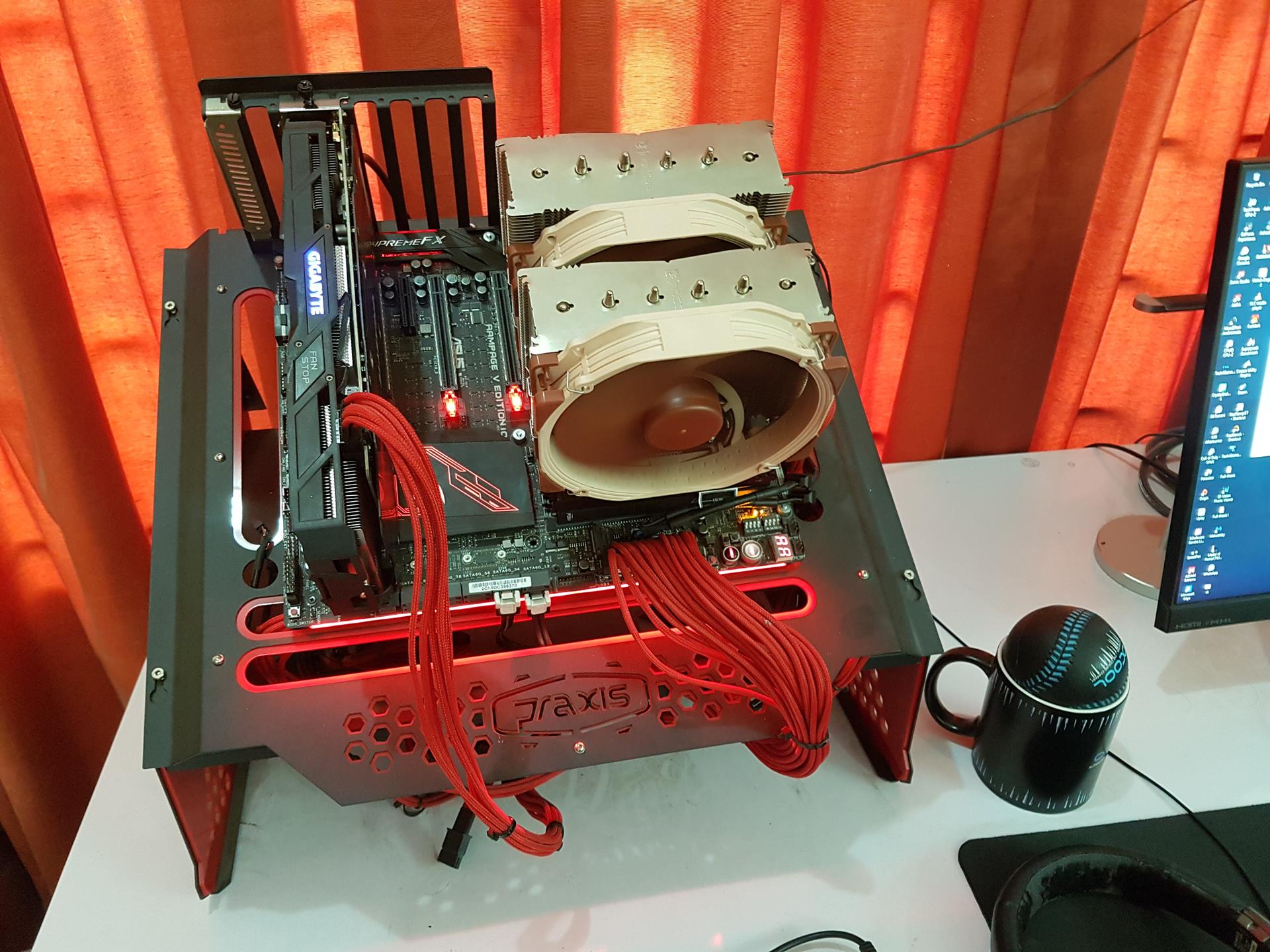 When it comes to the testing of the Innovation Cooling’s IC Graphite Thermal Pad there are two parameters that we need to take into consideration: Thermal Conductivity and Reusability. One time testing will not speak for the reusability part but would suffice for the thermal conductivity. Hence, we decided to give it a spin for 15 times testing. Each time the cooler was removed, the pad was reversed, and the cooler was installed again. We did not immediately go for the stress test rather put the system to our regular use like creating content, playing games, surfing, watching movies, listening songs etc for some days and then run the stress test. This was important for the reusability testing. Each testing has like 2 to 3 days gap in between with continuous usage. In order to ensure standardization, we stick to one CPU Cooler which was Noctua NH-D15. We used the same PWM fan header for consistency and the both fans were set to run at 100% speed at all the times. The chip Intel i7 6850k was overclocked to 4.2GHz using 1.330V VCore during this time with manual CPU Voltage. Hence, all the test data in the graphs will show the testing on the 4.2GHz clocks on the chip. For comparison we decided upon the commonly used Noctua NT-H1 thermal paste. Stress test was conducted using the Asus RealBench V2.44 and temperatures were monitored using the RealTemp software. XMP was loaded all the times. All the reported temperatures are in °C. Each run was of 60 minutes.

First graph is showing the system’s idle temperatures. For reference, we have included the ambient temperature reading as well. Idle readings are calculated by dividing the sum of each core’s minimum temperature by the total no of the cores (6 in our case). To record the idle temperature, system was left for 5 minutes idling without any web browser opened and major background application running. Clearly, IC Graphite was good at its job. 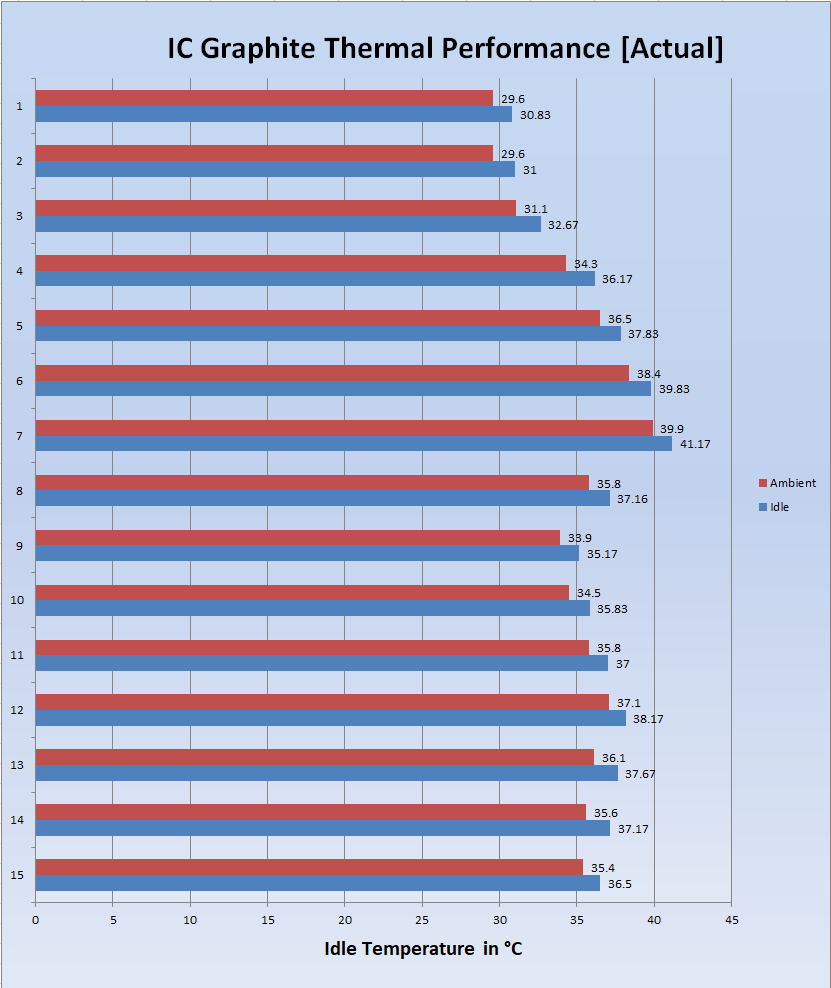 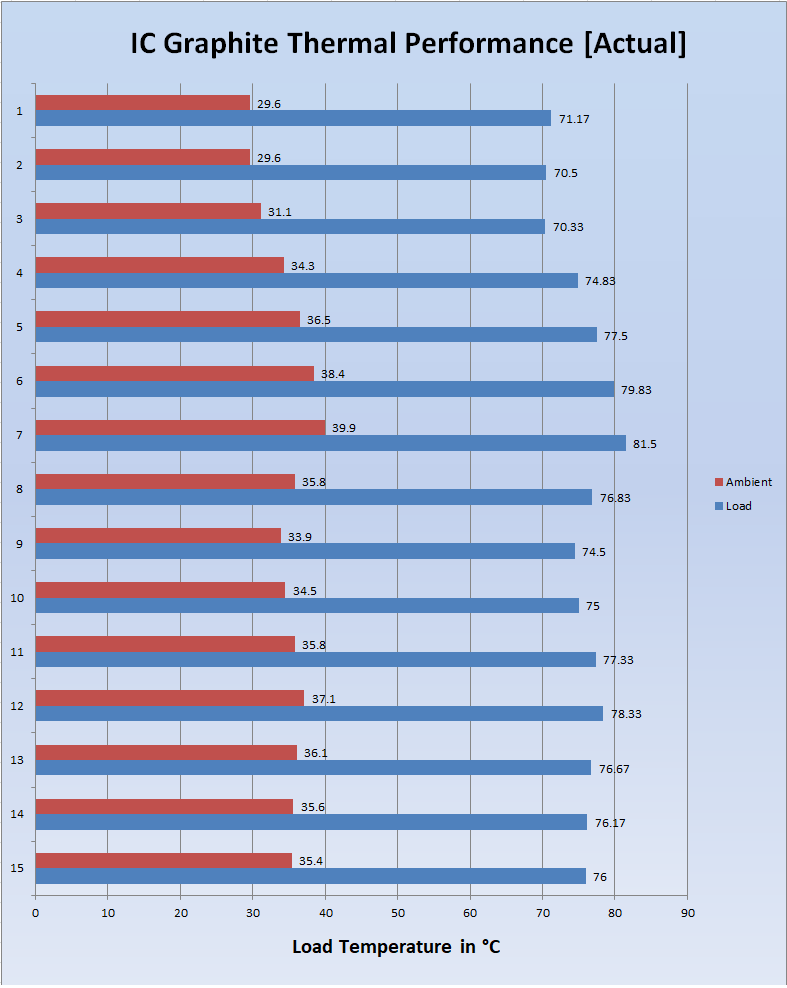 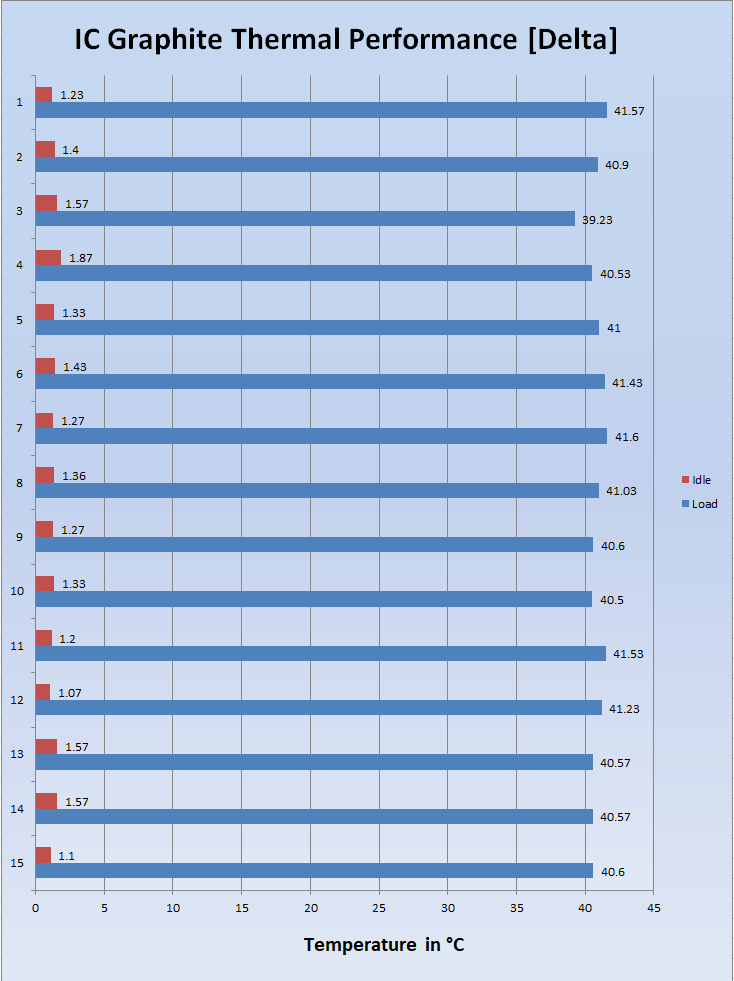 Next graph is showing the variance of the delta temperatures under load with the IC Graphite Thermal Pad. Ideally, this should be a straight line but that is only if it is ideal. It is deviating in between the 40°C to the 41°C range. 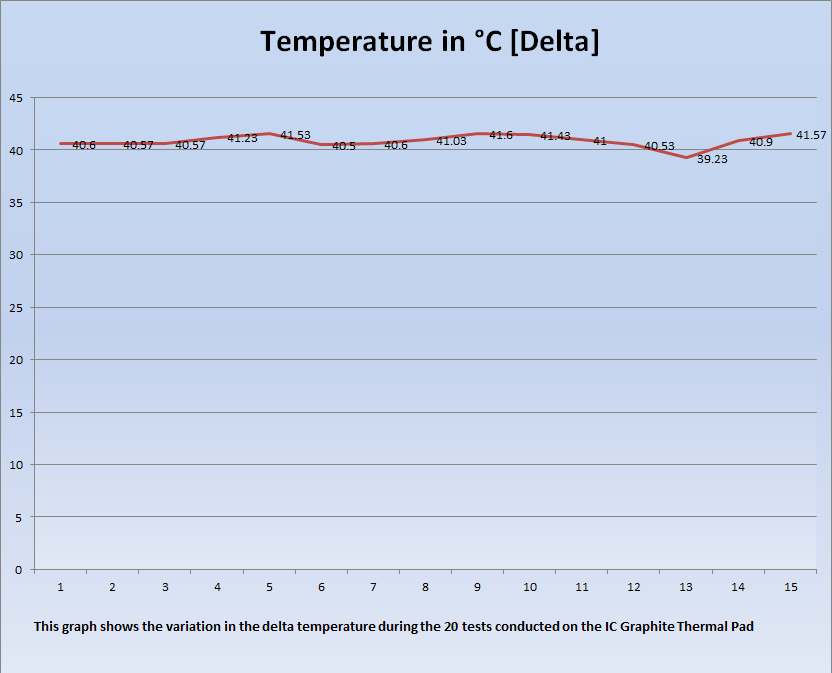 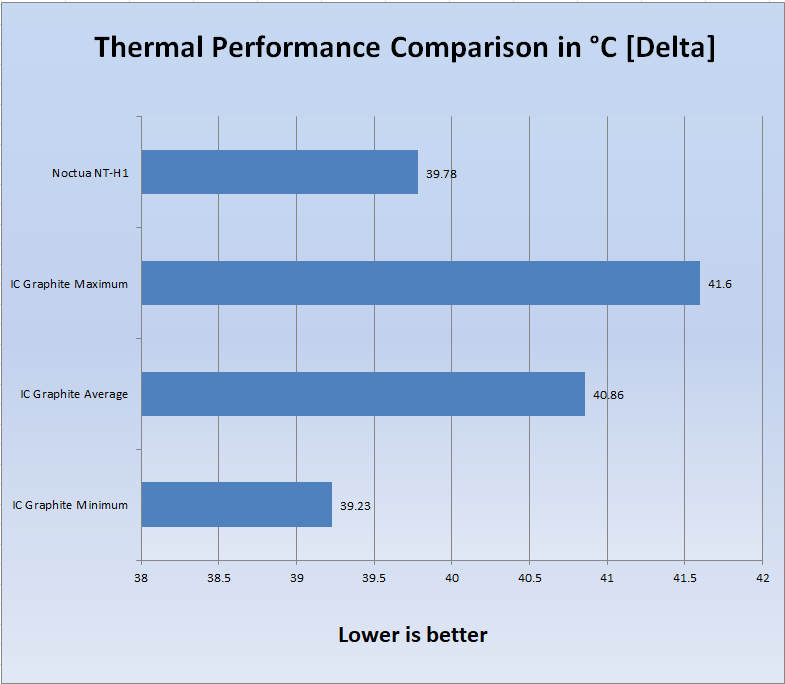 The IC Graphite Thermal Pad from Innovation Cooling is a thermal interface solution for CPU, GPU and Playstation. This is an alternative solution of the thermal pastes. It comes in two sizes; 30x30mm and 40x40mm. We have tested the 40x40mm version. The operating temperature range for this pad is -200°C to 400°C. The thermal conductivity of the pad is 35W/m.k which is higher than the standard and commonly used thermal pastes. This pad is reusable and does not require any maintenance. Unlike majority of the thermal pastes which have liquid in them that tends to dry out after some time resulting in bake and cracks in the pastes requiring fresh application of the pastes, this pad has no such limitation as it does not have any liquid. This will enable the user to use it for years. It is reusable. User can simply take it out and put it between the cooler and the CPU and start using it. We did not get any information regarding the thickness of the pad as it is an important consideration. The pad can be cut to size if so require. Based on our testing, it is recommended not to use the oversize pad for the CPU surface as it would bend the pad from the edges which could tear the pad apart. This pad also gives the peace of mind to the user as user has no longer to ponder over the amount of the thermal paste and application method to be used. Hence, this pad eliminates the human element from thermal paste application.

We have tested this pad 15 times using the Noctua NH-D15 CPU Cooler on Intel i7 6850k at 4.2GHz using 1.330V VCore manual. Each time the system was used for routine matters like content creation, gaming, movies etc before running the stress test. After 15 times testing there was no physical change in the thermal pad. The average delta temperature of 15 tests was 40.86°C with maximum delta temperature of 41.6°C and minimum delta temperature of 39.23°C. The Noctua NT-H1 was doing 39.78°C. This is a good performance for what this pad has to offer to a user. For a onetime payment of $12.99 for 40x40mm and $9.99 for 30x30mm, this is like one time investment for a longer duration of usage without having to worry about re-application or anything. The only thing that could restrict the thermal performance during this time would be dusty cooler. Based on our testing, it occurs that this thermal pad is almost at par with the Noctua NH-T1.

Based on our testing and what the IC Graphite Thermal Pad is offering, it comes recommended by us.

Disclaimer: This content is not sponsored. We have purchased the IC Graphite Thermal Pad from Amazon for this testing.