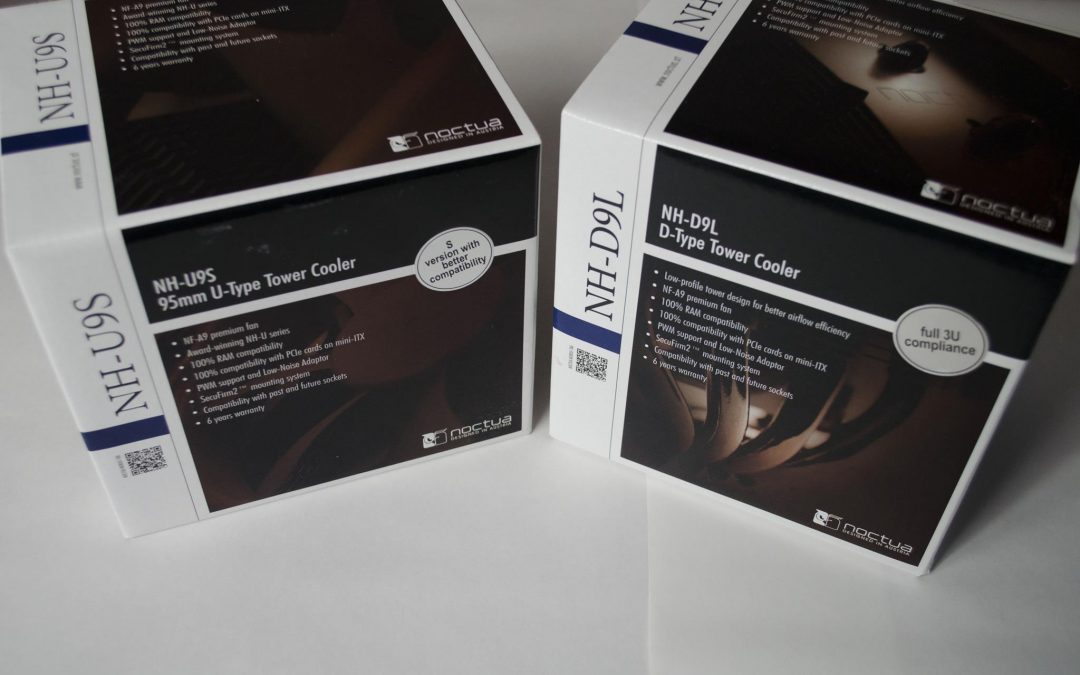 Today, we are going to be taking a look at a pair of CPU coolers from Noctua, the NH-U9S and NH-D9L. These coolers both feature a single 92mm fan, though a second fan is easily purchased if needed. Following on from our NH-C14S and NH-D15S, it will be interesting to see how these smaller coolers handle our new 6700K and Skylake test bench. Noctua is well-known for providing quality products that perform as well as they look and I am sure they haven’t let us down today!

While both of the coolers we are testing come with a single 92mm fan, there is quite a noticeable difference between the two. The U9S features a thicker single tower fin array, whereas the D9L has two thinner towers. It will be quite interesting to see which one comes out on top as they are so similar. It’s also worth mentioning that Noctua was nice enough to send in an extra NF-A9 fan so we could test both these coolers out with two fans on them. Both of these coolers are compatible with most CPU sockets from AMD and Intel motherboards so you shouldn’t have to much to worry about in terms of compatibility unless you are running something very old, in which case you may want to spend the money elsewhere and not on a CPU cooler.

Before we get things kick off, I would also like to announce we are going to host a winners choice giveaway with these coolers! That’s right, one lucky winner will get to choose ONE of these coolers from Noctua, either the U9S or D9L and we will also include that spare NF-A9 fan so you can have some proper cooling goodness. Giveaway will run from July 24th through August 14th. For terms and conditions and to enter, please see the Giveaway section at the end of the review.

Both Coolers come with SecuFirm2 mounting kits which feature everything you will need to get these coolers mounted on most AMD and Intel systems! 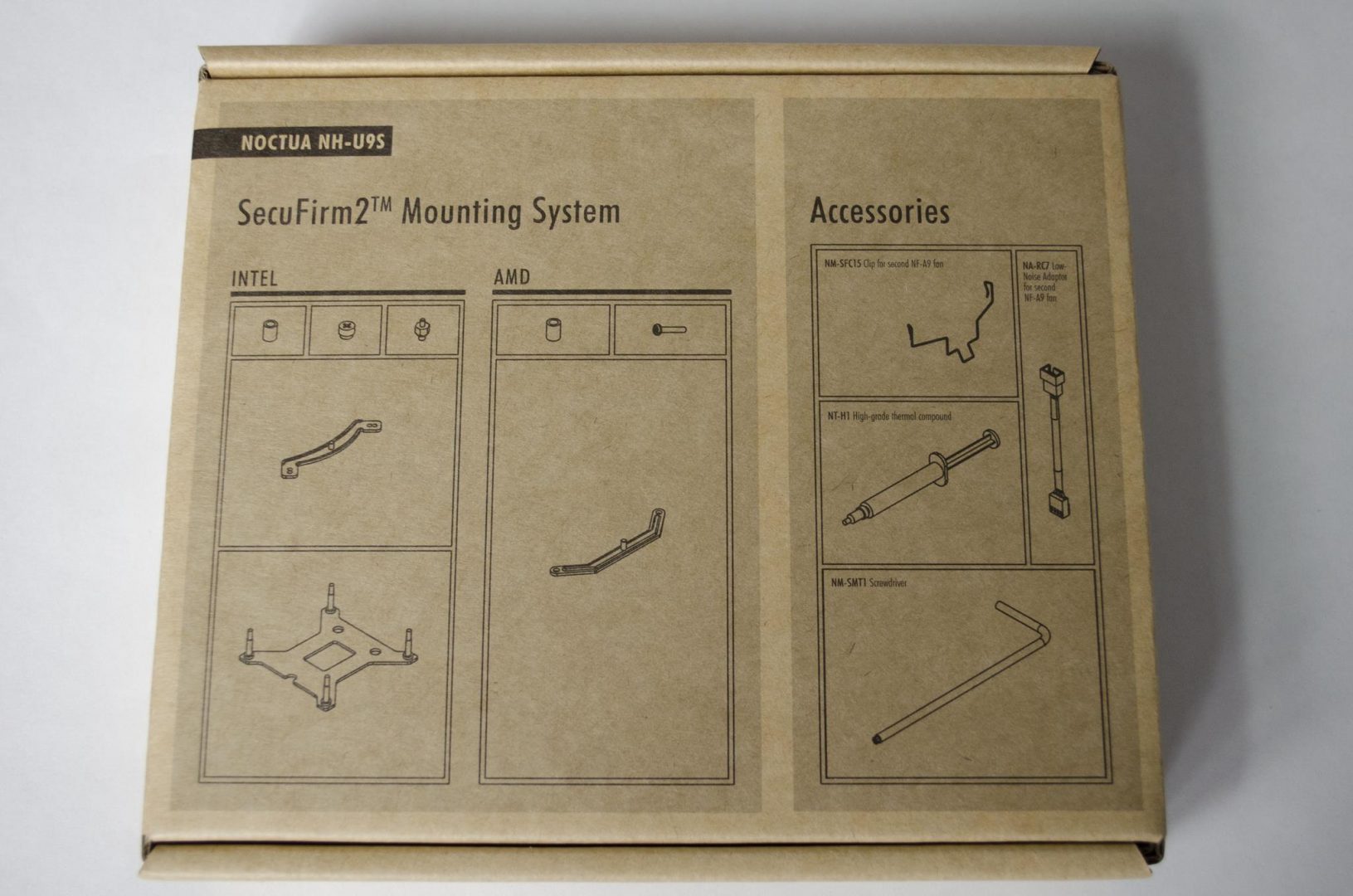 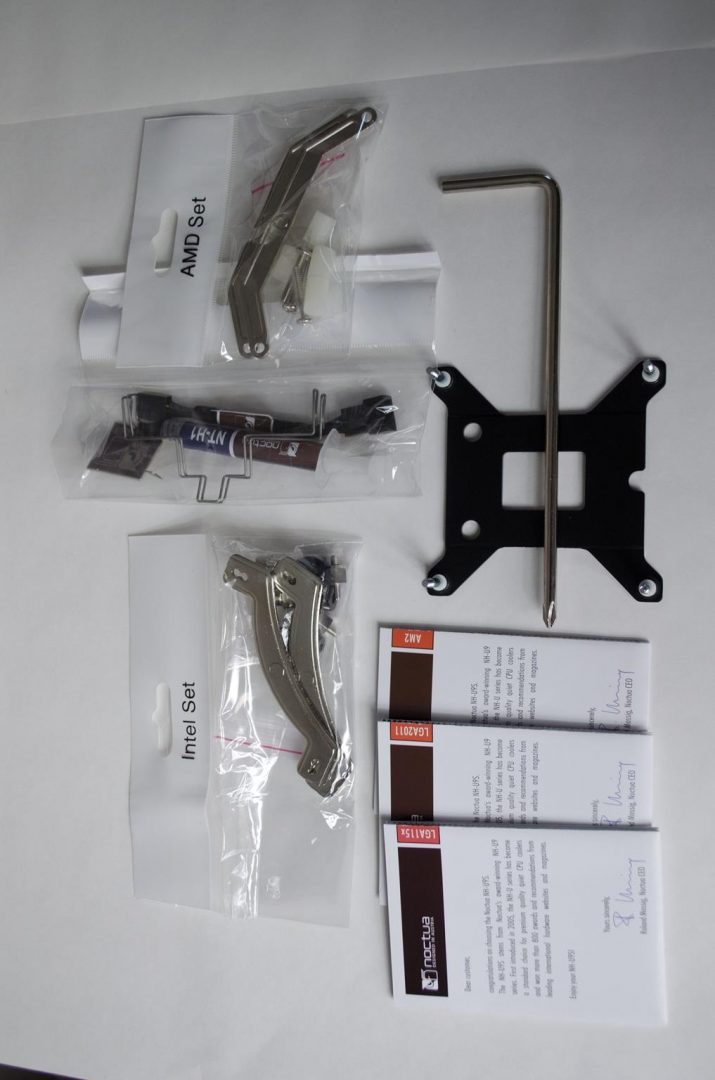 As mentioned, the U9S features a single tower fin array and comes equipped with an NF-A9 fan right out of the box. It is worth noting the fan will have to be removed during installation but that is easily managed. 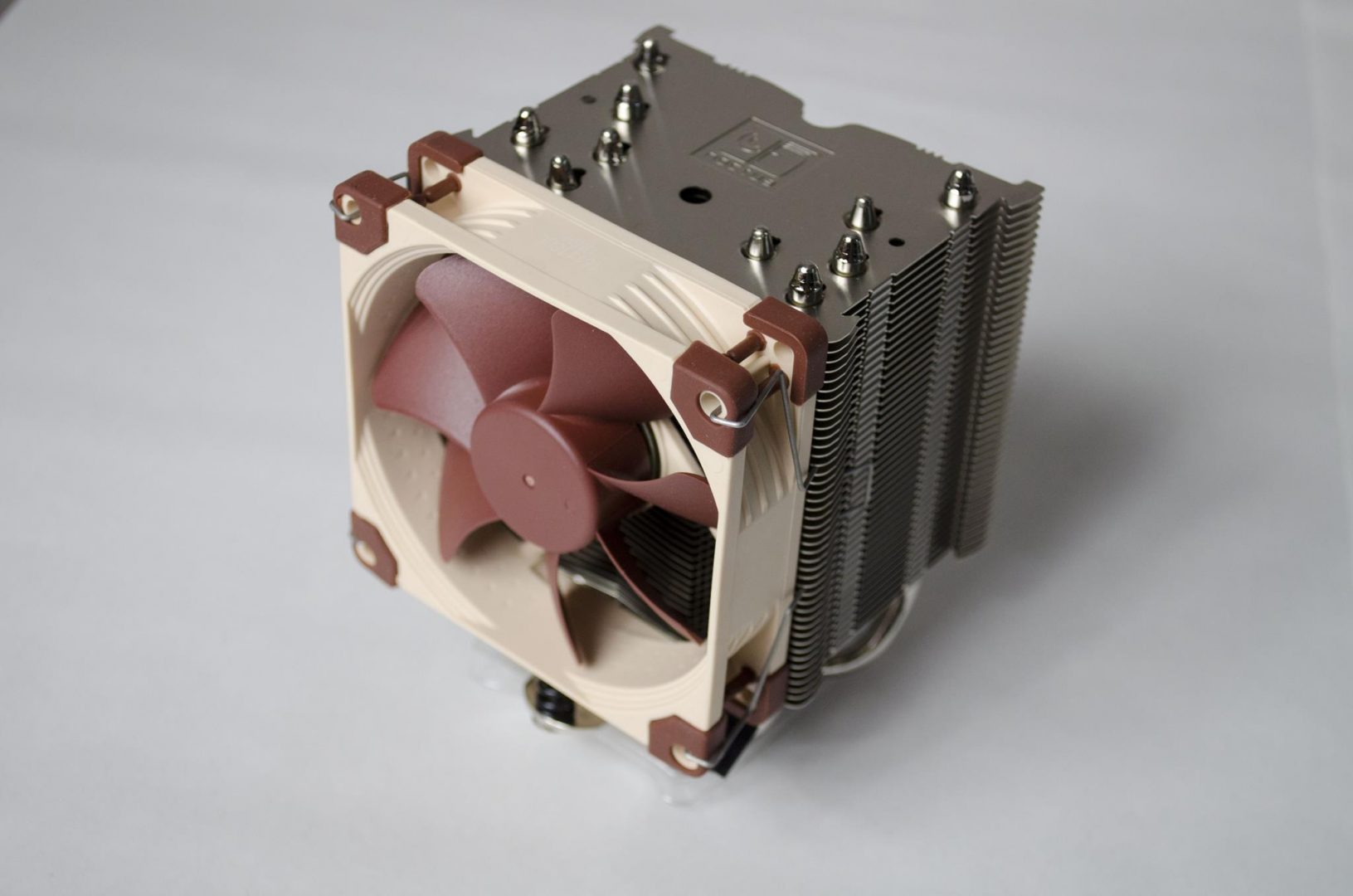 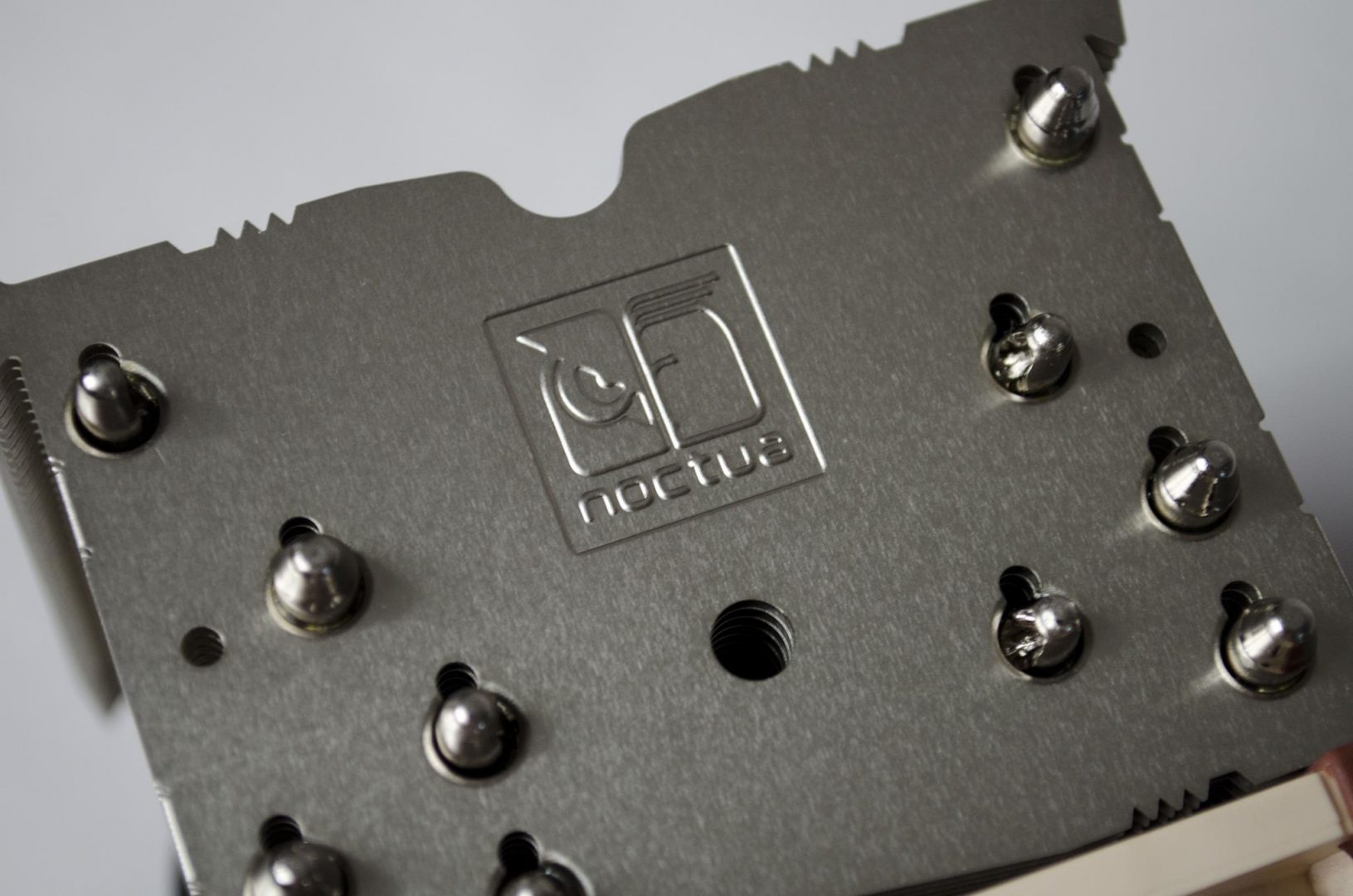 Taking a look from the back and side, we can see the shape of the individual aluminium fins. On the sides, they are designed to allow fans to be clipped on. The fan is easily removed / installed with a small retention clip that just pulls off, or is clipped into place. 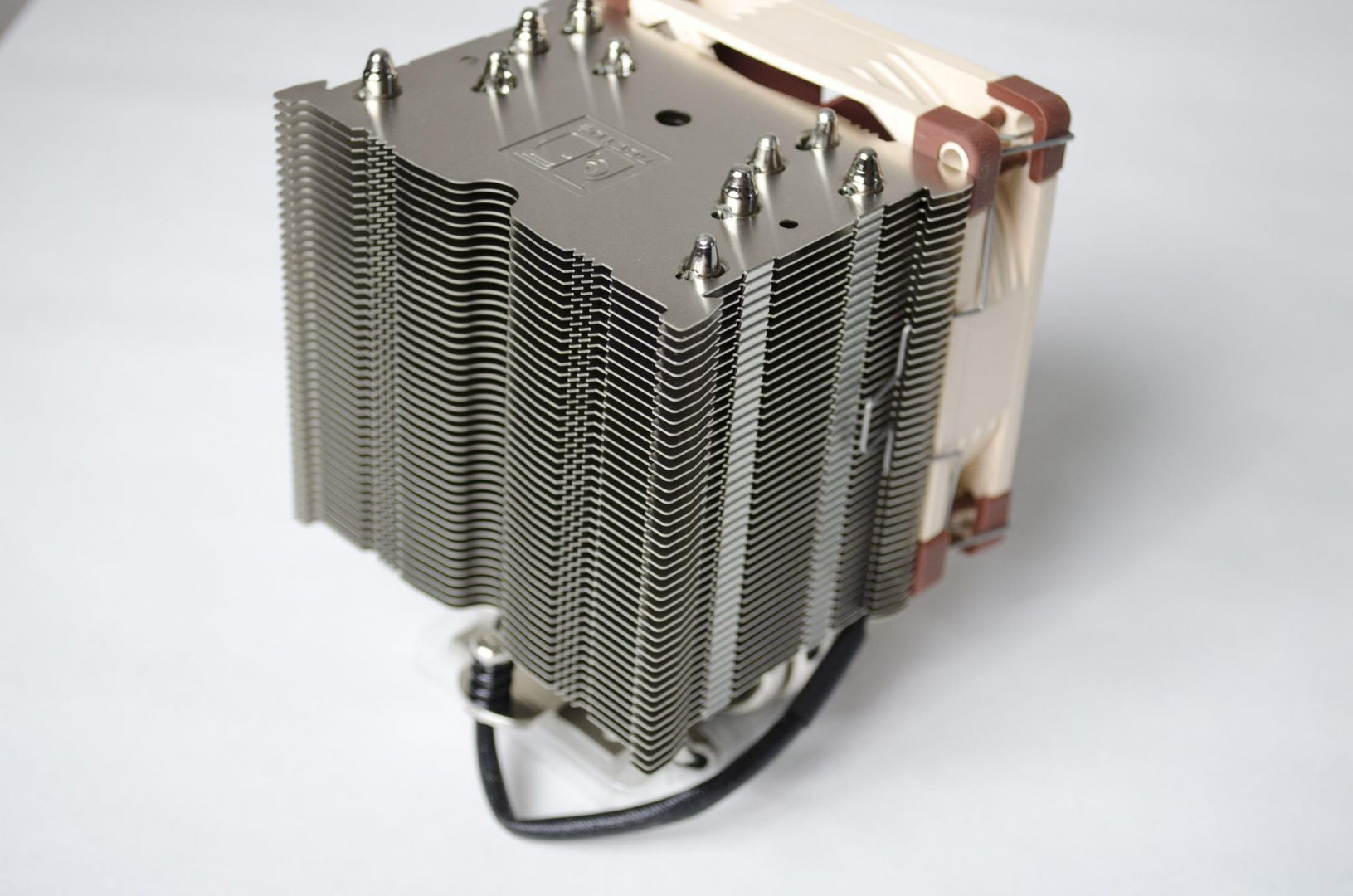 Flipping it onto its side and we can see how the heat pipes pass through the nickel plated base plate. The base plate is what will sit on top of your CPU and will allow for the dissipation of heat. 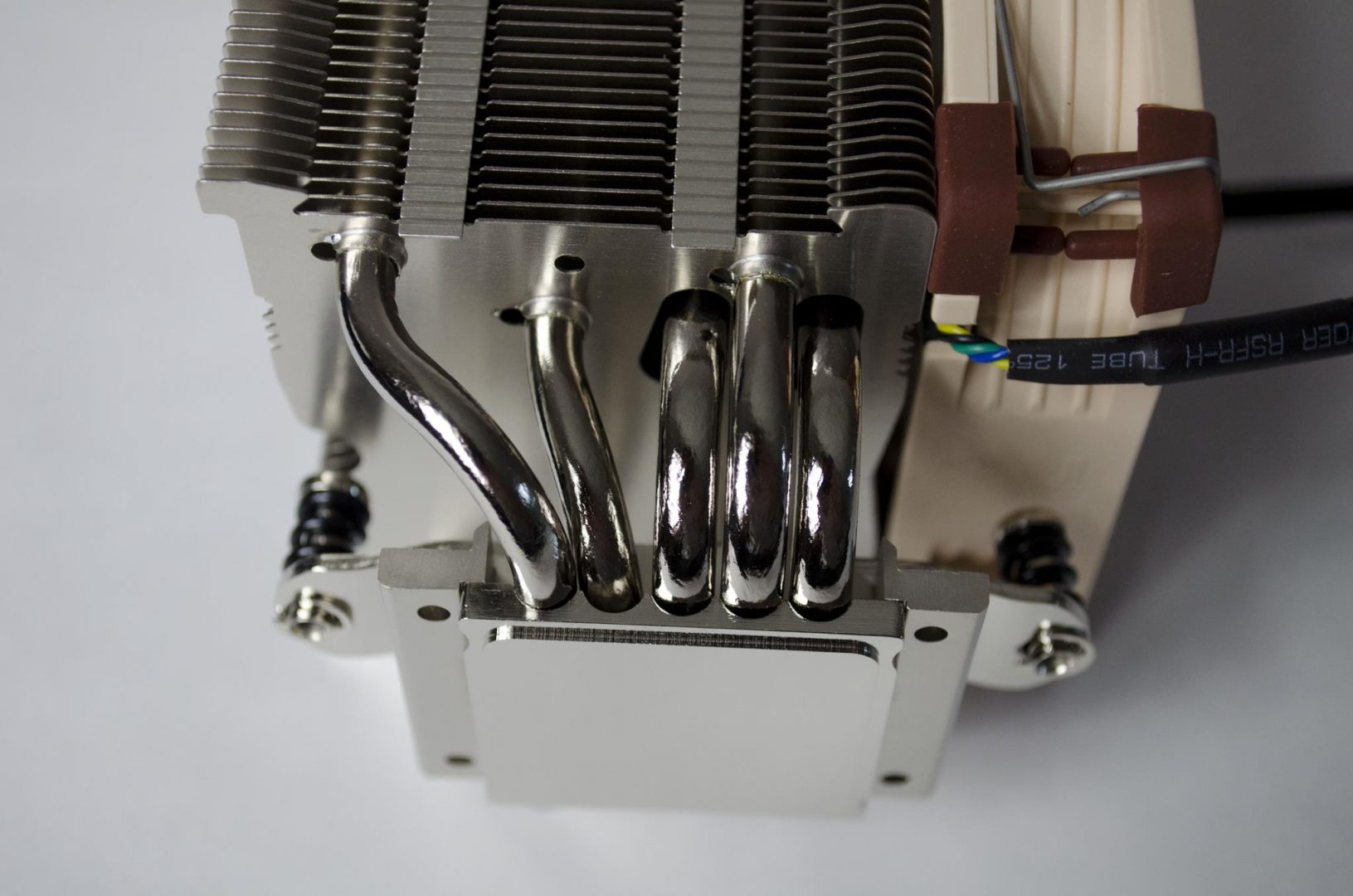 As we can see, the base plate does feature a highly reflective surface, though I wouldn’t consider it a mirror surface. These nickel plated base plates have pretty much become the normal standard these days, rather than the old copper base plates we used to see. 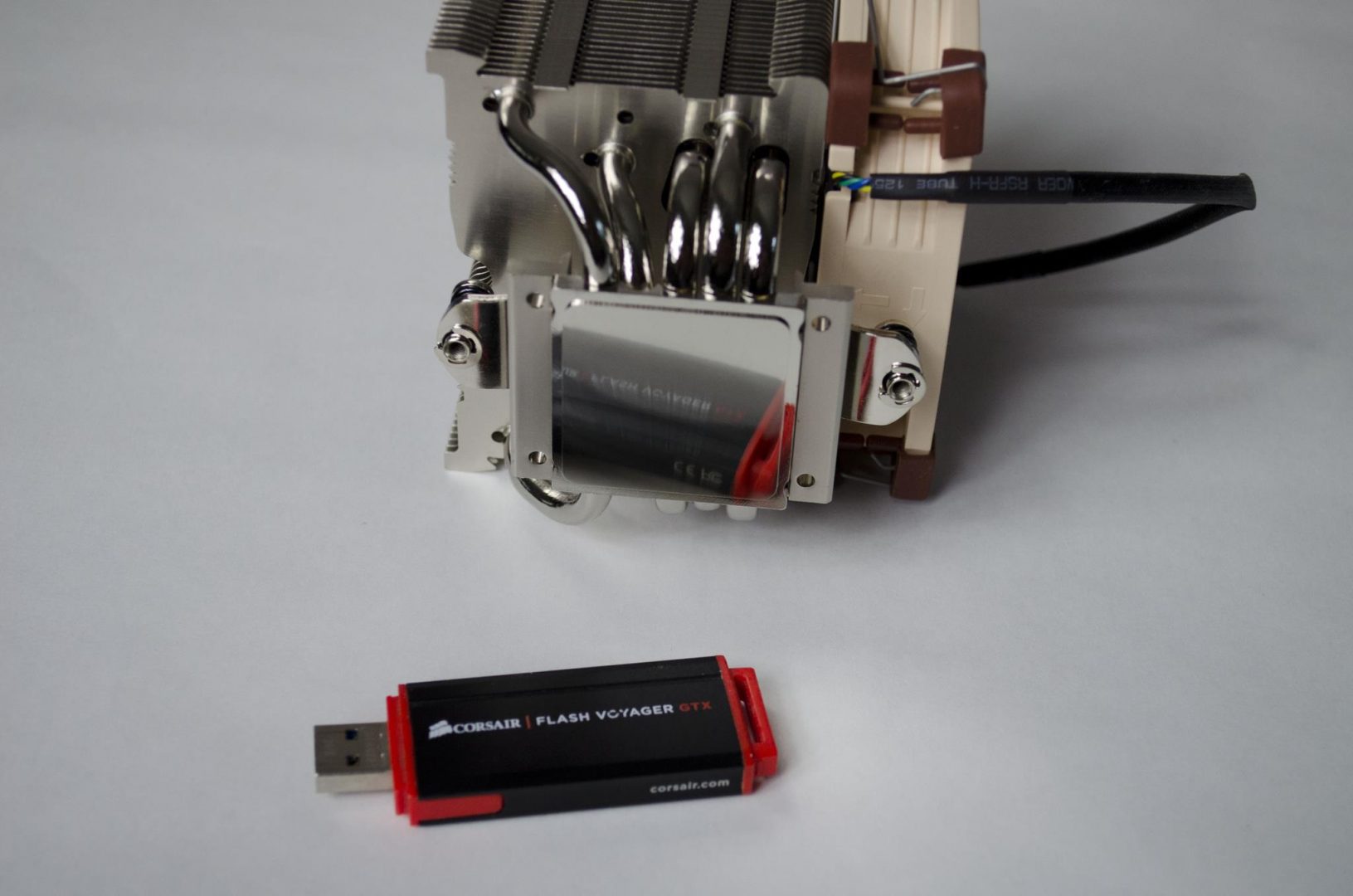 As mentioned the main difference between the D9L and U9S is that the D9L has dual fin arrays. The D9L also only has four heatsinks so it will be quite interesting to see the results of our testing in the next section. When taking it out of the box, the fan is placed in between the two fin arrays. Now, depending on your plans, this is easily changed if need be! 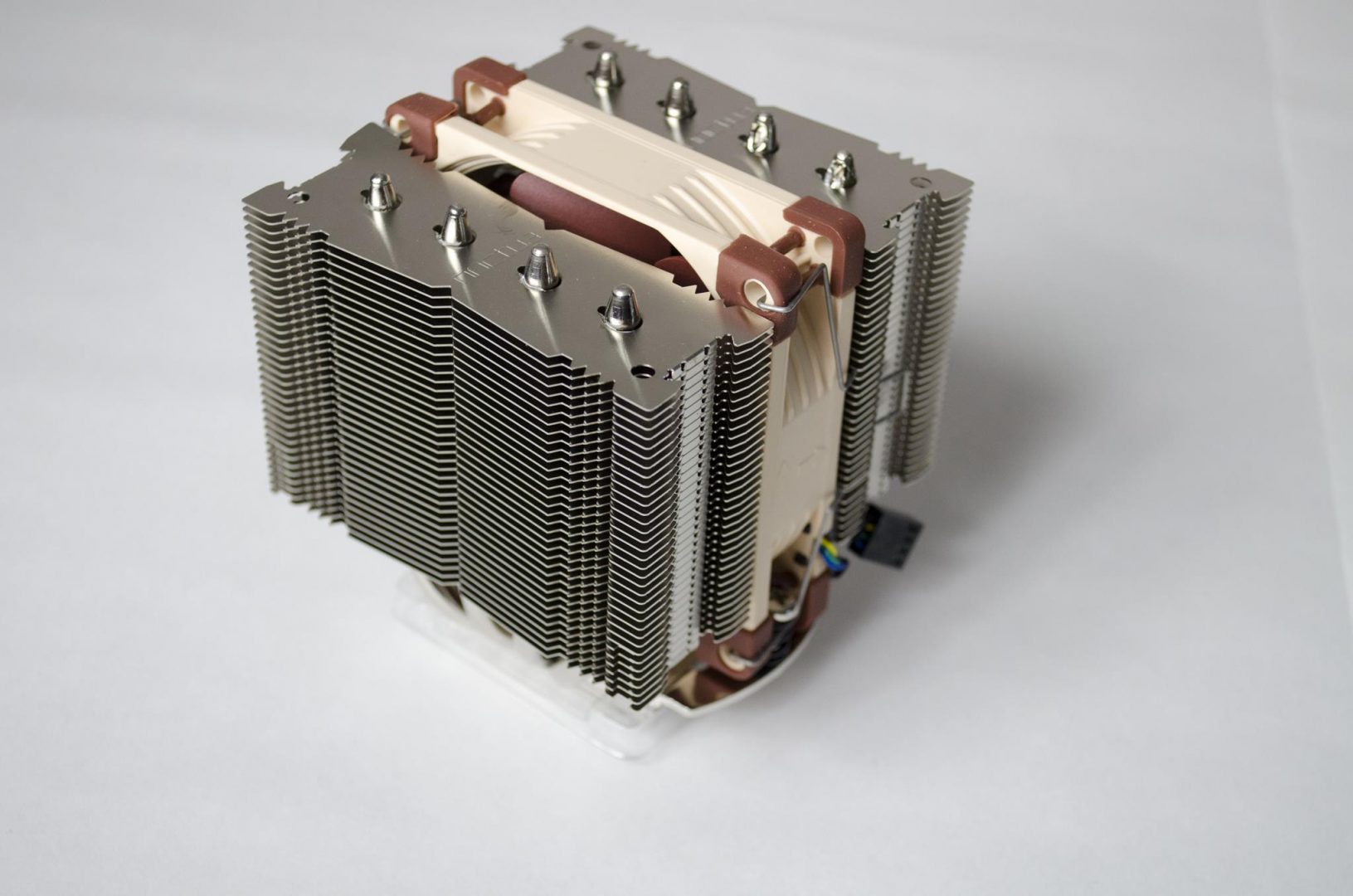 While they have left out the Owl logo, this time, Noctua has still included their name on the top of each array. 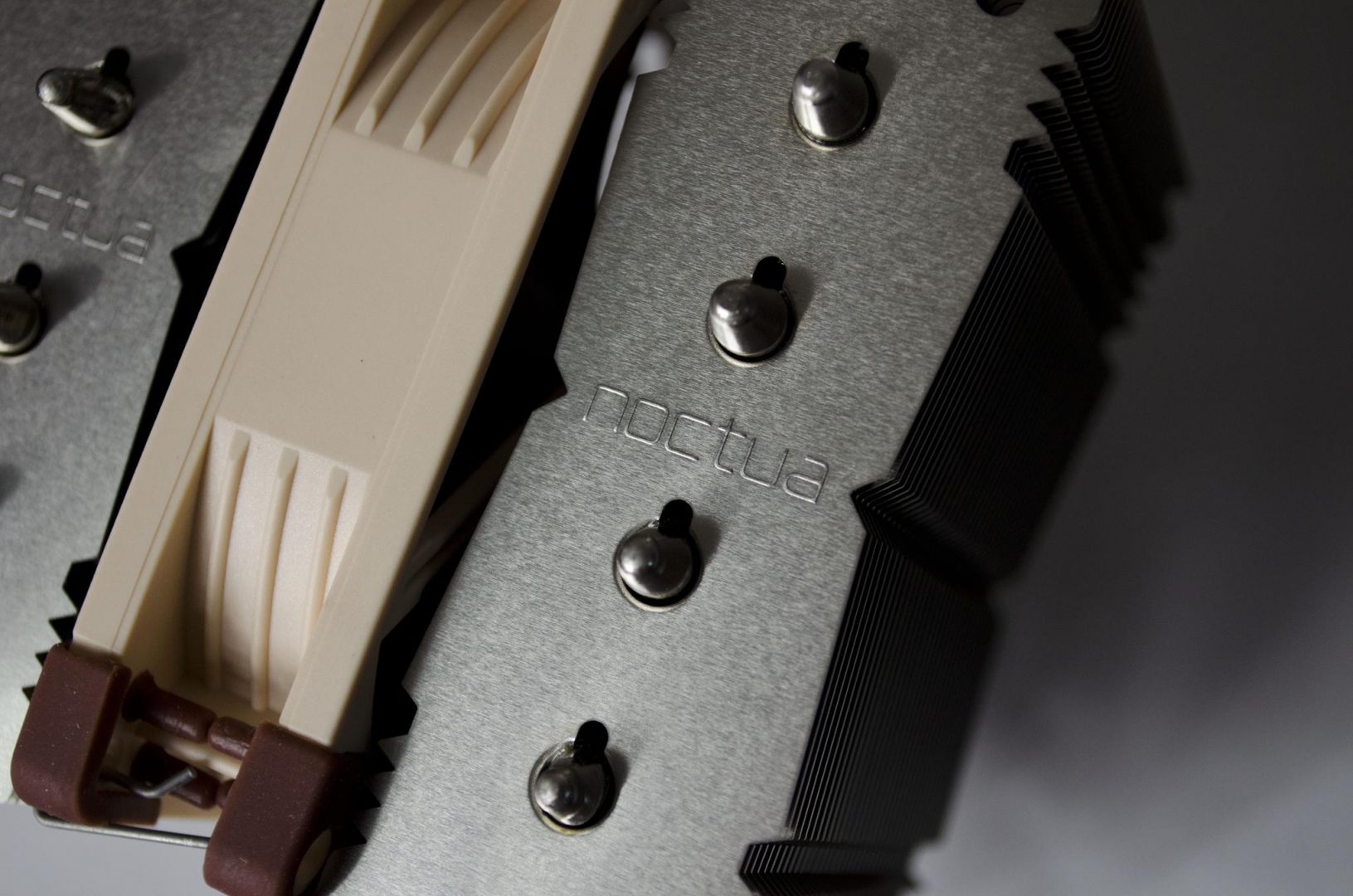 The four u-shaped heat pipes protrude through the top fins on each side to allow for maximum heat dissipation. 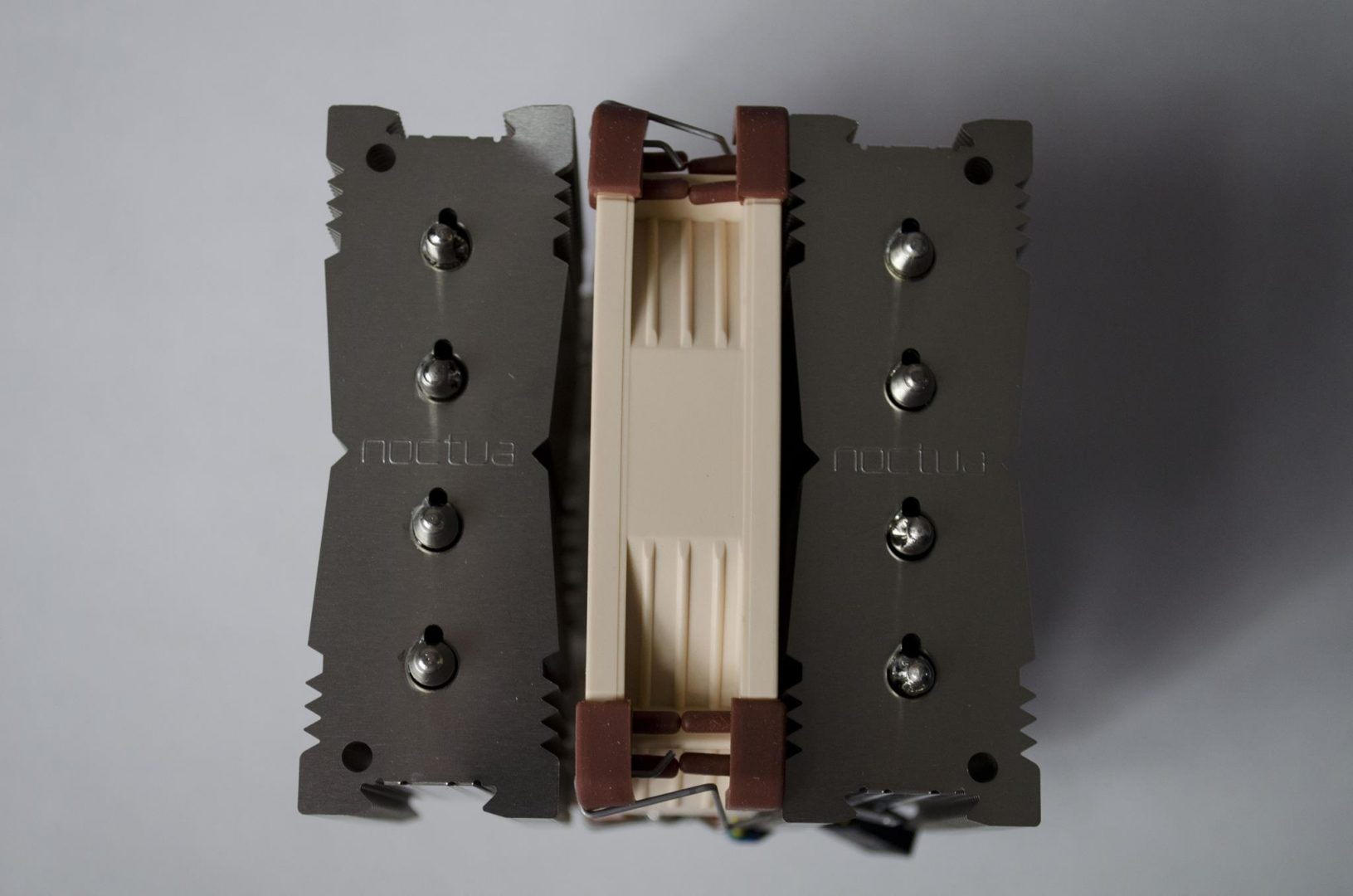 Looking at one of the sides, we can see the fan tells us which way the air from it will blow. This will come in great handy when installing it so we can make sure to keep the airflow in our case just how we want it. 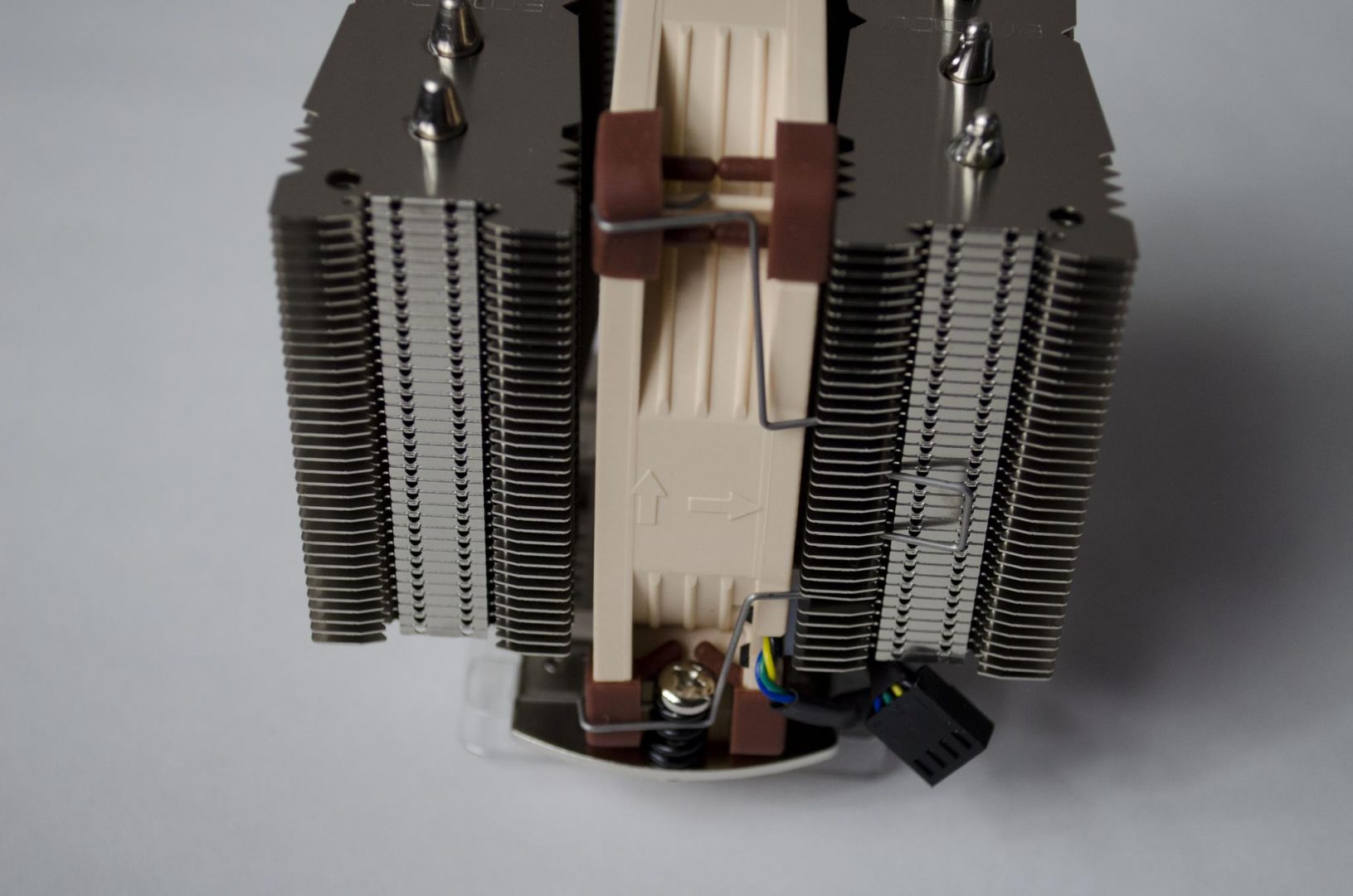 Looking at the fin arrays from the sides and we can again see how they are designed to allow a fan to be clipped onto either side. The cool thing about the D9L is should you want to have some fun, you could actually put three fans on this bad boy! 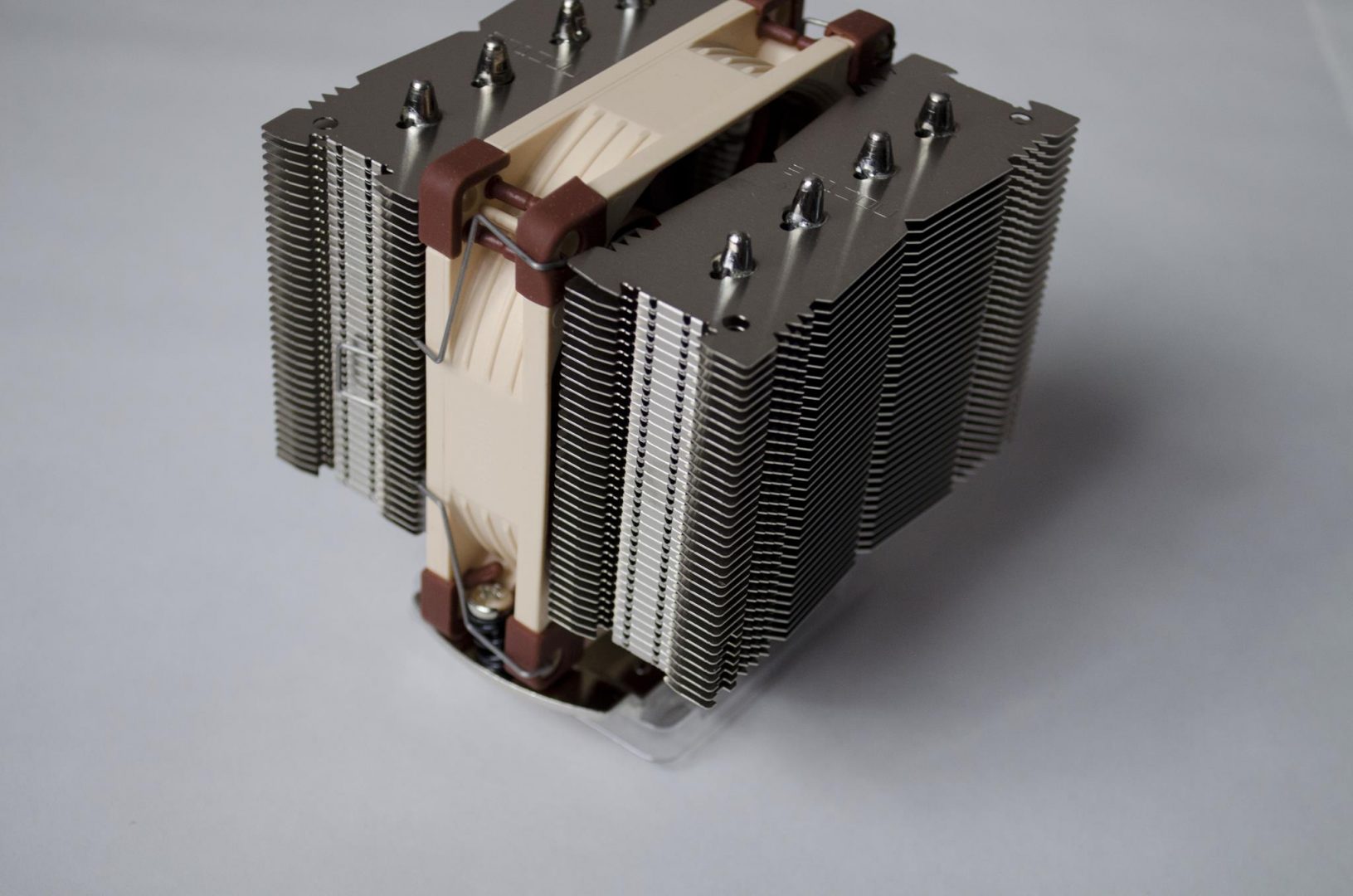 The heat pipes pass through the base plate of the D9L almost identical to that of the U9S, except for the fact there is only four and not five. 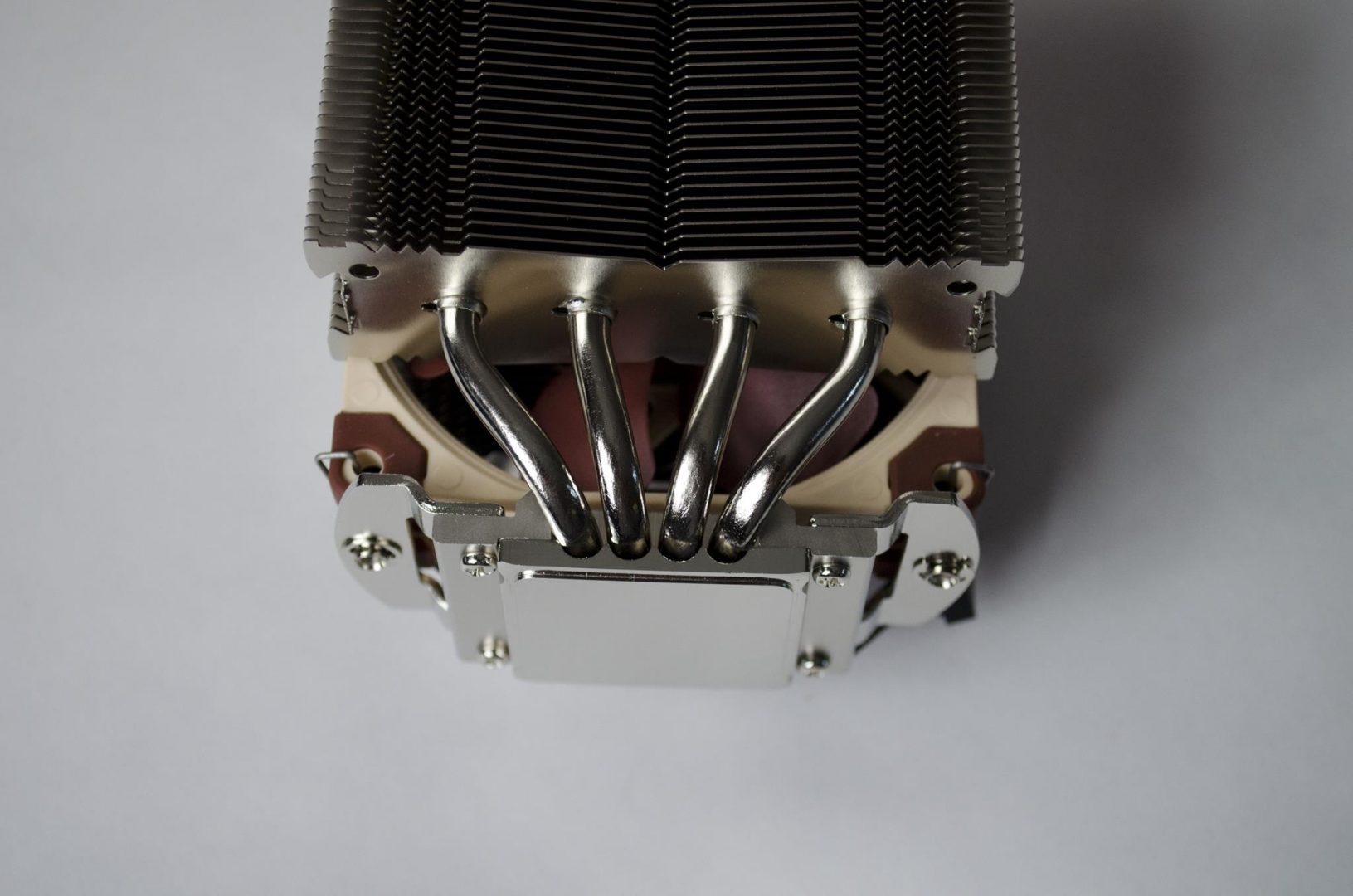 Again, we see a semi-reflective surface on the bottom of the D9L on its nickel plated base plate. 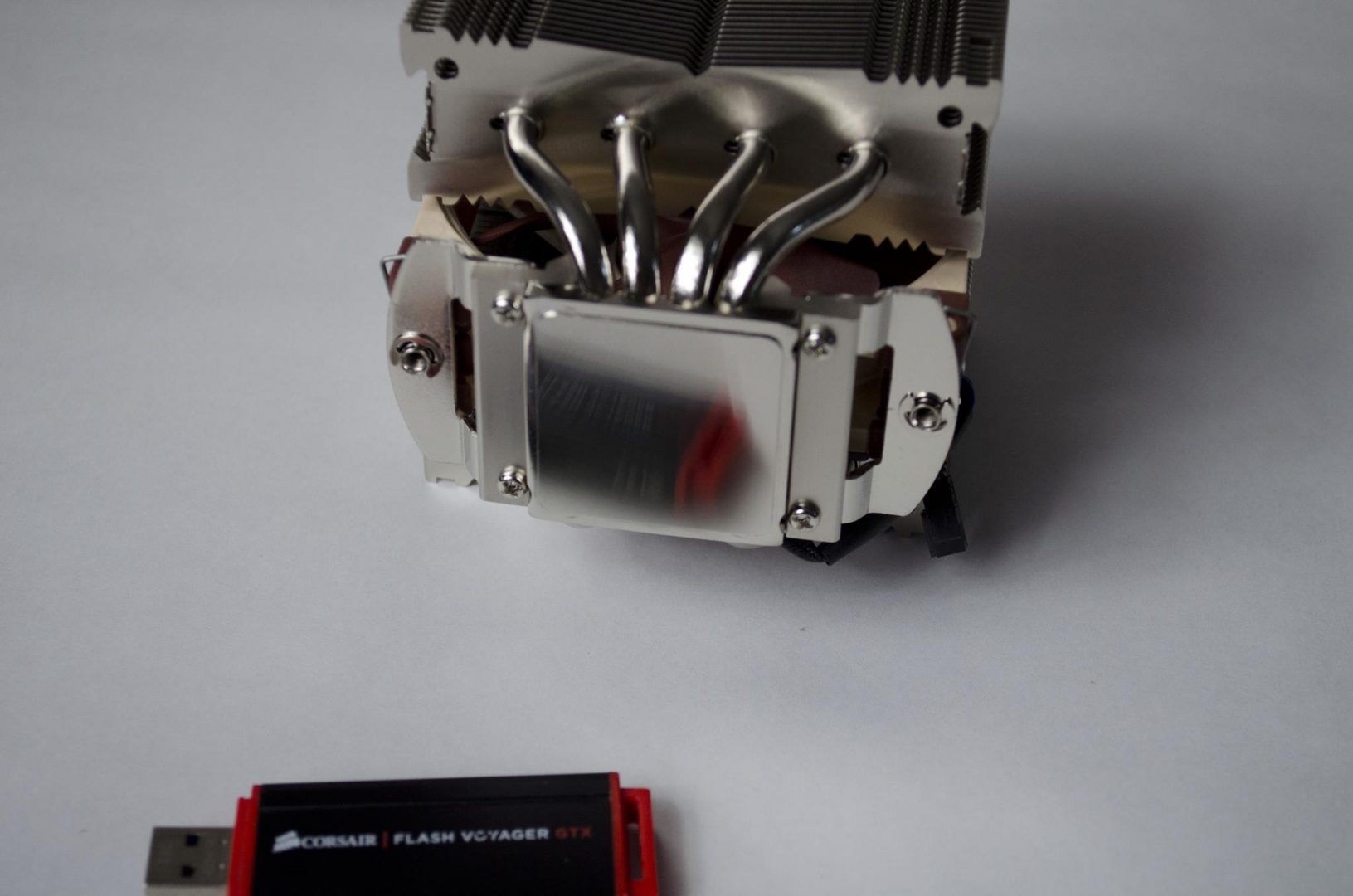 To get things kicked off, I had to install this on a Socket LGA 1151 motherboard. First, you want to insert the backplate as shown with the screws coming out through the front. 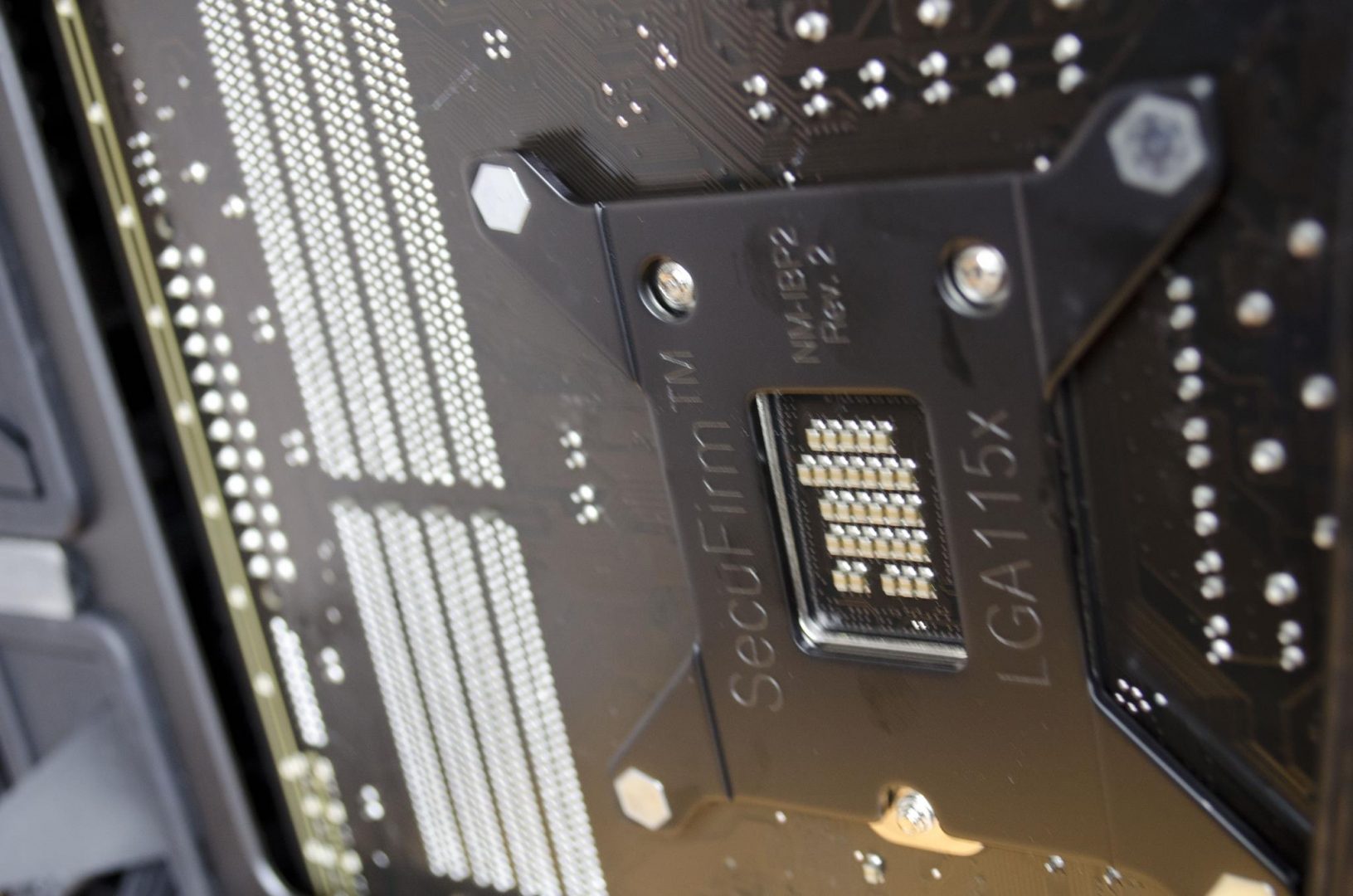 Next, you want to add the black plastic washers onto the screws on the frontside. 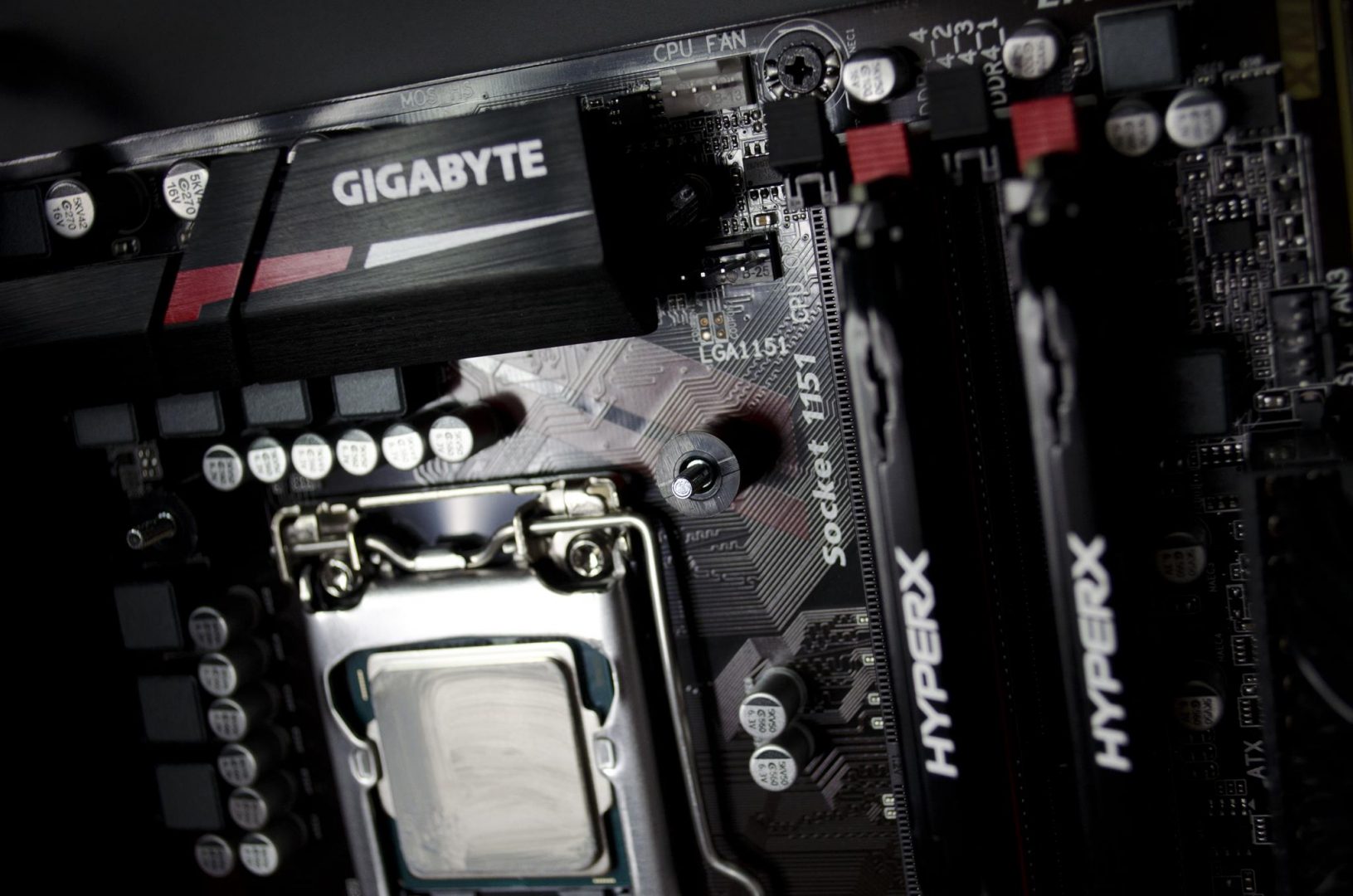 Now we can rest the retention brackets on the black plastic pieces and use the thumb screws to secure them to the backplate. 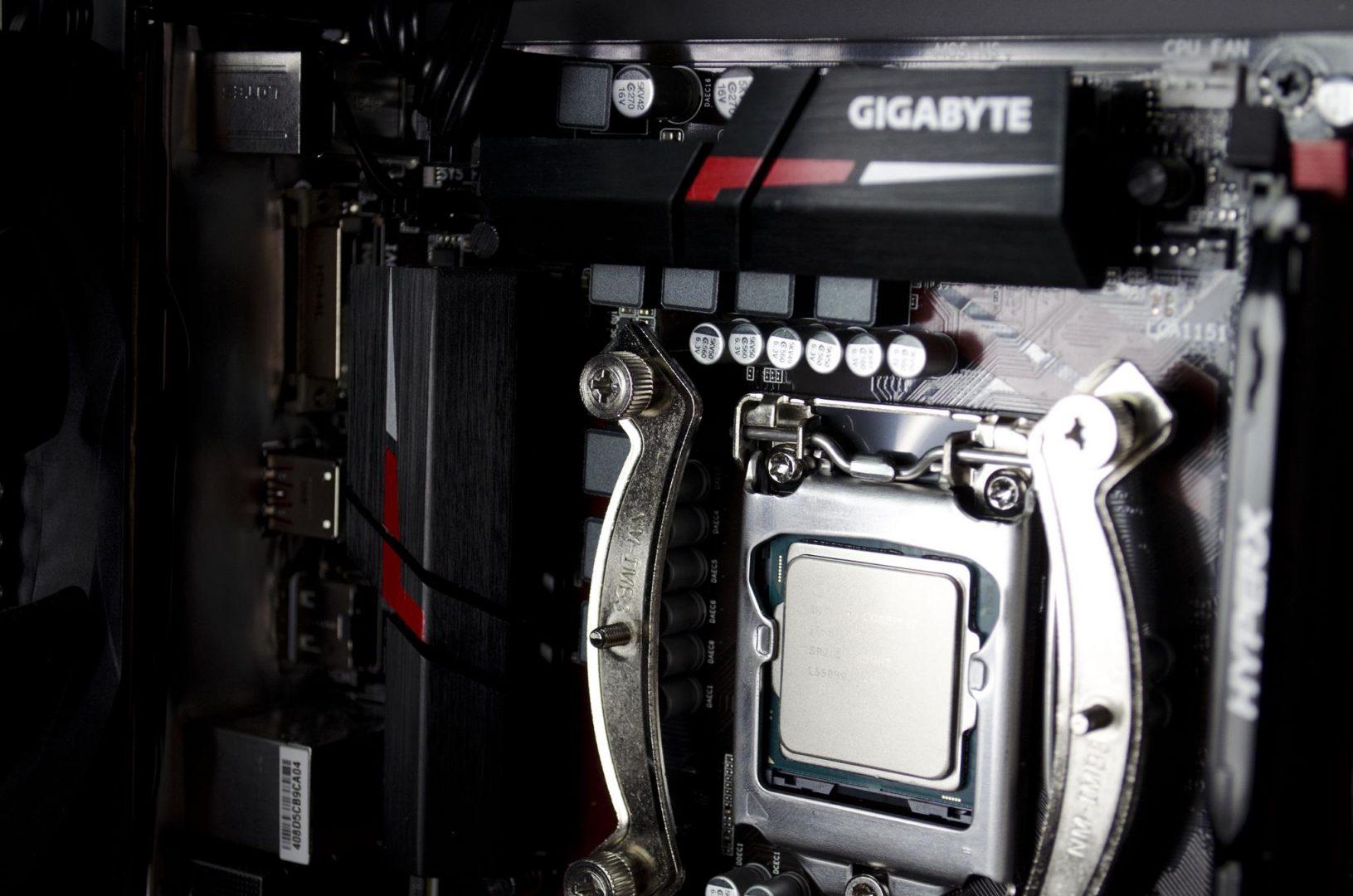 Now it is time to install your thermal paste and set the cooler atop the retention brackets and secure it in place. Please note, you will need to remove the fan to do this in a lot of cases. Also, while the mounting kits are similar, they may have a bit different retention brackets. For instance, the D9L cooler does not fit on the mounting for the U9S as the brackets the coolers will sit on are different. 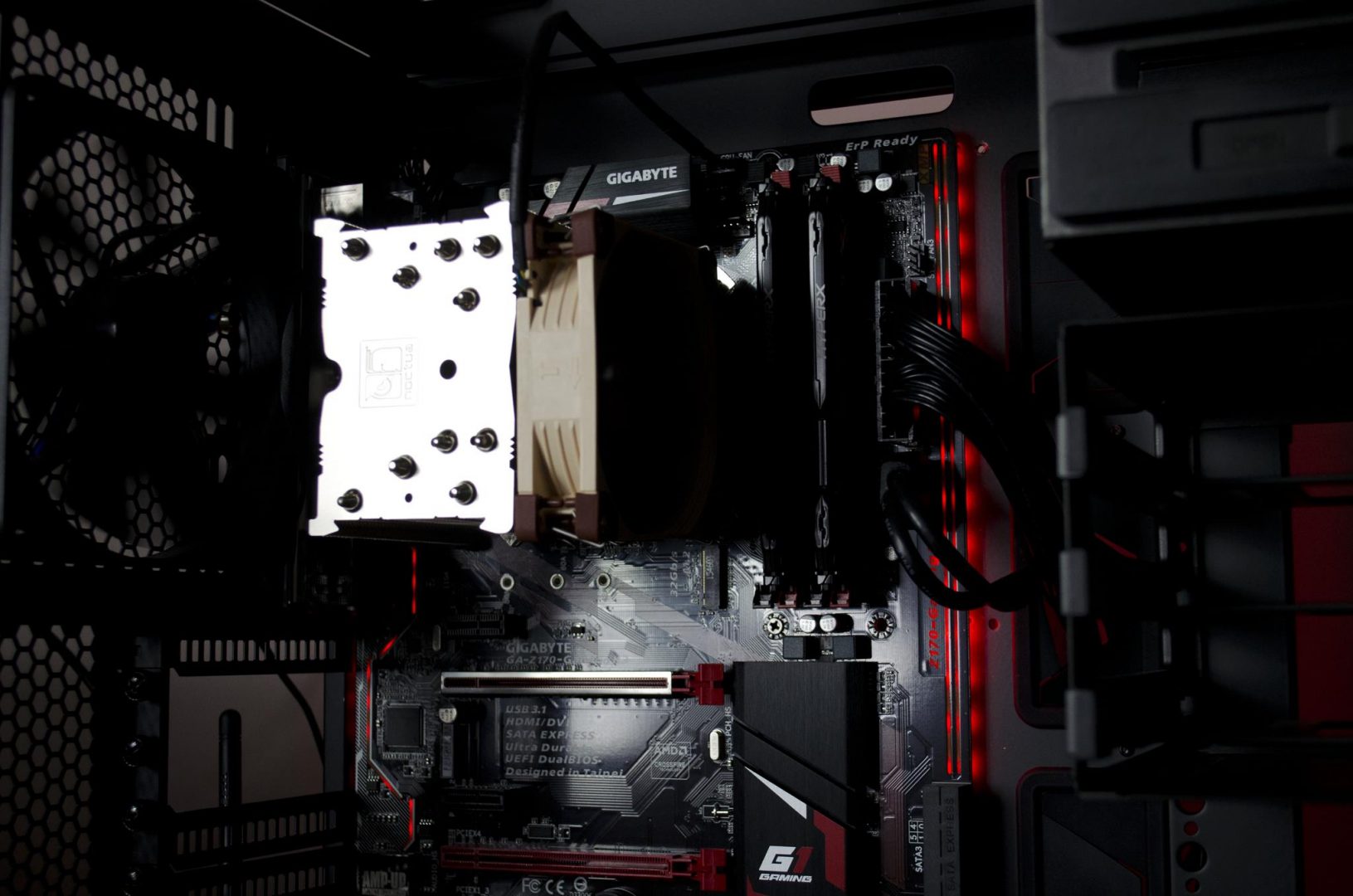 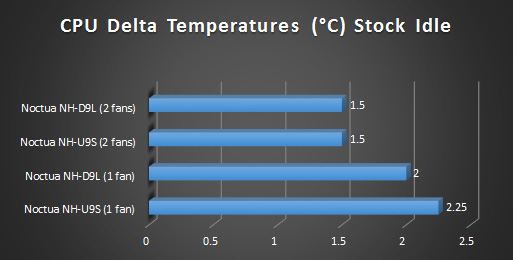 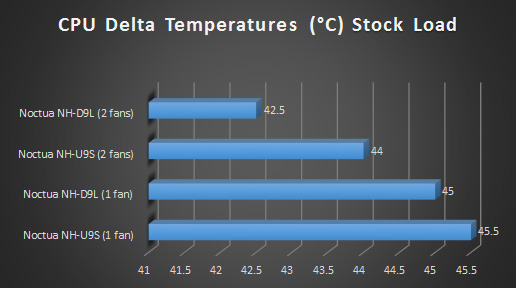 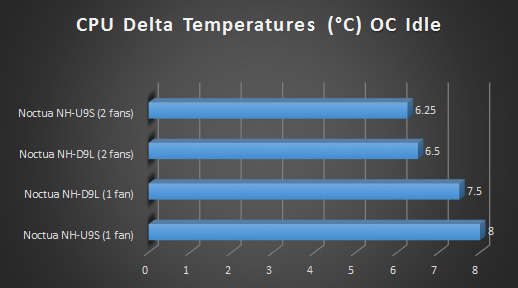 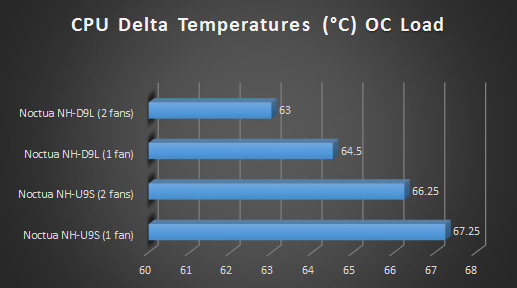 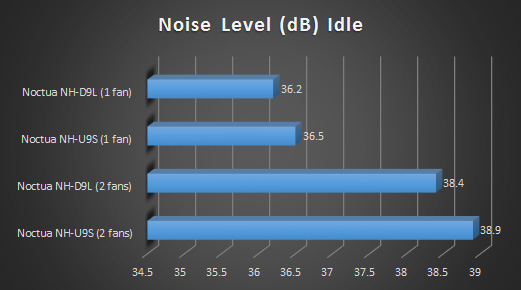 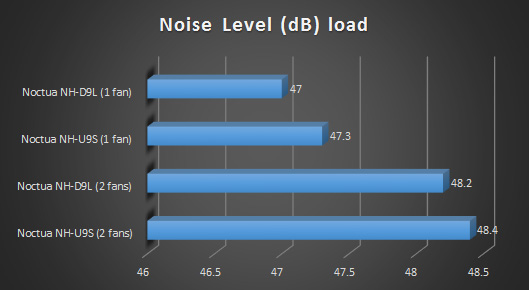 So the time has come, I’ve put both the NH-U9S and NH-D9L through their paces and while there is a clear winner in performance, they are both very worthy coolers. By today’s standards, these coolers are a bit smaller than most we see as companies lately have taken go big or go home to a whole new level. Noctua has graced us with some more normal sized coolers that still offer great performance, so let’s wrap this up and see how I really feel about them.

While the D9L has come out on top by a few degrees, both of these coolers offer some good performance for their sizes. I had my 6700K pushing out 1.4V and while I wouldn’t use this for day to day clocks, I thought it would be a good way to test the performance of CPU coolers and it is. Both the U9S and D9L were able to handle the heat and stayed within the limits of safety for CPU temps, which is very important, especially when overclocking. As per their standard configurations, both of these coolers only come with one fan, but adding the second fan does allow for a bit better temperatures, even if not by much. Adding the second fan onto the coolers and temperatures dropped around 2c when doing a full load test on the overclocked settings.

Noctua is known for their impeccable design from an engineering standpoint. Their colour schemes may not always be such a hit, but there is no denying the performance their products have to offer. Both the D9L and U9S are designed to use 92mm fans and come equipped with one as per normal. From taking them out of the box and putting them straight onto your CPU, they will do what they are set out too. My favourite thing about the Noctua coolers is probably the SecuFirm2 mounting as it allows you to install the cooler in a matter of minutes!

This is where the coolers get a bit more separated in my opinion. While the D9L offers better performance overall, the U9S comes in at around £13 cheaper, which more than makes up for the difference of a couple degrees. The D9L is asking around £53 at the moment on Amazon UK and for the price, you can get some coolers that are a bit bigger that offer a tad better performance. However, if you need a smaller cooler due to space limitations in your case, they, by all means, the D9L is still a great cooler. In terms of value, though, the U9S steals the show and is a real crowd pleaser coming in at around £39 at the time of reviews!

NH-U9S – Thanks to its sub £40 price tag and the fact that the performance it has to offer is only a few degrees of the D9L, I have given this the Value award today!
NH-D9L – Due to the performance on offer from a cooler of this size, I am awarding the D9L our Recommended award today!

Major Thanks to Noctua for sending in both of these coolers for the review!

One winner will get to choose either the NH-U9S or NH-D9L as their prize and we will also include an extra NF-A9 92mm fan as well!