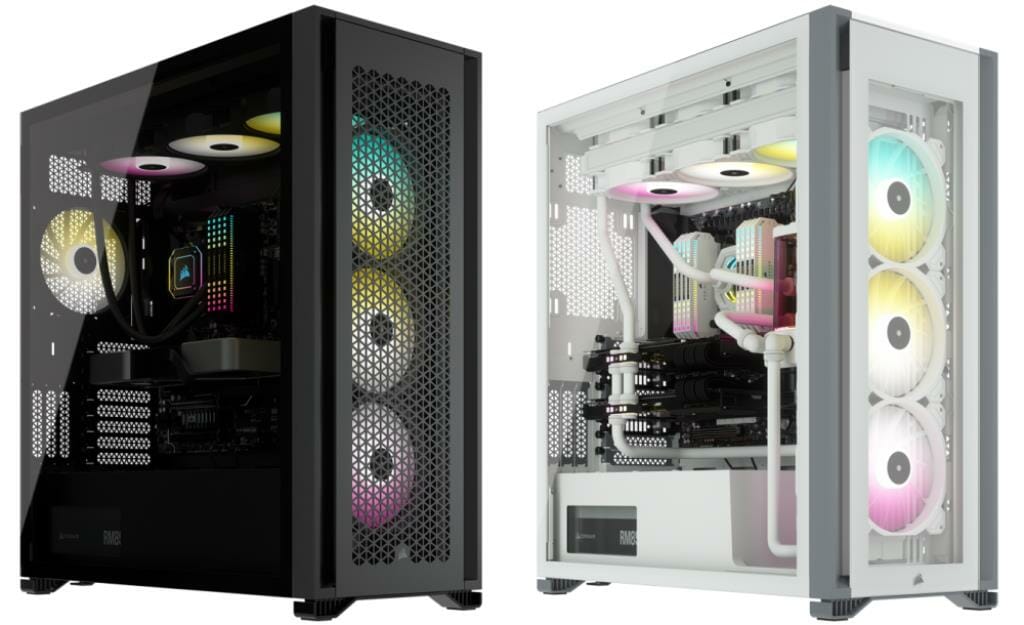 Choosing from either the 7000D AIRFLOW’s perforated steel high-airflow front panel, or the 7000X RGB’s three beautiful tempered glass windows to showcase your system and lighting, PC enthusiasts will find the ideal case for their next masterpiece.

The cavernous interior of 7000 Series cases offers a multitude of cooling configurations to handle almost any PC cooling setup, with room for up to 12x 120mm or 7x 140mm cooling fans, or multiple radiators including up to 3x 360mm or 2x 420mm simultaneously. A specialized motherboard tray with customizable fan mounts enables you to install up to four 120mm fans or up to a 480mm radiator into the side of the case. 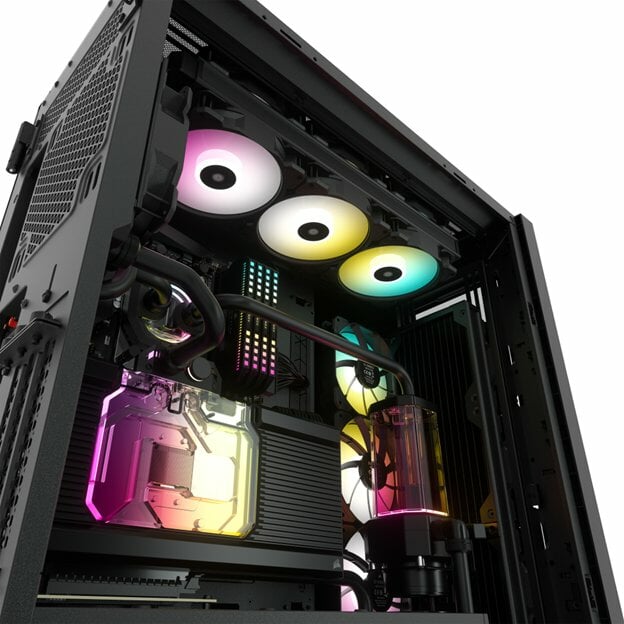 The 7000D AIRFLOW includes three 140mm fans with CORSAIR AirGuide technology, for concentrated airflow directed toward your PC’s hottest components. The 7000X RGB goes a step further and adds radiant RGB lighting with four included SP140 RGB ELITE AirGuide fans, each equipped with eight individually addressable RGB LEDs. An included iCUE COMMANDER CORE XT controller, CORSAIR iCUE software, and a PWM fan repeater provide comprehensive control of not only lighting, but fan speed and performance too. Both the 7000D AIRFLOW and 7000X RGB offer an abundance of storage space including 6x combo 2.5in / 3.5in drive trays and 3x 2.5in SSD mounts. A full array of front panel I/O connections including a USB 3.1 Type-C port and 4x USB 3.0 ports ensures the 7000 Series meets the needs of nearly any system. 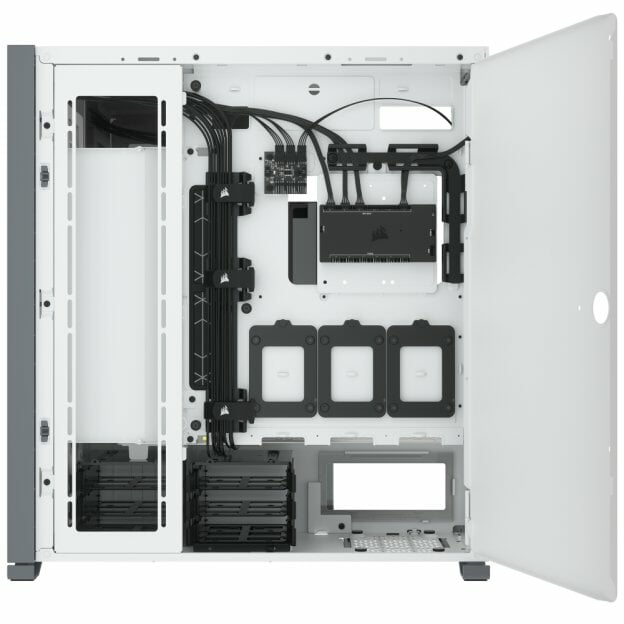 The 7000 Series’ tempered glass window showcases your premium components, while the case cleverly conceals your cables. The CORSAIR RapidRoute cable management system routes major cables through a single hidden channel, with a spacious 30mm of routing depth behind the motherboard and two tool-free hinged side panels for easy access. A three-slot vertical GPU mount on the PSU shroud puts any size graphics card center stage. 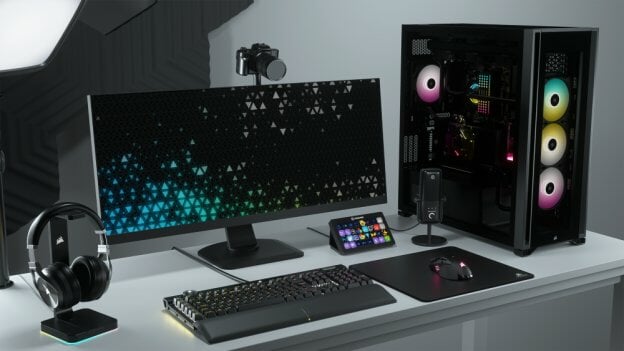 The spacious interior of both 7000 Series cases is optimal for housing the new CORSAIR H170i ELITE CAPELLIX Liquid CPU Cooler. With a massive 420mm radiator, three ML140 RGB PWM fans, and an eye-catching RGB pump head, the H170i ELITE CAPELLIX is the highest performing all-in-one cooler from CORSAIR to-date. Its extreme cooling performance is powered by a low-noise centrifugal pump, generating less than 20 dBA. A split-flow copper cold plate rapidly absorbs heat from your CPU, while the ML140 RGB fans spin up to 2,000 RPM to disperse that heat after it reaches the radiator.

This top-tier performance is complemented by dynamic RGB lighting from 33 ultra-bright, power-efficient CAPELLIX LEDs in the pump head and eight individually addressable RGB LEDs per ML140 RGB fan. With the incredible customization offered by the included CORSAIR iCUE COMMANDER CORE Controller and powerful CORSAIR iCUE software, you can put the spotlight on your cooling. The H170i ELITE CAPELLIX is compatible with almost every modern Intel® and AMD CPU, including LGA 1200, 115X, 2066, and AM4 sockets. 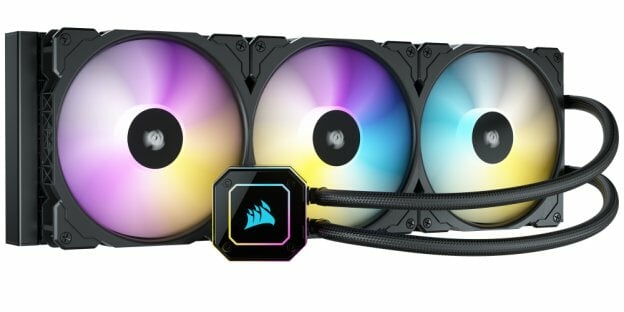 With the launch of the 7000 Series, ORIGIN PC is adding the 7000D AIRFLOW and 7000X RGB cases to its award-winning line of GENESIS custom PCs. Boasting the highest-end hardware, from Intel Core™ i9 and AMD Ryzen™ CPUs to NVIDIA® GeForce RTX™ 30-Series graphics, ORIGIN PC’s GENESIS line of desktops combines superpowered specs with maximum customization, letting you configure your dream PC just the way you want. 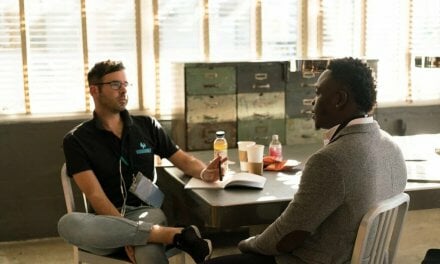 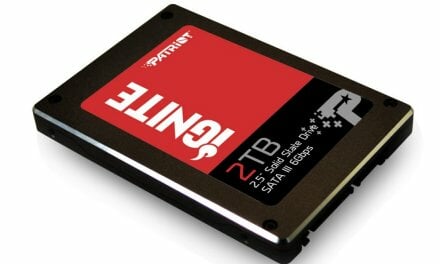 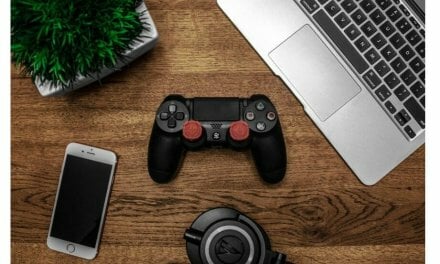 Gadgets, Gaming and Making the Most of Them for Online Casino Gaming