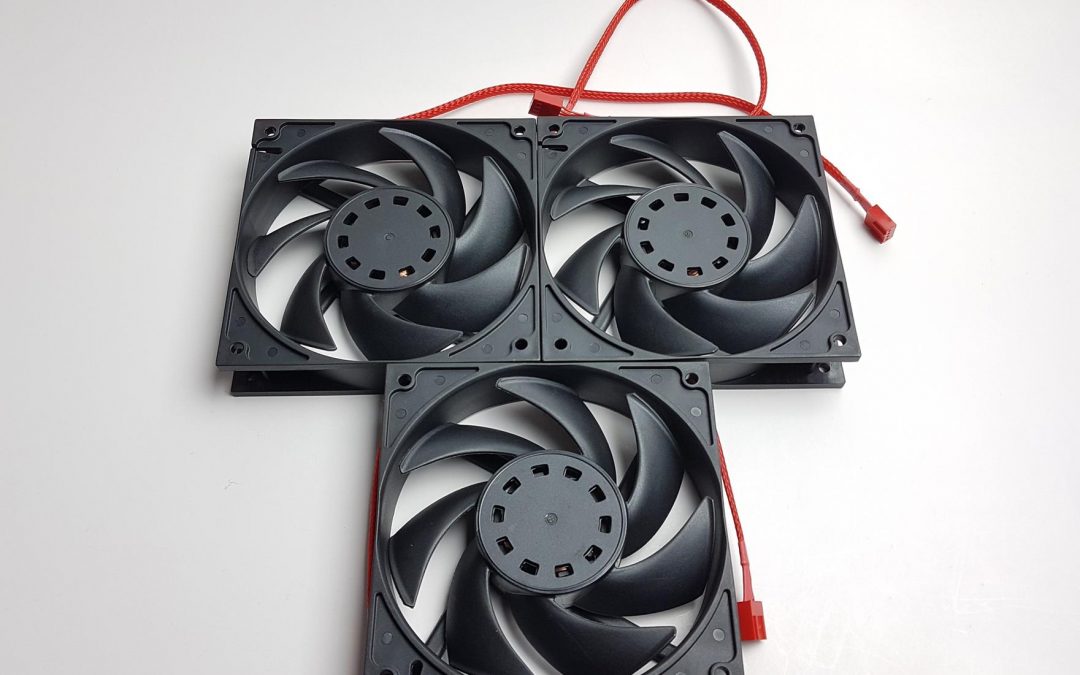 When it comes to liquid cooling, the first name that comes to one’s mind is EK Water Blocks. EK® Water Blocks, the premium liquid cooling manufacturer, bears the name of its founder Edvard König. It all started with the enthusiasm of one man and his ventures with liquid cooling back in 1999. Ever since its inception, the EK Water Blocks has become the premium brand in liquid cooling solutions and this brand is highly popular among the modders, PC Builders, and water cooling enthusiasts alike. Today, the products of EK® are available in more than 30 countries worldwide and the company holds several partnerships with some of the most recognized brands. Not only their products are of high quality but their customer support is up to the bar as well and this is what really matters.

EK Water Blocks has sent us their EK-Furious Vardar EVO 120 fans for the review. Based on their premium Vardar fans, the Extended Range versions come with high static pressure and airflow optimized for enthusiast cooling performance. These fans come with start/stop function Where the fans would stop spinning under certain temperature limit giving the users 0dB silent operations and the fans will kick in as soon as the temperature limit is crossed. These fans have dual-ball bearings rated at 50,000 MTBF. EK Water Blocks has retained the timeless design on EK-Vardar EVO fans making the fans less attention gaining and blending in well with the system’s design and look. These fans are rated for 750~3000 RPM with a static pressure value of 5.81 mmH₂O. 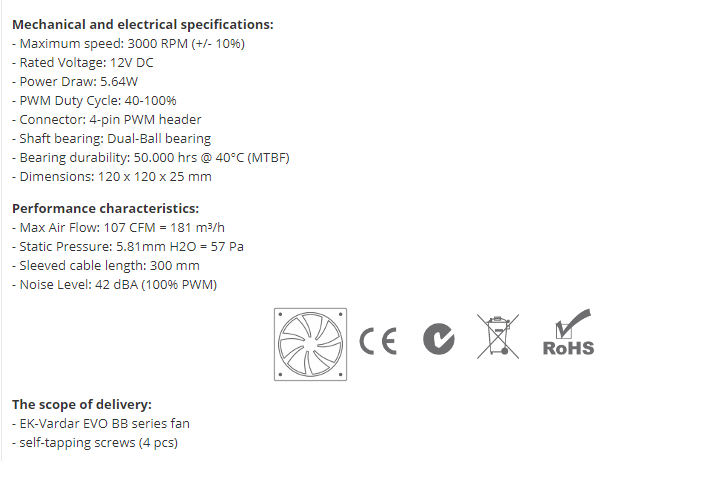 The fans are shipped inside a white color packing box made of paperboard. 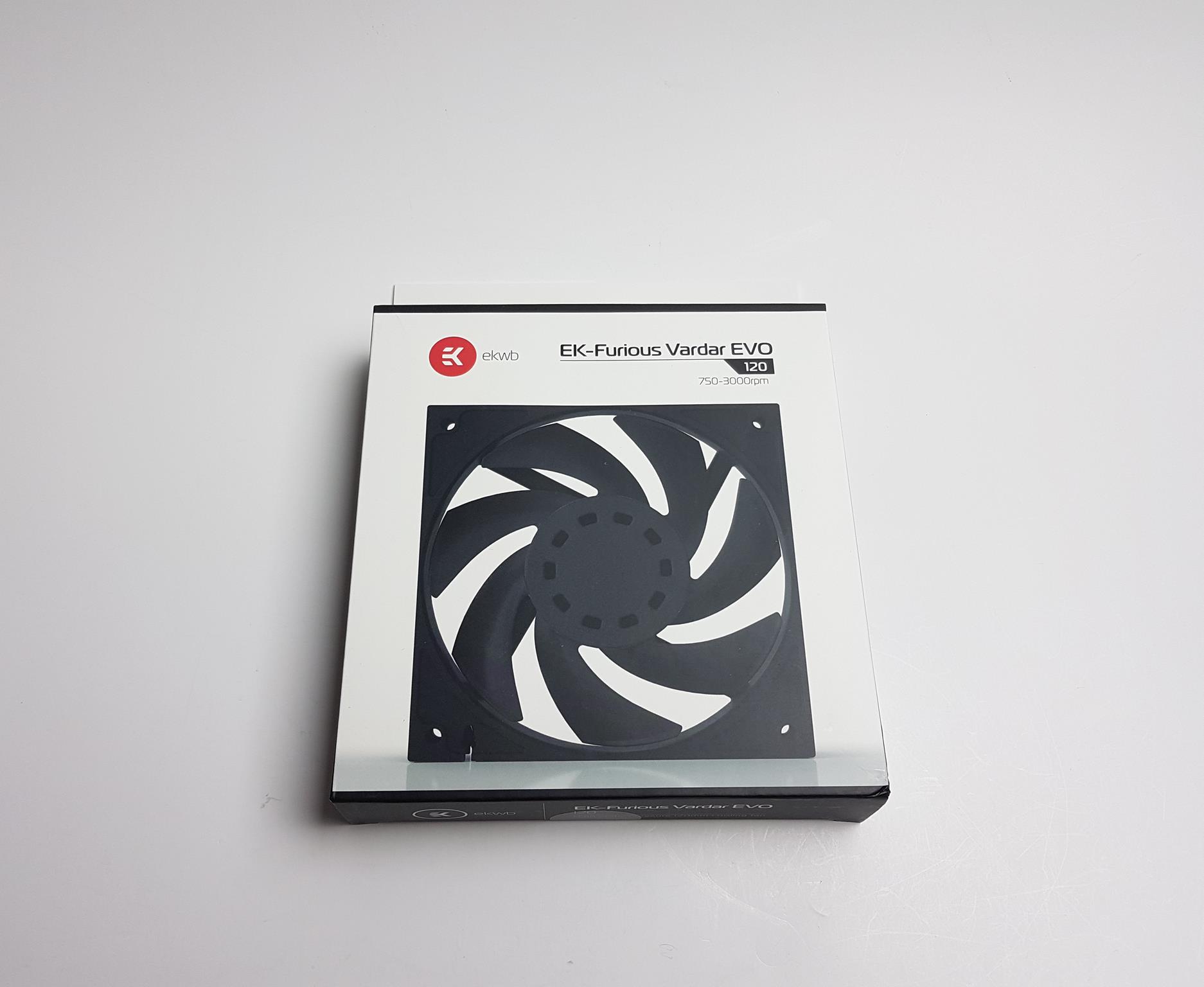 There is a picture of the fan printed in the main section. These are black color edition. EK Water Blocks brand logo is printed up top followed by the model of the fan. These fans have rated speed of 750~3000 RPM. 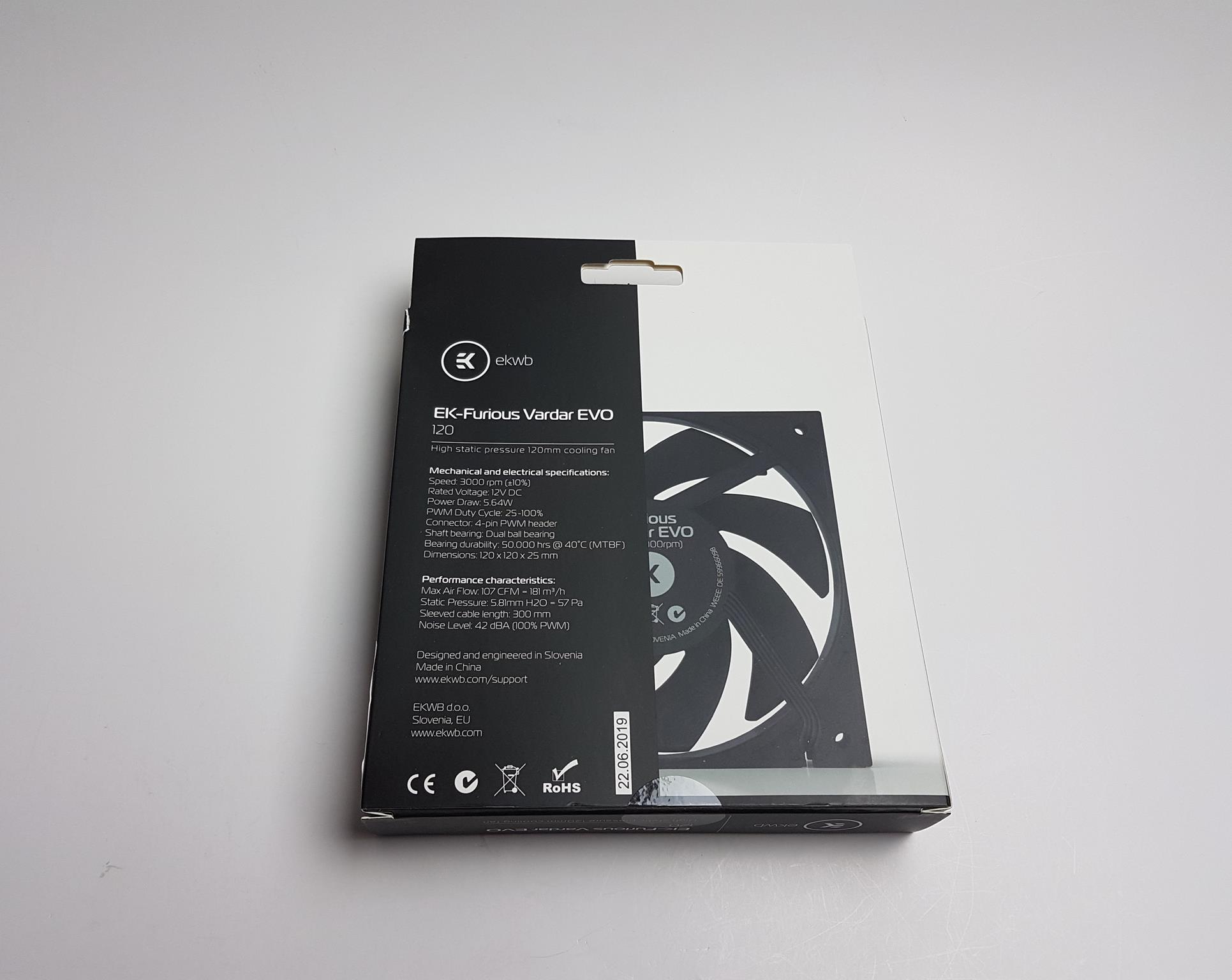 The specifications of the fan are printed on the left side. The other half side has the fan’s picture printed on it. 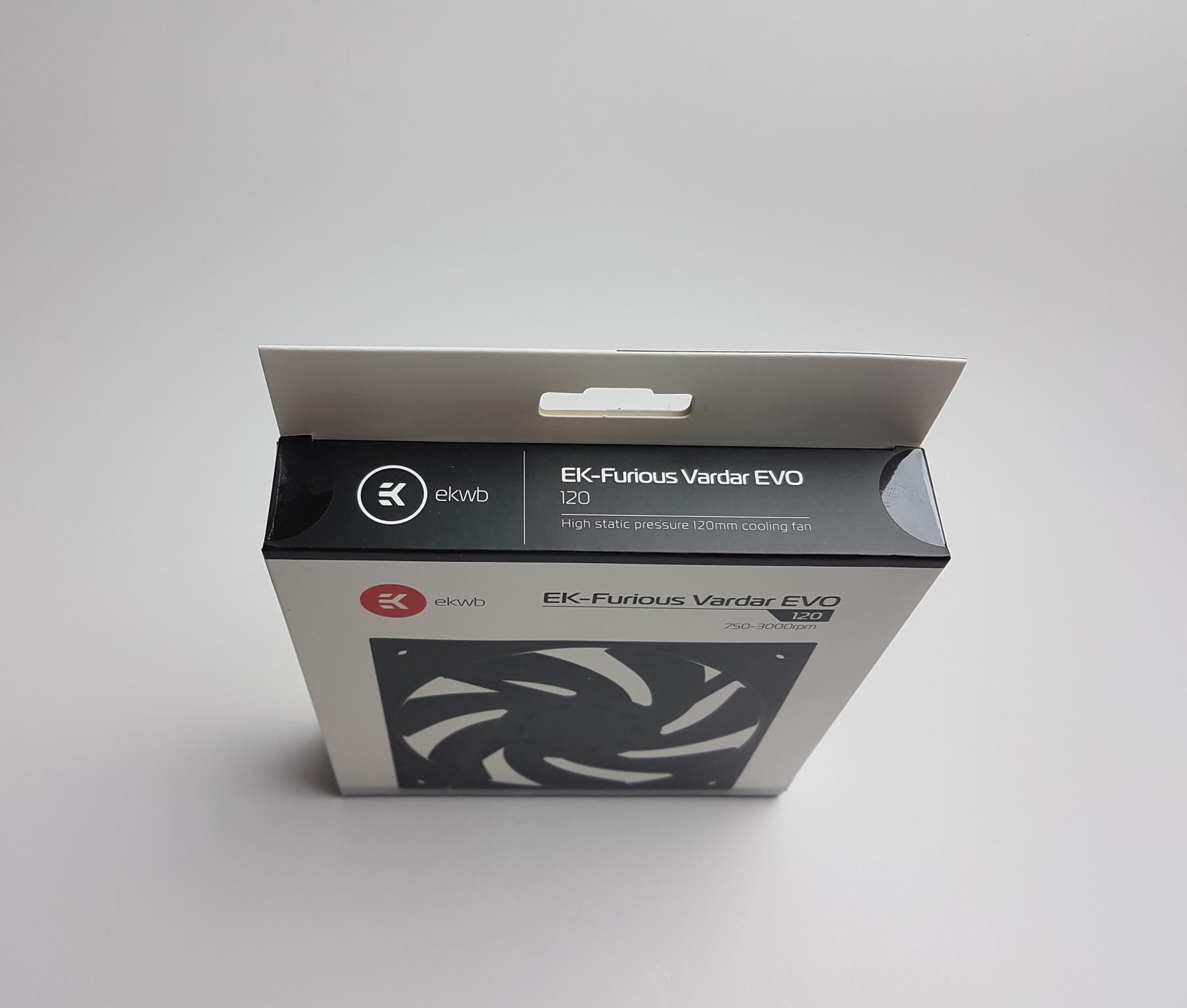 The fan’s model is printed along with the EKWB brand logo. 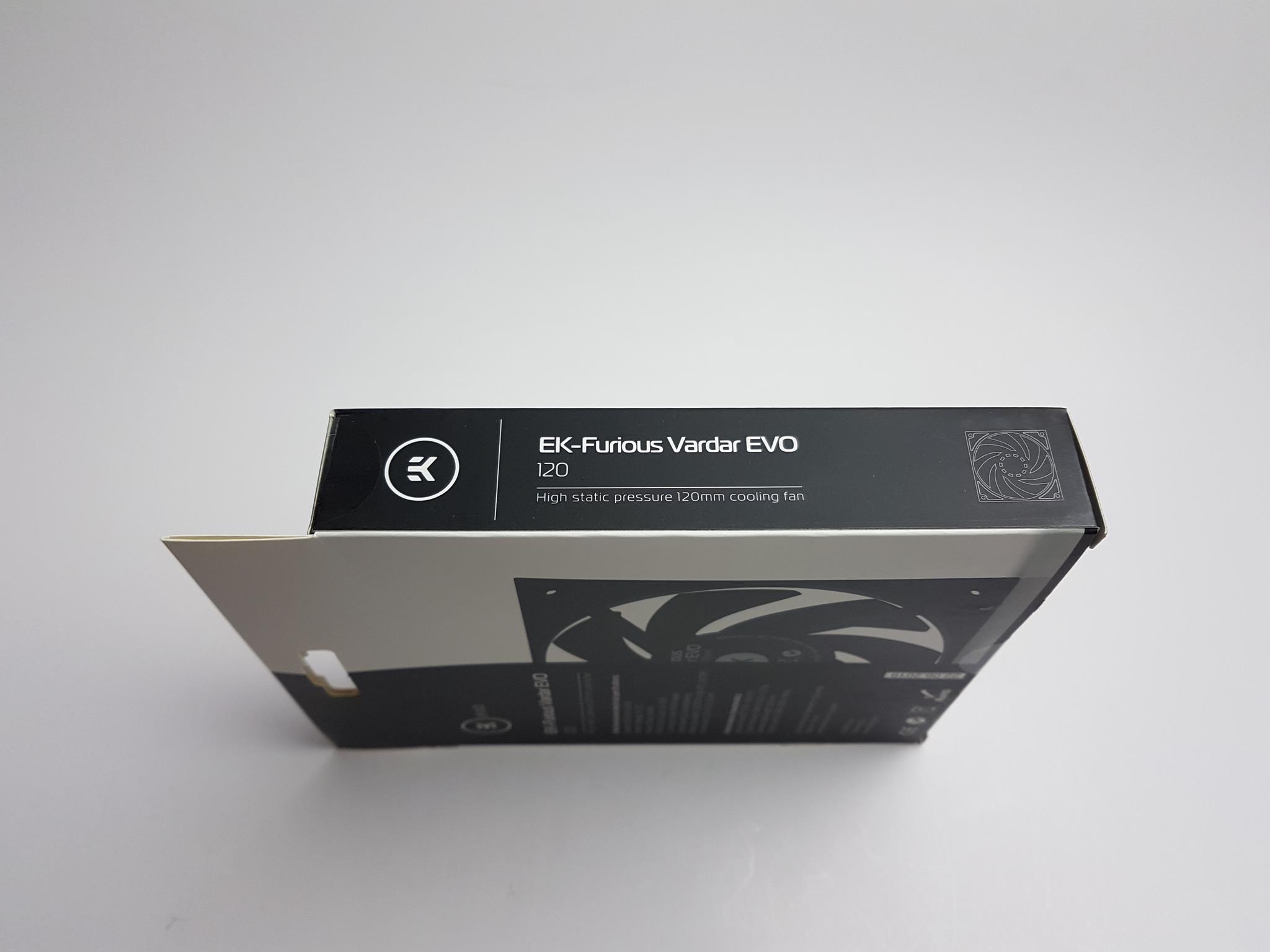 The fan’s model and an illustrative picture are printed along with the EKWB brand logo. 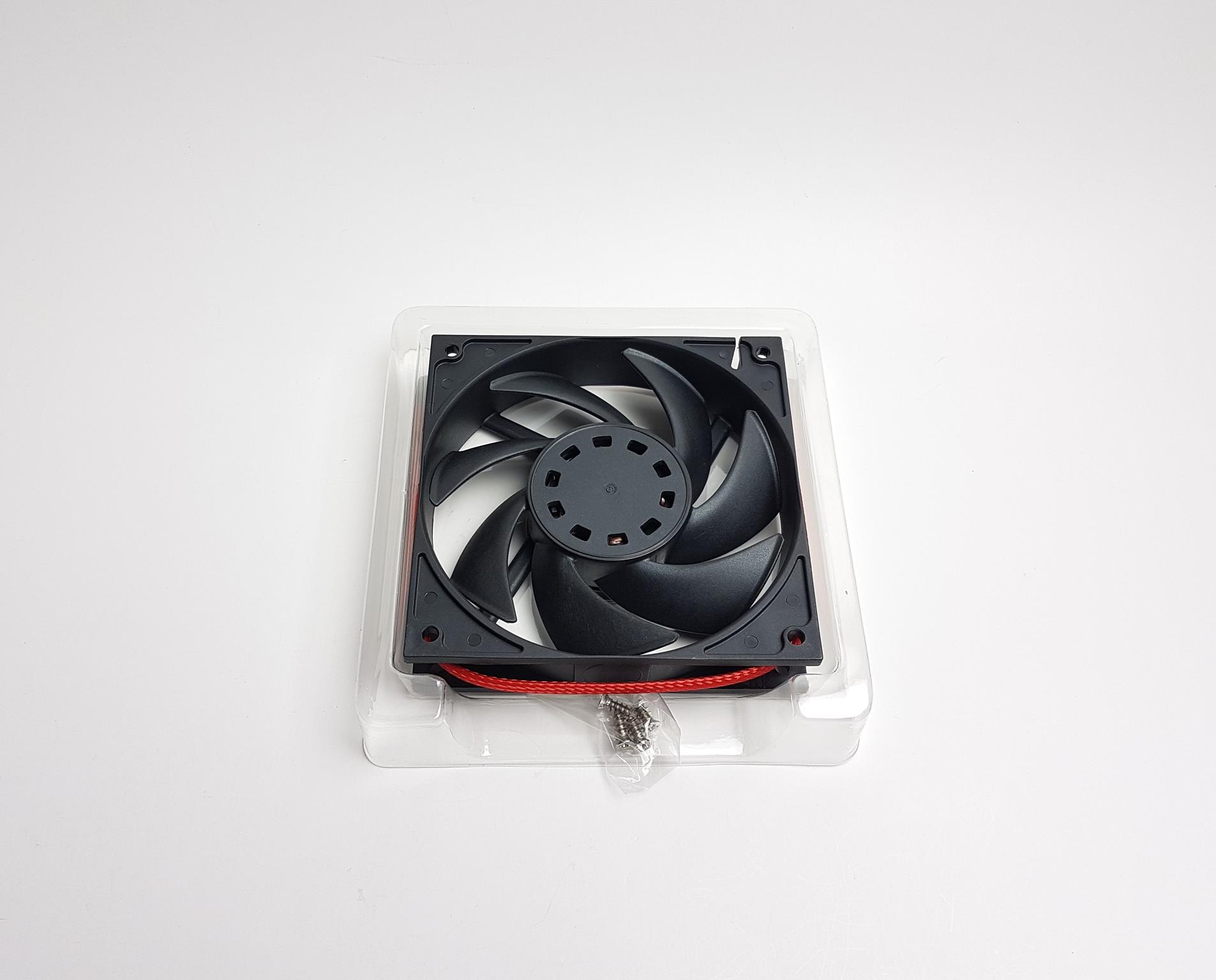 The fan is placed inside a transparent container along with the screws.

The EK-Furious Vardar EVO 120 BB fans are based on EK Water Block’s premium EK Vardar fans extended into Vardar EVO with extended PWM range. The EK-Furious Vardar EVO 120 BB fans are optimized for enthusiast cooling performance without any compromise as these come with high static pressure and high airflow with a wonderful feature of fan stop/start where the fan would stop spinning under certain load and temperature limit to give 0dB silent operations. The fans would start spinning as soon as the set temperature value. 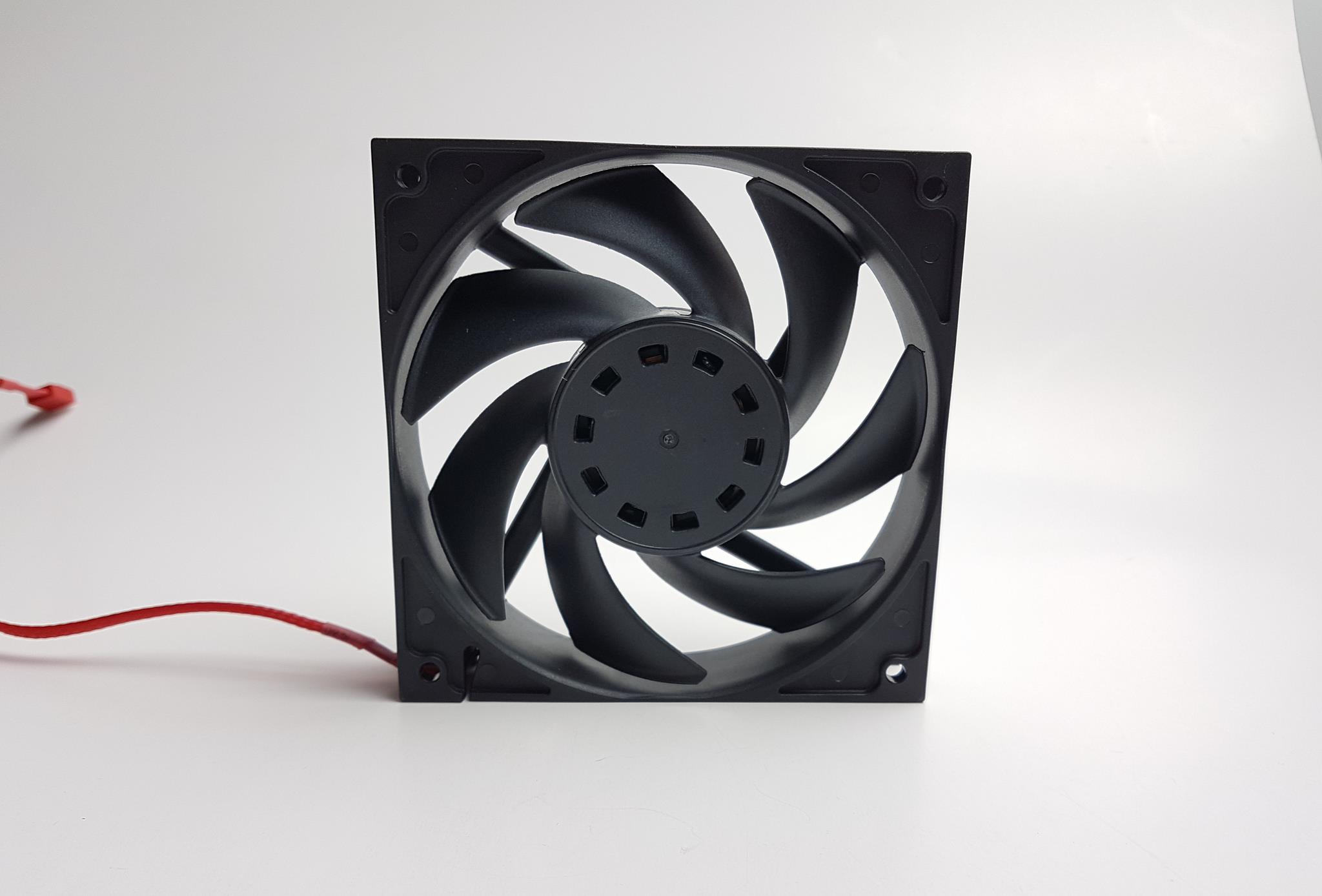 The naming convention of VARDAR has its roots in the ravine wind flowing down the gap of Moravia-Vardar where the wind flow is enhanced through the channeling effect of the region bringing cold conditions from the north to the Thessaloniki area of Greece. Most frequent during winter, it is blowing in the rear of a depression when atmospheric pressure over eastern Europe is higher than over the Aegean Sea.

Let’s take a closer look at the fan design starting with the specifications: 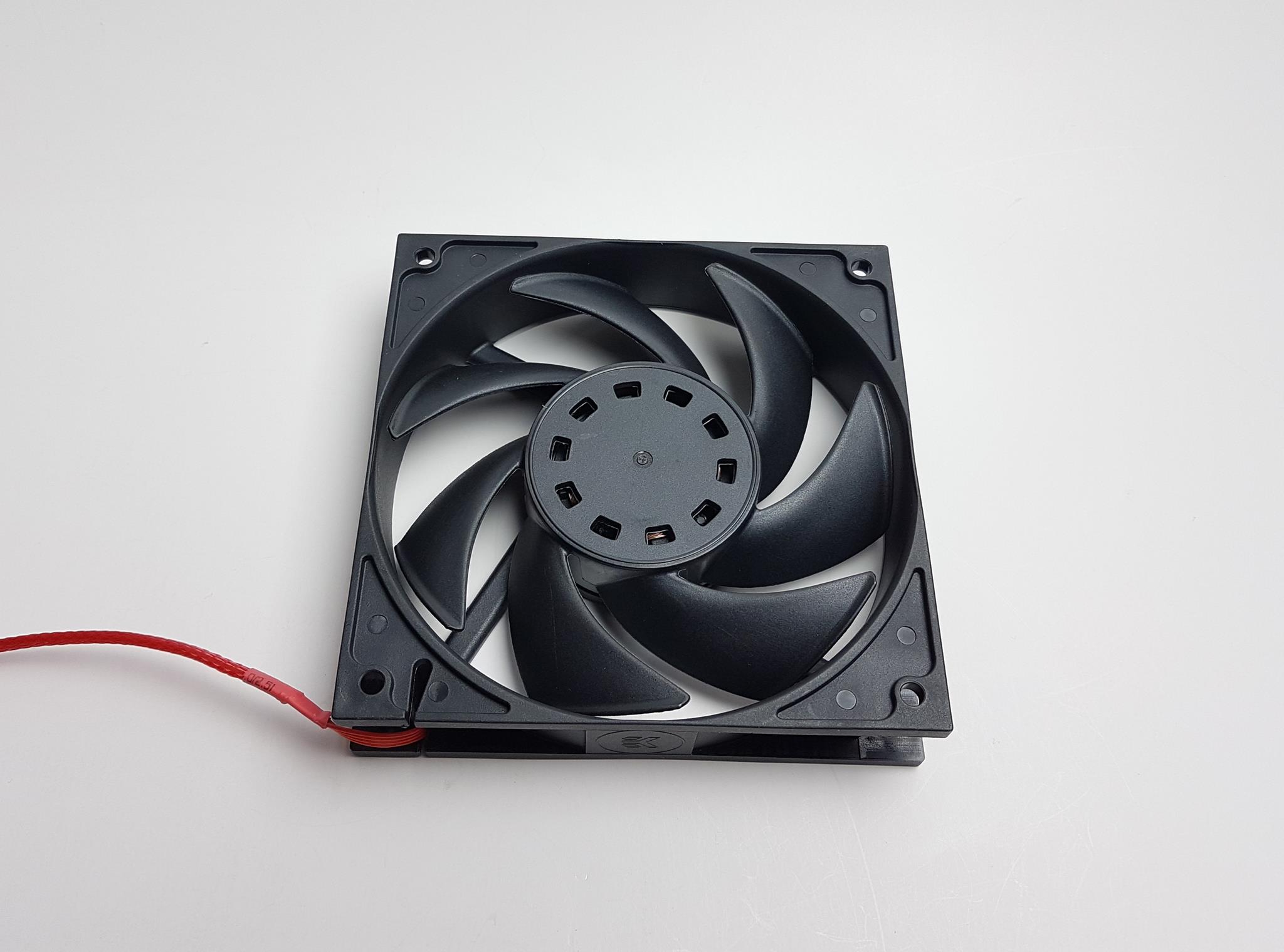 The EK-Furious Vardar EVO 120BB fans have the sealed-edge square casing/frame. The frame is made of hard plastic and is durable. It is in the matte black color. The frame is designed to aid in avoiding the hydraulic losses. Each fan has 7 blades. The outer edge of each blade has a raised surface which helps in ensuring the high airflow and noise reduction. There is no anti-vibration rubber pad on any mounting corner. Though these fans are designed primarily for radiators in water cooling arena, the user can still use them on the air coolers as well as for PC Chassis fans particularly where the restriction to the airflow is high like on the front with dust filter as the high static pressure rating of these fans make them ideal for any such scenario/use. There is a distance of 110mm between any two mounting holes including the area of the holes. The fan has a longer diameter center measuring 51mm. There is no sticker pasted on the center. 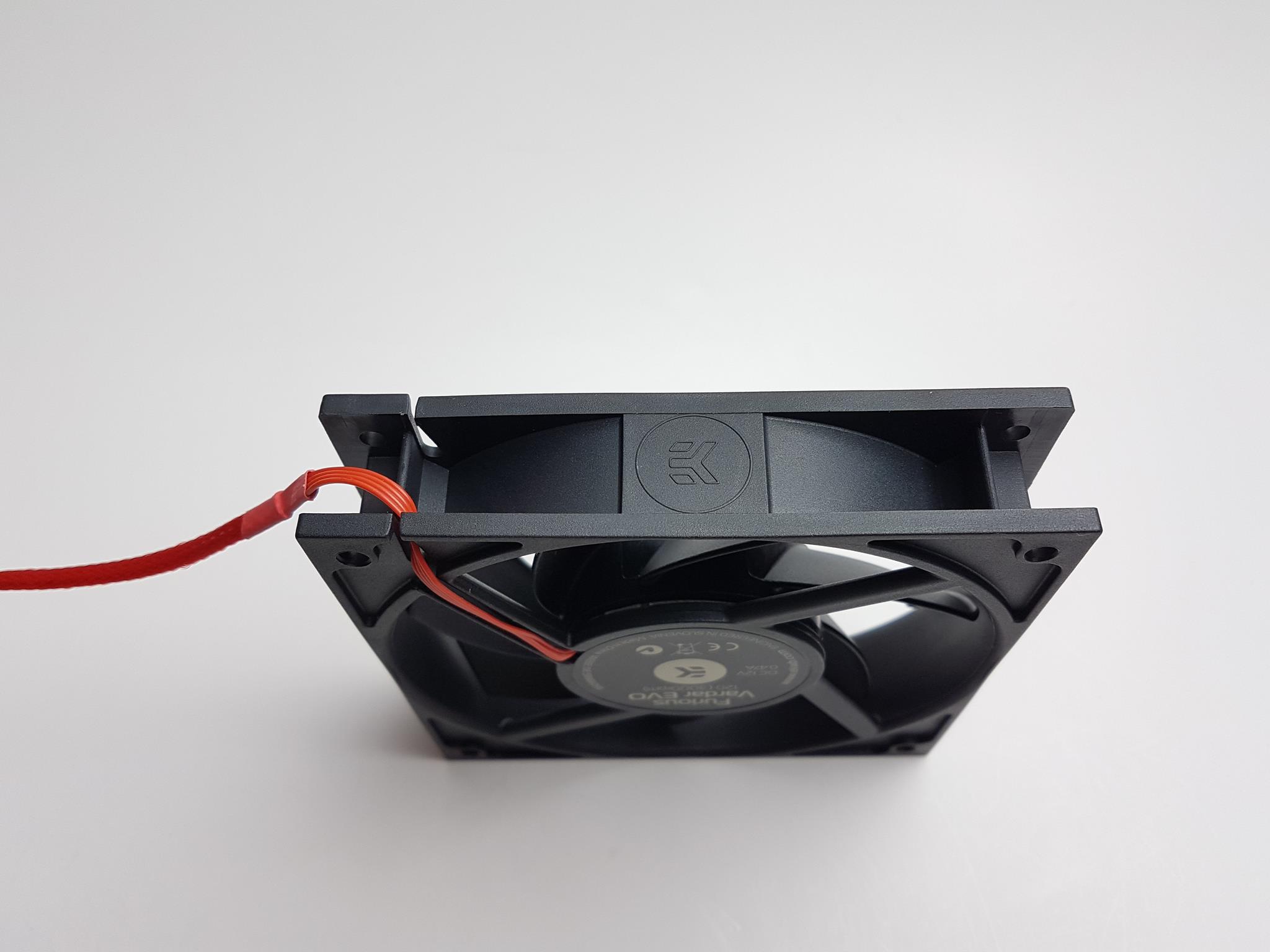 There is EKWB brand logo embossed on the sides of the fan’s frame. 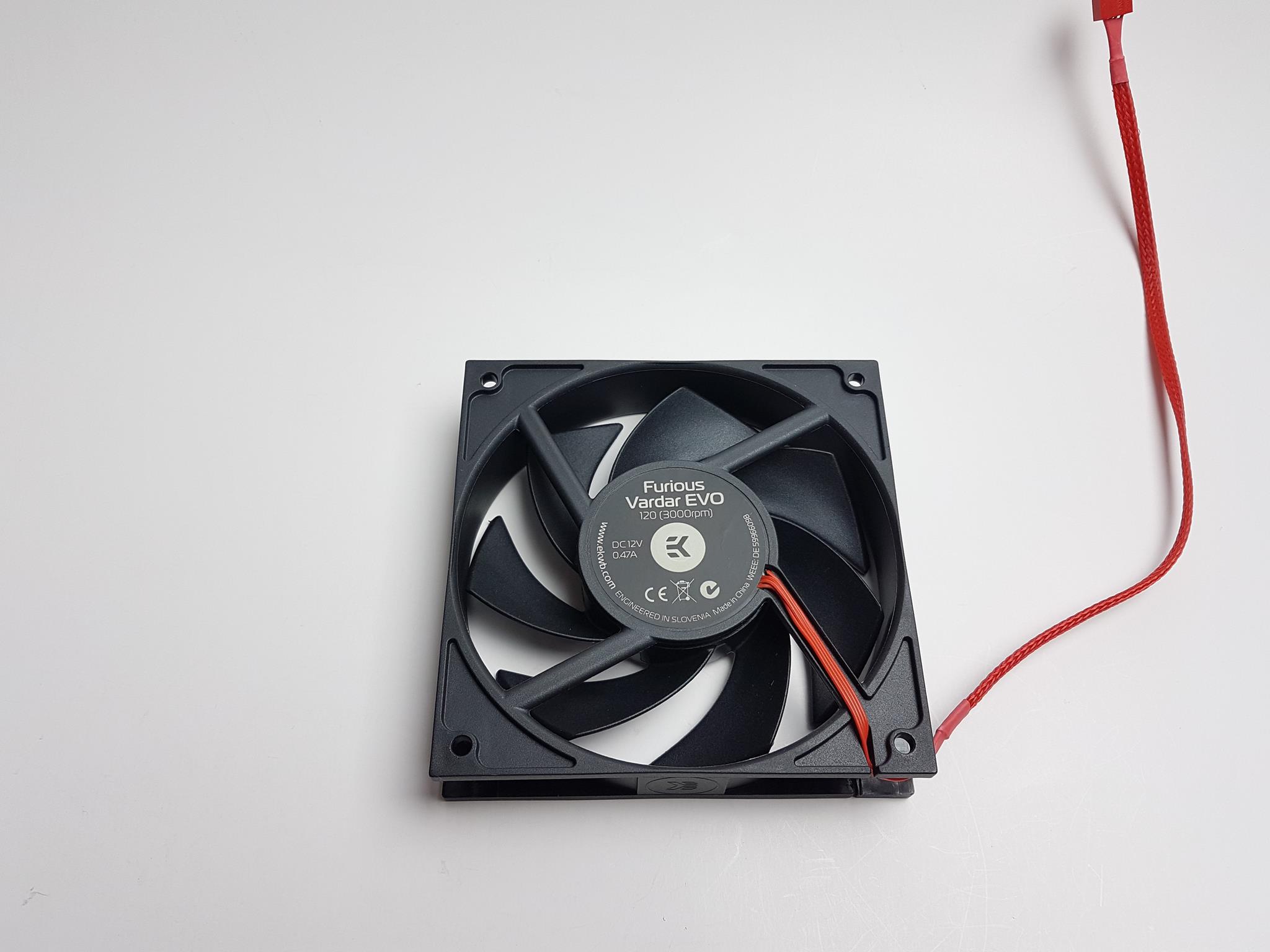 Looking at the backside of the fan, one can spot a 4-arms assembly securing the fan motor and blades to the frame. One of the arms is wider and has an inset to form a channel through which the wires are routed. The use of red color power cable seems strange given the very fact that the overall design of the fan is timeless and designed for a stealth look. Personally, I like this combination! There is a sticker pasted on the center with the power rating of the fan. The fan is designed in Slovenia and made in China. The EK-Furious Vardar EVO 120 BB fans are using new electrical design, actively cooled motor windings and the Dual-Ball bearing with 50.000 hours of lifespan (MTBF) at 40°C. Precise Pulse Width Modulation (PWM) for fan speed adjustment allows performance on demand. 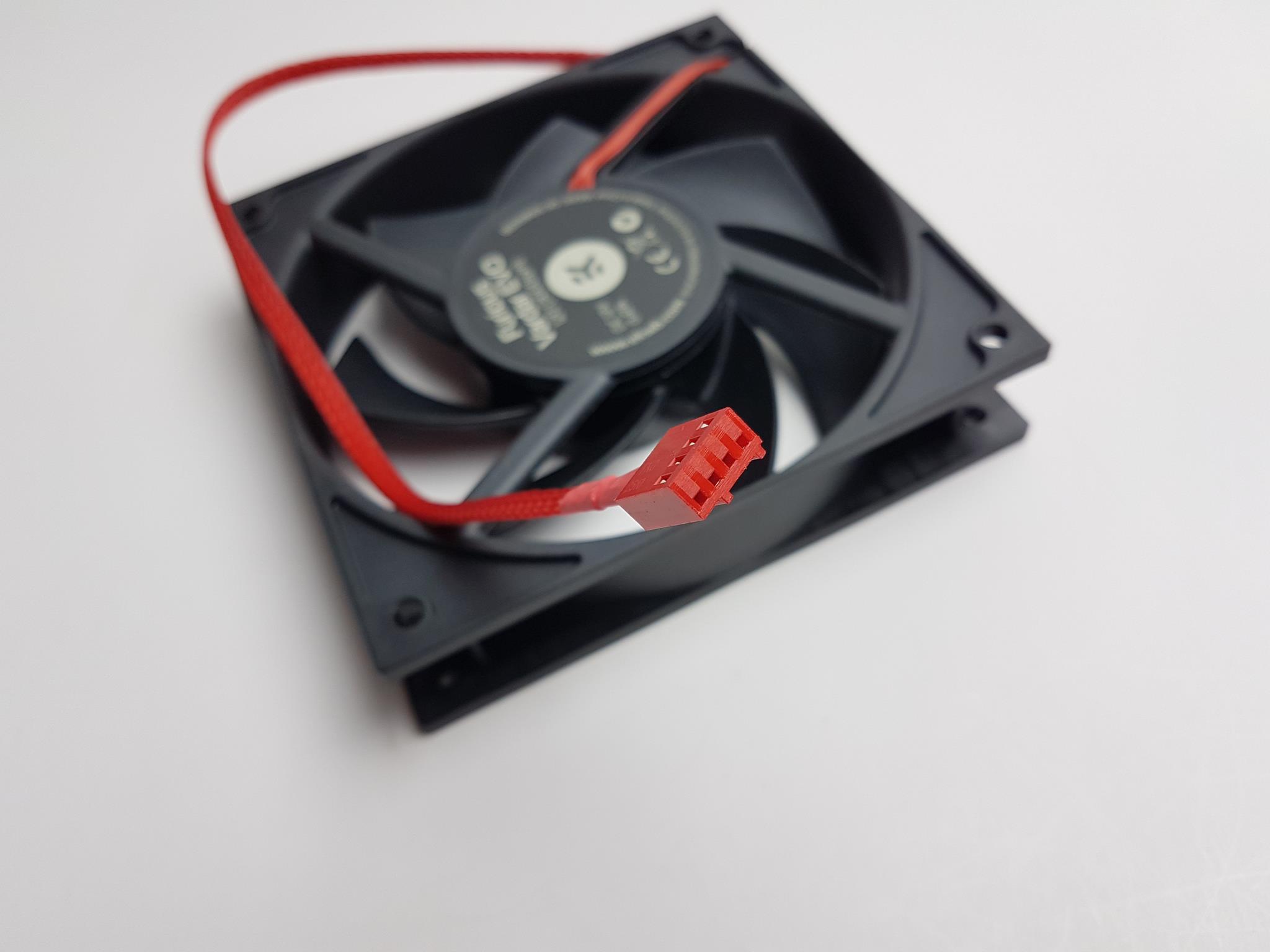 The EK-Furious Vardar EVO 120 BB fans have a 4-pin PWM cable connector. The length of the cable is 300mm and it is in red color sleeving. Personally, I prefer the flat cable as it helps better in cable management. 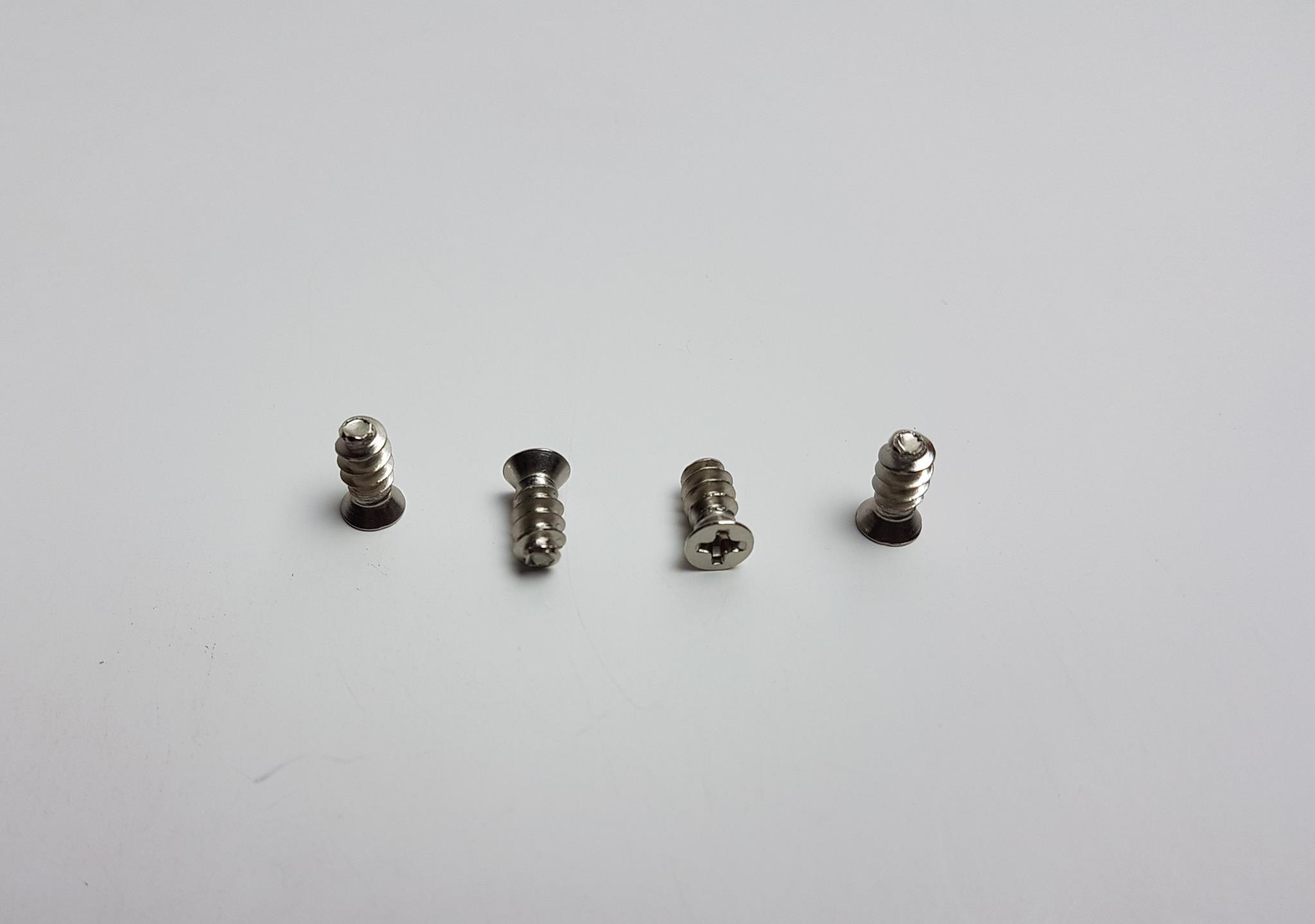 There is one special feature without which the design section can’t be completed. It is called the 0dB Regime. EK-Furious Vardar EVO 120 BB fan features a Start-Stop function which ensures the user a true 0db noise environment. Please, note that this function is dependent upon the provision in the UEFI/BIOS of the motherboard. If the motherboard’s PWM controller does not support the stop/start function then the user would not be able to use this feature. Please, refer to the manual of the motherboard for more details. In order to use this feature, a fan curve is needed to be set with the minimum threshold point below 25-30% PWM cycle. As soon as the set condition is met the fan will stop spinning as the electronics of the fan will turn off. The fan will restart the operation automatically as soon as the set condition of the threshold is crossed. This feature not only helps in prolonging the life of the fan but also gives the user a silent level operation.

Following testbed configuration has been used to test these fans:

The following software were used for testing and monitoring.

We are using Noctua NT-H1 as a standard thermal paste for testing of the coolers and the fans. The use of the same thermal paste for all coolers will ensure the standardization and mitigate any performance benefit that may come using the supplied thermal paste. Delta temperatures are reported on the graphs. Delta is calculated by subtracting the ambient temperature from the average of each core’s max temperature reading. The testing is done on an open-air bench system. Once inside the chassis, the temperatures are expected to rise and would largely depend upon the optimal airflow inside the chassis.

The Intel i7 6850k was overclocked to 4.3GHz for this testing. For comparison, I decided to use the Noctua NF-F12 iPPC 3000-PWM fans. The reason for this selection is obvious as both fans have high static pressure and airflow ratings with almost similar specifications except the electronics and bearings.

The fans were tested at 50%, 100% of the PWM duty cycle with controlling the speed through the PWM regulation in the UEFI/BIOS. The PerfectPrime WD9819 Anemometer was used to measure the airflow reading of the EK-Furious Vardar EVO 120 BB fans. Fonseo Digital Sound Level Meter was used to measure the acoustic performance of the fans. Let’s start taking a look at the results. 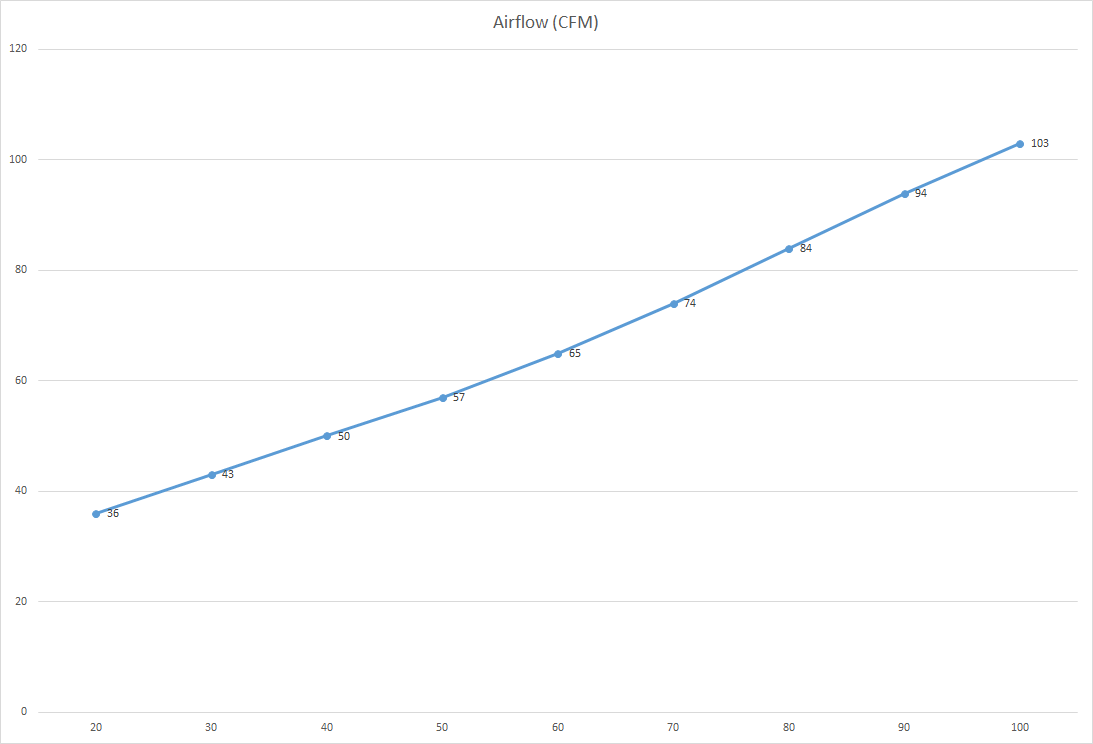 As per our measurement with Anemometer placed roughly 3 inches away from the fan without anything in between, the maximum airflow reading comes to 103 CFM at full PWM cycle. 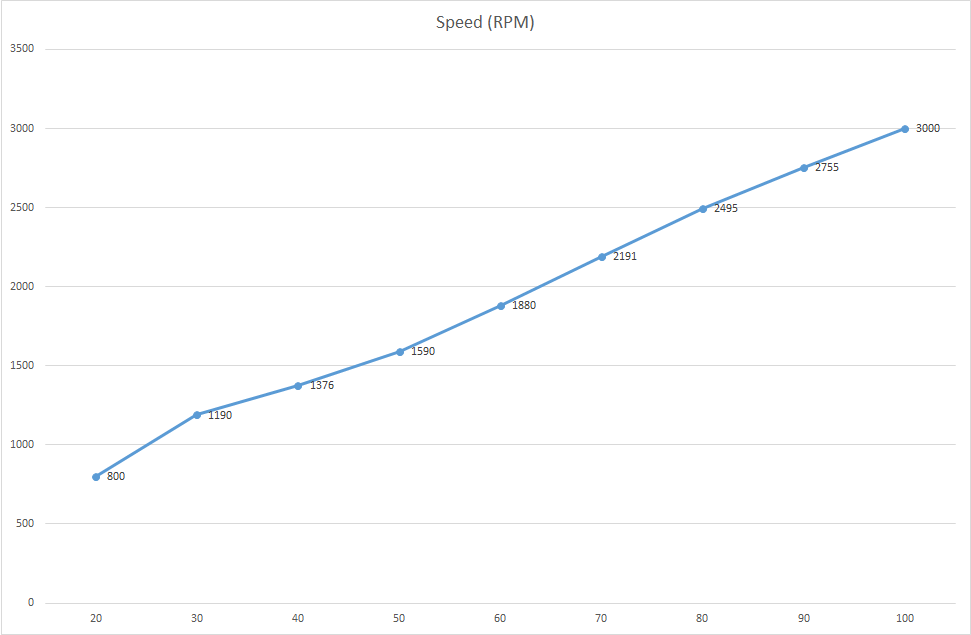 The minimum speed observed on either of EK-Furious Vardar EVO 120 BB fans is 800 RPM at a 20% PWM cycle. All three fans reached/crossed 3000 RPM at 100% PWM cycle. One of the EK-Furious Vardar EVO 120 BB fans started making a strange rattling sort of noise at a lower PWM duty cycle of 40% and below. This was not observed on the other two fans. Another interesting observation is the large variation in the speed at any given PWM duty cycle. Like in one case setting the PWM cycle at 50% saw one fan doing a minimum of 1510 RPM to a maximum of 1860 RPM with rapid bursts in the speed as the fan was speeding up quickly and then slowing down. This makes it difficult to read the exact speed at the given PWM duty cycle. The same trend was observed on the Noctua fans. This trend diminishes with higher PWM cycles. The fans were connected to the HiAmp PWM header of the motherboard (3A rated). To validate this observation, the fans were tested on other PWM header as well. 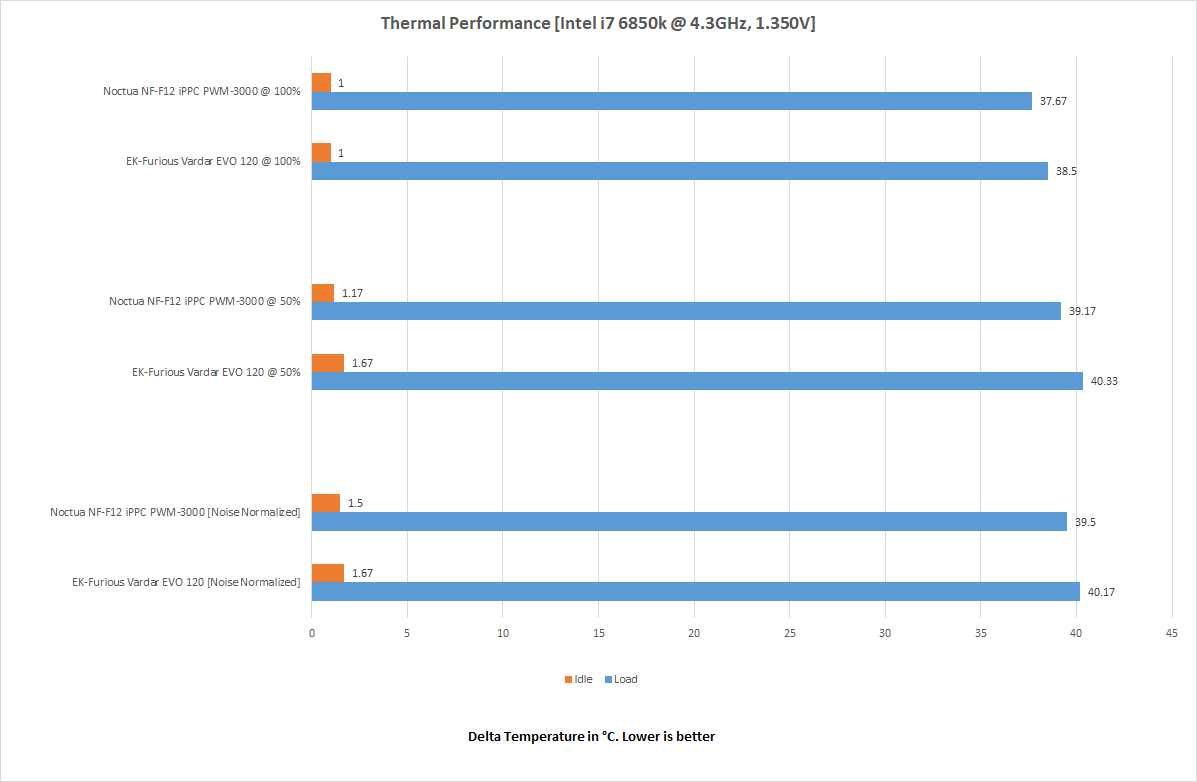 The EK-Furious Vardar EVO 120 BB fans are industrial grade high static pressure fans designed specifically for use on the radiators in the water cooling loop though their use is not limited to this purpose only as the user can use these fans on the air coolers as well as in the PC Chassis where there is more resistance to the airflow. The high static pressure rating of 5.81 mmH₂O coupled with the high airflow rating of 107 CFM makes these fans ideal for such scenarios.

The dimension of these fans is 120x120x25mm. The fans have rated a PWM duty cycle of 40~100% with a rated maximum speed of 3000 RPM ±10%. The power rating is 5.64W at 12VDC. The noise level is rated at 42 dBA. These fans are using double-ball bearings and have a lifespan of 50,000 MTBF at 40°C. The EK-Furious Vardar EVO 120 BB fans have a red color sleeve cable with a 4-pin PWM connector. The length of the cable is 300mm which in my opinion is not enough for direct connectivity to the motherboard PWM headers depending upon the distance between the fans and the control source.

The EK-Furious Vardar EVO 120 BB fans feature a unique stop-start function which makes the fan stop spinning at set threshold duty cycle and temperature. When the set threshold is crossed, the fans will start spinning automatically. This feature called 0dB Regime gives the user a silent level of operation under no load. Please, keep in mind that the PWM controller on the motherboard must support this function otherwise it won’t work. The EK-Furious Vardar EVO 120 BB fans have a square design black color frame to avoid hydraulic losses. Each fan has 7 blades. Each blade’s end has a raised surface to enhance the airflow and reduce the noise turbulence. The EK-Furious Vardar EVO 120 BB fans feature a new electrical design, actively cooled motor windings and the Dual-Ball bearings to provide the rated performance level. The overall design of the fan is timeless making them a perfect candidate for a stealth build.

We are thankful to EK Water Blocks for giving us the opportunity to review their EK-Furious Vardar EVO 120 BB fans.