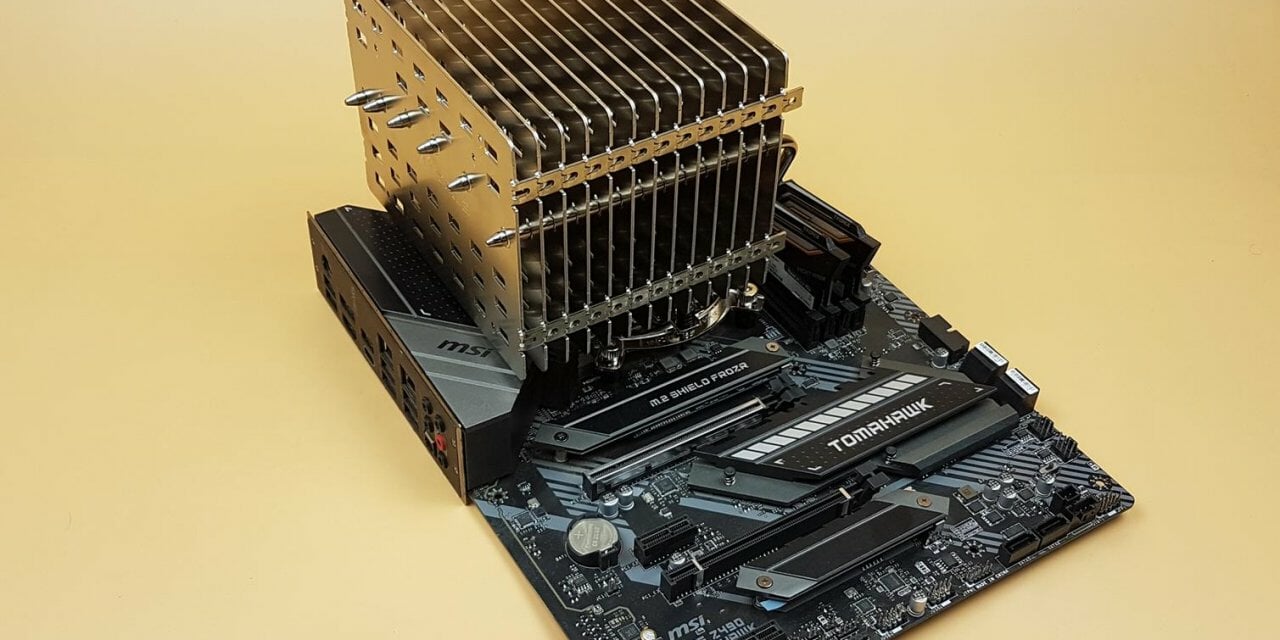 Noctua originates from a collaboration between the Austrian Rascom Computerdistribution Ges.m.b.H. and the Taiwanese cooling specialist Kolink International Corporation, pooling more than thirty years of experience in the development, manufacturing and marketing of high-end cooling components. Established in 2005, Noctua took international silent enthusiasts’ hearts by storm and quickly developed into one of the most acclaimed suppliers of premium quality quiet cooling products. Today, Noctua is present in more than 30 countries across the globe and working with several hundred sales partners. Chosen by noise-conscious PC users, system integrators and industry clients alike, Noctua has become synonymous with impeccable quality, excellent customer service and class-leading quiet cooling performance.

Noctua has released the passive cooling solution in the form of gigantic heatsink named NH-P1. We have a soldered assembly of thicker fins with 6x coated copper heat pipes. The heatsink itself is not dense which is obvious as we need to move air freely through the heatsink without using active cooling component aka fan. The cooler is suggested for use in the enclosures having natural convection of airflow with the obvious criteria of meeting the 0 dB noise output. The user has the option to fit NF-A12x25 LS-PWM fan on the heatsink depending upon the requirement. The minimum rotational speed of the fan is 450 RPM hence the user can tailor the PWM curve of the fan so that fan can kick in only under certain load and remains at lowest rated RPM otherwise. Noctua has provided NT-H2 thermal paste with the cooler which is a wise move. In our testing, we have found NT-H2 giving 2~3°C off as compared to the NT-H1 which is a regular feature in all other Noctua coolers. Integrating NT-H2 with a passive cooler would come in handy. The cooler is compatible with all major sockets from both camps excluding the AMD TR4 socket. The eye attraction is the provision of gripped screw driver named NM-SD1. We are seeing Torx-based multi-socket mounting hardware called SecuFirm2+

*These prices are MSRP. 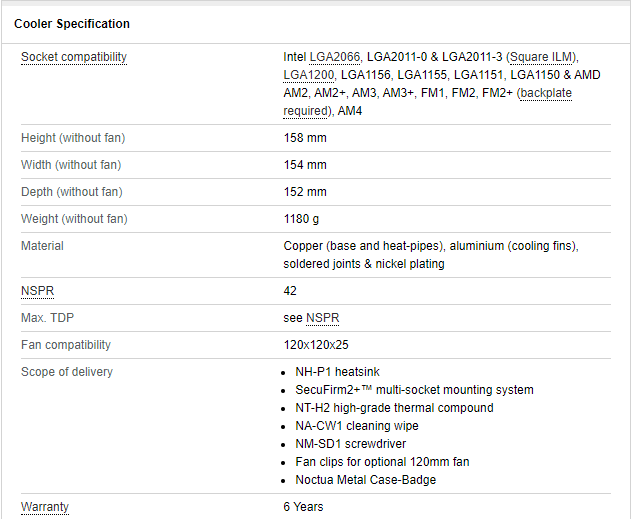 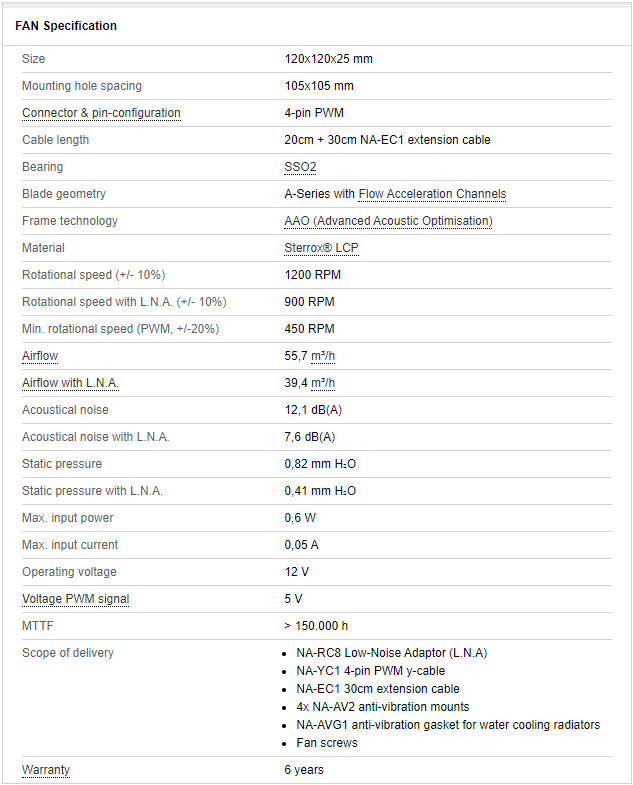 The packaging theme and style is the same as we have seen on Noctua’s other coolers. NH-P1 is a passive cooler for high-end CPUs. I would strongly suggest checking the compatibility notes on the Noctua’s website for given CPU. The cooler is compatible with Intel LGA-1200 and AMD AM4 sockets in addition to support for other listed sockets. The heatsink has asymmetrical design for better PCIe compatibility. 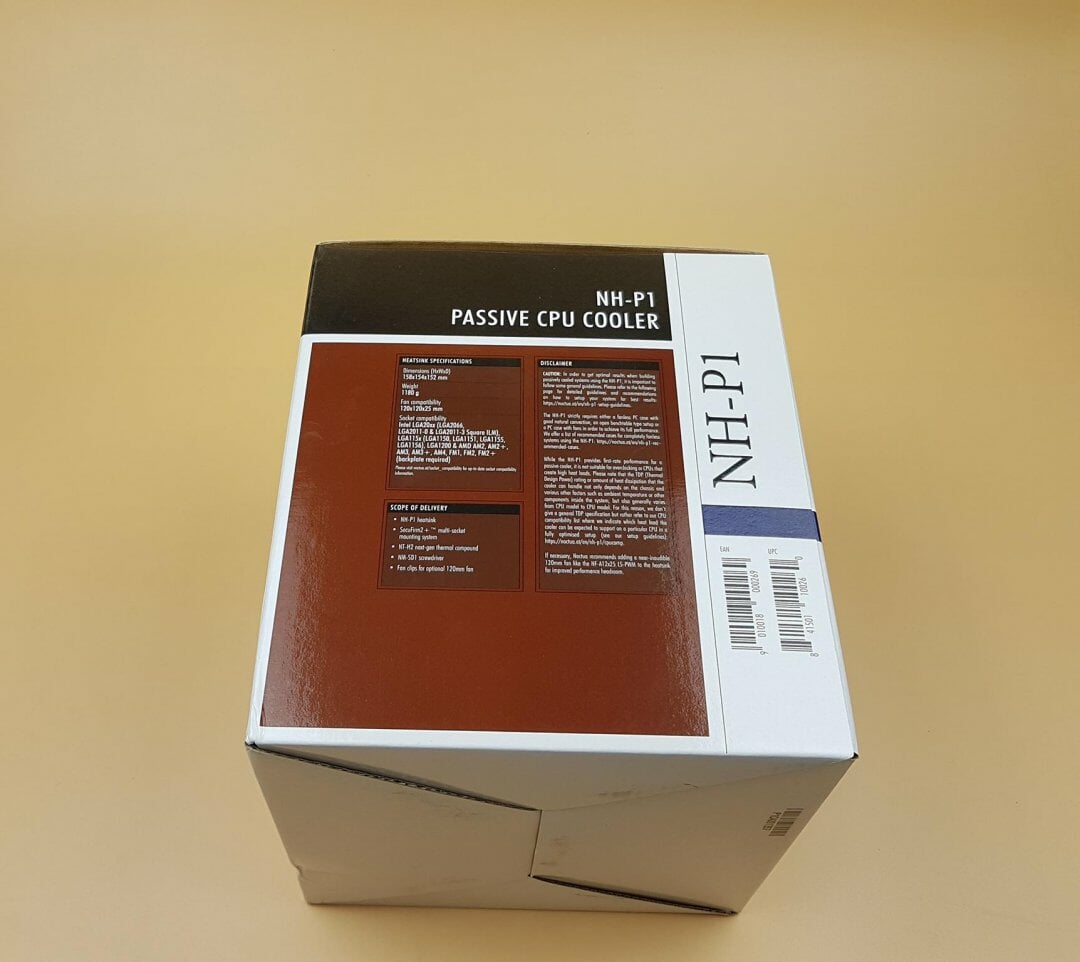 The specifications of the unit and the packing list are printed here in addition to the EAN and UPC labels. 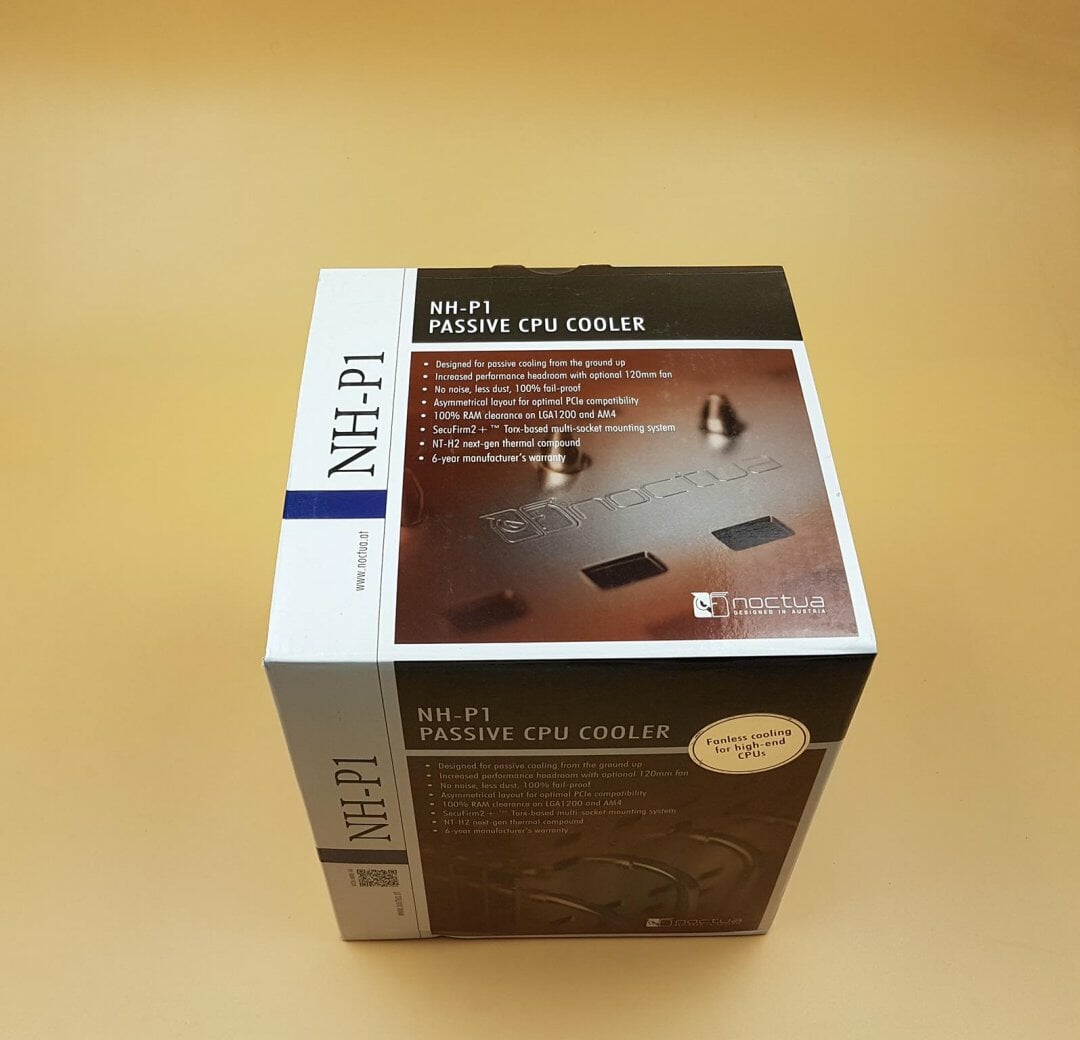 The top cover has the same listing as we have seen on the front of the packing box. 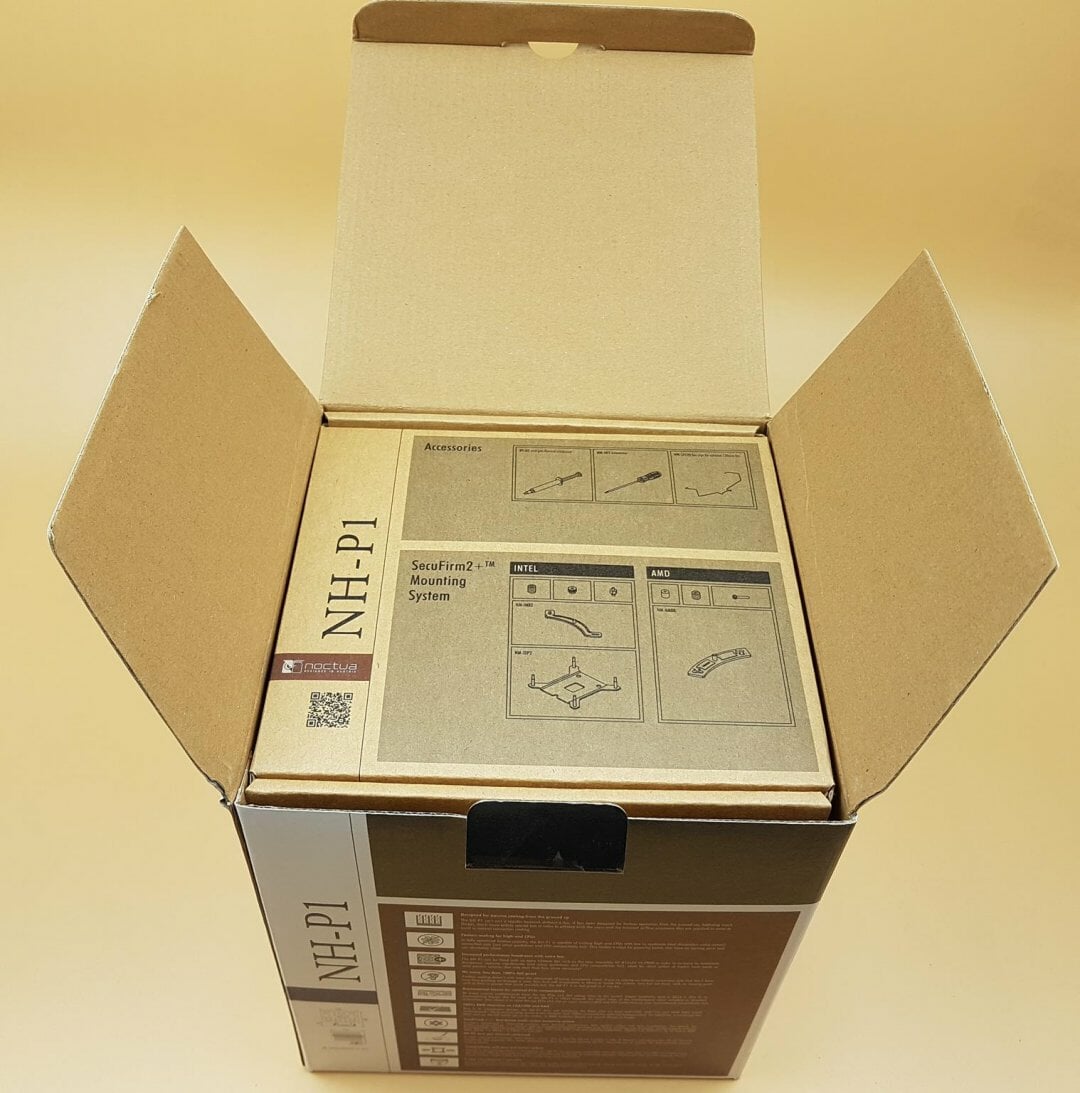 There is an accessory box placed on the top of the cooler. 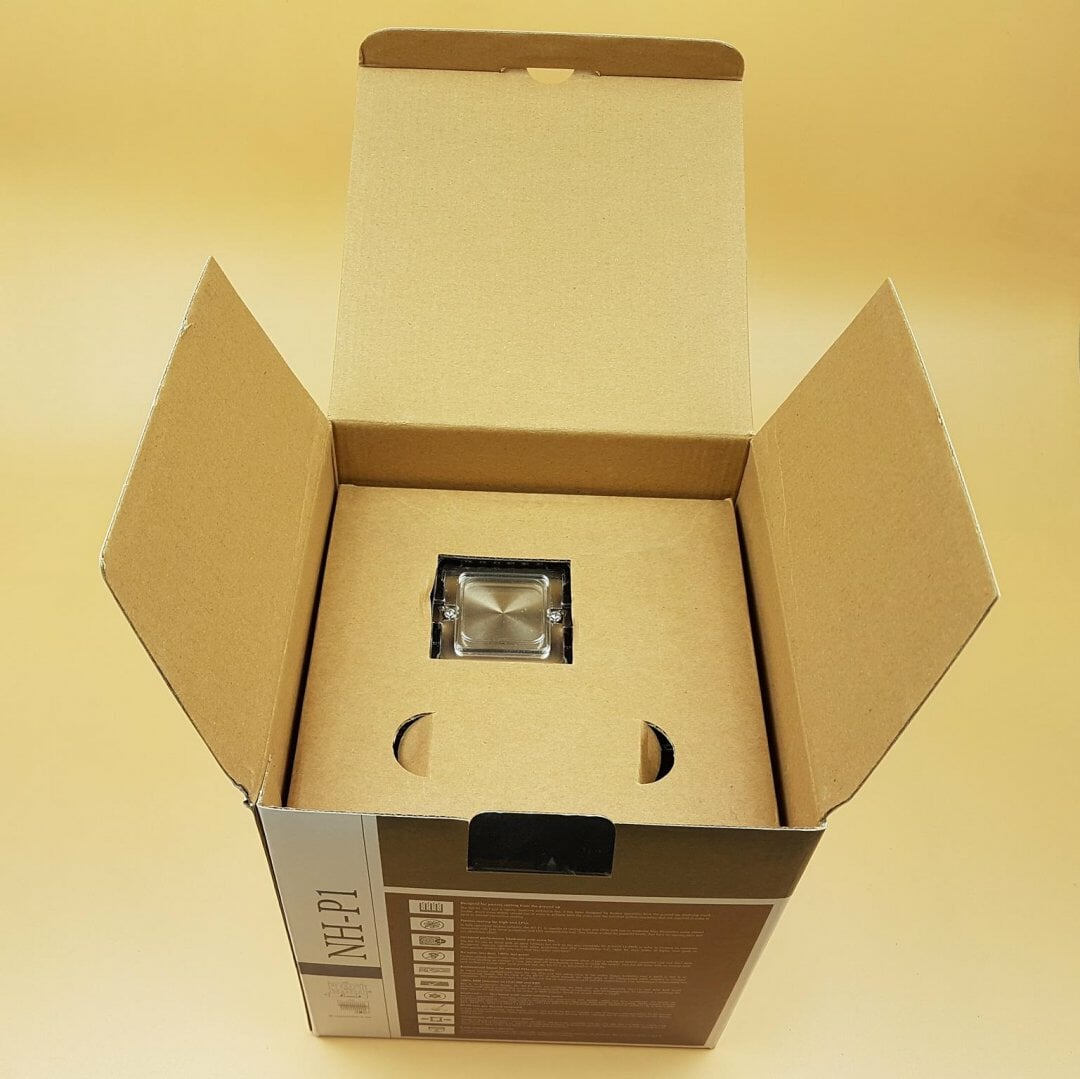 Removing the accessory box would show the base of the cooler nicely packed inside cardboard box. 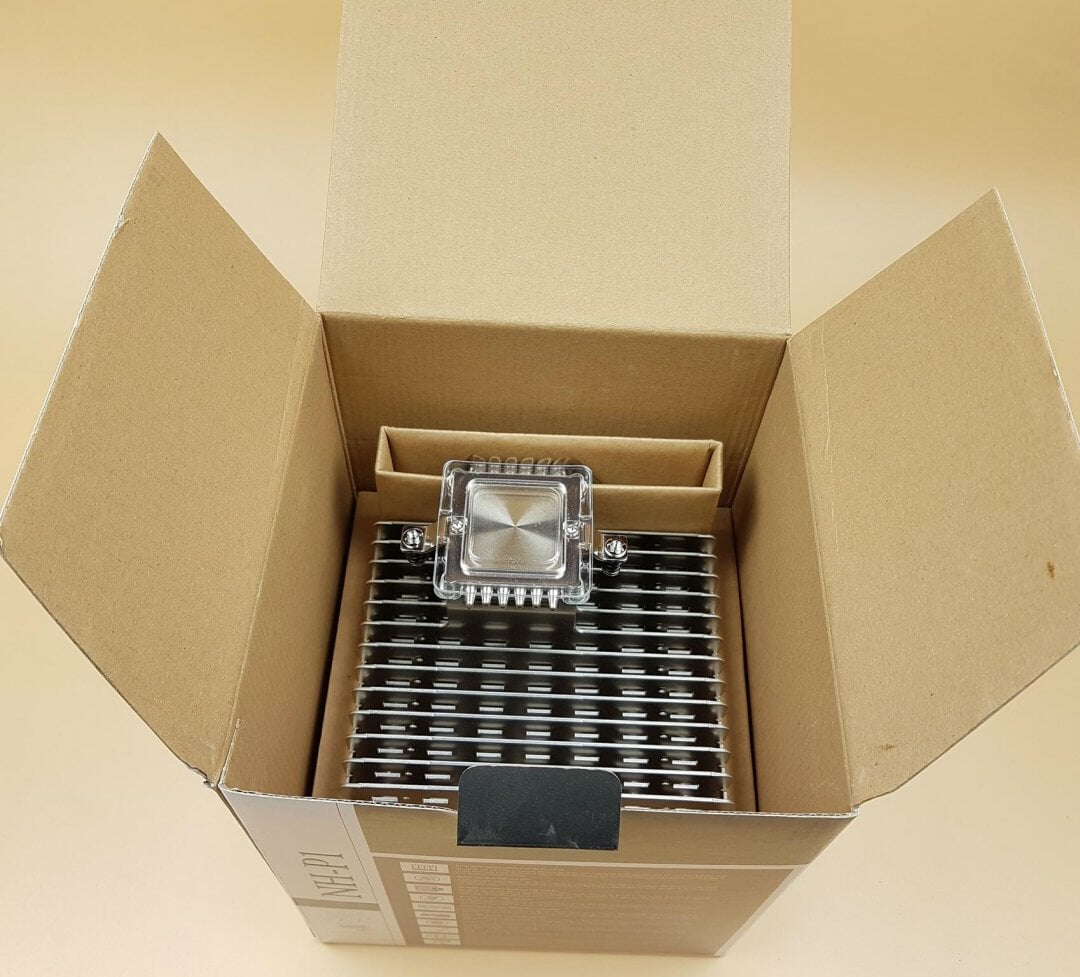 Removing the top cover will show the heatsink placed inside the cardboard tray. 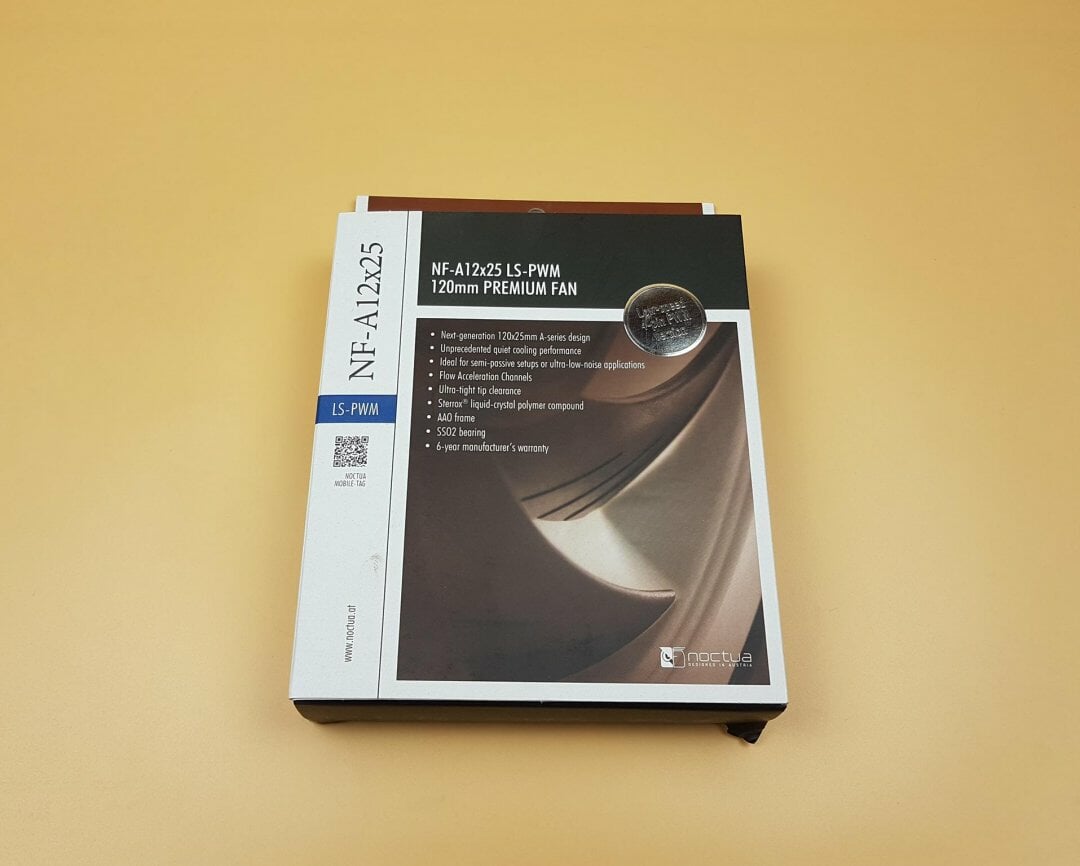 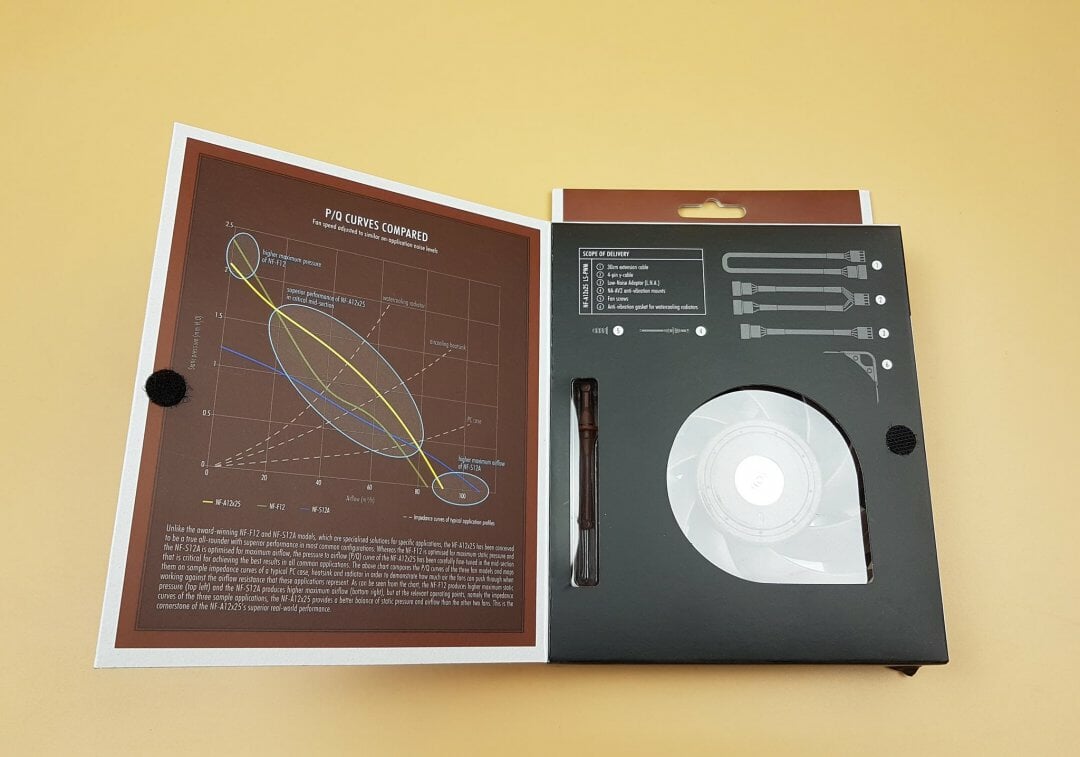 Let’s take a look at what is provided in the box. 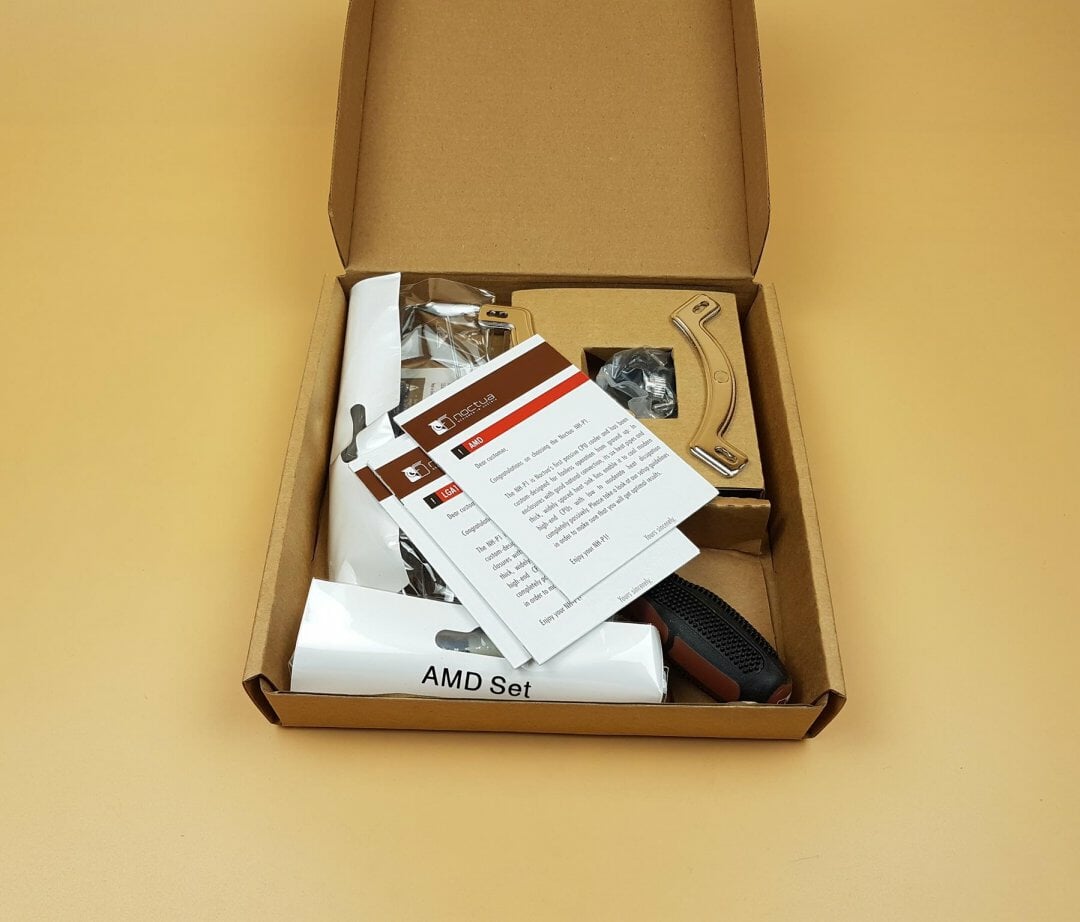 Here is a quick glimpse of what is provided inside the accessory box. 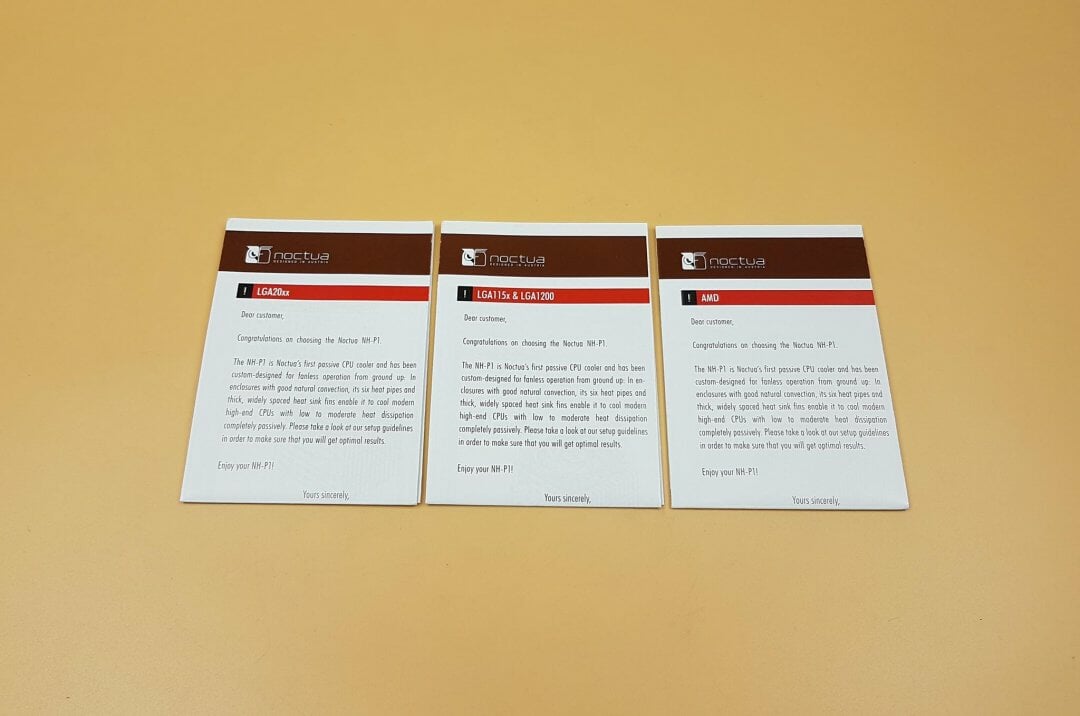 Noctua has provided well detailed installation manual for multiple sockets with clearly laid out illustrations. The attention to detail is typical as we have seen on their other coolers’ manuals. 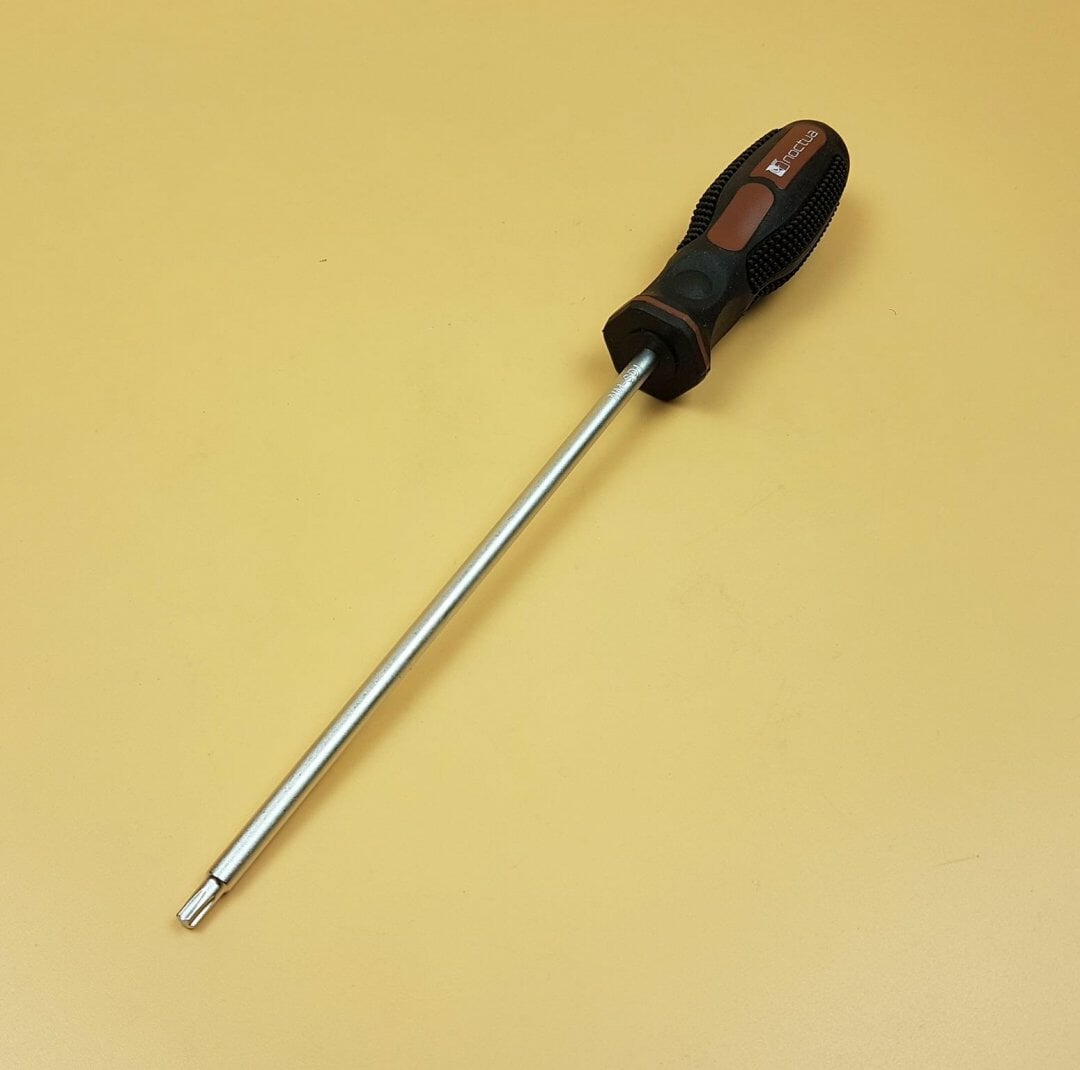 Noctua has provided a long tipped, gripped screw driver called NM-SD1. It has Noctua branding on the grip handle and the tip is in the Torx shape. I am not sure why Noctua opted for Torx instead of standard Philips screw driver and thumb nuts. 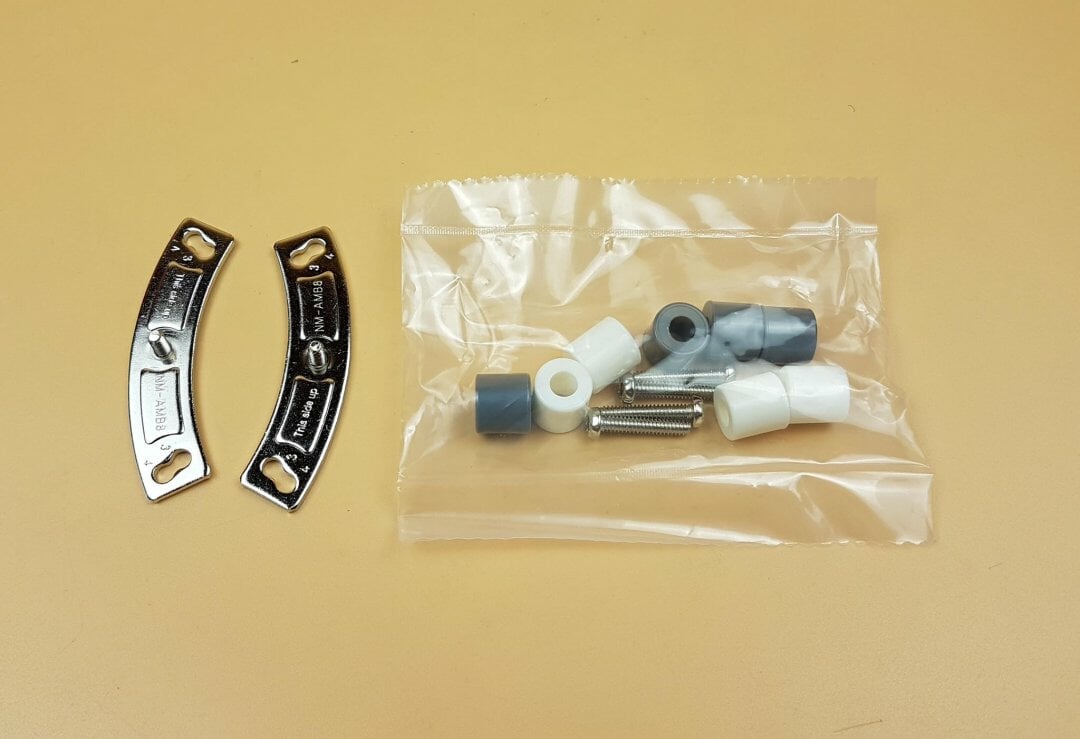 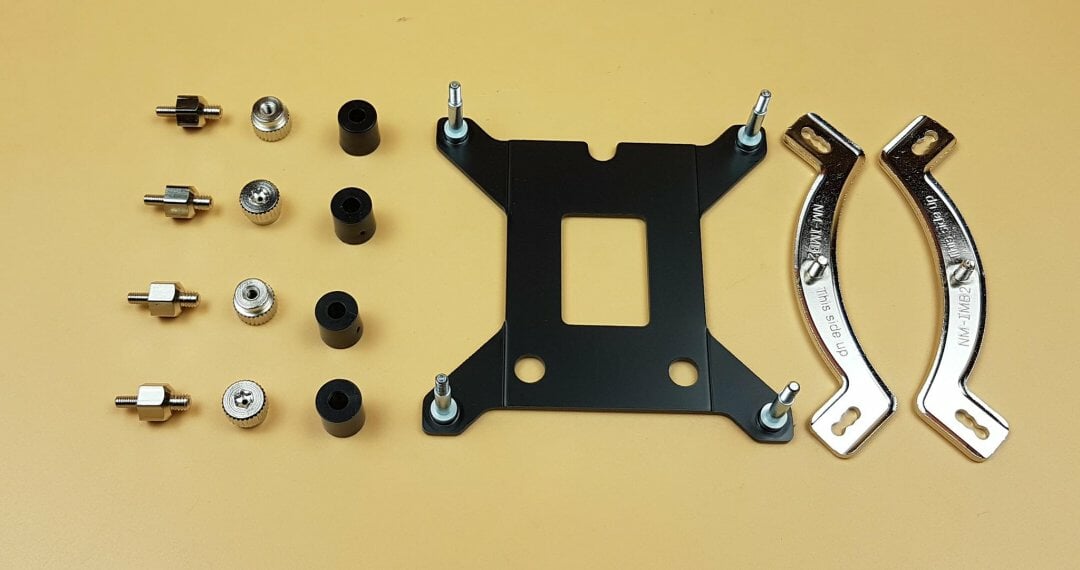 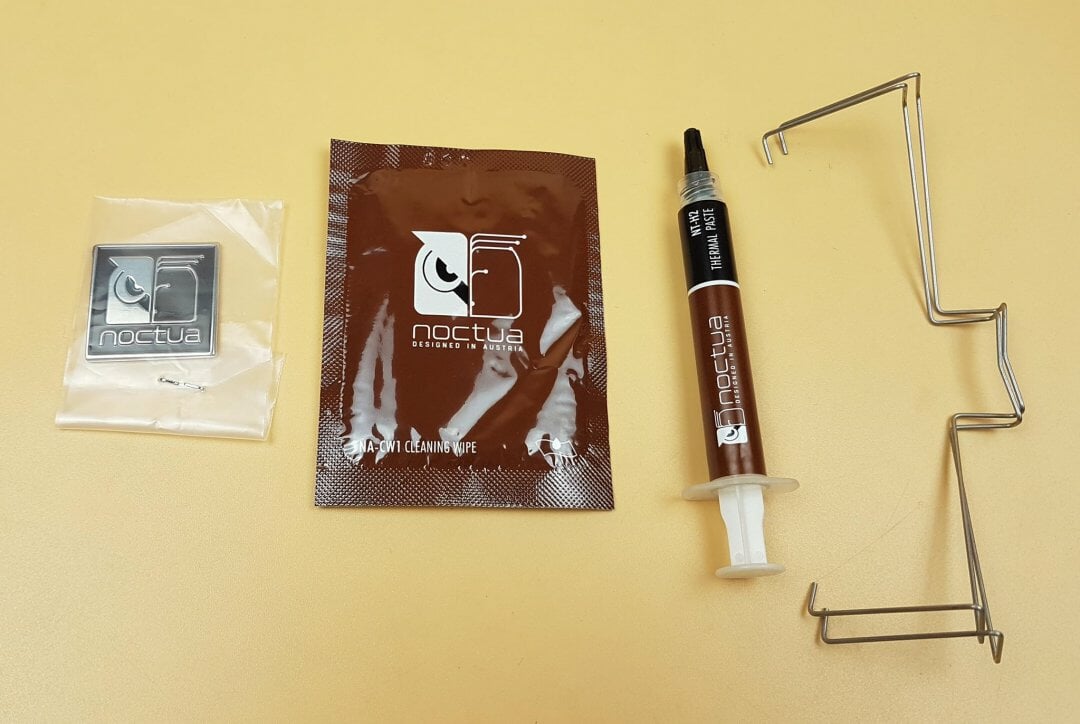 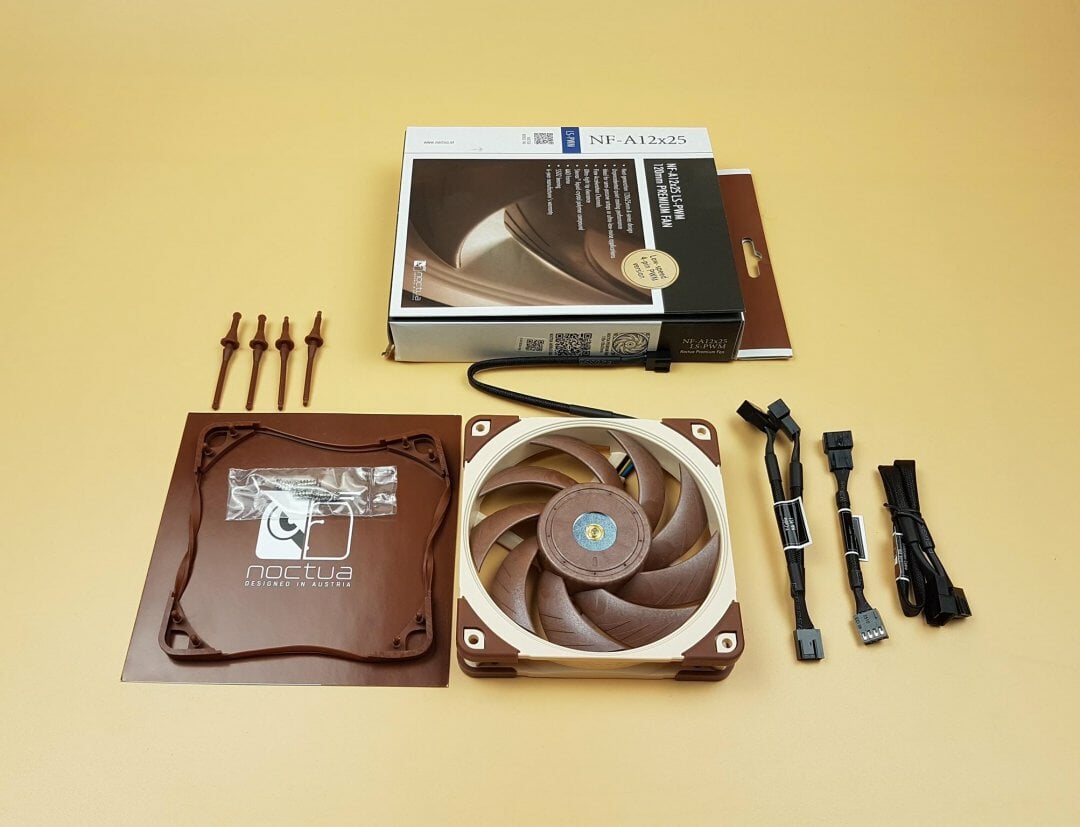 The above picture shows the contents of the Noctua NF-A12x25 LS PWM fan. 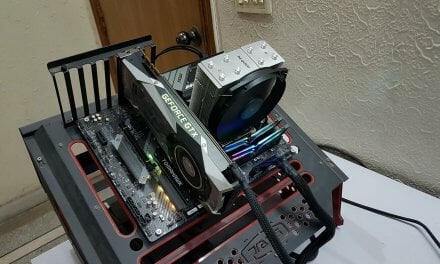 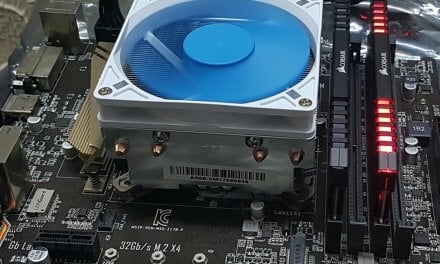 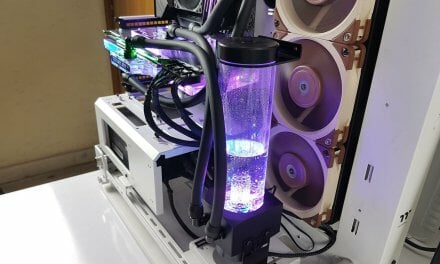 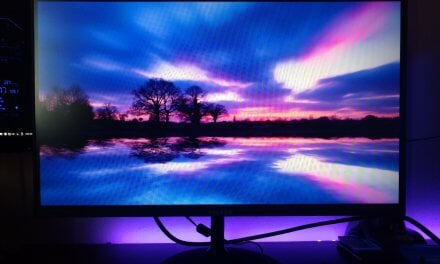