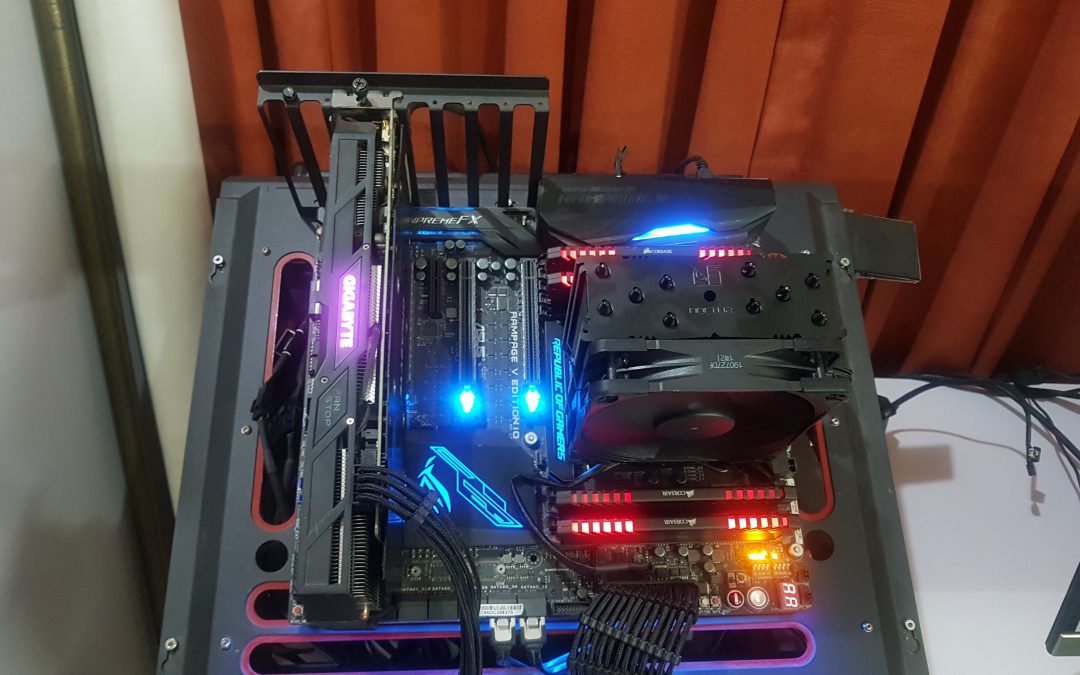 Noctua originates from a collaboration between the Austrian Rascom Computer distribution Ges.m.b.H. and the Taiwanese cooling specialist Kolink International Corporation, pooling more than thirty years of experience in the development, manufacturing, and marketing of high-end cooling components. Established in 2005, Noctua took international silent enthusiasts’ hearts by storm and quickly developed into one of the most acclaimed suppliers of premium quality quiet cooling products. Today, Noctua is present in more than 30 countries across the globe and working with several hundred sales partners. Chosen by noise-conscious PC users, system integrators and industry clients alike, Noctua has become synonymous with impeccable quality, excellent customer service, and class-leading quiet cooling performance.

About the time that Noctua has finally released their all-black color scheme versions of award-winning air coolers. They have released chromax.black edition of NH-L9i, NH-U12S, and NH-D15. The peculiar thing about these coolers is that everything from mounting hardware to fan clips to heatsinks to fans are black. Why it took them so long to finally produce something which has been requested over and over again? Let us answer this question. Noctua has been soldering the fins to the heat pipes for consistent performance over a longer period of time. This presented to them a challenge on finding the optimal material which can be coated on the soldered components that does not impede the performance yet provides the same consistency over a longer period of time as without coating. The production process was difficult to combine with the coating. It took a lot of time and engineering work to find an appropriate coating material and production process that gave Noctua satisfactory thermal performance and consistent visual appearance. Finally, it is done.

The new NH-U12S chromax.black is identical to the regular model except for the color: Featuring black coated heatsink, black fan with black anti-vibration-pads, black fan clips or fan screws and black mounting parts, they are literally black from head to toe. Coming from thoroughgoing optimizations of the coating material and process, the chromax.black models provide the same, renowned quiet cooling performance as their regular, non-coated counterparts. Noctua has sent us their all-black edition of the coolers for the review and today we will take a sping on their NH-U12S chromax.black edition cooler. This is their premium 120mm, single-tower heatsink design. The Series has the highest compatibility and the clearance from RAM with just 45mm depth to them. It is bundled with the NF-F12 PWM chromax.black Focused Flow fan to provide the utmost cooling performance at silent levels. 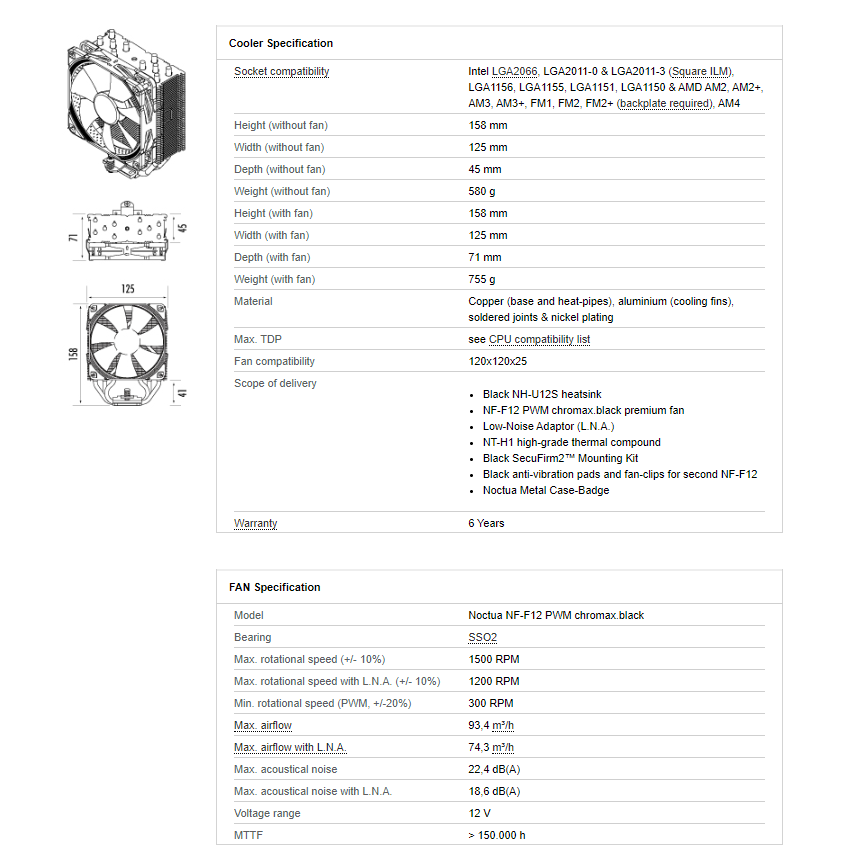 Noctua has changed the color scheme and design of their all-black coolers. This is as expected since they have been using a different color scheme for their chromax series of the products and accessories. The main packing box is made of a cardboard box and it is in black color background. 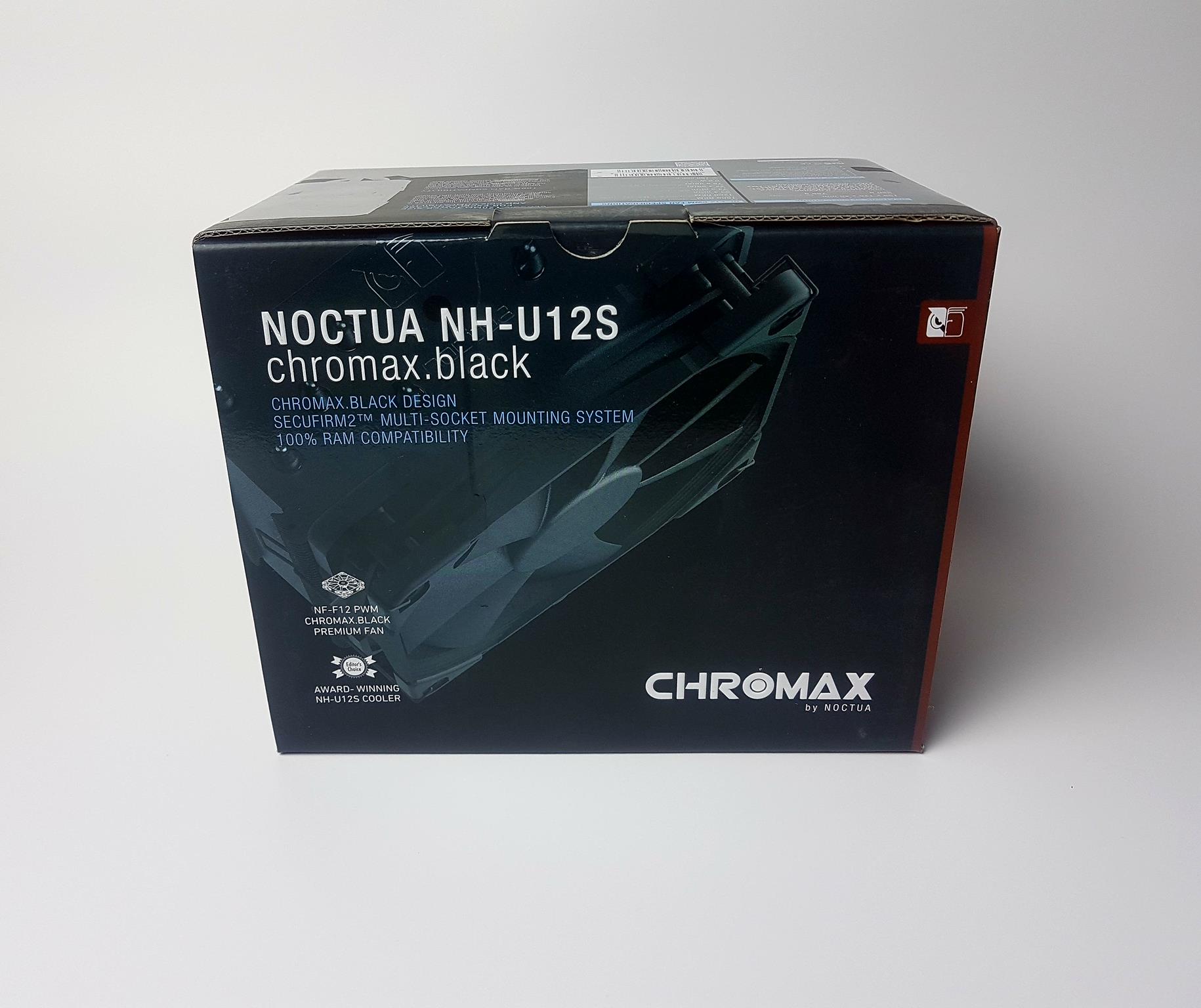 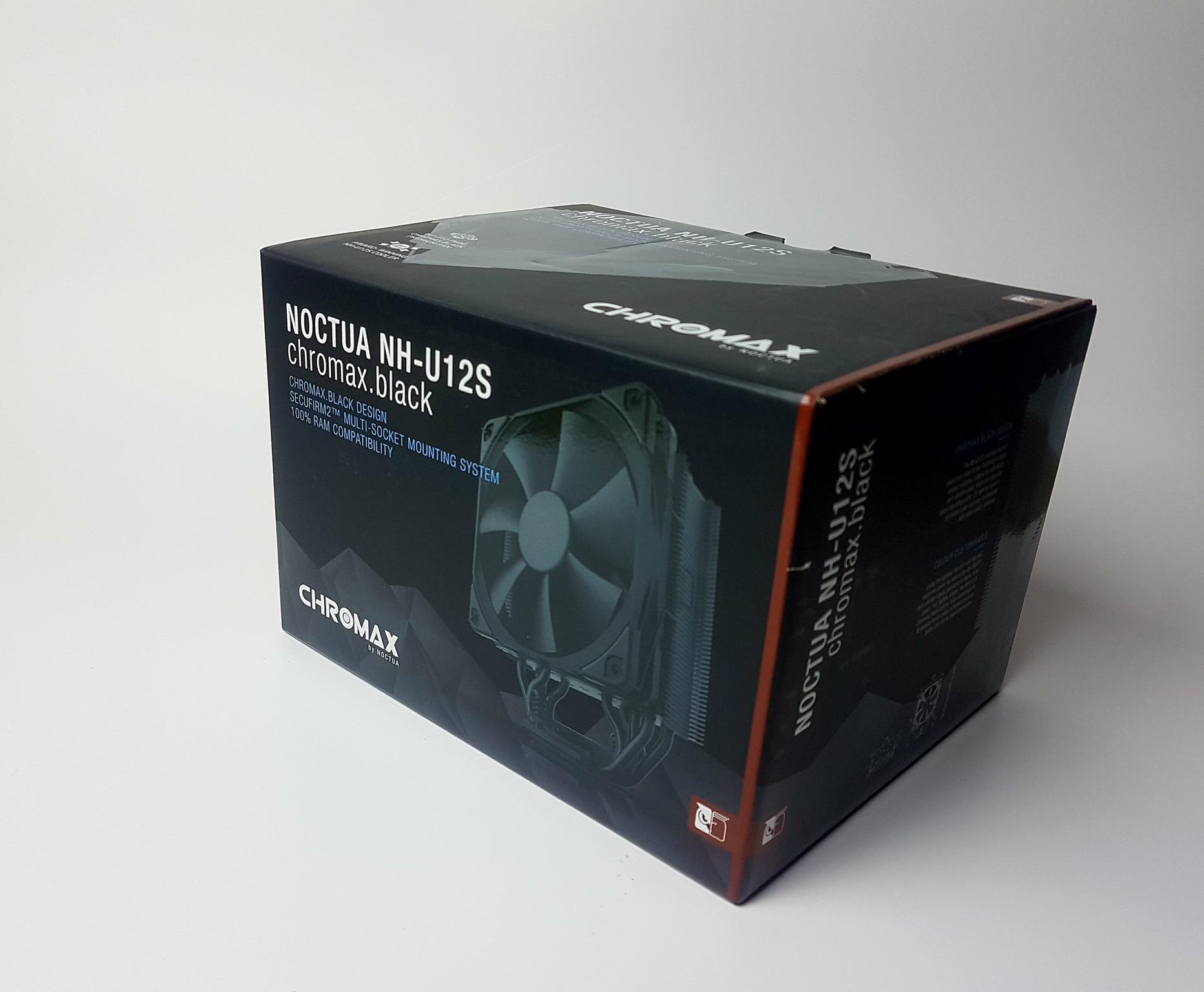 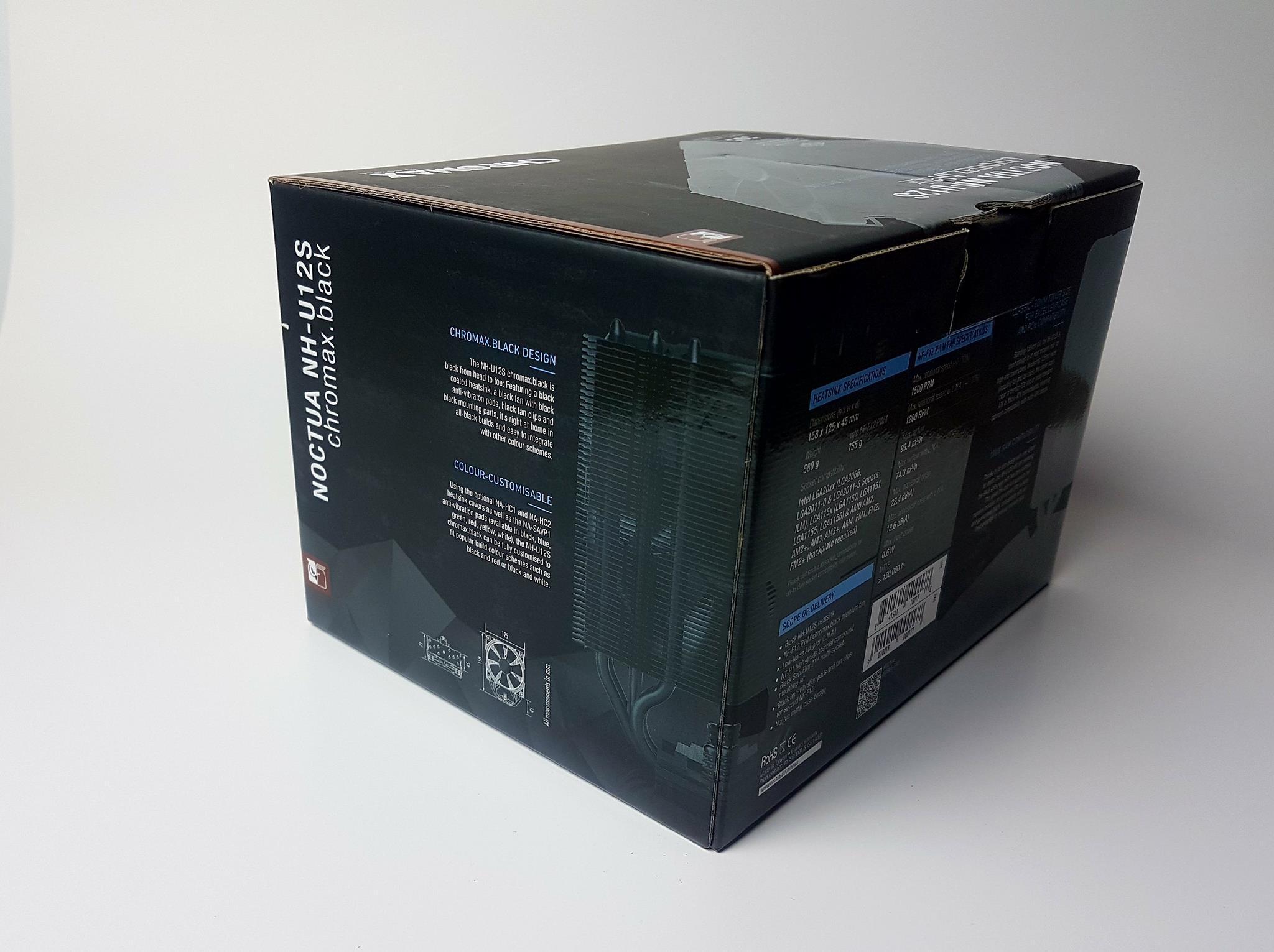 The model of the cooler is printed in a vertical layout on the left. Salient features are highlighted in the main section. There is a picture of the heatsink which overlaps to the other side of the packing box. The dimensions of the cooler are pictorially printed at the bottom. 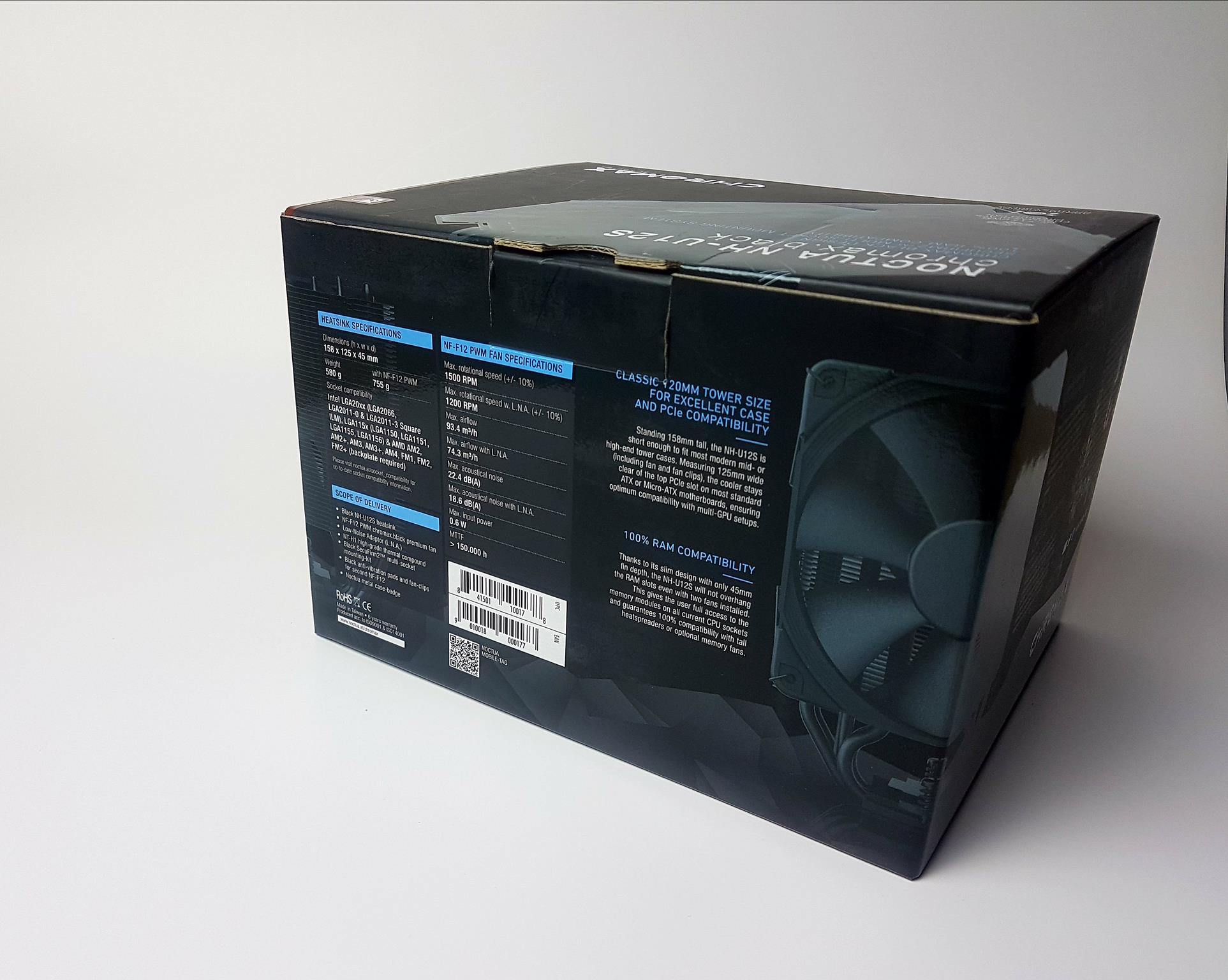 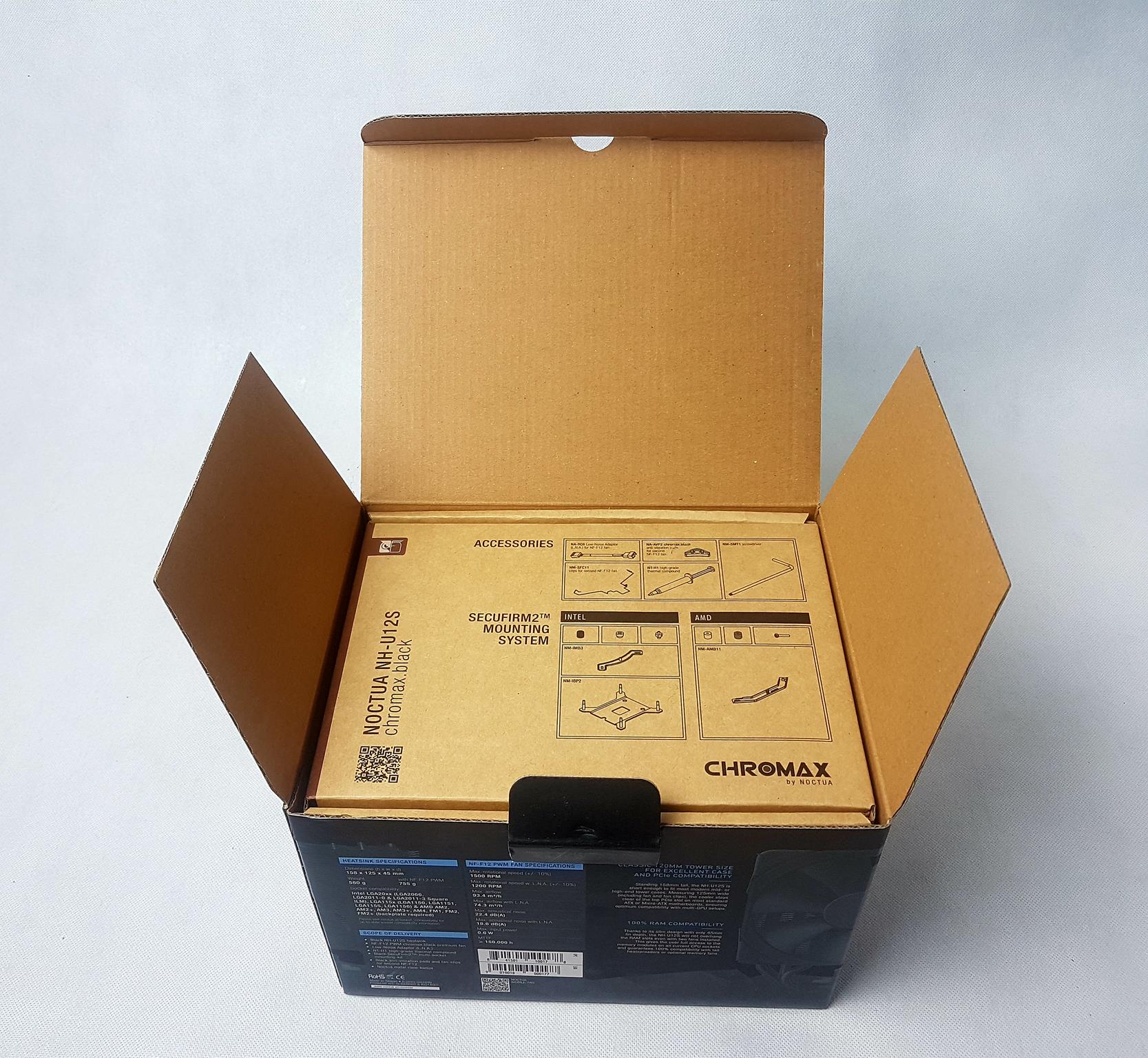 Opening the box will show the brown-colored accessory box placed on the top. 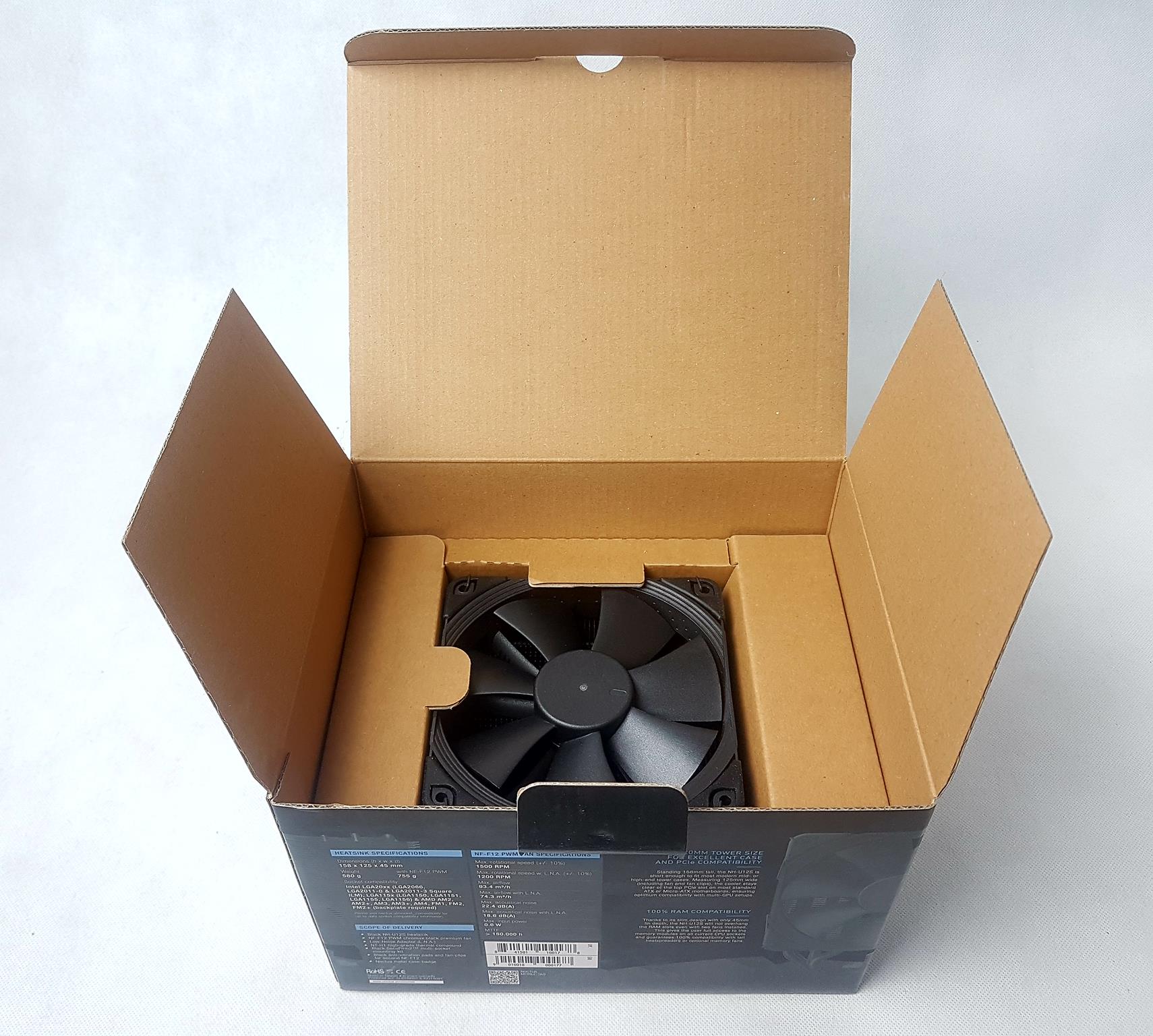 Removing the accessory box will show the cooler nicely tucked inside a cardboard box container.

Following is provided in the box: – 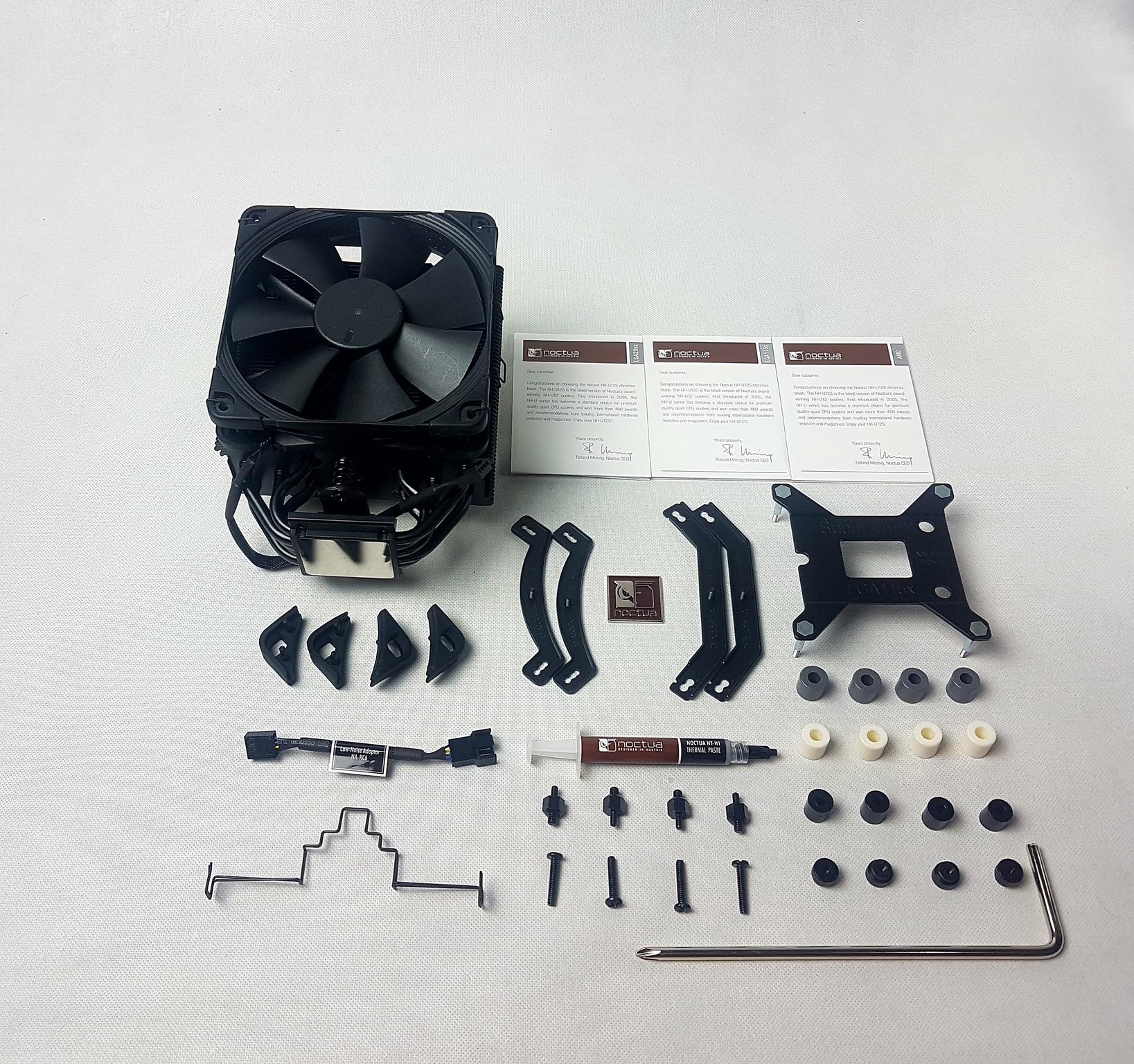 Let’s start with what Noctua has to say about their cooler. “The NH-U12S chromax.black is an all-black version of Noctua’s award-winning NH-U12S premium-quality quiet CPU cooler. Thanks to the same proven slim-tower heatsink design and NF-F12 PWM fan, it stays true to the NH-U12S’s successful formula of fusing excellent cooling performance with superb quietness of operation and outstanding RAM, case and PCIe compatibility. At the same time, the chromax.black version with its black fan and black coated heatsink combines these assets with a sleek stealth look. Topped off with the renowned SecuFirm2™ multi-socket mounting system, Noctua’s enthusiast-grade NT-H1 thermal compound and a full 6-year manufacturer’s warranty, the NH-U12S chromax.black is a premium choice for customers who seek a highly compatible 120mm heatsink that looks just as great as it cools.”

We have already reviewed the award-winning U-Type NH-U12 in detail. Click here to check it out. We will be giving a brief overview of the Noctua NH-U12S chromax.black since it is identical to the original cooler with the exception of the color. The NH-U12S chromax.black is a 120mm U-Type Tower cooler, based on the award-winning NH-U12 series. It features the copper 5 heat pipes with the copper base. NF-F12 chromax.black focused flow fan is provided with the heatsink for the optimal cooling performance. Let’s take a look. 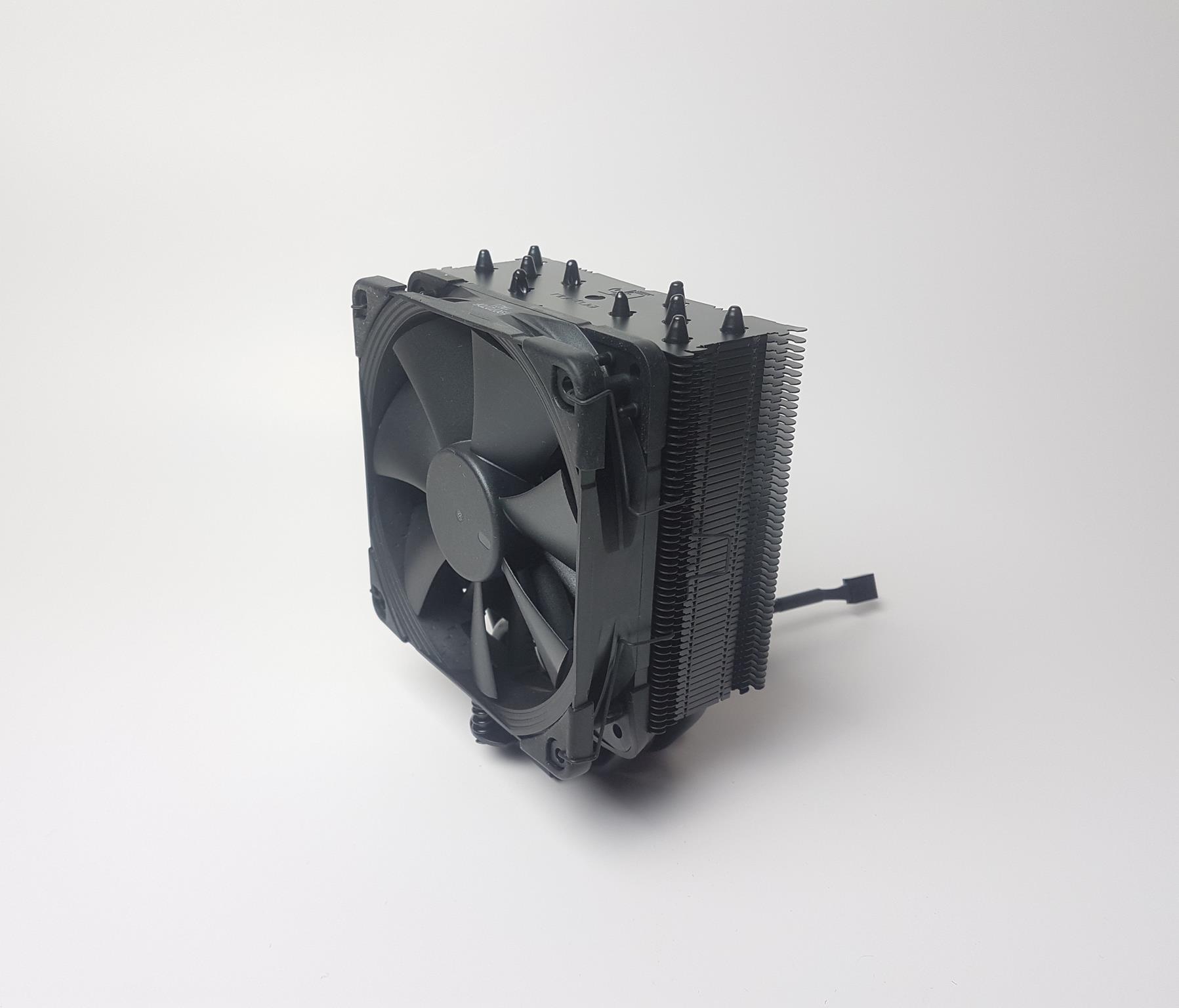 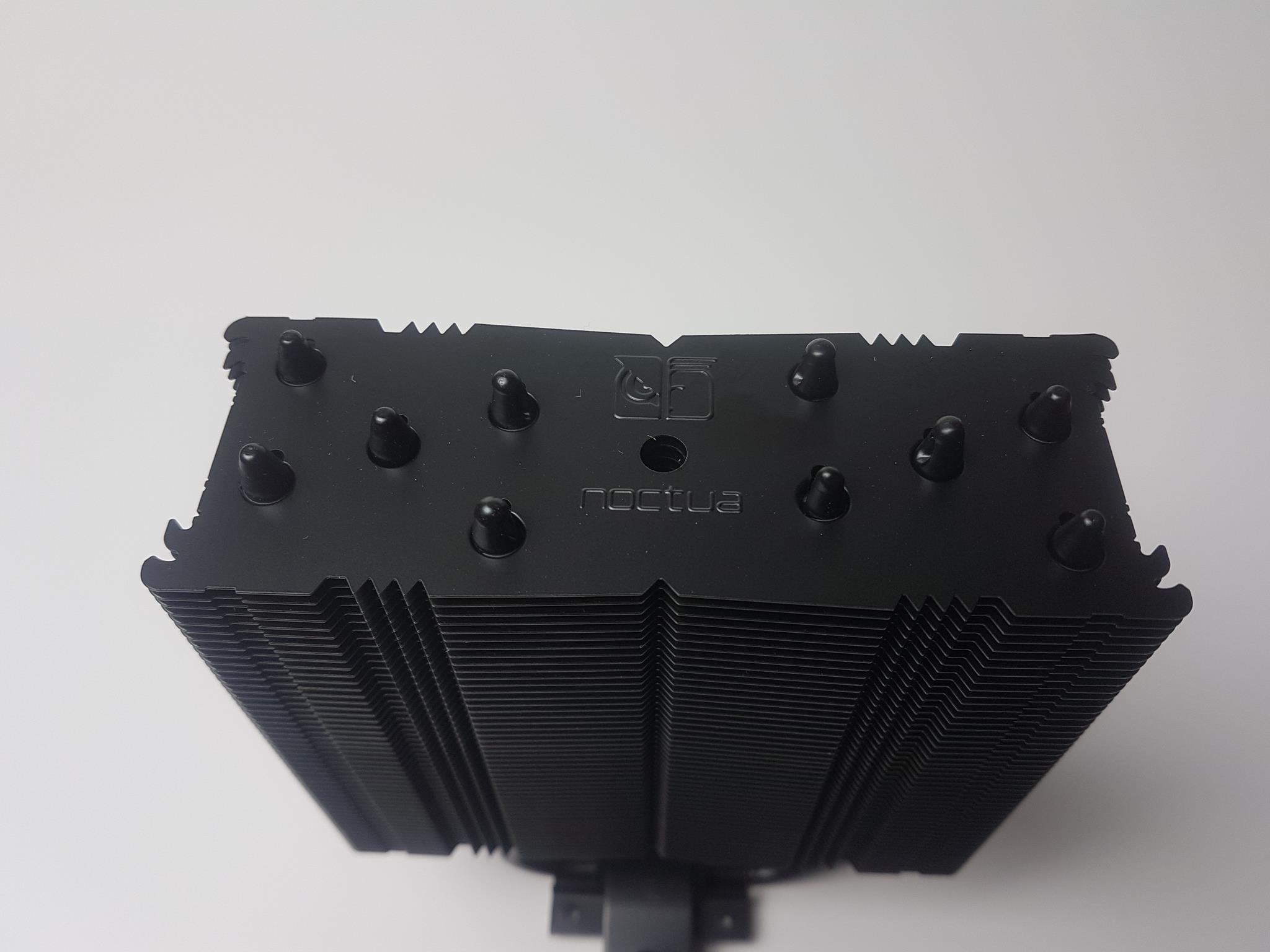 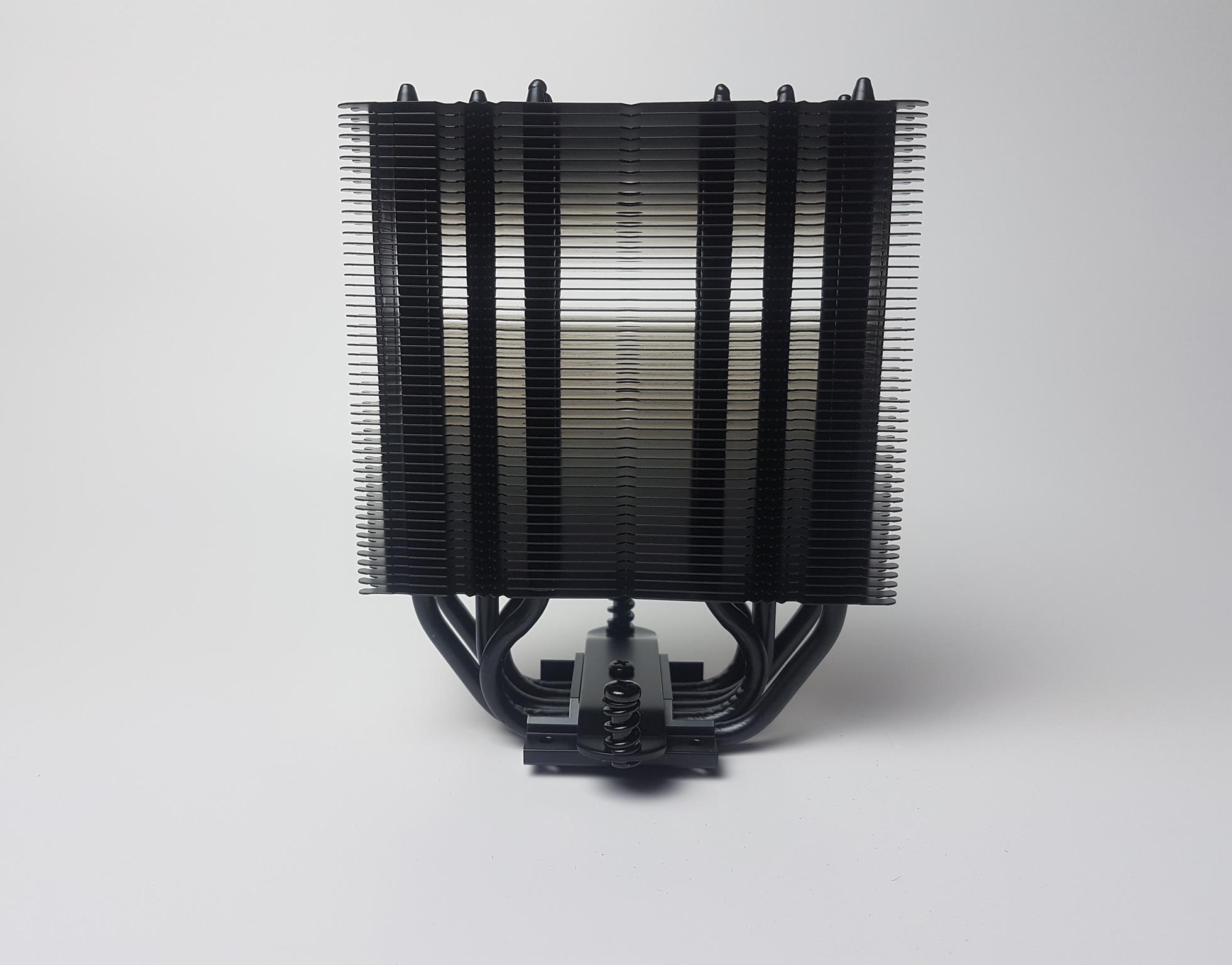 Taking a look at the front side of the heatsink, one thing is visible that is all-black color from top to the bottom. The heatsink comprises of 50 aluminum fins which are black coated and nickel-plated. The fin stack is less dense. The symmetry of the heat pipes inside the fin stack is identical to the original design. The heat pipes displacement inside the heatsink can be seen in the picture. 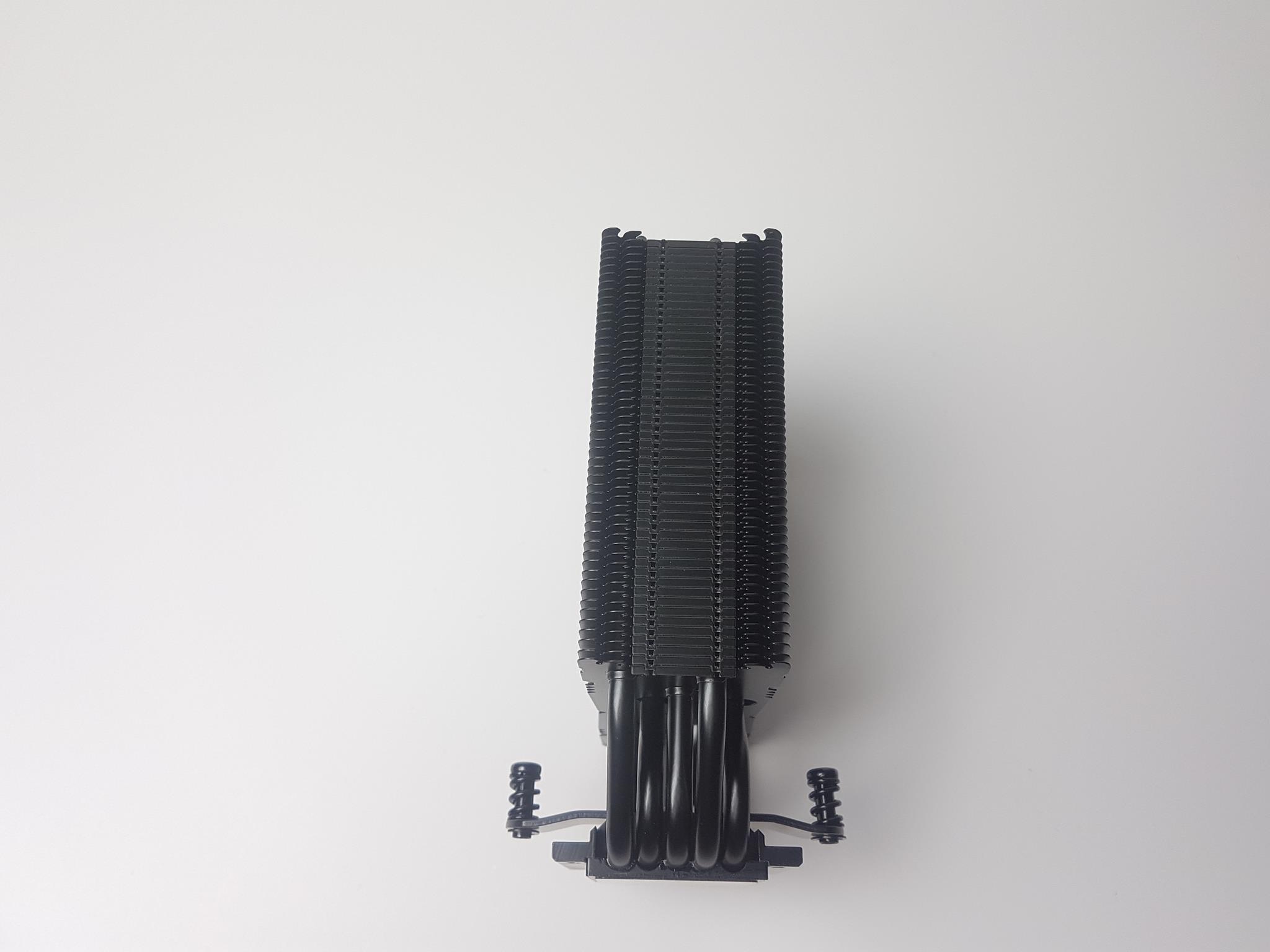 The left and right sides of the heatsink are identical. This side shows the slim design of the heatsink making it compatible with almost every socket area and it does not overhang the DIMM slots which adds to the universal compatibility with the RAMs in terms of their height. There are cut-outs on both sides running across the length. This is where the fan clips are inserted when installing the fans on the heatsink. 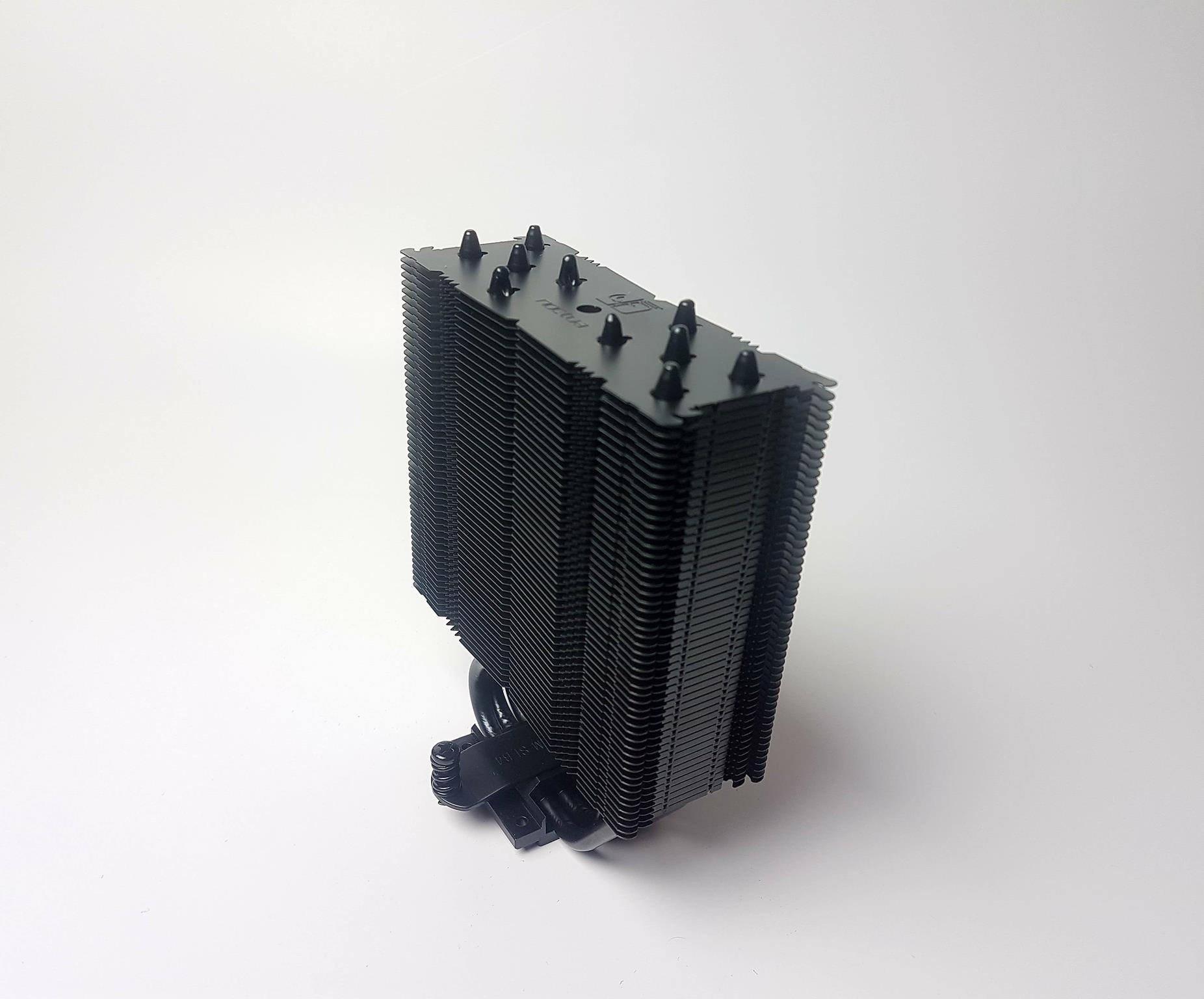 The above picture shows the front and right side of the heatsink at once. The overall design element is coherent and symmetrical like the original design. The edges are raised and fins are joined in the middle. There is nothing changed except the color. The overall geometry of the heatsink allows for better airflow and effective heat dissipation. 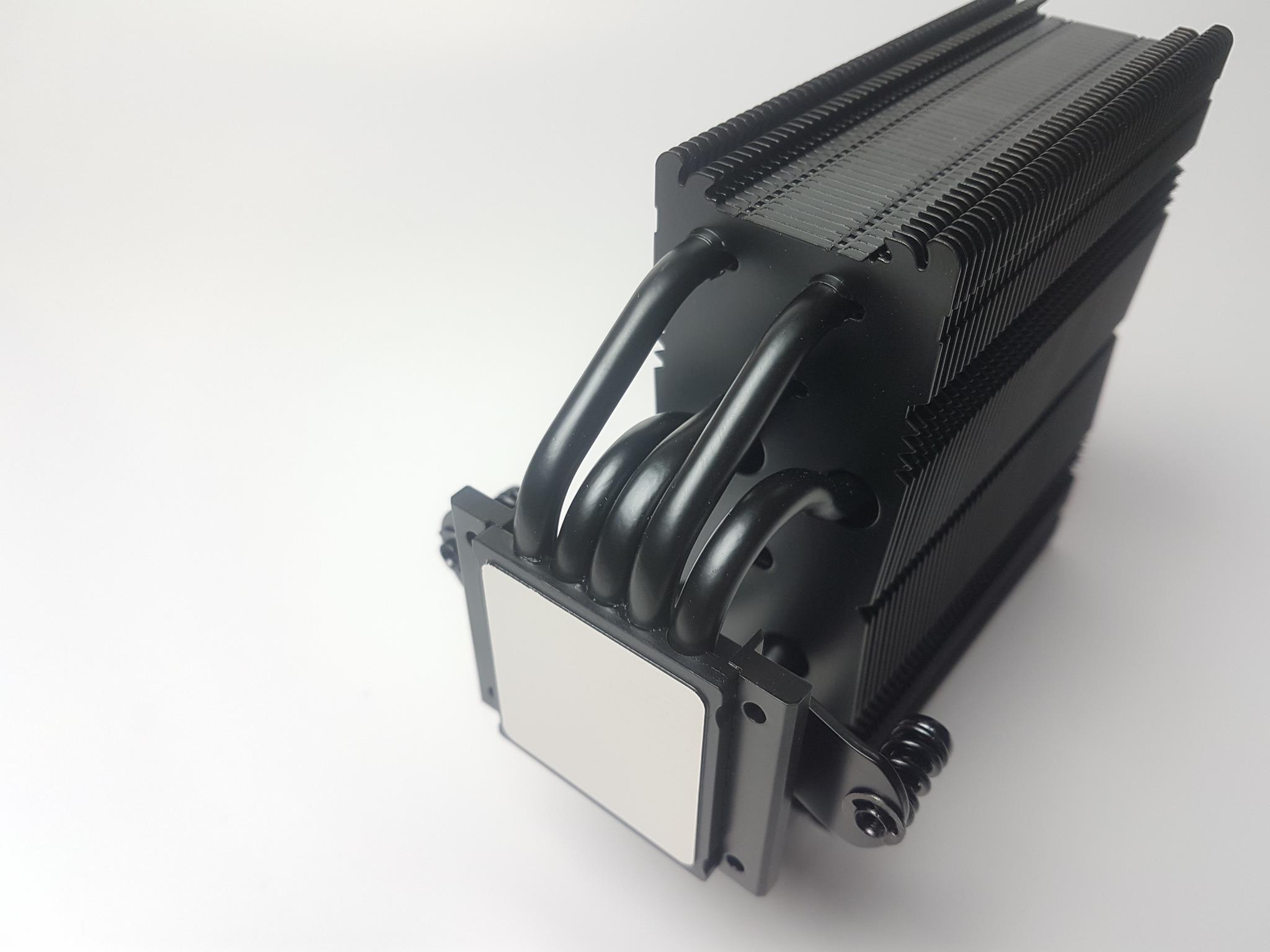 The Noctua NH-U12S chromax.black has 5x copper heat pipes which are also black color coated. The heat pipes are going inside the heatsink from different points to maximize the point of contact with the fin stack hence covering the large surface area for maximum heat dissipation. The heat pipes seem to be having 6mm thickness. 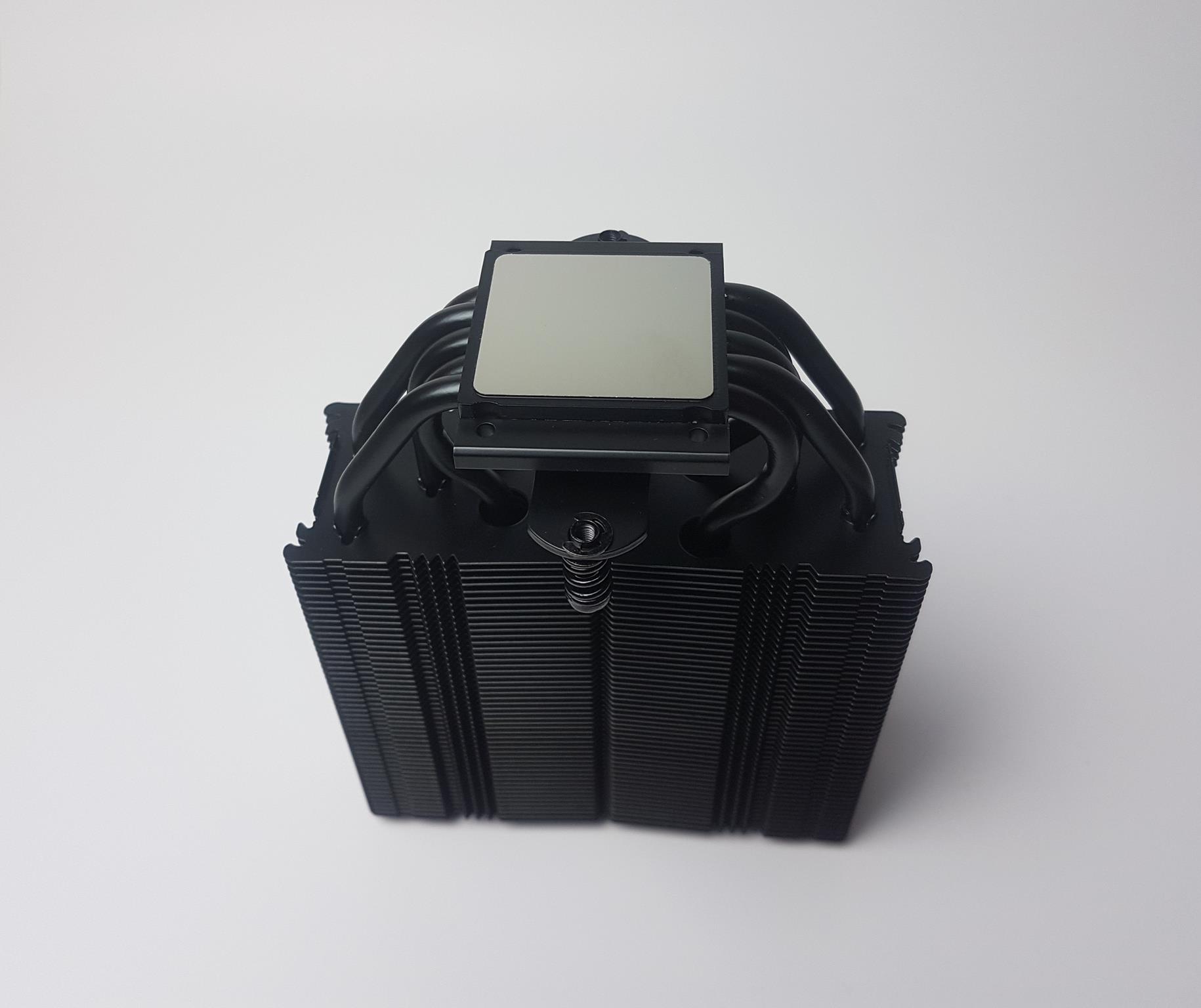 The copper base has 38mmX40mm size. It is nickel coated. There is no warning sticker pasted on the base out of the box. There is a transparent cover that is used to protect the base while shipping. 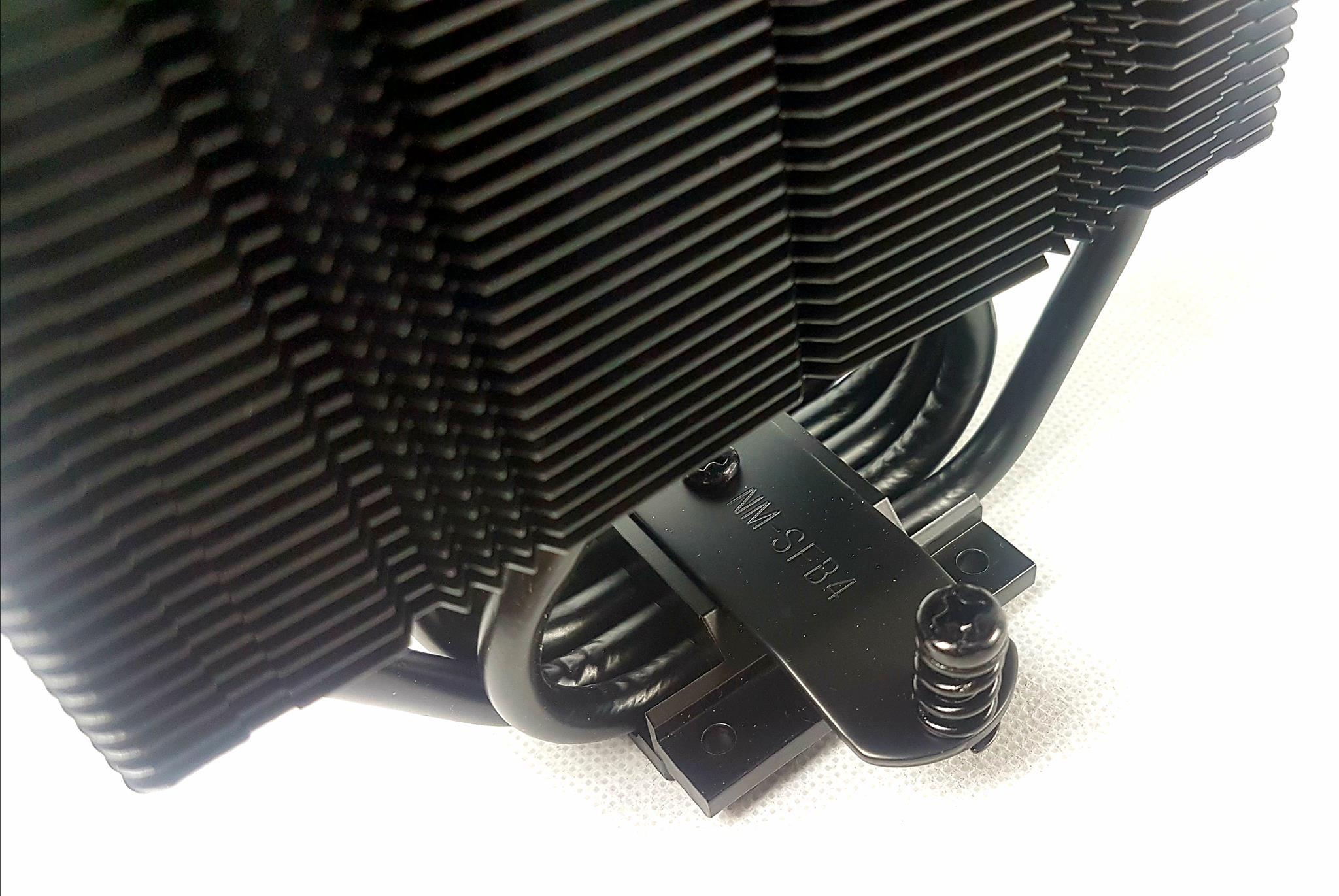 The mounting plate is already installed on the base of the cooler. Its code is NM-SFB4. It is secured using a screw in the middle. The plate can be removed by taking out the screw. The plate has two spring-loaded screws on both ends. 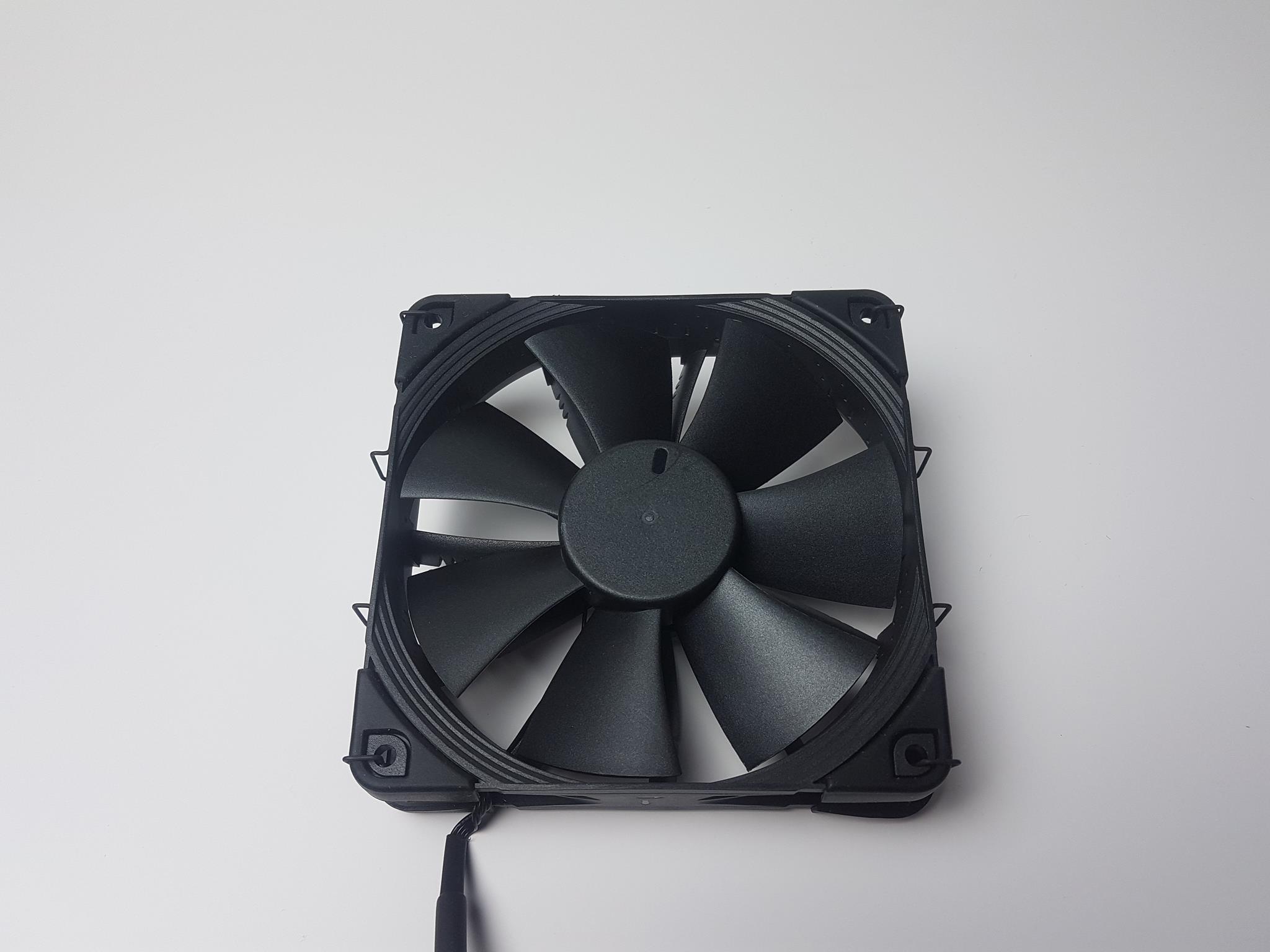 Noctua has supplied their premium NF-F12 PWM chromax.black Focused Flow fan with this cooler. This fan has the dimensions of the 120x120x25mm and it is using the Noctua’s legendary SSO2 bearing. The fan has 7 blades heptaperf impeller. The anti-vibration pads are in black color as well. The frame of the fan is in black color as well and is following the same stepped inlet design. 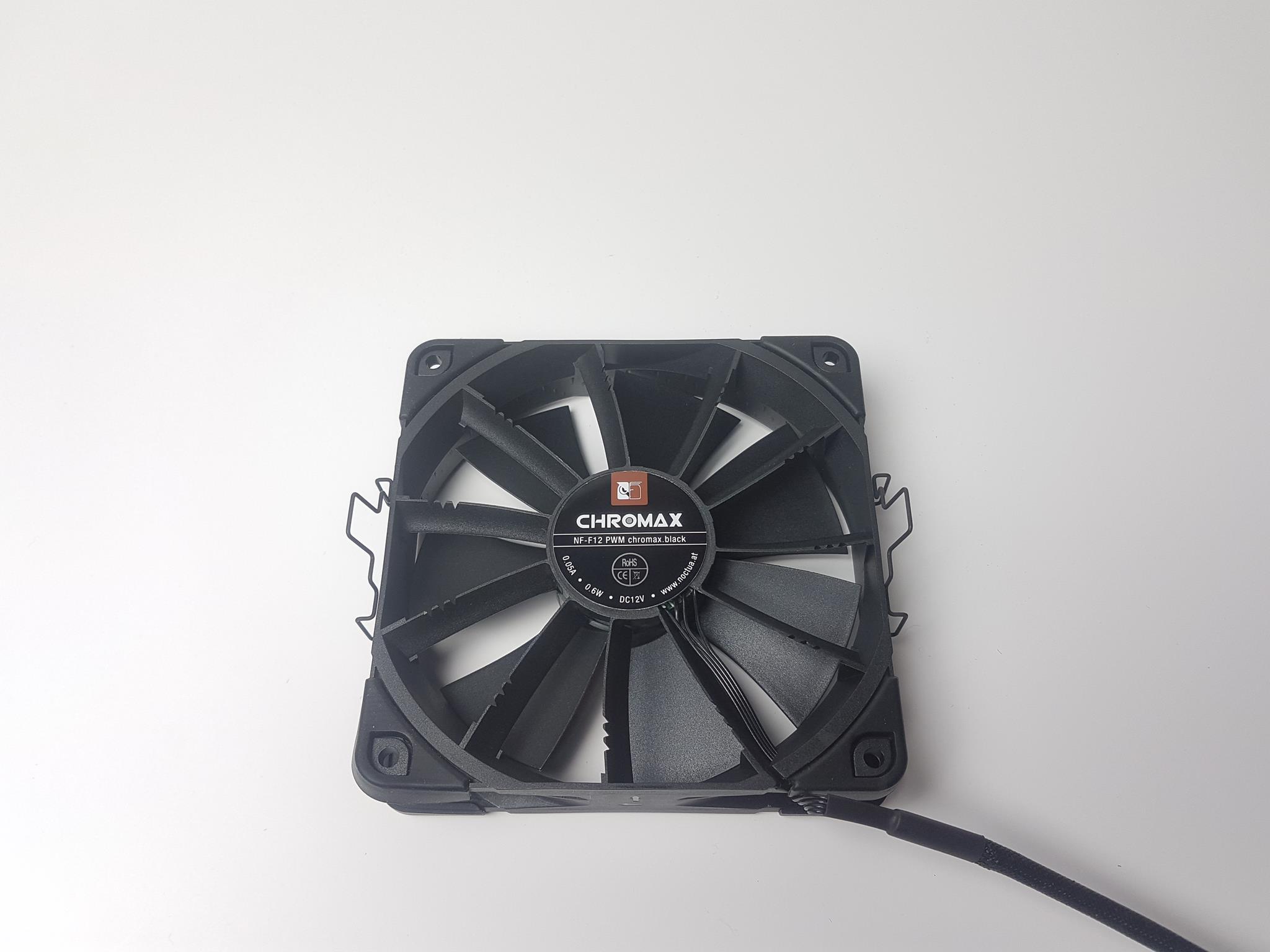 The stator guide vanes are set out in Varying Angular Distance and feature Vortex-Control Notches. Both measures help to spread the noise emission over a broader frequency spectrum and thus make the fan’s sound pattern more agreeable to the human ear. There is a sticker pasted in the center with Noctua brand logo printed up top followed by the CHROMAX branding. The power rating of the fan is printed at the bottom.

Here are the specifications of the fan:

Noctua has provided two clips in the accessory box which will allow the user to use two NF-F12 PWM chromax.black fans in push/pull. Only one fan is included. There is a low noise adapter cable labeled NA-RC6 included as well that will lower the rotational speed hence reducing the sound level. 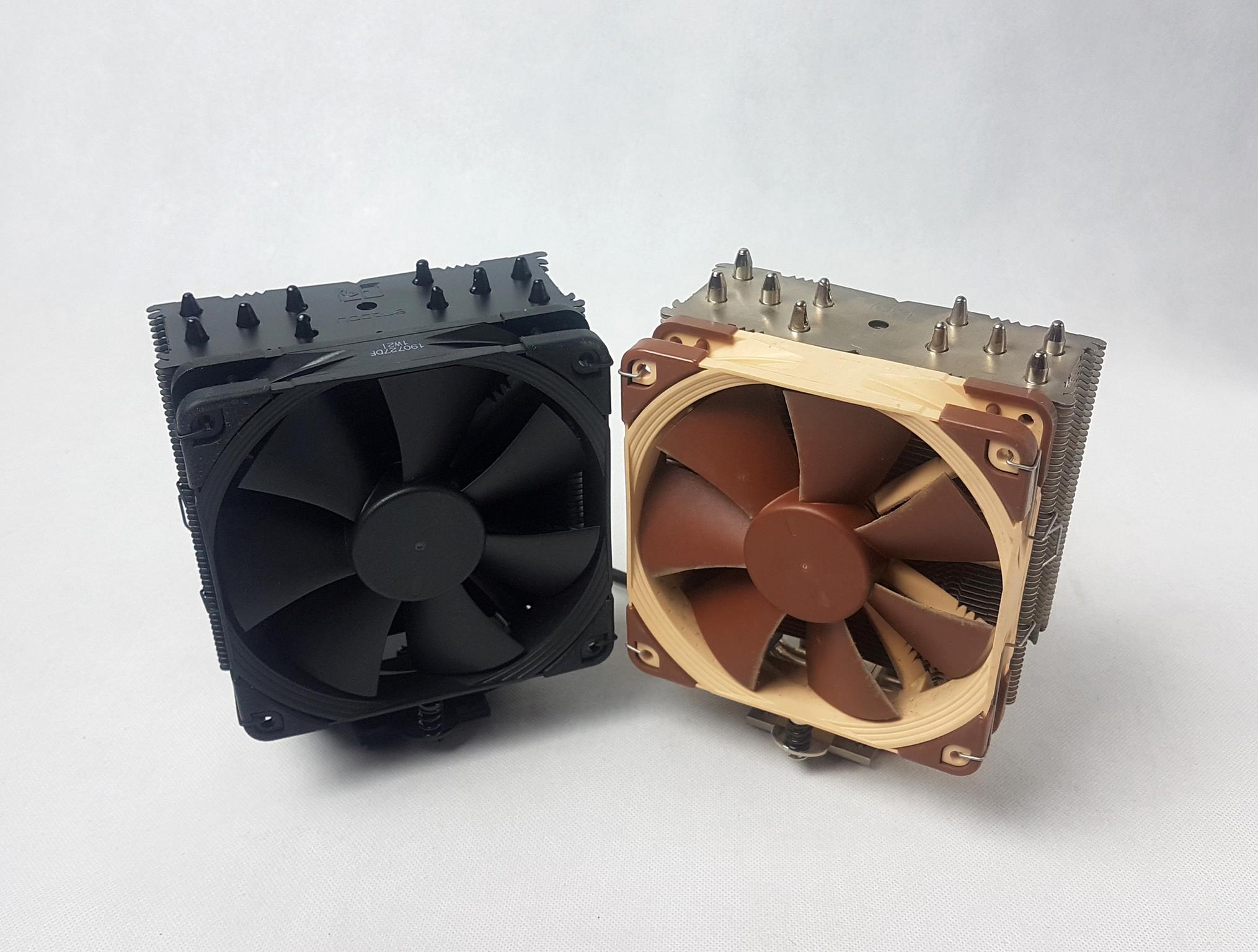 The above picture shows both coolers. This is for visual comparison clearly showing that except the colors, they are identical.

The cooler was tested on the LGA-2011-v3 using Intel i7 6850k and Asus Rampage V Edition 10. The installation mechanism is quite simple on this socket.

One would need to check for the compatibility and the clearance with respect to the DIMMs, first PCIe slot and chassis. The height of the cooler is 158mm. Any chassis with a CPU height clearance of 158mm will support this cooler. There is enough clearance from the first PCIe slot with this cooler. This cooler does not overhang the DIMM slots which makes it almost universally compatible with any height RAMs. This is mentioned on Noctua’s website. “Some AMD mainboards violate the 96x114mm keep-out zone specified by AMD, so the NH-U12S can only be used with RAM modules of up to 40mm height on these boards. Please consult our compatibility list for details.”

The following software were used for testing and monitoring.

We are using Noctua NT-H1 on our test benches for all the coolers testing. This will ensure the standardization and mitigate any performance benefit that may come using the supplied thermal paste. Delta temperatures are reported on the graphs (Delta Temp = Average of all cores’ max temps – ambient temp). The testing is done on an open-air bench system. Once inside the chassis, the temperatures are expected to rise and would largely depend upon the optimal airflow inside the chassis.

For this particular review, we have retested the Noctua NH-U12S using the same methodology. Let’s take a look at the results. 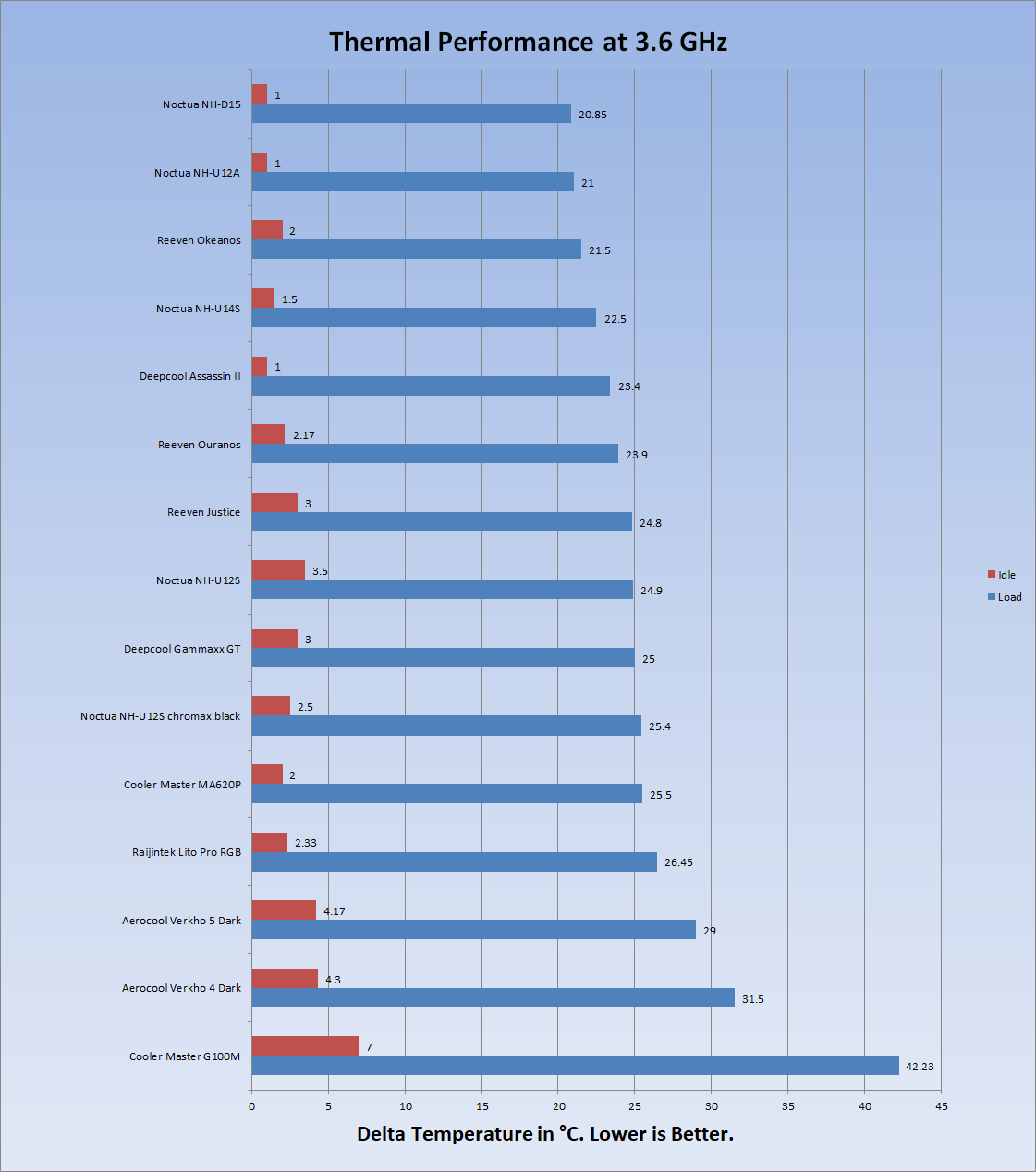 There is a difference of 0.5°C between the Noctua NH-U12S and NH-U12S chromax.black which is marginal. 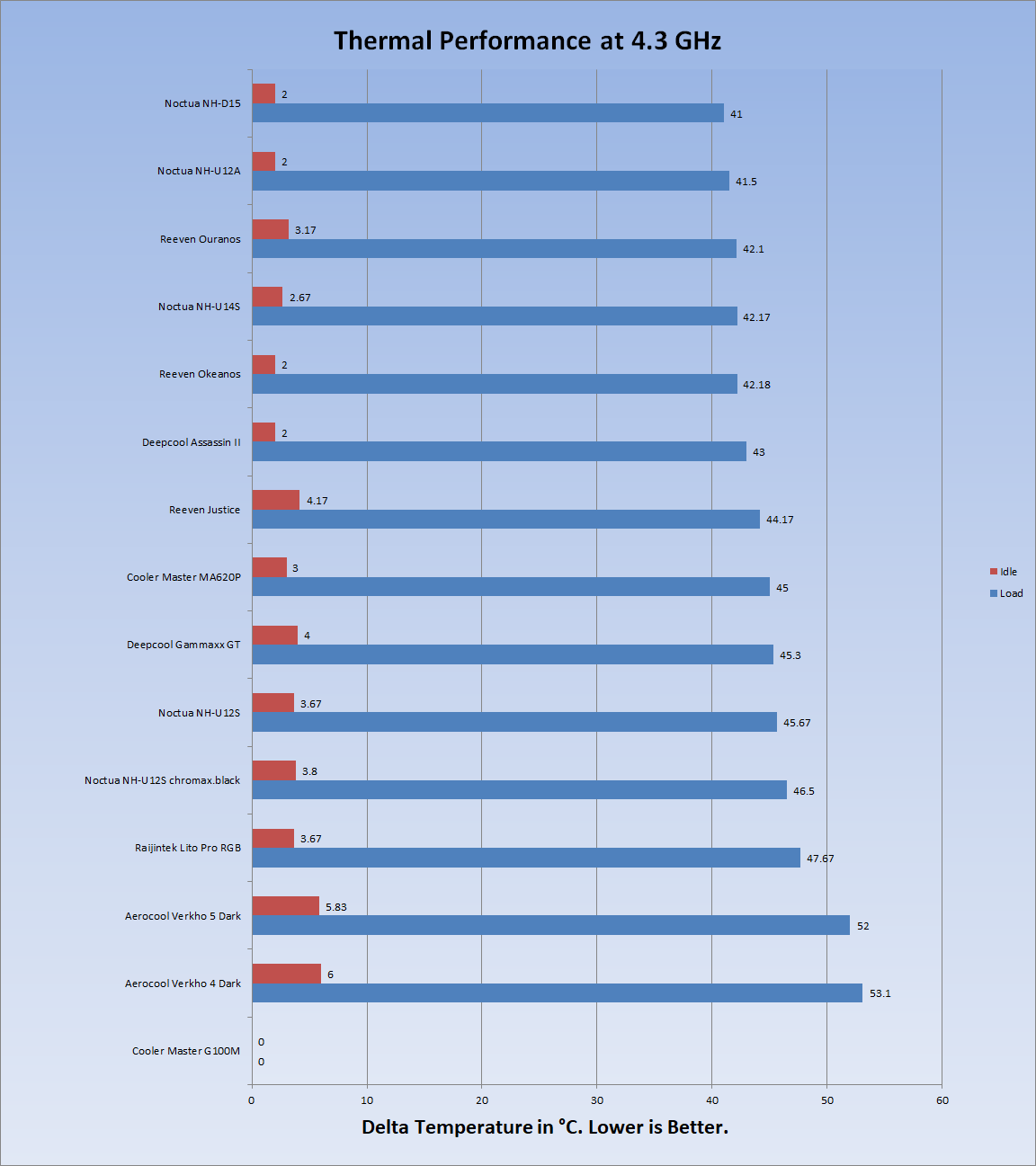 There is a difference of 0.83°C between the Noctua NH-U12S and NH-U12S chromax.black which is again marginal.

The sound meter was showing the noise level of the Noctua NF-F12 PWM chromax.black to be 39 dB(A) with an ambient sound level of 36 dB(A).

Noctua has released the all-black chromax edition of their award-winning CPU coolers i.e NH-L9i, NH-U12S, and NH-D15. Since Noctua is soldering the copper heat pipes with the fins, they were on the lookout for the coating material that will not impede the thermal performance over the longer period of time as well as the new production process for this coating. The chromax edition of these coolers is identical to the original coolers with one exception which is the all-black color. All-Black here refers to literally every component/accessory being in the black color be it the heatsink or the fans or the mounting hardware. These coolers from head-to-toe are black.

There are 50 aluminum fins which are black coated and nickel-plated. They form a less dense stack and are soldered to 5x copper heat pipes which are also black coated to form a heatsink. The heat pipes are terminating at the top where their pointy heads are coming out of the top fin plate. The top plate has a Noctua brand logo and name. The copper base is mirror finished and has a dimension of 38x40mm. The mounting plate NM-SFB4 is already installed on the base module of the cooler. It has two spring-loaded screws that are used to secure the heatsink to the mounting hardware.

The price of the Noctua NH-U12S chromax.black at the time of this review is $69.95/£67.99. The Noctua NH-U12S is listed on Amazon at $59.95. With just $10 above the user can get a cooler with the same footprint and thermal performance but with better aesthetics and neutral color that can be used in any themed build. In our testing, the cooler has performed almost similar to the NH-U12S though this matte black color is a fingerprint magnet.

We are thankful to the Noctua for giving us the opportunity to review their NH-U12S chromax.black CPU air cooler.