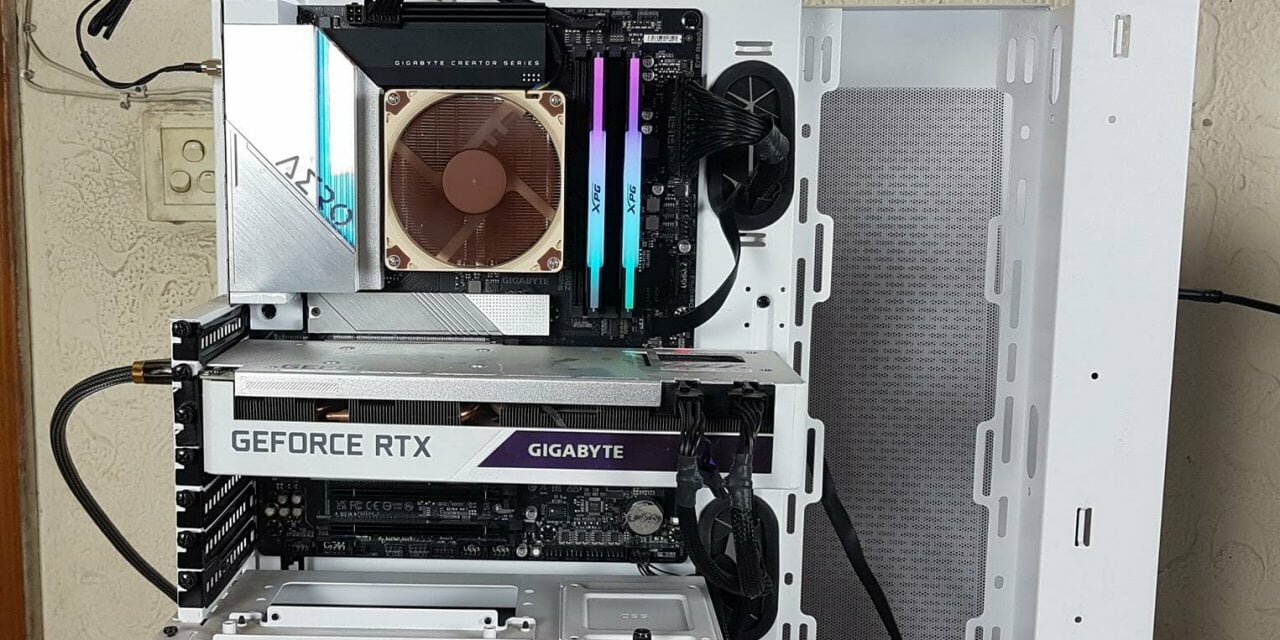 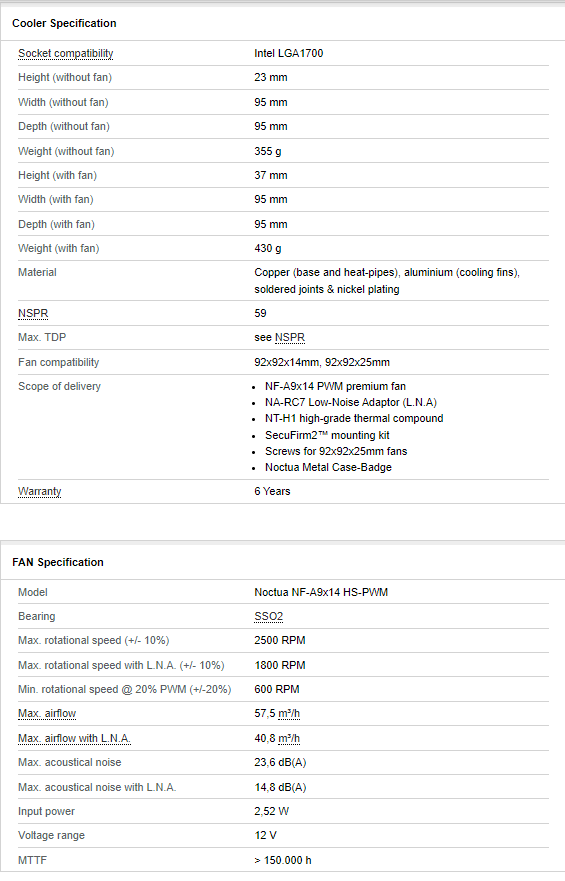 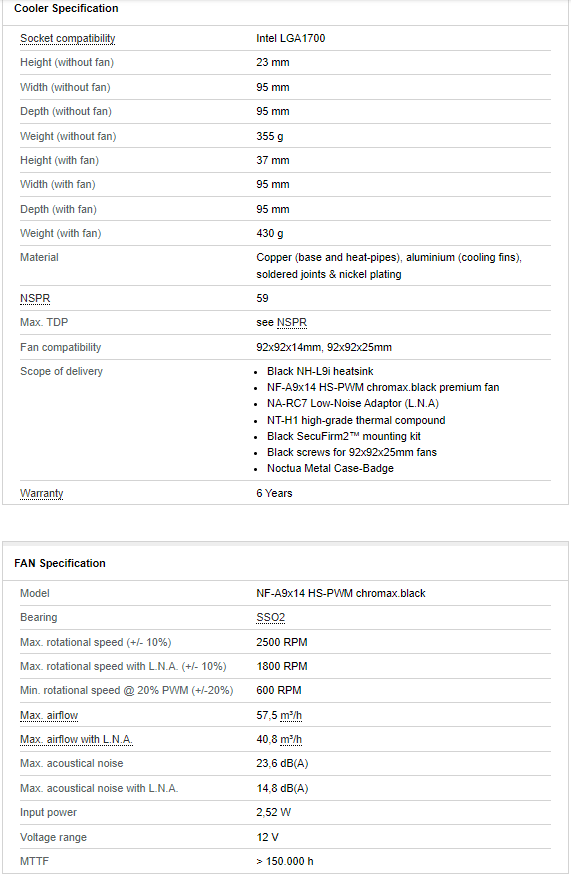 Both coolers are shipped inside a cardboard packing box. The chromax.black edition cooler has a black color theme on the packing box. 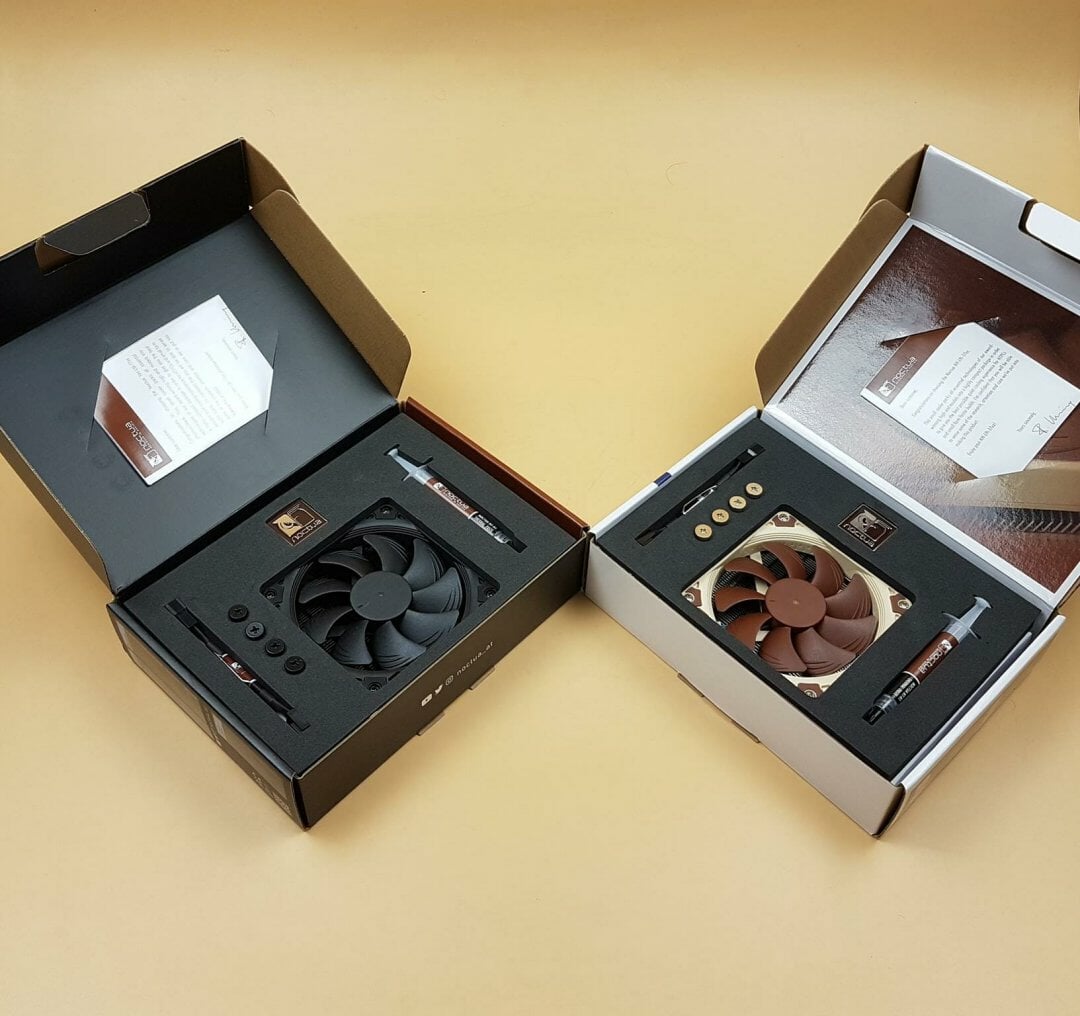 The main presentation of the cooler and contents are the same as we have seen on the previous NH-L9 series coolers. Following is provided in the box: – 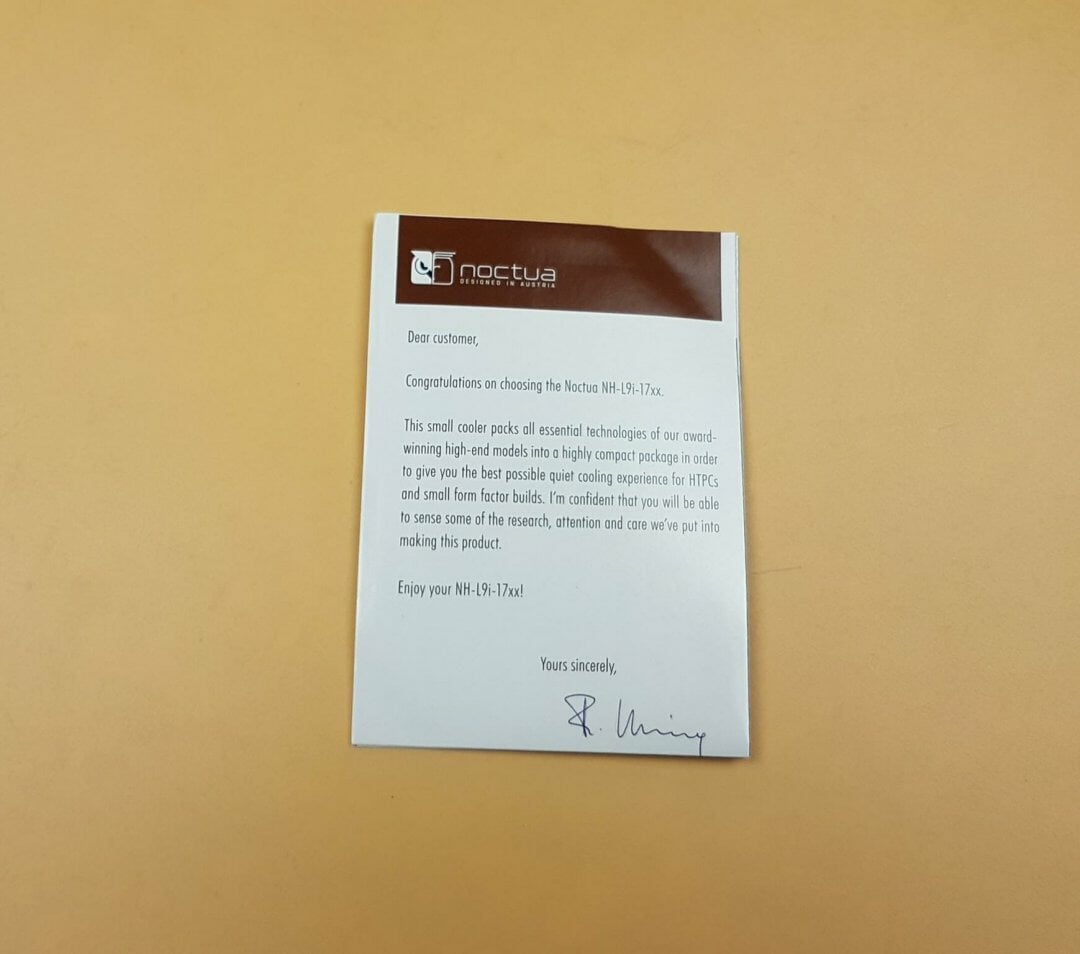 Noctua has provided a detailed user guide for the installation of the cooler. 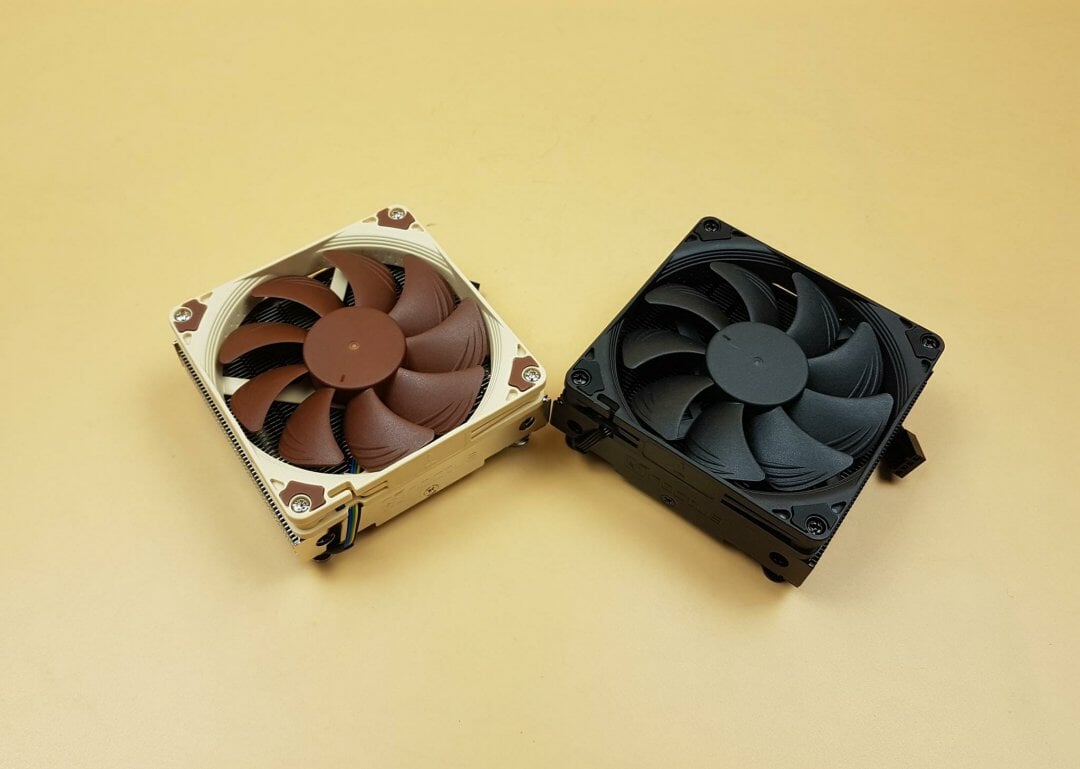 Let’s start with what Noctua has to say about their cooler. “The NH-L9i-17xx is the latest, LGA1700-specific revision of Noctua’s award-winning NH-L9i low-profile CPU cooler for Intel-LGA17xx based HTPCs and Small Form Factor (SFF) systems. At a height of only 37mm, the NH-L9i is ideal for extremely slim cases and, due to its small footprint, it provides 100% RAM and PCIe compatibility as well as easy access to near-socket connectors even on tightly packed mini-ITX motherboards. The custom-designed SecuFirm2™ mounting system for the LGA1700 (LGA17xx family) socket makes installation a breeze and, thanks to the highly optimized NF-A9x14 92mm fan that supports fully automatic speed control via PWM, the NH-L9i-17xx runs remarkably quietly. Topped off with Noctua’s renowned NT-H1 thermal compound, the NH-L9i-17xx combines everything users have come to expect from Noctua’s larger coolers into a super-compact, a premium-quality package for ITX and HTPC builds with Intel LGA17xx family CPUs.” 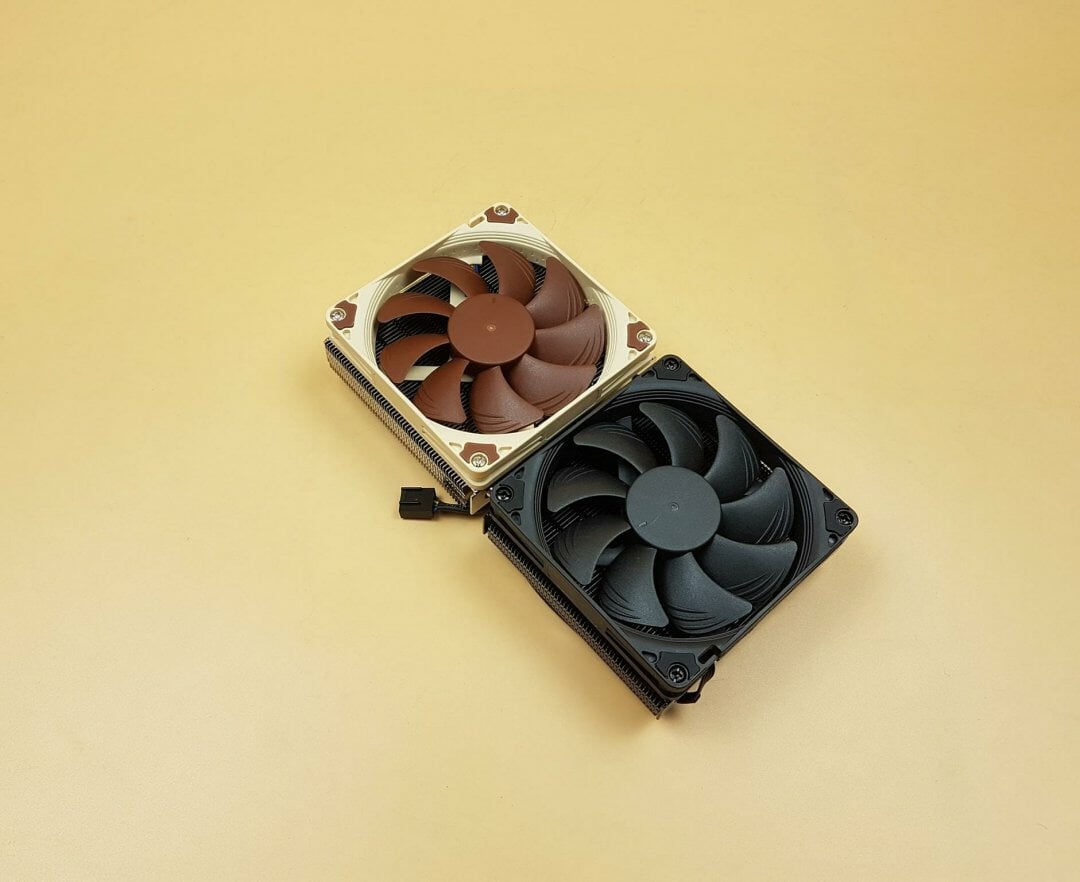 The Noctua NH-L9i-17xx and its chromax.black edition is Low-Profile CPU Coolers. The total height of the cooler is just 37mm including the fan. This small footprint makes it an ideal cooler for your HTPC and SFF builds with CPUs. Overclocking is not in the book for these cooler and Noctua has specifically mentioned this on their website. The supplied fan is NF-A9x14 and it’s chromax.black edition with 14mm being the overall height of the fan. The heatsink has two copper-based heat pipes. The chromax.black edition has these pipes in black coating and nickel plating. The copper base is nickel coated. The mounting bars come pre-installed on the cooler. We are covering both coolers in the same content as they are essentially similar coolers. 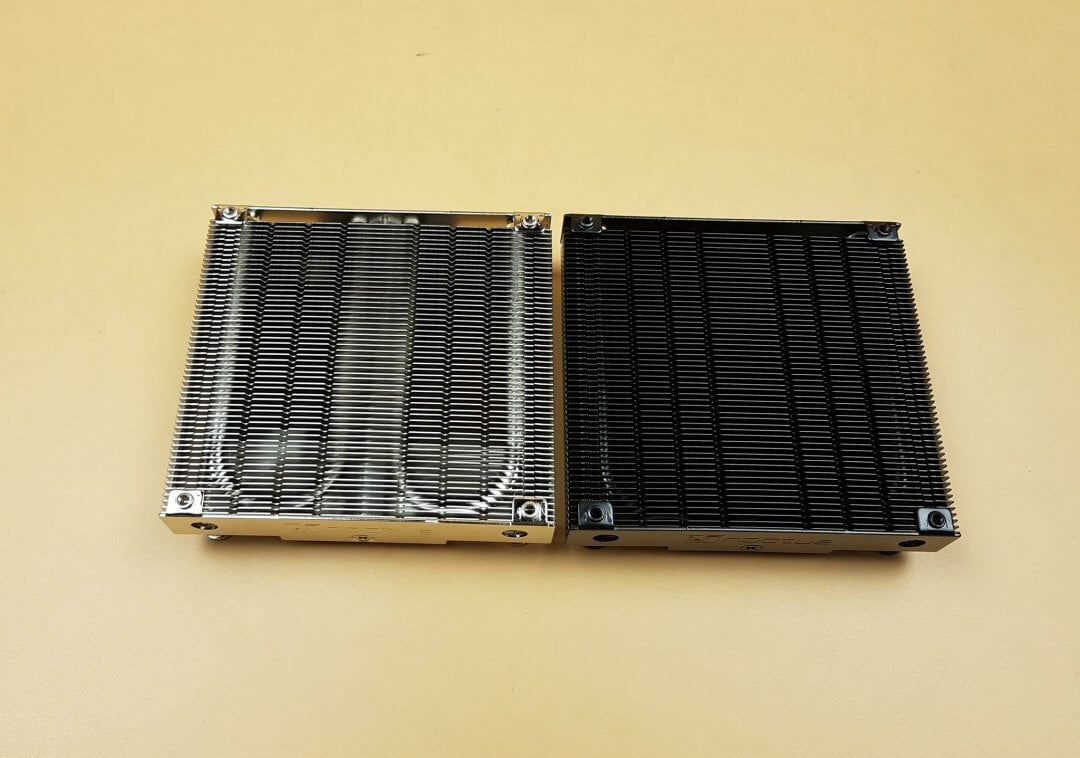 The heatsink consists of 55 aluminum fins which are stacked together to form a dense stack. The fins are soldered to the heat pipes and the complete assembly is nickel plated. The chromx.black edition is in a completely black color coating. Taking a look at the main heatsink, there are grooves and raised edges giving more surface area. The fan is not mounted using metal clips but screws for which two plates are installed on the front and rear sides of the heatsink. These plates have mounting holes on which the fan is installed. The displacement of the two 6mm heat pipes inside the fin stack can be seen clearly. The middle portion is appearing darker which is due to the reason that the base side of the heatsink has a stepped design with a copper base and pre-installed mounting bars. The heat pipes are in U shape. 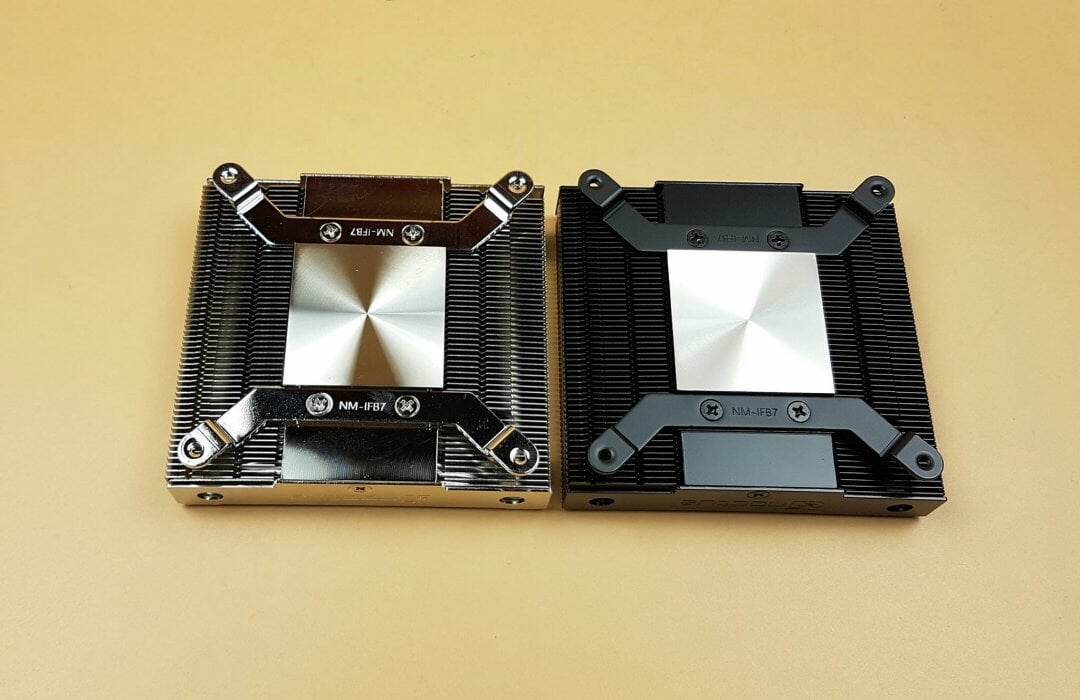 The copper base is nickel coated with mirror polished with 40x40mm size approximately. The Intel mounting bars are pre-installed using 4x screws in total. Each bar has an offset raised mounting corner. Each corner has a tapped hole so that the provided screws can thread in easily. 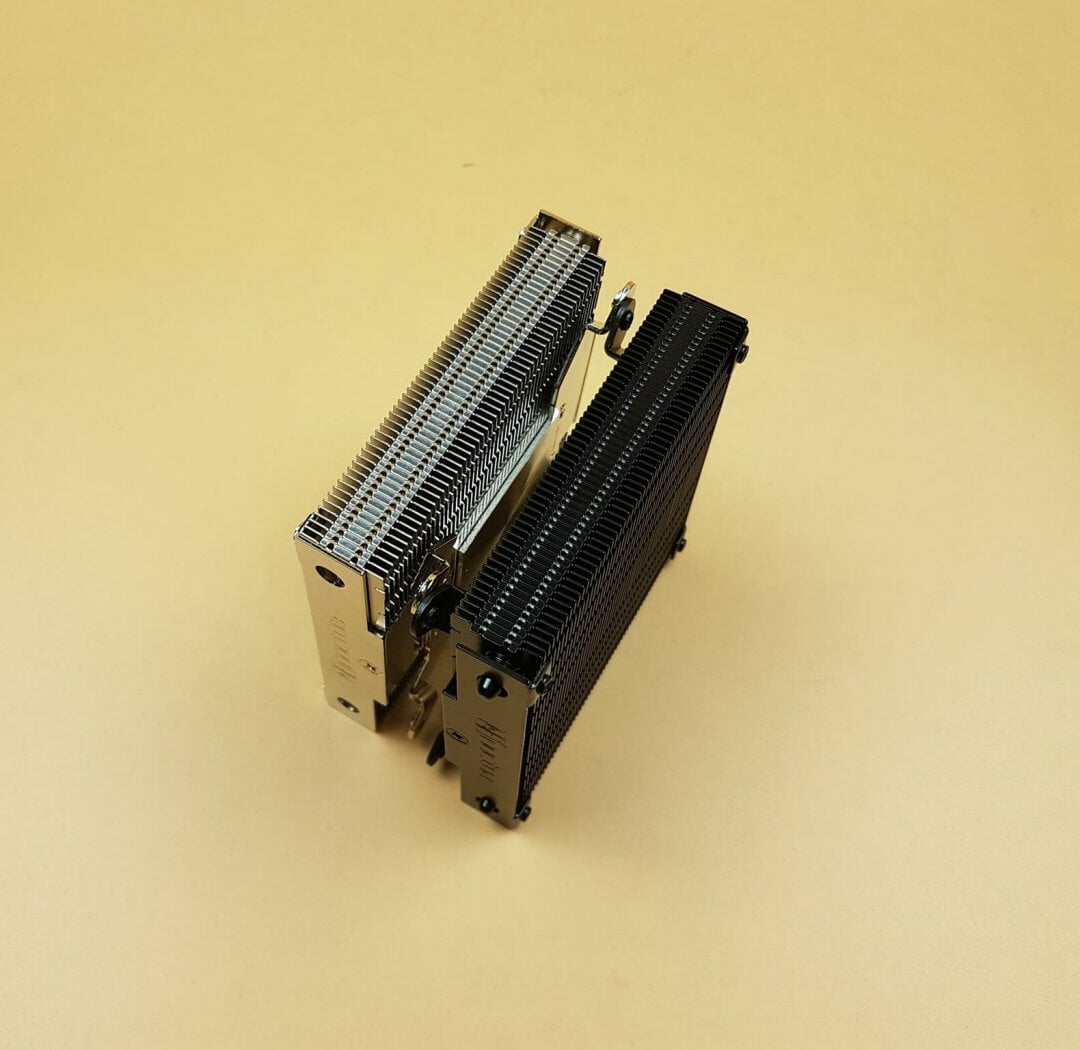 The left and right sides of the cooler are identical in layout. The fins have joined assembly on these sides. This angle is giving a better idea of the stepped heatsink design and offsets the mounting corners of the mounting bars.

The front side of the heatsink is showing the Noctua brand name and logo embossed on the top plate. The plate can be removed by removing a single screw in the middle. There are arrow symbols on the fan frame. These are there to provide a visual aid to the user in determining the direction of airflow and blades’ spin direction. 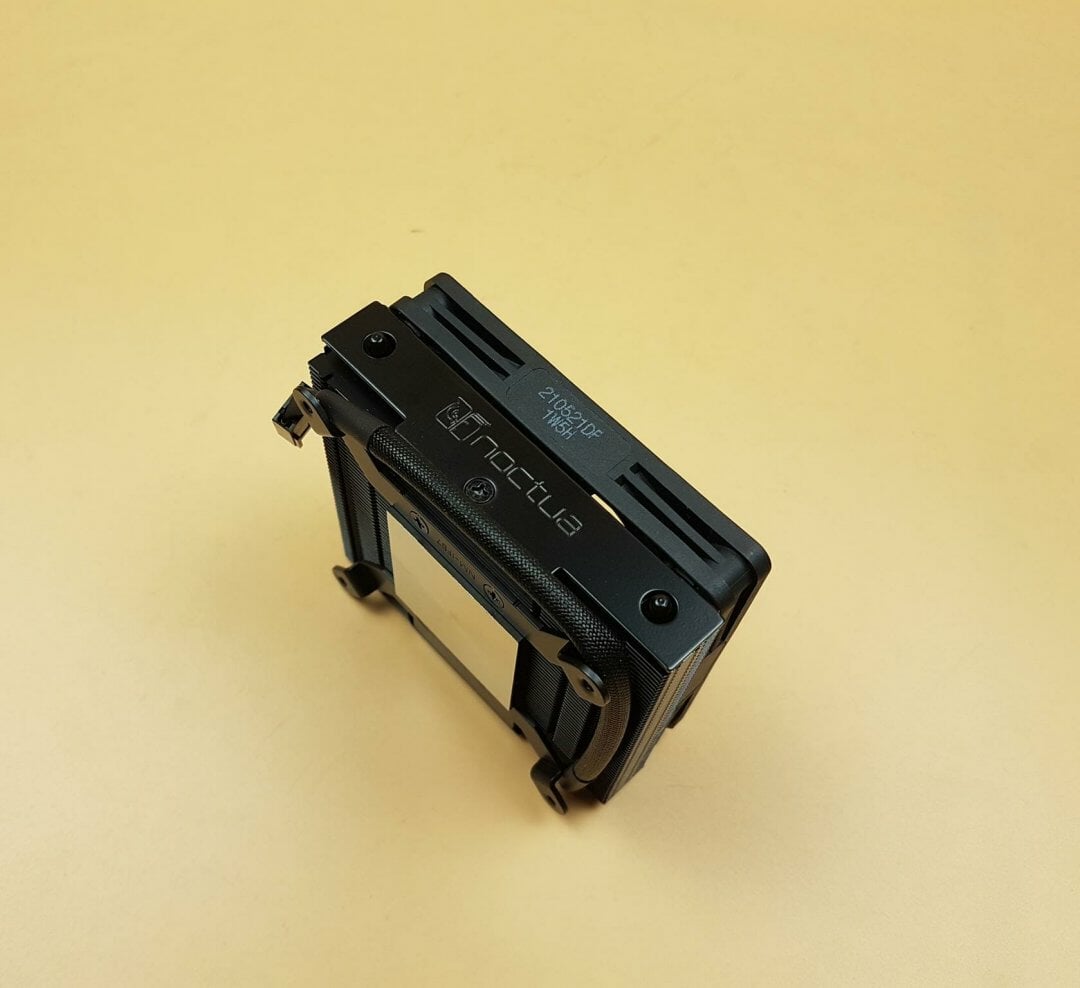 This side has an identical layout as we have seen on the opposite side. The only difference is the tips of the heat pipes are visible here. 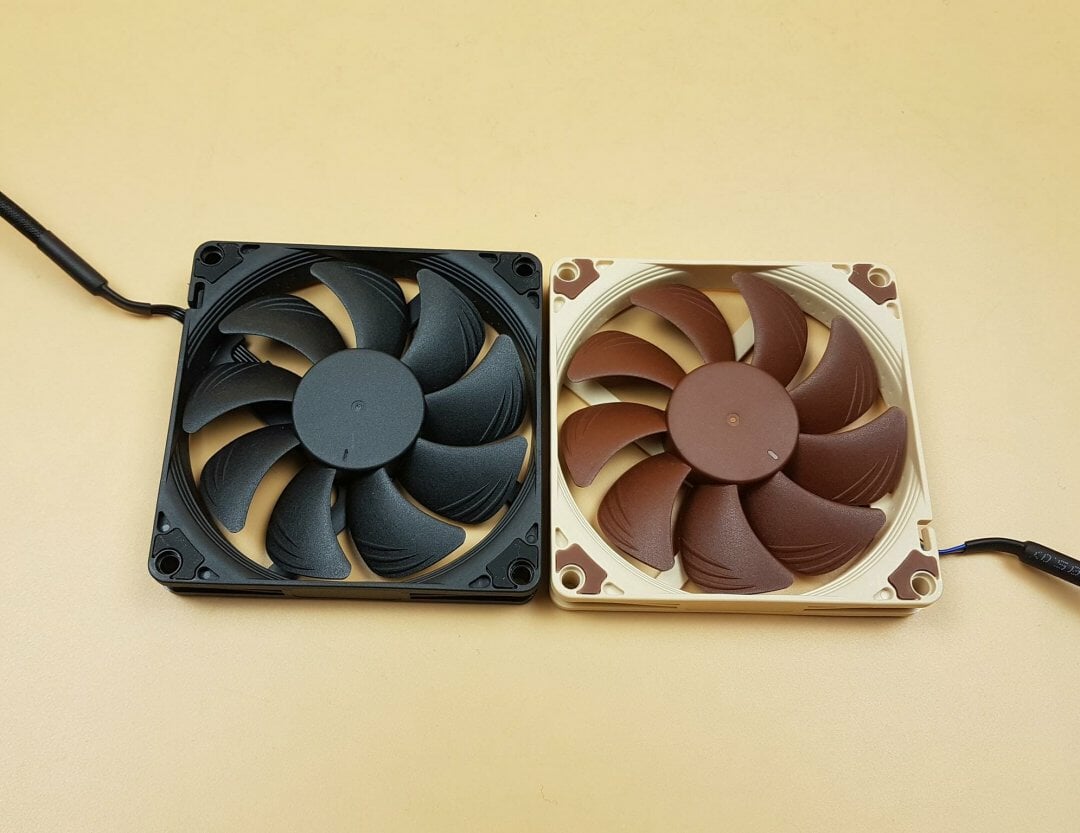 Noctua has supplied its premium NF-A9x14 and its chromax.black edition fan with the regular NH-L9i-17xx and NH-L9i-17xx chromax.black coolers respectively. This fan has dimensions of 92x92x14mm. User can also mount a 92x92x25mm fan on this heatsink. This fan is using Noctua’s legendary SSO2 bearing. There are 9 blades heptaperf impeller. The anti-vibration pads are in black color as well. The frame of the fan is following the same stepped inlet design with the same inner surface microstructures.

Here are the specifications of the fan: 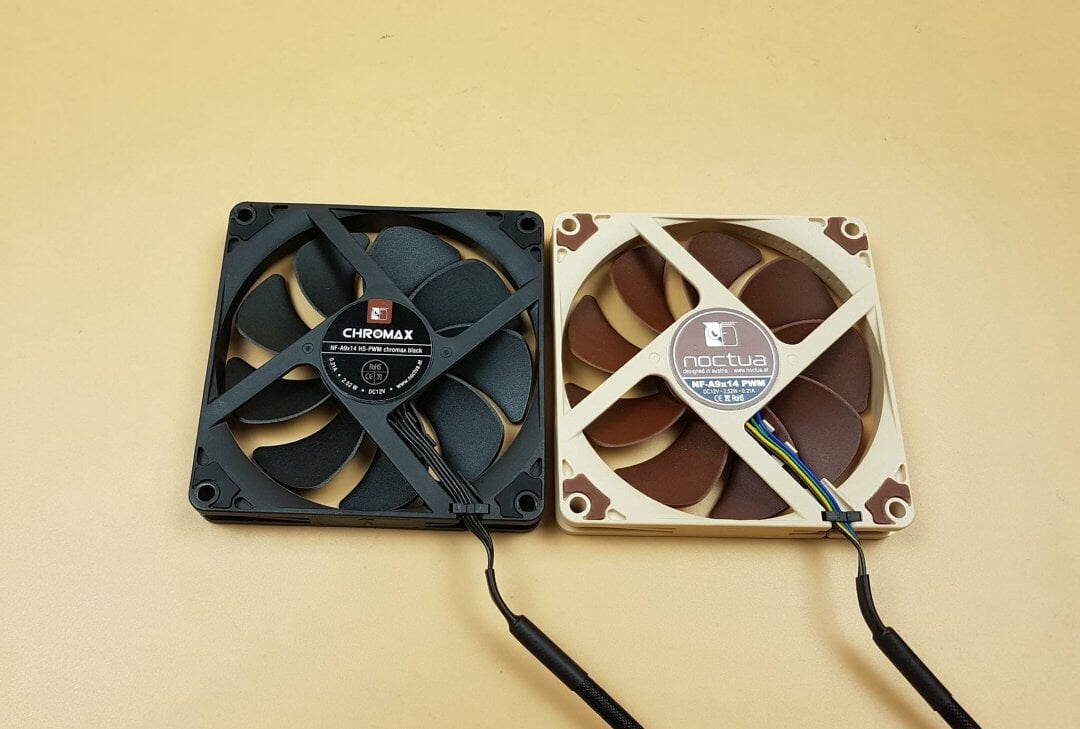 There is a 4-arm assembly on the backside holding the motor hub and connecting it with the mainframe. There is a sticker on the backside of the fan. It has the Noctua brand name and the logo printed on it. The fan is connected using 4 screws. There is no push/pull option with this cooler. The cable’s length is approximately 210mm and it is using 4-pin PWM connector.

Noctua is using classification and NSRP scheme to rate their coolers for the thermal performance evaluation. This is their internal mechanism and it is not a standardized one hence we can only compare the Noctua coolers on this criteria.

Noctua has rated their NH-L9i-17xx and its chormax.black edition to be compatible with the Intel i7 12700k and kF CPUs with low Turbo/Overclocking Headroom. This implies that these coolers can handle the load on base clock frequencies on these chips with a little margin for the turbo boost clocks.

The cooler was tested on the GIGABYTE Z690 AERO-G motherboard using the LGA-1700 socket. The installation of the cooler is straightforward.

This would complete the installation. 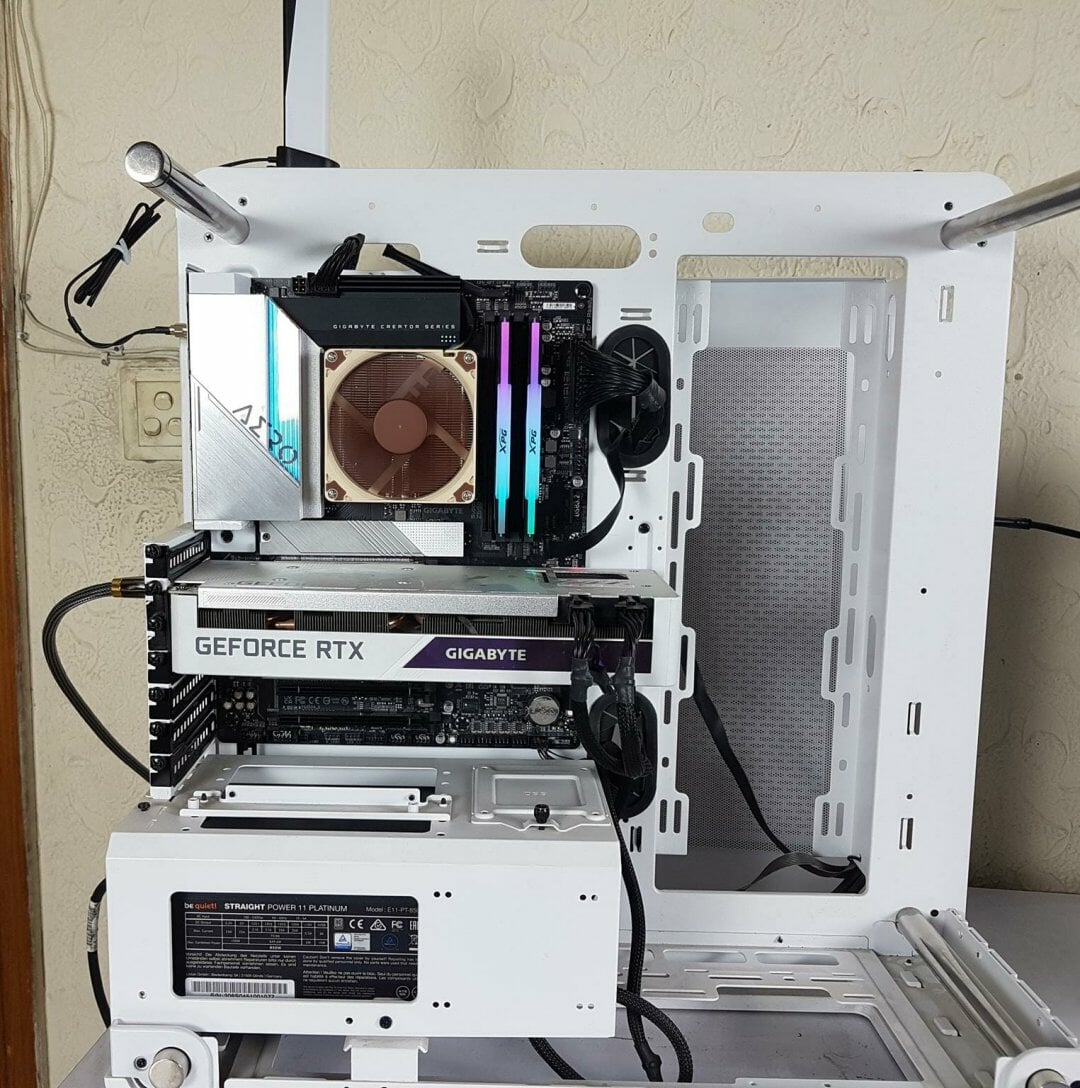 This cooler is intended for the SFF or HTPC form factor builds though not limited to them only. This cooler has a height of 37mm and bears a slim design which makes it 100% compatible with the RAM and PCIe slots.

The following configuration is used for the testing:

Important parameters for the testing are:

Windows 10 was used for the testing.

This is a kind of expected performance, particularly for the AVX load. When it comes to the low-profile coolers and hybrid architecture, the given load type is of more importance. These coolers can’t handle AVX sort of loads with all settings on Auto or even on Turbo Boost clocks. This is why we tested the gaming load as well and the cooler has performed quite well as the cooler was able to maintain near 4700MHz clocks on the P-Cores and 3600MHz on the E-Cores under gaming load.

Here is what Noctua has mentioned on their website. “The NH-L9i is a highly compact, quiet low-profile cooler designed for use in small form factor cases and HTPC environments. While it provides first-rate performance in its class, it is not suitable for overclocking and or CPUs that create high heat loads. Please consult our CPU compatibility list to find out whether the NH-L9i is recommended for your CPU.”

The cooler was hardly audible.

Noctua has released dedicated NH-L9i-17xx and NH-L9i-17xx chromax.black low-profile coolers for the Intel LGA 1700 socket using the Alder Lake platform. The chromax.black edition is an all-black version of the regular NH-L9i-17xx cooler. Both of these coolers retain the same footprint as we have seen on the previous NH-L9 series coolers.

Both these coolers retain all the features and functions of the previous versions with the major difference being the socket compatibility and a bit more weight on the new coolers. These coolers have a total height of just 37mm including the fan which has a height of 14mm. This small footprint makes it an ideal cooler for your HTPC and SFF builds with easier access to near-socket area components. This small footprint also gives universal clearance for the RAM and PCI slots.

The dimension of the heatsink is 23x95x95mm (HxWxD). The 23mm is the total height of the heatsink. The dimension of the cooler is 37x95x95mm (HxWxD). 37mm is the total height of the assembled cooler (heatsink and fan). The weight of the heatsink alone is 355gm whereas it is 430gm with the fan. These coolers have 55 aluminum fins which are soldered with the 2x copper heat pipes and the nickel-plated copper base. The chromax.black edition has complete assembly in black coating. The heatsink has a stepped design at the bottom giving more surface area for effective heat dissipation. The mounting bars come pre-installed on the cooler.

Overclocking is not in the books for these cooler and Noctua has specifically mentioned about this saying, “The NH-L9i is a highly compact, quiet low-profile cooler designed for use in small form factor cases and HTPC environments. While it provides first-rate performance in its class, it is not suitable for overclocking and or CPUs that create high heat loads. Please consult our CPU compatibility list to find out whether the NH-L9i is recommended for your CPU”.

The Noctua NH-L9i-17xx has an MSRP of USD/ERUO 44.90 whereas the NH-L9i-17xx chromax.black comes at an MSRP of USD/EURO 54.90 at the time of this review. In our testing, the cooler was used on an Intel i7 12700k CPU. For a low-profile cooler, the load type is of greater concern. One can’t expect the low profiler to perform that well as compared to a high-end air cooler or an AIO for that matter. We have seen our 420mm AIO struggling in keeping the temperatures down under AVX load with power restrictions lift-off or a bit relaxed on this platform. The Noctua NH-L9i-17xx just can’t handle AVX load. However, the cooler has performed quite well for the gaming load even on all Auto settings in the BIOS for the i7 12700k and this is where this cooler makes its case for the SFF builds for HTPC or gaming use. The cooler was able to maintain near 4700MHz clocks on the P-Cores and 3600MHz on the E-Cores under gaming load which is impressive. 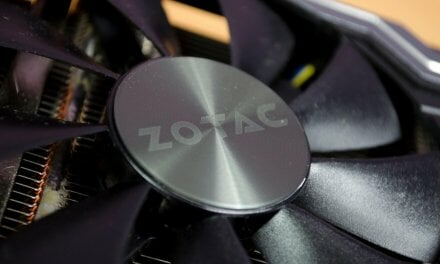 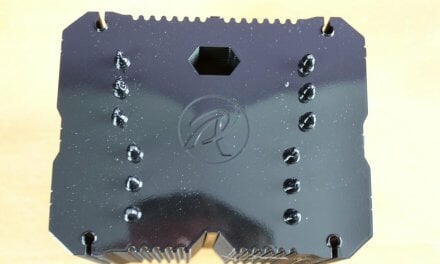 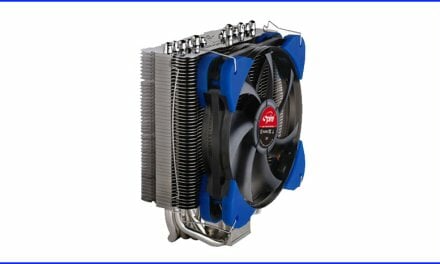 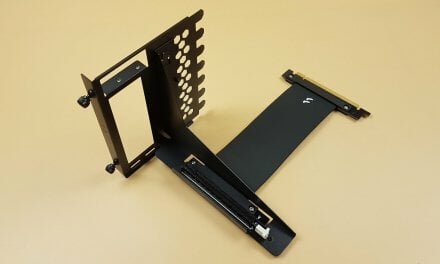