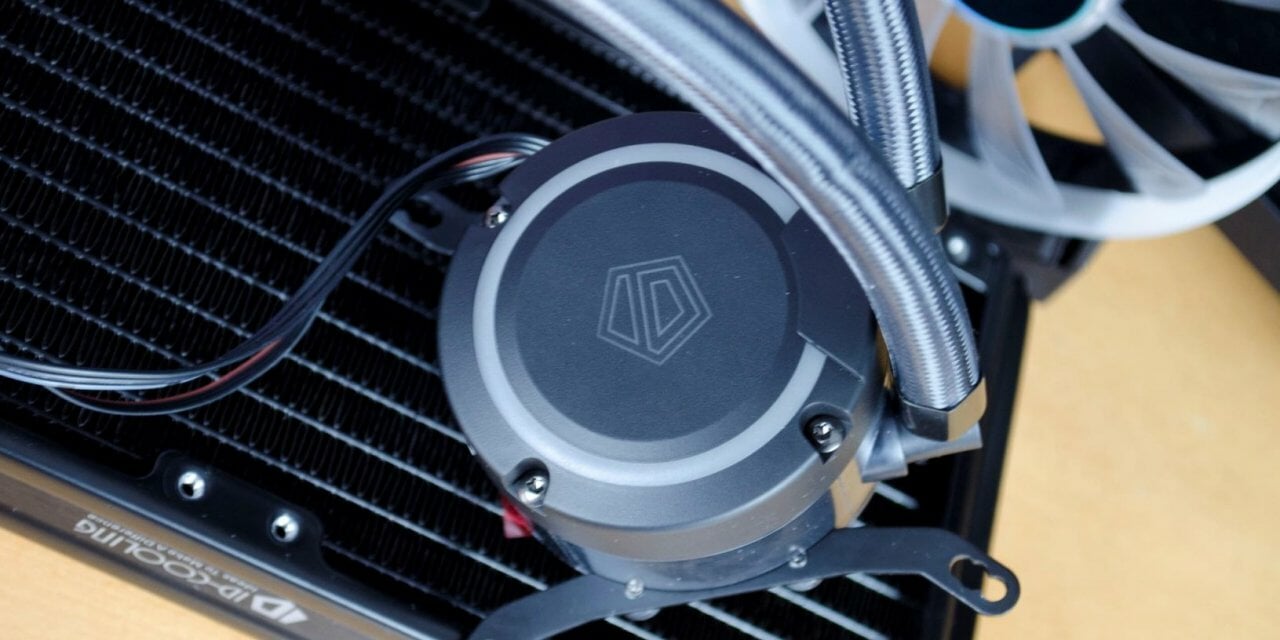 Today, ID-Cooling has been kind enough to send in their latest RGB AIO cooler by way of the AURAFLOW 240. Following on from our reviews on the FROSTFLOW 240L, it will be interesting to see what the AURAFLOW has to add to ID-Coolings AIO lineup. The AURAFLOW 240 is currently the only RGB cooler in the ID-Cooling catalogue and features support for most of the bigger motherboard manufacturers RGB software so you can link it with other products such as Motherboards, GPU,s and even RGB LED Strips! While there has recently been a massive influx of RGB products into the market, some people are still not a fan of it all. However, if you’re into all the RGB goodness, you will definitely want to check out this review and see what this bad boy is capable of.

The Auraflow 240 comes with two 120mm RGB fans that have a max RPM of 1,800. Combine that with a 200W TDP and being compatible with most Intel and AMD based motherboard sockets and we could have a real winner on our hands. Only time will tell how the Auraflow 240 will stand up but on paper, it looks the business! ID-Cooling has some amazing products and if you’re not really familiar with them, it is definitely worth looking at some reviews of their products. Alongside the Frostflow 240l, we also looked at the 120mm variant the Frostflow 120 and were quite impressed with it! Enough of all that though, let’s get back to the Auraflow 240!

The front of the box has a nice image of the cooler showing off the LED effect of the pump. The ‘ID’ logo in the centre lights up as does the outside ring. Both of these areas have RGB LEDs but we will look at that shortly! 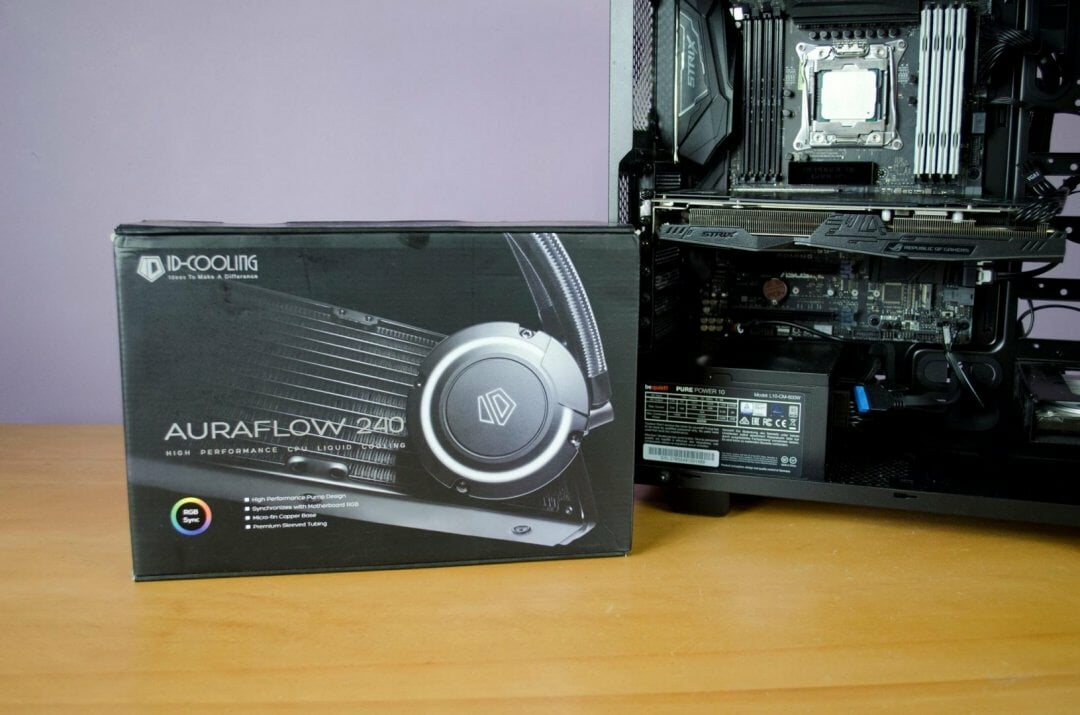 The two RGB fans feature 11 clear blades and they also have a ring that goes around the outside of the blades to help the LEDs illuminate more evenly. These fans feature a speed of 700-1,800 RPM so should offer sufficient cooling at load temperatures and should be fairly quiet when idling. 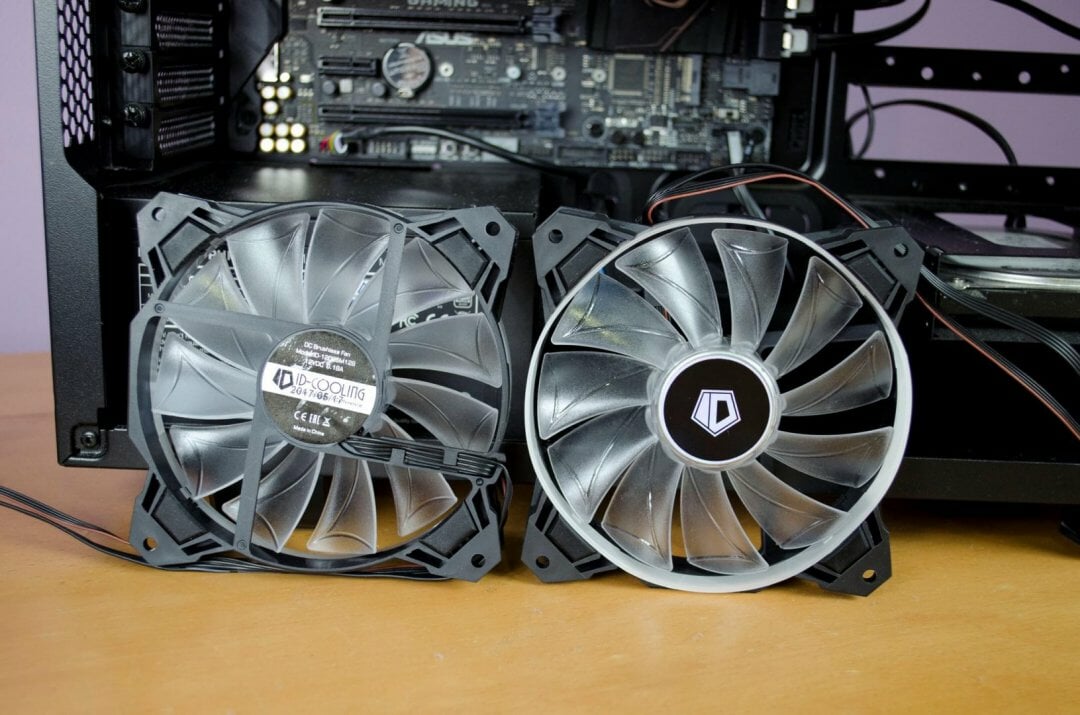 The fans have two plugs, the standard 4-pin PWM plug and another 4-pin plug which is for the LEDs. Using the included adapter, you can hook up to 4x different RGB devices to your motherboards RGB header should you have one. Once the fans are connected to your motherboard, you can then control them as you would any other RGB device you may have connected. 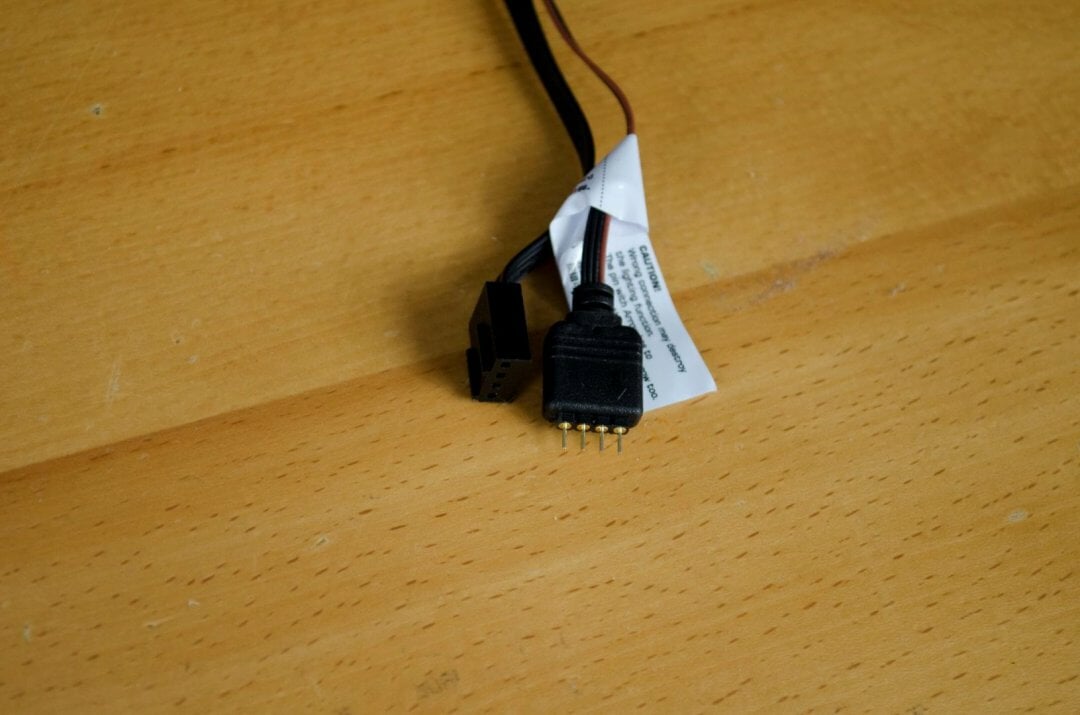 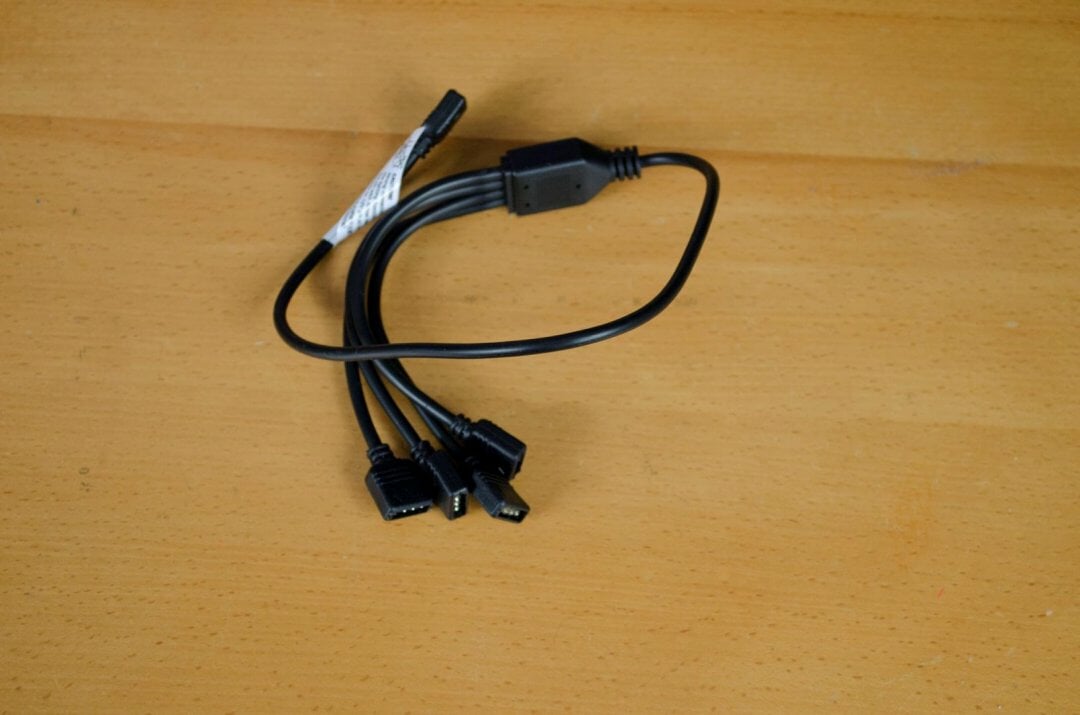 For those who don’t have an RGB header on their motherboard, you can use the below Molex connector to set a single colour of either Red, Green or Blue. While this does kind of defeat half of the cooler’s purpose, it is nice to see some sort of secondary LED function so it doesn’t totally go to waste should your motherboard not have an RGB header. 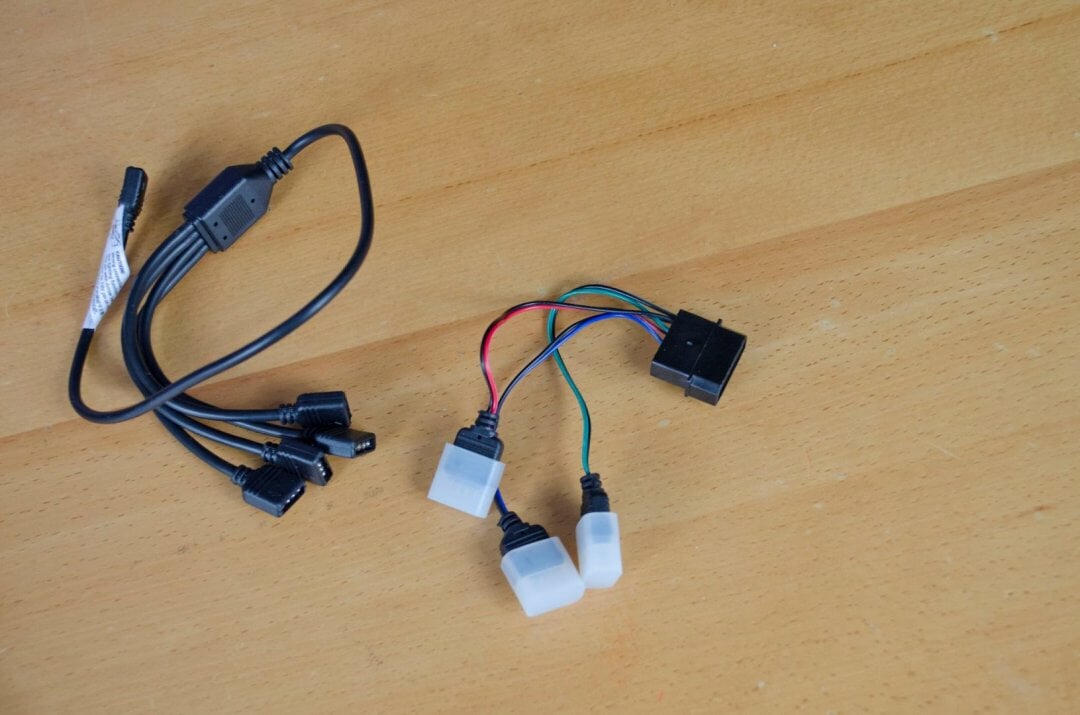 The side of the radiator that will likely be on display have a nice almost brushed aluminium look to it and features the ID Cooling logo and slogan. 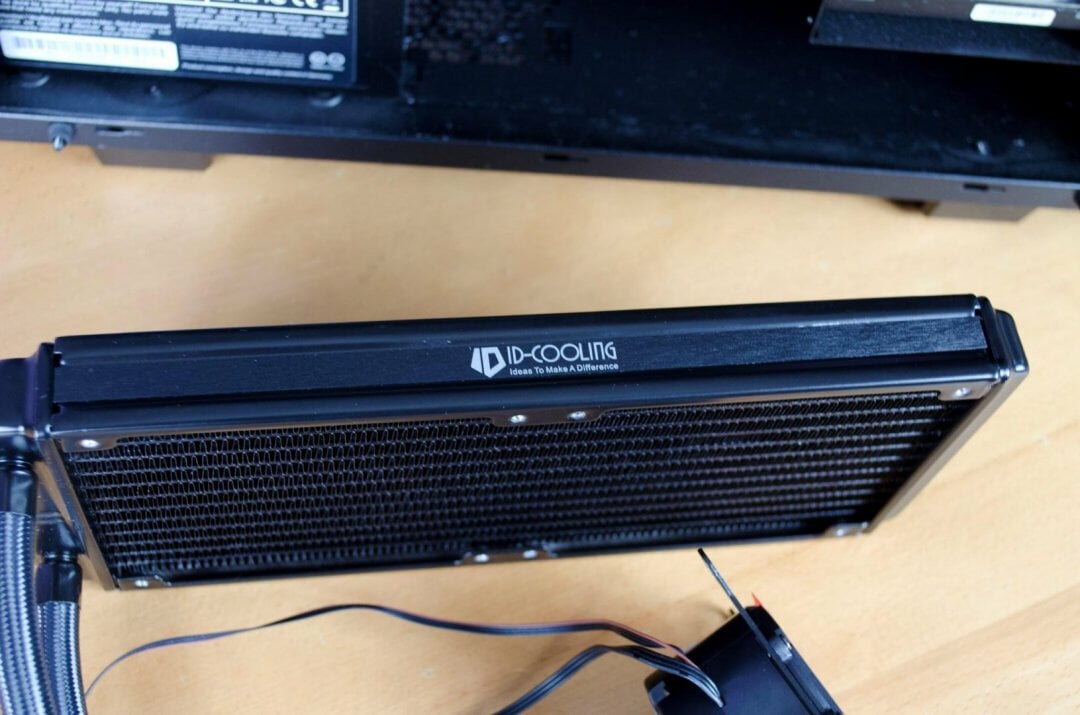 The radiator itself is a fairly standard aluminium one and has dimensions of 274×120×27mm. To keep things looking top-notch, ID-Cooling has added sleeved cables to the hoses to help with the overall aesthetics of the Auraflow 240. 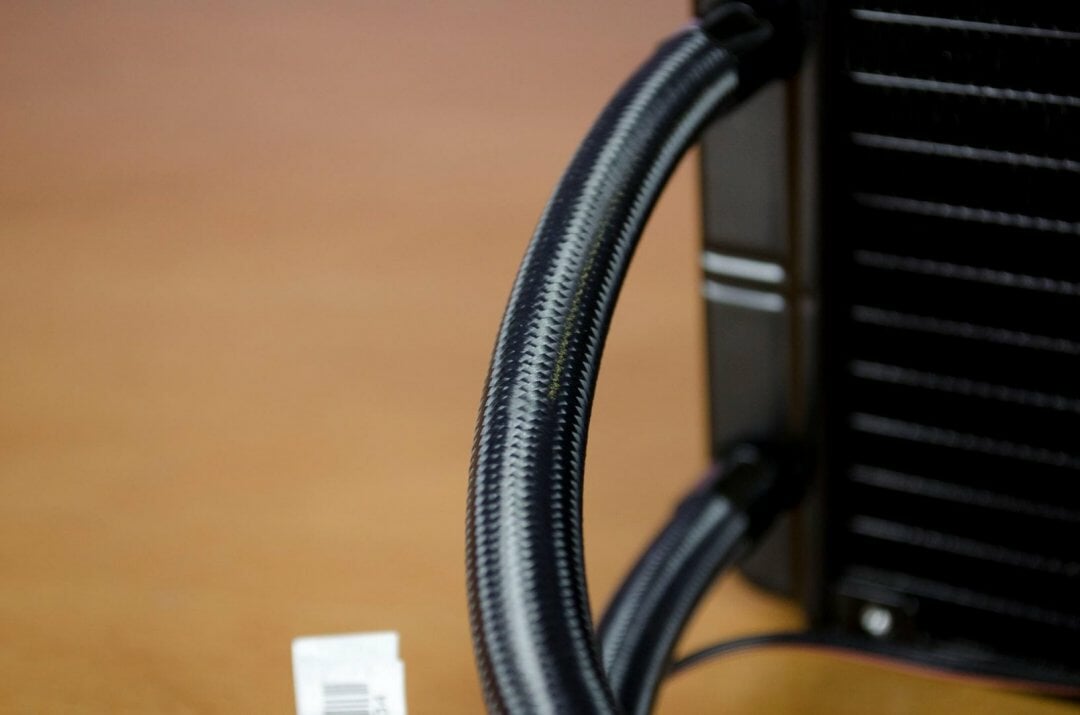 P.S. Yes,  we know the pump is upside down! This was done on purpose to better show of the RGB LED effects for this video.

The installation for the Auraflow 240 is similar to that of the Frostflow 240l. For those looking to see how either of these AIO’s is installed, please visit the Frostflow 240 review: CLICK HERE

For our testing, we use the Prime 95 stress testing program to make all the cores on our CPU run at 100% for 10minutes then we monitor them with CoreTemp and CPU-Z. We then take all the individual core temperature readings and add them up, then we divide that total by the number of cores and finally, we subtract the ambient room temperature to achieve our final result.

To have the best chance of having like for like results, all testing is done in a Cooler Master Master Case Pro 5 with both side panels off. 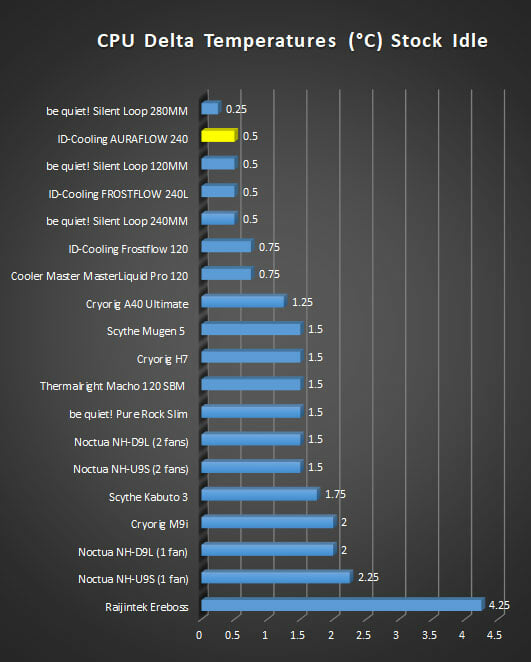 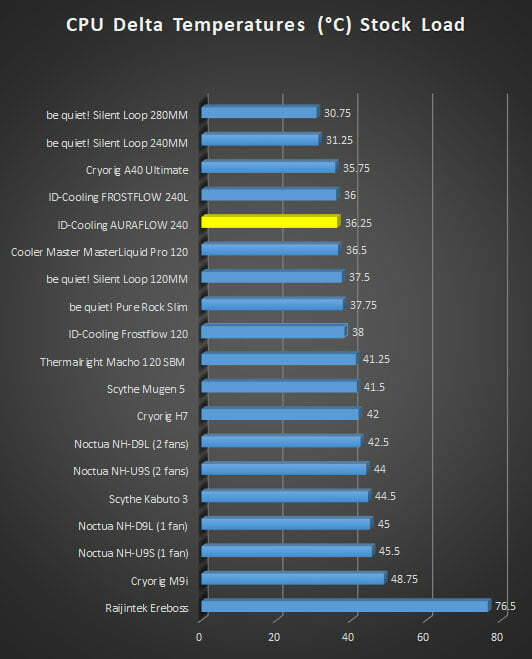 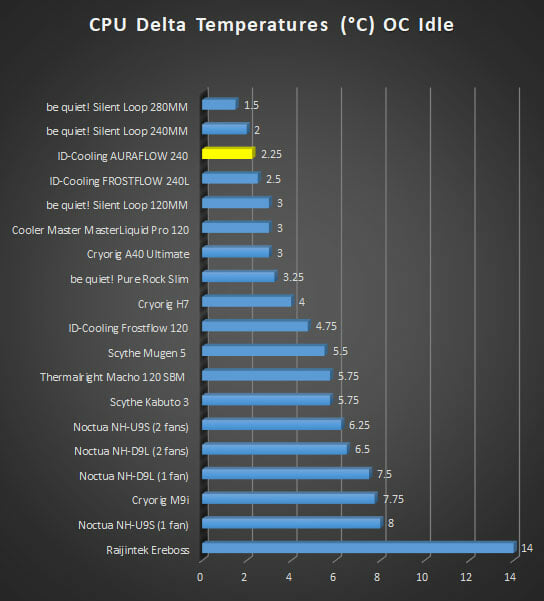 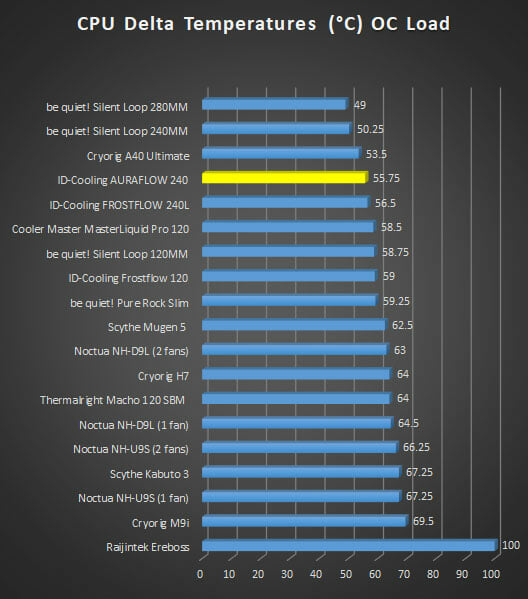 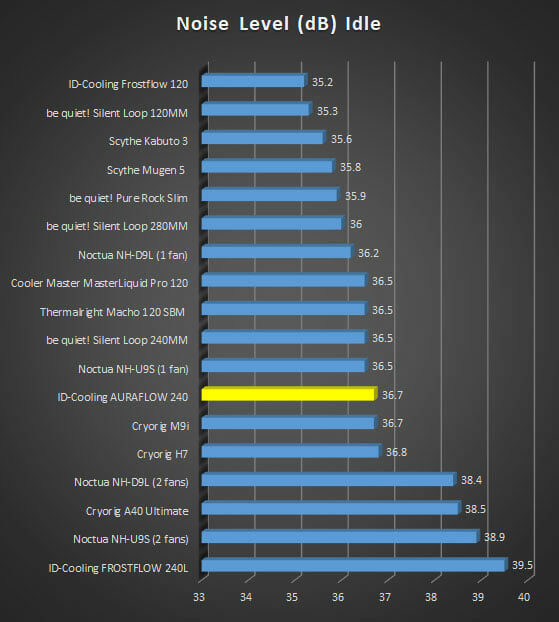 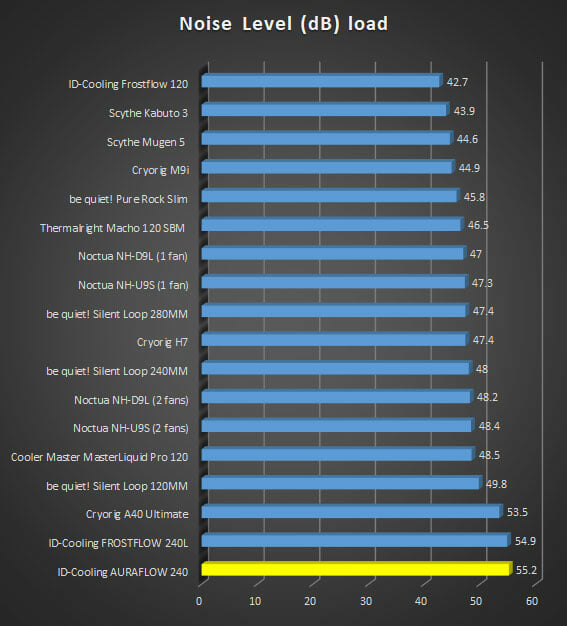 I used the ASUS STRIX Z270F Motherboard for my testing as it has a nifty little RGB Header on it. Now, as you can see below the software is very straightforward. During my testing, I only have the motherboard and the Auraflow 240 connected in terms of RGB products. Depending on the motherboard manufacturer you have, your setup may be a bit different but if you are used to controlling your RGB LEDs through the software then it will be easy as. The great thing is that if you have other LED strips, GPUs or any other RGB compatible device plugged in your can sync them all together and create some quality looking RGB effects. 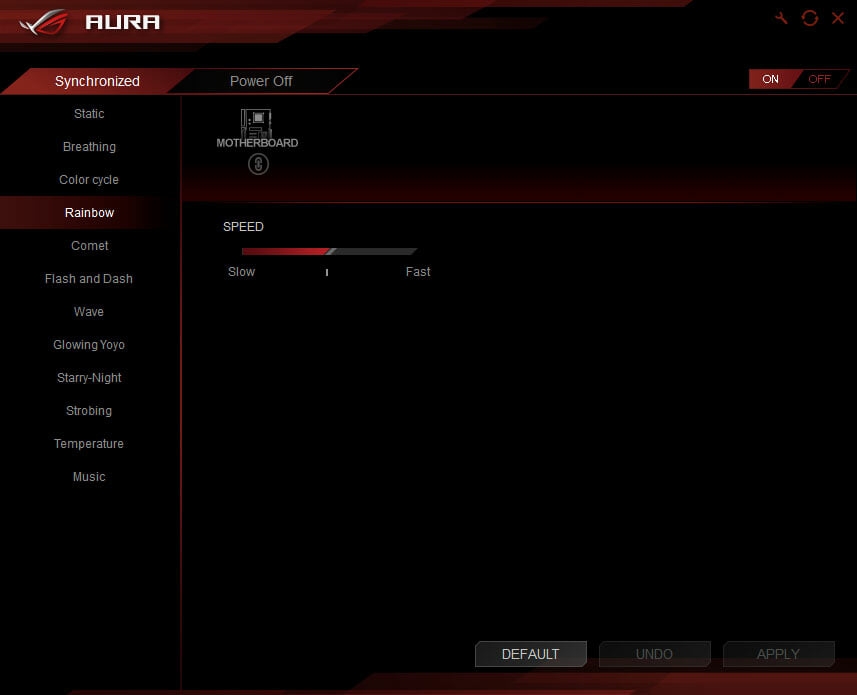 Putting the RGB aside for a moment and the Auraflow 240 is still a decent AIO cooler. While there is no denying the fans make a bit more noise than we would like to see, this can easily be masked and maybe even overlooked in the right scenario. While the Auraflow 240 didn’t manage to top our charts, it wasn’t that far off and still offered more than sufficient cooling for our overclocked 6700k. While the cooling is on point, it would really be nice to see ID-Cooling work on the noise their fans output just a bit. It’s good knowing that they have no issue pushing air through a radiator but if we could knock a few dB off their noise output that would be superb.

Not only does the Auraflow 240 feature RGB LEDs that can be synced with your motherboard and other components, IC-Cooling went the extra mile and even sleeved the tubes to add to the overall aesthetic. ID-Cooling definitely has a thing for paying attention to smaller details and it always pays off for them. Even if for some reason you have to use the Auraflow as a bog standard AIO and not utilize any of the RGB features, it would still be a good looking AIO. Not only that, but ID-Cooling must’ve done something right with the internals of the block/pump combo and radiator as the cooling performance is on point.

Coming in at £90 or so here in the UK at the time of review, the Auraflow is a bit higher priced than we are used to seeing from ID-cooling. When it comes to the higher price, don’t let it put you off as overall, the Auraflow 240 is priced competitively especially when you remember the RGB capabilities it has. For the price, you are getting a cool that offers good performance, has RGB LEDs and should go great with most builds. If you’re looking for a 240mm AIO CPU Cooler this is definitely worth and look and if RGB LEDs is something you are into, you really can’t go wrong!

“The ID-Cooling AURAFLOW 240 is a great cooler that offers both performance and a pleasing aesthetic. My only gripe is the noise the fans output, if ID-cooling can get this down a bit, they would have a ‘Must Have’ product on their hands!”

Many thanks to ID-Cooling for sending in their Auraflow 240 for this review! 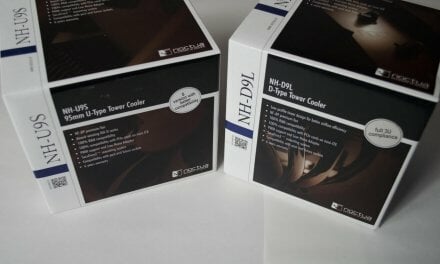 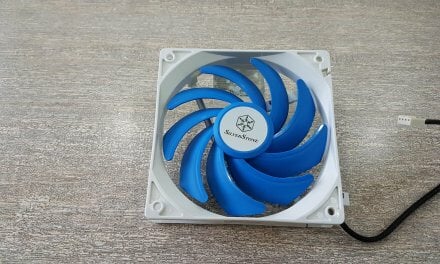 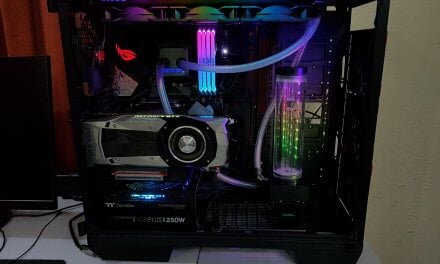 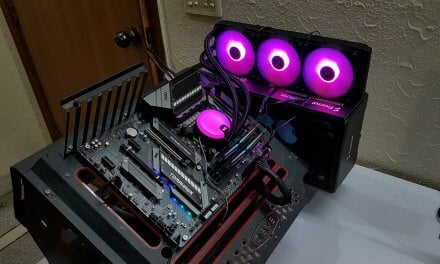