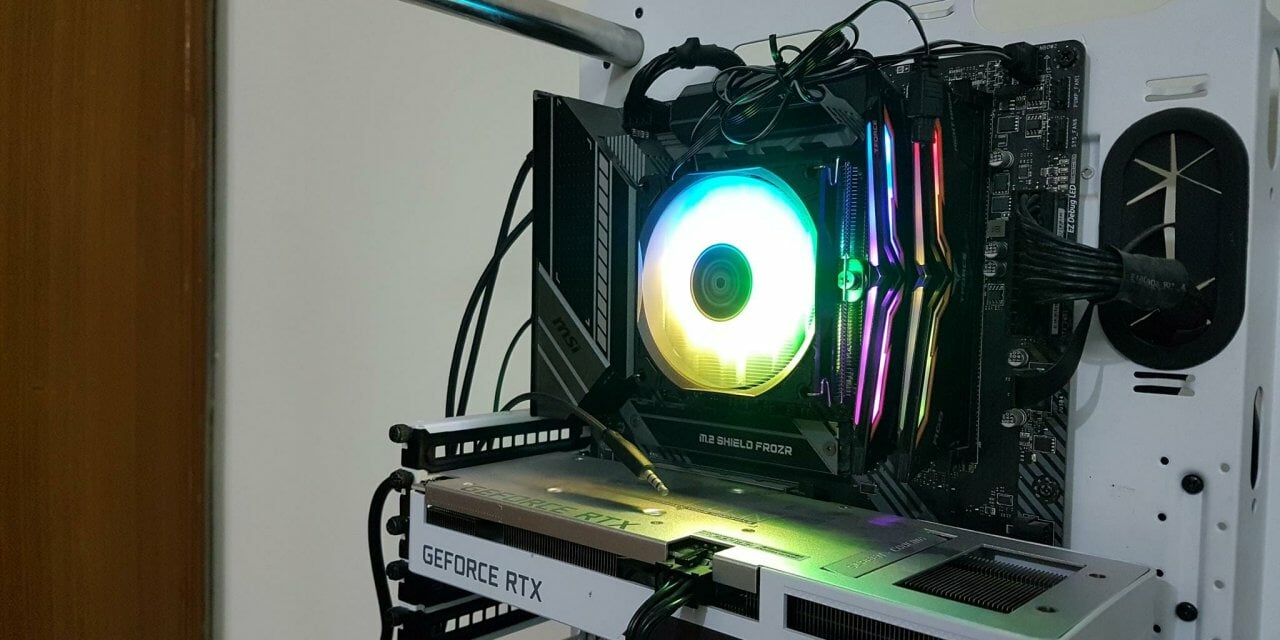 Low profile coolers are designed in top-flow orientation and are best suited for the ITX or SFF builds where there is a limitation around the CPU socket and the overall space constraint in the small-size PC Case. SilverStone has released a new low-profile cooler named Hydrogon H90 A-RGB. The salient features include: 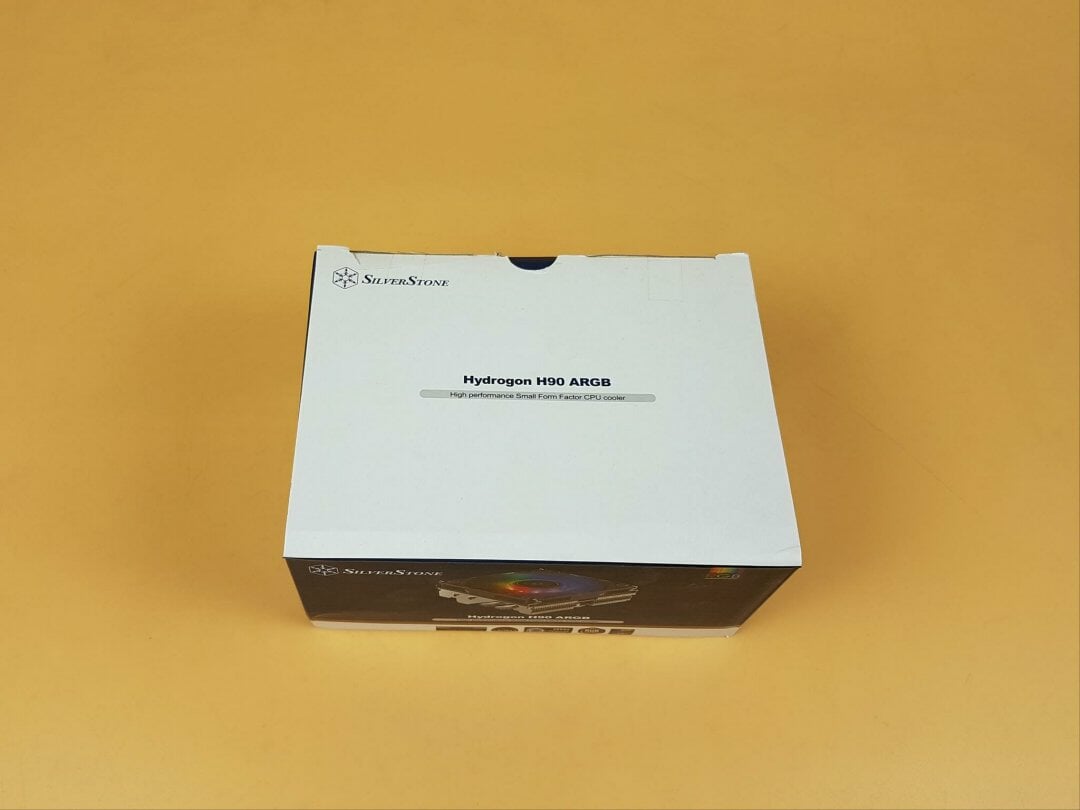 The cooler is shipped inside a cardboard packing box in the typical SilverStone theme. The model of the cooler is printed over the top. 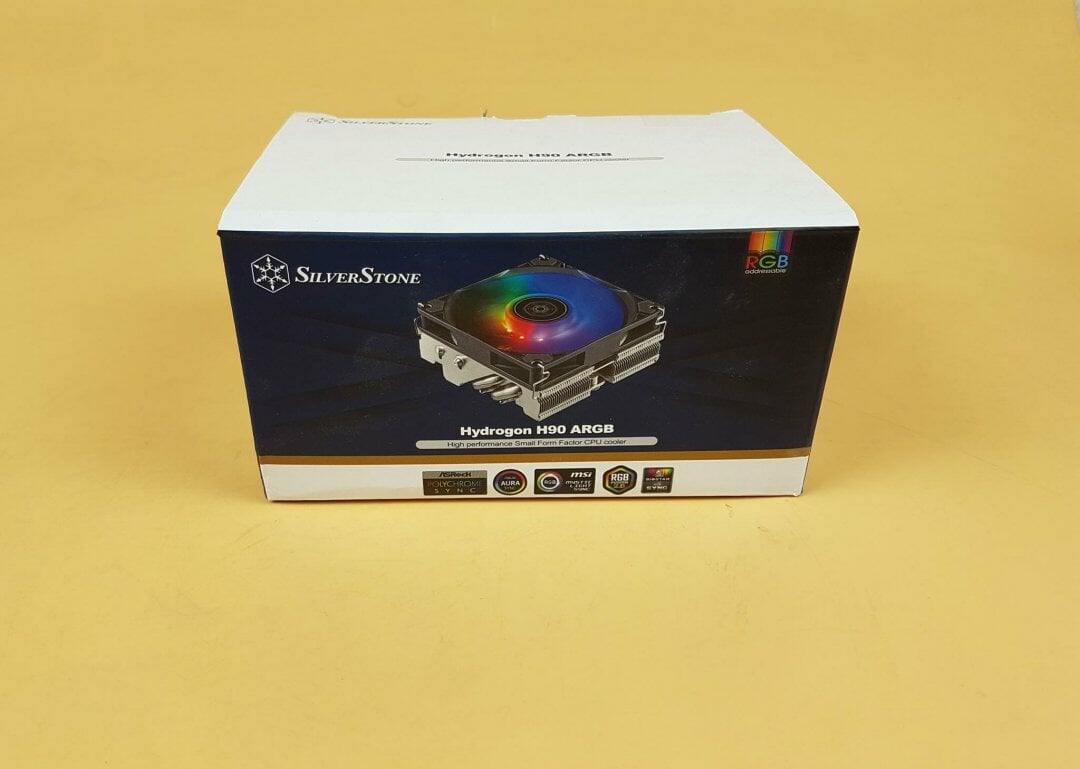 High performance, low profile CPU cooler is the tagline. The A-RGB elements are compatible with the leading motherboard manufacturers’ onboard solutions. 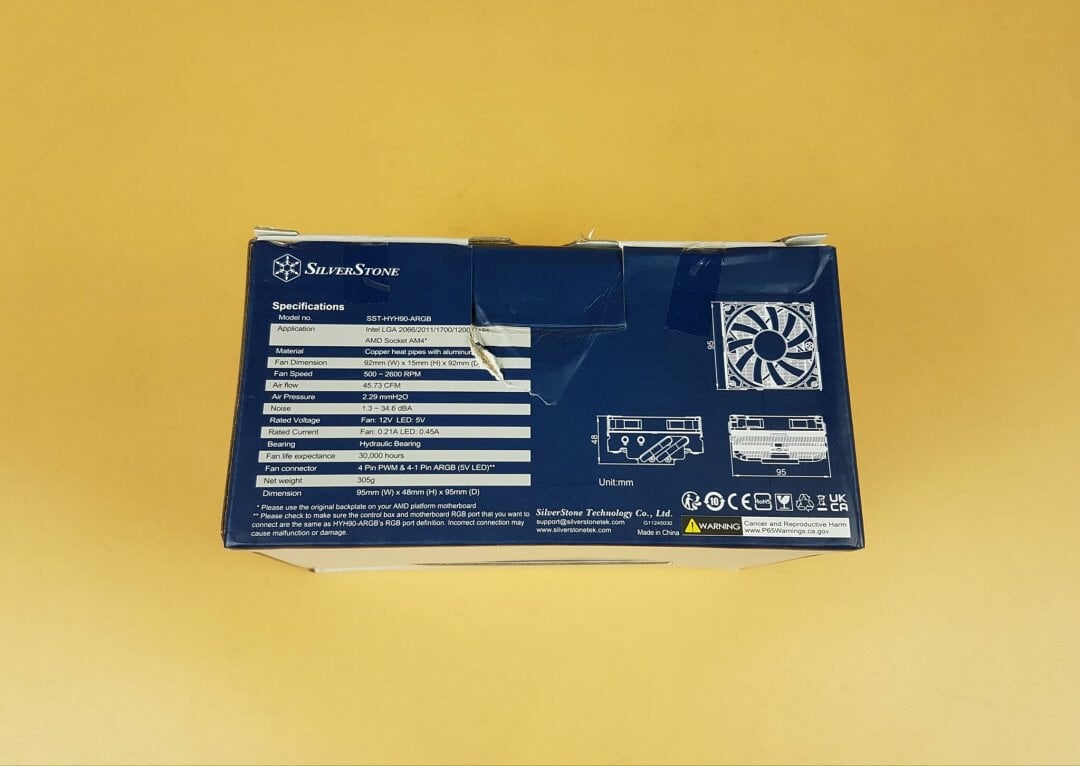 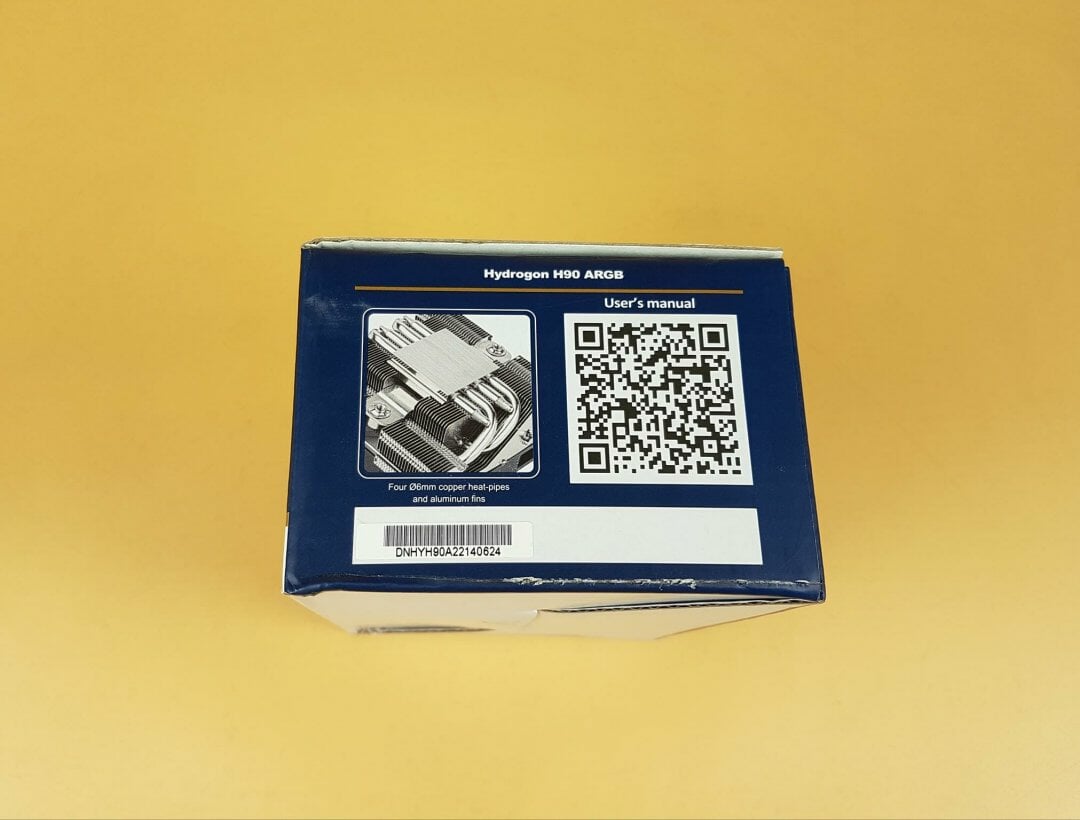 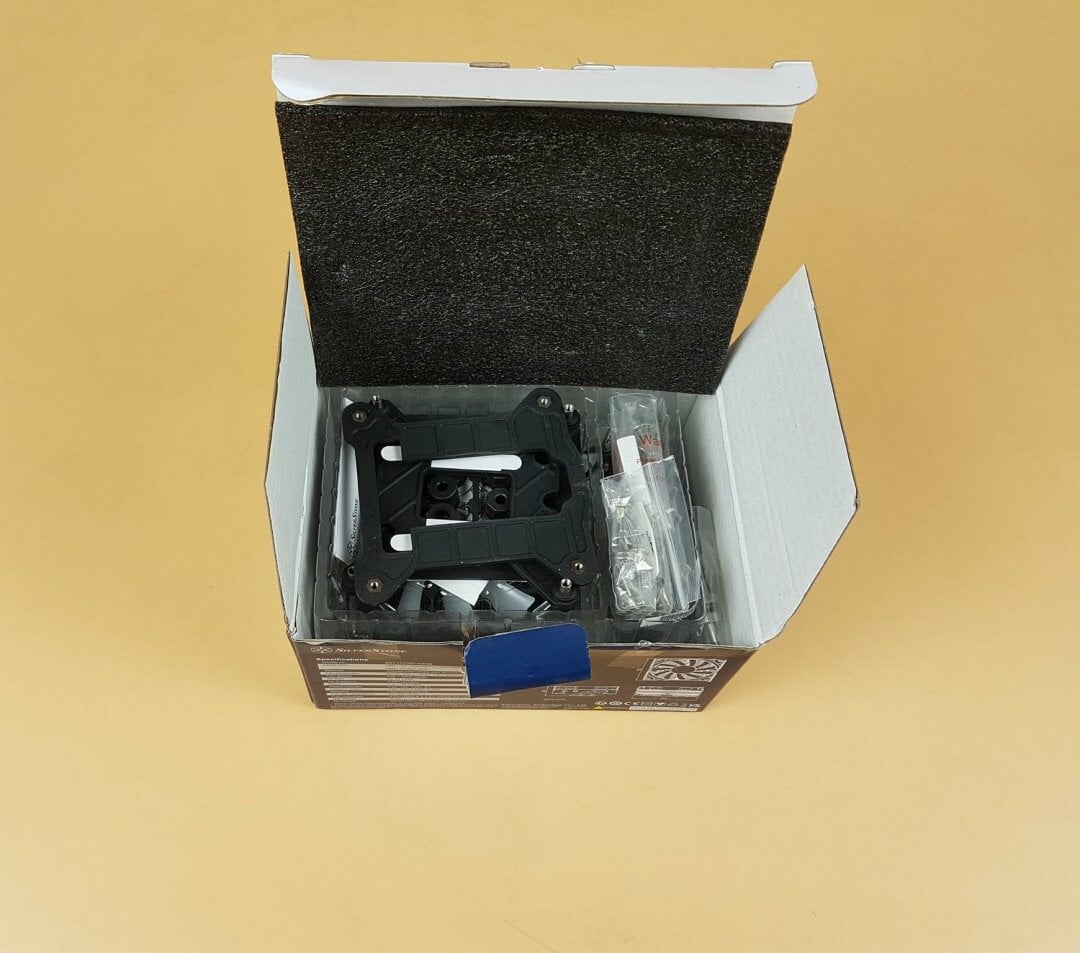 There is a transparent shell inside the box. The mounting hardware is placed on the top.

The SilverStone has provided a plethora of accessories for the installation. 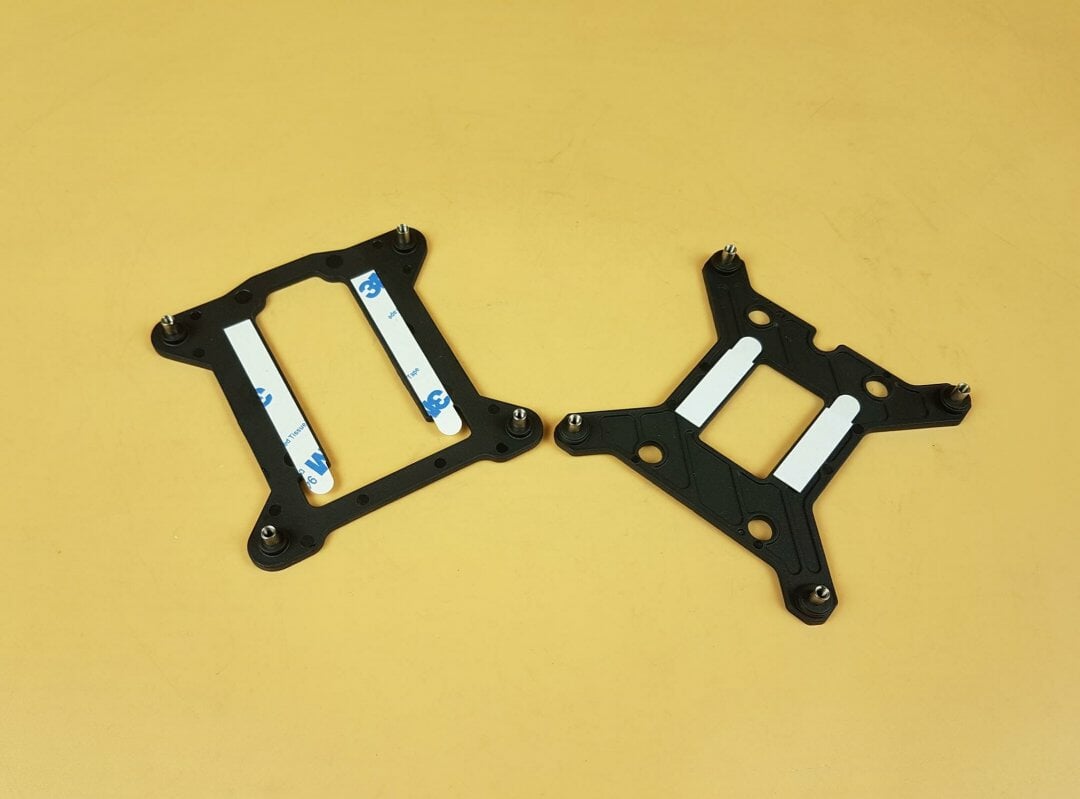 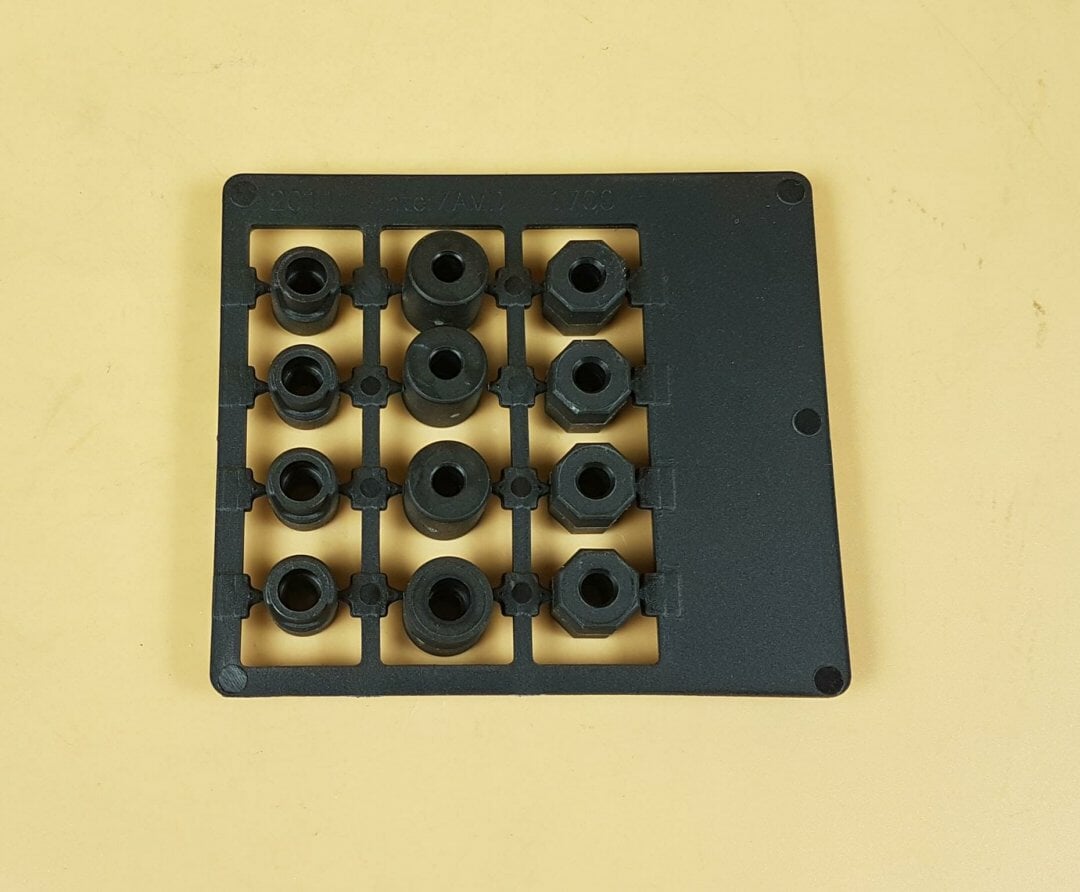 The above picture shows the spacers. I like the presentation though our sample came with the middle spaces out of the holder. Starting from the left: 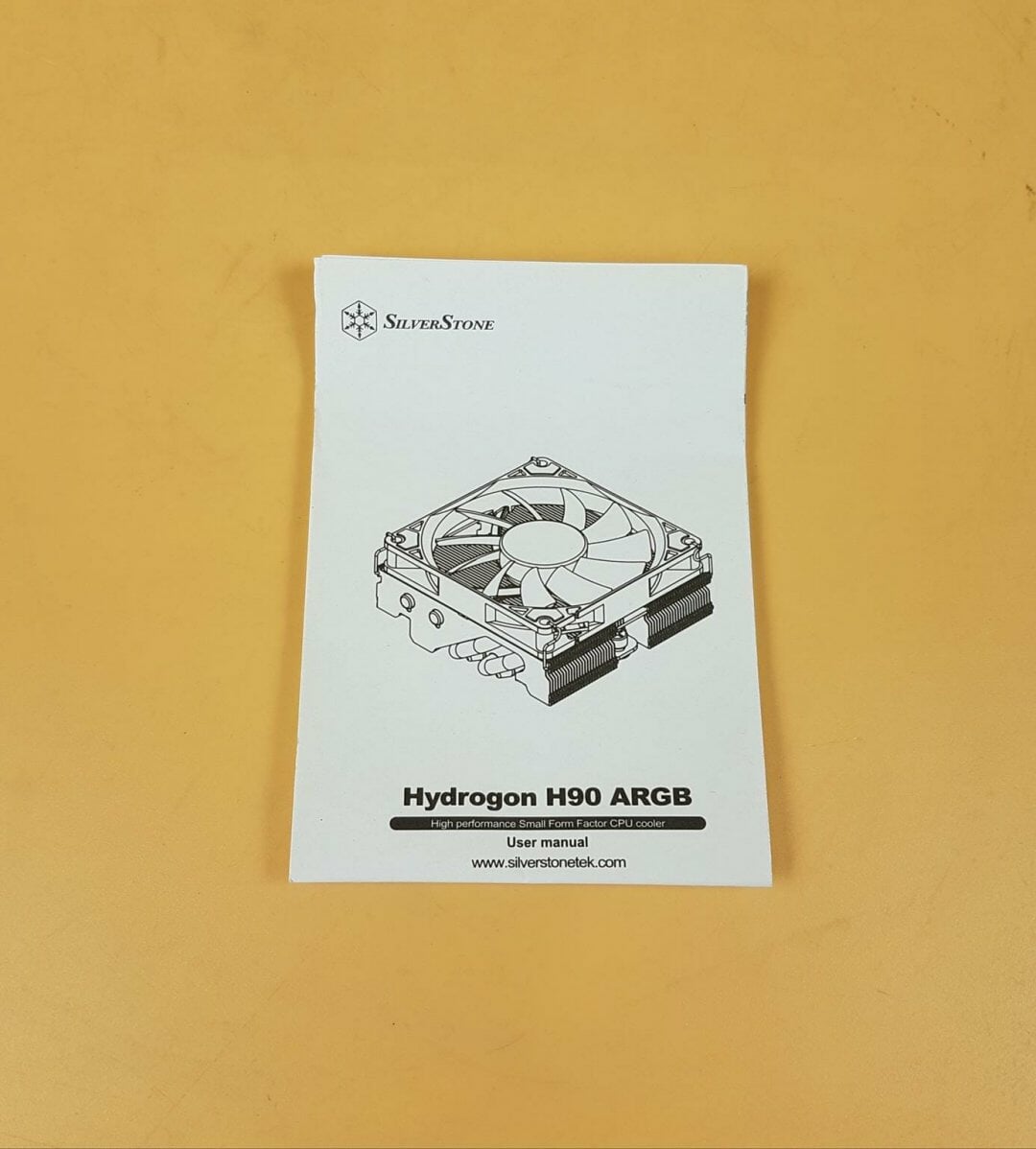 The user manual is somewhat comprehensive. 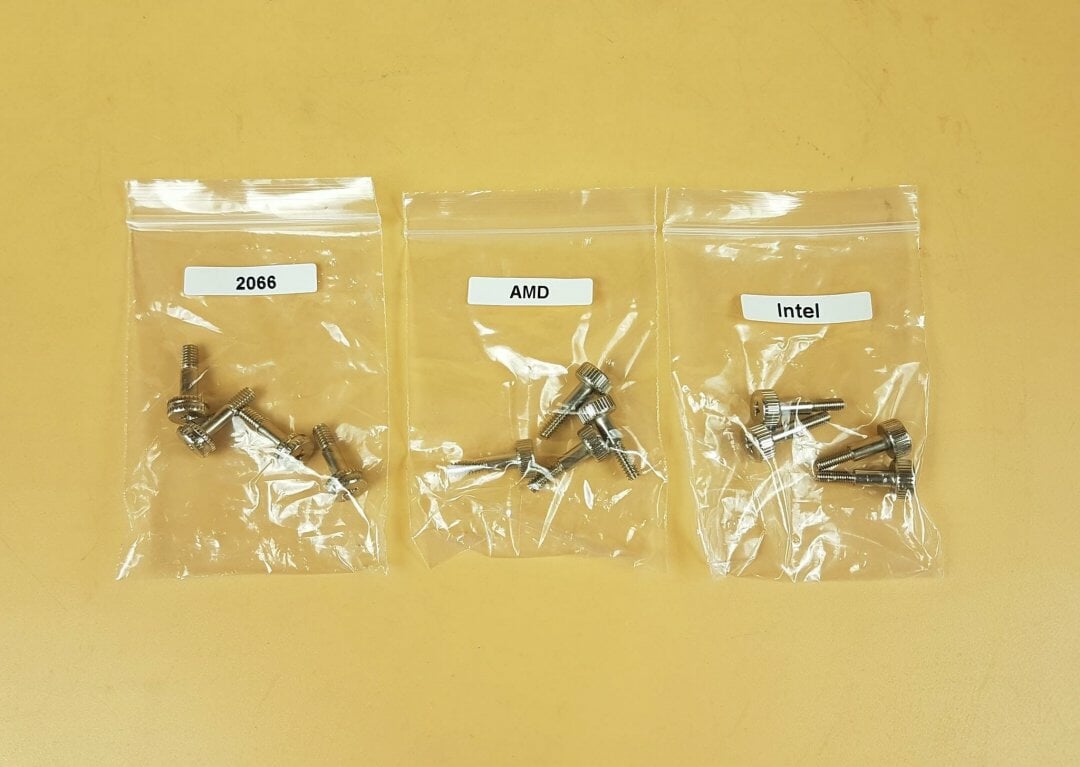 Similarly, SilverStone has provided 4x screws for each type of the mentioned socket. The container labeled Intel is for the LGA115x/1200 and 1700 sockets. 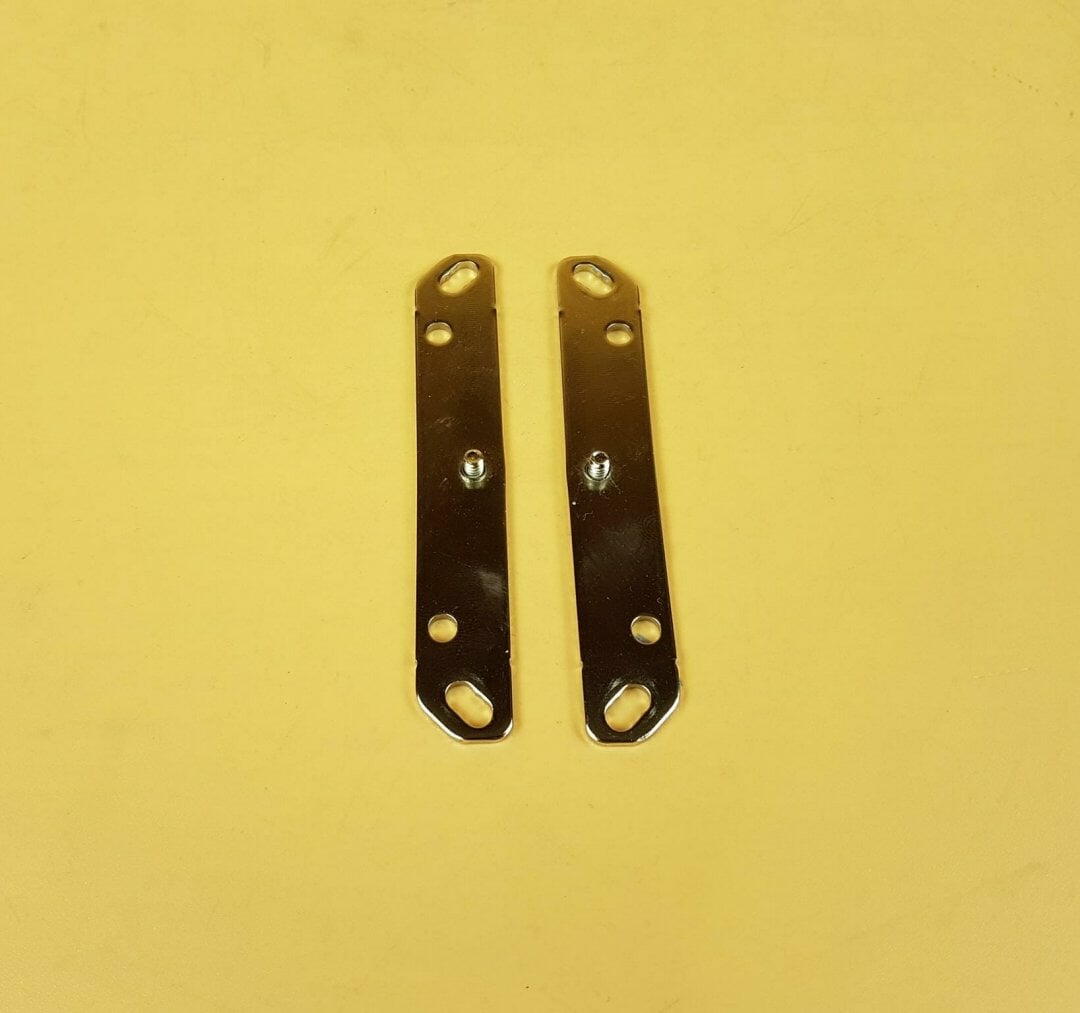 There are 2x mounting brackets. Look closely and you will find small arrow symbols on each. When installing, make sure that arrows are pointing towards the socket. 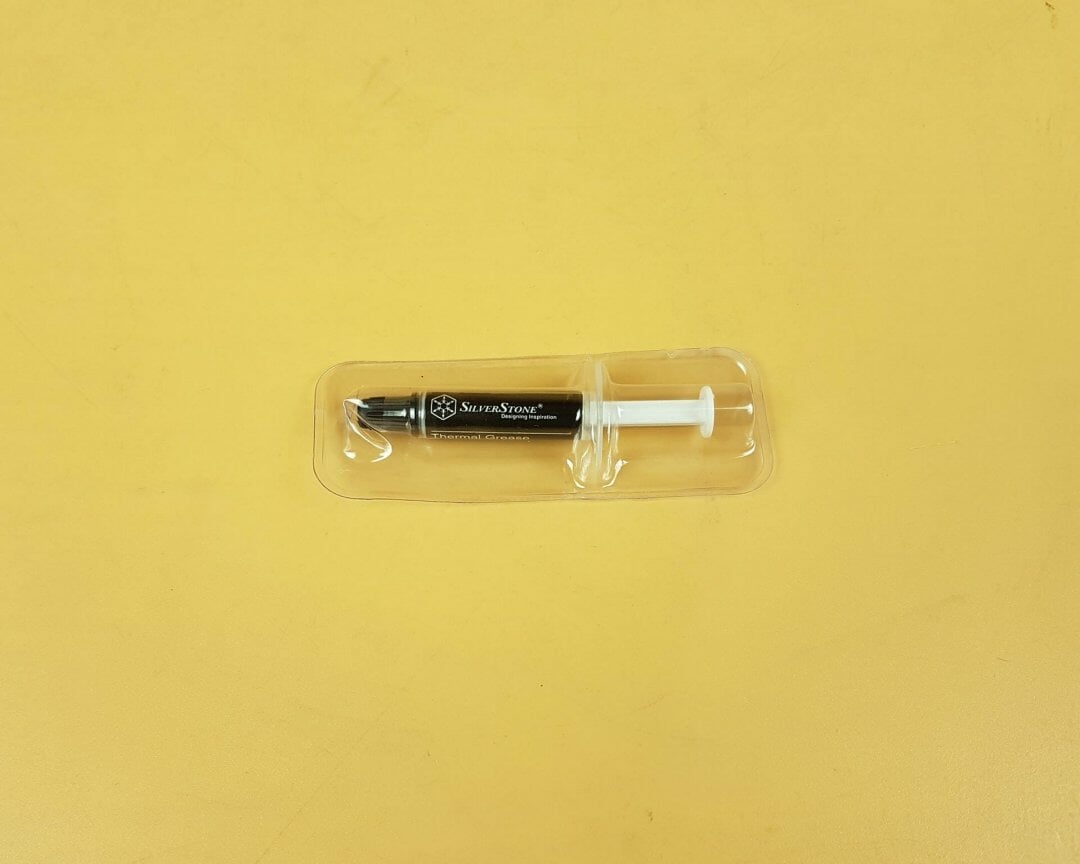 SilverStone has provided a thermal paste as well.

Let’s take a look at the cooler. 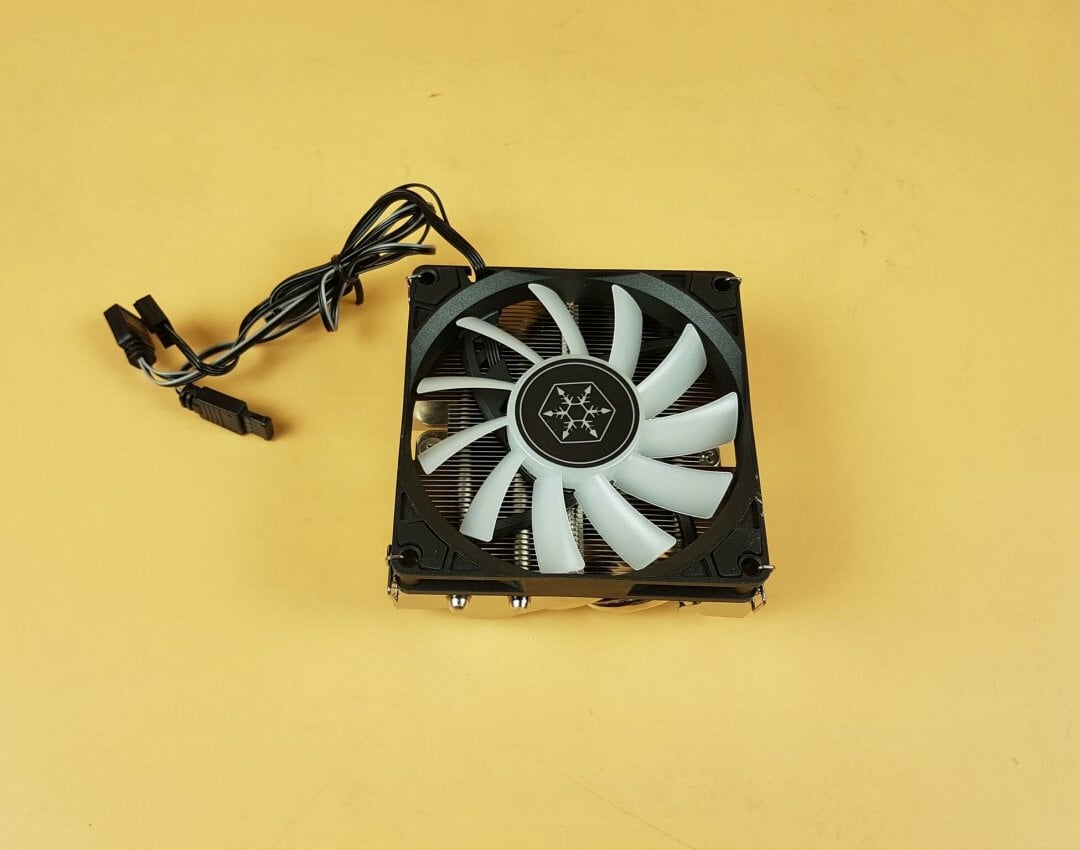 The fan comes pre-installed on the heatsink. You don’t need to remove the fan for the installation which is a plus to the design. The cooler has a dimension of 95x48x95mm. The 48mm is the height of the overall solution. The height of the heatsink is 33mm. When it comes to low-profile coolers, height is the main factor. The 48mm is a good height though we would like to see how this cooler actually performs standing this tall. The cooler has a net weight of 305gm. 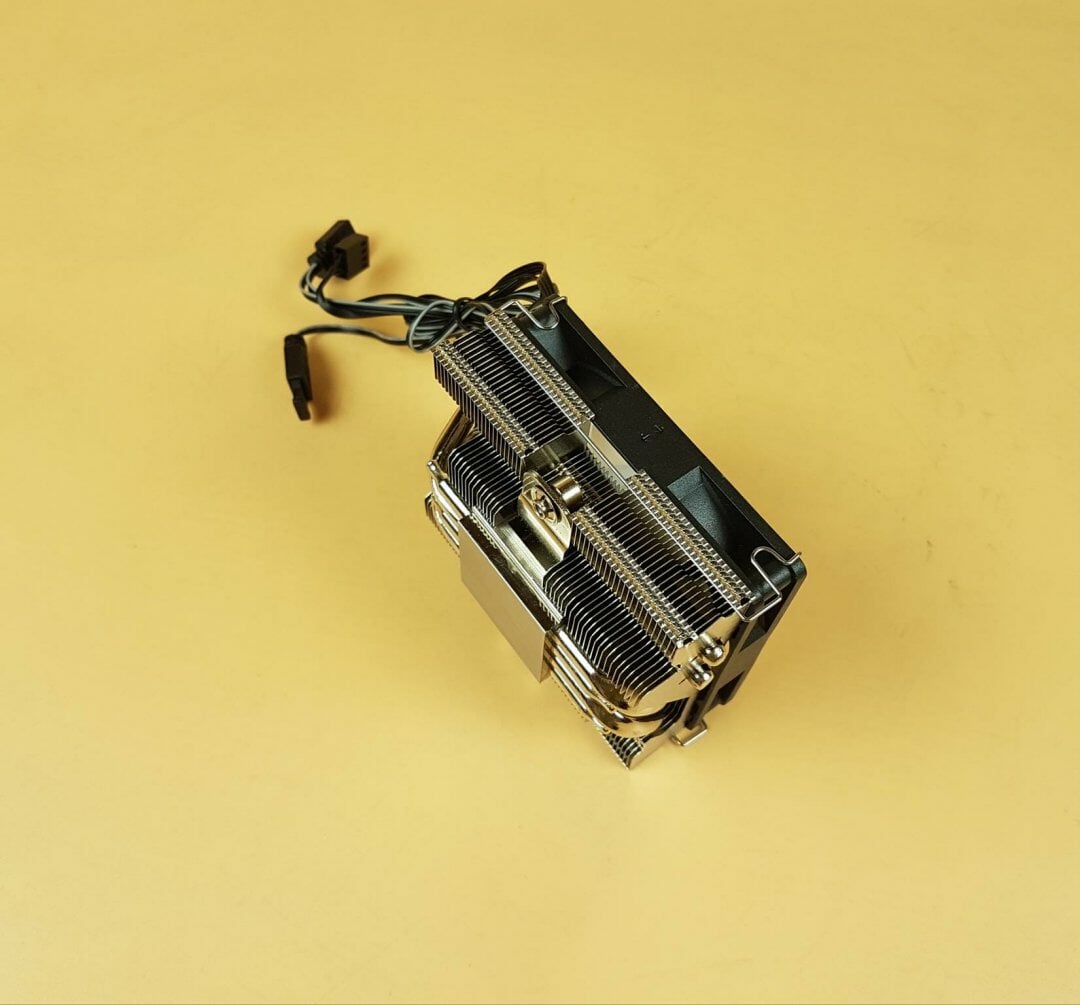 The above picture shows the side of the cooler. There is an inset in the center of the heatsink which gives access to the pre-installed spring-loaded screws. The overall thickness of the heatsink varies from point to point. The outside side has two areas where the fins have joints. The exterior fins are prone to break apart and this side is also a bit sharp so take care when handling. 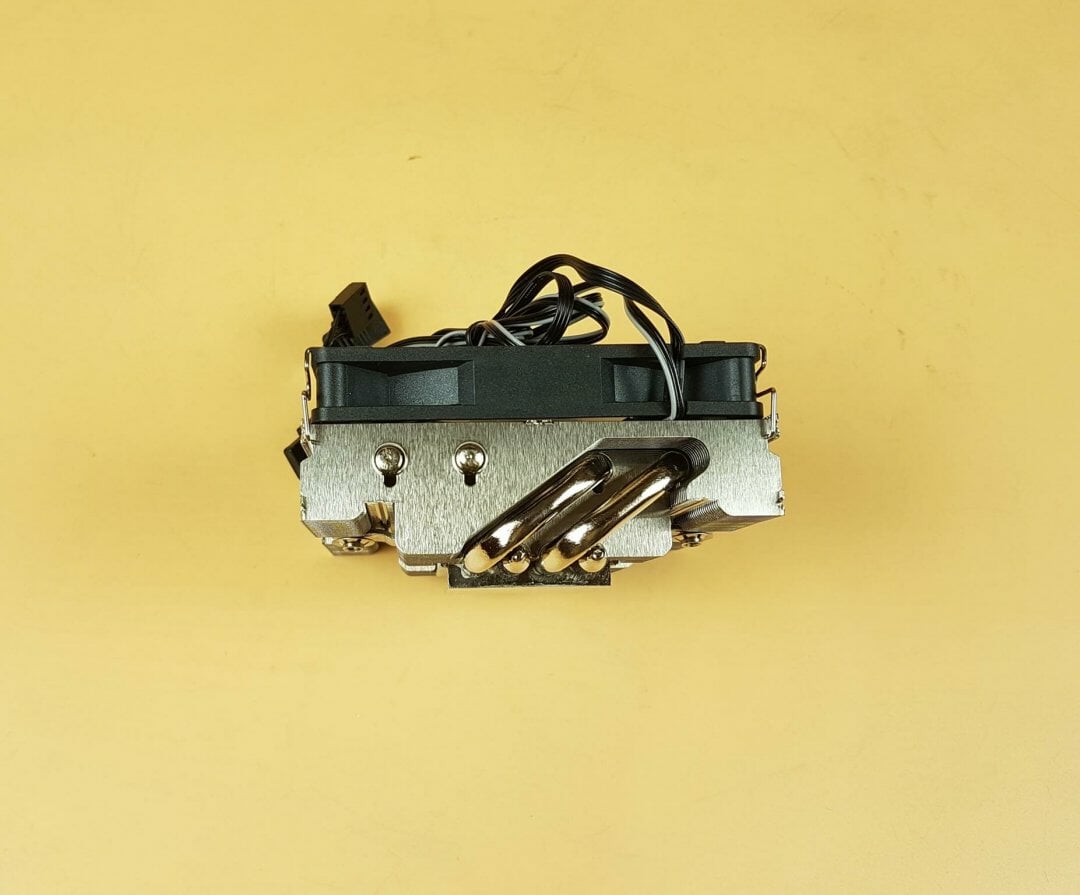 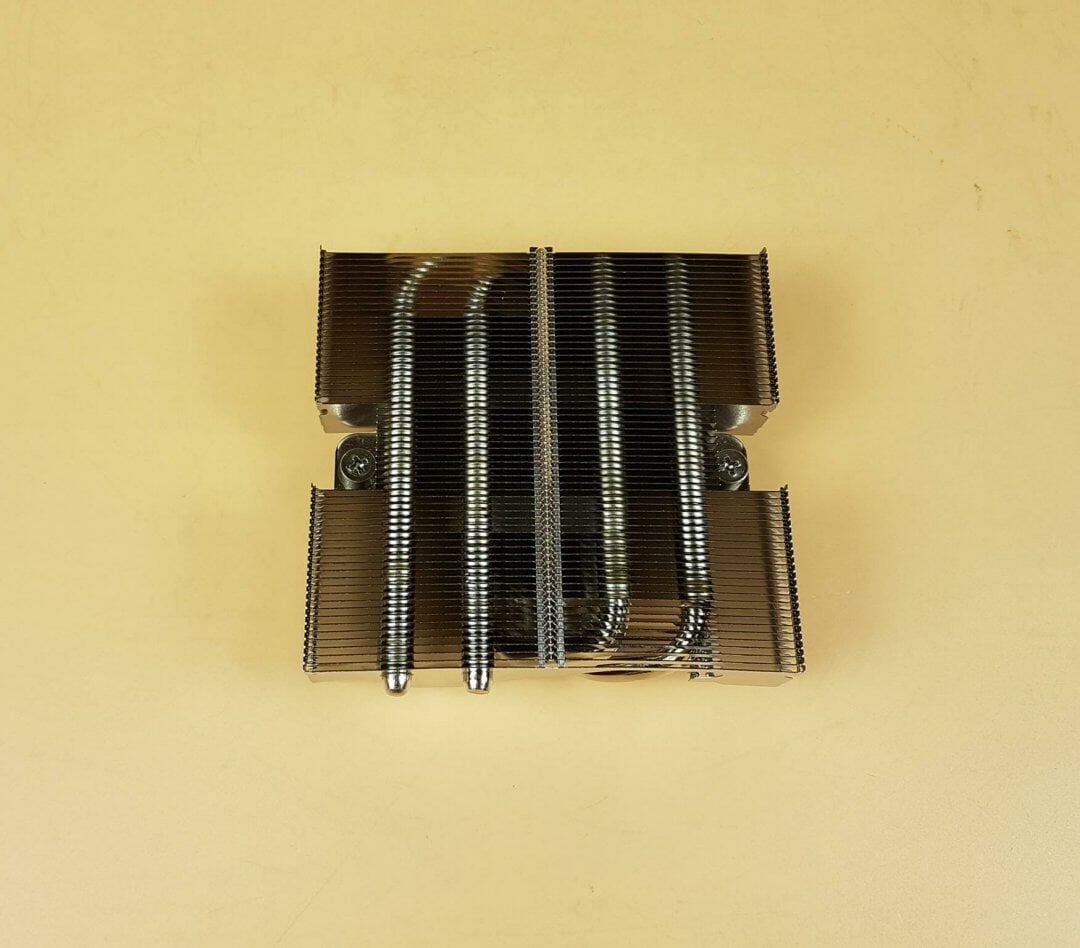 The above picture shows the top view of the heatsink only after removing the fan. We have a dense fin stack comprising 61 fins. The mid-section has cutouts on the exterior side. This section has 12 fins. The section above has 24 fins and the section below has 25 fins. Clearly, with dense fin stack, we would need a high static pressure-rated fan. The assembly is jointed in the center. This joint is somewhat flimsy. 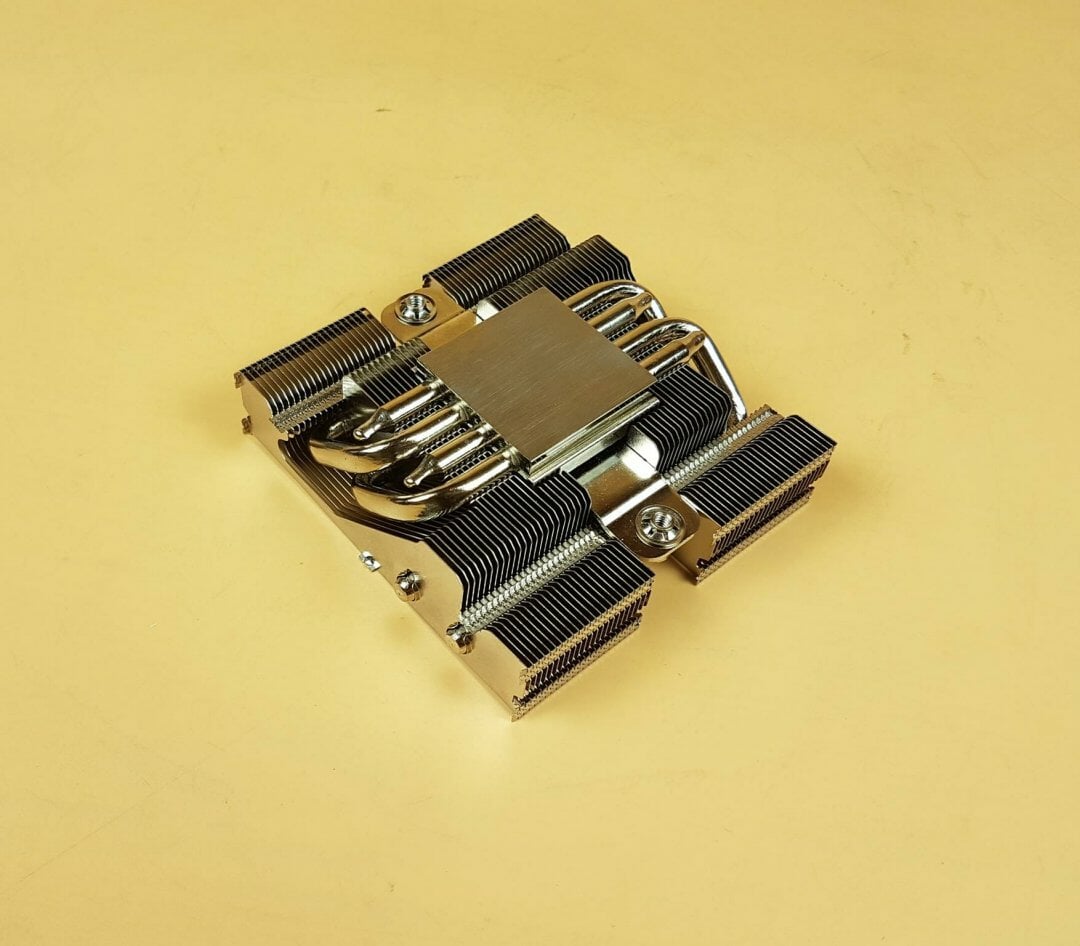 The above picture shows the base of the heatsink. This assembly comprises 4x copper heat pipes which are nickel coated and joined with the aluminum fins.  The area below the heat pipes and the base plate has joints. The base is almost square measuring 35×35.5mm. The base is also nickel coated. The cross-bar is pre-installed on the base. 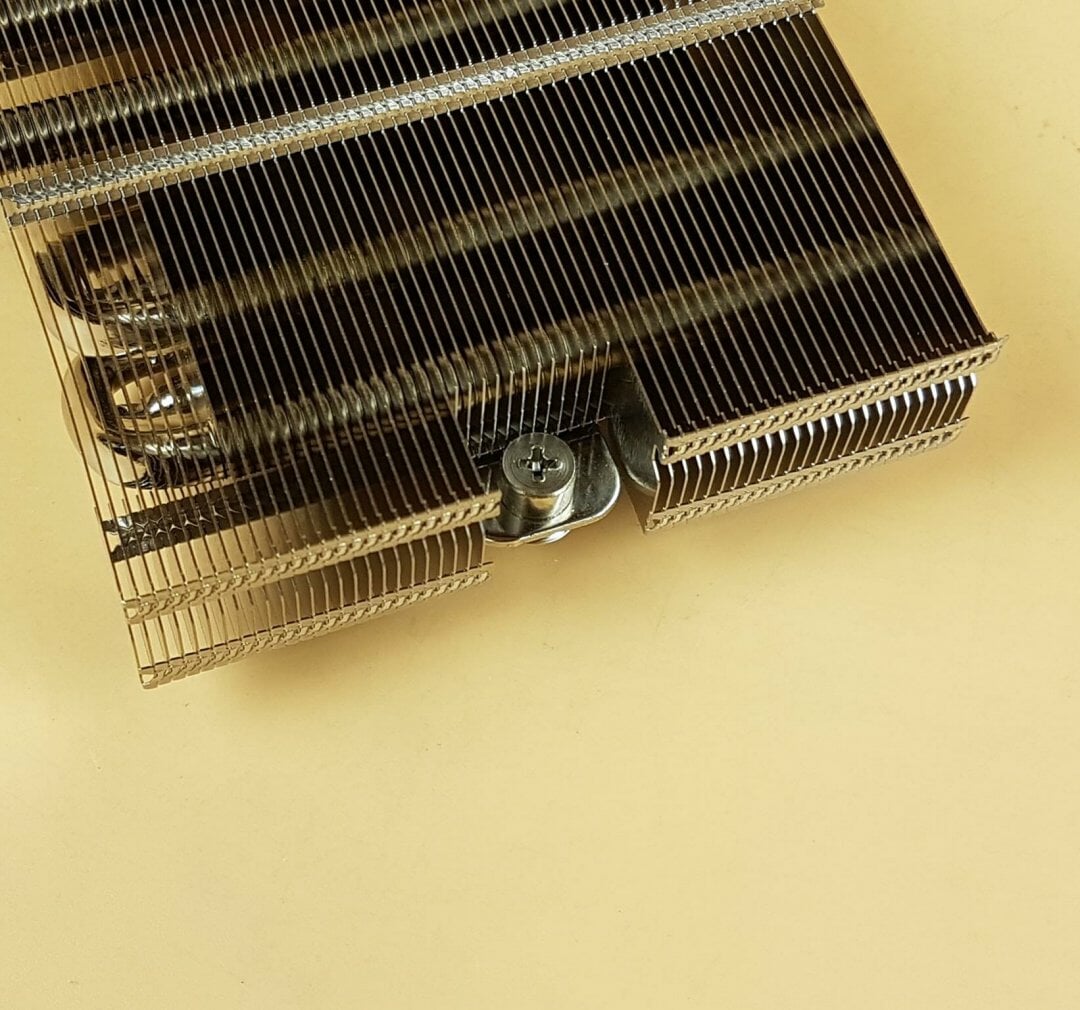 The above picture shows the close-up view of the middle inset where the SilverStone has provided a spring-loaded screw. 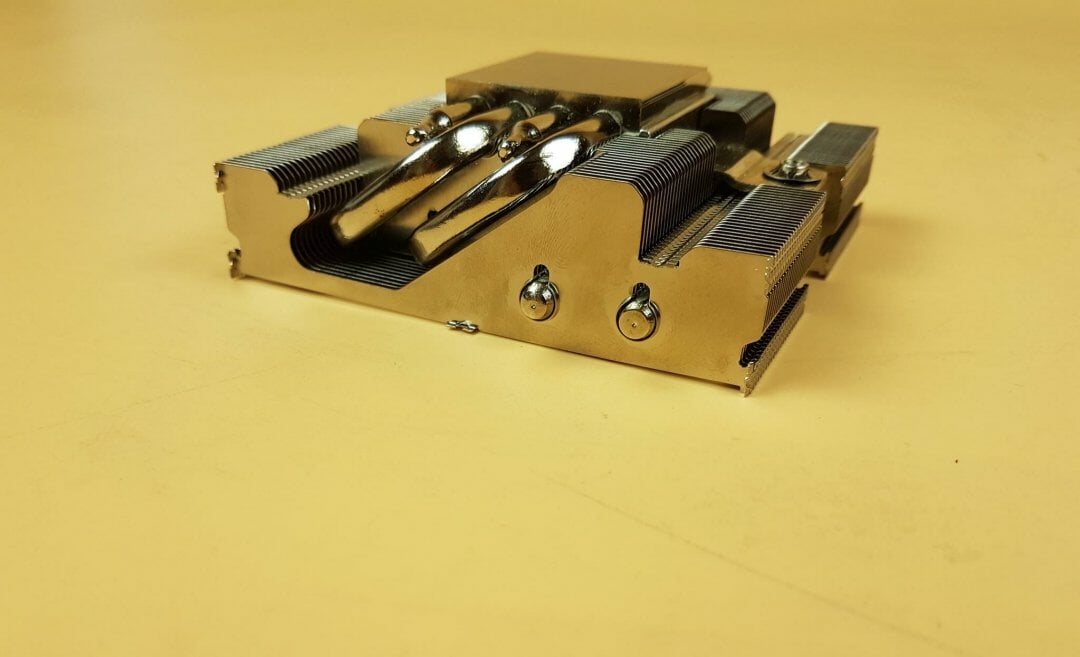 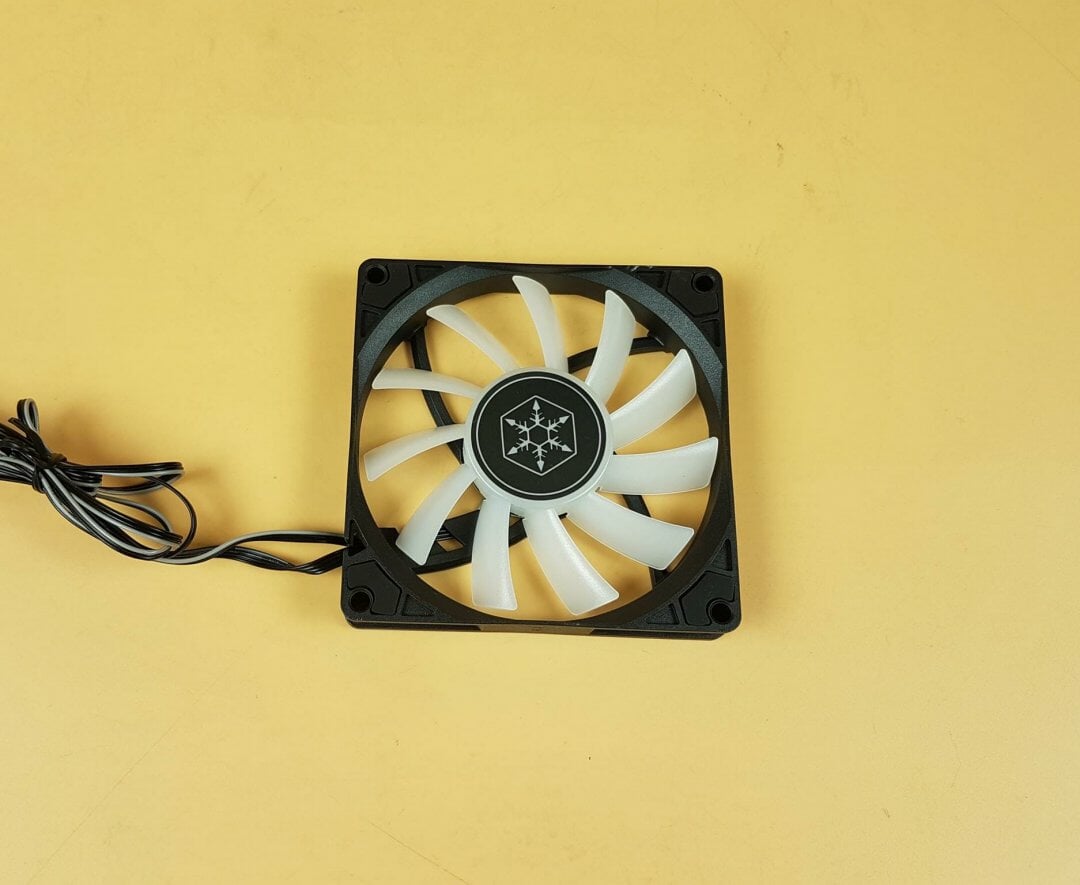 SilverStone has provided a 92x15x92mm size A-RGB fan with the cooler. The fan has a thickness of 15mm. we have 11x translucent blades with a large diameter center. This larger size is due to the fact that the center is housing the A-RGB LEDs. The mounting corners have cut-to-size anti-vibration pads. 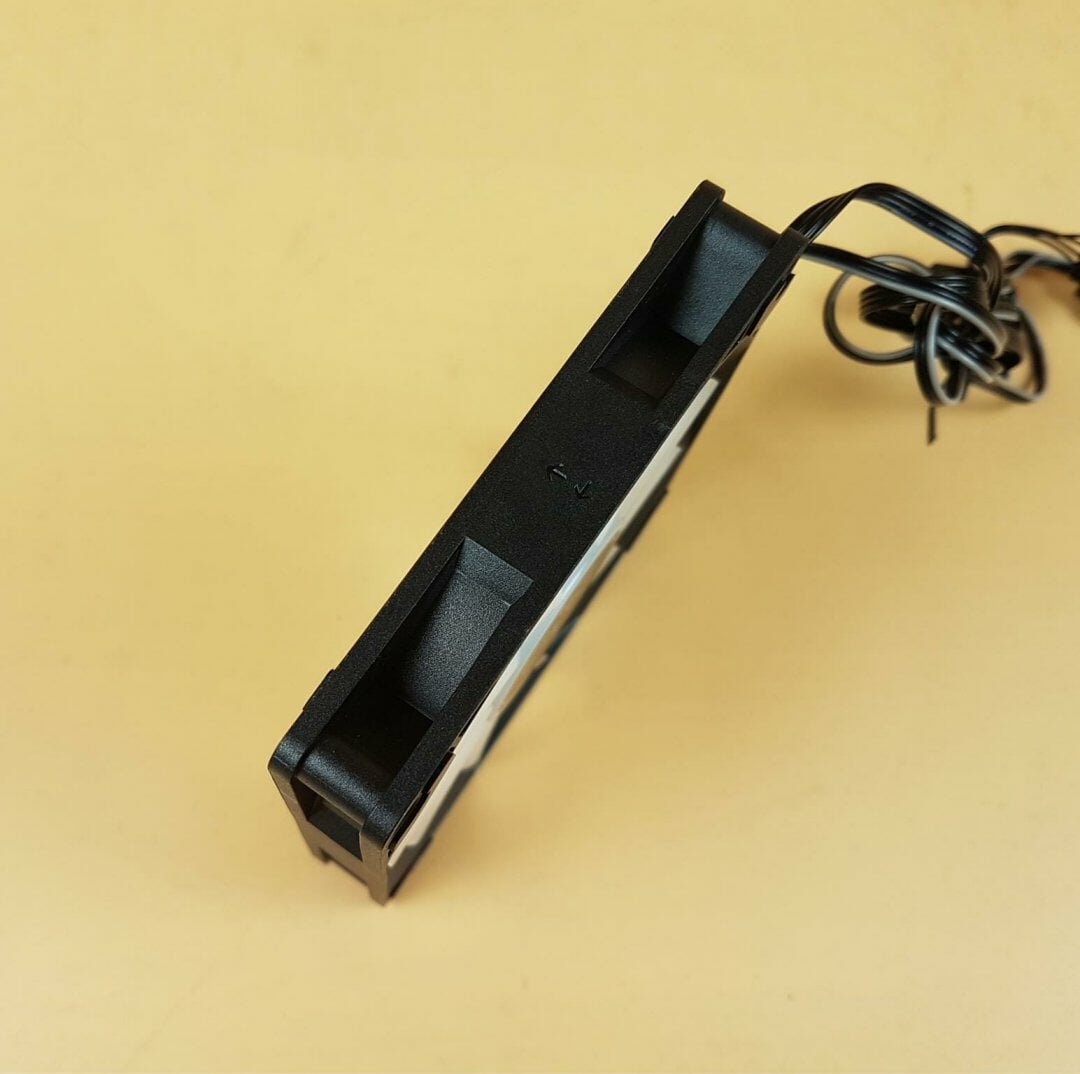 The fan has a black color sturdy frame. There are arrow symbols indicating the direction of the airflow and the direction in which blades would spin. 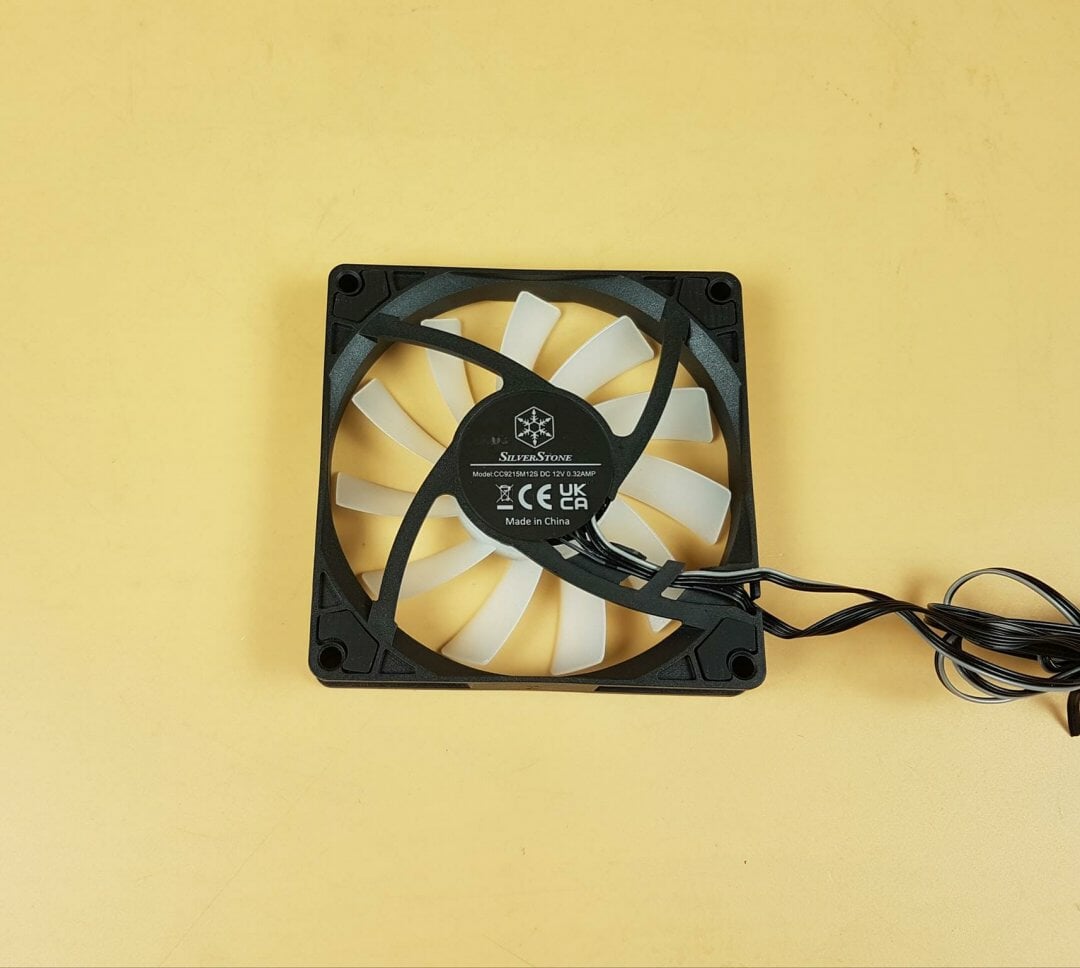 There is a 4-arms assembly on the backside with one arm having catchers to hold the wires. The fan is made in China. This fan is using Hydraulic Bearing. The 0.32A is the instantaneous current for the motor. Once the motor’s operations are stabilized, the fan will draw 0.21A. 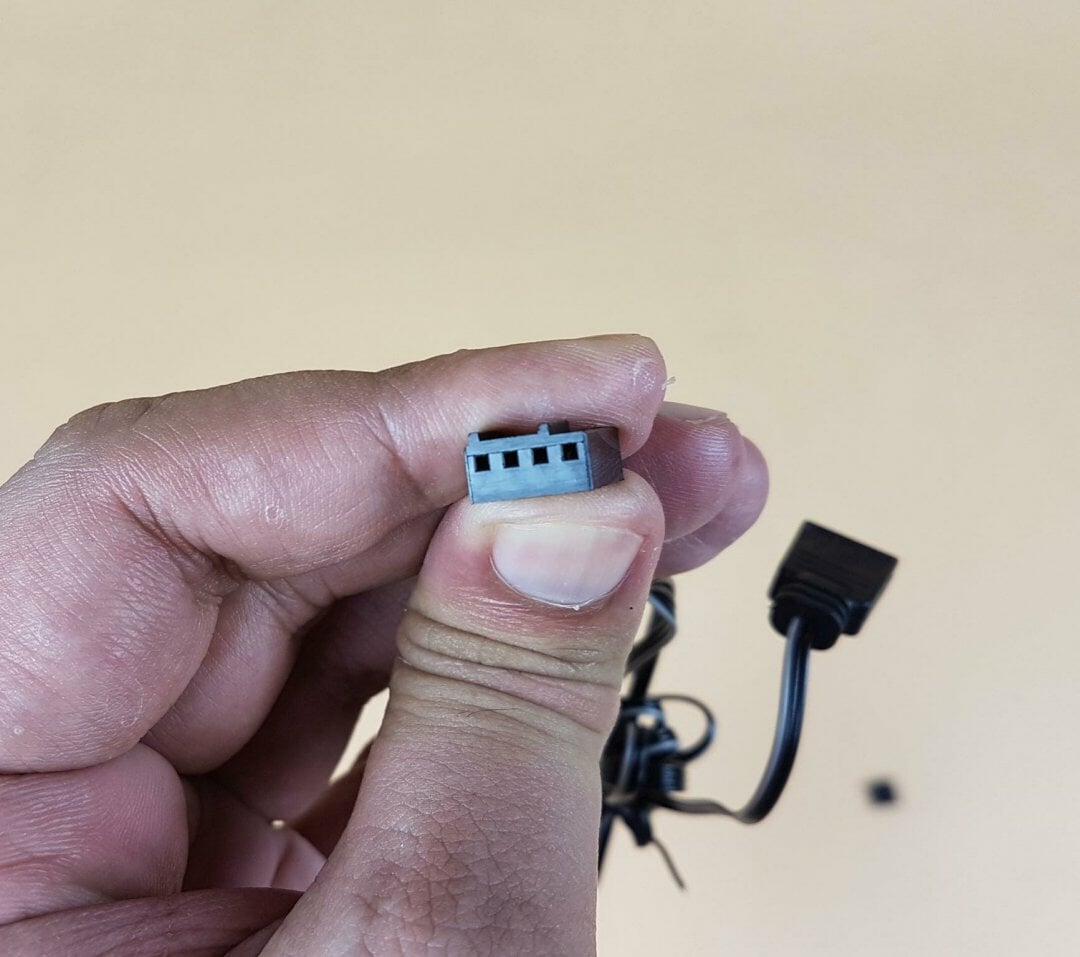 The fan has a 4-pin PWM connector. 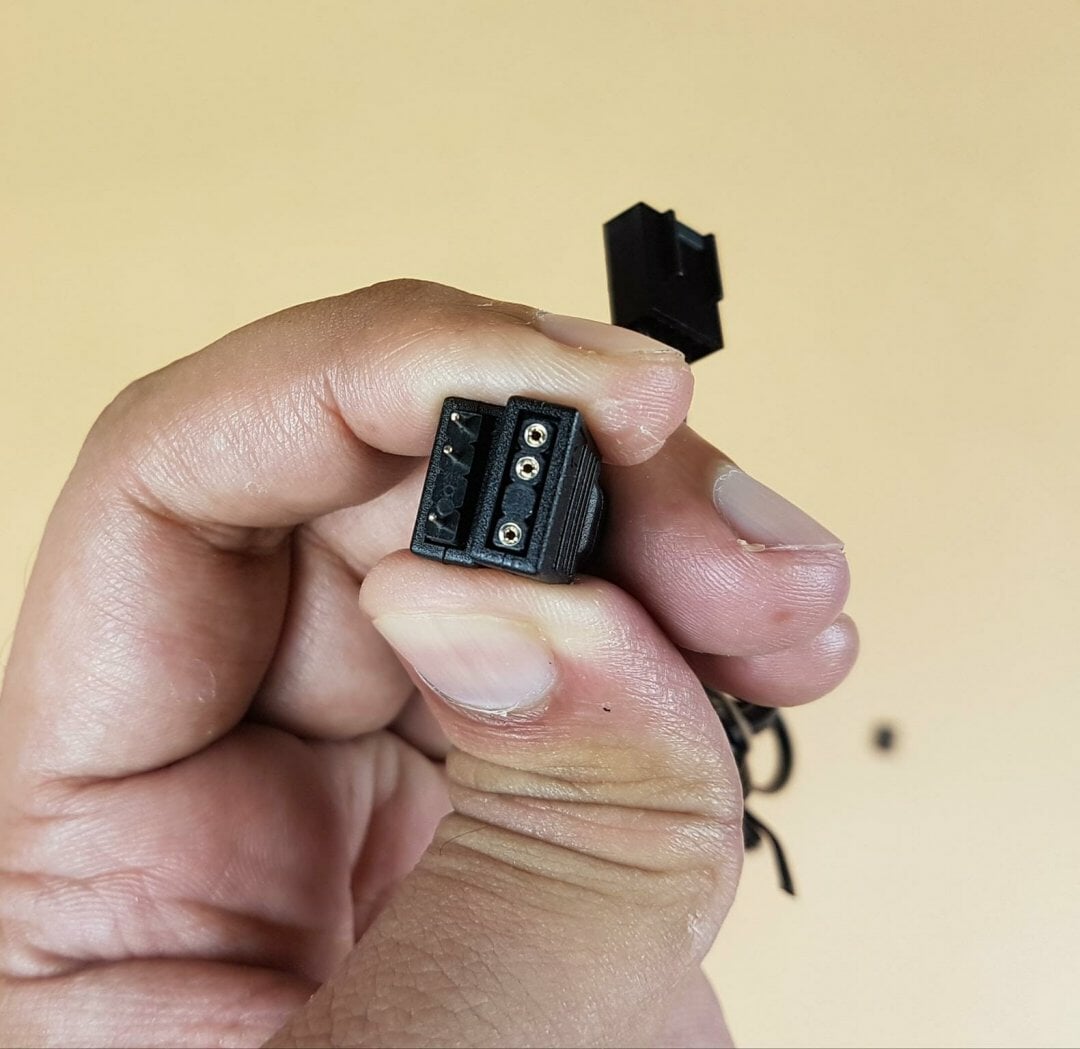 The fan’s specification is as under:

We are no longer showing the step-by-step installation processes. You may refer to the user guide for this purpose. We have tested the cooler on the Intel 1200 socket on the MSI MAG Z490 TOMAHAWK motherboard. Ideally, this cooler should have been tested on the ITX motherboard but we have lost our CPU which we could employ on the ITX motherboard.

We placed the cooler on the Asus Strix B360i motherboard and noted any clearance issues. This cooler standing at 95x48x95mm has no clearance issue as such though it sits closer to the DIMM slot but does not obstruct it.

We connected the A-RGB cable to the MSI MAG Z490 TOMAHAWK digital light header and control the lighting using the Mystic Sync app. The fan was responding flawlessly to the changes in the app. Here are a few pictures:

The following configuration is used: –

We are using Noctua NT-H1 thermal paste for coolers testing. Using the same thermal paste for all coolers would ensure standardization. The testing is done on an open-air bench system. Once inside the chassis, the temperatures are expected to rise and would largely depend upon the optimal airflow inside the chassis. Not every run of the stress test may yield the same result. This could well be due to many factors like mounting pressure, thermal paste application and varying ambient temperature. Not to mention the silicon differences even among the same category of chips. Hence, it is pertinent to mention the testing methodology along with the specifics.

We have recently tested the Noctua NH-L9x65 cooler and have included that cooler in the comparison.

The SilverStone Hydrogon H90 is behind the Noctua cooler with a margin of 2°C. Please keep in mind that the coolers were tested with AVX load. These coolers could not do the job with the cores clocked at 4.6GHz. Even at 4.5GHz, the maximum temperature was 92°C on any core. This shows that the cooler can handle the gaming load effectively however, it is not suitable for heavy workloads involving AVX loads.

The fan at 2600 RPM makes quite some noise so better use Auto PWM mode or set a custom fan curve.

The SilverStone Hydrogon H90 A-RGB is a new low-profile category cooler aimed at the mini-ITX / SFF builds where the space constraint requires a small footprint but adequate cooling. This cooler stands at 48mm tall hence suitable for these builds. The cooler is compatible with the Intel LGA115x/1200/1700/20xx and AMD AM4 sockets.

The cooler has a dimension of 95x48x95mm including the fan. The net weight is 305 gm. The included fan has a dimension of 92x15x92mm where 15mm is the thickness or the height of the fan. SilverStone has managed to provide stunning and vivid A-RGB lighting on the fan despite its small footprint. This augmentation lifts the overall value of the cooler though that is subjective.

The heatsink comprises 61 aluminum fins and 4x nickel-plated, copper heat pipes with each having a thickness of 6mm. This gives the heatsink quite some heat transfer capability. We would need a high static pressure fan for this dense fin stack and SilverStone has covered that ground as well. The fan has a static pressure rating of 2.29mmH₂O and an airflow rating of 45.73CFM but for that, they have upped the speed to a maximum of 2600 RPM with a sound level of up to 34.6 dBA. The fan is using Hydraulic bearing having an MTTF of 30,000 hours.

The build quality is fine. The exterior fins of the heatsink seem prone to breaking apart so handle with care. The installation is a straightforward process but it requires the motherboard to be placed horizontally. I personally, don’t like pasting any mounting hardware like a back plate or washers on the motherboard. The Intel backplates are to be pasted on the motherboard. SilverStone has provided a separate backplate for the Intel LGA1700 socket. It uses the stock AMD backplate.

The cooler is rated for USD 60.00 at the time of the review. This is USD 10 above the Noctua NH-L9x65 cooler. The A-RGB fan covers up for that. Please keep in mind that the NH-L9x65 has a height of 65mm with 51mm height of the heatsink. The SilverStone H90 A-RGB stands at 48mm tall with 33mm for the heatsink only.  The SilverStone cooler has put up a good fight with the Noctua cooler on our Intel i7 10700k clocked at 4.5GHz all cores under AVX load. SilverStone is providing one year warranty for this cooler. This cooler can handle the gaming load effectively.

We are grateful to SilverStone for the provision of the test unit. 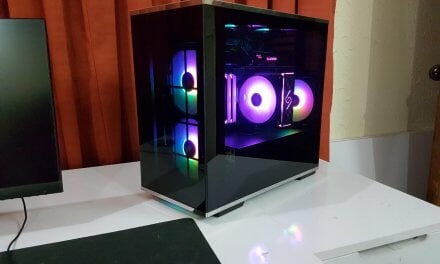 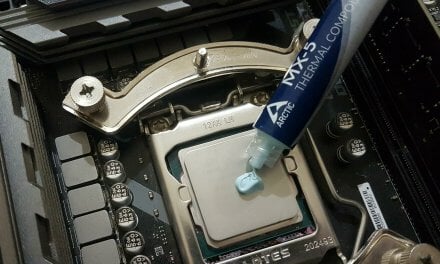 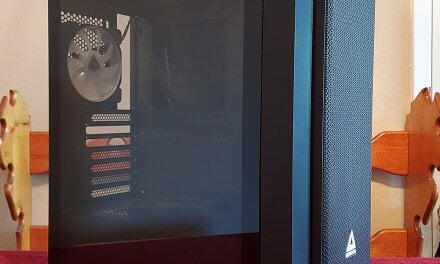 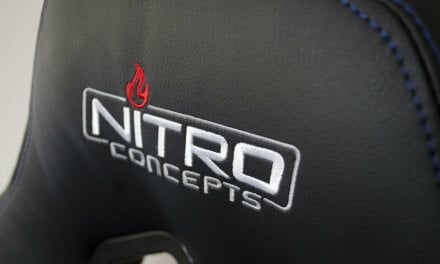