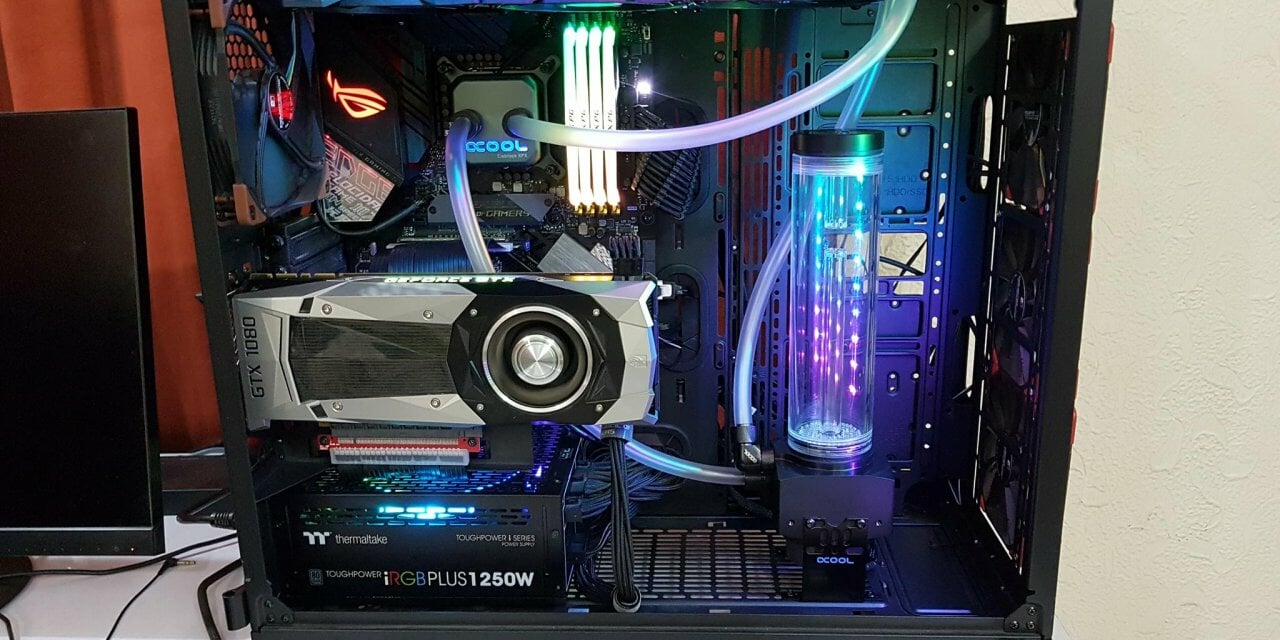 Today, I will be taking a look at their cables PP10 and RC04 from PSU Accessories and System Cables sections. The PP10 is a dual power supply adapter cable that allows the user to connect two PSUs with a single system. It is ideal for miners, gamers with multi-graphics cards setup or any other setup which needs a dual power supply. The RC04 is a 400mm riser cable for the graphics card. It is using PCIe 3.0 X16 interface. It features high performing EMI shielding with flexible ribbon design. 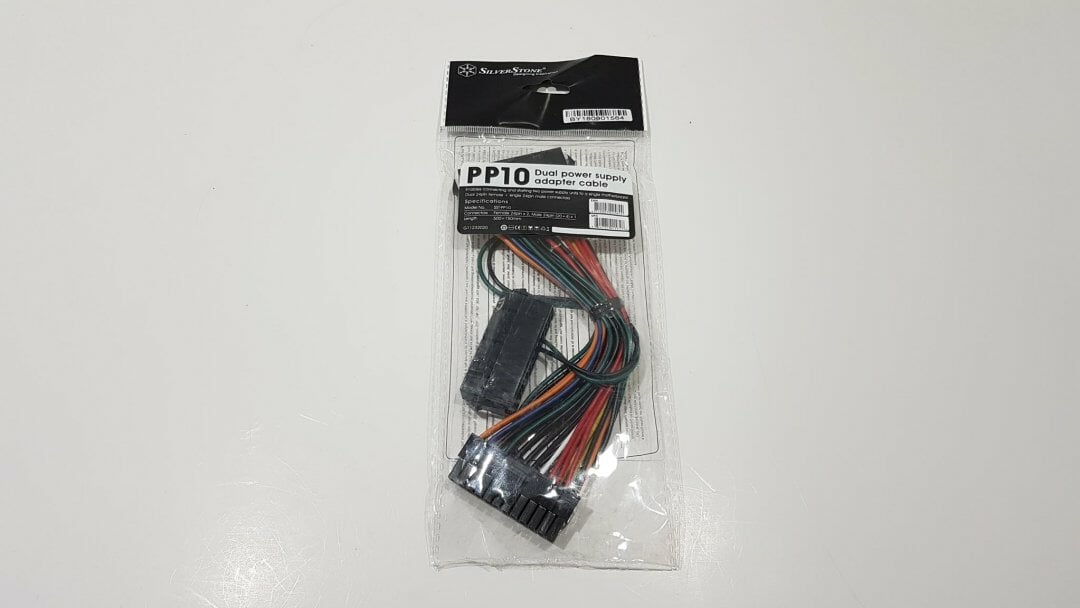 The SilverStone PP10 comes in a bare minimum packaging. The cable is shipped inside a transparent container which can be tear down to take the cable out. There is a sticker pasted on the front side with PP10 printed in the bold format on the top. Specifications of the cable are printed on the main section followed by the EAN and UPC labels. 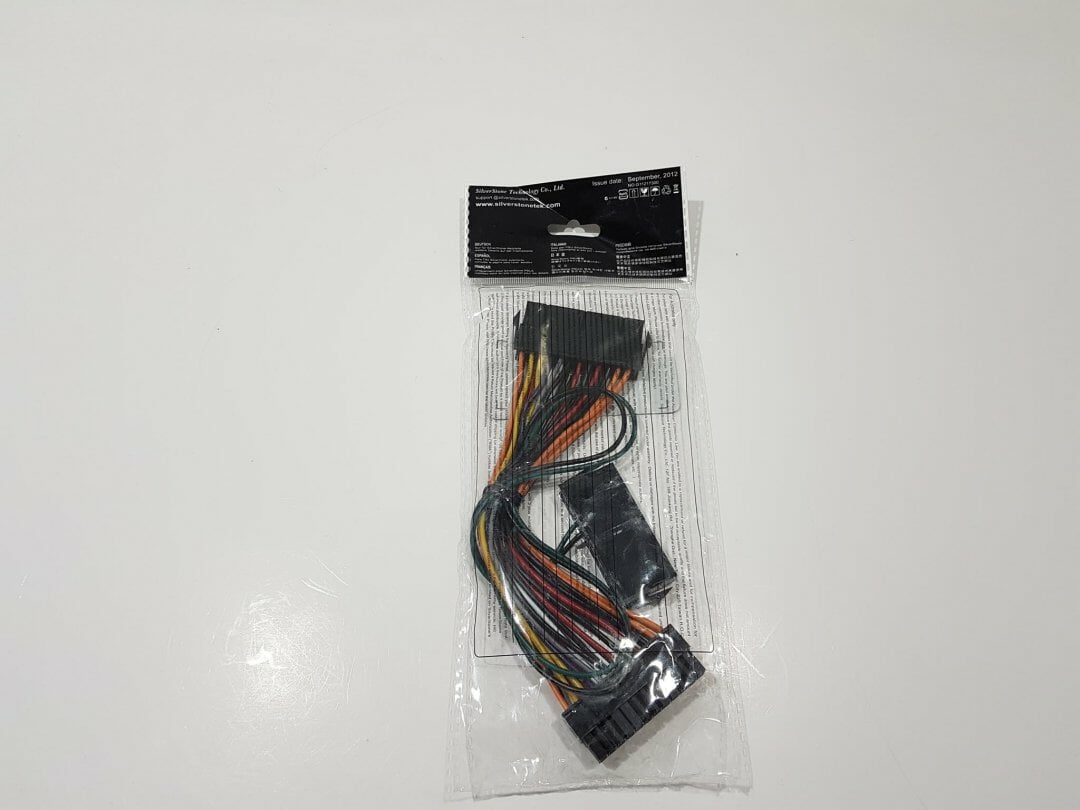 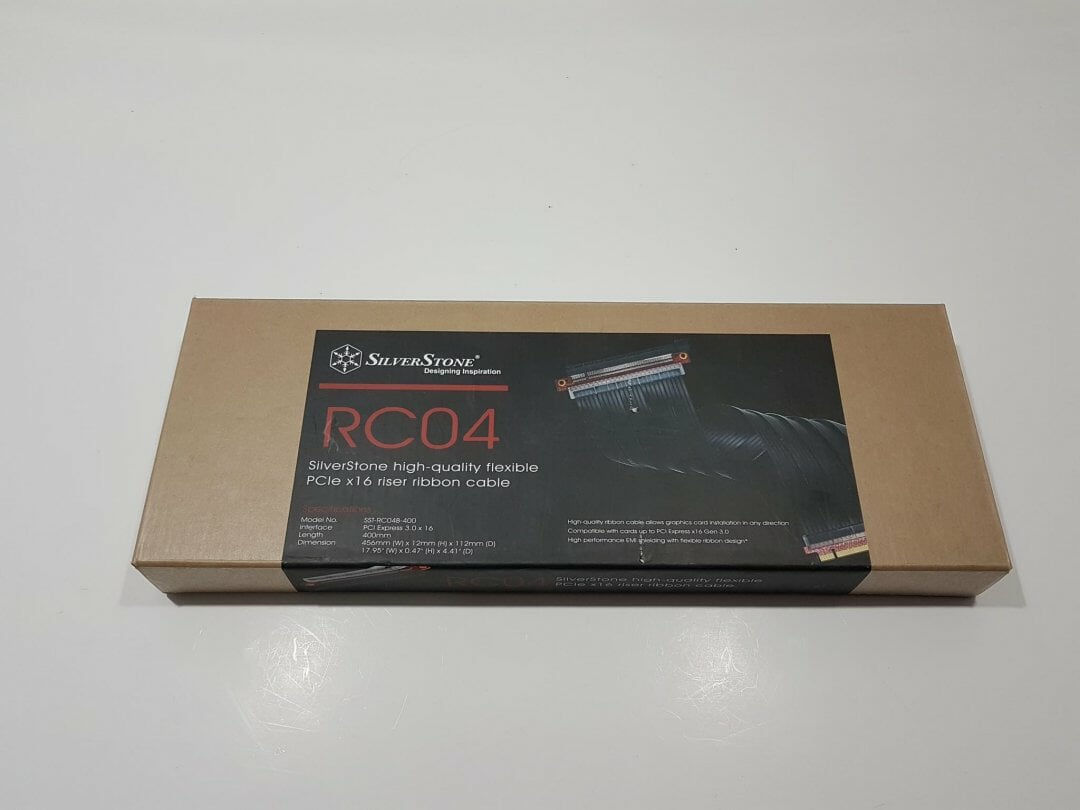 The RC04 is shipped inside a cardboard box of brown color. There is a single sticker pasted on the front side which extends to the backside. SilverStone brand name and logo are printed on the top. RC04 is printed in the red color font. The picture of the cable with one bend on it is printed on the right side. The specifications are printed at the bottom. 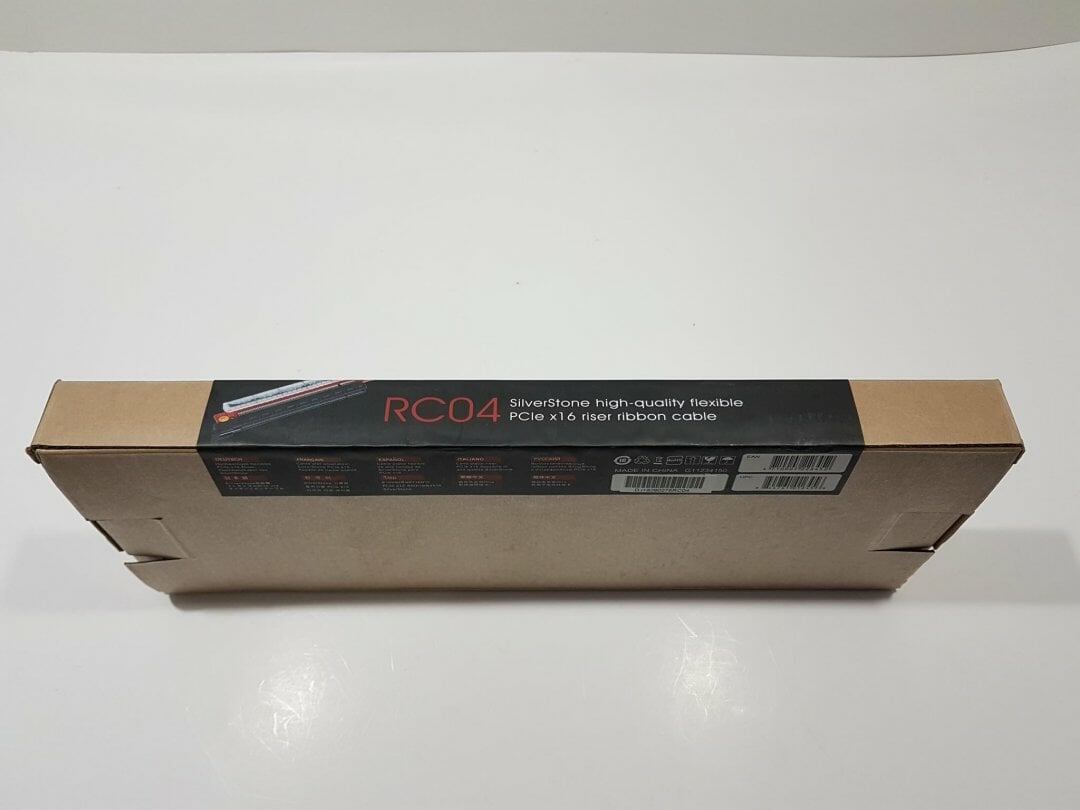 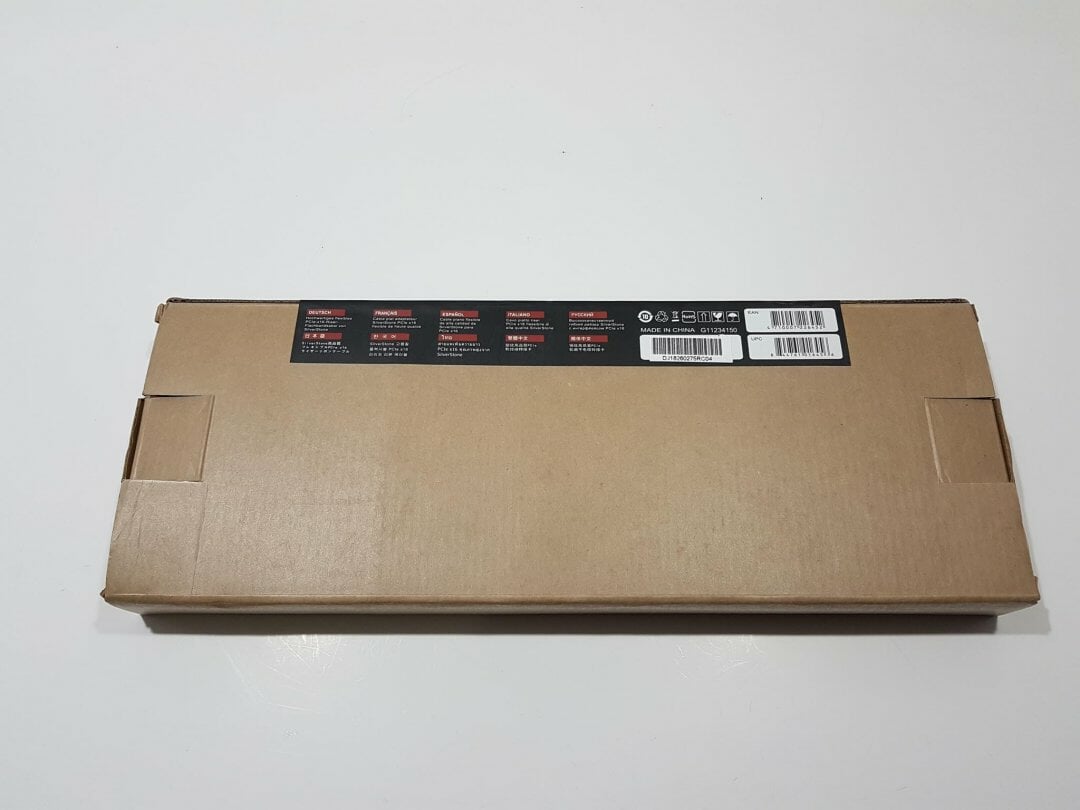 The RC04 cable is placed inside an anti-static container. There is nothing else in the box.

I will be discussing both cables one by one starting with the PP10. The PP10 is a Dual PSU adapter cable. The idea here is simple. This cable allows you to connect two PSUs to a single system. The first question boggling your mind would be why and for what purpose. Let me answer it. This cable has multiple use case scenarios. If you are a miner and would want to add another PSU into an existing system then this is the cable for you. You could use an ATX plug on the second PSU as well but it may not start both PSUs at a time which this cable does. Another case would be if you have multiple graphics cards and your motherboard and CPU are also very power hungry and you kinda feel like that a single power solution is simply not enough then this cable is what you need as well. 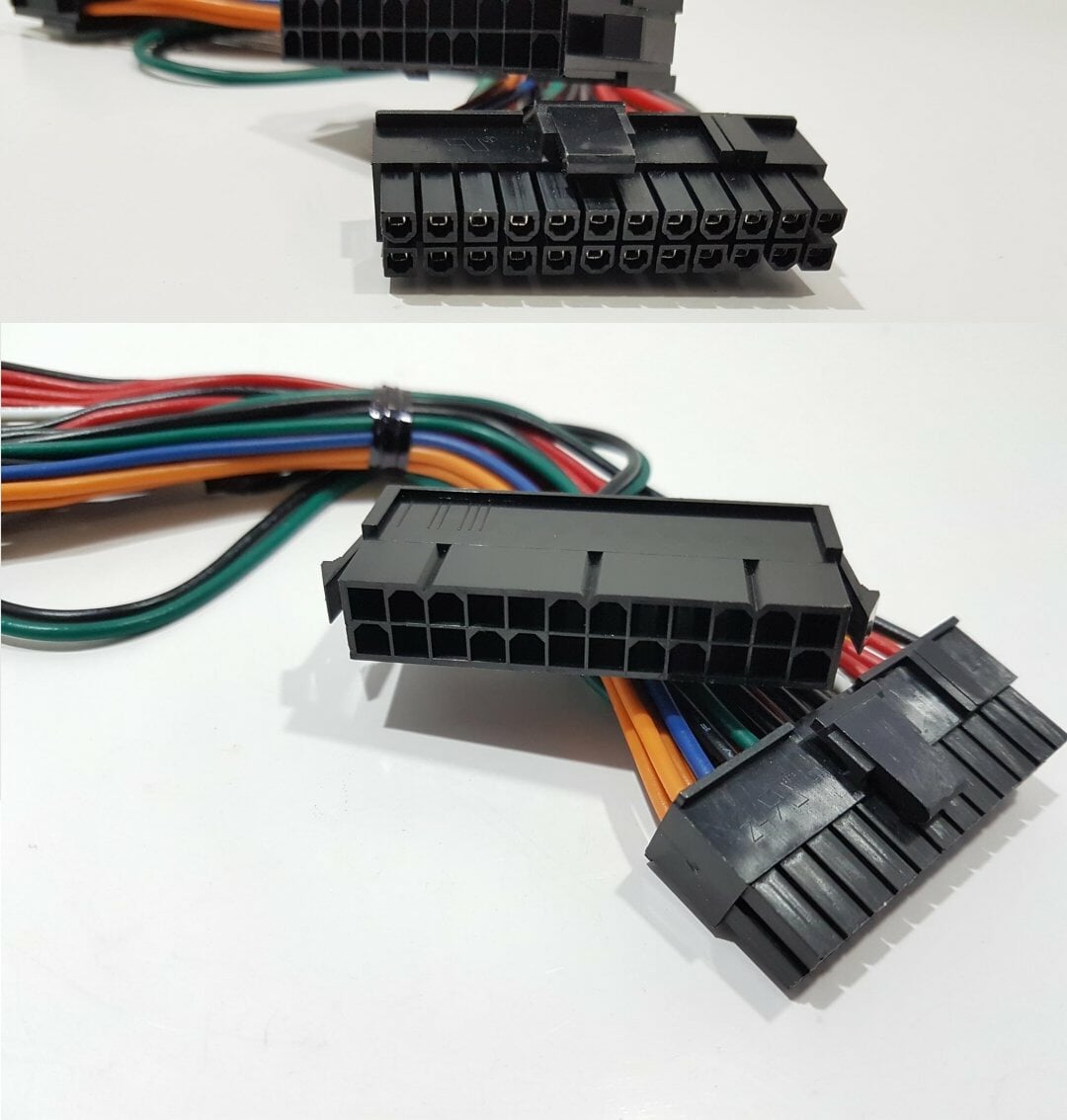 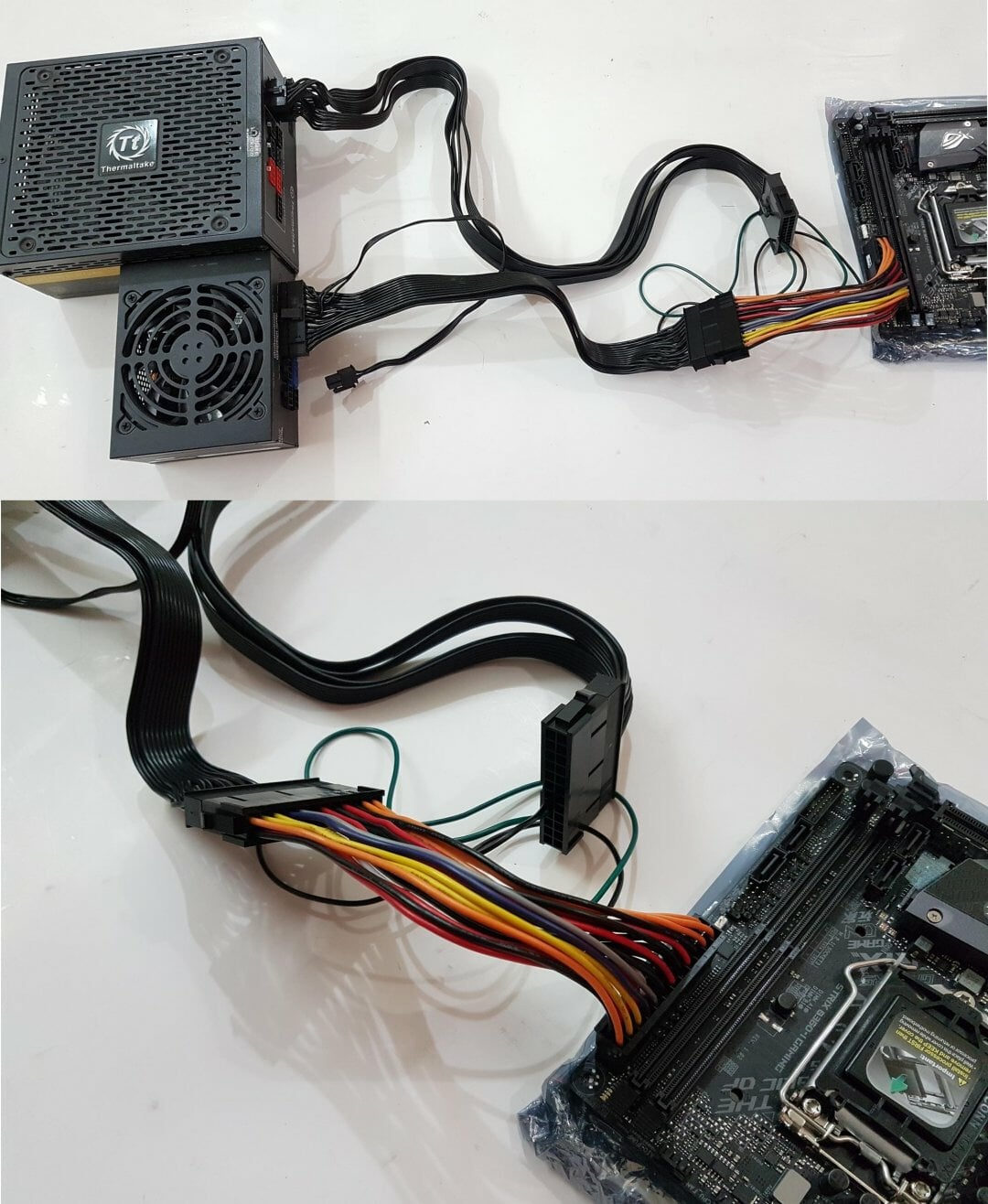 I am using the above picture to illustrate the very concept and working idea behind the PP10. As can be seen, the male connector is connected to the Asus Strix B350-I Gaming motherboard and the other two ends (female) of the PP10 are connected to the Thermaltake TP RGB 750W PSU and SilverStone SX500-G PSU. To test the cable, I have used the following configuration:

As can be seen in the picture, I have connected both PSUs to the PP10 which is then connected to a single motherboard. Turning one PSU on will turn on the other PSU. I did not see any hiccup during the testing though I would strongly suggest using one PSU for motherboard 24 ATX and EPS connectors and the other for the graphics card(s) to avoid voltage offset.

Now, it is time to take a look at the RC04 riser ribbon cable from the SilverStone. With the advent of vertical mount for the graphics card, this idea has gone viral quickly and we are seeing multiple of beautiful builds boasting the vertically mounted graphics cards in them. The question is if the graphics card is not connected directly to the motherboard then what is the mechanism to do that? To put simply, one would need a PCIe cable to bridge the distance between the graphics card and the motherboard. We call this cable as riser cable or some refer to it as GPU rise cable. The RC04 is a riser ribbon cable which does exactly what I have mentioned above. The quality and power the riser cable matters and one should not compromise on these aspects. I have seen quite a few people coming and complaining that their riser cables have failed and turned out they all almost were using cheap, poorly designed cables. 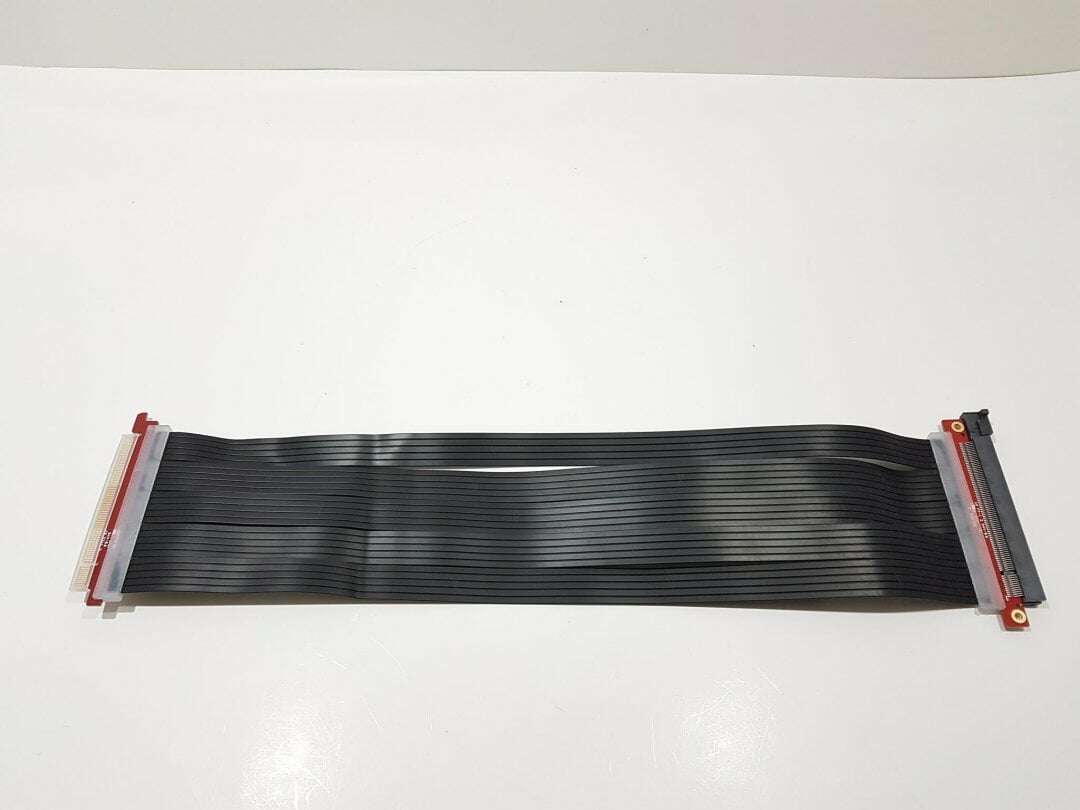 The SilverStone also manufacture the riser cable and I was thrilled to test one to see how it goes. They were kind enough to hook me up with their premium RC04 cable solution in this category. The cable indeed feels premium when holding in hands and operating. The cable has a length of 400mm. Mind you 400mm is quite an excessive length so make sure to work out your length requirement of the cable. I have used this cable in the Thermaltake View 71 TG PC Chassis and still the length was too much for me to handle. But thankfully, it is a flexible design with a provision of up to 5 bends, I was able to set it up rather nicely. The dimension of the cable is 456mm (L) X  12mm (H) X 112mm (D). The cable is using PCIe 3.0 X16 interface so you are covered there as well.

Here is what SilverStone is saying about these cables, “RC04 is a high-quality PCIe x 16 flexible riser ribbon cable developed primarily for the PIO chassis by SilverStone. This cable will enable the PIO based chassis to also be compatible with Mini-ITX builds that require the installation of PCI Express expansion or graphics cards. In addition, it can be used for any other chassis or applications in which an extension is required for PCI Express cards.”

The above picture shows the PCIe connector of the RC04. It is connected to the PCIe slot of the motherboard. 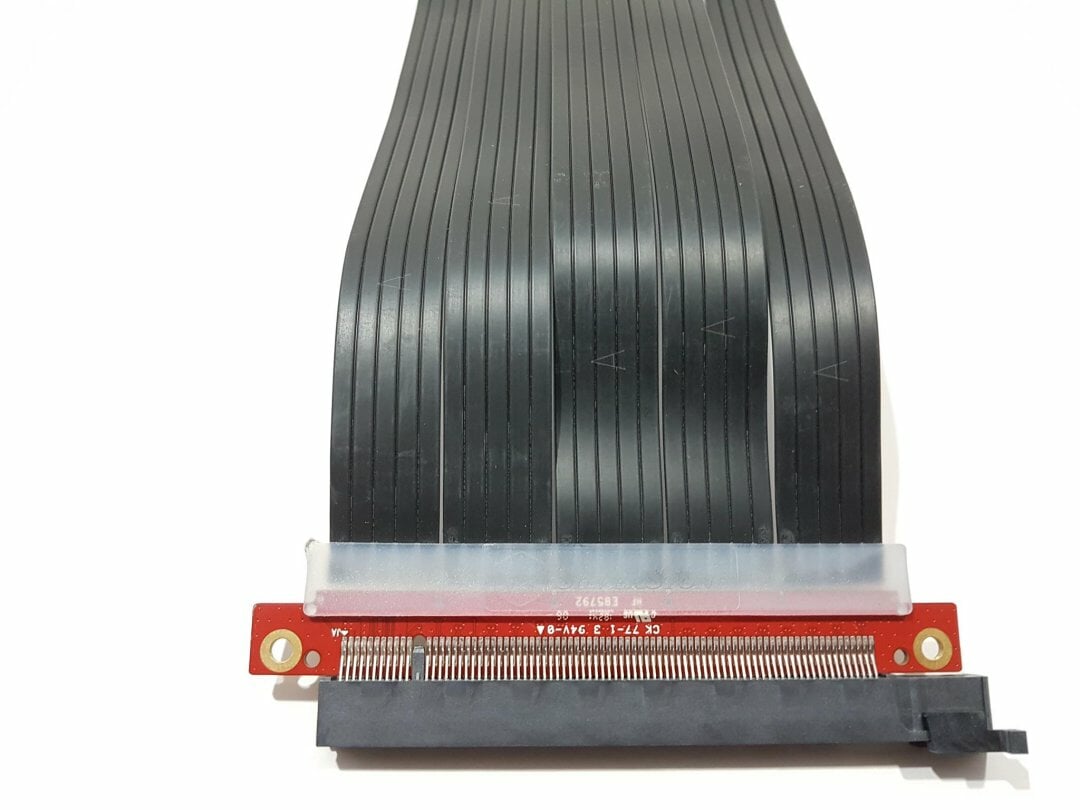 The above picture shows a closer look on the cable itself. The cable is EMI shielded to deliver the smooth and interruption free connectivity between the motherboard and the graphics card. We have a total of 5 sections with each having 5 groups of wires. The above picture shows the length of the cable once installed inside the Thermaltake View 71 TG chassis. 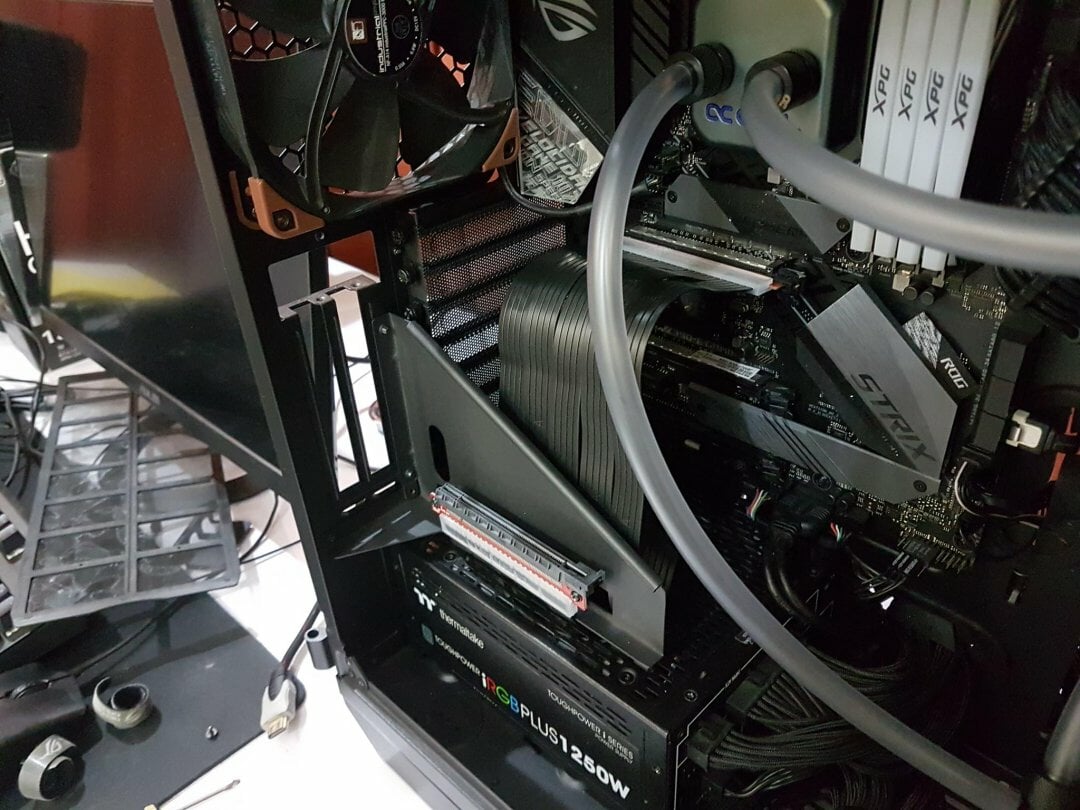 The above picture shows the cable installed on the GPU bracket of the chassis. There was a total of two bends to make it sit inside the chassis in this configuration. 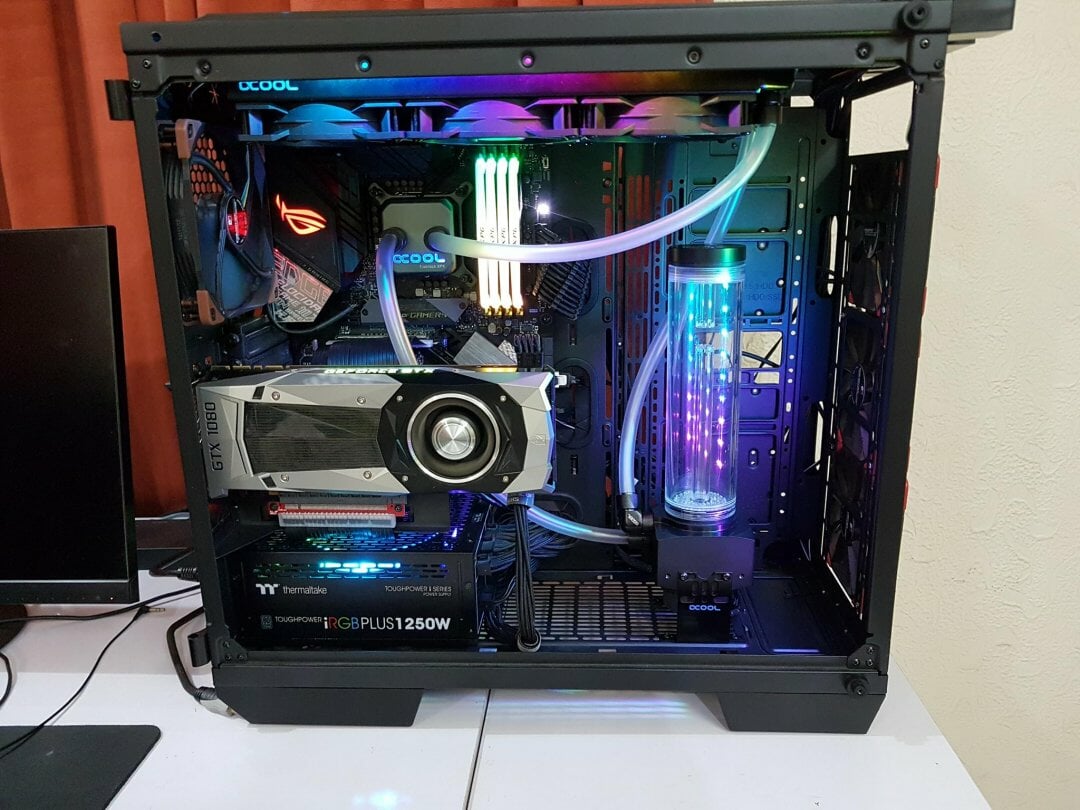 The above picture shows the complete assembled PC including the SST-RC04 to enable the vertical installation of the Nvidia GeForce GTX 1080 FE.

Following test configuration was used to test the RC04:

I will keep it simple as the majority of the users/gamers will be interested in gaming performance for which our key performance indicator is FPS. The Microsoft Windows 10 x64 build 1809 has been used for the testing. The Nvidia graphics drivers 417.35 has been used. Following games were tested: 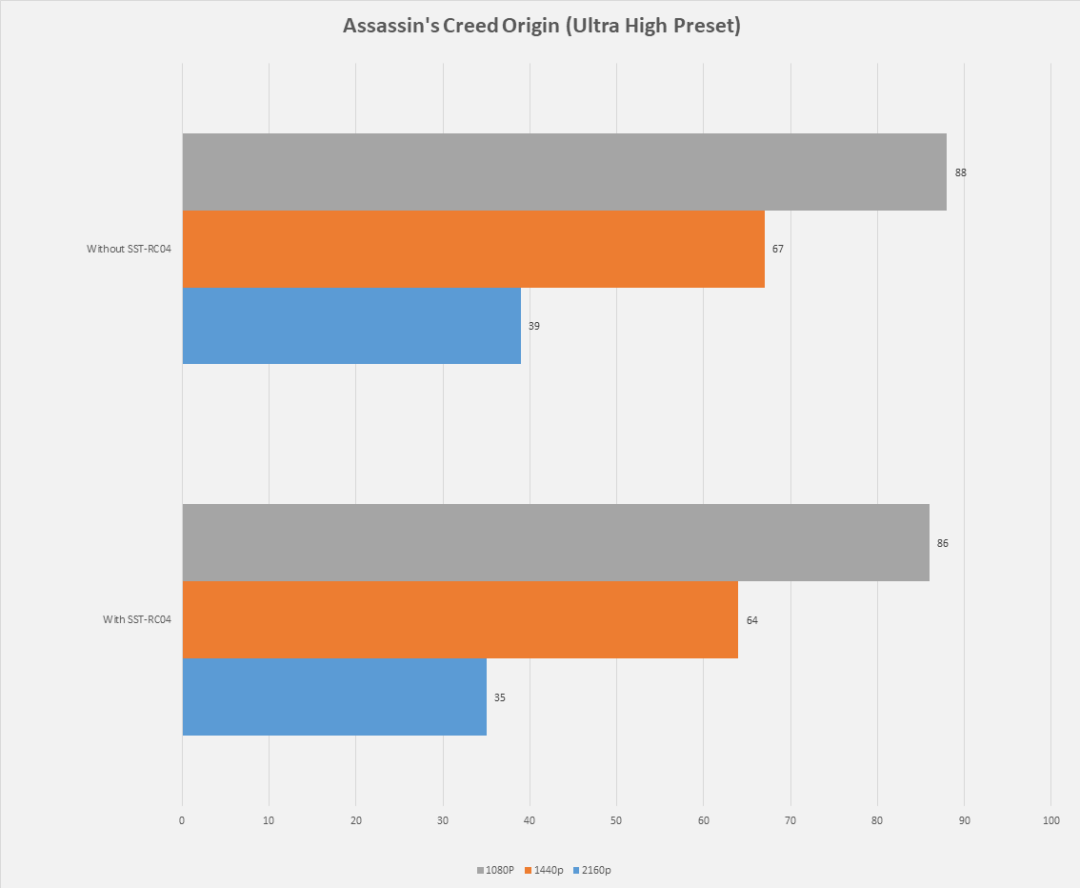 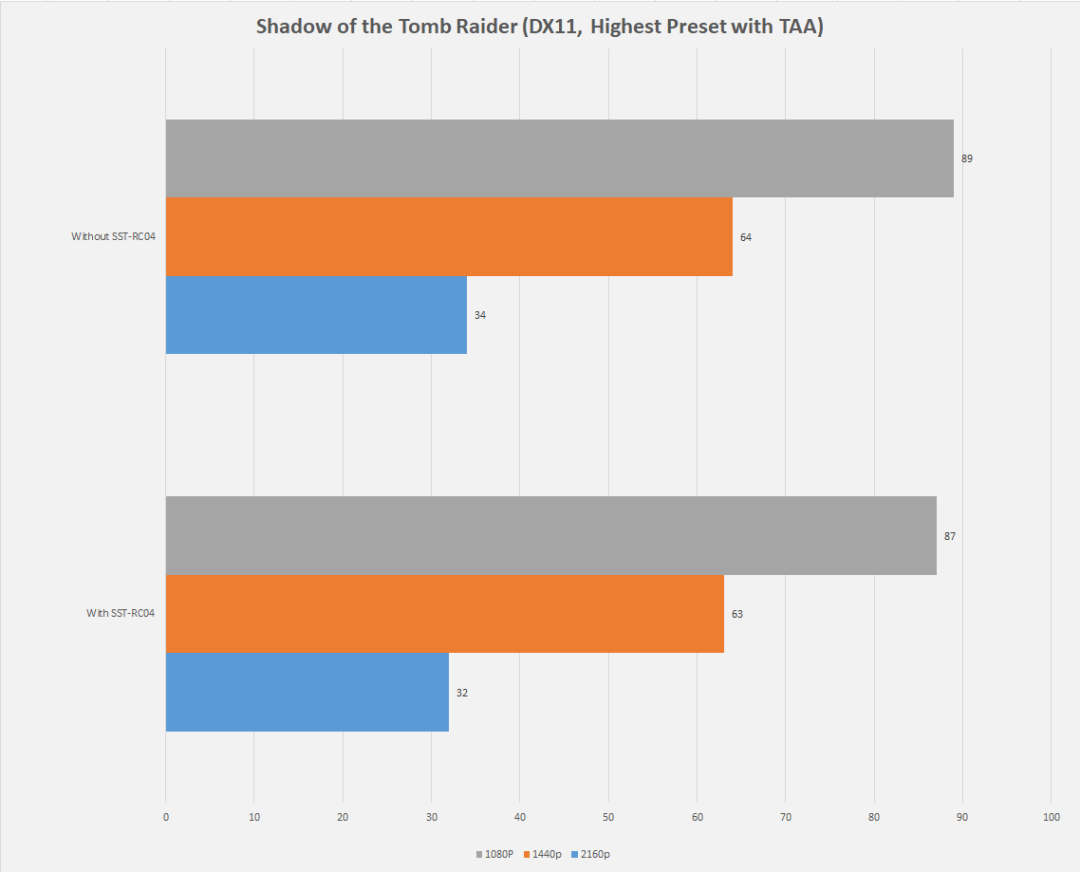 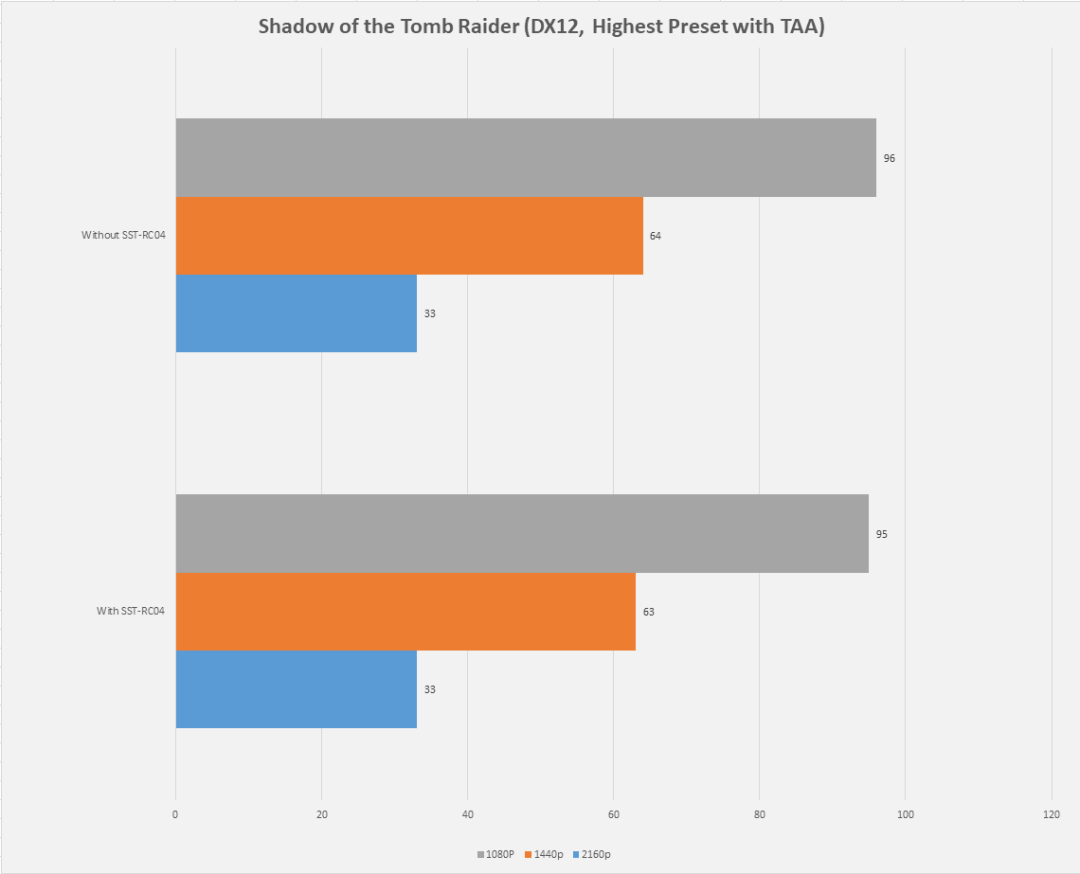 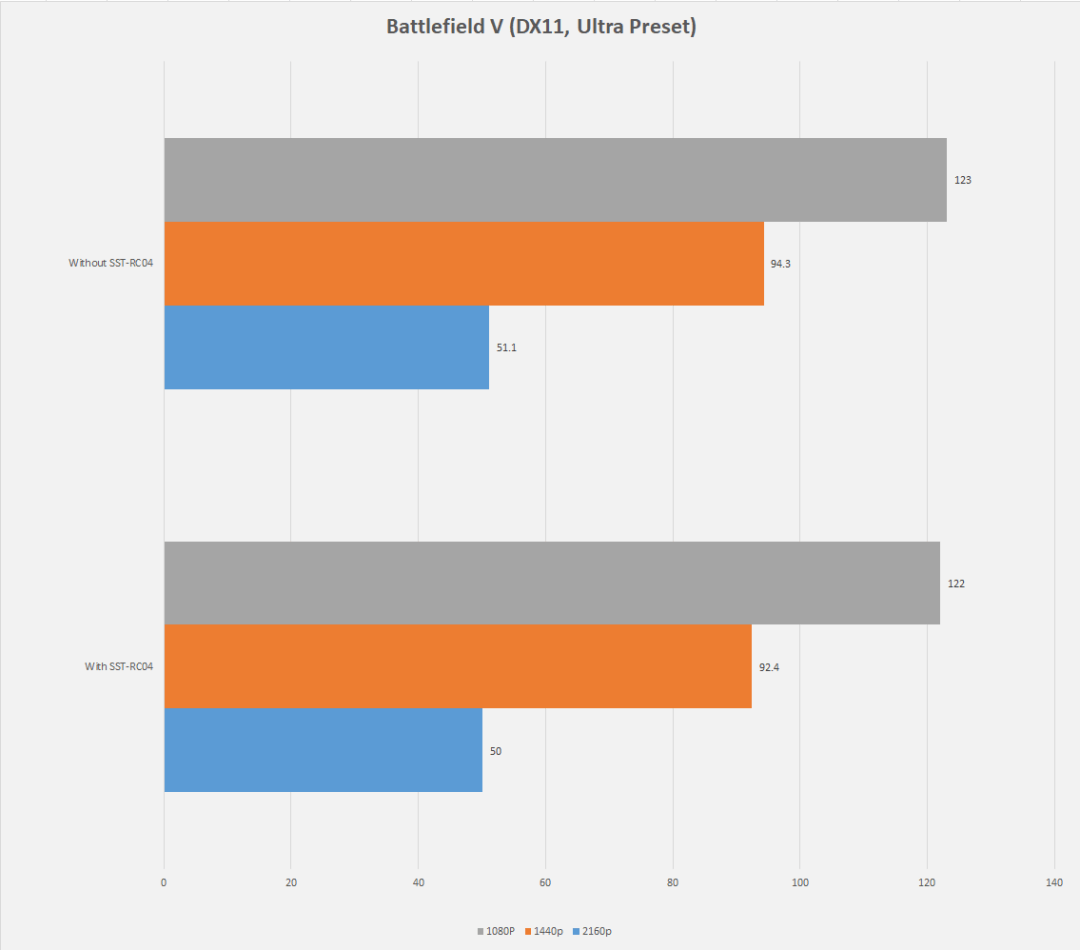 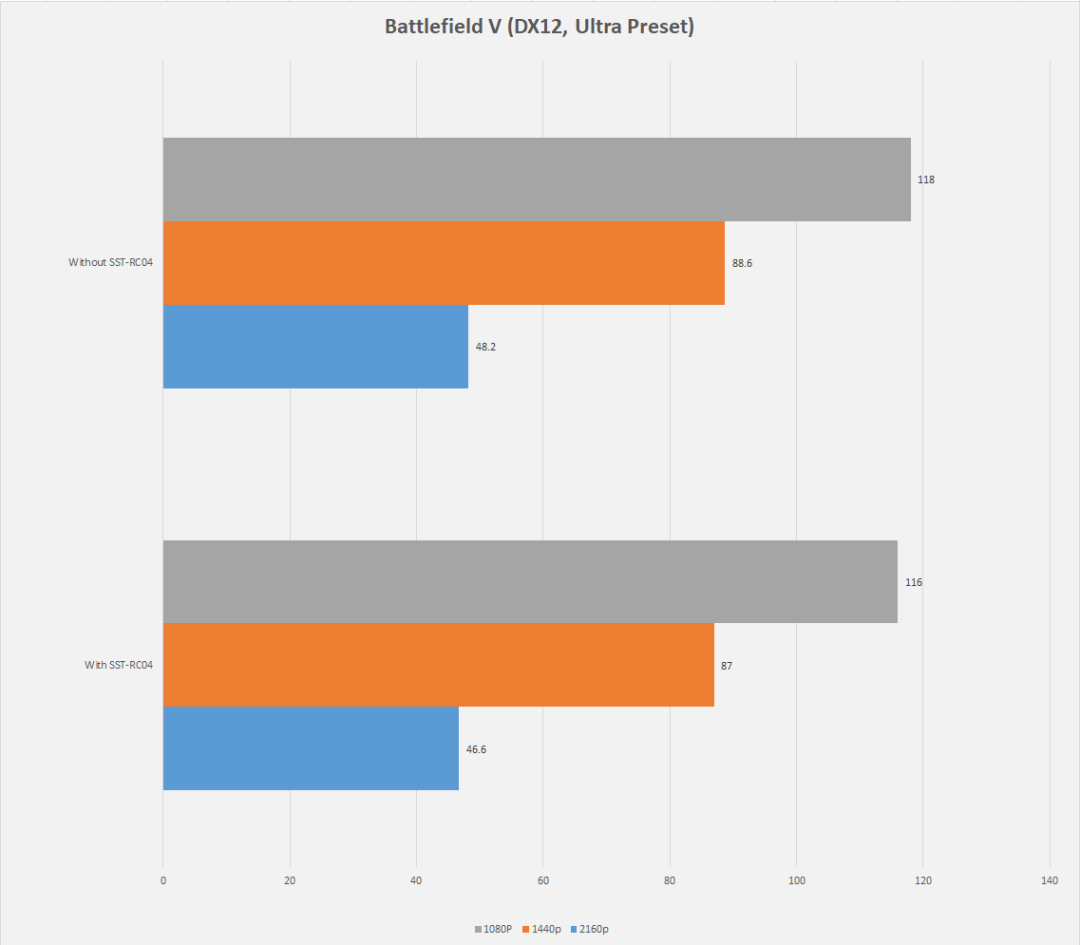 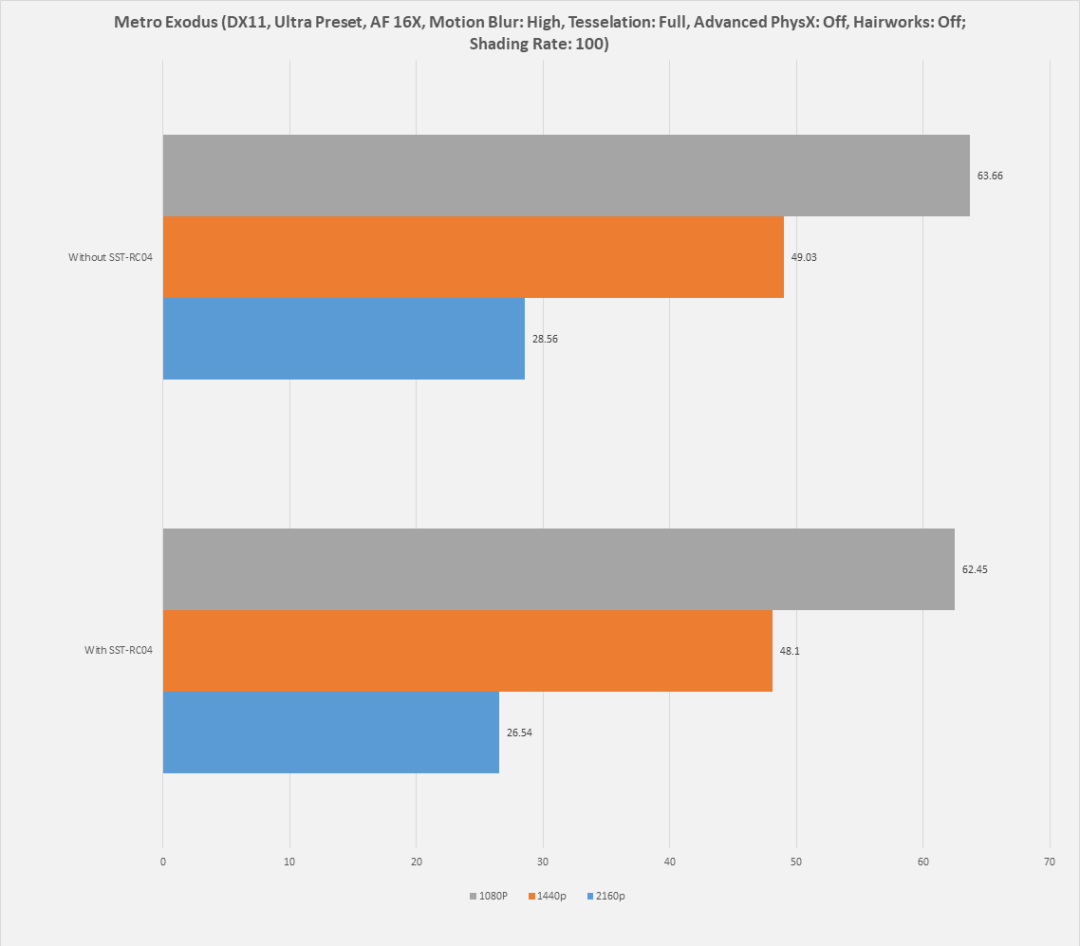 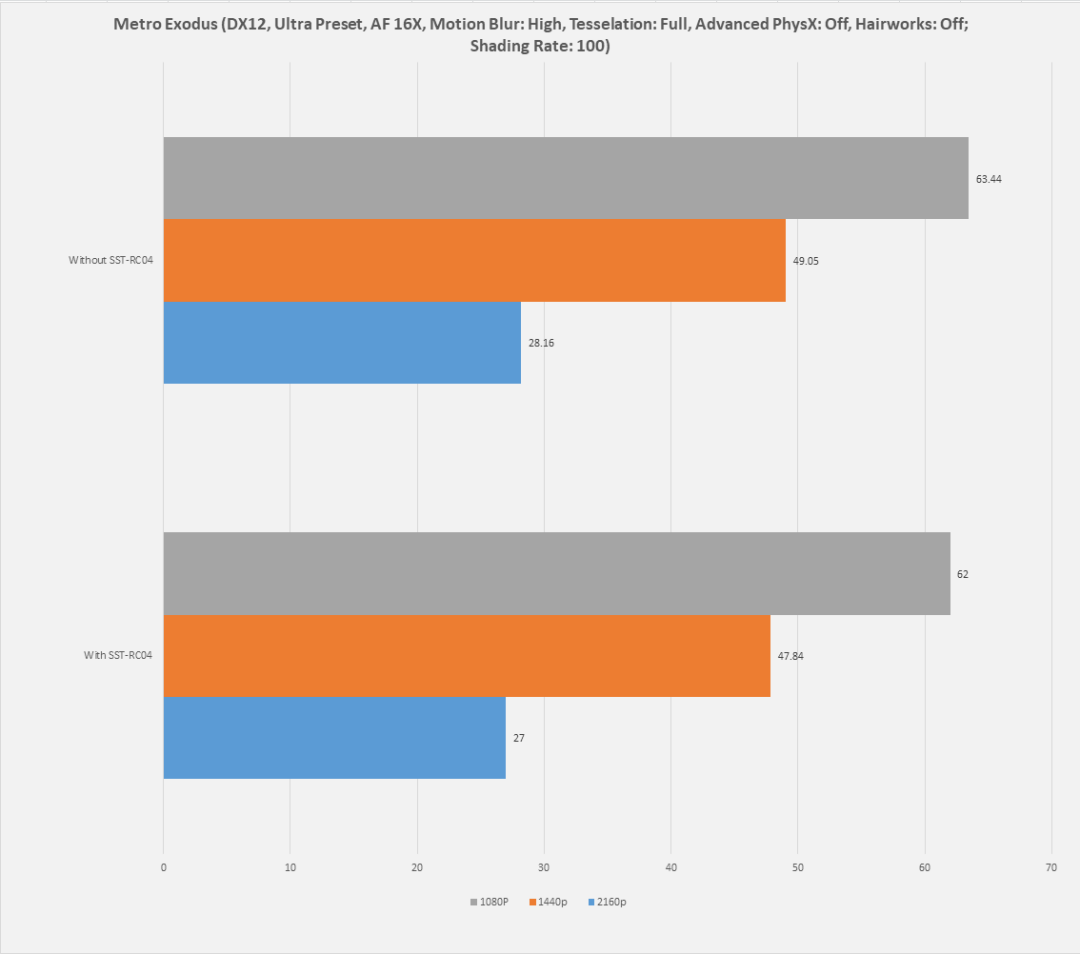 The SilverStone PP10 is a dual PSU adapter cable that would allow the user to connected two PSUs to a single motherboard with simultaneous starting that is turning one PSU on will turn on the second one as well. This is a solution aimed at the miners, gamers with multi-graphics cards setup or any other scenario requiring more than one PSU. The cable has two female connectors having fixed 24-pin configuration whereas a single male connector using 20+4-pin format is connected to the 24-pin ATX connector of the motherboard. I have tested the cable on the AMD test bench with Antec HCP 1300 and the SilverStone SX500-G PSUs. I would advise to run motherboard’s EPS and 24-pin ATX connections off a single PSU and use the other PSU for the graphics card(s) to avoid voltage offset. The length of the cable is 500+150mm.

The SilverStone RC04 is high-quality flexible ribbon riser cable which allows the user to connect the vertically installed graphics card to be connected to the motherboard’s PCIe slot conveniently. The dimension of this cable is 456mm (L) X  12mm (H) X 112mm (D). The cable is using PCIe 3.0 X16 interface so you are covered there as well. The length without connectors is 400mm which is quite excessive. This cable is flexible enough to allow up to 5 bends. The SilverStone primarily designed this cable for the PIO chassis. This cable will enable the PIO based chassis to also be compatible with Mini-ITX builds that require the installation of PCI Express expansion or graphics cards. The cable has EMI shielding and the build quality plus finishing is top notch. The PCIe slot on the cable has a slider lock. Once the graphics card is installed, moving the slider inwards will lock the graphics card and sliding it out will unlock the graphics card.

I have tested the riser cable inside the Thermaltake View 71 TG Chassis. Even for full tower 400mm is an excessive length to handle. I was able to handle the cable in with two bends which are hidden behind the GPU support bracket of the chassis. I have tested 4 games using the Nvidia GeForce GTX 1080 FE. The card was first installed directly on the motherboard on its first PCIe 3.0 x16 slot and all the selected games were benched. Then the graphics card was installed vertically on the GPU support bracket and SST-RC04 was used to connect the graphics card with the motherboard. Same games were benched again using the same settings. I have observed a bit of performance hit using the riser cable and this is not the first time it has happened. Tough in my opinion 1-2 FPS drop would not hurt any gaming performance of experience.

The PP10 is rated at $9.99/28 AED and the RC04 is listed at $64.98/316 AED at the time of the review. The price of the riser cable is a bit steep but its good build quality, EMI shielding, extreme flexibility, and 400mm length, it is worth it. Both the cables have performed well and come recommended by us.

We are thankful to SilverStoneTek for giving us the opportunity to review their PP10 and RC04 cables. 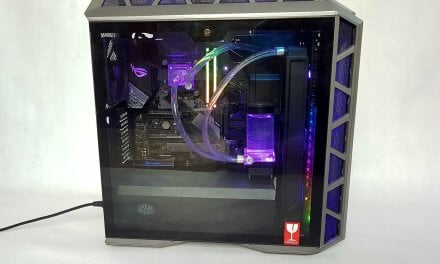 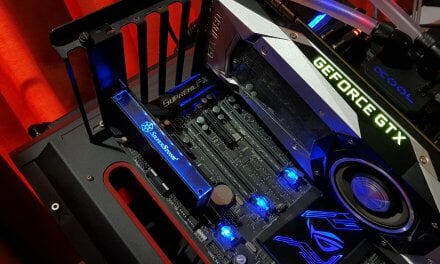 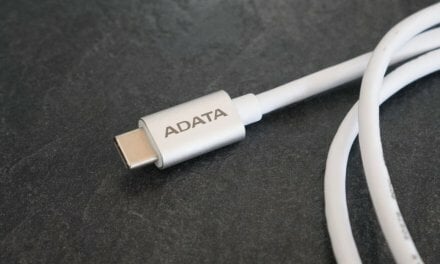 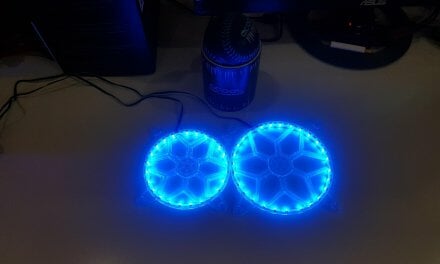